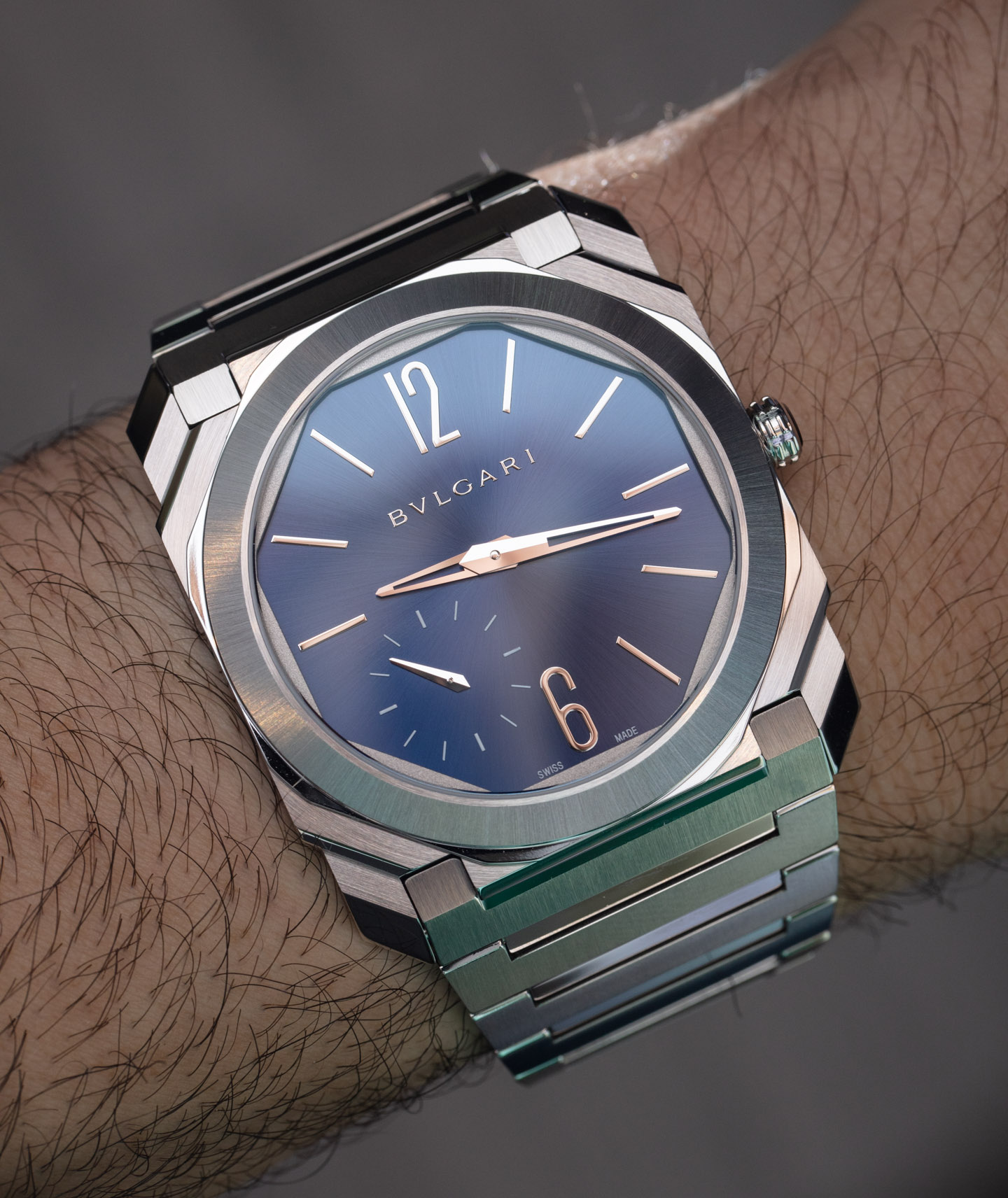 BVLGARI’s Octo Finissimo collection size is growing just as rapidly as its popularity among enthusiasts. To think that a decade ago, the Gerald Genta Octo family was just seen as another of Genta’s weirder modern watches out there. Then BVLGARI (who acquired the Gerald Genta brand a while back), set out to make the Octo sexier and more mainstream — which led the brand down a path of products that eventually led to this ultra-thin Octo watch with an incredibly cool automatic movement. This reference 103431 Octo Finissimo watch was debuted in early 2020 and sports a steel case with matching bracelet, and a chic metallic-blue dial.

aBlogtoWatch introduced the BVLGARI Octo Finissimo steel watch here, and later did a hands-on first look at the reference 103297, which is this same watch but with a black dial. The Octo Finissimo Automatic started as a limited edition in 2019 but in a sandblasted titanium case, which most Octo Finissimo watches have been rendered as to this point. While titanium is a slick material for such a svelete watch, only in polished and brushed steel (“satin-polished,” as BVLGARI calls the finishing, though I suppose you could also finish gold or titanium that way), do the various interesting angles and shapes of the complex Octo case shine through for the wearer. While thin and out of the way on your wrist, the broad and bold appeal of the Octo Finissimo is unlike anything else on the market. It is a loud watch, but that’s good because there are plenty of loud people out there that a timepiece such as this complements rather well. 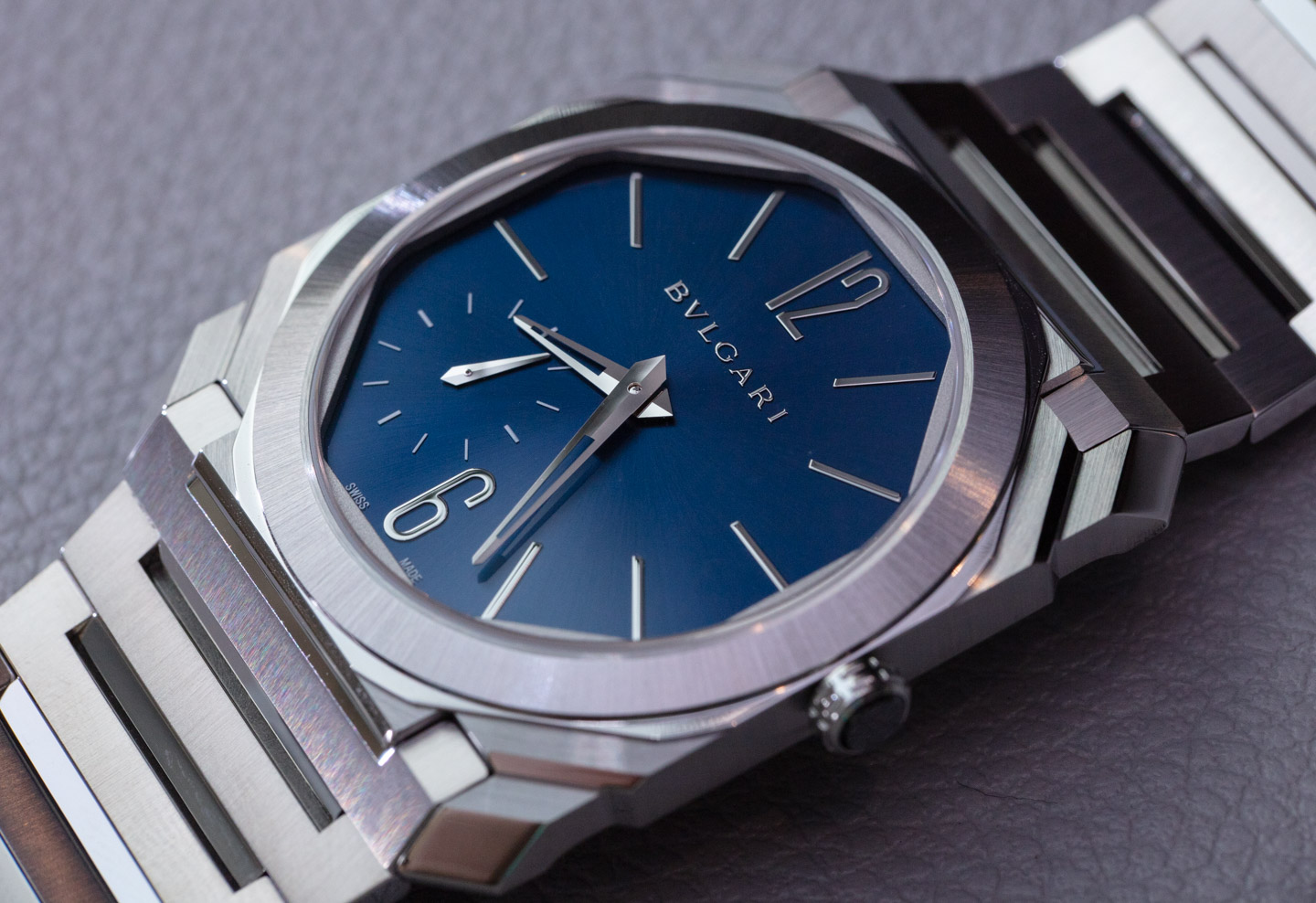 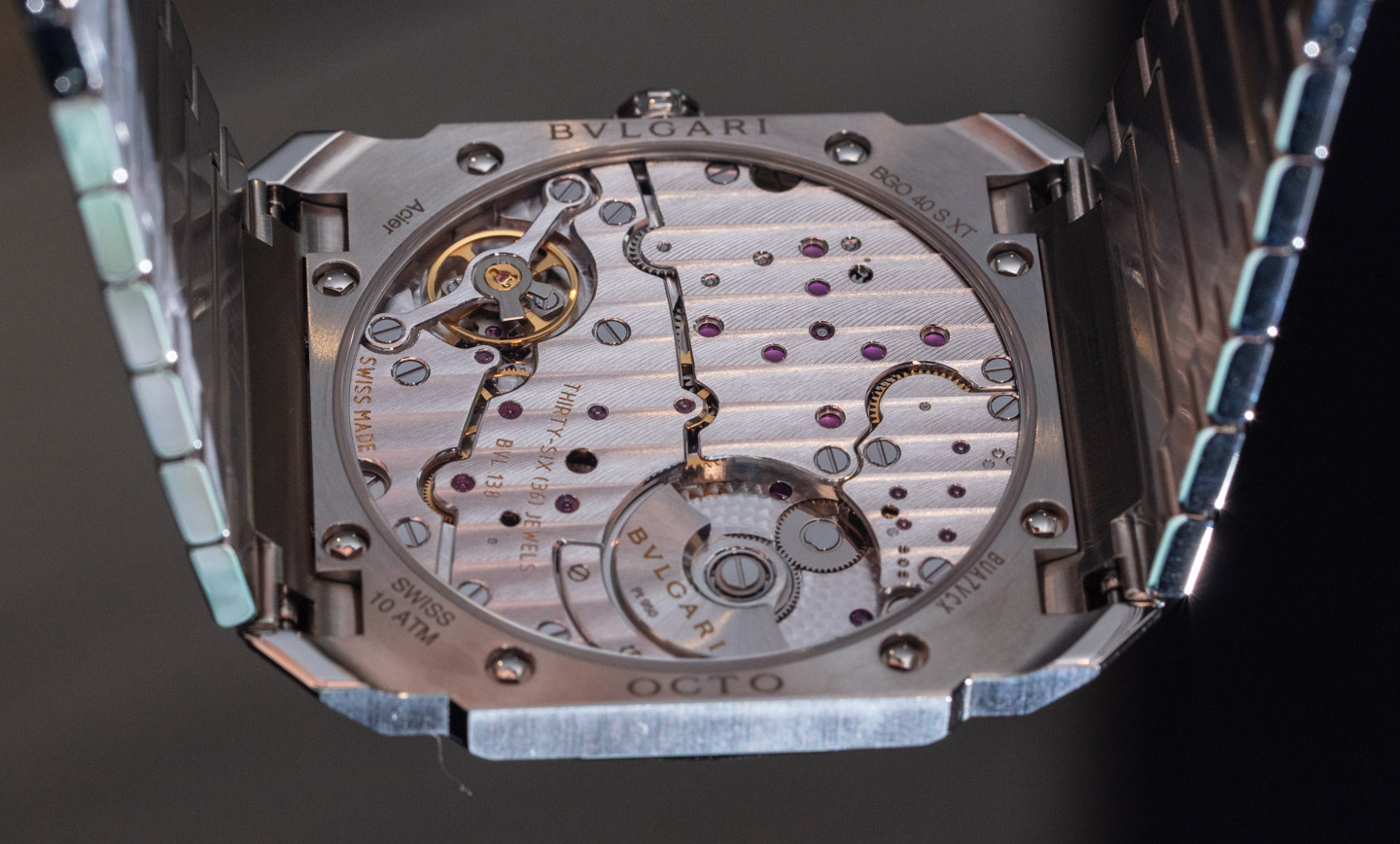 The steel version of the Octo Finissimo is where I believe BVLGARI (Bulgari) upped the water resistance rating to 100 meters. For the Octo, “sporty” probably means anything on pavement, as this is a designer’s watch with socialization in mind much more than what you might call an “activity watch.” That said, consumers today have made it abundantly clear to watch companies that they want their jewelry watches to be something that can be easily worn on a daily basis. For that to be realistic, men’s jewelry timepieces like the Octo Finissimo Automatic also need to have a requisite level of durability.

My only complaint about the Octo Finissimo over the years more or less remains unchanged, and it doesn’t actually apply to all models. I actually WANT this to be more of a sports watch — and by that I mean I want the dial to be just a bit more legible in more lighting conditions. The polished hands on the high-sheen dial aren’t exactly a paradigm of non-glaring, high-contrast dial materials. While BVLGARI did make the Octo Finissimo dial elegant, there are instances when the hands can blend into the dial a bit much for a tool-watch lover’s tastes. That wouldn’t stop me from wearing an Octo Finissimo, but it does limit the situations in which you might wear it. 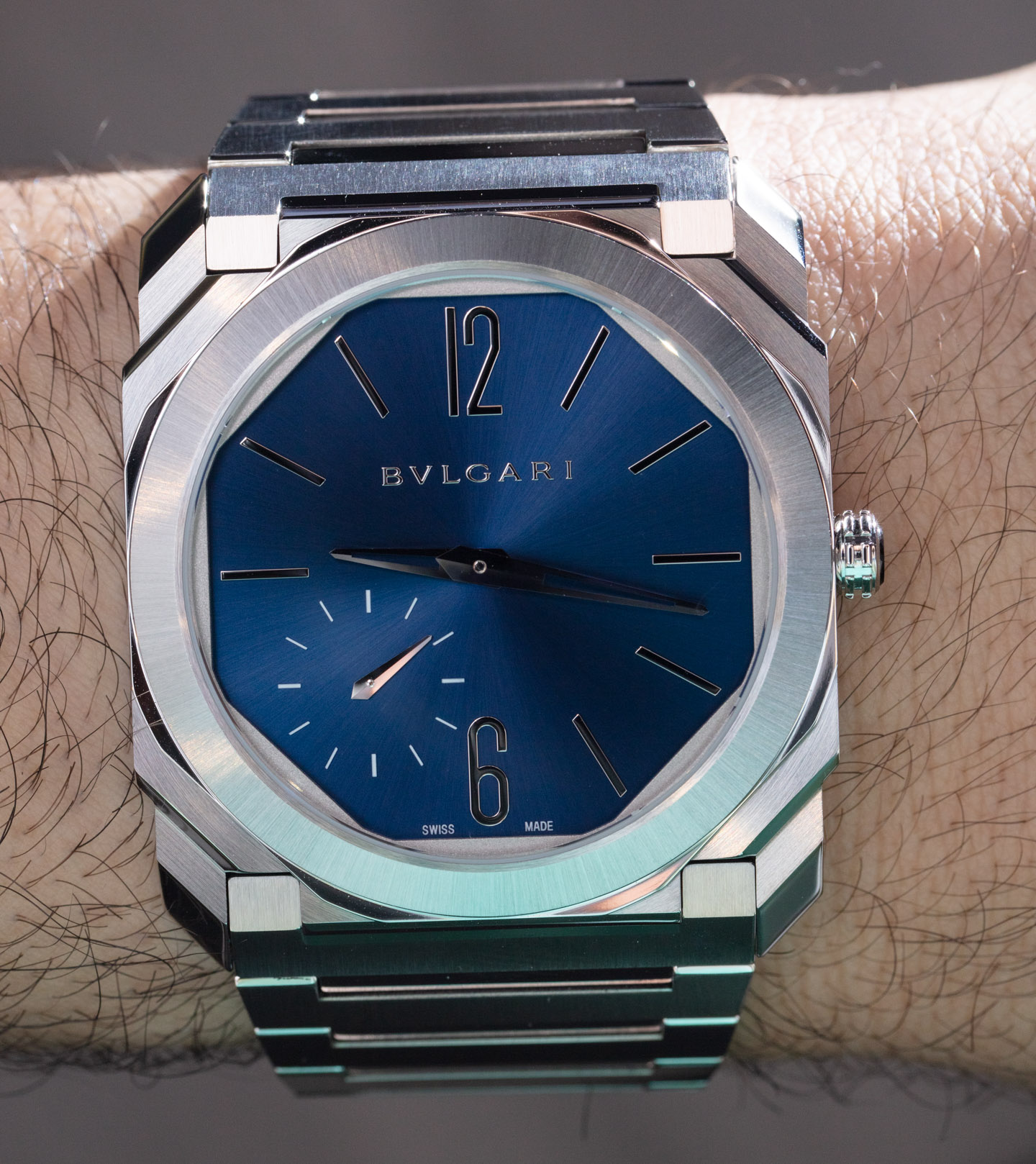 How thin is the Finissimo watch? For BVLGARI, “thin” means a case that is 6.4m thick. The 40mm-wide square case is wafer-like on the wrist. The lugs help the watch stay put on the top of your wrist, which is an important design element, in my opinion. Over the dial and movement are flat AR-coated sapphire crystals. Given that the watch is water-resistant to 100 meters, the crown now also screws down.

Much, if not all, of this watch is made in-house. The movement is proudly made by BVLGARI at its Swiss facility in Neuchâtel. The dial is also made in-house at the BVLGARI dial factory in Switzerland. While the company’s overall HQ is in Rome (though it is owned by the LVMH luxury group out of France), the watch division and its component suppliers are in Switzerland, where most of LMVH’s watches are produced by its respective brands. 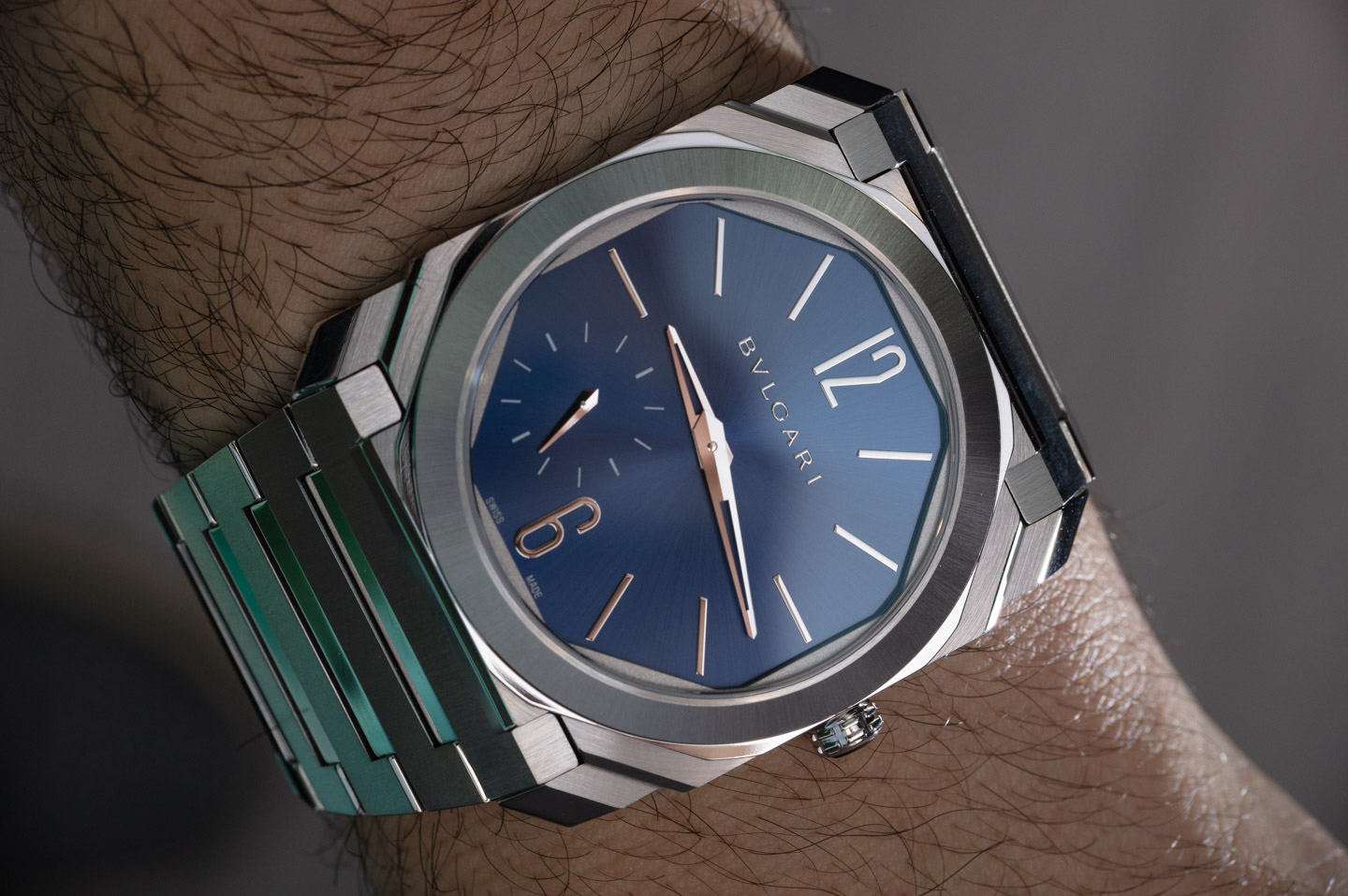 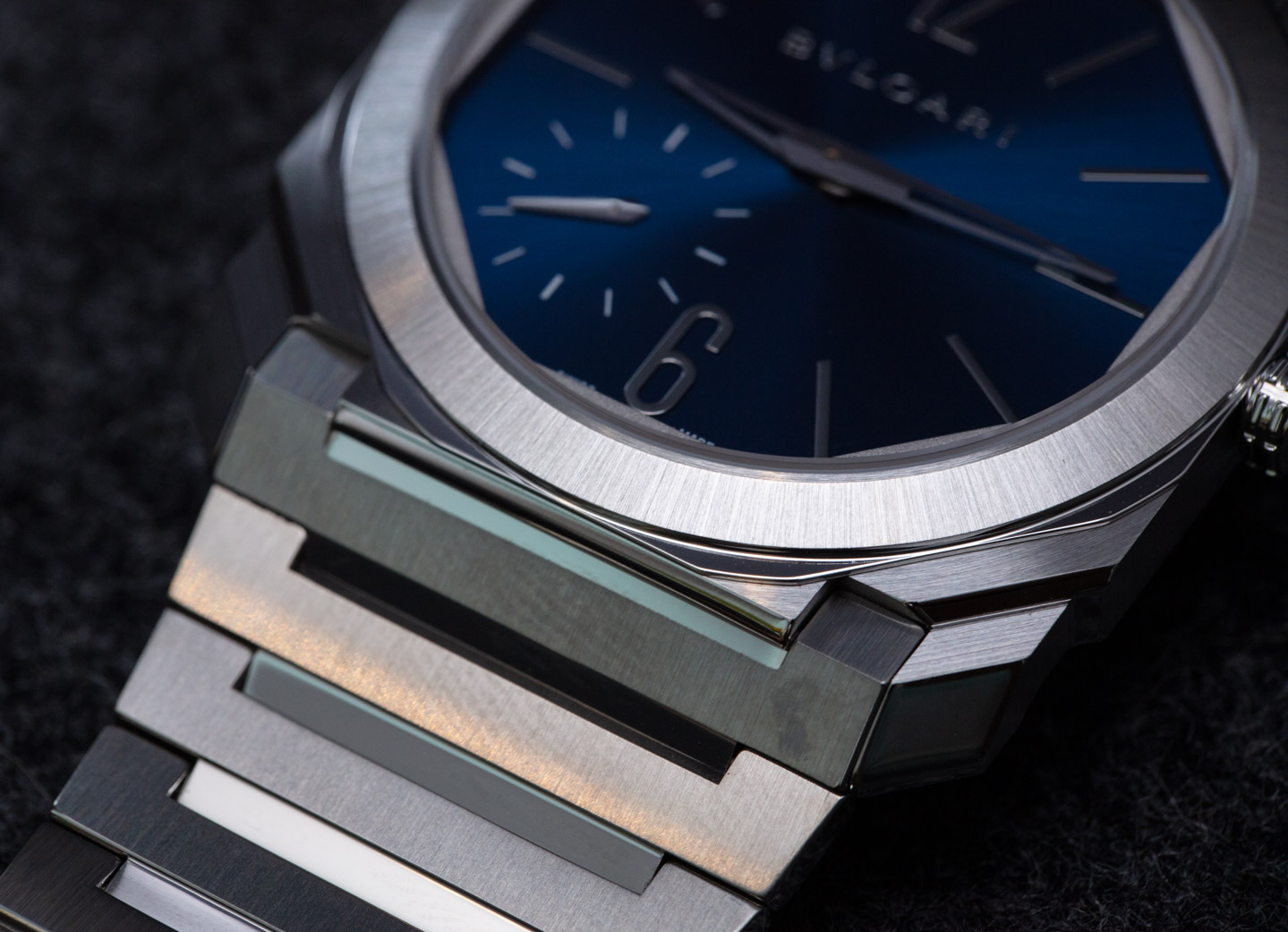 Inside the watch is the very visually appealing BVLGARI caliber BVL 138 automatic movement. The movement is able to be so thin because it is so broad. That means the movement engineers are able to put things on the same plane, as opposed to having to stack them over each other in a more crowded space. You can see, for example, that the automatic micro-rotor (produced from solid platinum on account of the precious metal’s heavy weight) never even goes near the oscillating balance wheel, whereas in most mechanical movements, these elements would overlap one another. The movement is very nicely decorated and a treat to look at through the rear of the watch. It operates at 3Hz and has about 60 hours of power reserve. Functions include just the time with an off-centered subsidiary seconds dial. 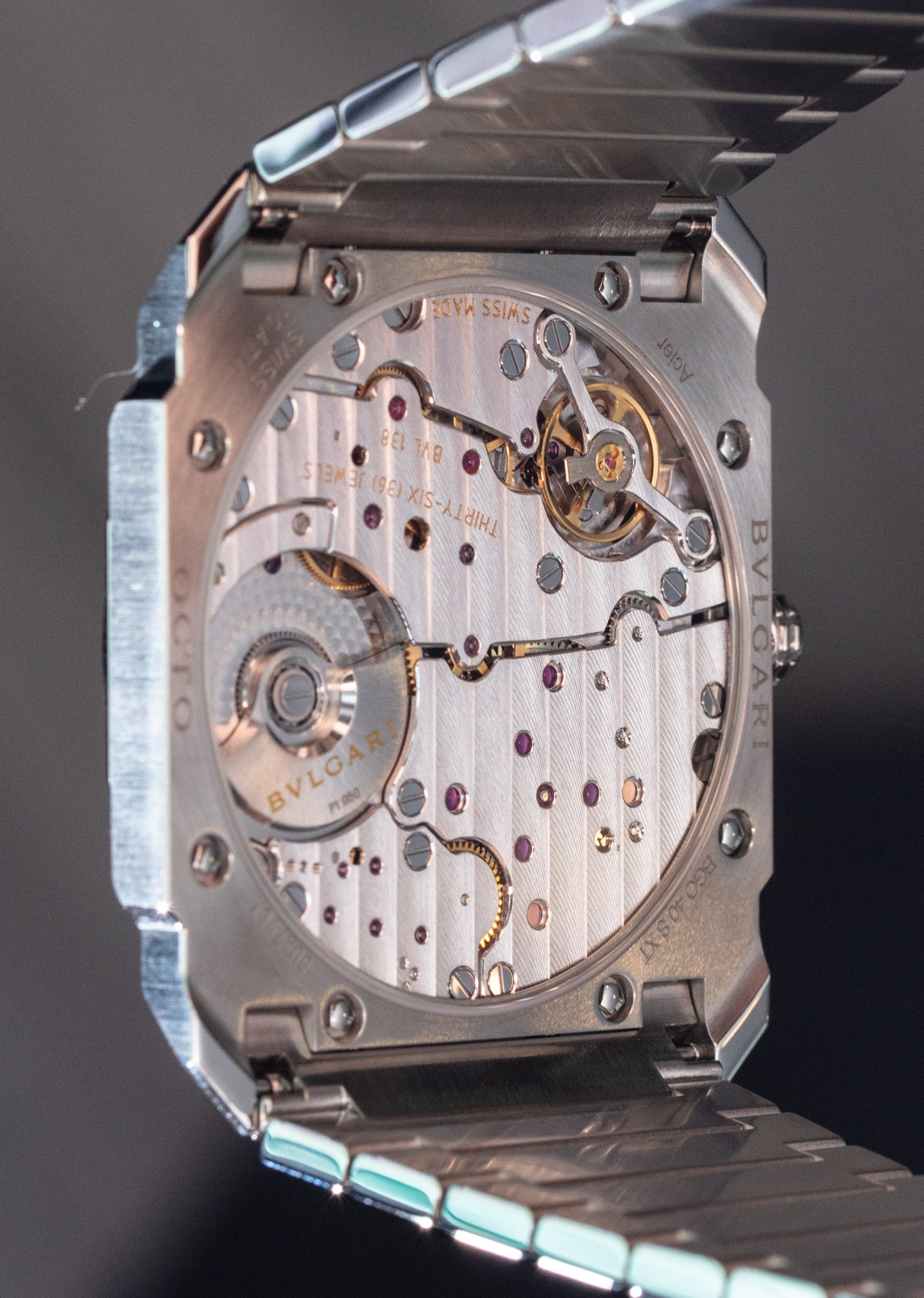 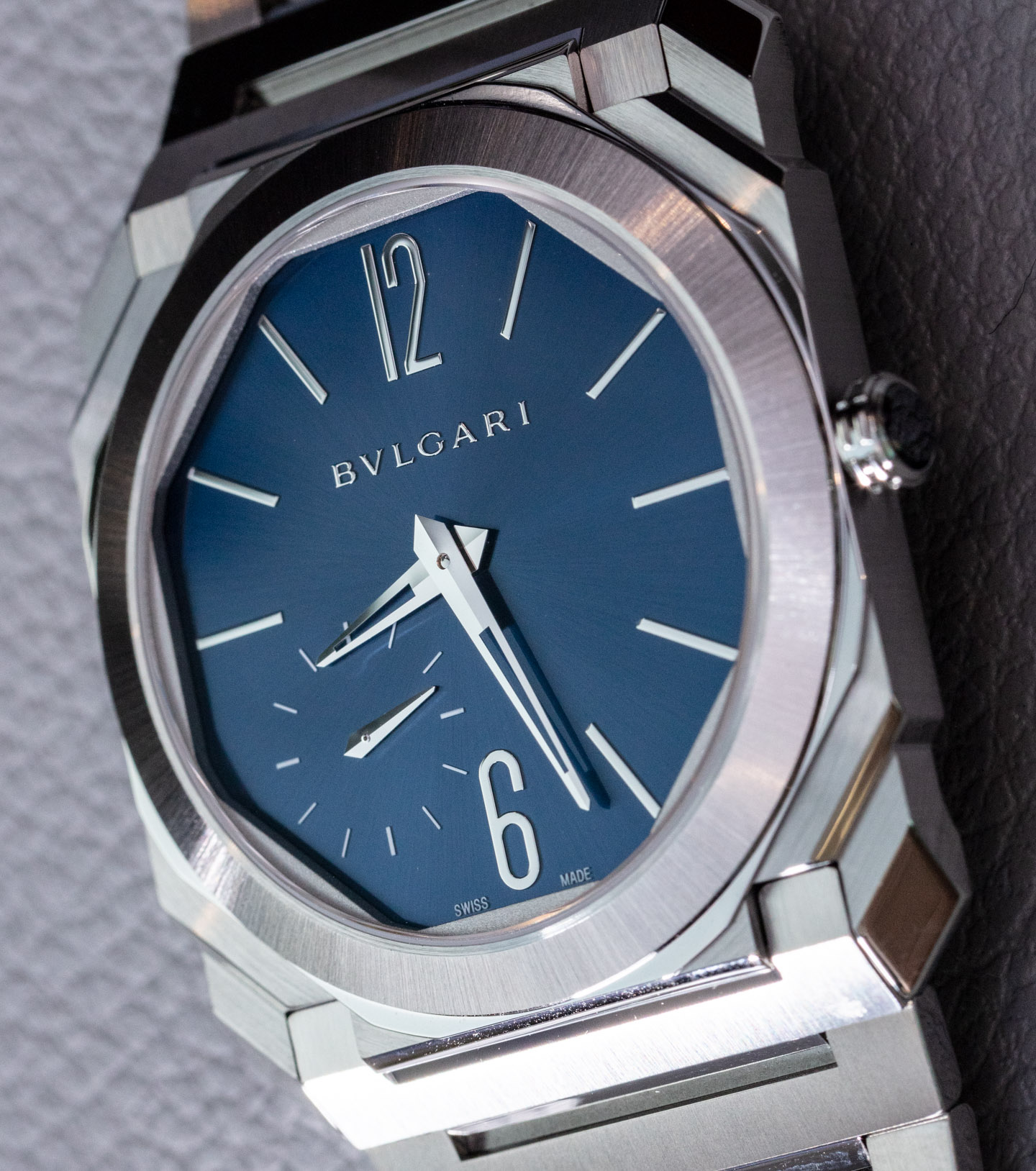 The BVLGARI Octo Finissimo’s bracelet is just as impressive as the movement in my opinion. It looks so interesting and attention-getting on the wrist. Effortlessly masculine, it still has polished surfaces that flirt with the light. The bracelet enclosure system is also impressively compact, allowing for the butterfly-style tension deployant to be more or less flush with the rest of the bracelet construction while not appreciably creating extra bulk.

Buying an Octo Finissimo Automatic watch is actually less costly than much of the competition in the “high-end steel integrated bracelet watch” space, but it is still a pricey proposition at over $10,000. It does have an impressive and exclusive movement, and the overall design and quality of the watch do meet the retail cost. BVLGARI has made a lot of people happy with the Octo, but I still think it is a wild-looking watch for some conservative tastes. In a few more years, I think the Octo Finissimo will be more generally agreed-on as a “sensible” watch. Until now, this Italian-Swiss exotic watch can be for the slightly brave. Price for the blue lacquer-dialed steel-cased BVLGARI Octo Finissmo Automatic reference 103431 is $11,900 USD. Learn more at the BVLGARI website here.