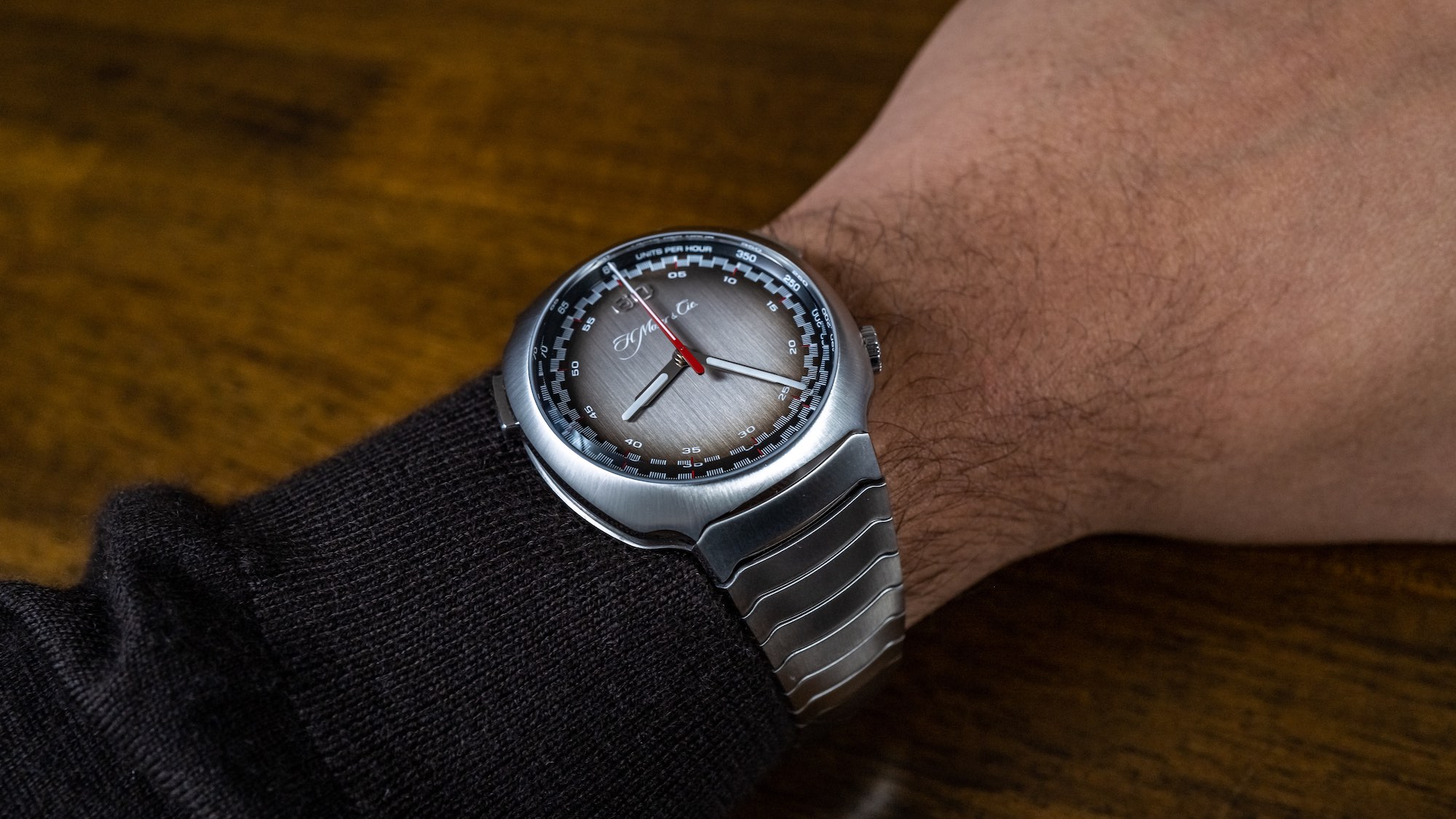 Just debuted by H. Moser & Cie is the Streamliner Flyback Chronograph Automatic watch, a brand new steel watch featuring — you guessed it — an integrated bracelet. Having handled and spent a long weekend with the Streamliner a few weeks ago, I was left highly impressed by the quality and comfort of the bracelet, and charmed by the retro aesthetic that still feels uniquely Moser. While the Streamliner Flyback Chronograph will be limited to 100 pieces, this is the inaugural watch from this brand new collection, so it’s safe to say we can expect this bracelet and case to make its way to pieces in the future. Just about everything about the Streamliner Flyback is new for Moser, but it also boasts a watchmaking first by being an automatic flyback chronograph that exclusively uses central hands. That’s functionally impressive minimalism at its best. 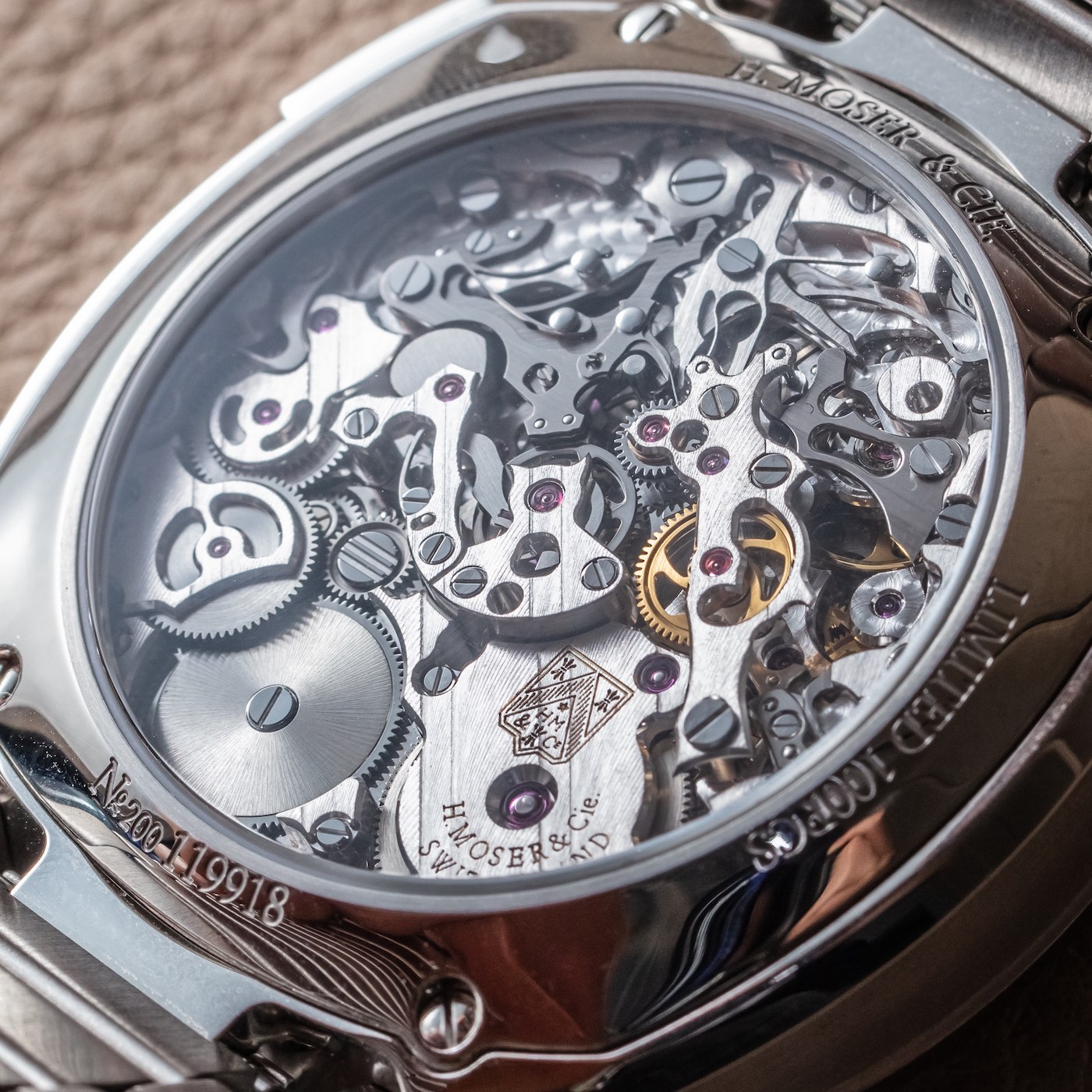 Before getting to the bracelet, case, and design, I want to discuss the new new Calibre HMC 902, which was developed by Agenhor with support from the Moser team. A totally new flyback chronograph movement, the HMC 902 turns the complication on its head and into a minimalist success by having both a central seconds and minutes hand. Using a retrograde system, the chronograph minute hand jumps instantly for very accurate timekeeping. The HMC 902 is a double barrel, column-wheel flyback chronograph made of 434 components and 55 jewels and features Agenhor’s lateral friction clutch and “Tulip yoke.” It operates at 21,600 vph and has a 54-hour power reserve, as well. Agenhor also moved the tungsten oscillating weight between the movement and the dial so the view of the movement is wholly unobstructed. 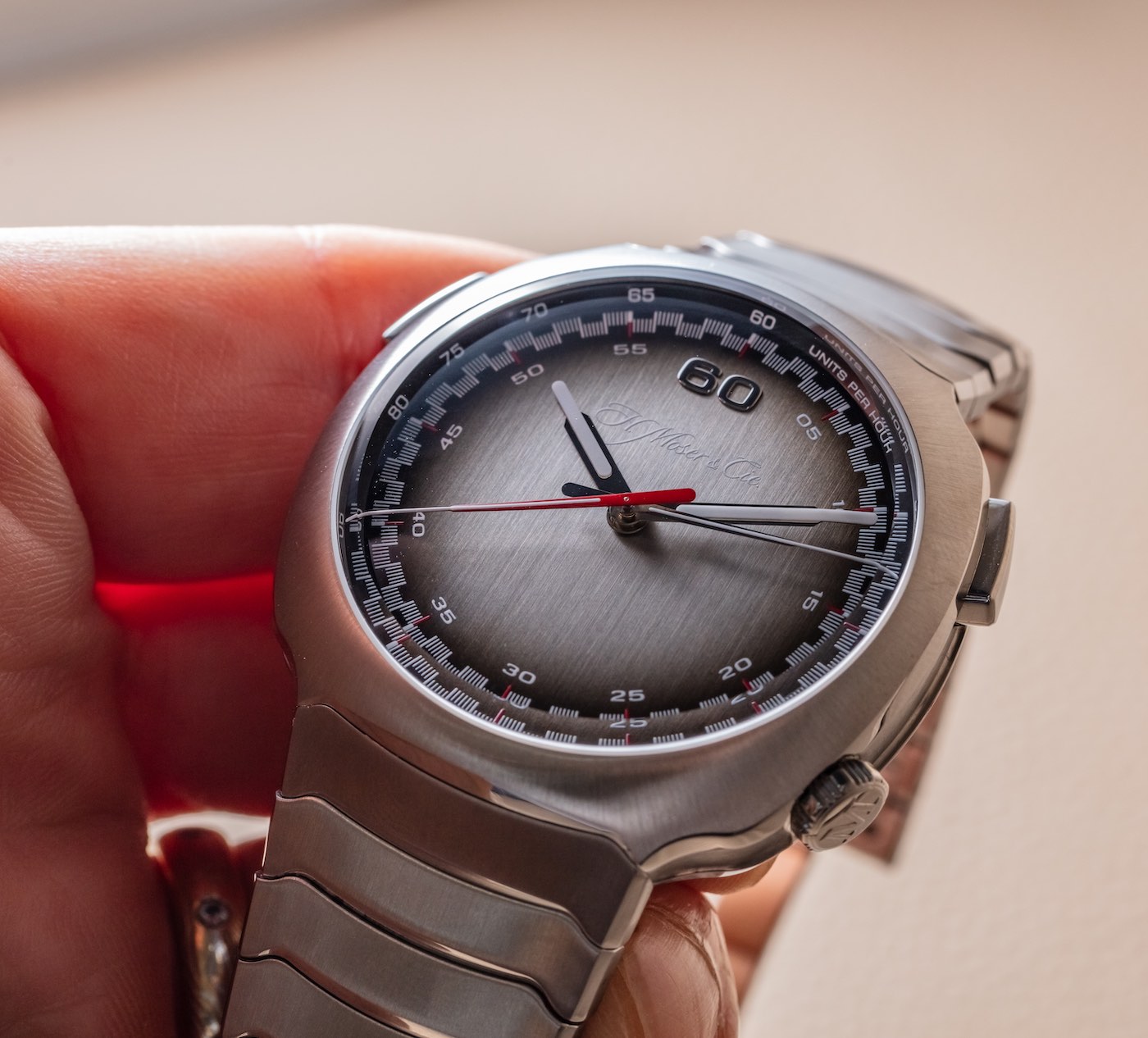 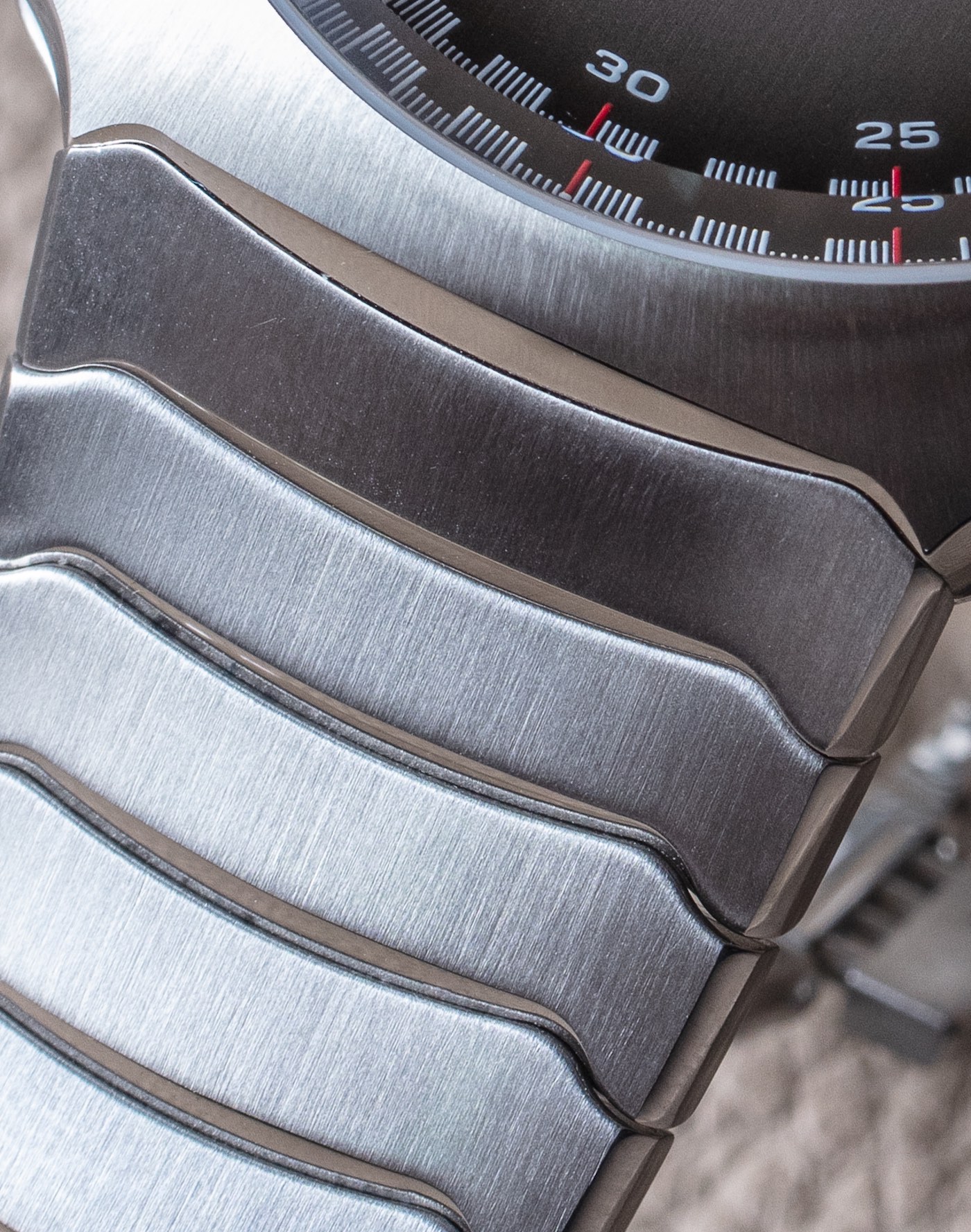 According to Moser, development on what would become the Streamliner began five years ago. I am not sure if they had such a curved and clean case with integrated bracelet in mind, but I won’t complain because I was smitten with the end product. That said, like most everything Moser does, I can see it not being to everyone’s taste. Edouard Meylan, the CEO of H. Moser & Cie, describes the concept as such:

“We started with the bracelet, comfortable, elegant and different. We then designed this model around the chronograph function, as this was what we really wanted to highlight. The Streamliner is a chronograph which displays the time rather than a watch which features a chronograph. We preferred understatement, ergonomics, and legibility, opting for a central display with no sub dial: perfectly matching our minimalist philosophy.”

As the Streamliner was actually designed around the bracelet, I’m sure you’re wondering if it actually lives up to Moser’s hype, especially considering that we are currently living in an integrated bracelet arms race. 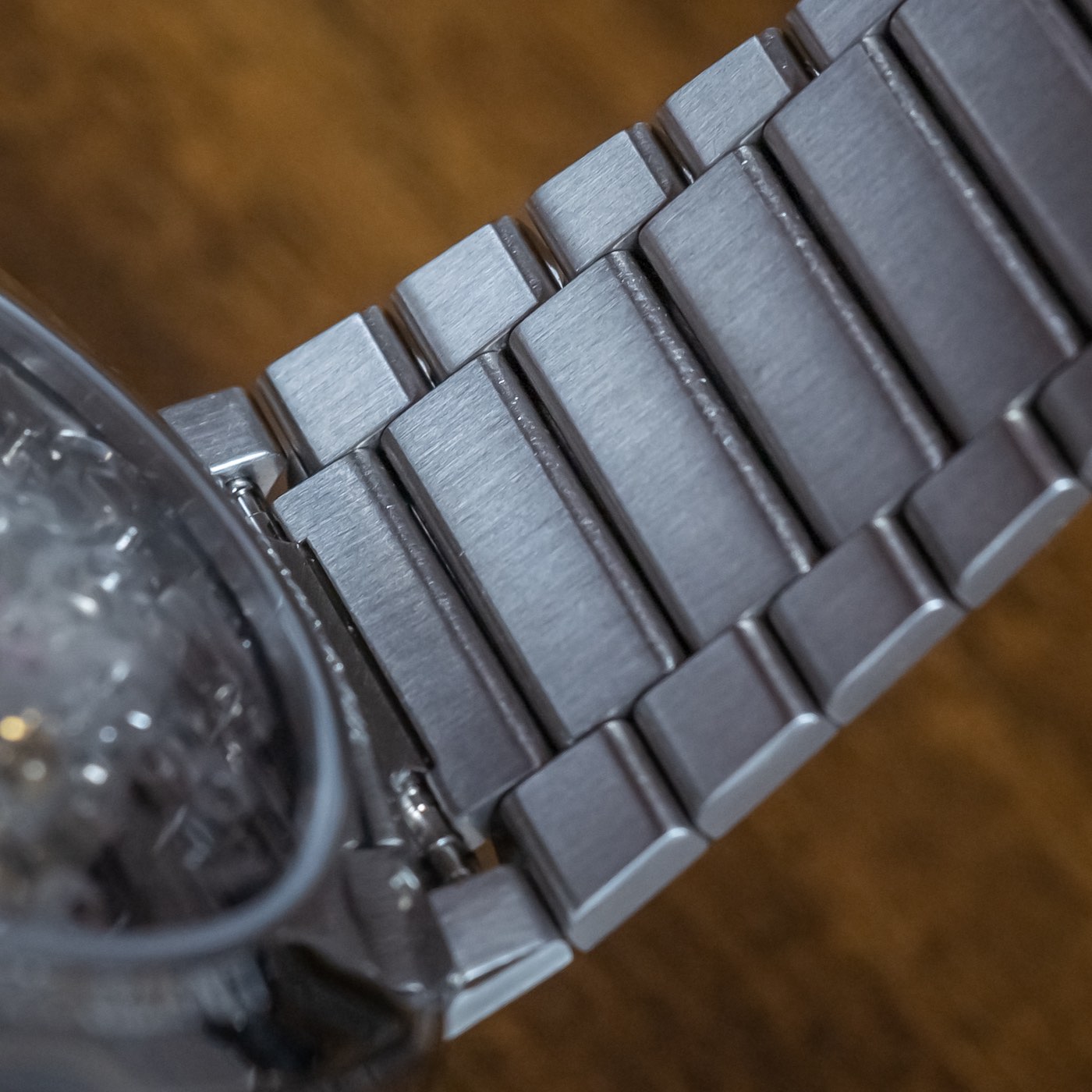 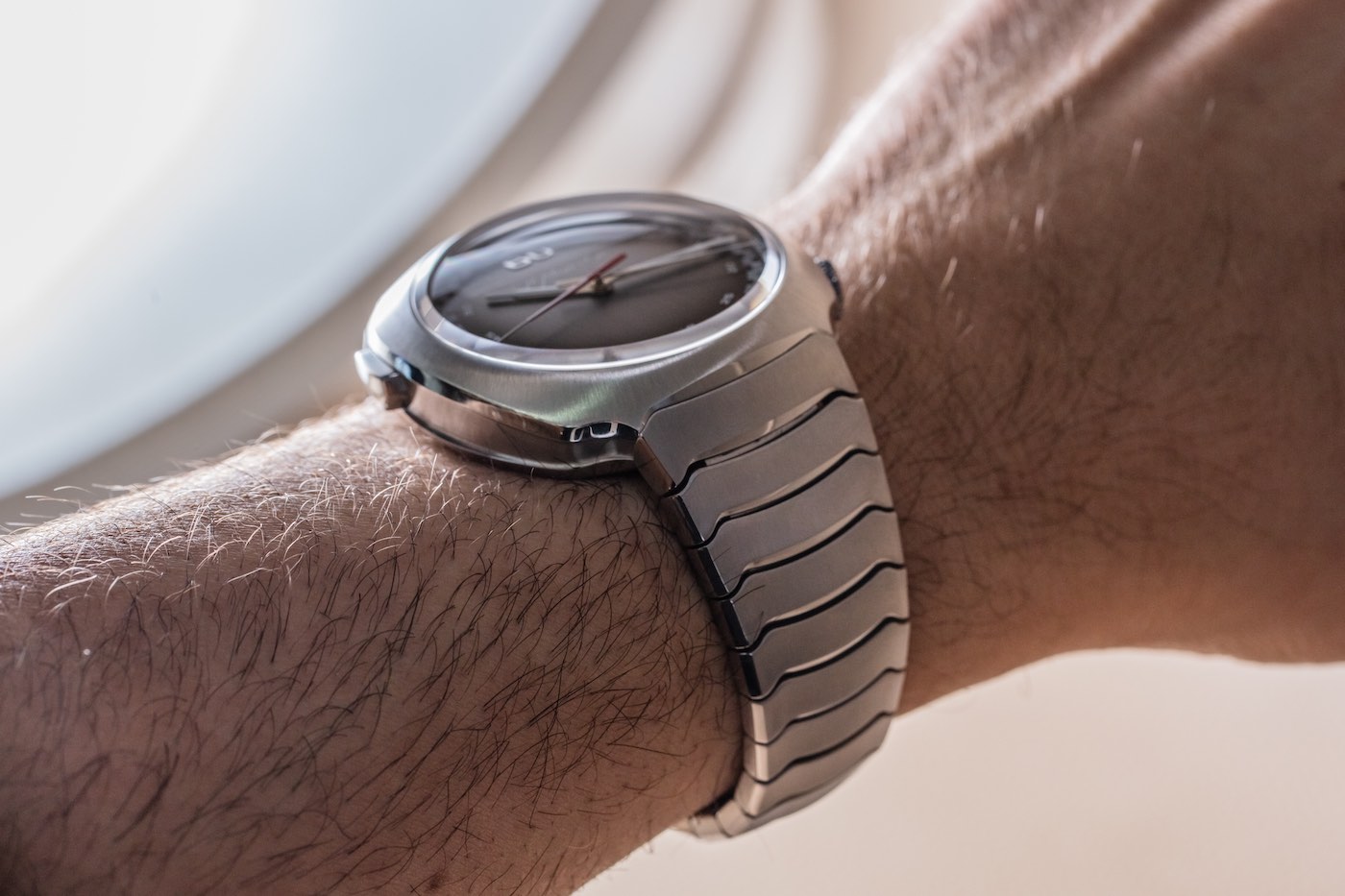 The links of the bracelet really do resemble architectural fish scales when looking at their shape and how they taper down from the case. The wearing experience is highly comfortable and each of the articulated links allows for necessary contouring while not feeling too tight. Arm hair-tugging wasn’t an issue, either. 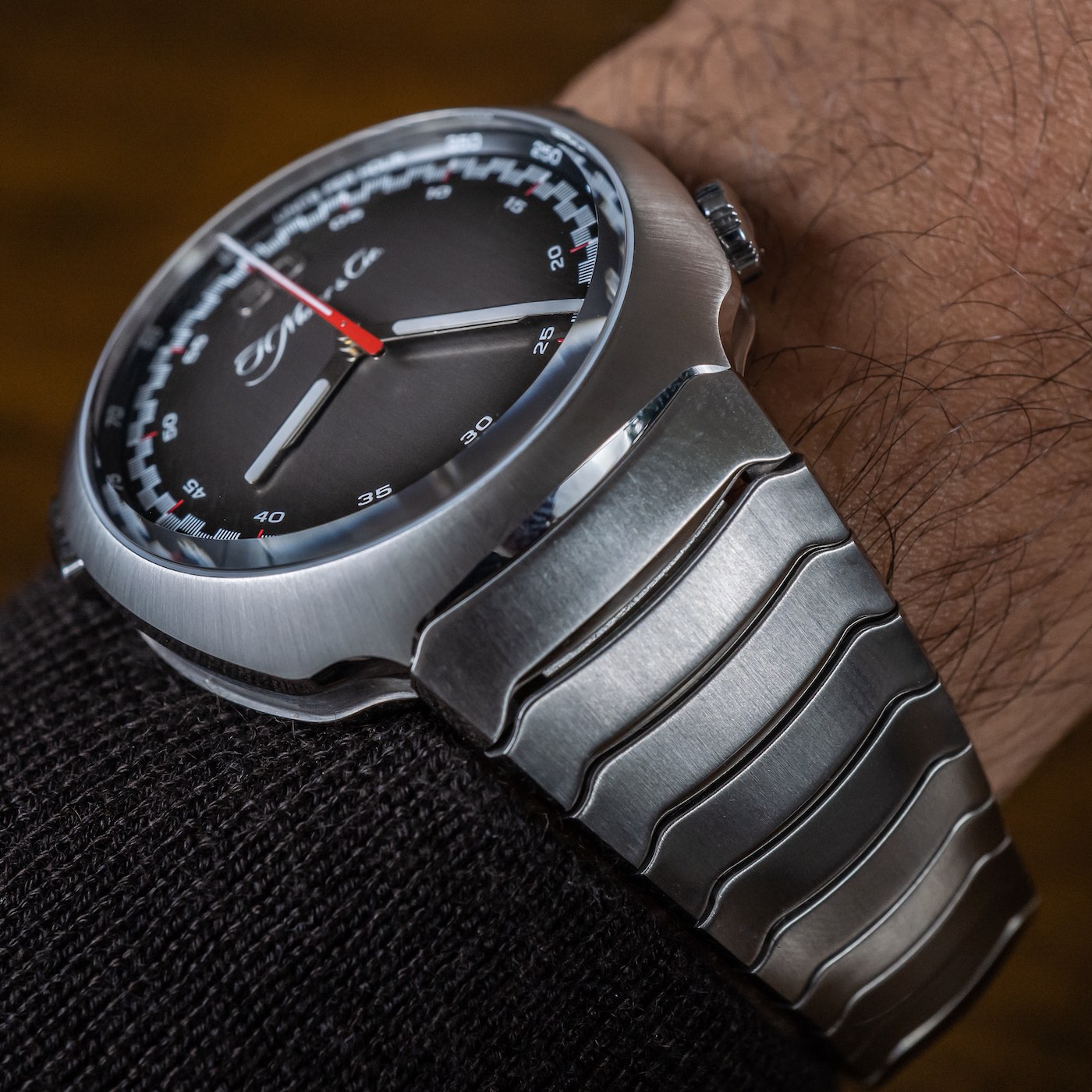 Everything about the bracelet seems to have the objective of seamlessness, beginning with the barely-there lugs and trickling all the way down to the folding clasp that’s adorned with the M logo. The articulating links allow for a comfort fit that’s as good as it gets, while the front of the links look totally clean and natural. Artistic, form-fitting, and immaculately done, the bracelet of the Streamliner Flyback executes a vision as well as any brand out there could. 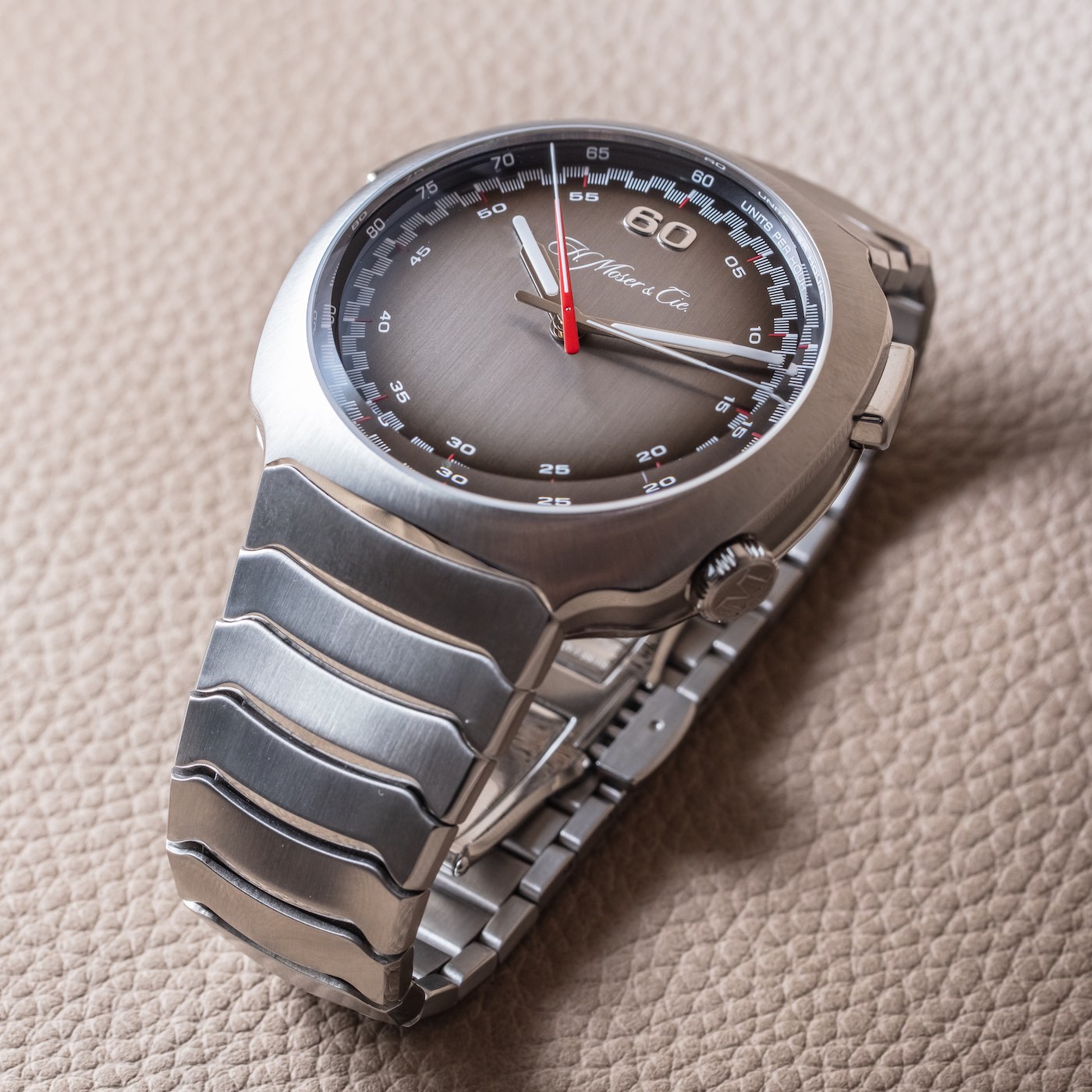 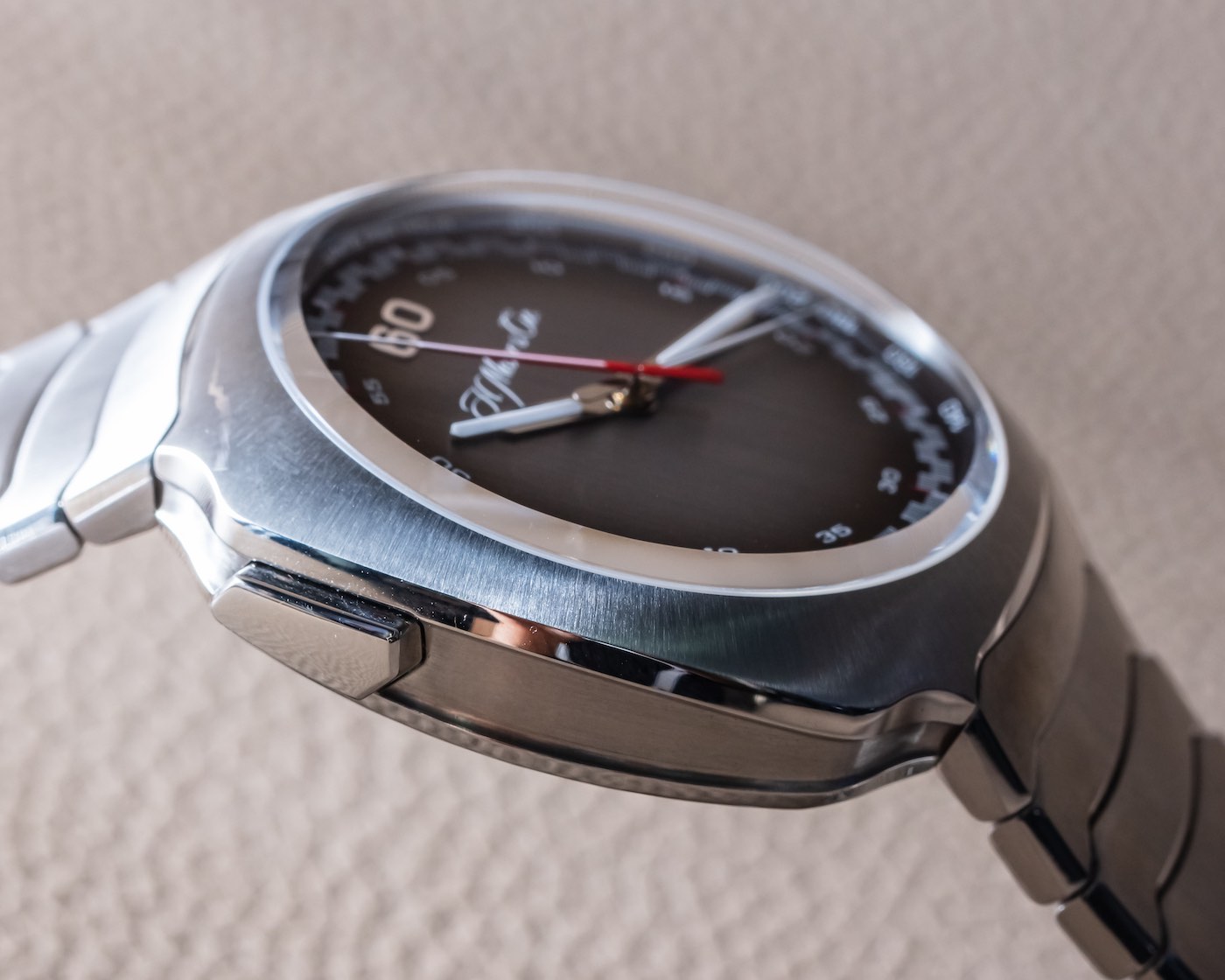 As for the cushion-shaped case, it measures 42.3mm-wide and 14.2mm-thick. The chronograph pushers. are at 10 and 2 o’clock, while the crown is down by 4 o’clock. This lends the case some slight asymmetry, which I think was necessary when you consider how symmetrical and minimal the dial is. There’s a mid-century UFO vibe to the case and bracelet that I’m really into, and the 1960s racing chronograph-inspired tachymeter and minute track tie the knot very neatly. It’s funny that there is such a strong mid-century aesthetic and identity to a watch named after trains from the 1920s and 1930s, but there you have it. 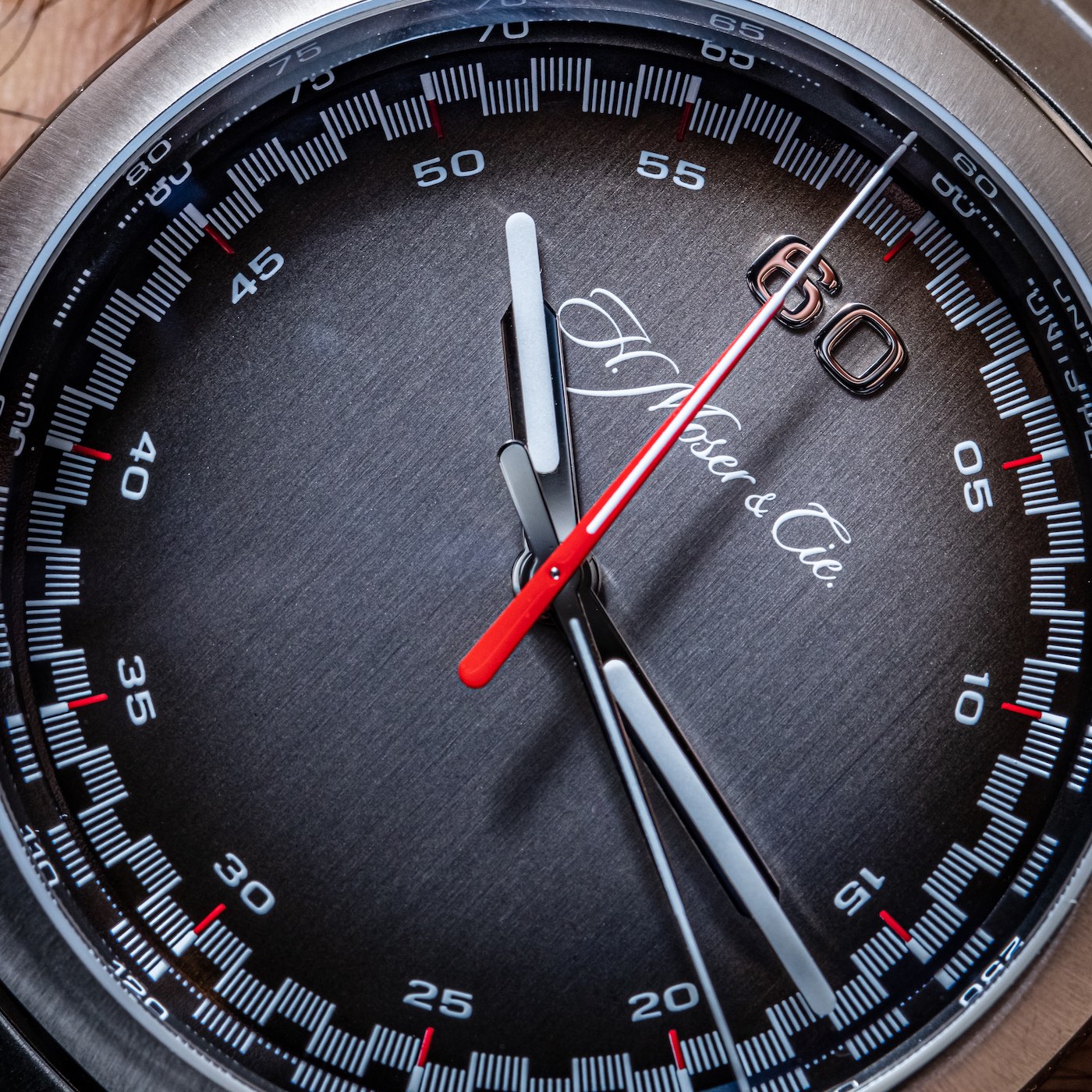 While the dial may be minimal, it’s got a bunch of noteworthy components. First off is the fumé dial, which has a new anthracite gray color to it. Around the outer circumference of the dial are two tracks done in white and red. The outermost is for measuring seconds, while the inner track is for minutes. The ’60’ at 12 o’clock also hearkens back to the old days, drawing inspiration from stopwatches dated to the ‘60s and ‘70s. 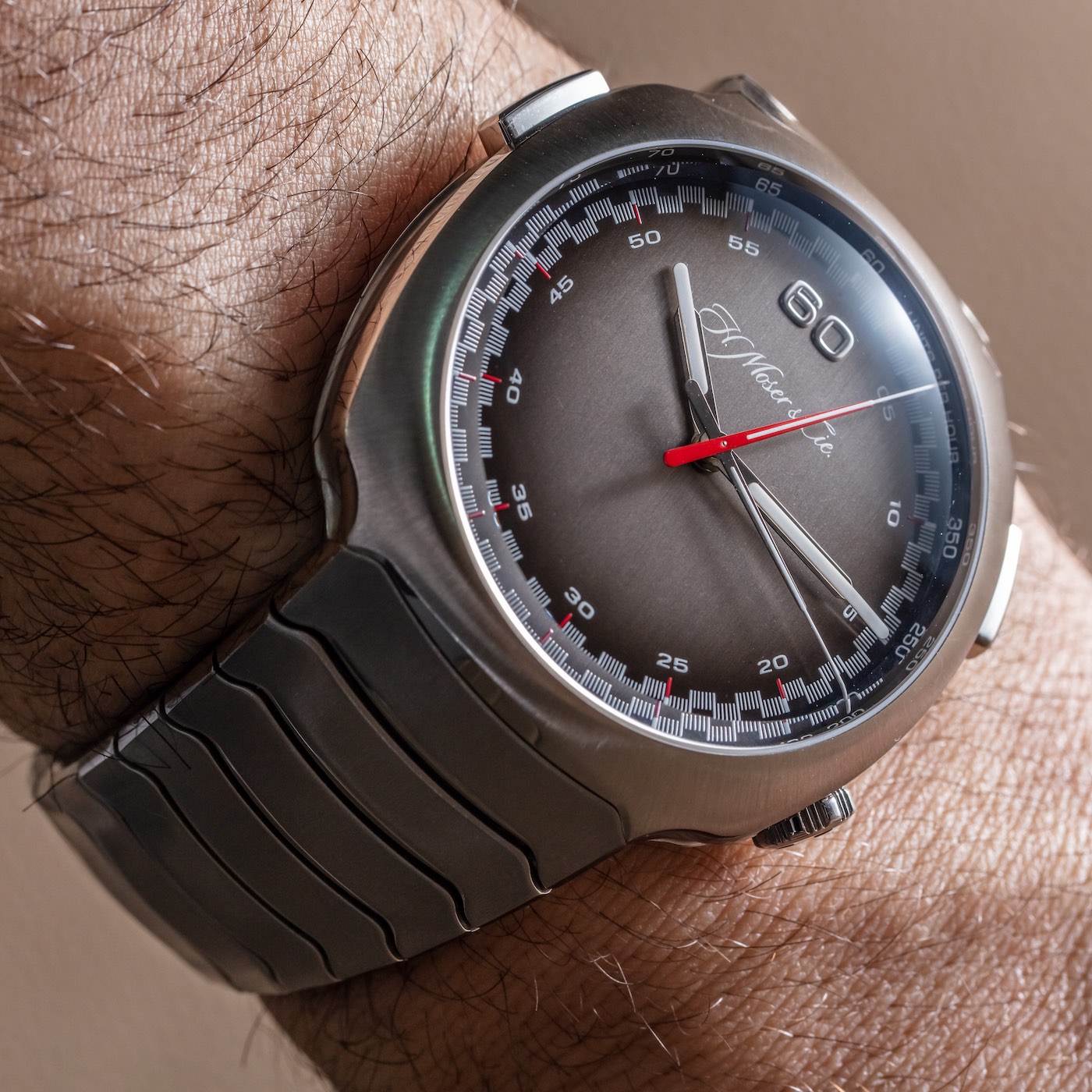 The hour and minute hands on the Streamliner Flyback are done in a way that I’ve never seen before by using two sections, with a curved outer section done in Globolight, a ceramic-based material that contains Super-LumiNova. This is is the first time Globolight has been used on watch hands, which is a fun fact, but more important is that they are highly legible and easy to read. The two central chronograph hands are done simply and elegantly so as to be legible and distinguishable from one another. The minute hand is rhodium-plated, while the seconds hand is done in a stark red that can’t be missed for anything else on that dial. 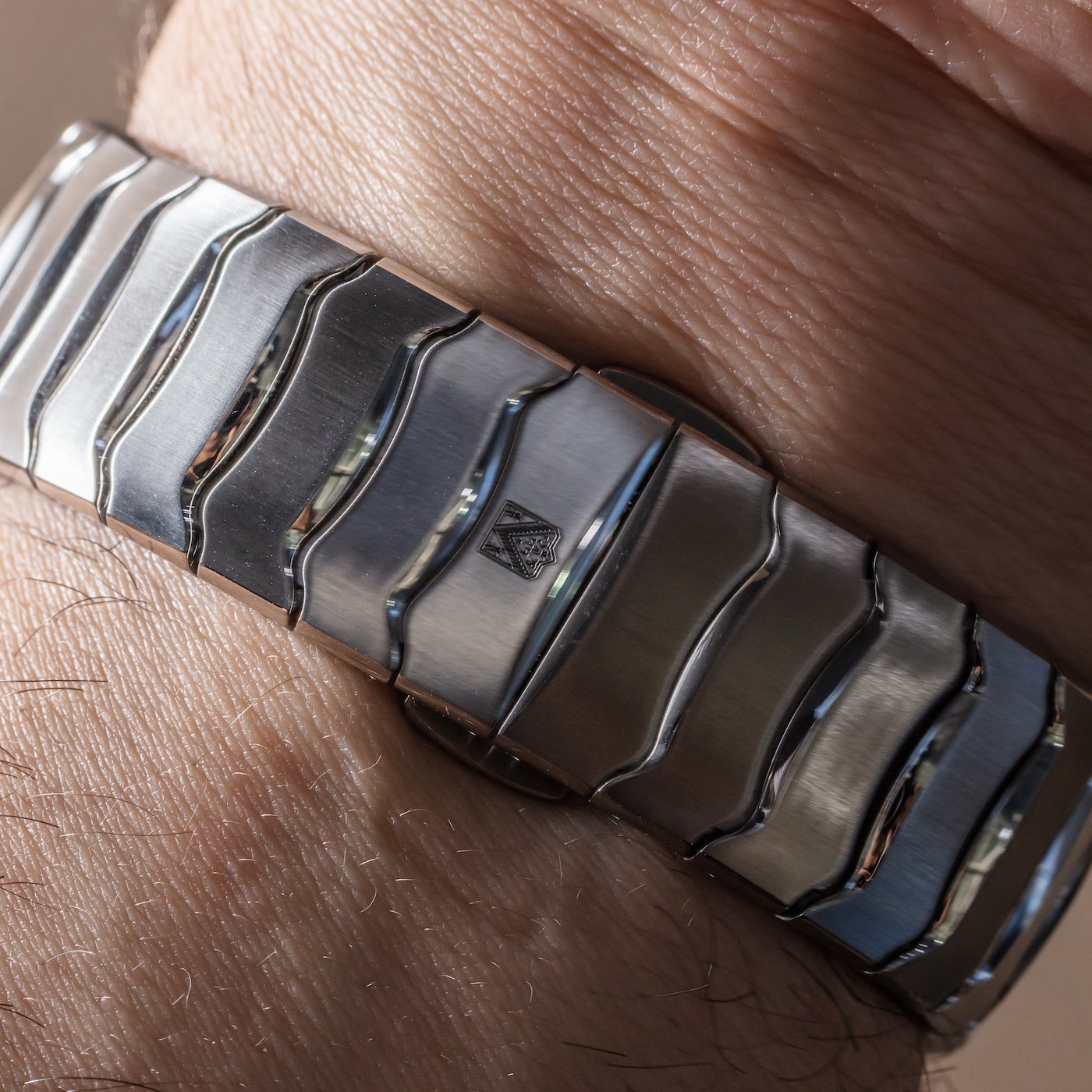 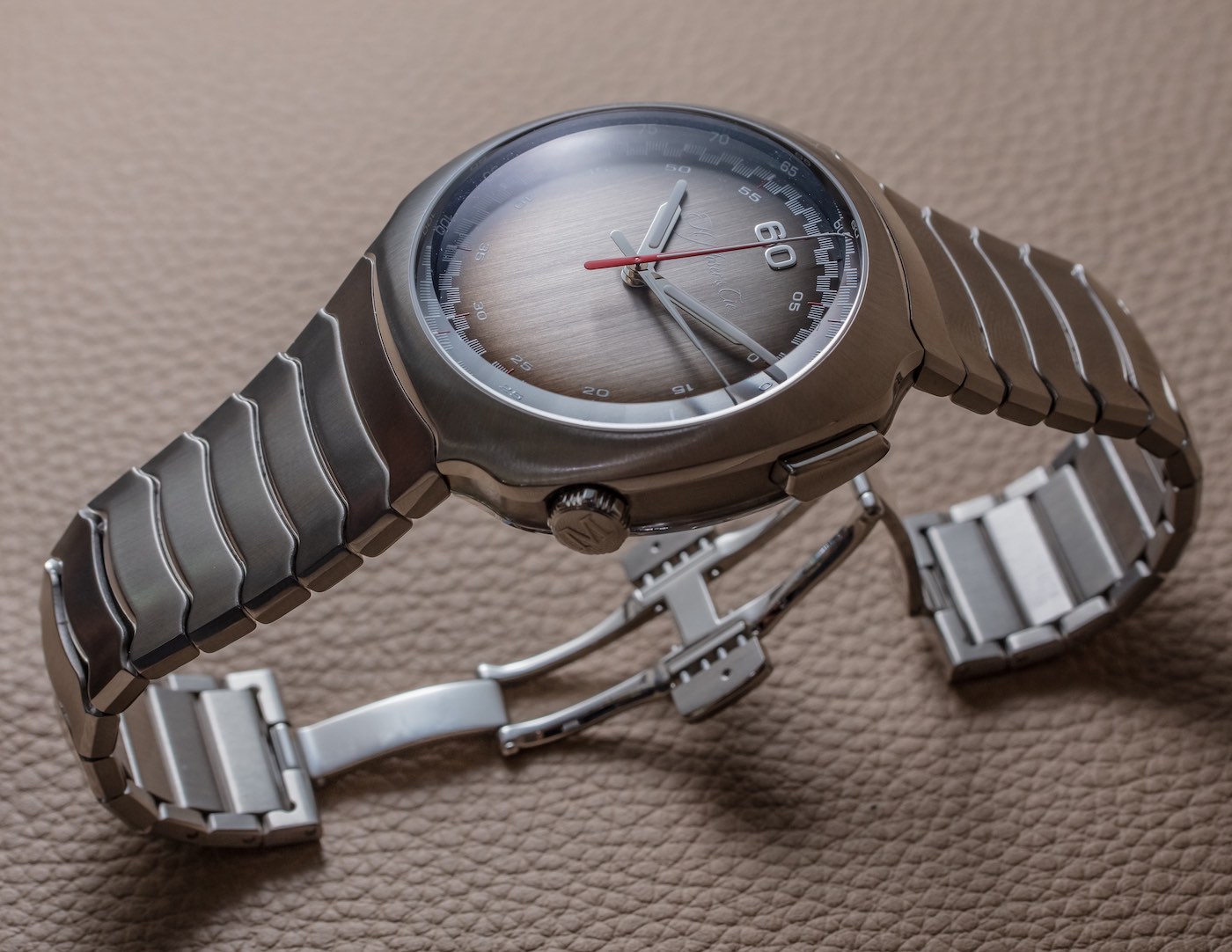 The H. Moser & Cie Streamliner Flyback Chronograph automatic watch plays with expectations in several ways and results in a watch that delivers such a joyful wearing experience. The watch industry is going through a moment of integrated bracelets, but I really don’t see this watch being another addition to that category. It’s really not providing an alternative to some of the impossible-to-get steel sport watches because it’s just so quirky and true to itself. Between the bracelet, movement, and finishing quality, Moser goes above and beyond with the Streamliner. What they don’t assume is that their customers are seeking watches designed to appeal to a wide audience looking for another Genta-lite. The first of this new collection, the H. Moser & Cie Streamliner Flyback Chronograph, is limited to 100 pieces and priced at $39,900. You. can learn. more at h-moser.com. 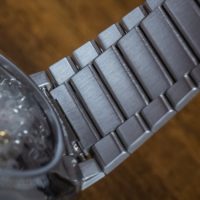 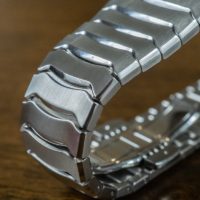 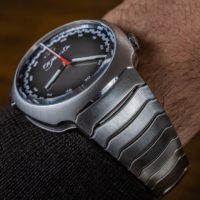 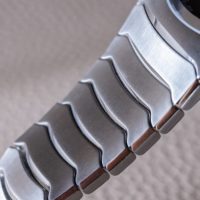 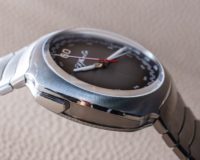 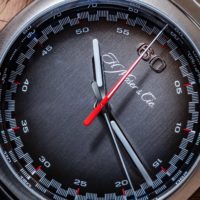 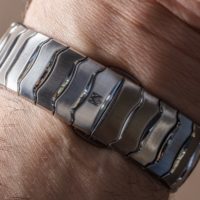 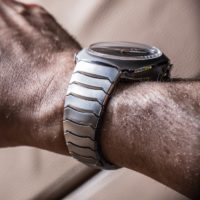 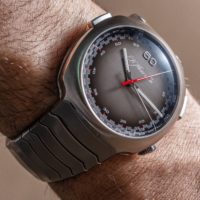 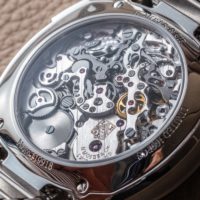 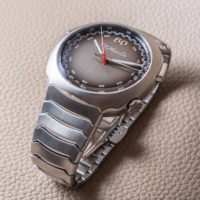 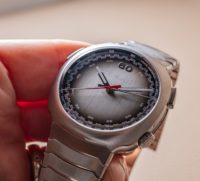 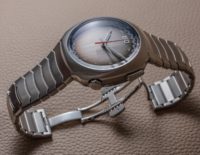 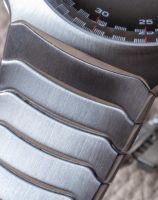