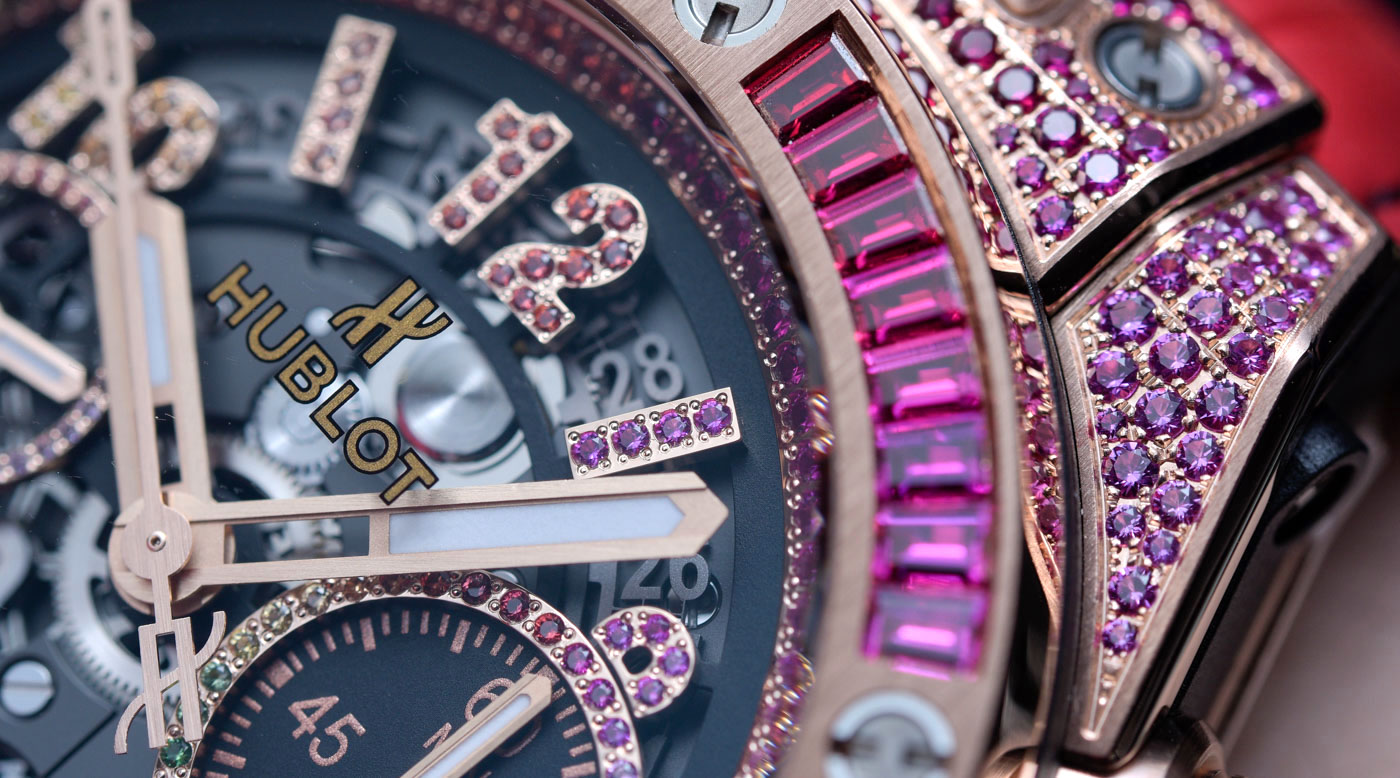 One of our shared goals here is to help bring watch enthusiasts closer to a diverse range of watches. Why? Simply because I am yet to meet a fellow watch-lover who’d be lessened by a broader, more vibrant appreciation of timepieces. Forming that bond through a detailed and honest analysis is sometimes an easy thing to do; and other times, it’s nigh-on impossible. From a quick glance at the Hublot Big Bang Unico Rainbow King Gold, I trust you can tell which end of the spectrum we are experiencing today. 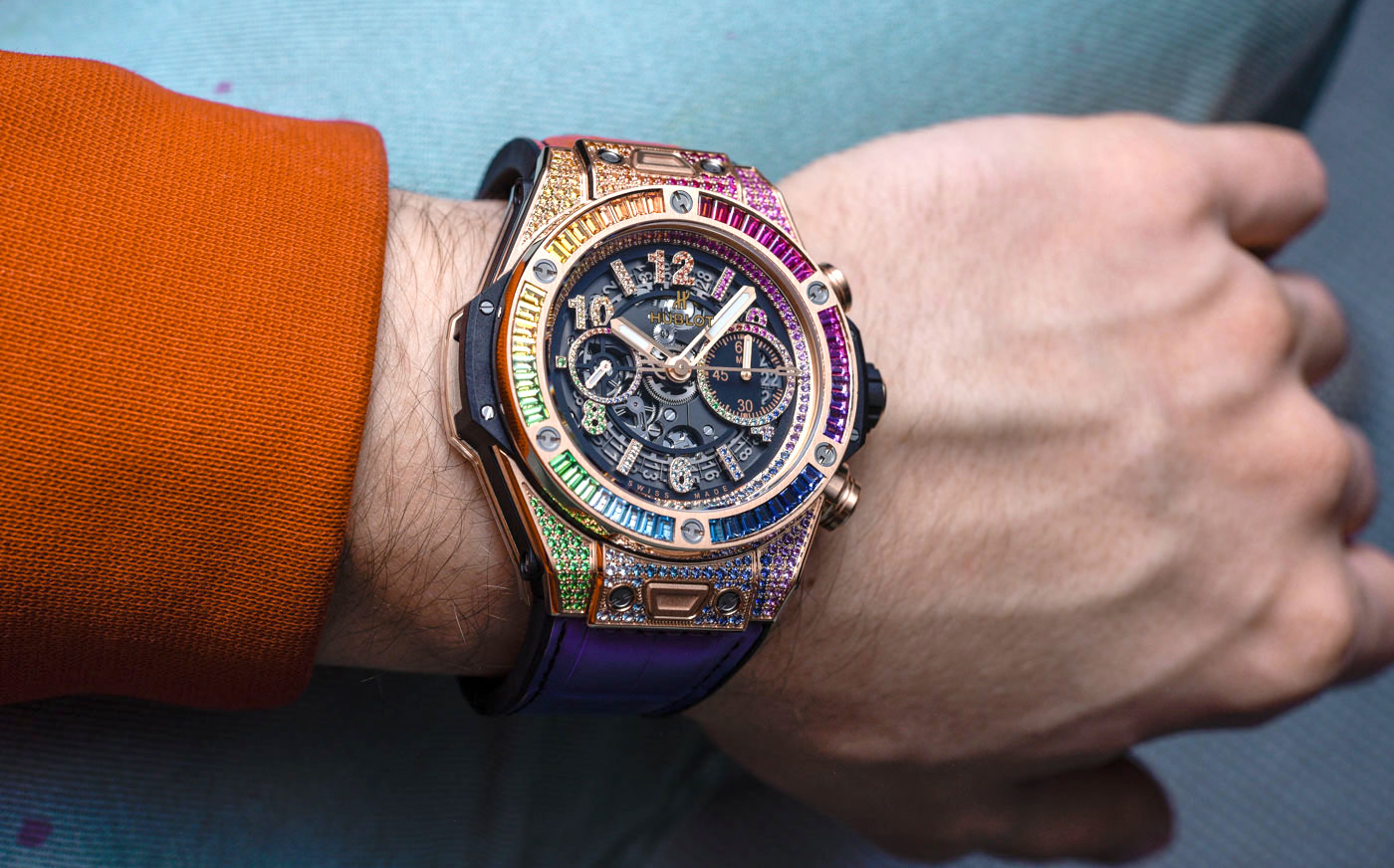 First things first. If you dislike or deeply disapprove of bejeweled watches, the Hublot Big Bang Unico Rainbow King Gold will not change your mind — in truth, chances are that it will just fuel your displeasure in them. Strangely, both Ariel and I have a very open-minded approach when it comes to bedazzled watches, so when discussing such a timepiece, we need not convince ourselves about its raison d’être. The Unico Rainbow King Gold is a tough one to crack even for us, and I’ll share why in a moment. 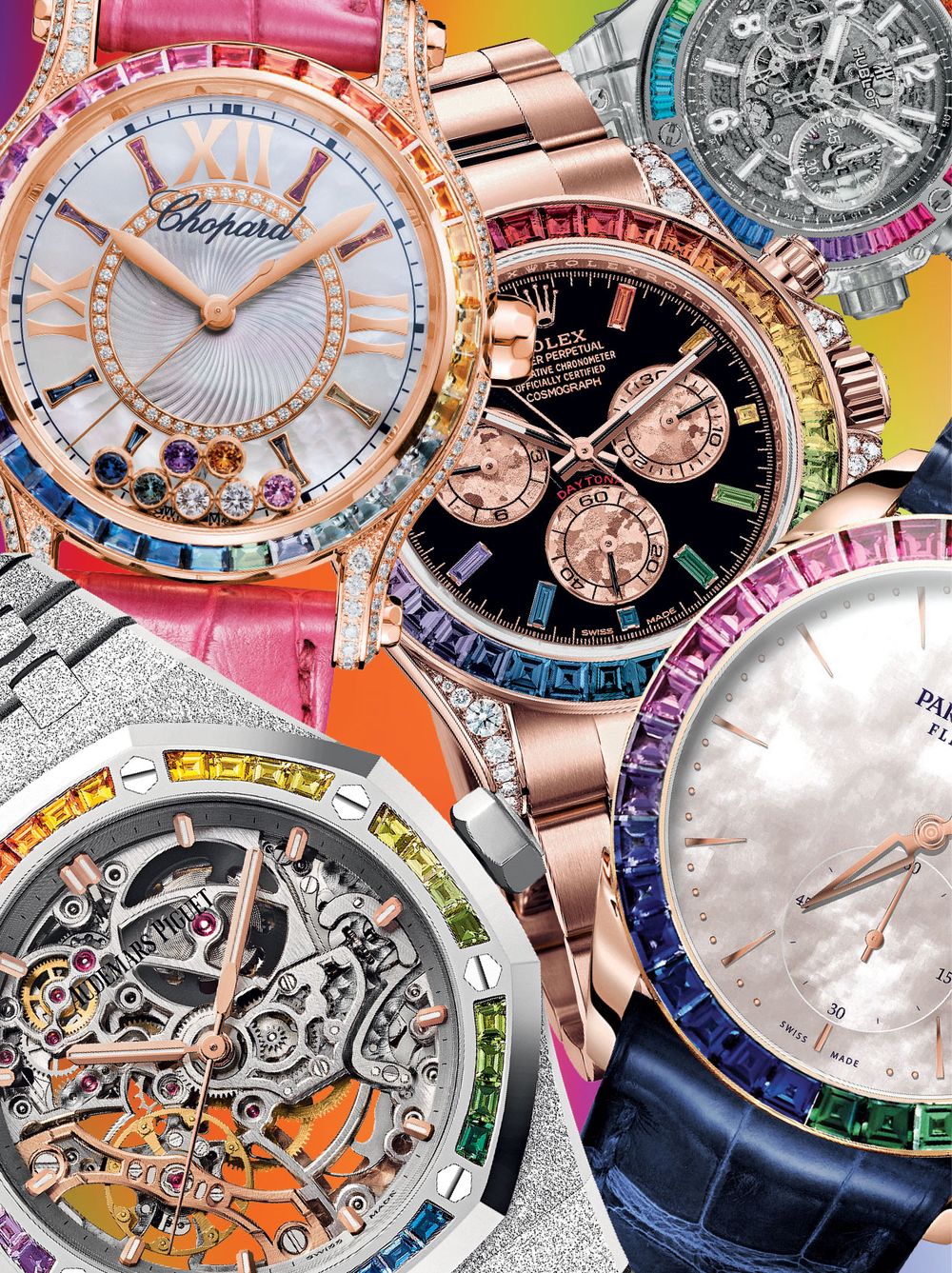 Rainbow-themed ultra-high-end watches are all the rage these days. Just look at that neat image assembled by Bloomberg to get a vague idea of where things stand these days. Rolex has been making the Rolex Daytona Rainbow for ages, but it was not until 2018’s Rainbow Daytona, and its immediately tripled resale value, that really urged brands to take note — and develop an appetite for this long-ignored market segment. Notably, rainbows also make for one of the safest ways of making an eye-catching and ultra-luxurious watch — as was discovered by Rolex back then and is being rediscovered by others, today. 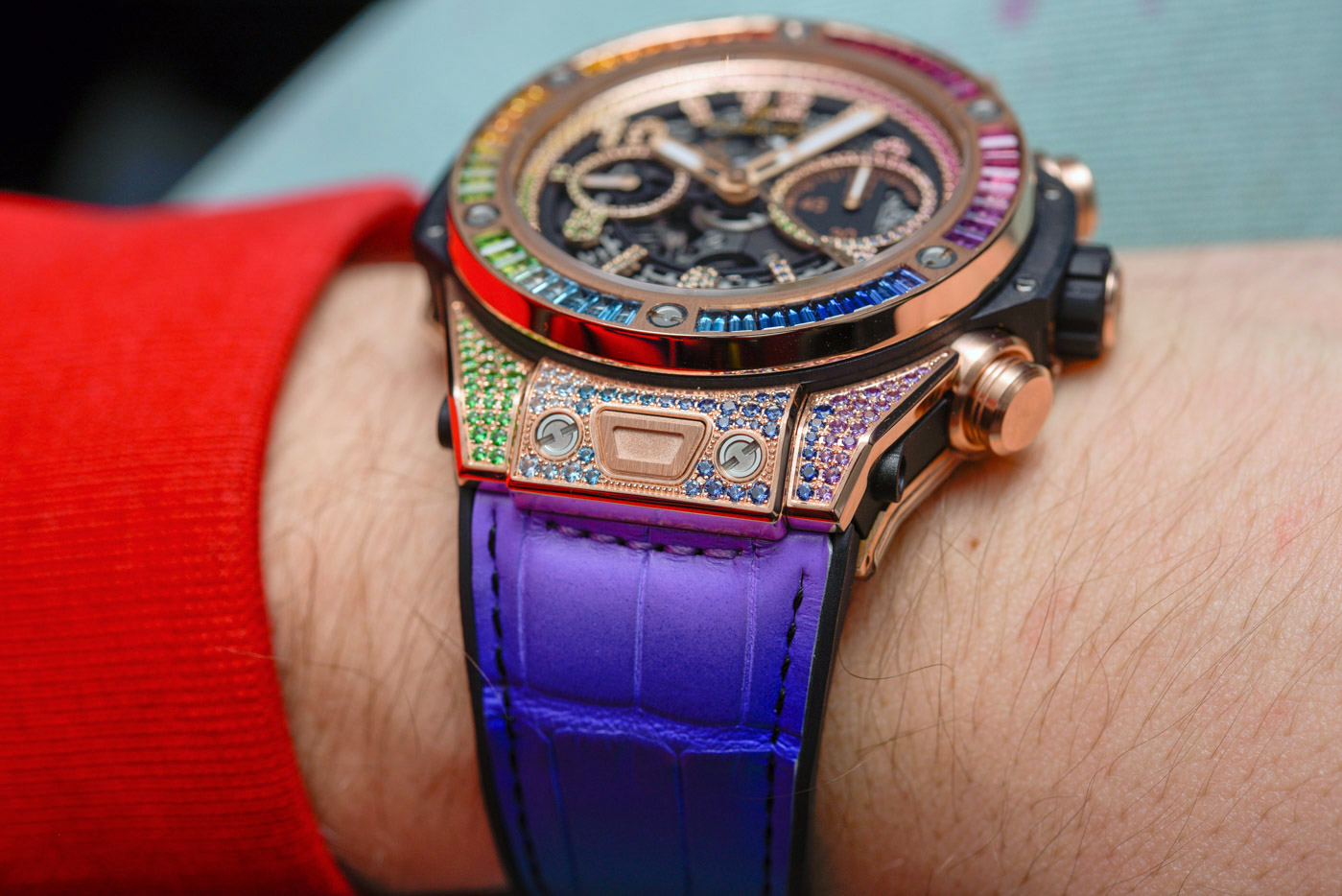 In typical Hublot fashion, though, the Nyon-based manufacture went all out on the rainbow theme and applied it to the bezel, the flange ring (!), and the indices, as well as the entire top section of the lug structure. What I think about truly outlandish, jewelry-style luxury watches I have shared in this hands-on with the infamous Richard Mille Bonbon collection — if you are here, reading this for whatever reason, I suggest you take a look at that train of thought, as well. 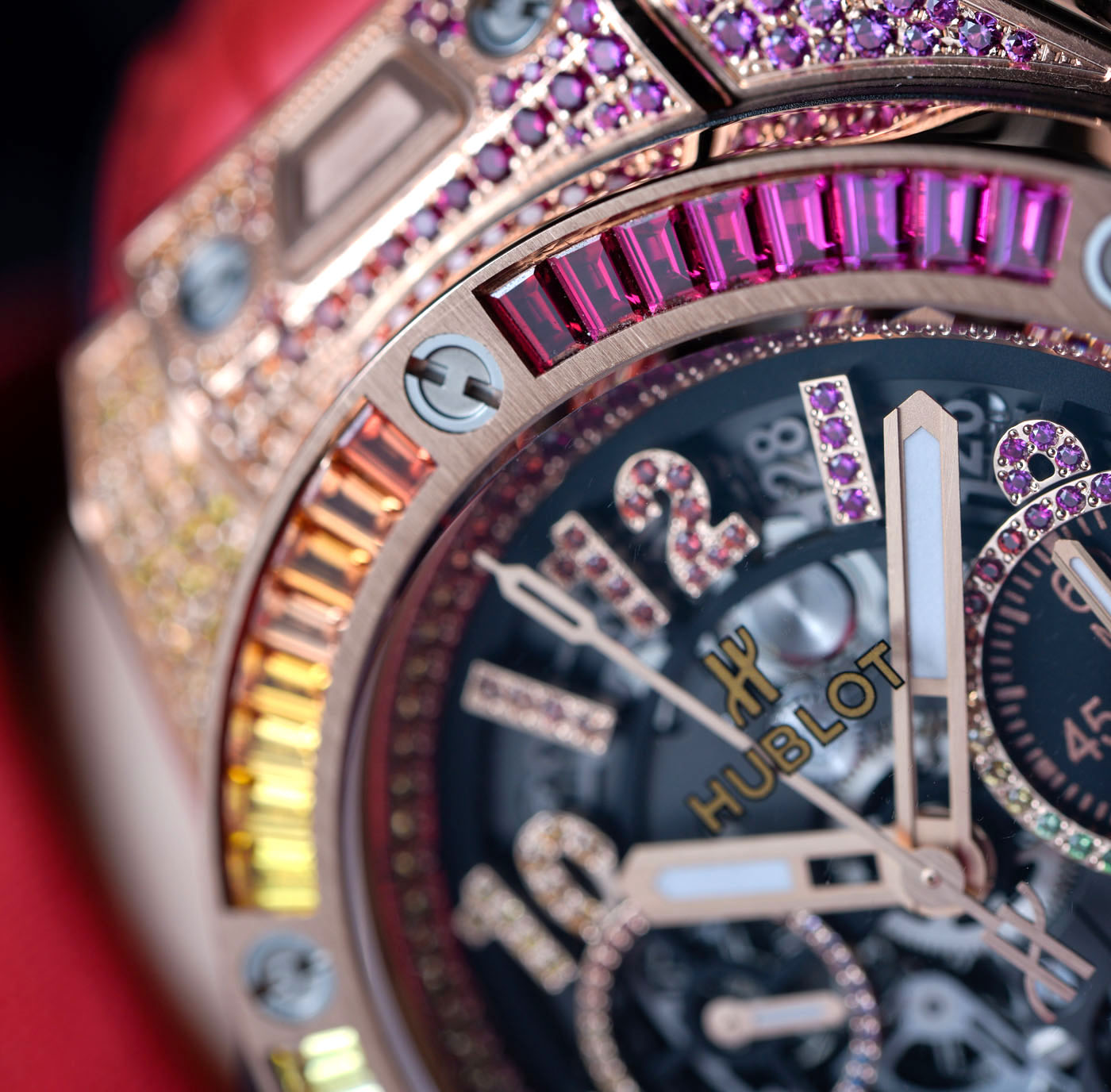 A core component of Hublot is the fusion of materials. As recently as just a few months ago, I was checking the specs of an Hublot model (don’t recall which one) and I was still surprised by the inclusion of a random modern material in some obscure spot on the exterior. They have made 18k-gold scratch resistant (I tested it here), made all kinds of crazy translucent cases, paired rubber straps with luxurious 18k gold cases (the norm today, definitely not the norm when they begun), and the list of Hublot’s more or less logical combinations of materials just goes on and on. This one though? It’s a gold watch with some colorful stones in it. This definitely counts as a “fusion of materials” for conservative brands like Rolex, surely, but a walk in the park by Hublot standards. 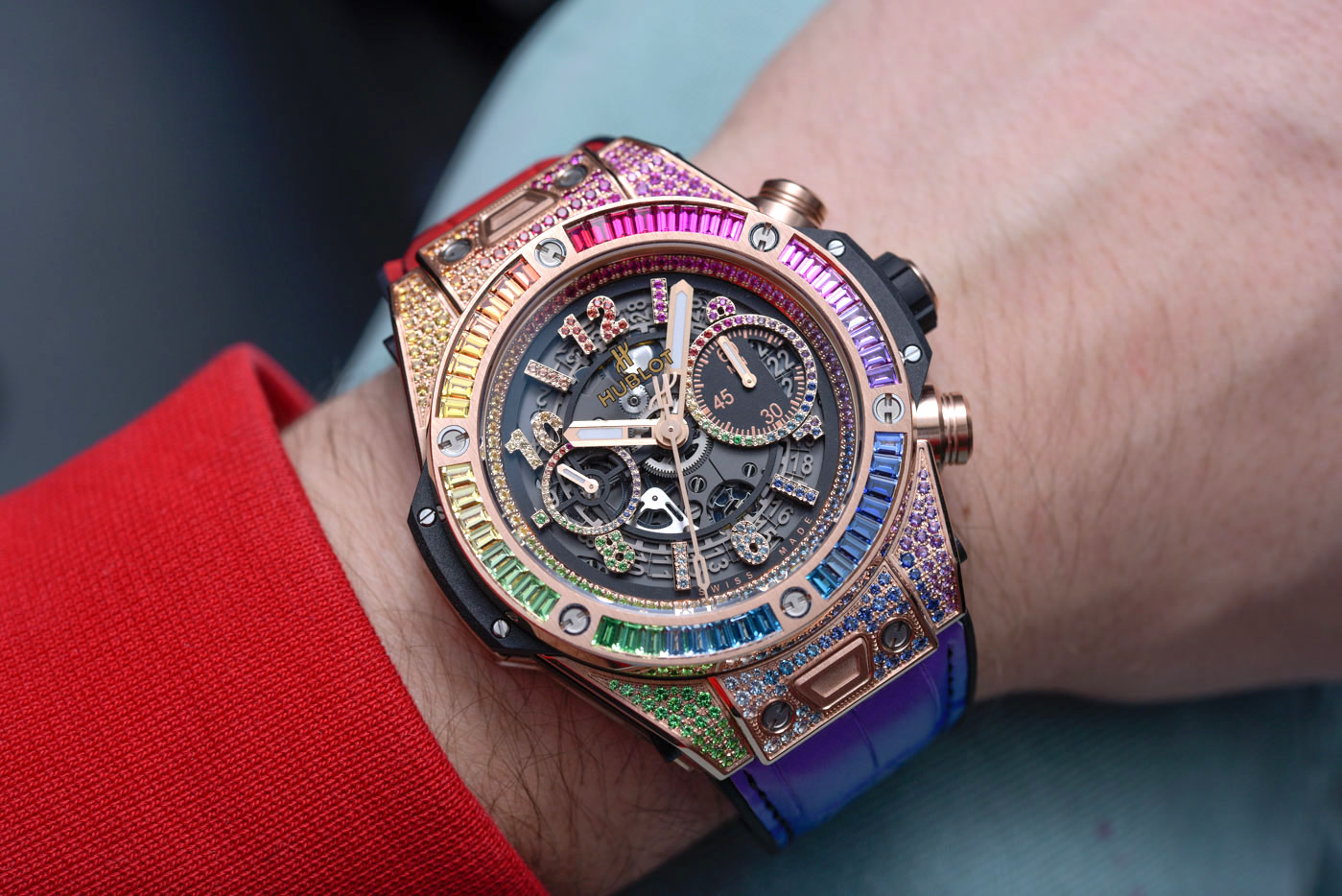 I am a fan of a lot that Hublot has done under the leadership of Jean-Claude Biver — with their marketing and ultra-high-end exercises, as well as some of the relatively more attainable models. The Hublot that I like, however, wants to be, looks to be, and is made to be a Hublot, not something else. For this reason, I don’t quite like the whiff of “me-too” that lingers around this baguette-rainbow madness or the Spirit of Big Bang, for that matter.

That’s my only gripe with this new piece; but that does not answer what we should make of the Hublot Big Bang Unico Rainbow King Gold Watch, so here’s why I like it — and why I propose this watch as something that should be celebrated. 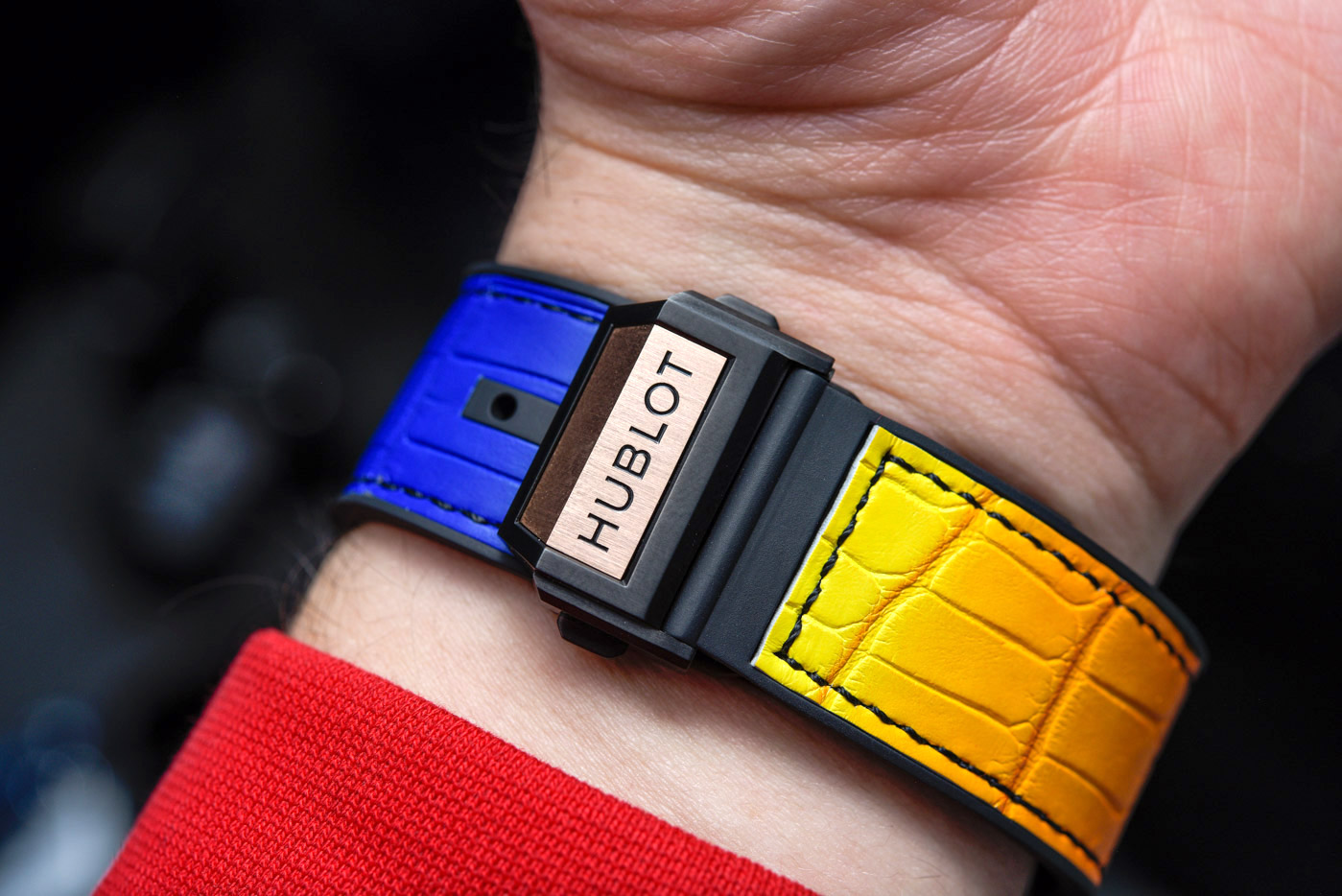 As I slide this weird Big Bang around my wrist with its color-transitioned, purple-green-blue-red strap, the gazillions of facets on the gazillions of colorful stones create a laughable lightshow even under the dullest, normally terribly unflattering spotlights in the ceiling. It is so ridiculously over-the-top that there is no way anyone in their right mind would ever want to make a case for this as a serious piece of watchmaking. 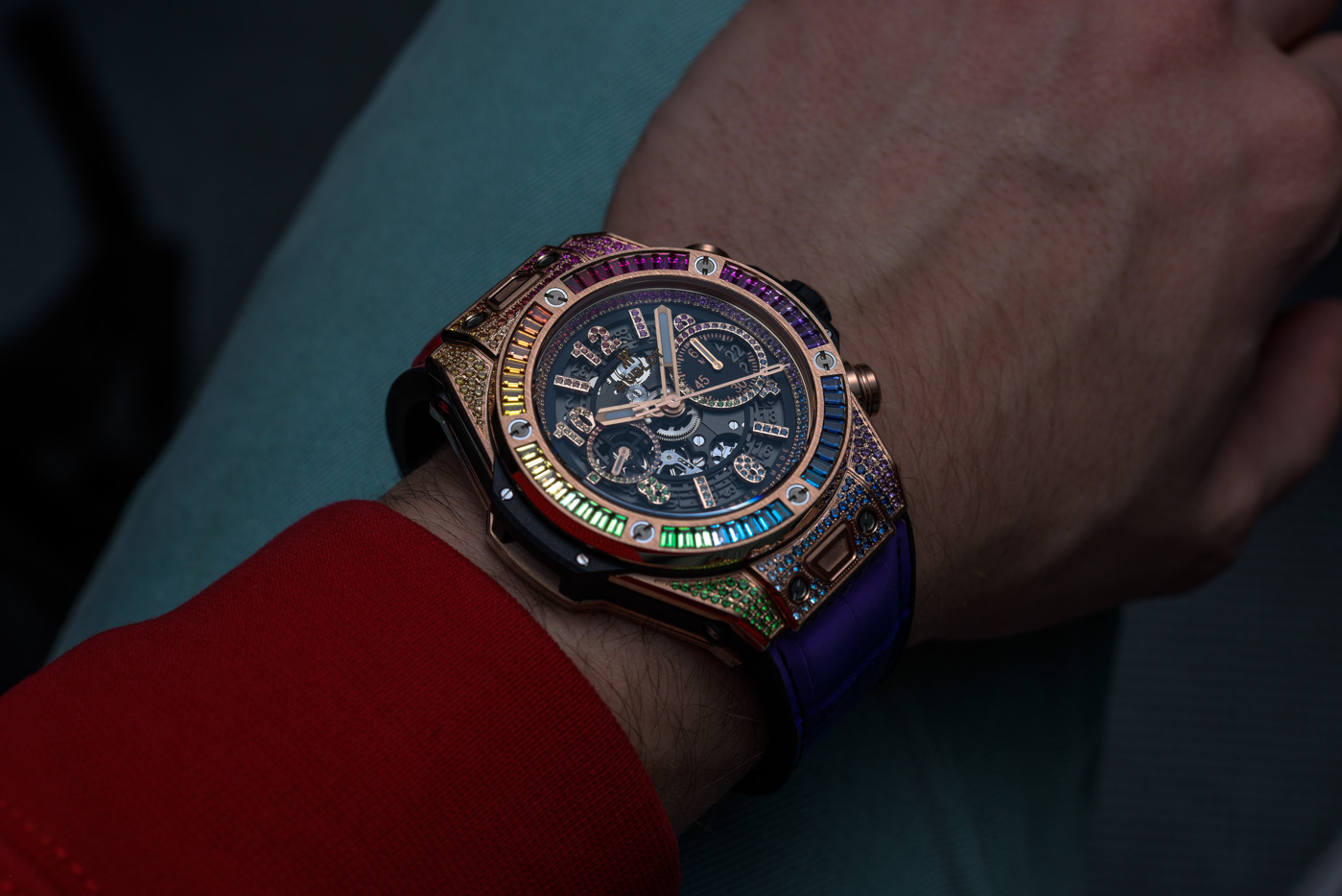 It’s a serious watch that put on a masquerade — like a serious actor that puts on a clown’s make-up and clothes to cheer people up. The Hublot Big Bang Unico Rainbow King Gold Watch is a joke, it’s a laugh. It’s as though the watch (and with it, all of Hublot) were looking at you with its curious Swiss face, asking, “Do you want colors? How about lots of colors?” BANG! “We hope you’re happy now!” I look at this watch and this is what I can hear in my head — I’ll seek assistance, don’t worry — but not with a negative or aggressive tone, but rather an over-the-top-playful tone. 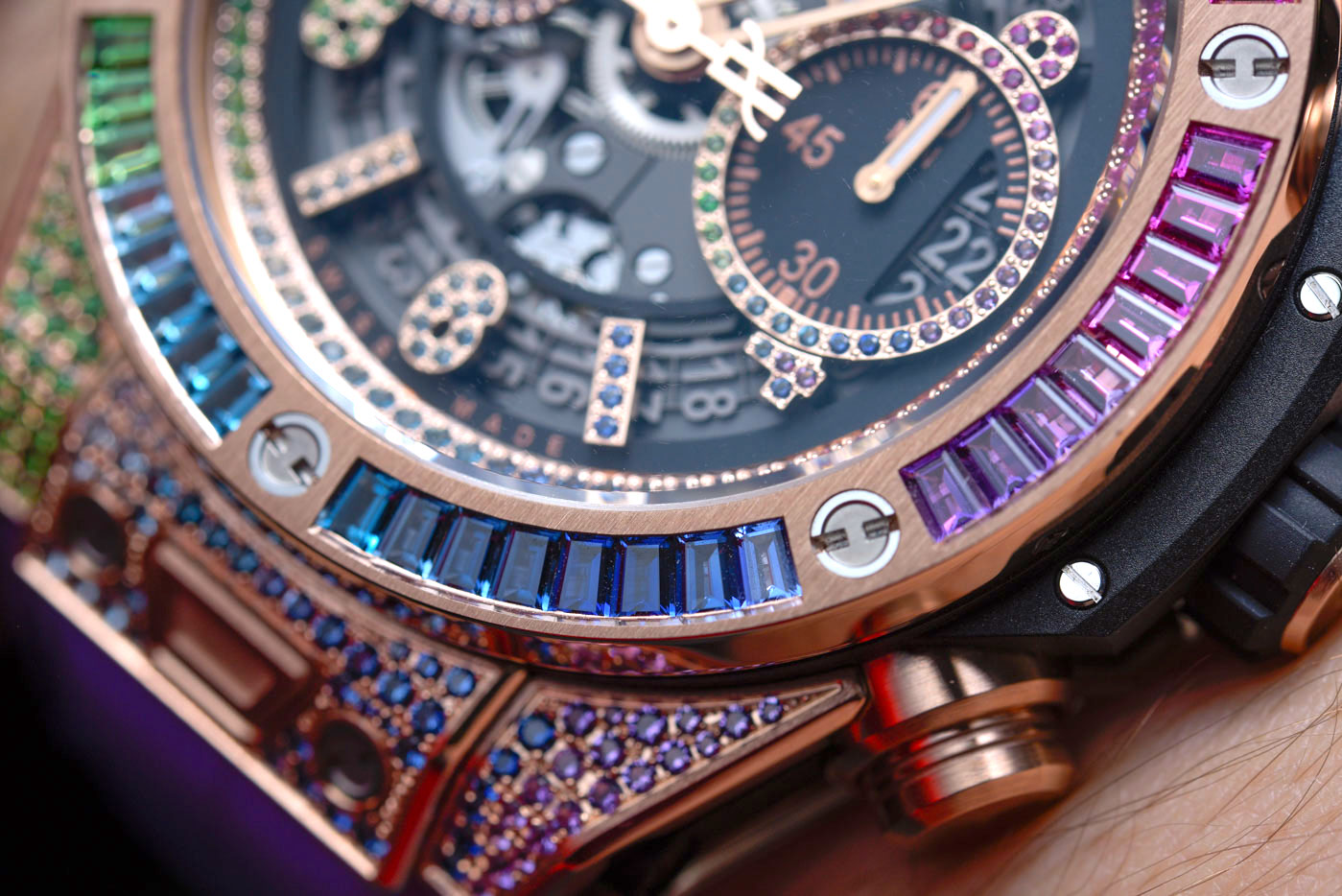 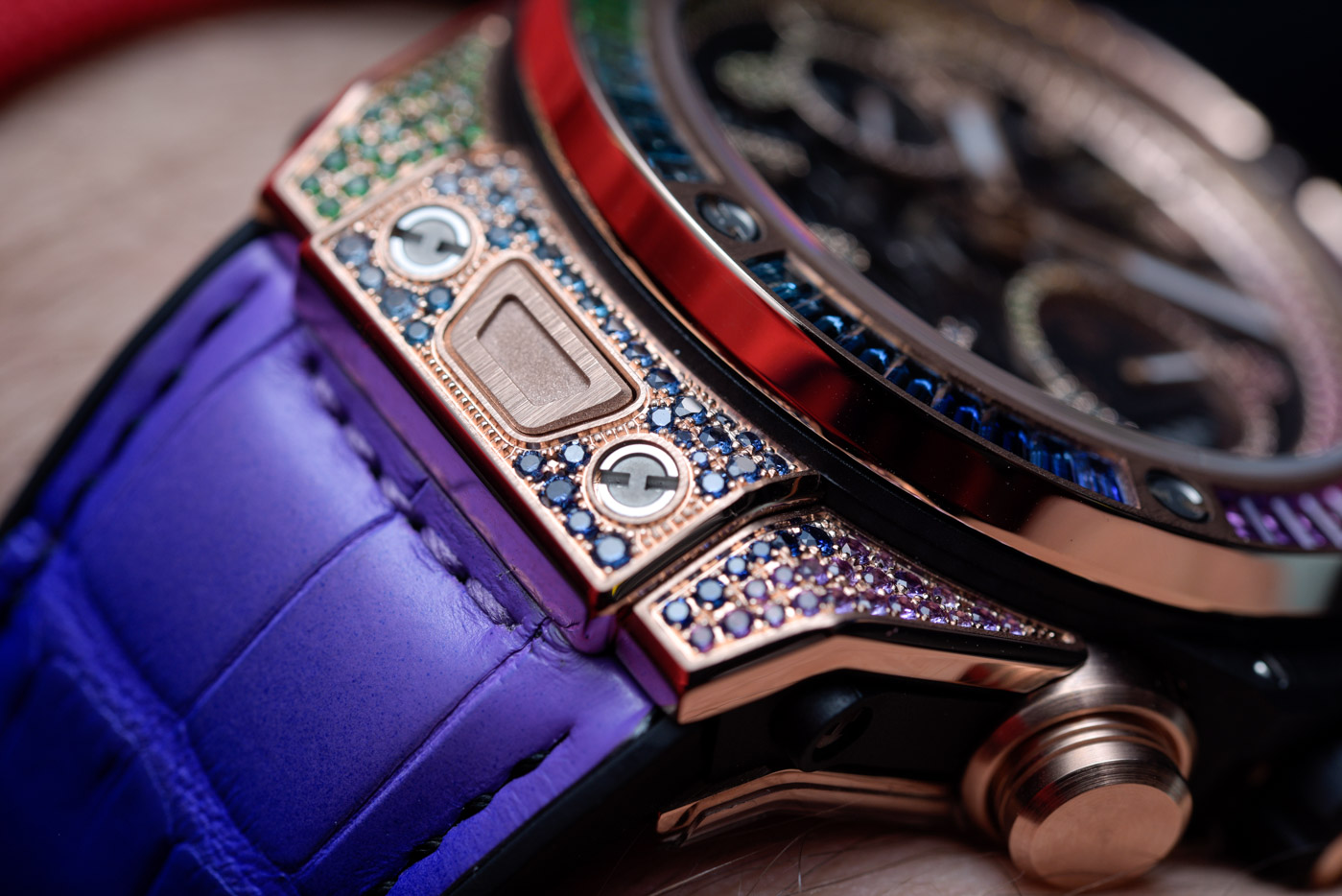 I mean, placing brilliant-cut stones next to baguette-cut stones is a real challenge to pull off right. It’s like wearing polka dots with stripes. It can be done, but it’s very, very hard, and there’s a very, very high chance that you’ll look ridiculous when you try to mimic those who can do it. Although the photos exaggerate the effect when compared to how this watch appeared to my eyes in reality, even when holding it in one’s hand, there is a strong and immediately apparent dissonance between the sizing and overall effect of these two stones. 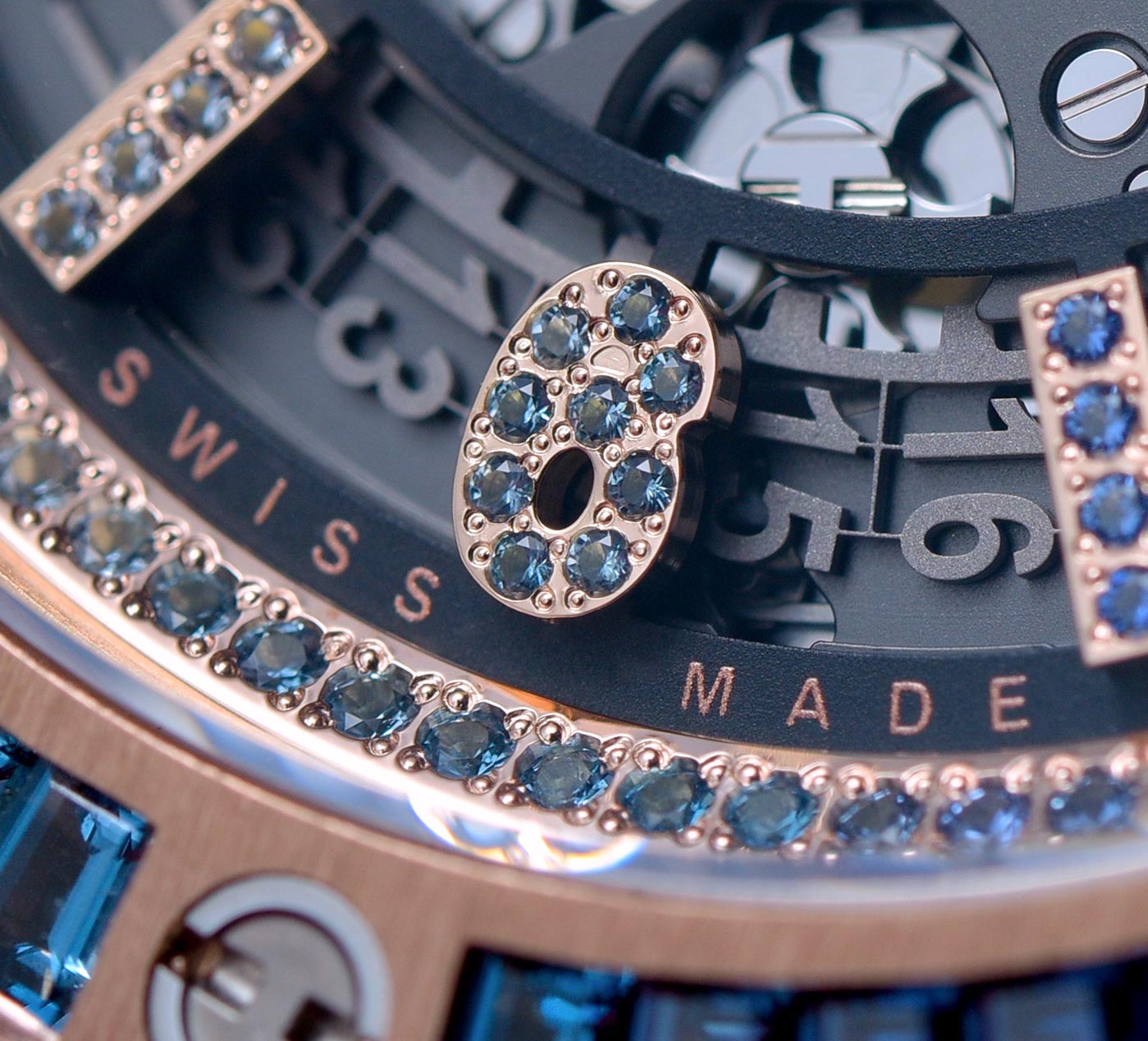 Hublot has a small, but capable gem-setting department in its manufacture near Geneva, and they have done some truly impressive things before. On this occasion, I have some issues with their work, but said reservations are just of a stylistic kind, not qualitative. Just so you know the level of complexity they can handle, the Hublot Big Bang Unico Rainbow King Gold features 176 colored stones on its case, 48 on its bezel, and 212 on its dial. Altogether, there are 436 stones, rubies, pink sapphires, amethysts, blue sapphires, blue topazes, tsavorites, yellow sapphires and orange sapphires, and that’s Jacob & Co. territory. 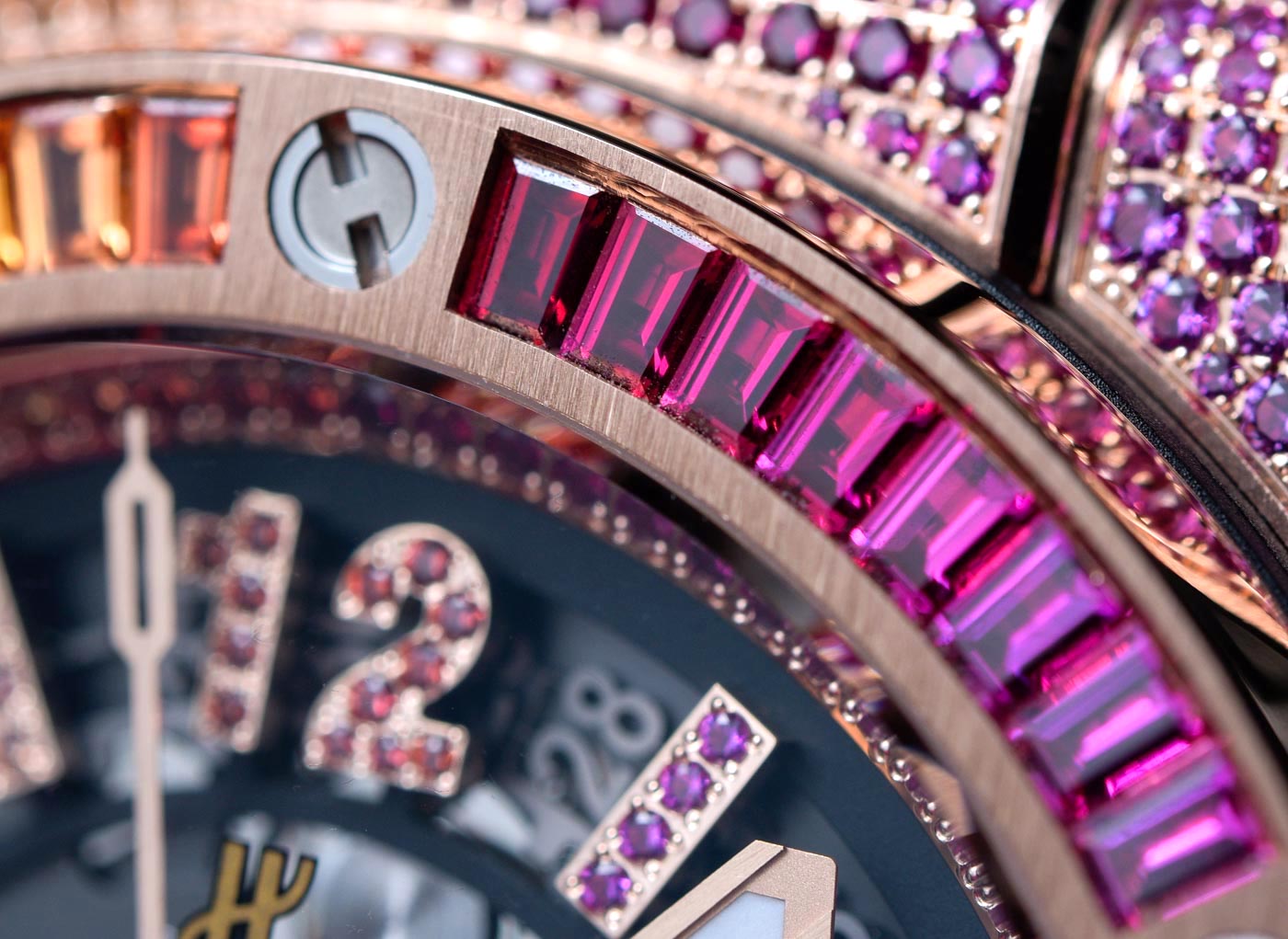 All those stones make for a lot of eye candy also — and also a lot of ways for things to go wrong. The bezel, with its baguette-cut sapphires, looks proportionate to the case and the watch as a whole, and that’s great. The lugs and the dial components, however, look exceedingly weird, as though these small stones originally belonged to a Michael Kors fashion watch, not a six-figure-priced piece — even though the quality of the settings and the cuts do, of course, belong to the luxury segment. 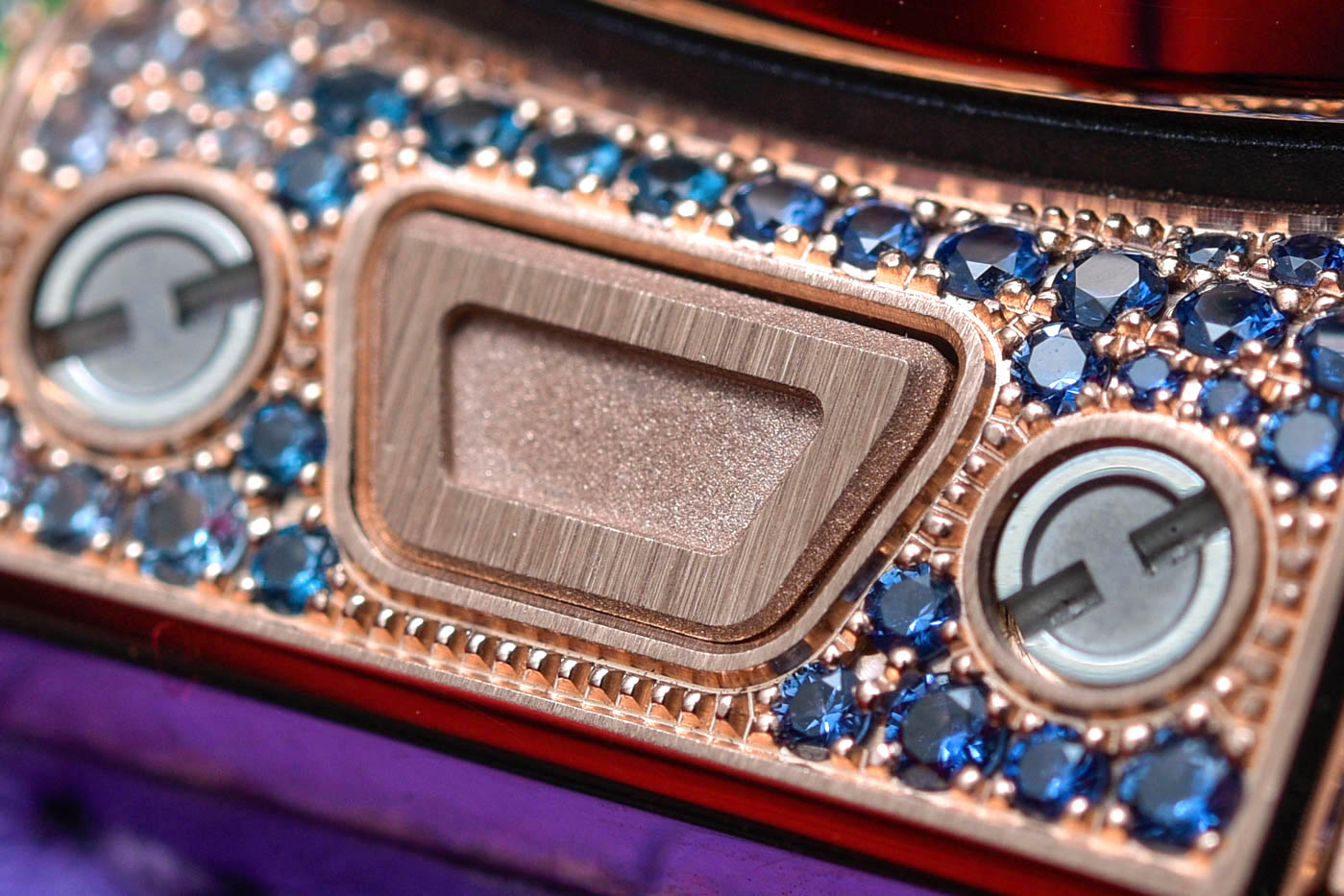 All that noted, criticizing this watch for the disproportionate stones and resulting overall look is like a makeup artist walking up to a clown and criticizing the nuances of his makeup. It’s clearly missing the point, and that’s something I don’t want to do. So, here’s what I will say in closing, instead. 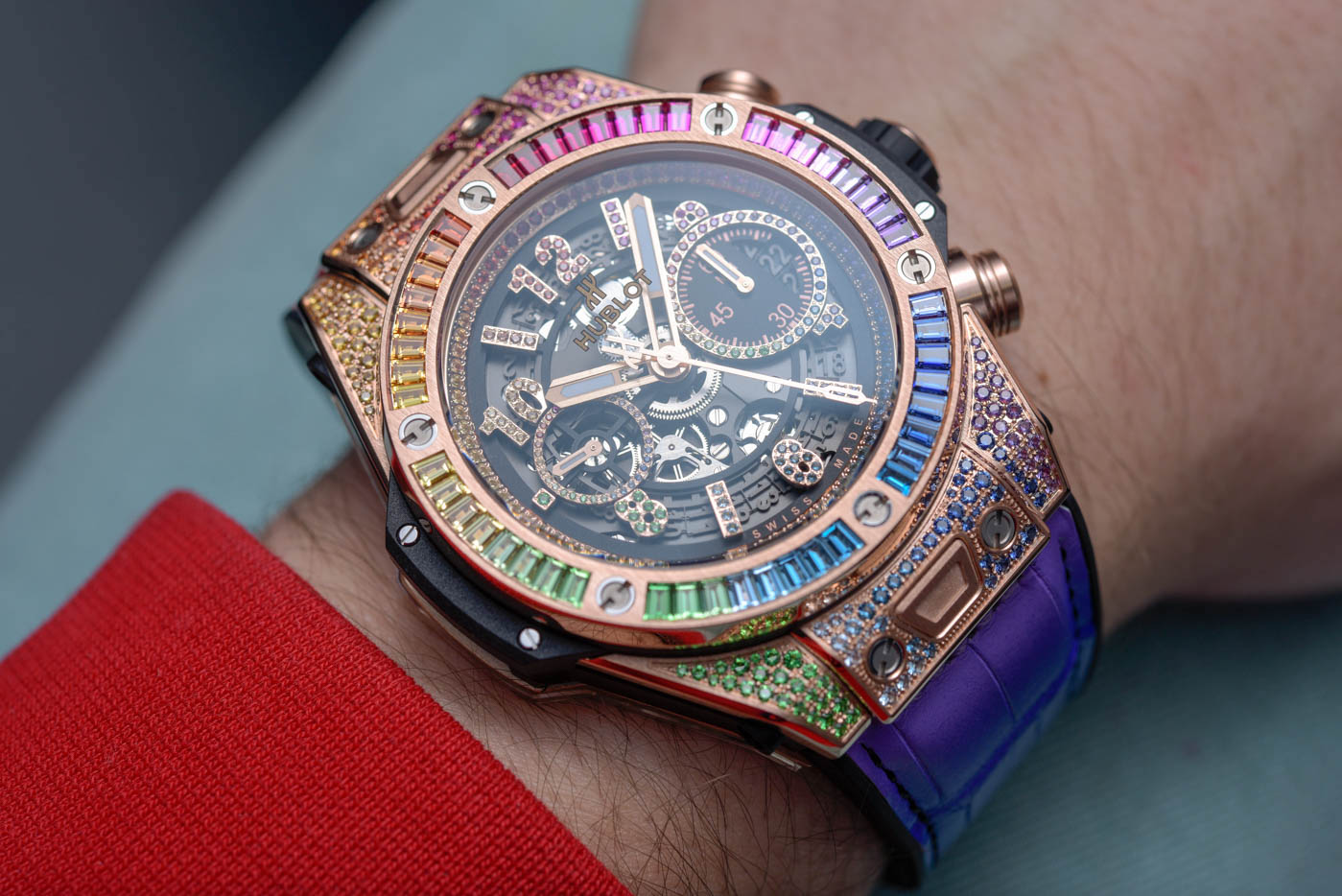 Would I wear the Hublot Big Bang Unico Rainbow King Gold Watch? Hell yeah, I would. It’s a gold watch with tons of baguette-cut sapphires (they are my weakness, my kryptonite) and brilliant-cut colorful stones on them. I’d be lying if I told you I wasn’t a sucker for these things. If given the choice, would I take this over a base Lange 1? No. Have I lost my mind? Therefore, I think no, I haven’t. But if I could wear this for weeks or months, I totally would, because I know this unafraid, likeable, laughable watch would cheer me up. And I think it would cheer most of my fellow watch-lovers up, too. Even though we will never have a chance to prove this, I very much believe that, if given the chance to wear this exact watch for a week or so, nine out of 10 watch enthusiasts would grow really rather fond of it. They, too, would still take the Lange 1 — but they wouldn’t be as repulsed by this rainbow-themed watch, as they may be now.

Price for the Hublot Big Bang Unico Rainbow King Gold is €90,300 which makes it an expensive piece of bedazzled horological fun. If you are so inclined, you can find yet more fun watches on hublot.com. 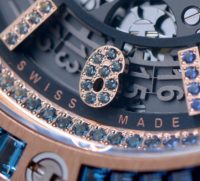 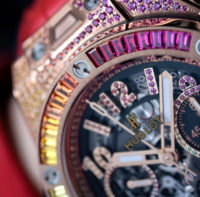