“Can I ask what watch you’re wearing?”

The amiable, scruffy guy in a Laker’s hat asks, sitting a few stools down at the local bar here in West Hollywood where we’re both regulars. That day he was wearing a Royal Oak “Jumbo” Extra-Thin, though I know he has a few Rolexes, as well. (You notice when another regular has a great watch collection.) I tell him it’s a Linde Werdelin, at which point he asks something along the lines of, “Say that again?”

We chatted over a drink (beer for him, Fernet Branca neat for me), and the conversation moved onto other topics, but I could tell he was ensorcelled by the LW. Before we parted ways, he took down the brand’s name on his phone, commenting on how he loved the case design, how lightweight it is, as well as how it’s something rare that his friends don’t know about. I think we sometimes take for granted how tough it is for non-enthusiast consumers to get exposed to the smaller independent brands, but it is a uniquely satisfying thing to watch when they do. 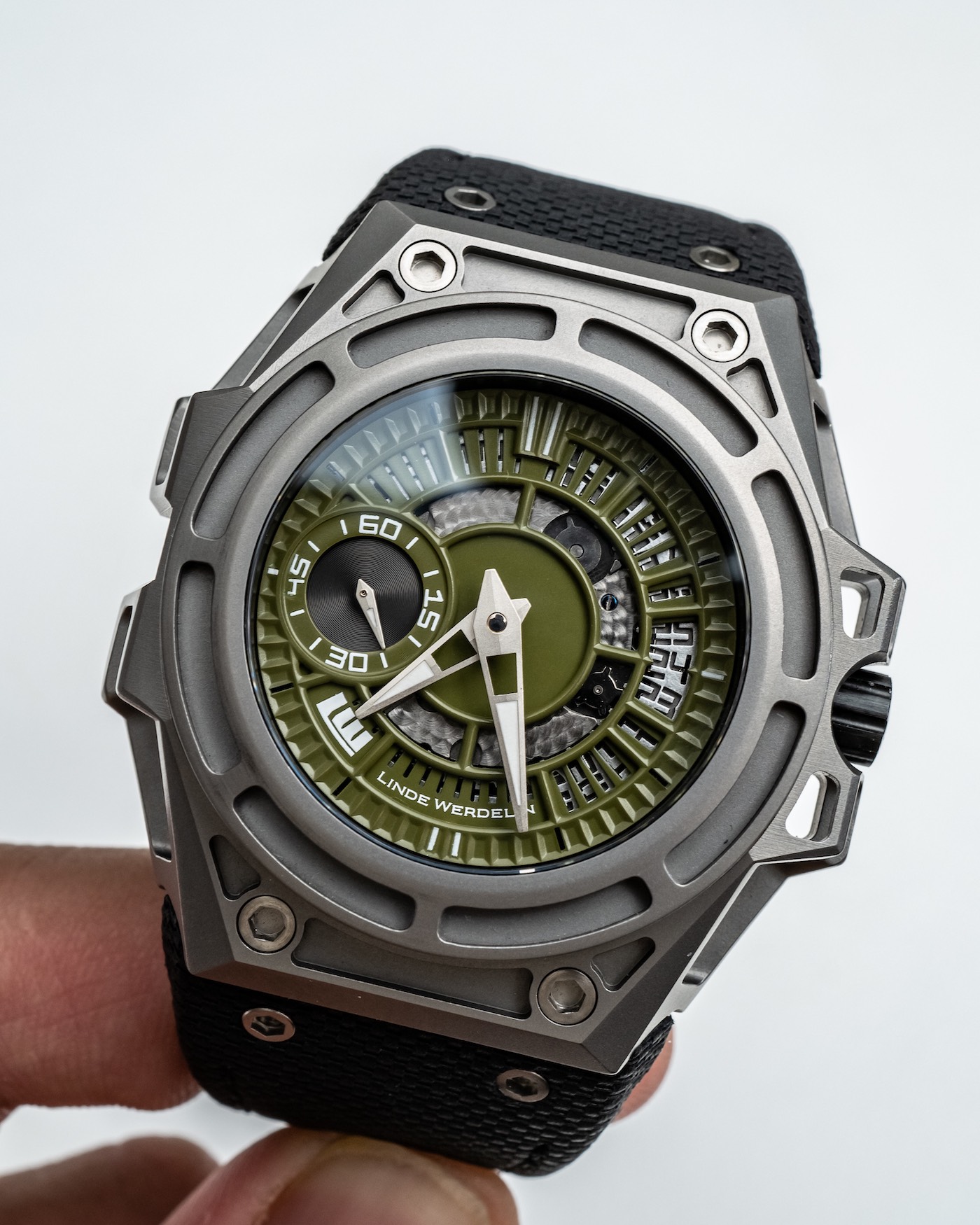 The Linde Werdelin I had on was the new Spidolite Titanium with the “Summit Green” dial. The Spidolite debuted back in 2009 after a team that was scaling Mount Everest asked the brand for something as lightweight as possible. The team cut down an existing watch case by 60% while ensuring the strength wasn’t compromised. 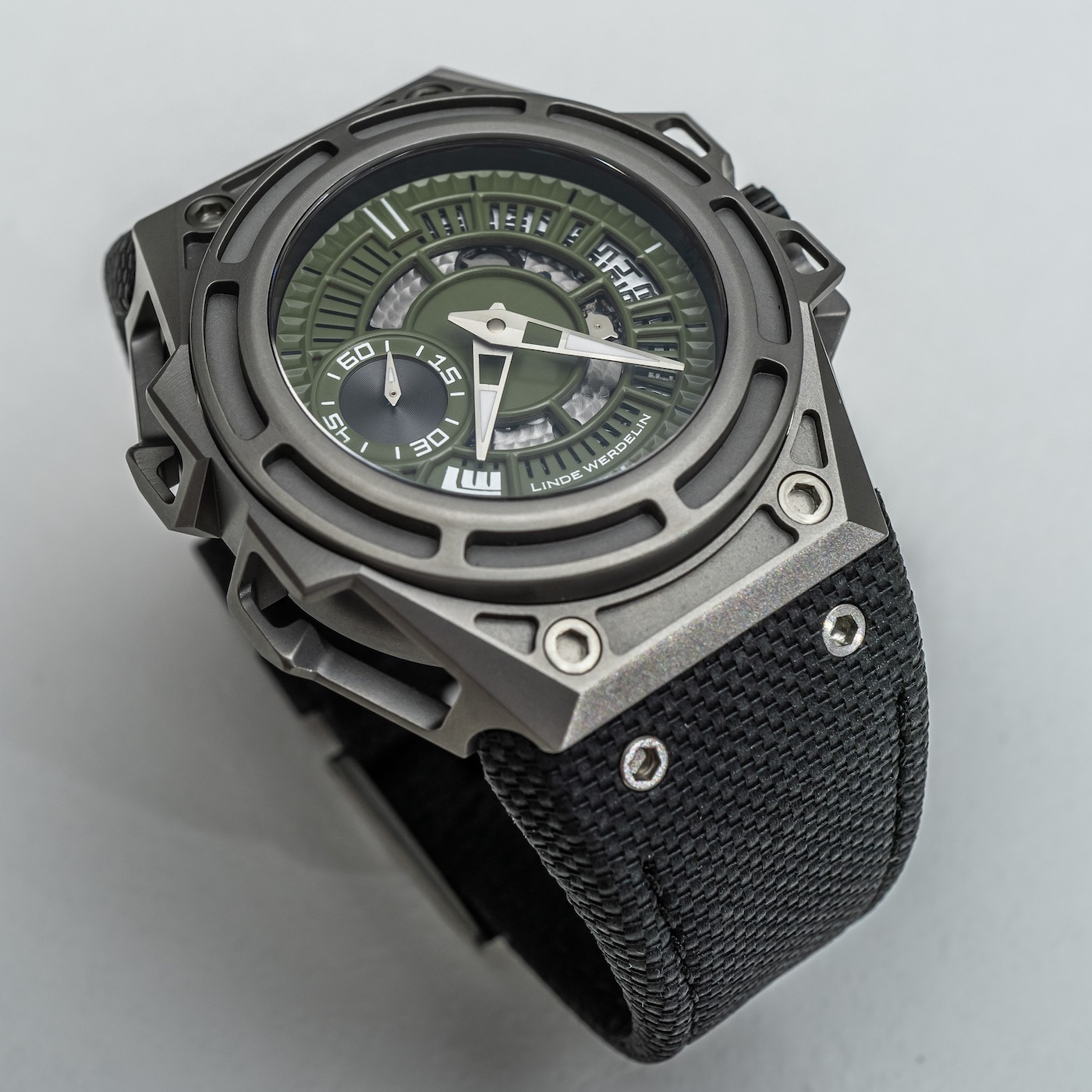 Linde Werdelin has gone through major changes since late 2016, scaling down operations and relying more on a smaller-batch, made to order model. As such, the two new colors of the Spidolite (Summit Green & Arktis Blue) are only being done in 75 pieces each. These are very similar to the old SpidoLite II watches from about eight or nine years ago, but the new matte finishes totally change the look and overall feeling of the watch. I recall the old “titanium blue” and “titanium red” were quite bright and loud, pushing wearability on an already bold case design. 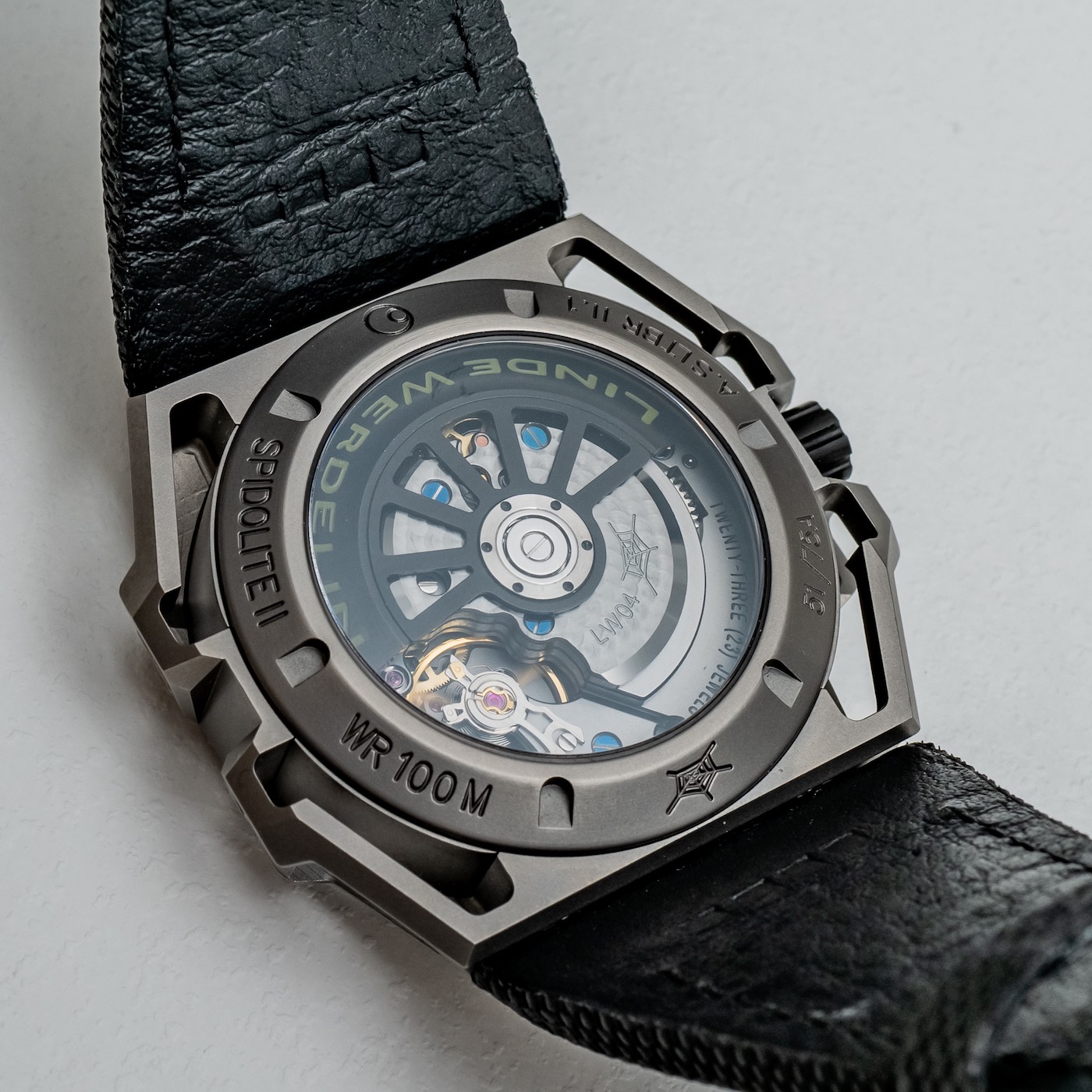 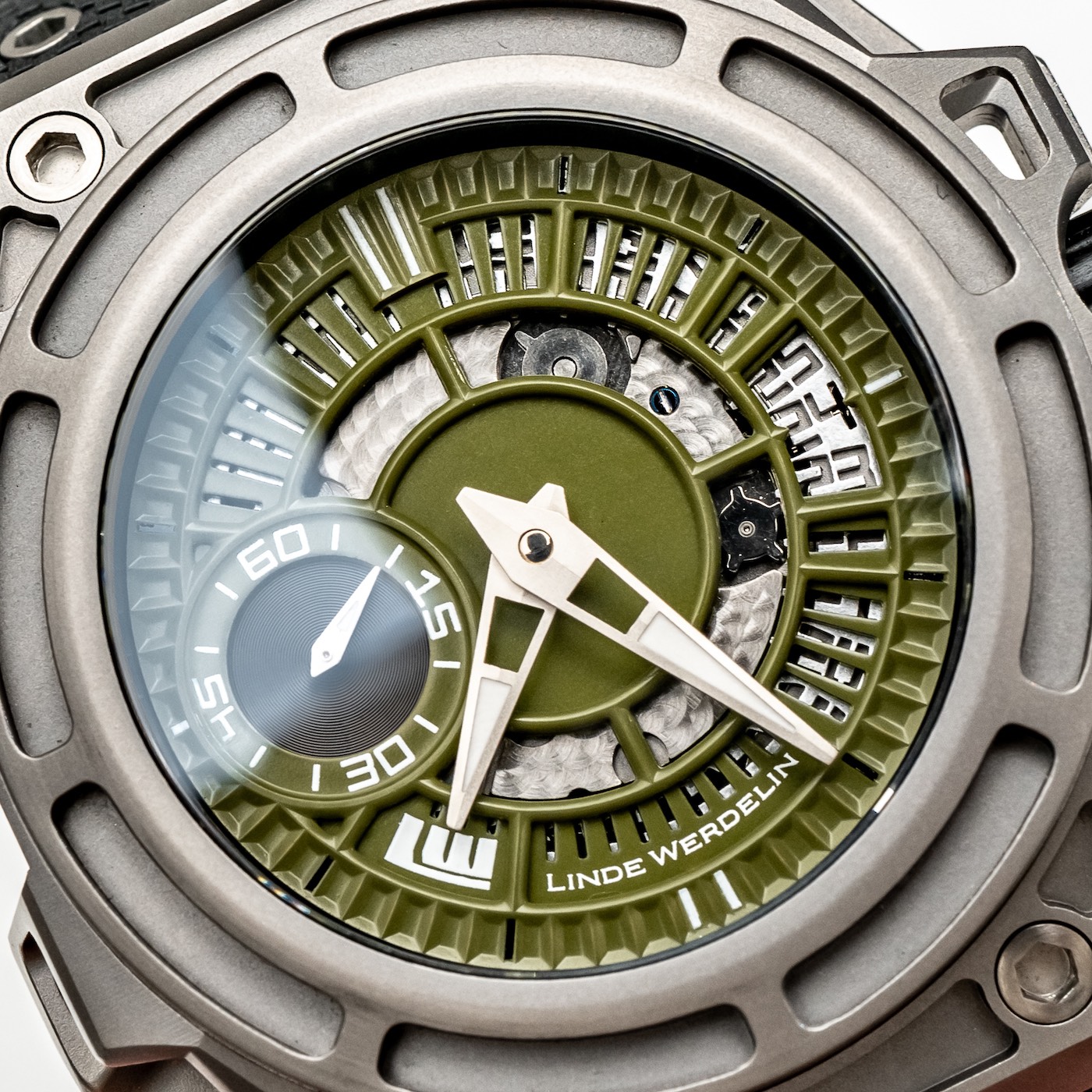 Off the bat, this new Spidolite fixes one of the biggest issues I have with some existing pieces in the colletion: legibility due to highly skeletonized dials. For example, the SpidoLite 3DTP we reviewed some years ago was quite difficult to read. Now, there is a two-part skeletonized dial with the upper section in green and lower section having Côtes de Genève work. This makes a drastic difference in legibility and overall aesthetics, again proving that sometimes less isn’t always better. While over-skeletonization doesn’t fall into what I’ve dubbed “pathological minimalism,” it is certainly a problem of its own kind that is pervasive in the industry. 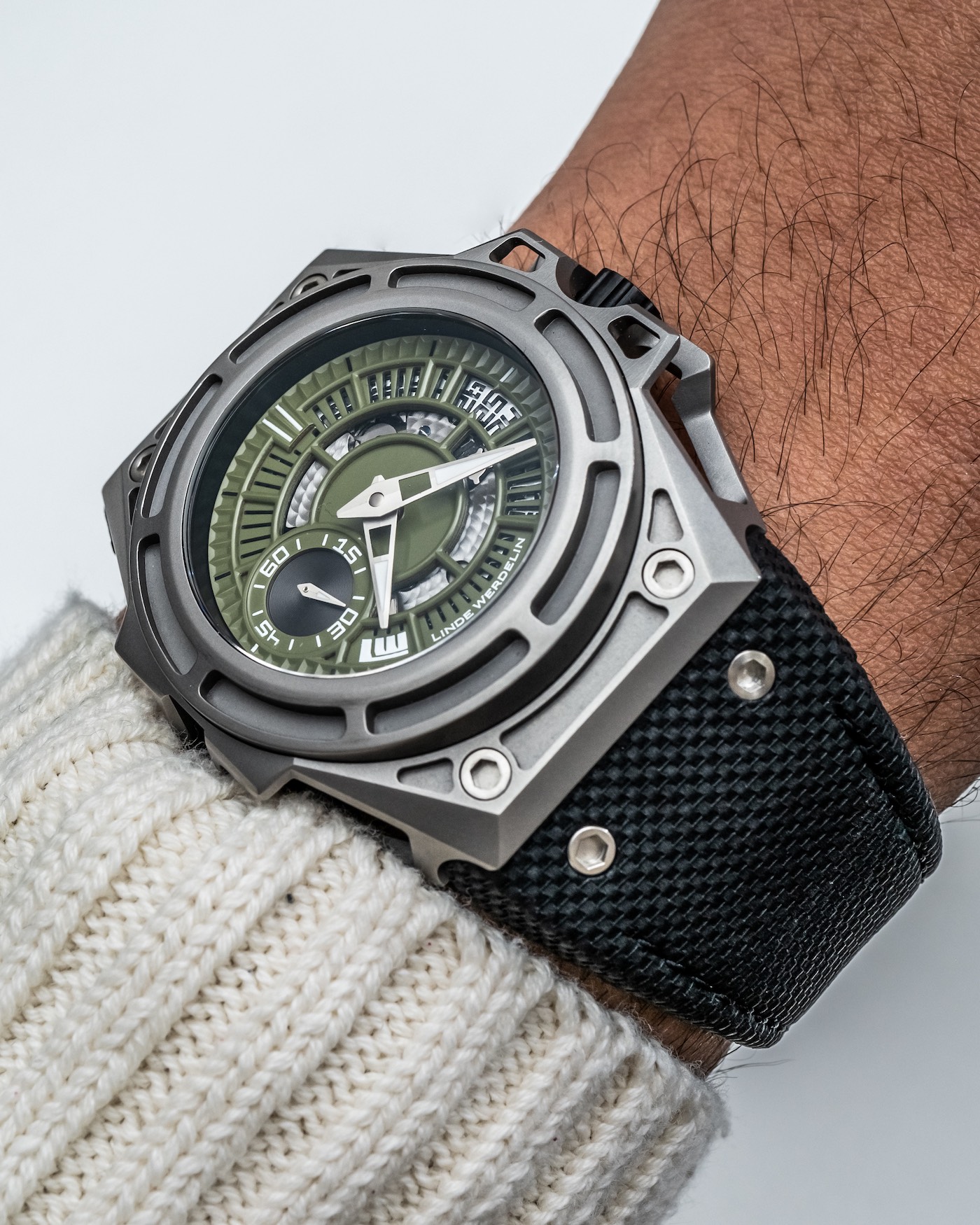 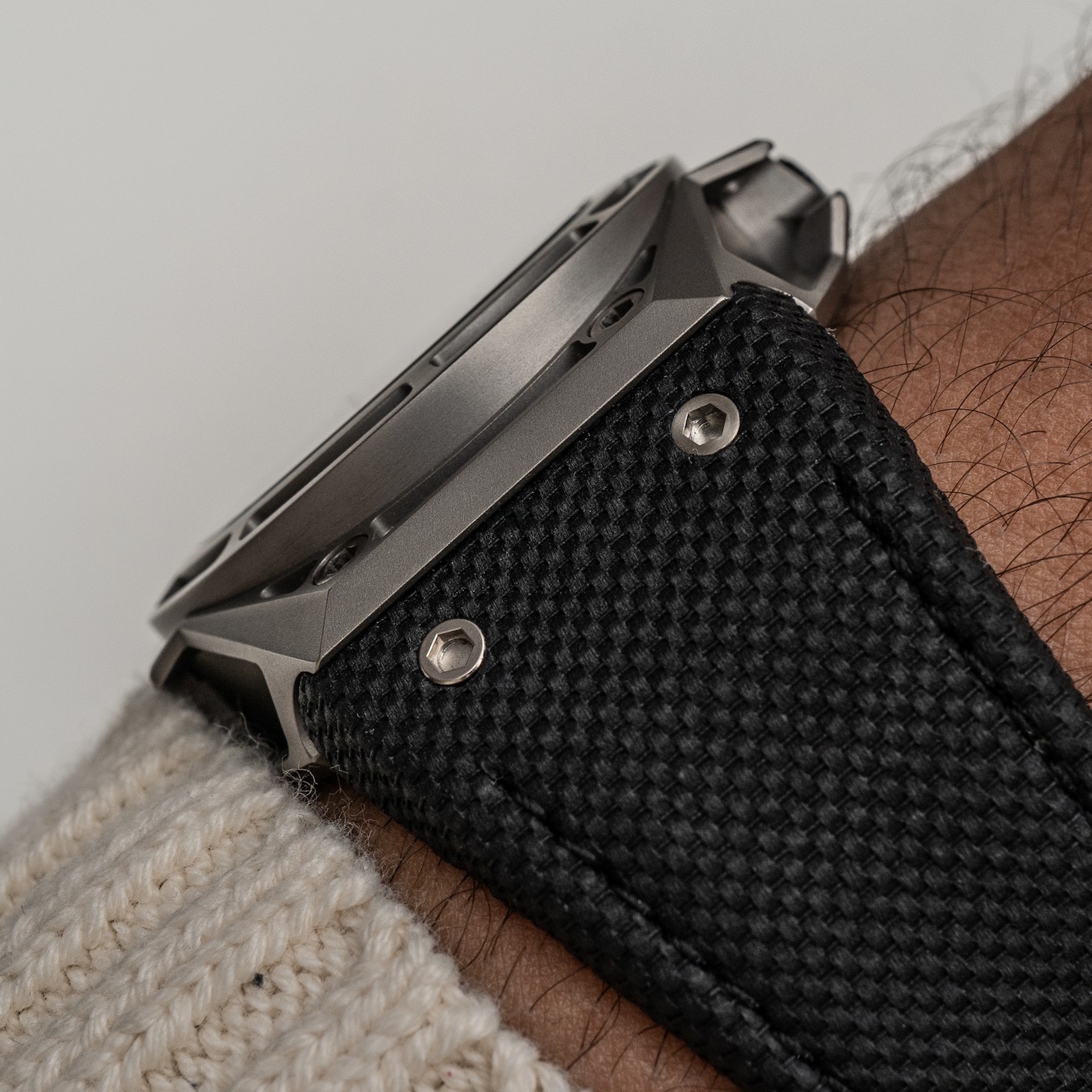 The case of the Spidolite is water resistant to 100M and measures 44mm-wide and 15mm-thick. This is is on the bigger side, for sure, but the lug-to-lug of 48mm is just as important a measurement — note that Linde Werdelin states case length at 46mm, which I believe is the lug-to-lug from the back of the case. For comparison, the 42mm Audemars Piguet Royal Oak Offshore is thinner at 14.1mm thick but has a substantially larger footprint at nearly 54mm lug-to-lug. 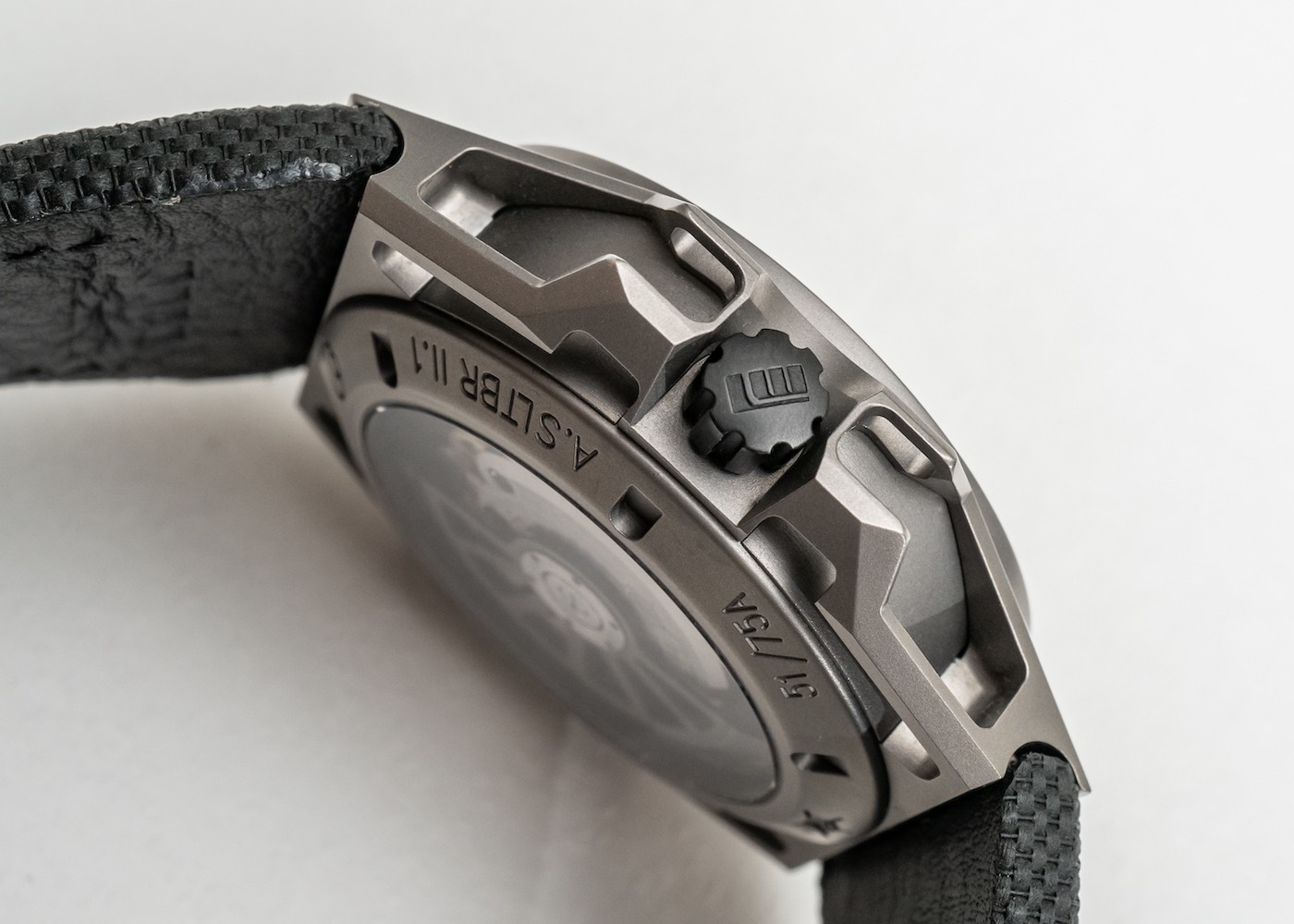 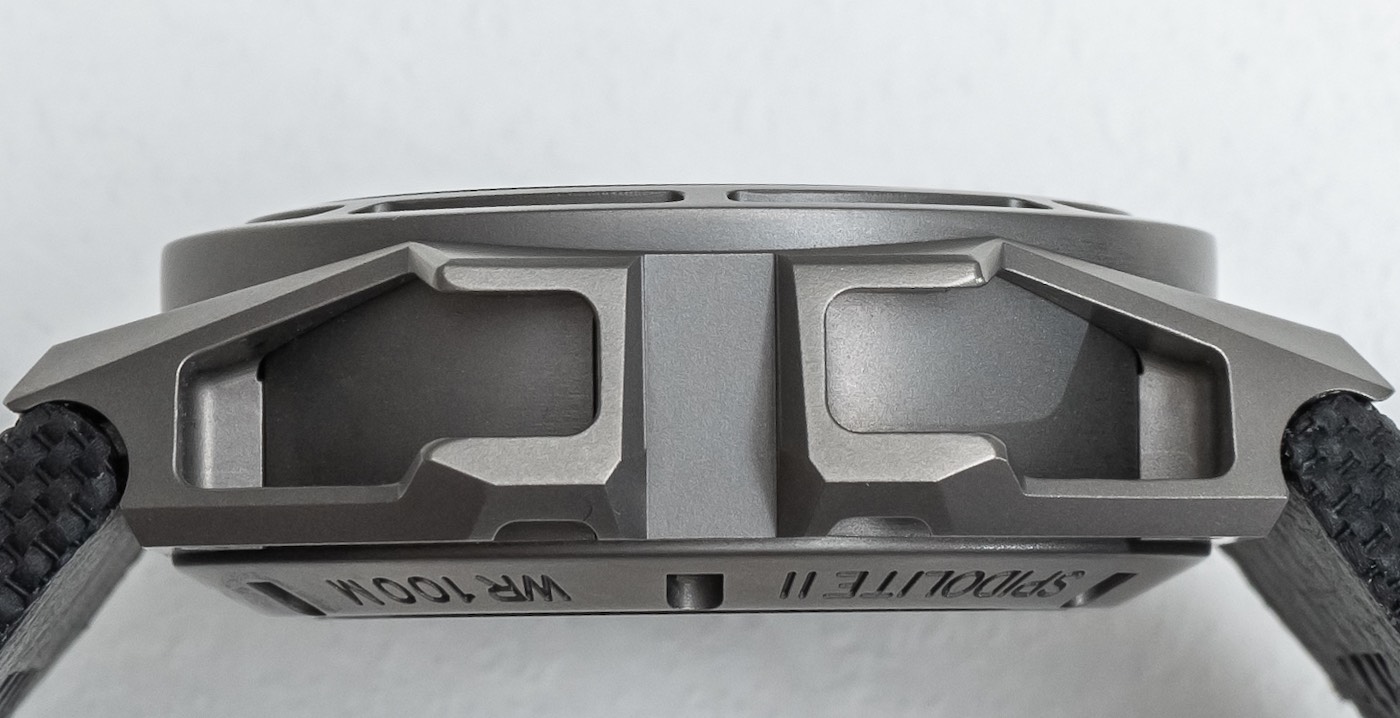 The highly stylized architectural case of the Spido is a huge part of why I love this watch. The lines, angles, and shapes all come together for a look that’s like no other, while not coming off as trying too hard. The Linde Werdelin design DNA is strong and deeply established in its product line, something only a handful of brands this young can claim. Love it or hate it, there will never be enough watches produced for critiques from the masses to ever really matter. 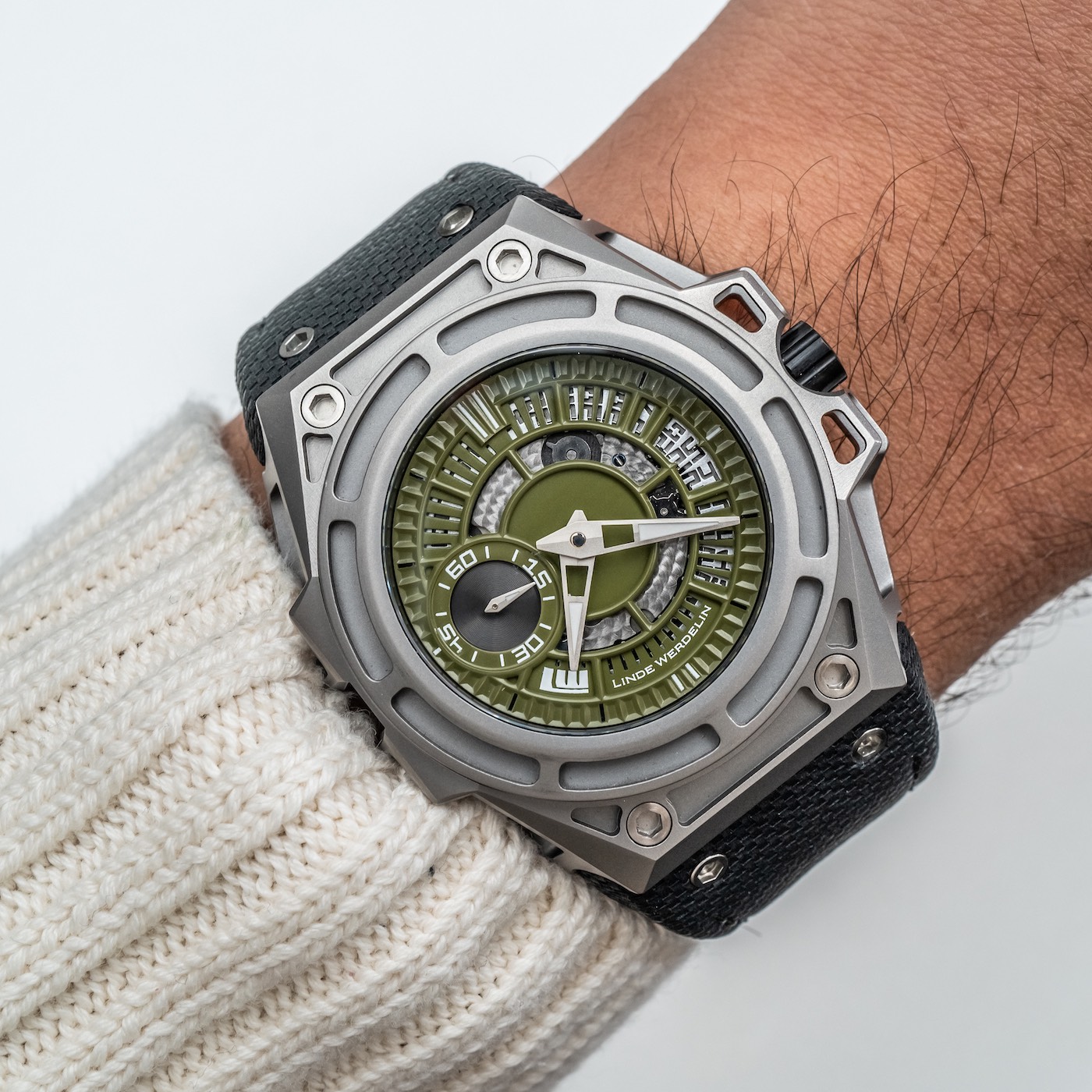 In reality, the “ears” on either side of the case are vestigial since the original Spido was designed, in part, to attach the Linde Werdelin Land Instrument (aka The Rock) to the case. The Rock was a sensor-based computer that attached onto the Spido and collected data, had GPS, and included other functions, such as a frostbite warning alarm. These have been discontinued (as well as their diving computer sibling ‘The Reef’), but the case of the SpidoLite Titanium stays true to the originals. 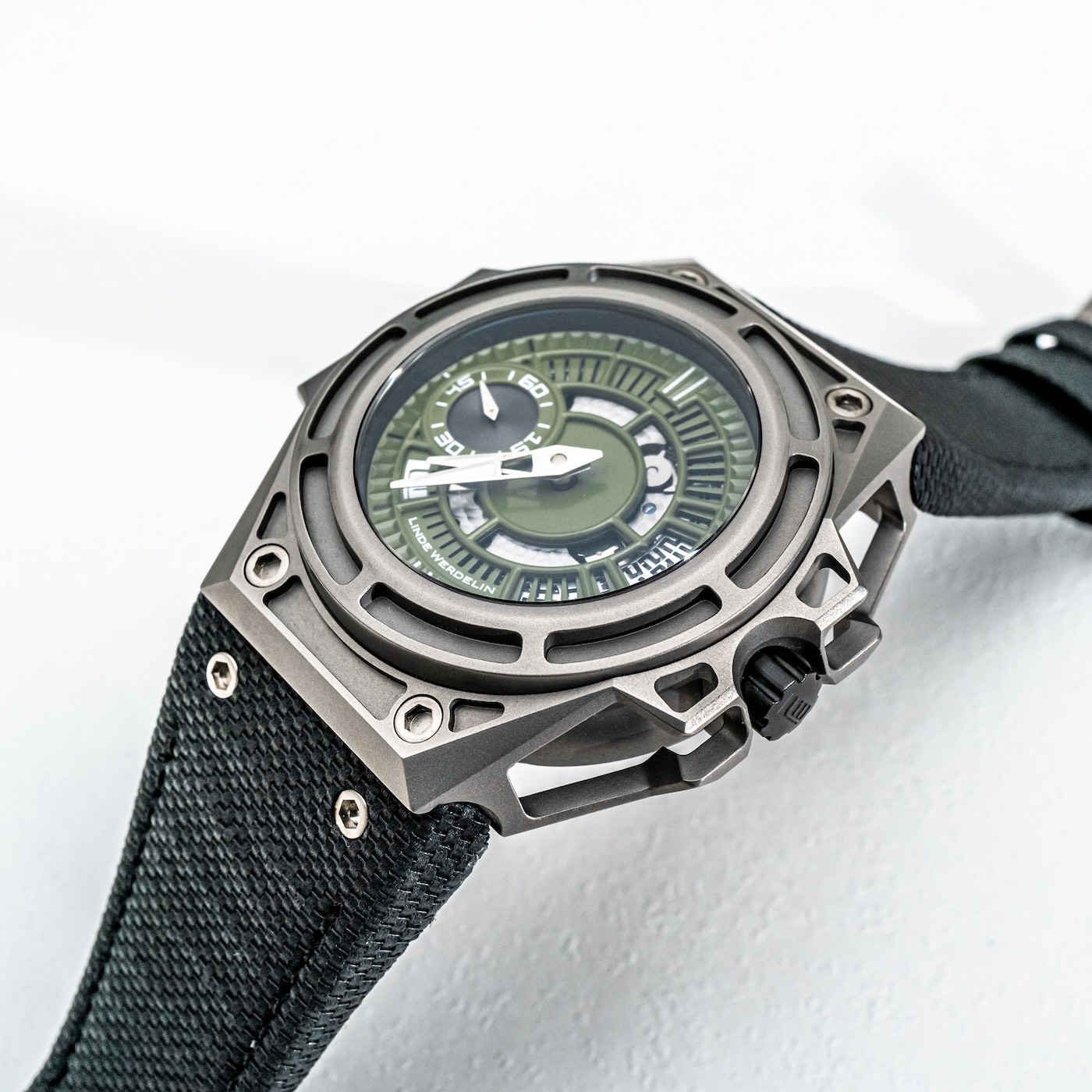 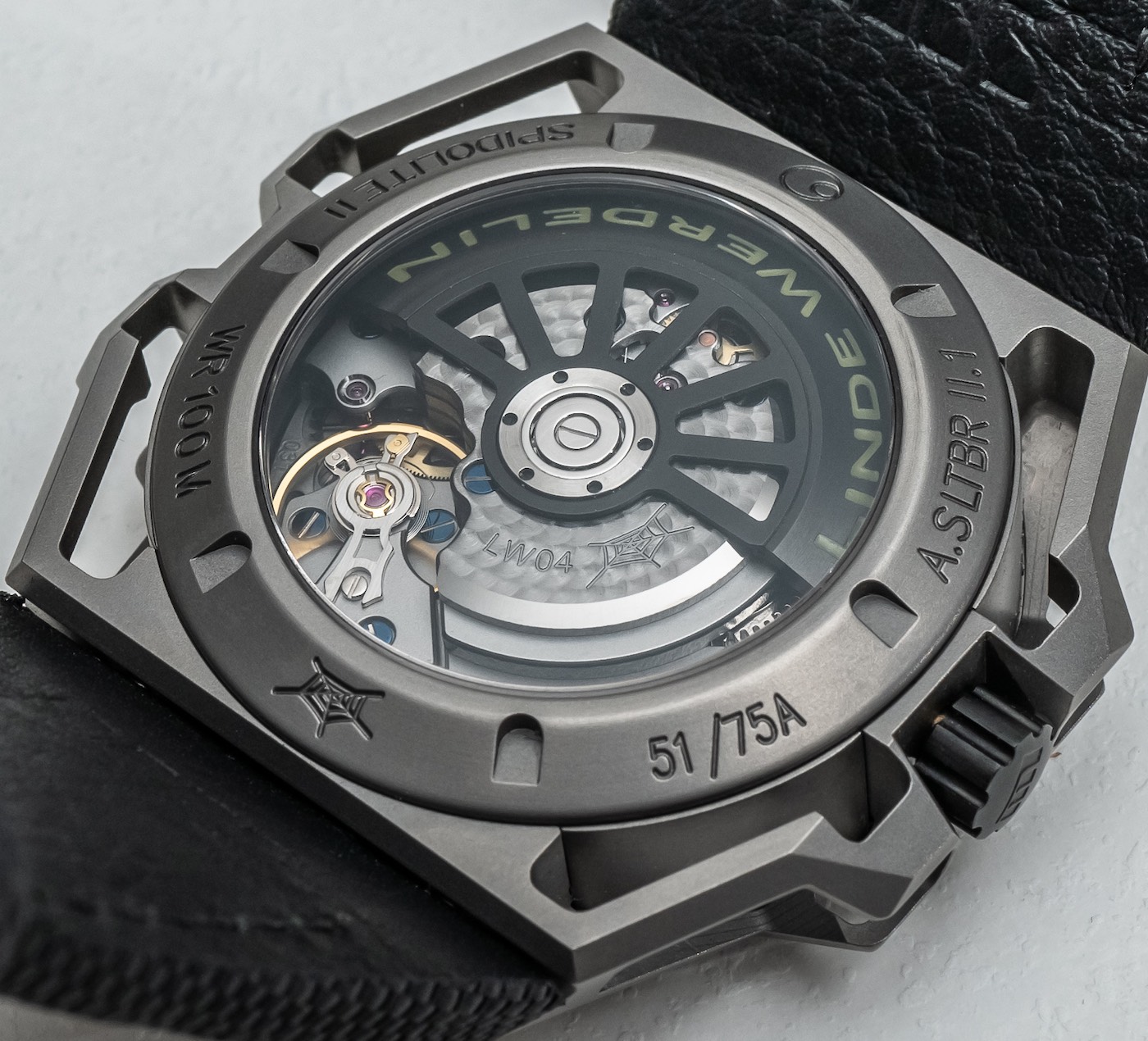 Seen through the exhibition case back is the LW04 movement by Concepto. With ceramic bearings and a skeletonized rotor, the LW04 has long been a mainstay in the collection. It operates at 28,800 vph and has a 40-hour power reserve. I think it’s reasonable to expect that LW update the LW04, as it’s getting a bit long in the tooth and consumers are used to seeing longer power reserves from contemporary calibers. 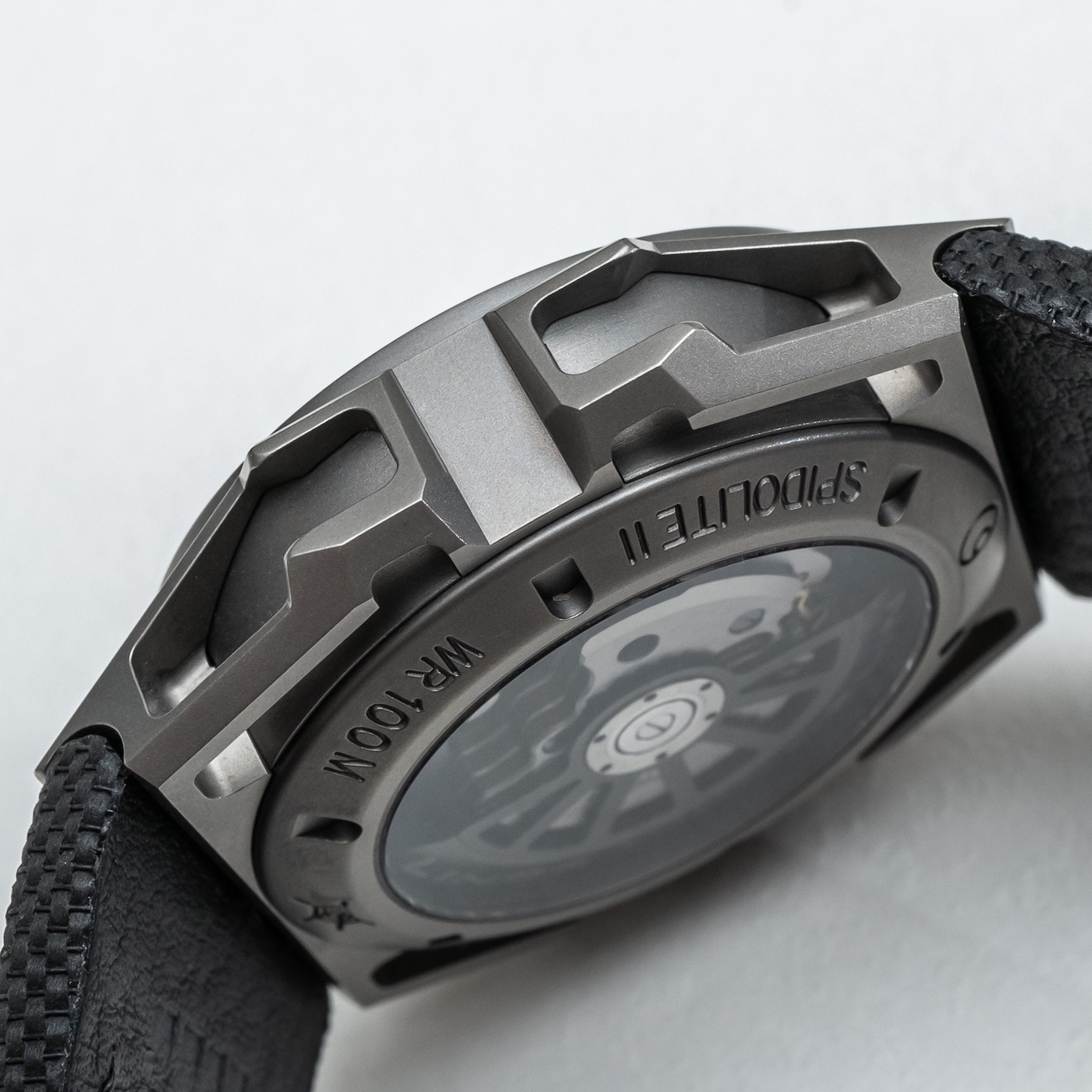 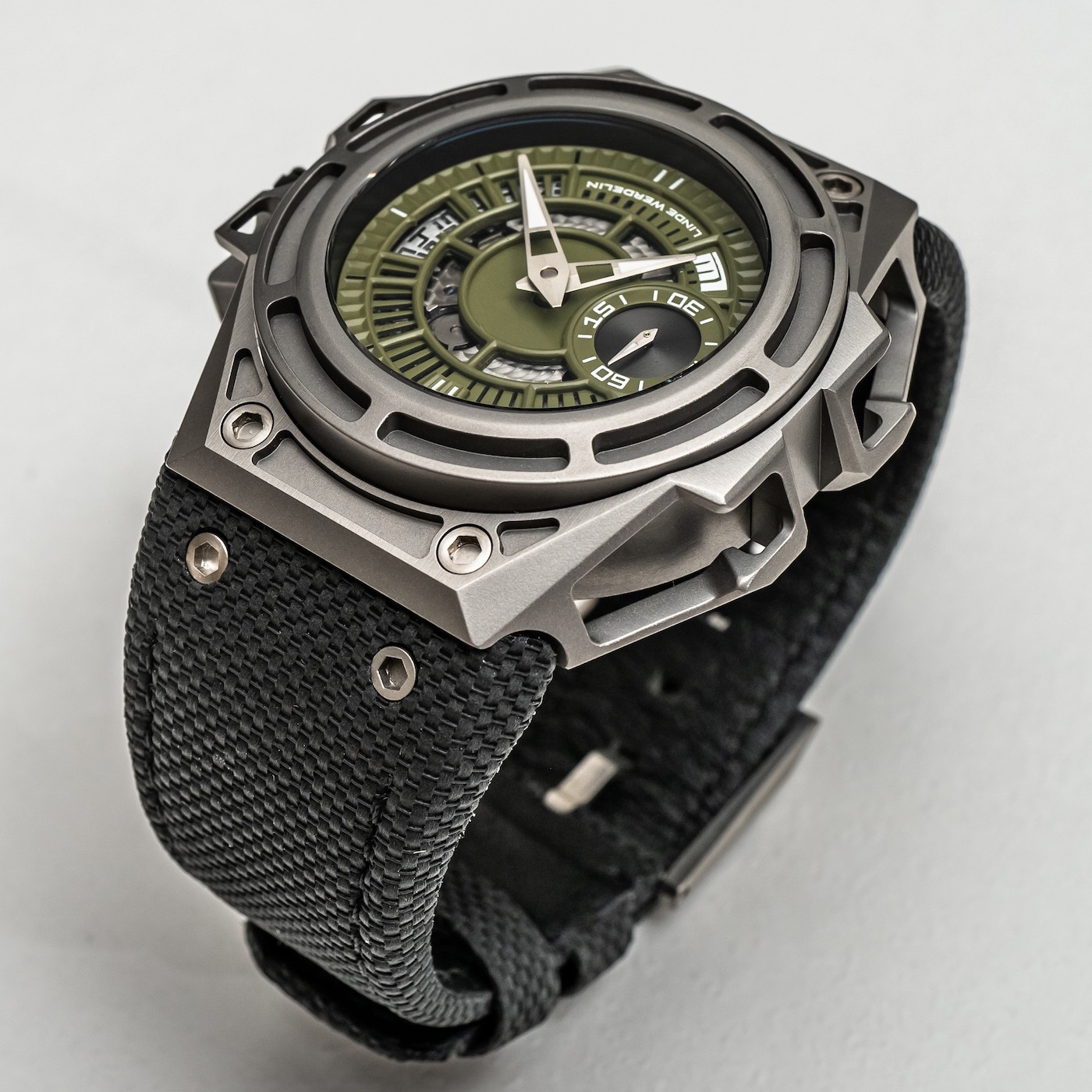 The Linde Werdelin SpidoLite Titanium in Summit Green and Arktis Blue both breathe new life into the collection and create some necessary thematic consolidation. The matte green dial adds an earthiness that I never knew Linde Werdelin was missing, while the improved legibility has a multiplier effect on the overall success of the design. You could call it the “thinking man’s *insert audacious sports watch here*” if it helps to categorize the green SpidoLite. For me, it’s the best iteration of the Spido to date and a hopeful sign for things to come. Linde Werdelin is making 75 pieces of the SpidoLite Titanium in Summit Green and 75 in Arktis Blue, with each piece made to order at a price of $10,480. You can learn more at lindewerdelin.com. 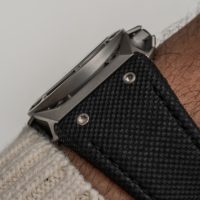 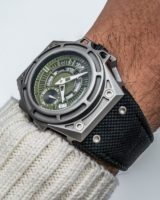 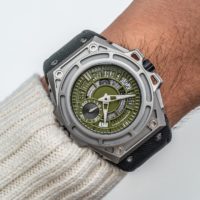 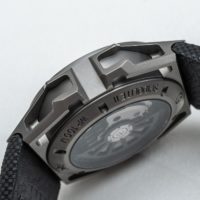 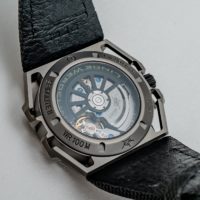 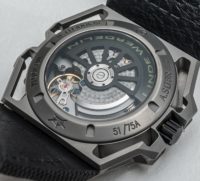 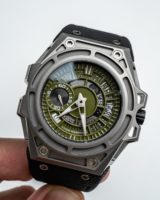 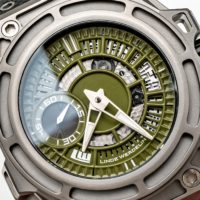 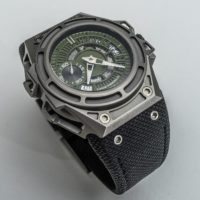 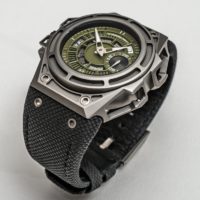 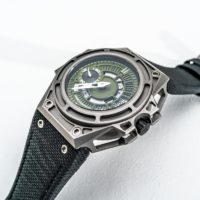