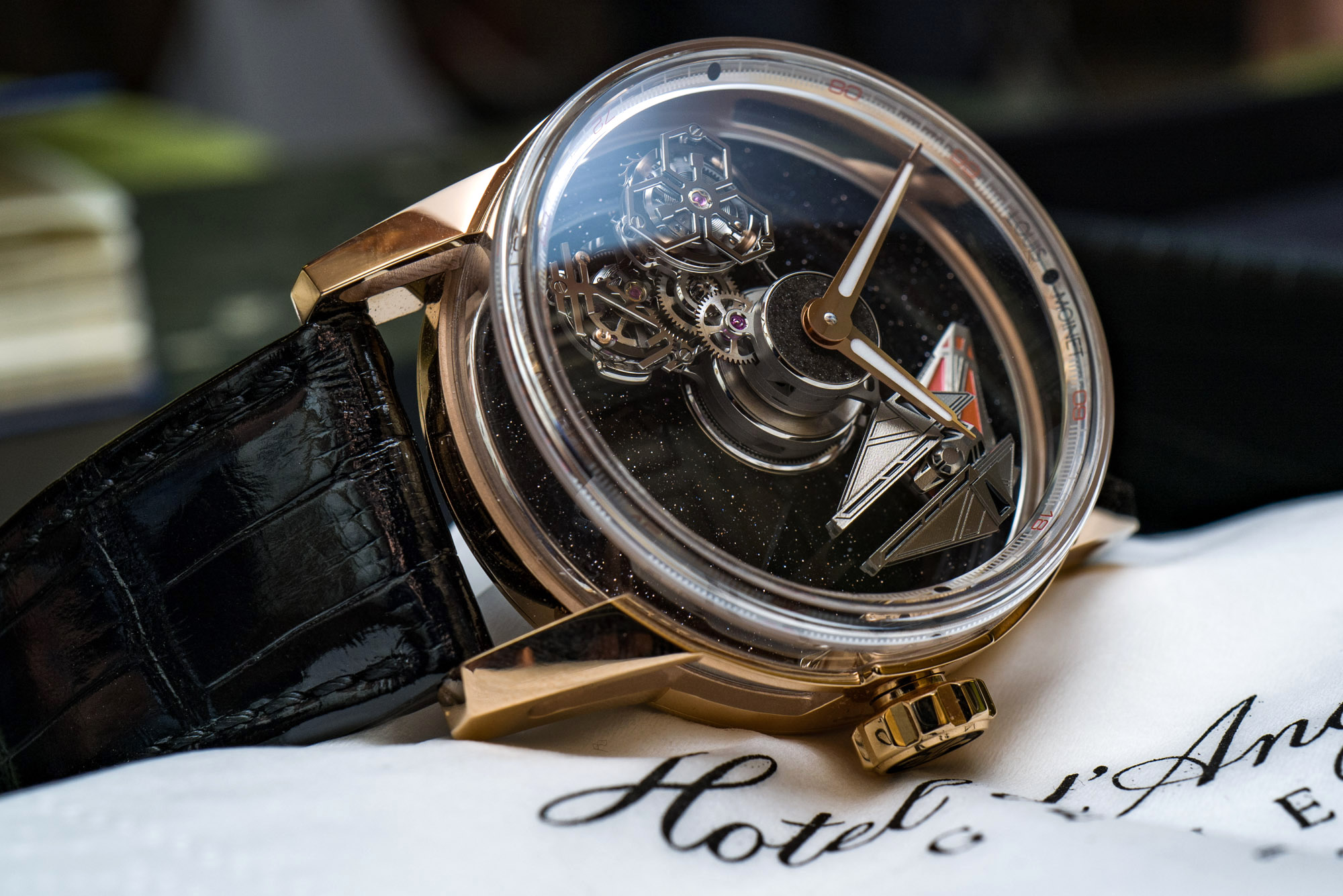 Over the past several years, boutique haute horlogerie brand Louis Moinet has turned its attention increasingly toward what’s probably best described as “high-complication spectacle” in its designs, creating yet more fanciful concepts in the process. Its latest release, the limited-edition Louis Moinet Space Revolution watch, takes this trend to the extreme, creating what the brand claims is the world’s first flying satellite double-tourbillon with each tourbillon rotating in opposite directions. Check the video below to see that in action. 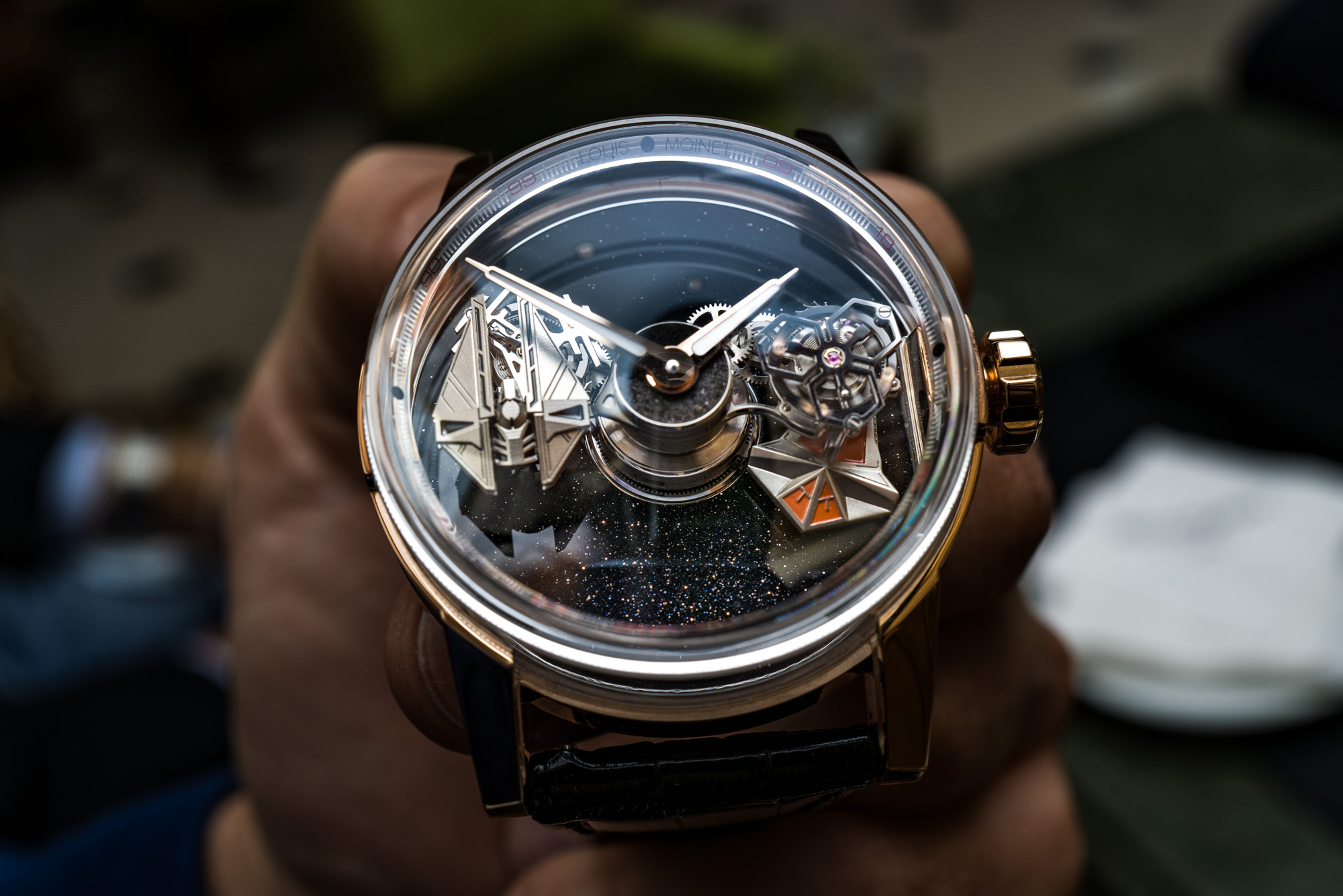 While the sight of two orbiting flying tourbillons is dramatic enough (the sort of visual drama that only exists in ultra-high-end watchmaking), Louis Moinet knows the obvious: The fortunate folks buying this sort of a watch are always on the hunt for the most entertaining and the first-ever. Hence, the spaceships and the opposed direction of rotation. You see, over the last 20 years that the company has been run by the exceedingly passionate Jean-Marie Schaller (it takes all of 30 seconds for one to accurately assess his immense dedication to the legacy of Louis Moinet), the brand has crafted multiple space-themed, dinosaur-themed, and, yes, old-school watch complication-themed ultra-high-end watches. At Geneva Watch Days, Louis Moinet had a mighty impressive presentation of many of its sci-fi and Jurassic-inspired watches created over the years. 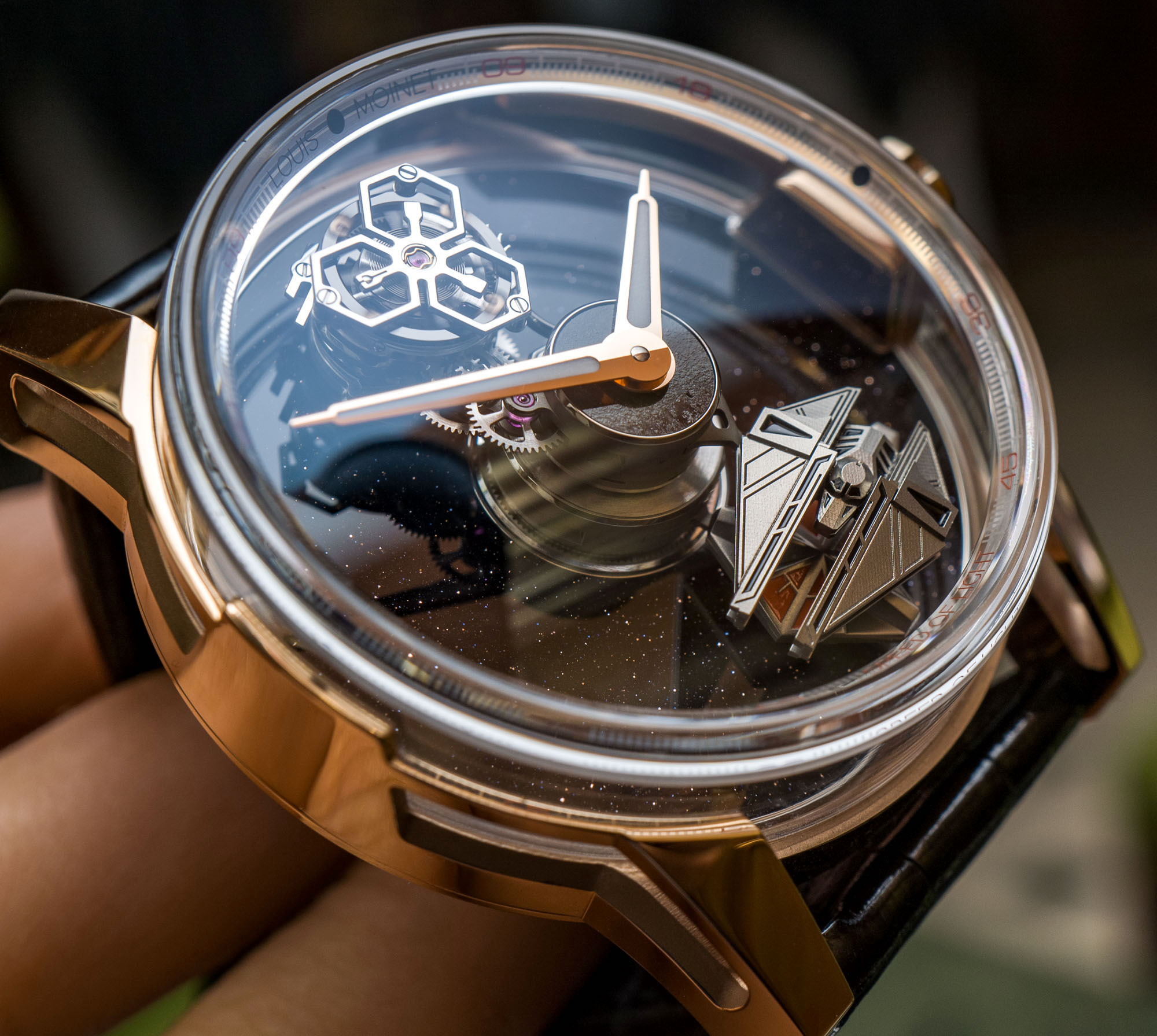 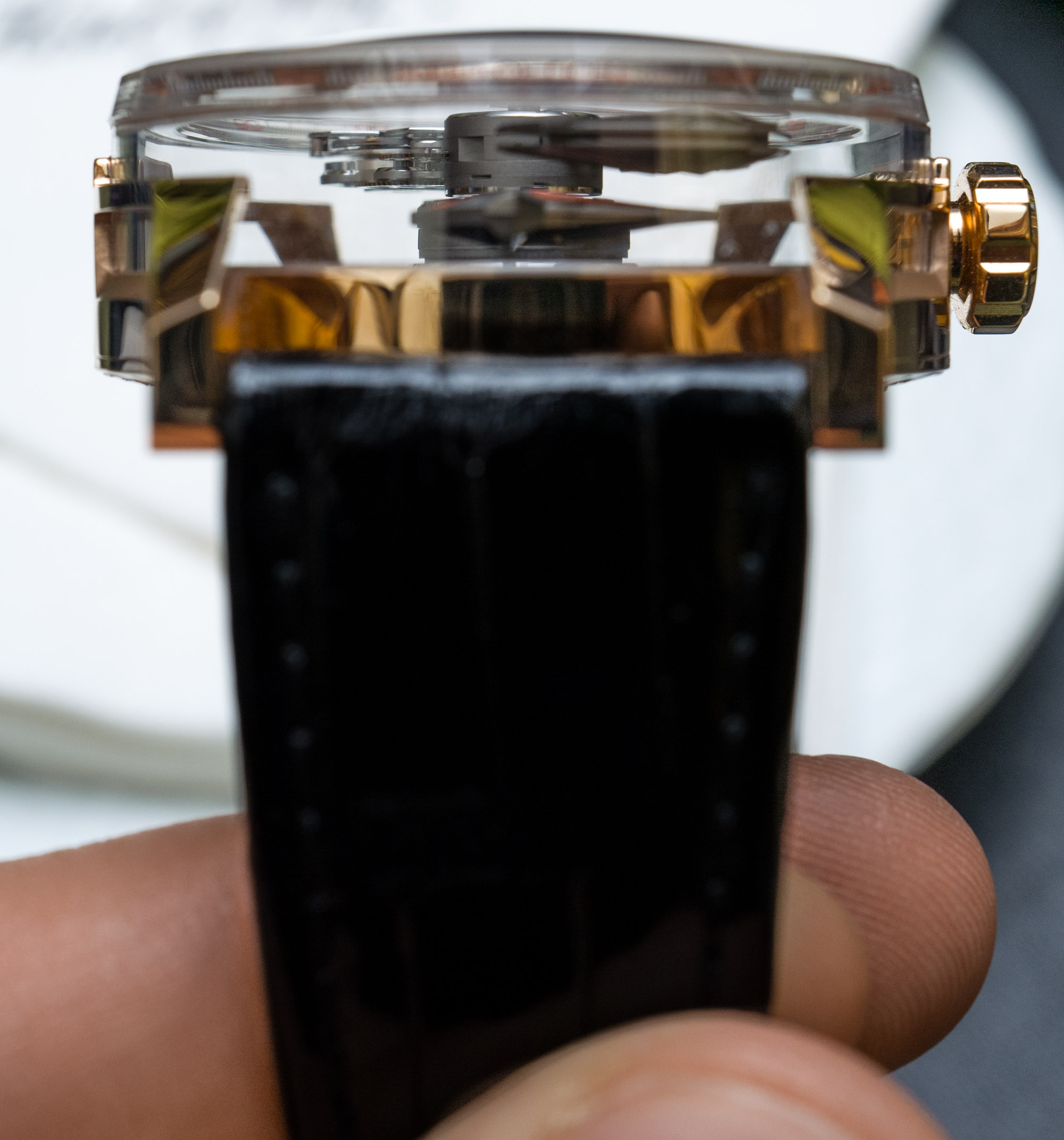 Like so many haute horlogerie show pieces, the immediate impression of the Louis Moinet Space Revolution’s 43.5mm 18K rose gold case on the wrist is one of immense bulk. It’s a thick watch, no surprises there, but it is also clearly meant to be a wrist-mounted kinetic art installation as much as it is a functional timepiece. So basing a judgment solely on wearability feels a touch disingenuous. Its journeys are probably going to be from a massive estate’s main entrance to three-star restaurant, and back — and who cares about heft then? 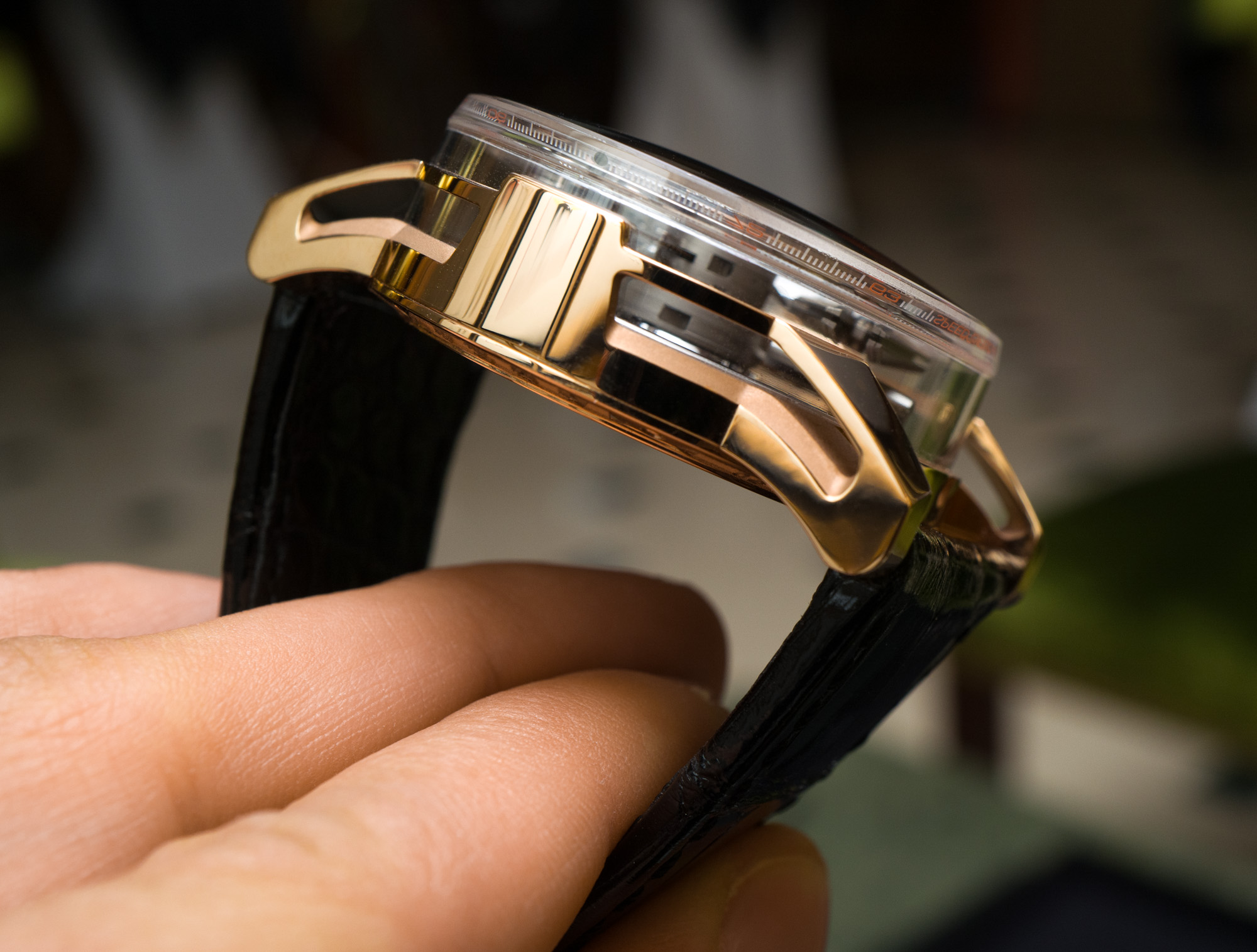 Beyond that, something this wilfully spectacular is not meant be hidden under a shirt cuff. The gold alloy that Louis Moinet uses here is far more yellow than most rose gold applications, appearing almost like traditional gold with just an added drop of warmth. In practice, however, the angular, open-worked form of the gold case itself could be described as an outer frame, surrounding a massive sapphire crystal box designed to give as unobstructed a view as possible of the mechanics within. This approach changes slightly around back, where the sapphire display window is interrupted by an oversized toggle switch that swaps the crown between winding and time-setting functions. It’s an unorthodox touch, to be sure, but there’s something about the hefty and aggressive feel of it that’s viscerally satisfying. It also reminds us of the oil rig-inspired, animated Louis Moinet Derrick from the recent past. 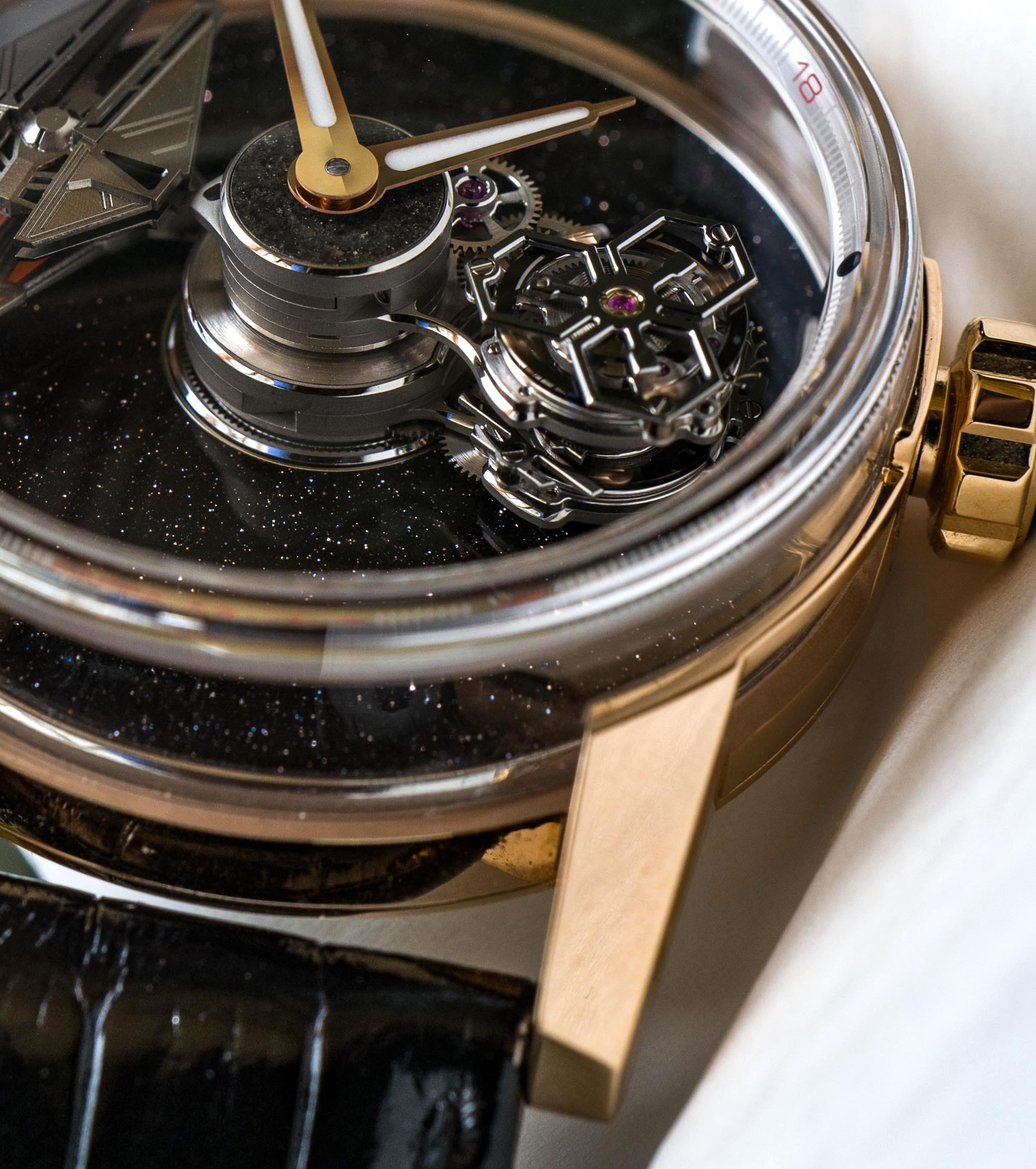 Naturally, the dial, or rather the entire front, of the Louis Moinet Space Revolution is the real focal point. As the case might suggest, this is a design with immense visual depth, both perceived and actual. With two flying satellite tourbillons stacked one on top of the other beneath the rounded syringe handset, this is a genuinely tall stack, one that uses the extra viewing angles afforded by the sapphire box to maximum impact. The etched sapphire crystal chapter ring visually floating above the rest of the dial helps emphasize this height, as well. 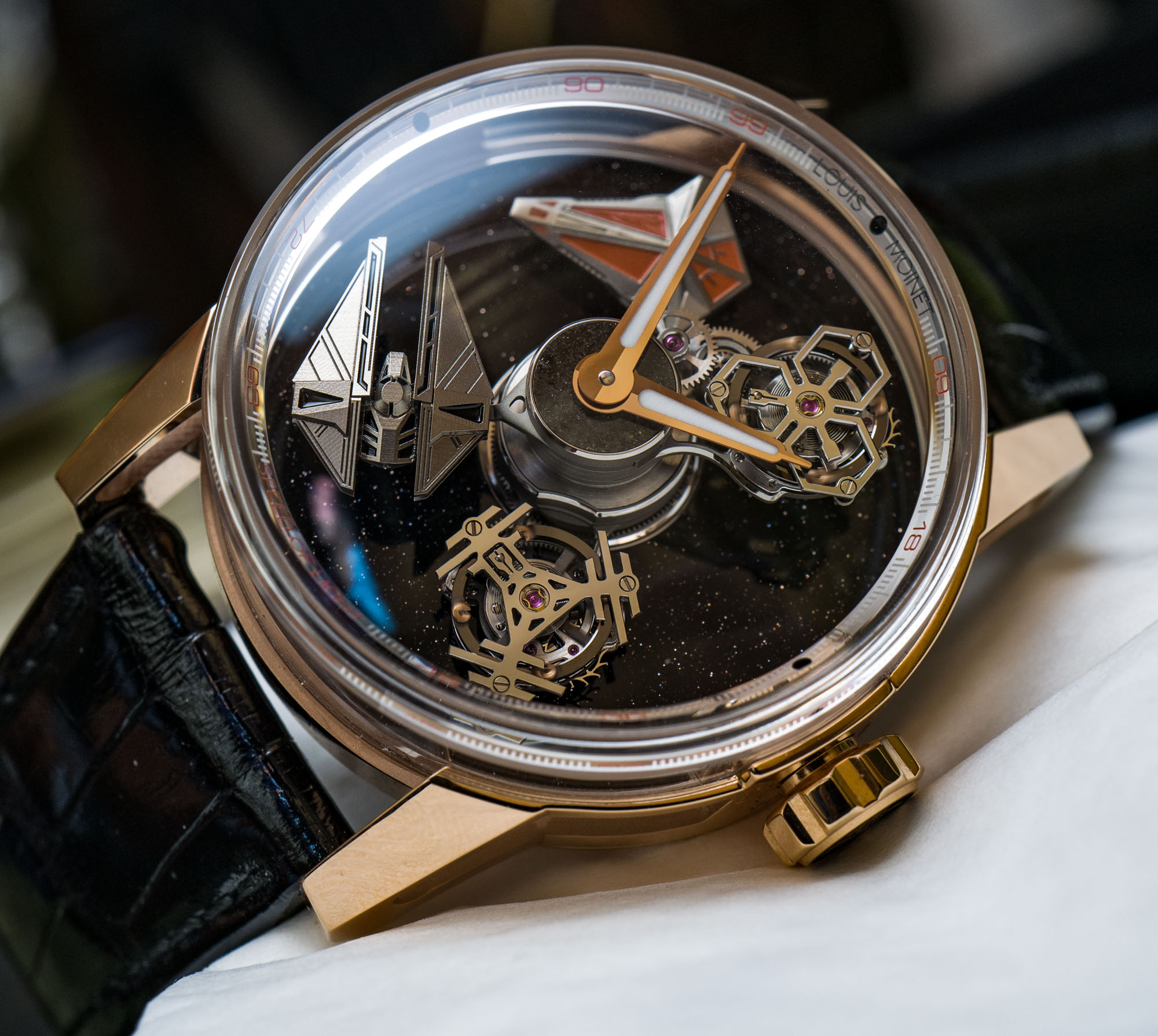 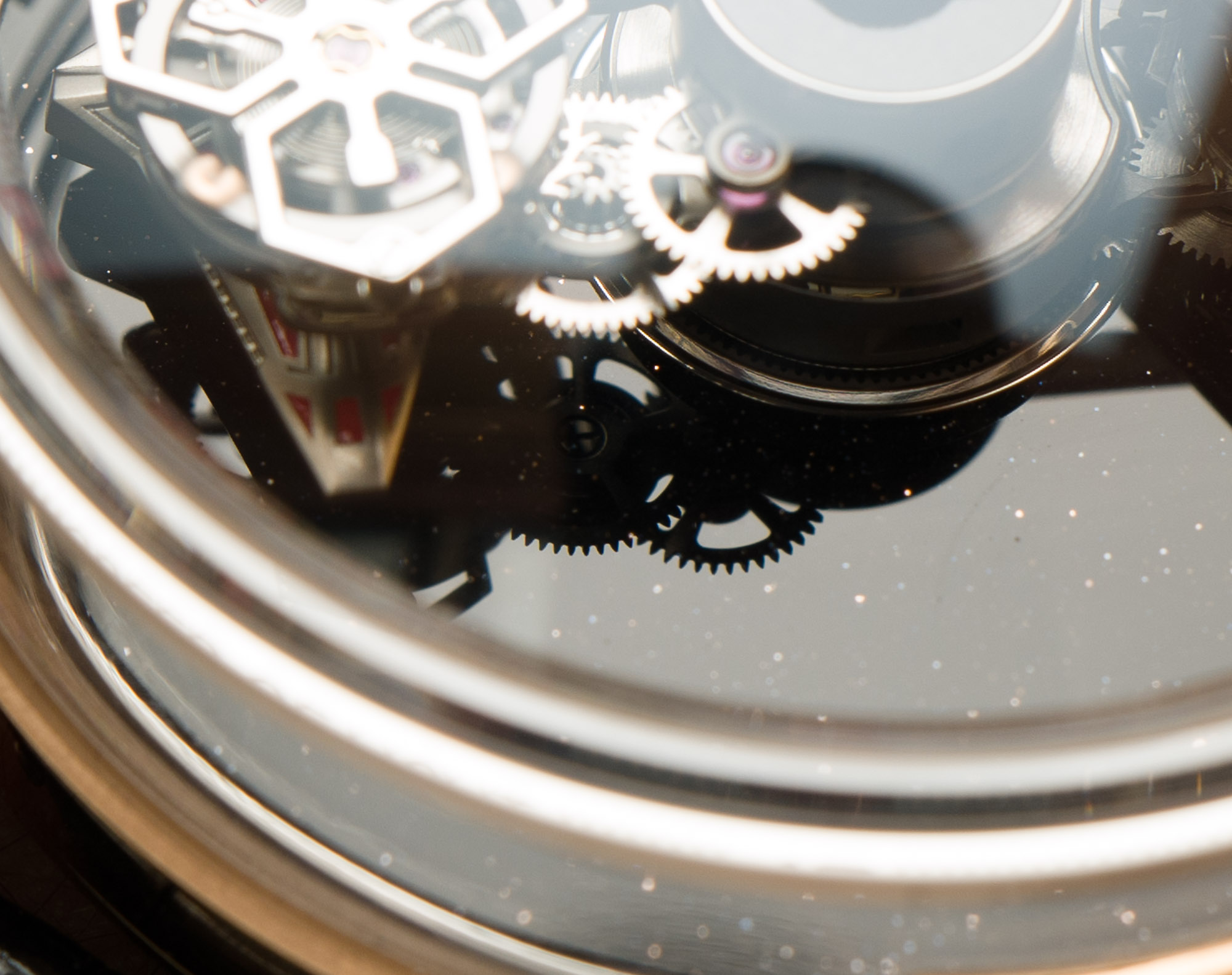 Louis Moinet opts for black aventurine for the main dial surface, with its glittering starry appearance that also gives a mirror-like reflection when held at the right angle – like on the image above. To maximize this outer space effect, the brand says the dial surface is treated with laser nano-structuring to create light-catching wells, further emphasizing the depth of this black backdrop. Of course, the visual highlight of the front is the flying satellite double tourbillon array, which is tuned for entertainment, above all else. While the flying tourbillons themselves rotate once every 60 seconds, the upper tourbillon cage completes a clockwise orbit of the dial once every five minutes, and the lower cage orbits counterclockwise every 10 minutes. This means that they appear to meet at rather random places and times on the dial, making for one of the best animated watch faces out there. A standard double-tourbillon almost looks tame next to this thing. Each of the flying tourbillon cages has its own distinctive shape vaguely reminiscent of drone helicopters, but with enough flash and personality to draw the eye and diversify the two at a glance. There also are flashes of hand-beveled and hand-polished angles on the edges of components – they are the horological laser beams in this space revolution.

The diversity is more striking for the two orbiting spaceships acting as counterweights to the satellite tourbillons. Both fashioned from hand-finished ceramic-coated titanium and weighing in at 0.5 grams each, each ship is markedly different, with a nod toward classic sci-fi. On the video above, just look at the story Louis Moinet (Jean-Marie Schaller) dreamt up to go with the Space Revolution. It well and truly is an animated story rendered 0.5 grams at a time that pays tribute to sci-fi movies new and old. Because, you know, there are more than a handful of sci-fi loving multi-millionaires out there – and they will look at this watch, fall in love with the presentation, and buy it on a whim. 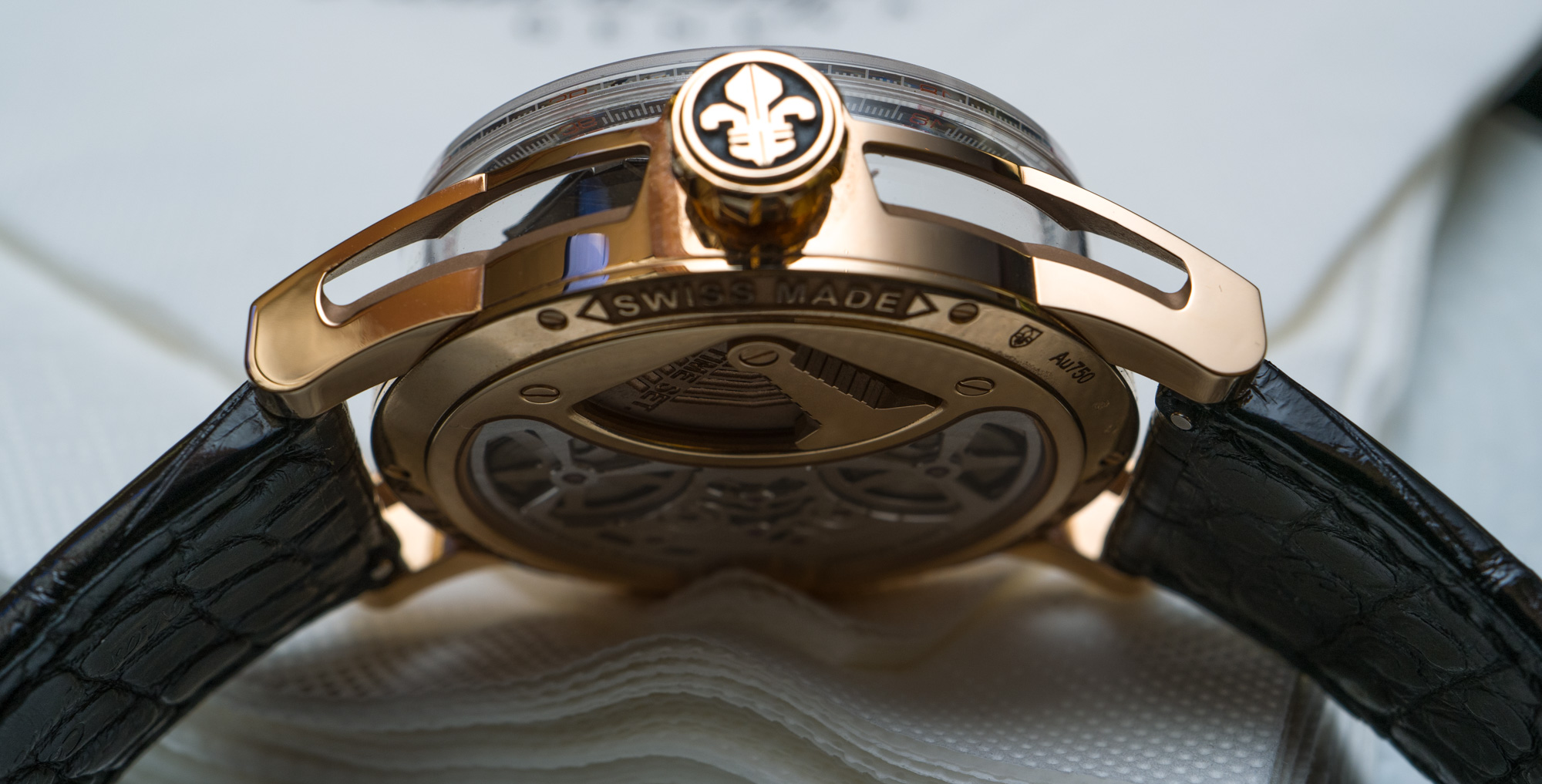 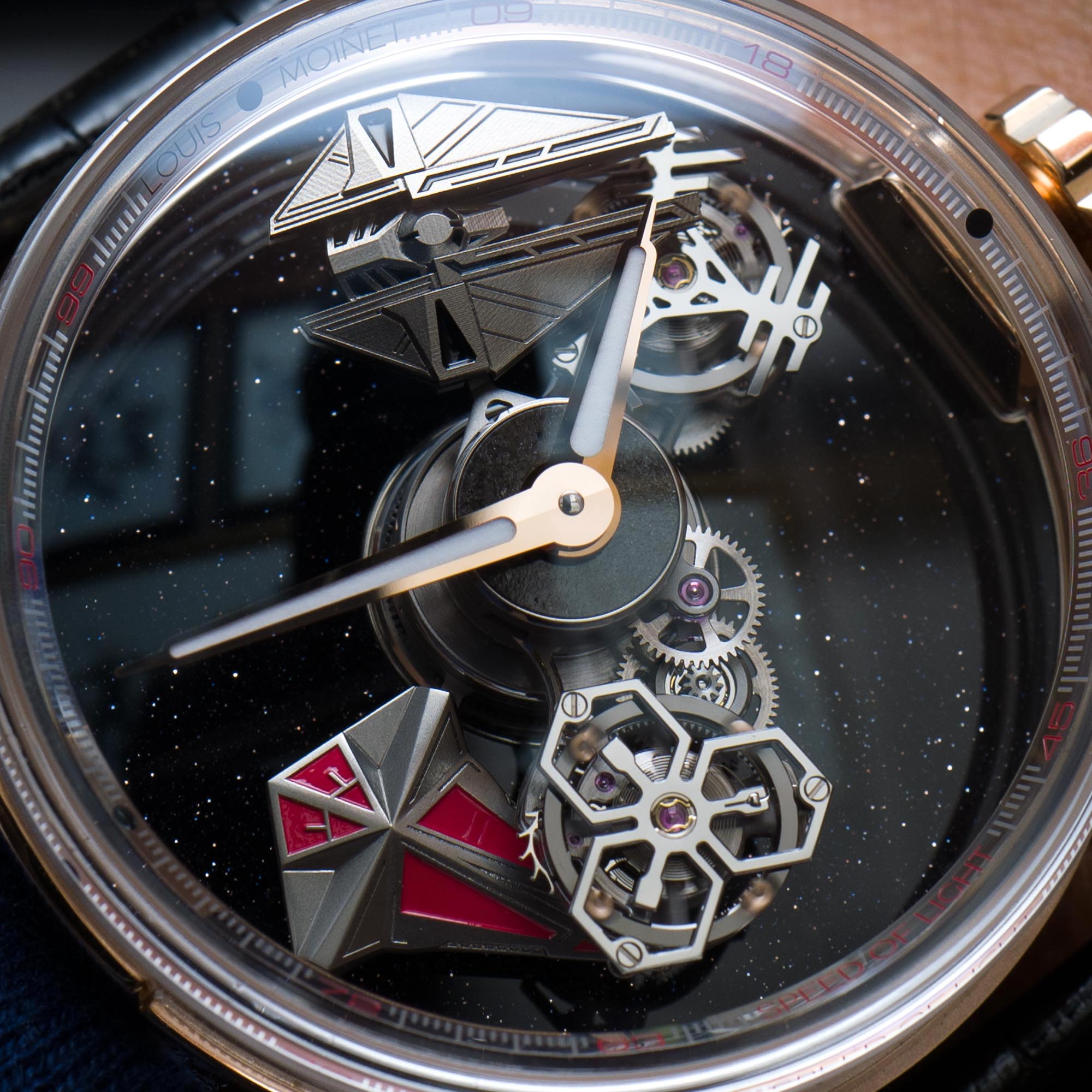 The upper ship has more than a touch of the TIE Interceptor from “Return of the Jedi” about it, while the red-accented lower ship bears more than a passing resemblance to the alien ships from the classic “Star Trek” episode “The Tholian Web.” The high-speed revolutions of these tourbillons around the dial mean the two spaceship counterweights appear to clash 18 times every hour, and move fast enough to be noticeable at a glance – and not just on time-lapse videos. Just as an added cherry on top of this visual feast, the Space Revolution includes a sample of meteorite directly underneath the handset. This stands as one of the watch’s greatest conversation pieces, as each of the eight examples of this limited-edition series sports a different meteorite sample. According to Louis Moinet:

Between the eight individually numbered pieces, these specimens include rock from the moon, another rock from Mars, one example includes a sample from the oldest known rock in the Solar System, and another includes a meteorite containing amino acids, the basic chemical components of life as we know it. 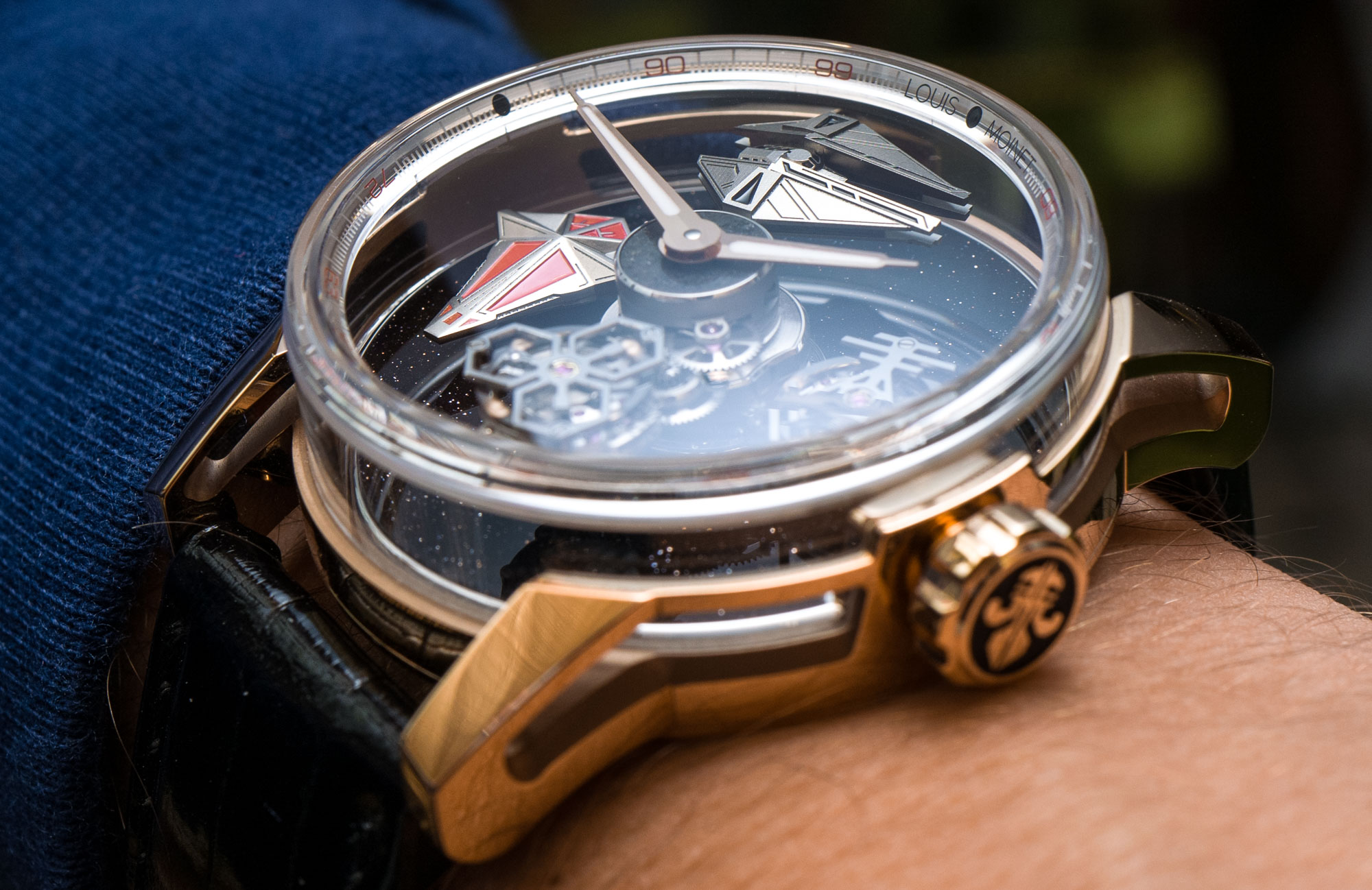 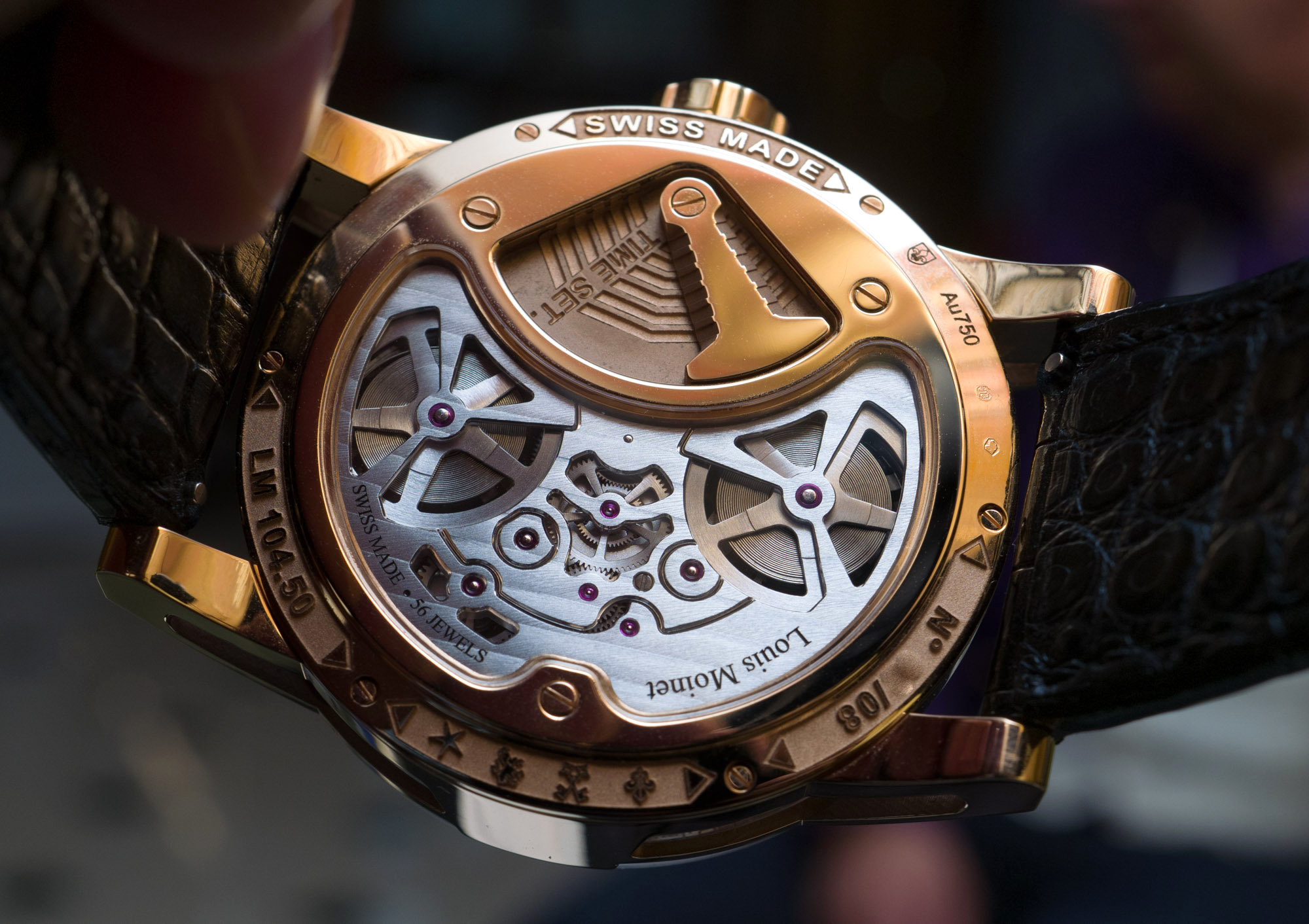 The Calibre LM104 hand-wound flying satellite double tourbillon movement inside the Louis Moinet Space Revolution is remarkably reserved in its decoration when contrasted with the visual spectacle of the dial. The movement features a nearly full bridge, with crisp Côtes de Genève and wide cutouts for the twin mainspring barrels. Driving the two satellite tourbillons and all their related assembly obviously requires quite a lot of torque, but these barrels still provide a respectable 48 hours of power reserve at a 21,600 bph beat rate. To complete the package, Louis Moinet pairs the Space Revolution with a black alligator leather strap and an 18K rose gold fleur-de-lis deployant clasp that is attractive in its own right. 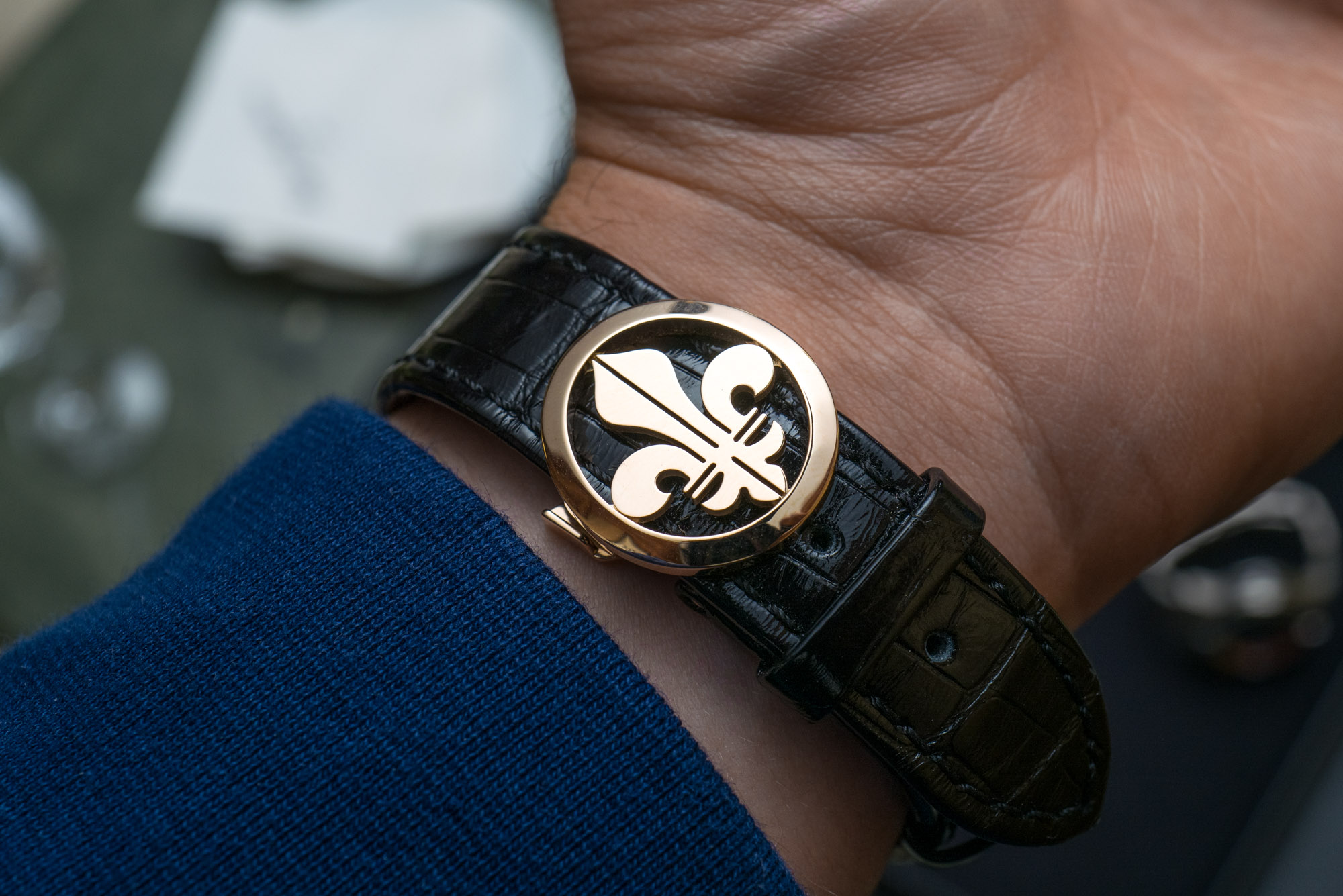 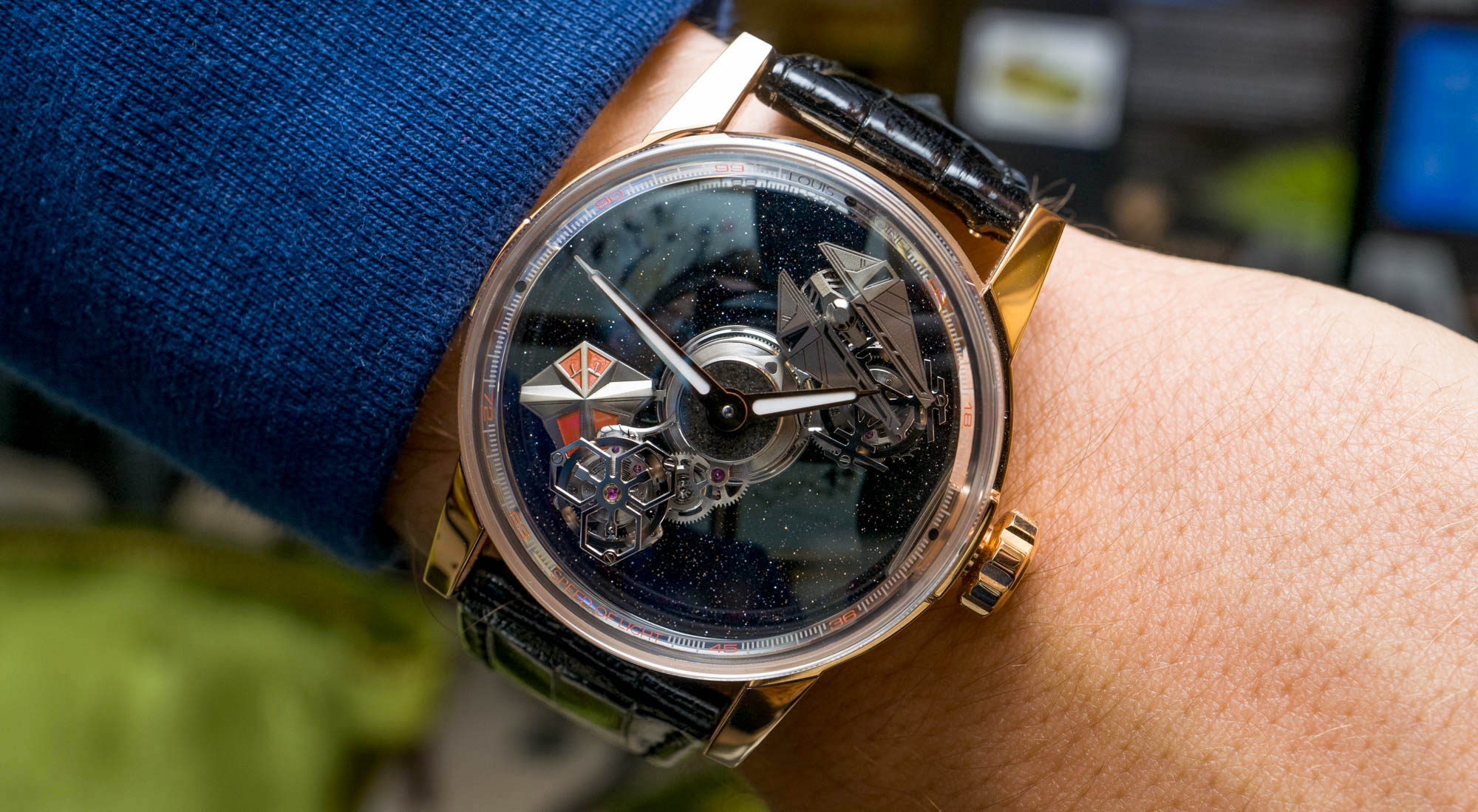 As a breathtaking piece of visual spectacle and as a cutting-edge example of mechanical watchmaking, the limited-edition Louis Moinet Space Revolution stands as the apex of the brand’s trend toward shock-and-awe horology. Only eight examples of the Louis Moinet Space Revolution will be made, available through authorized dealers at an MSRP of $380,000. For more details, visit the brand’s website.