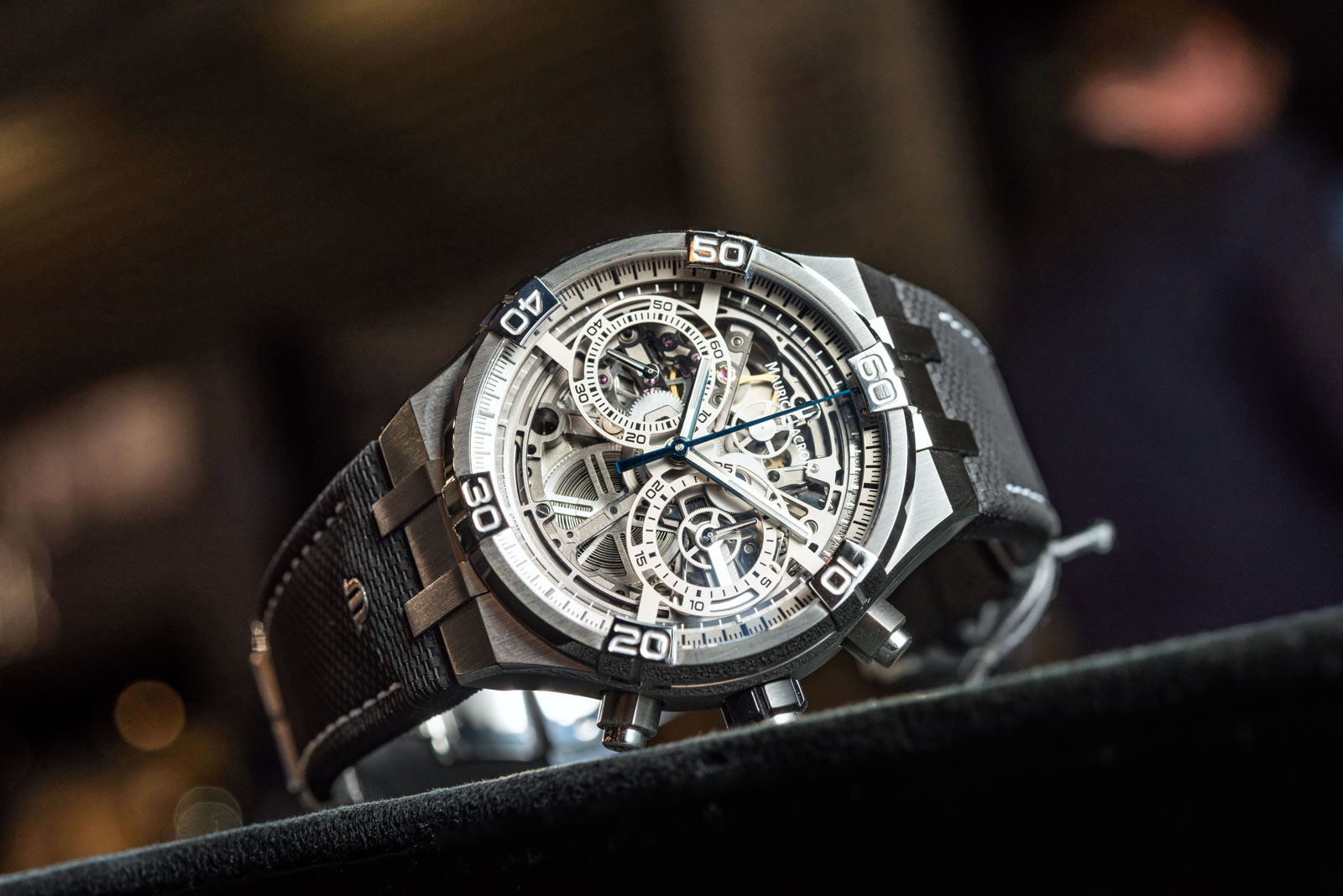 Since its debut in 2016, Maurice Lacroix’s Aikon line has swiftly grown to become one of the most attractive affordable options in the white-hot integrated bracelet sports watch category. As the line has evolved, the brand has spent a significant effort in differentiating the basic design into something with its own unique personality to stand out in a sea of similar concepts. Its latest attempt in this direction is one of the most striking: the Aikon Chronograph Skeleton. Beyond simply adding a skeletonized dial to an existing model, Maurice Lacroix has altered the overall proportions of the Aikon to create something with its own distinctive and striking personality. 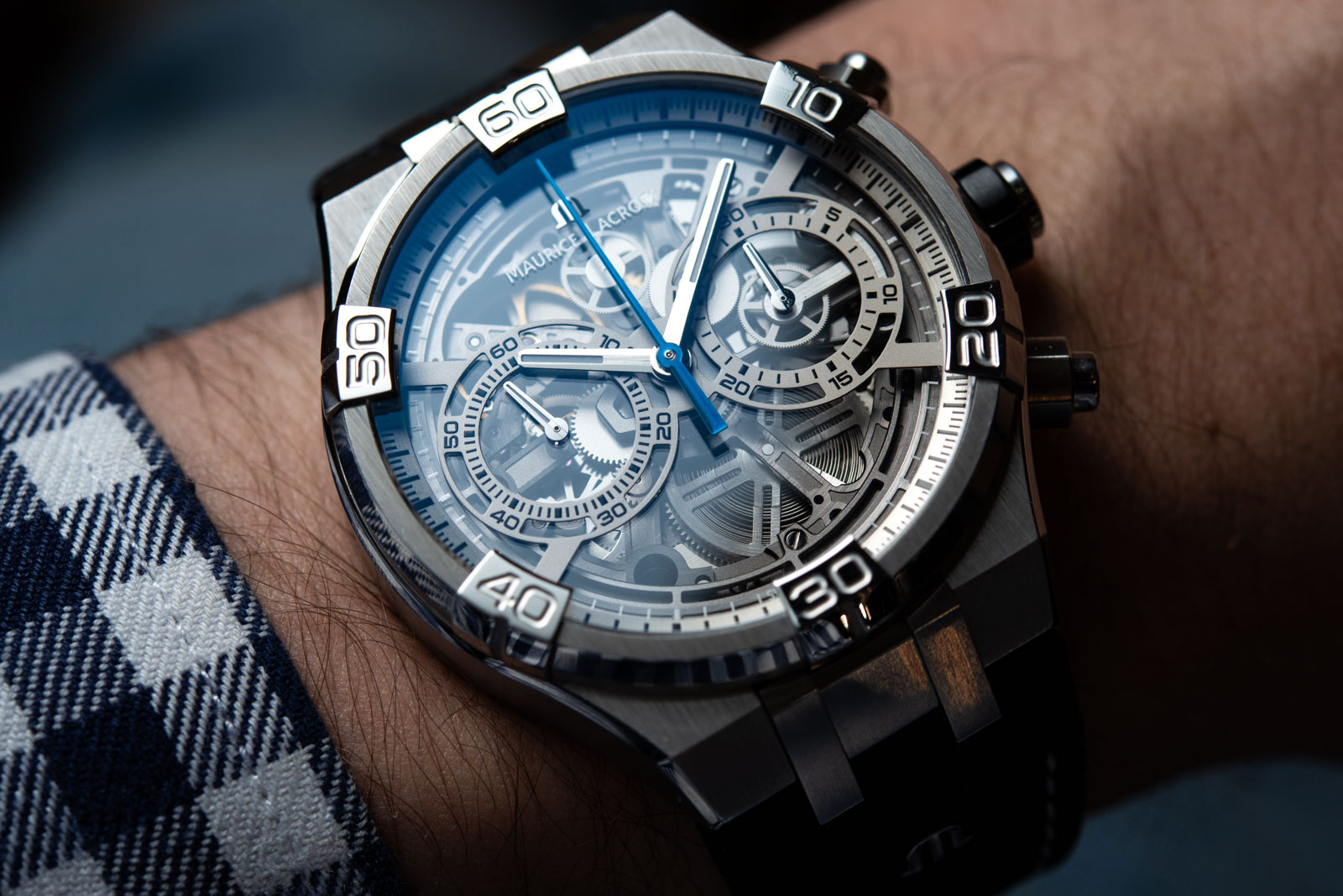 This new personality begins with the 44mm stainless steel case of the Aikon Chronograph Skeleton. Much of the basic architecture, including the sharp, angular main case body with its prominent chamfer, is carried over from previous Aikon models, but the bezel has been restyled to give it some welcome new proportions. In order to give the widest possible view of the new skeleton dial, the bezel is narrower, while the Aikon’s six signature claw-like arms now partially hang over the crystal. On paper, the adjustment is slight, but this change noticeably affects the visual profile of the watch, making the whole package feel yet more modern and aggressive. Impressively for a watch with this much sapphire crystal on display, Maurice Lacroix has managed to maintain a 200-meter water resistance for this case. 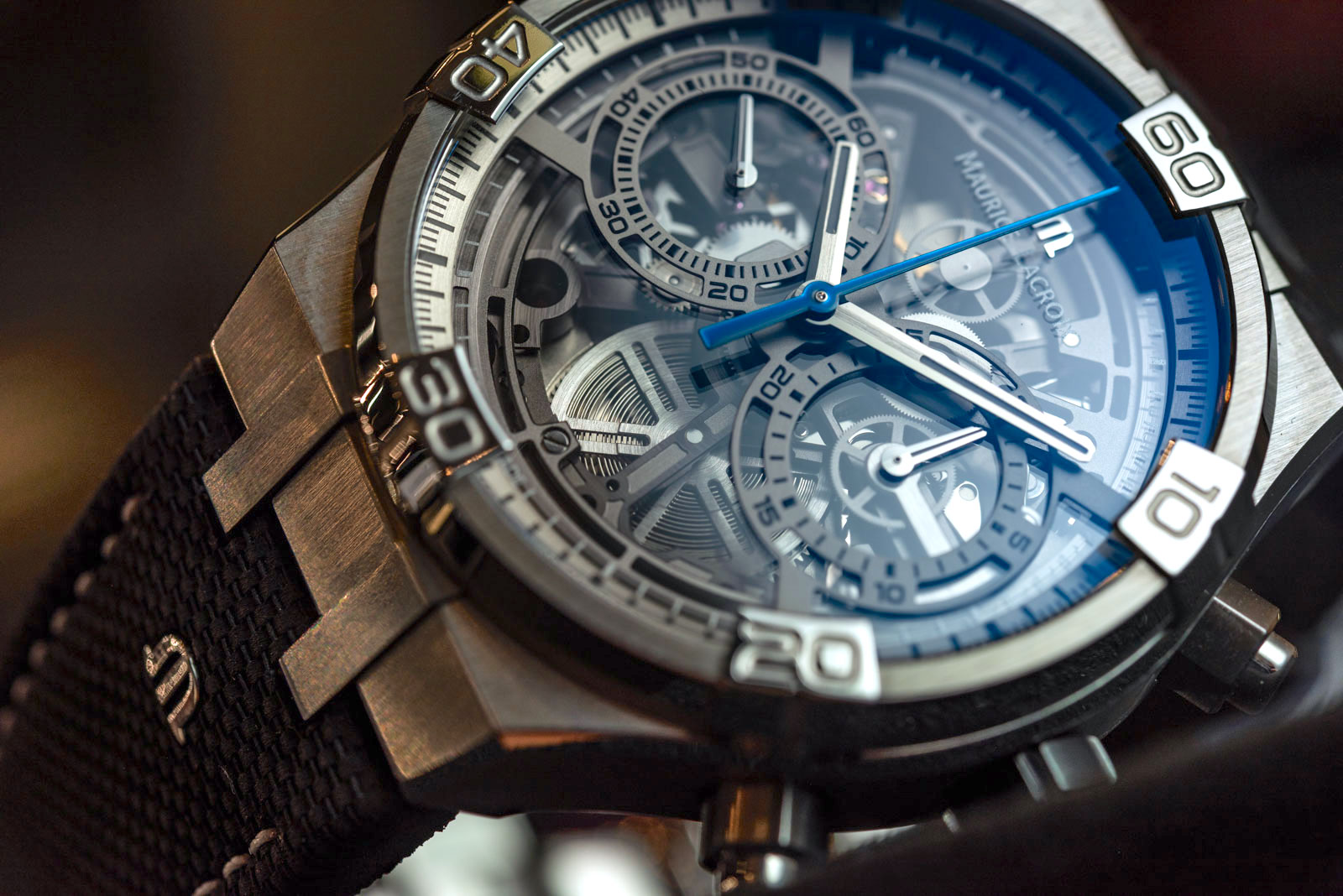 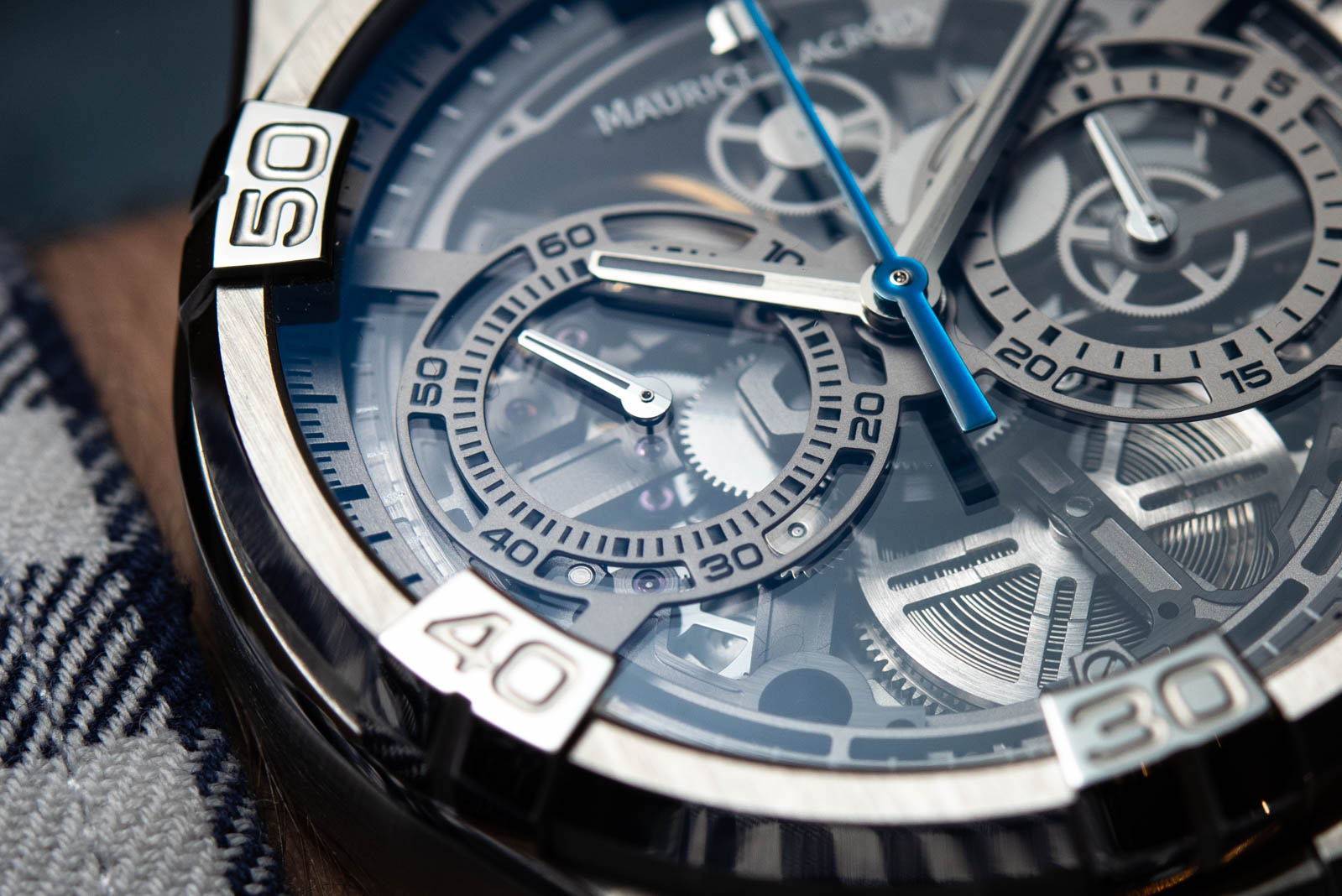 As a skeleton design, it’s more or less expected that the dial of the Maurice Lacroix Aikon Chronograph Skeleton plays with visual depth in some way. What’s not expected, however, is how well these layers of depth flow together. Skeleton dials can often be technically impressive but visually chaotic, with little semblance of order or legibility remaining from the base model. The Aikon Chronograph Skeleton sidesteps this problem courtesy of its two topmost layers — an applied chapter ring in bead-blasted steel that connects to chronograph subdial rings at 3 and 9 o’clock, and a trick sapphire main dial with printed seconds indices and an applied logo at 12 o’clock. This allows the indices and subdials to visually float above the skeletonized movement itself while creating a subtle visual barrier, orienting the components for easier reading on the fly. This sapphire dial is, at times, completely invisible, while at other times it reflects light back at the wearer — both are captured on our live images of this piece from the Inhorgenta Fair in Munich. 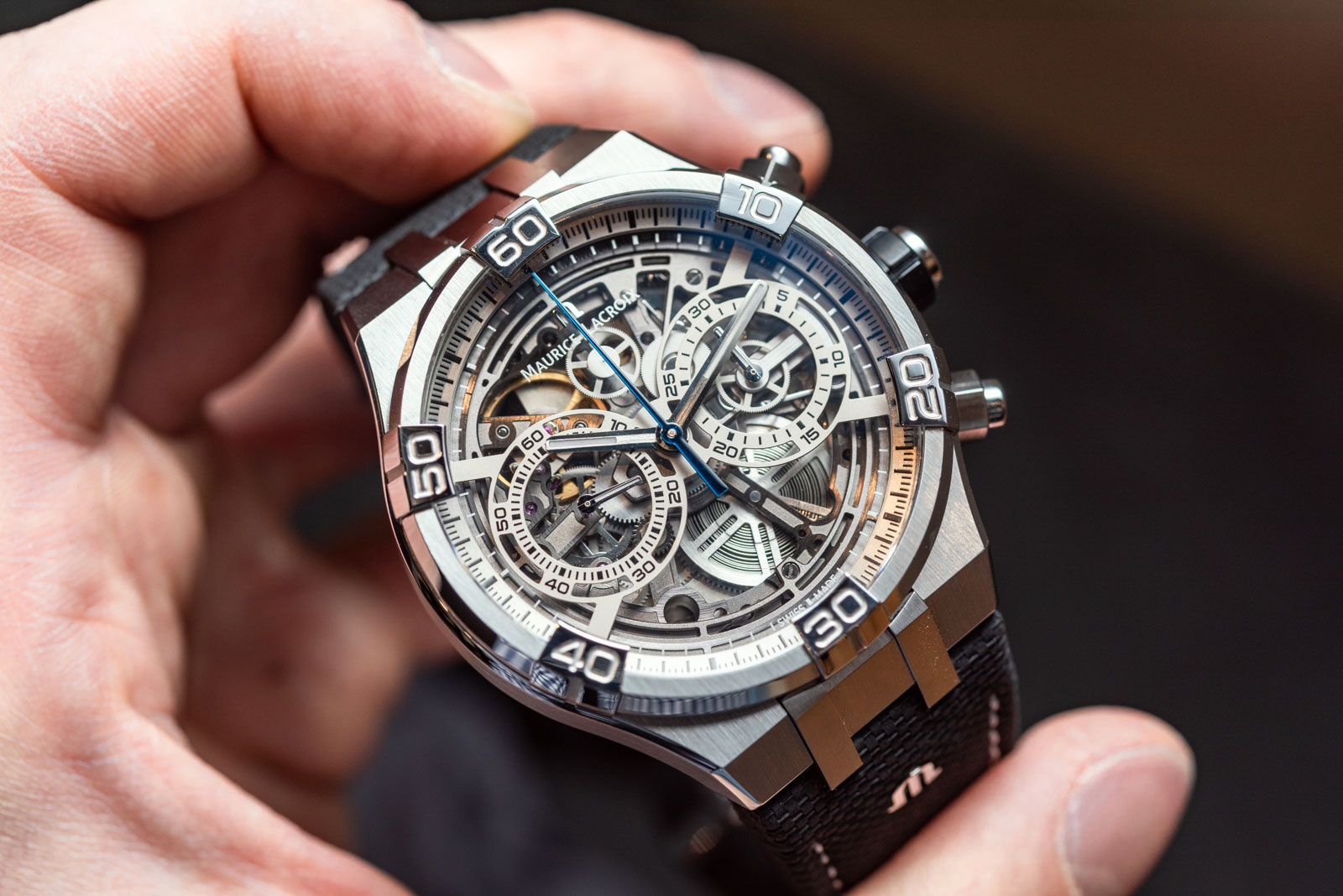 Below that sapphire layer, the skeletonized latticework of the movement receives a PVD treatment, which further aids legibility through contrast. Furthermore, making this framework dark emphasizes the depth in the design, while also allowing the visual highlights of the movement like the balance wheel and mainspring to stand out sharply. With so much else going on, Maurice Lacroix wisely opts to keep the handset simple and pared back to avoid clutter. However, the blued chronograph seconds hand adds a punch of color to an otherwise monochrome look while making reading the chronograph much simpler at a glance. 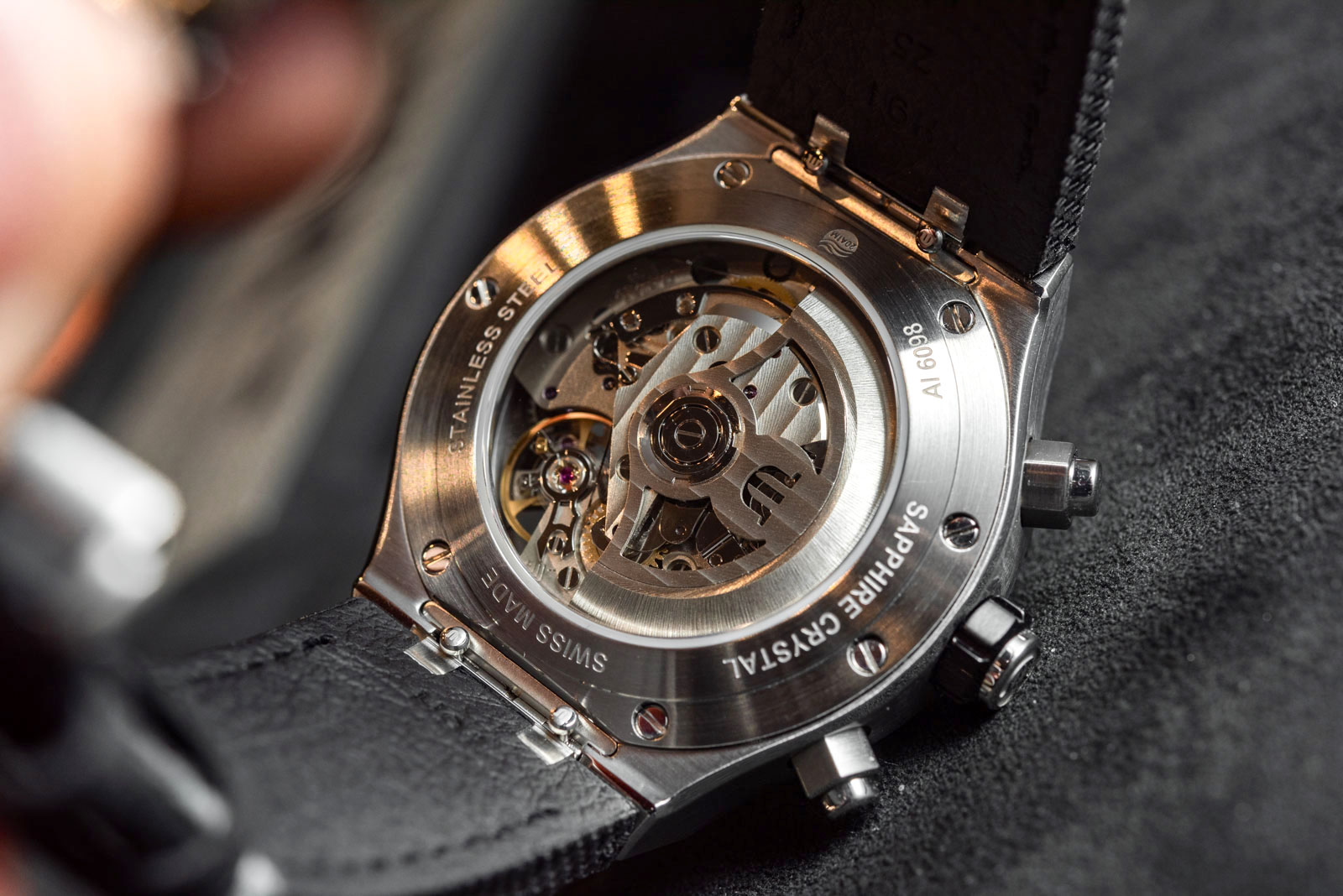 The movement powering the Aikon Chronograph Skeleton is Maurice Lacroix’s exclusive ML206 automatic chronograph powerplant. Designed in conjunction with Concepto and first appearing in the Masterpiece Chronograph Skeleton in 2016, the ML206 has its basic architecture show resemblance with the highly popular 7750, but one need not look twice to see just how far the ML206 is from your standard 7750. 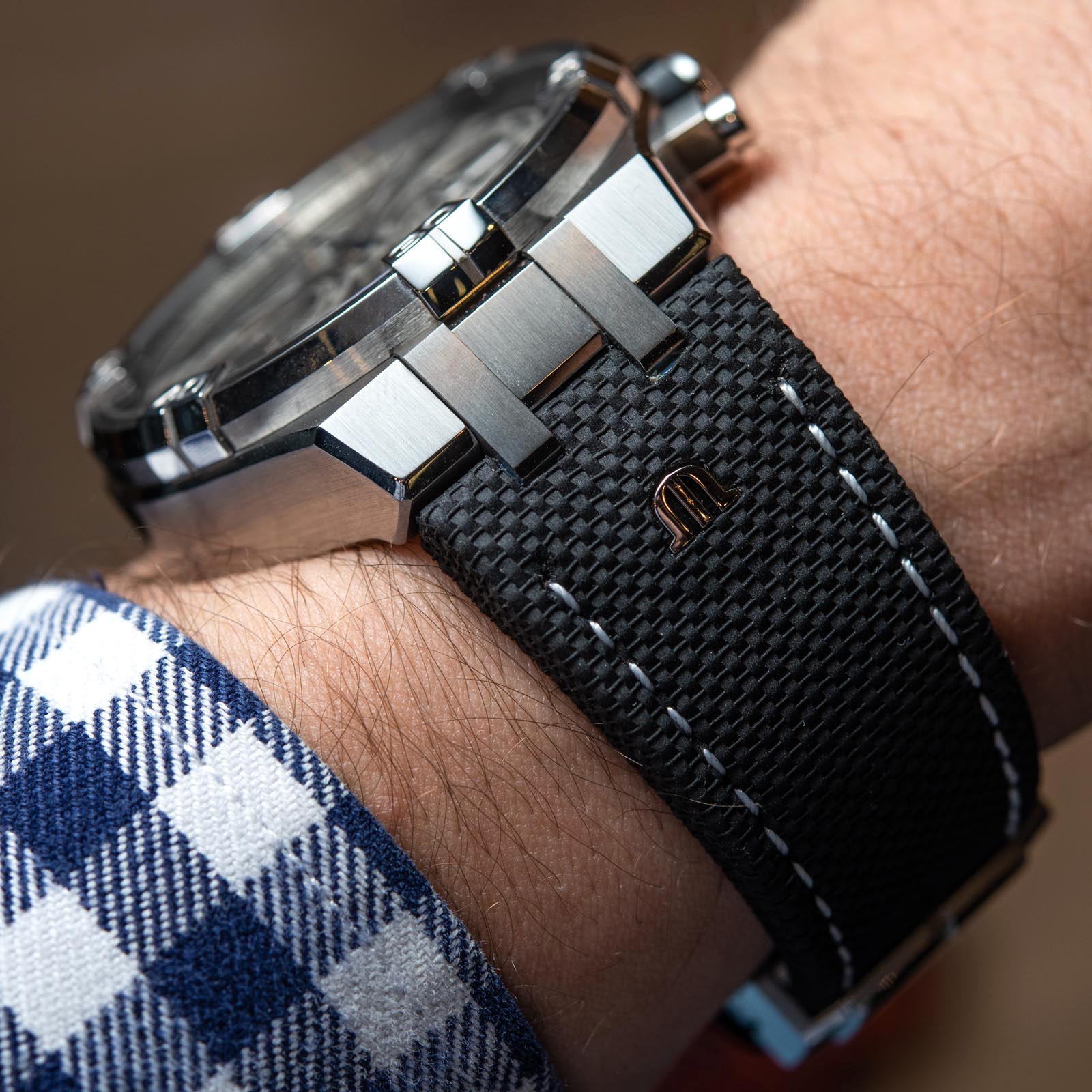 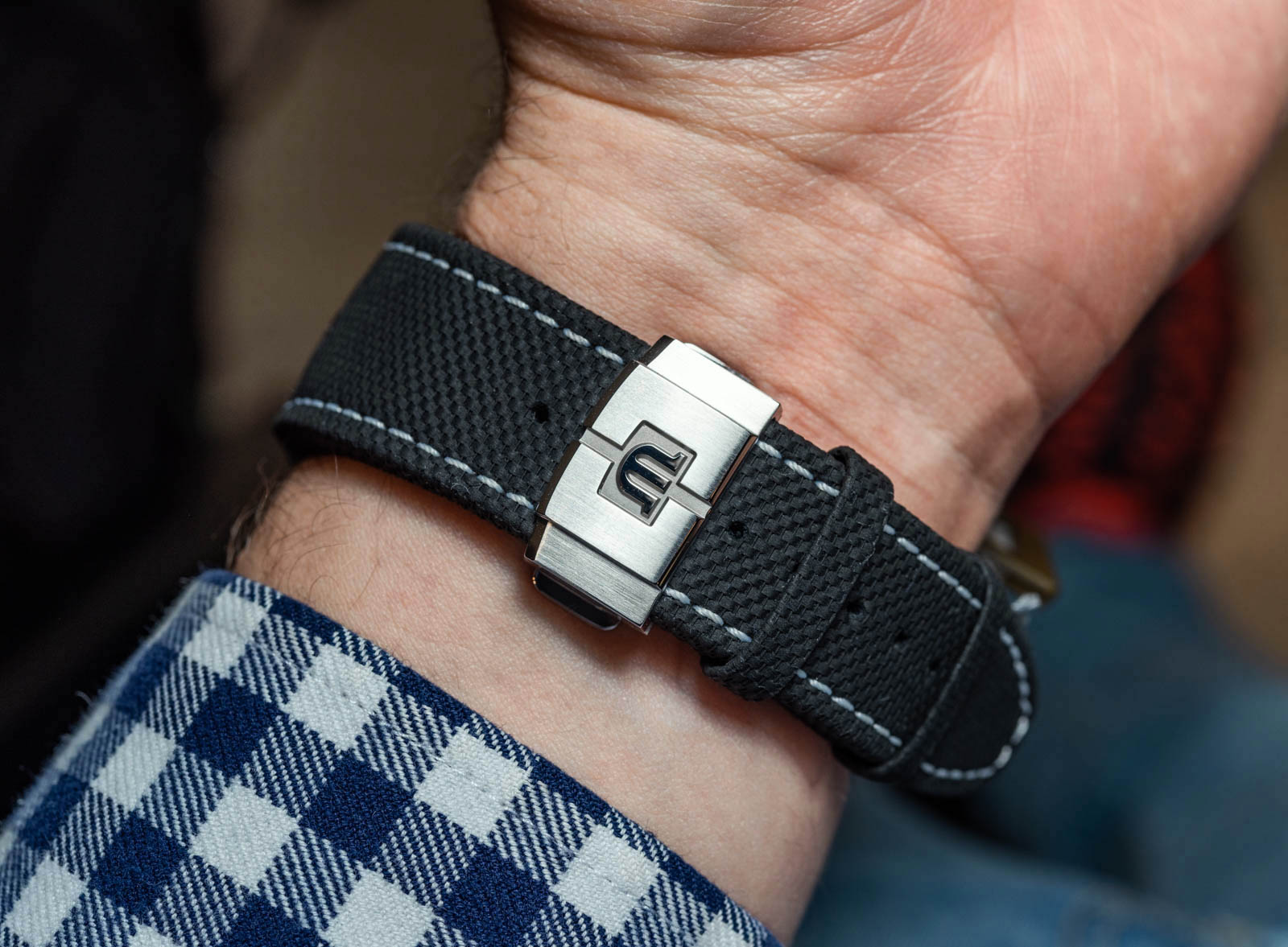 Maurice Lacroix mounts the Aikon Chronograph Skeleton on a calfskin-lined black fabric strap with white contrast stitching, along with the brand’s signature applied emblem. It’s a suitably sporty and modernist companion for the watch, and while it is uniquely shaped to conform to the Aikon’s integrated lug design, the strap also includes a quick-release feature for easy swapping. The quick release is a great concept in theory, but the fact that the Aikon line is an integrated design means that while changing straps might be easy, finding another strap or bracelet to fit is nigh on impossible. 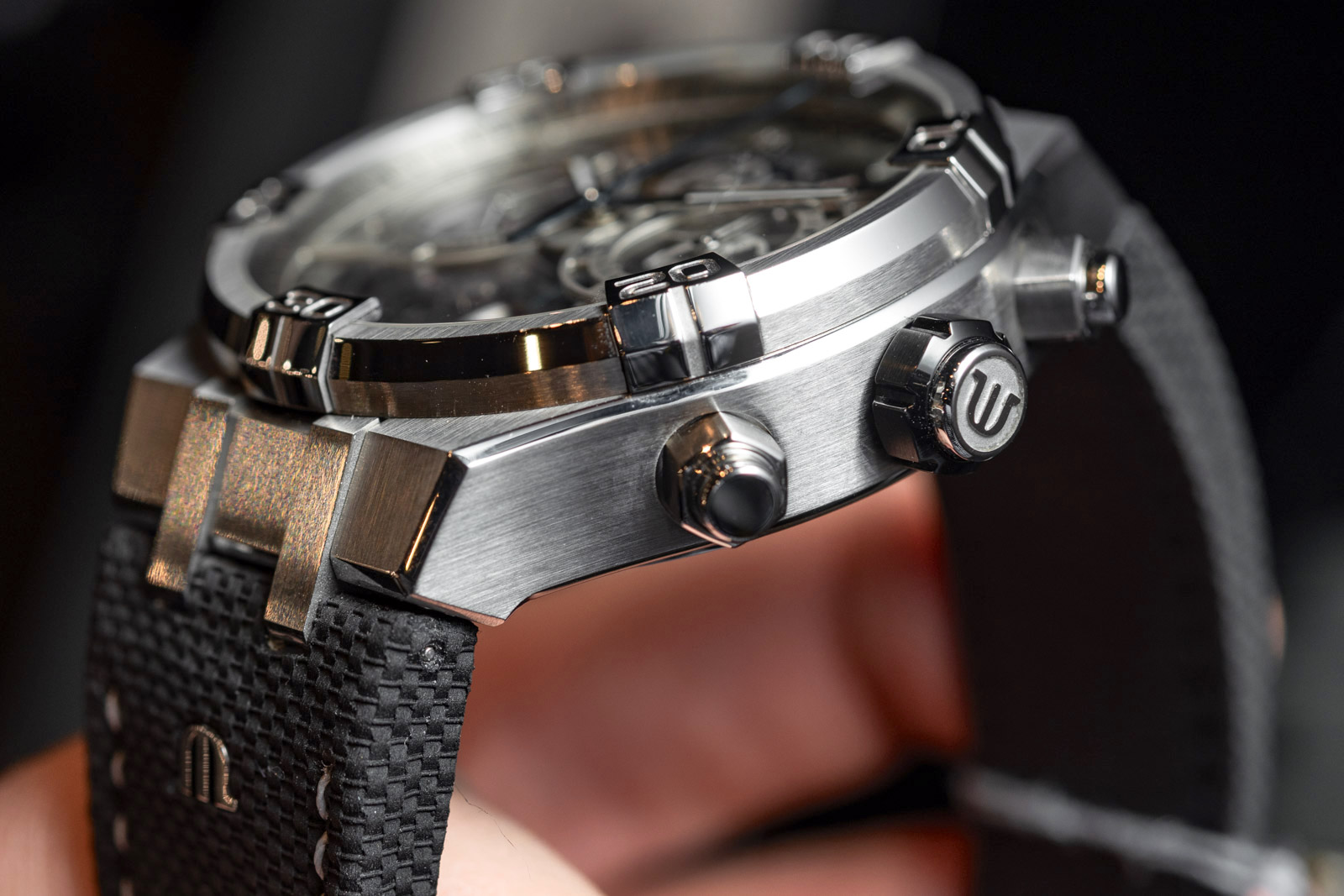 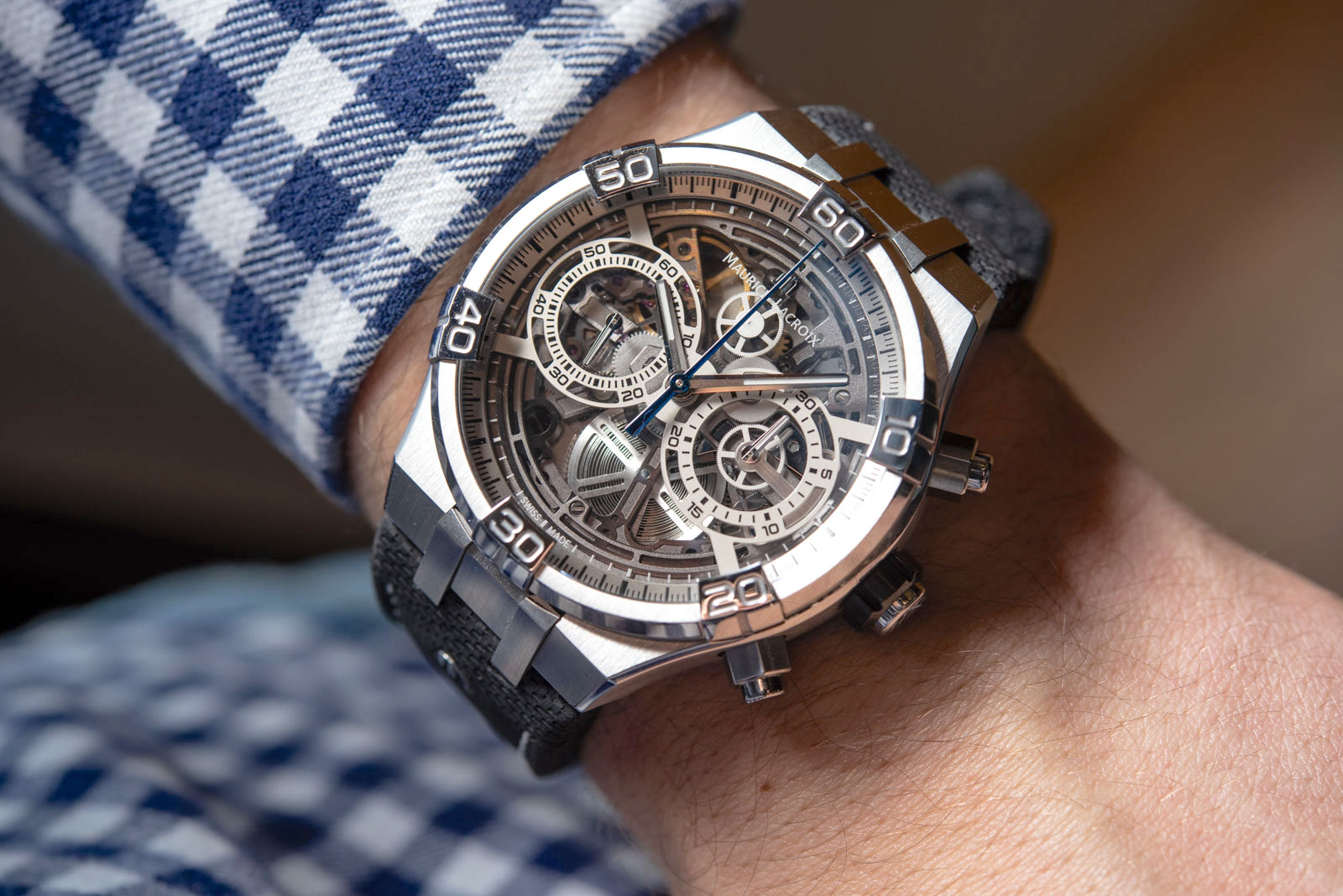 Taken as a whole, the Maurice Lacroix Aikon Chronograph Skeleton advances what’s great about the Aikon line (sharp and intricate finishing, luxe design, and quality that punches well above its price point) and amplifies it, all while creating a new and visually distinct identity for the line that diversifies it away from some of the heavy hitters it’s been often accused of aping. Like the rest of the Aikon line, there’s solid value for money here as well, at an MSRP of $7,028 for an integrated bracelet, skeletonized sports chronograph with an in-house movement. For more information, please visit Maurice Lacroix’s website. 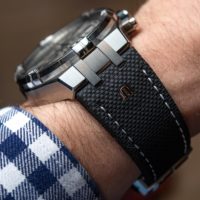 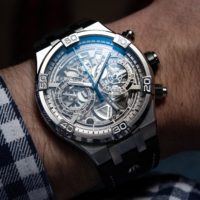 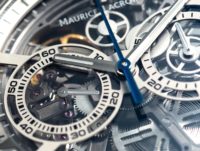 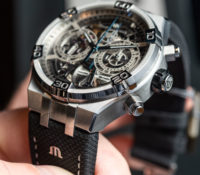