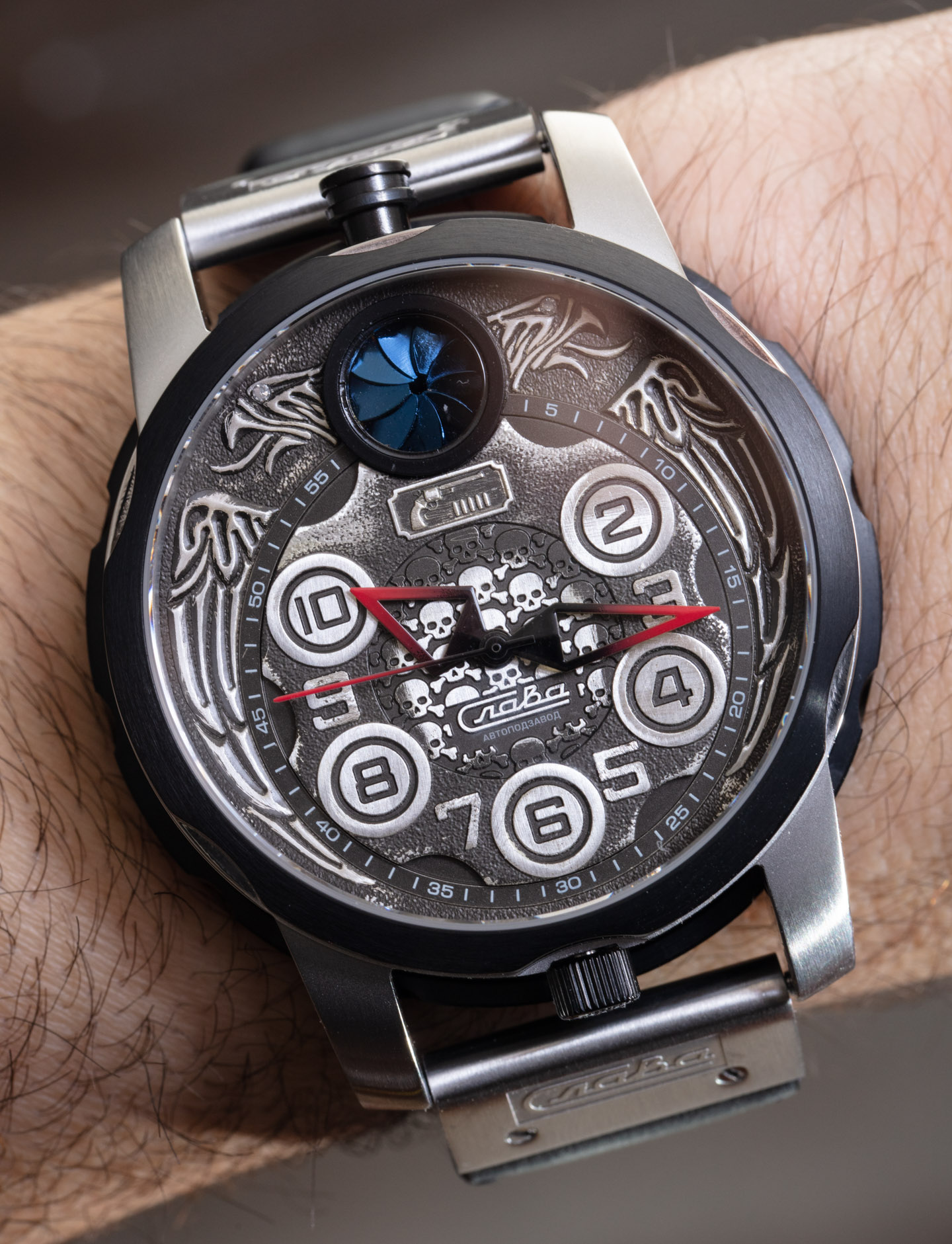 I absolutely adore how incredibly weird this watch is. Produced and designed in Russia by the traditional Moscow-based brand Slava, this is one version of the limited-edition Slava Russian Roulette (AKA “RUssian RUlette”). The elegance of the product is that even though its design and story are unique, the concept is very straightforward. This is what I like about all good Russian ideas; they do not circumlocute the issue. Wearing this watch, you can play a safe version of Russian Roulette, a strange and deadly gambling game.

The “Russian Roulette complication” execution is very good. The watch has two mechanical features that, together, allow you to play the game. First and most important is a caseback that spins (not connected to the caseback, which allows you to spin it while wearing it). This middle ring in the case is connected to magnets, which solidly hold the ring in place when it is not spinning on its own momentum. This action is very pleasing, and it would be an honest statement to suggest that a major value of the watch is in its ability to be a wearable fidget spinner. 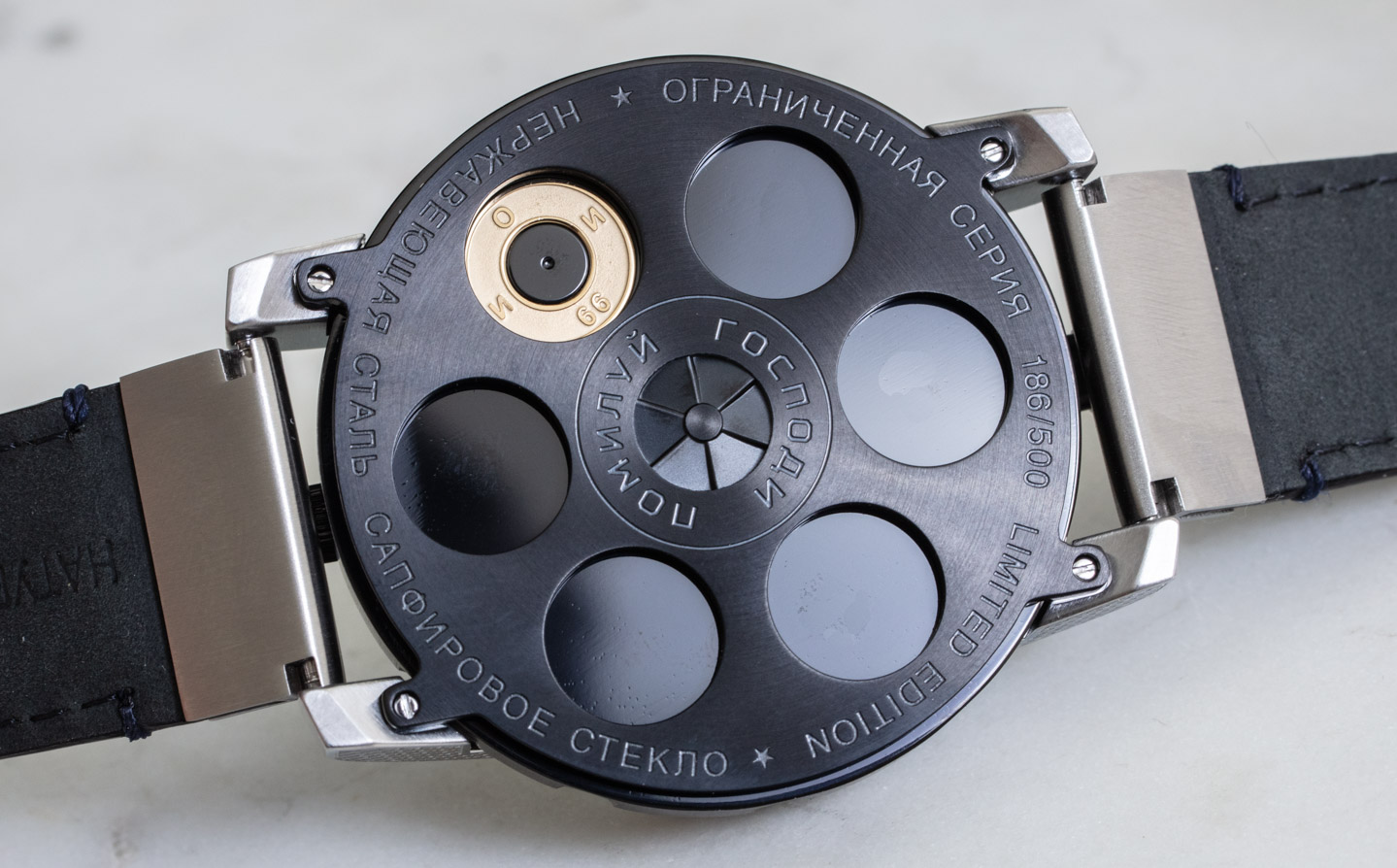 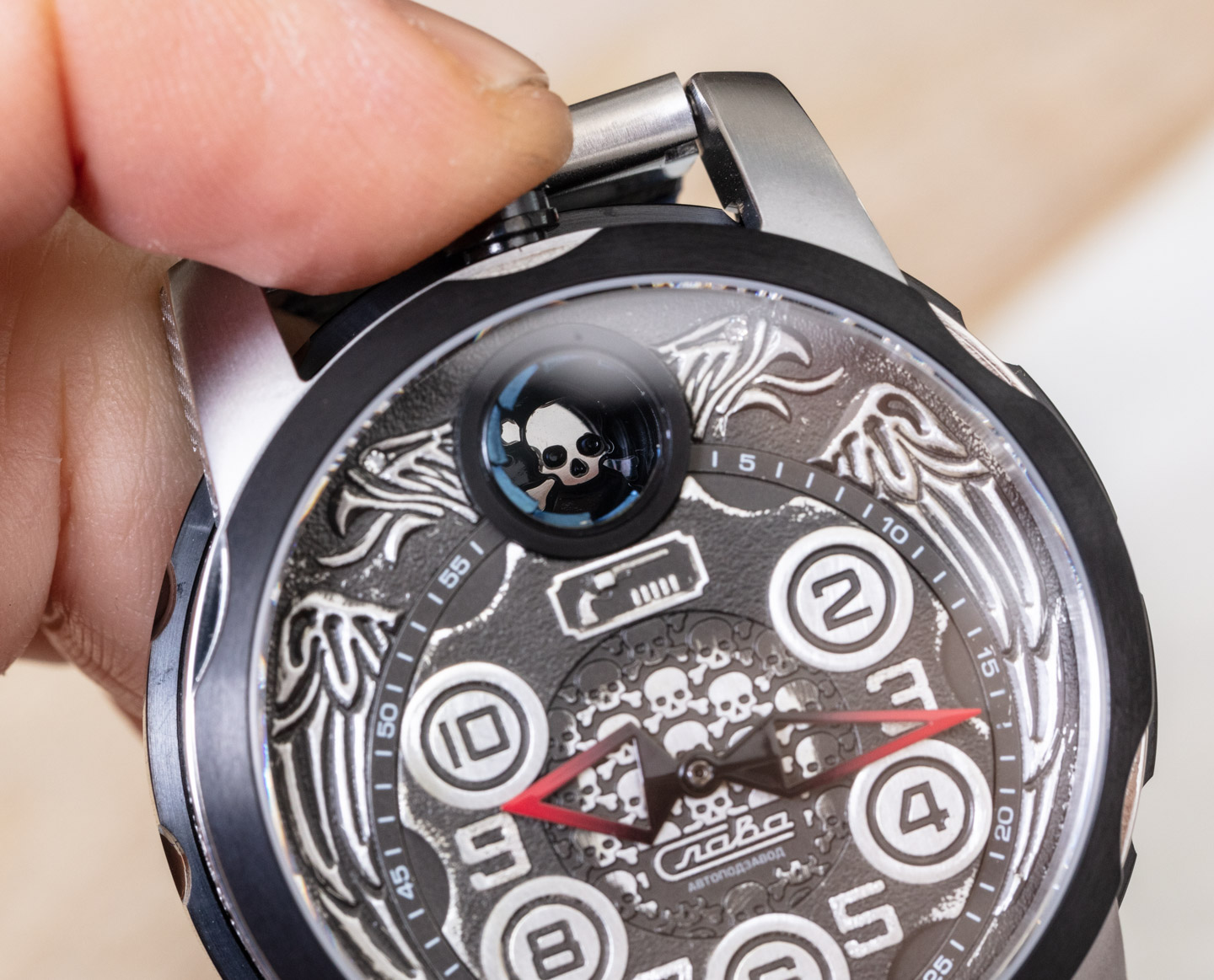 If you take the watch off your wrist and view the caseback, you can see the position of the single “bullet” in the six-round “chamber” visible through the sapphire crystal caseback. The bullet back has the initials and birth year of a Russian entertainer who inspired the idea for the watch with Slava. (More on him a bit later.) On the dial of the watch is a window at 12 o’clock with blued metal diaphragm shutters. A pusher on the top of the watch case covers the diaphragm and reveals either a blank space (you are safe), or a skull and crossbones motif (you are dead, the bullet is behind the window). By spinning the barrel in the middle of the case, then viewing inside of the dial window, one can play Russian Roulette (safely).

Slava debuted the Russian Roulette watch in four aesthetic versions. Really, the only differences are the dial and case colors. This mostly polished steel reference 1900201/300-NH05 Russian Roulette model is actually the most conservative of the bunch. The case is water-resistant to 100 meters and is 47mm-wide. It is about 17mm-thick and has a lug-to-lug distance of about 50mm. Given its size and bulk, the Russian Roulette watch is remarkably wearable, though it does have a very specific design that will appeal to some, and be predictably odd to others. 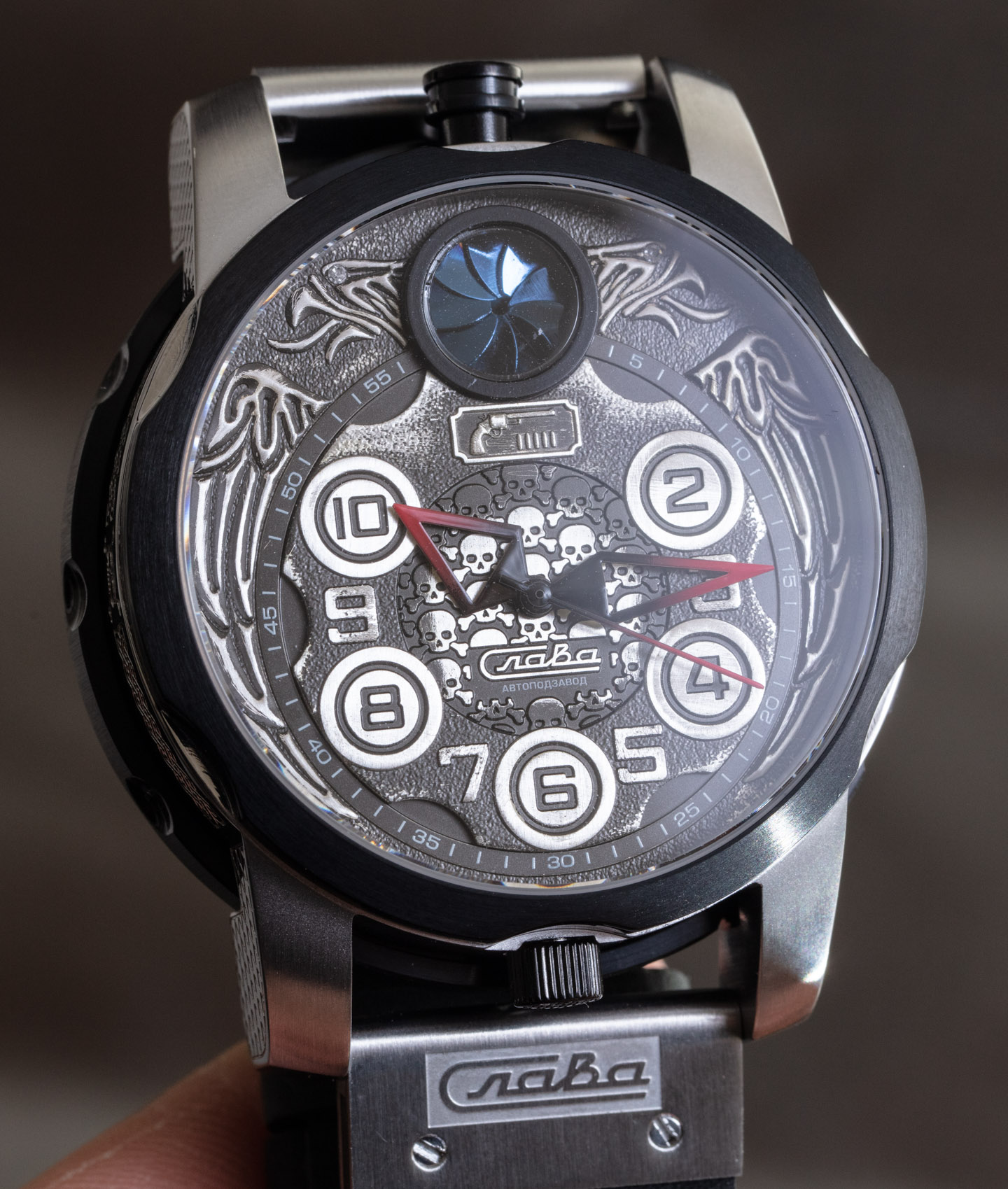 Given the unique mechanism, this is among Slava’s more expensive collector’s-theme watches, but most Slava watches are lower-priced. The elaborate case design includes laser-etched decor on the sides and lugs of the case, as well as a rich relief dial which, in one fell swoop, celebrates guns, Russian Roulette, American biker culture, and catacombs. Who better to devise such a design than a popular Russian actor, writer, and priest!

They call it a “killer novelty.” The Russian Roulette watch was debuted as a collaboration between Slava and Mr. Ivan Ivanovich Okhlobystin. He isn’t very well-known in the West, but he has been in over a dozen movies since the early 1990s and has also written a few films. In the 1990s, he apparently “withdrew to a monastery” and became a Russian Orthodox priest. In around 2010, he voluntarily gave up his religious career and returned to entertainment. The Russian Roulette watch is apparently the timepiece wearable for him. Perhaps for those who know his work or personality well, this connection makes sense. Not knowing Ivanovich’s work, I’m able to completely interdependently admire the fun little toy that Slava was able to come up with. 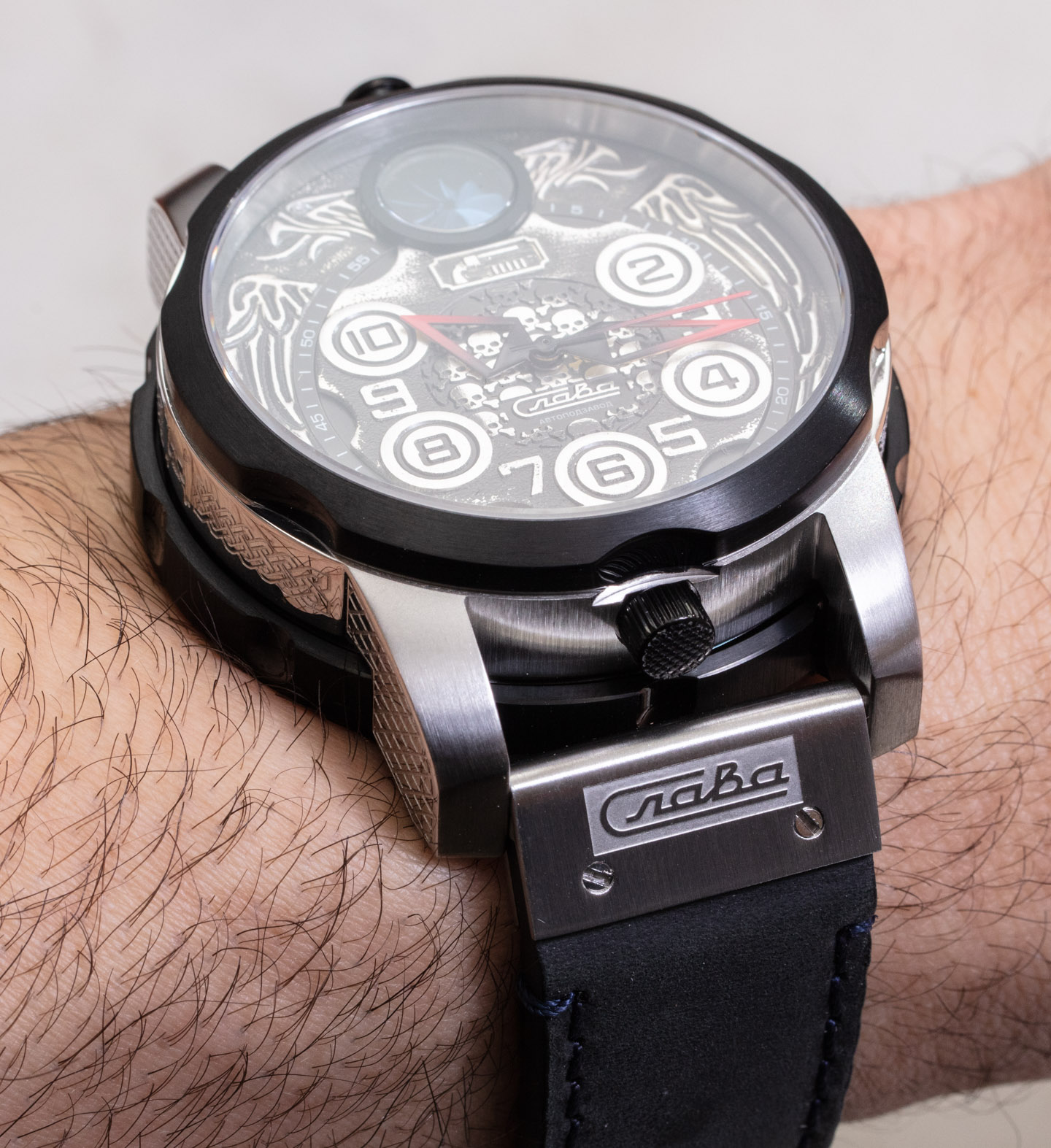 Inside the watch is Japanese movement — even though some other Slava watches contain Russian-made mechanical movements — a Seiko Instruments caliber NH05 automatic movement. It operates at 3Hz and has about 30 hours of power reserve. This is an intentionally small movement because it needs to take up a relatively limited space inside the case given the features related to the Russian Roulette elements.

Attached to the watch is a leather strap, which has metal cap end-links that add to the macho style of the watch. I do have one gripe with the strap, and that is the fact that putting the excess strap in the first loop on the opposite strap is too challenging given the loops are both a bit too tight and also secured in place. Machismo is really what this timepiece is all about, and it is also a concept notable for its popularity among men in Russia (the most famous ones also included). Slava made a very macho watch that is also a byproduct of Russian culture. It celebrates a historic Russian watchmaker, and it also plays to the sense of humor and interests of at least one particular facet of Russian culture. In that regard, the Slava Russian Roulette is a very clear and unadulterated execution of a theme — in other words, good wearable mechanical art. 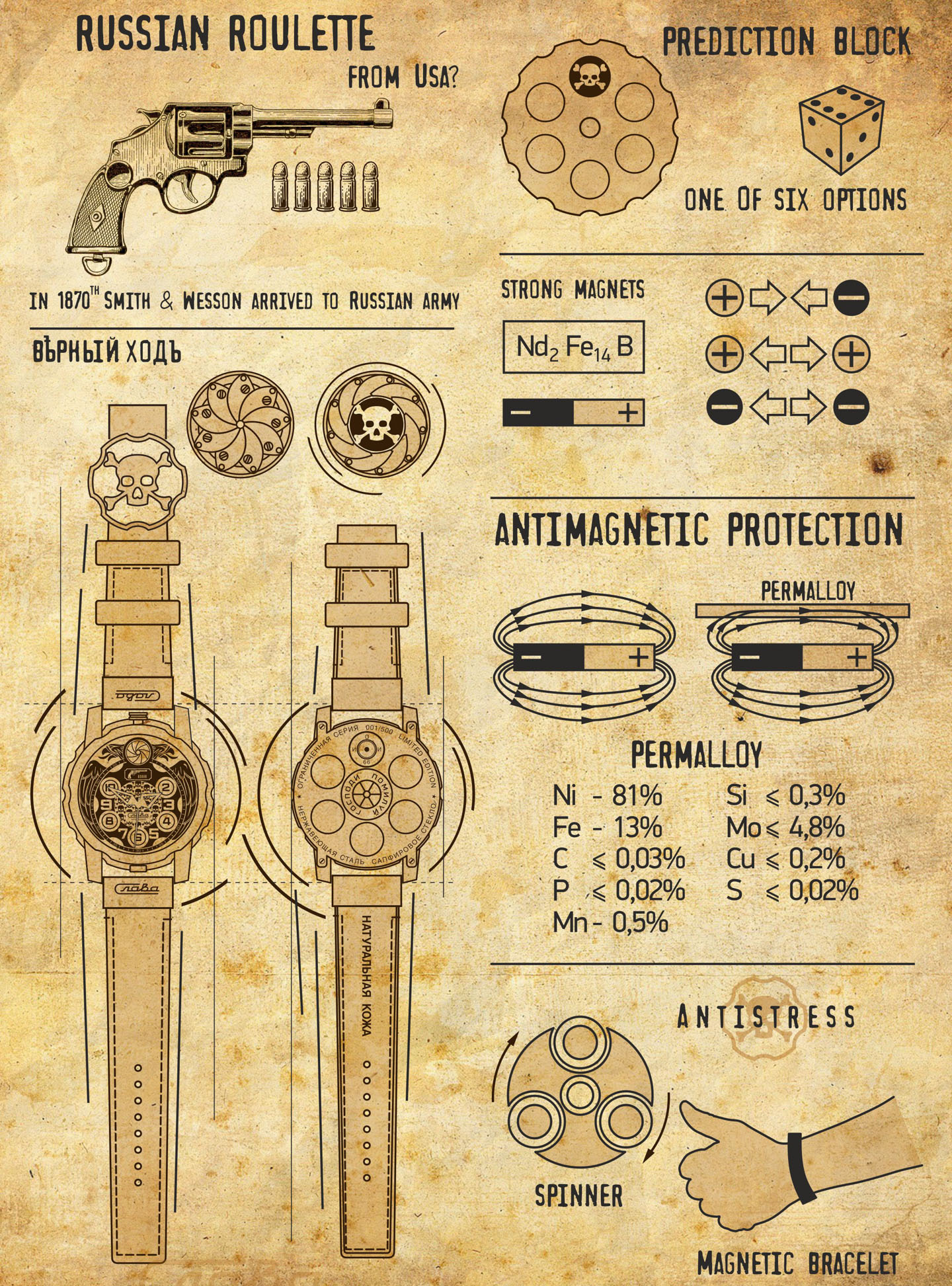 Slava may have done it in a more focused manner, but it isn’t the first to create a Russian Roulette-themed watch. That honor goes to Mr. Yvan Arpa, who explored the theme of Russian Roulette and bullets in his various Artya Son Of A Gun collection (aBlogtoWatch hands-on here) watches. Admittedly, Artya sold most of the Son Of A Gun watches to Russian customers. 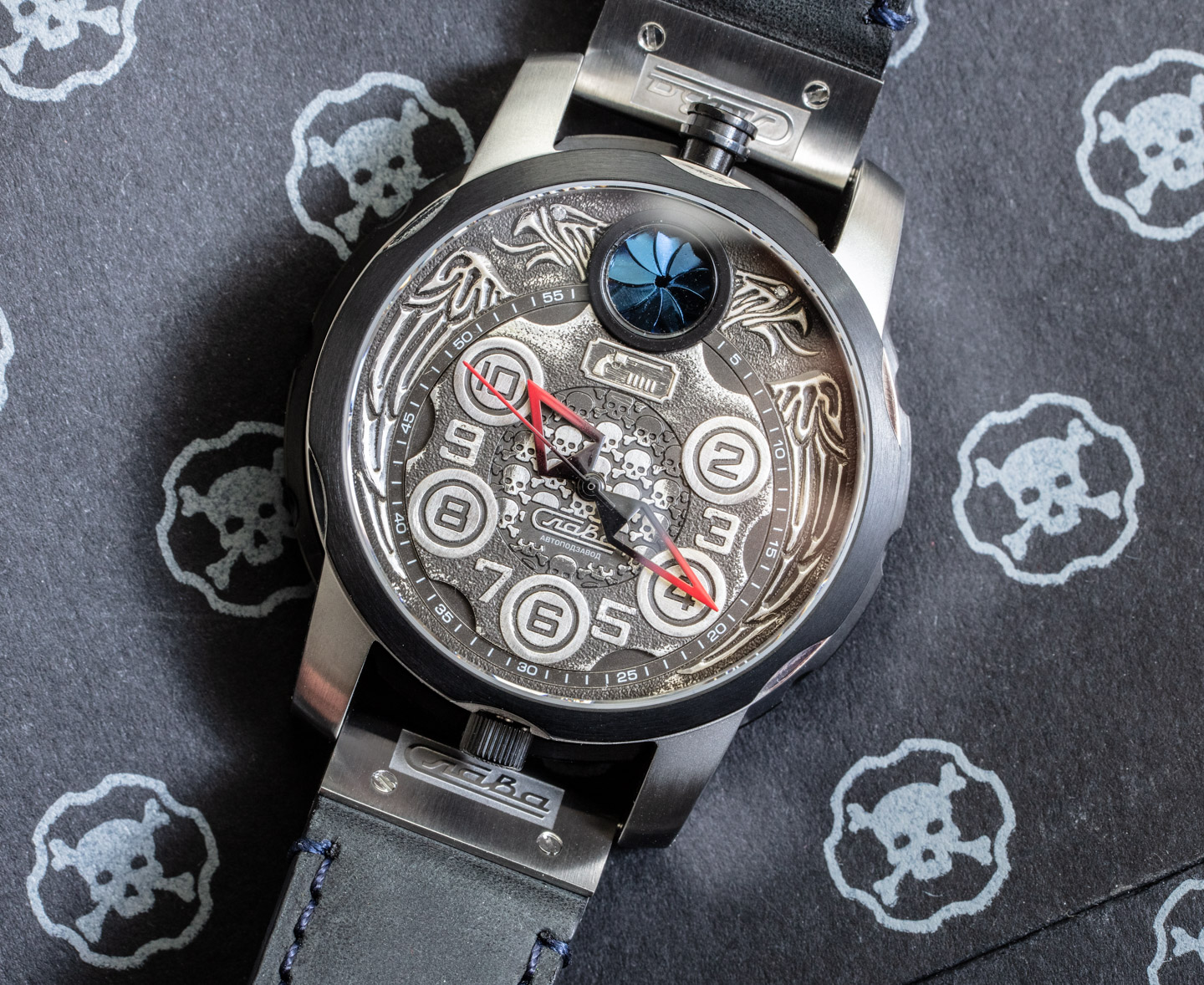 The appetite for this grizzly gun game appears to be alive and well. For what it’s worth, the watch is well-done, the game mechanism feels refined, and the overall outcome is that Slava has just entered a strong contender for appeal in the actually rather large “skull-themed” watches category. And unlike most skull watches, this one comes with a built-in tension-releasing toy. Price for the limited edition (of 500 pieces per case) Slava Russian Roulette is 17,376.74 Russian Rubles (or about $2,655 USD). Learn more or order at the Slava watches website here.