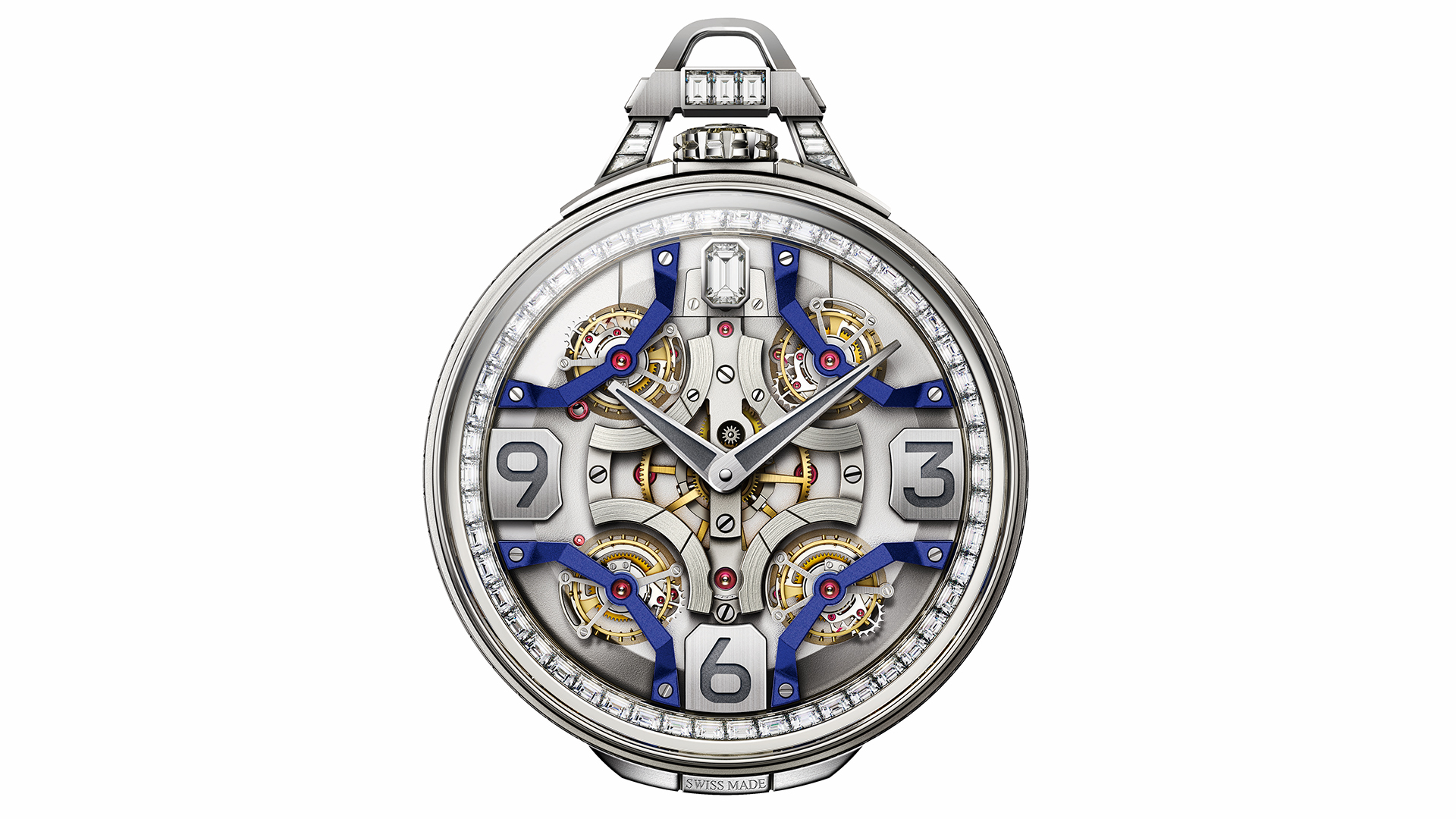 While better known for its work as a high end jeweler, Harry Winston is also capable of producing truly world-class haute horlogerie pieces at times that reflect its iconic jewelry aesthetic along with its dual legacy as a jeweler and watchmaker. The brand’s latest one-off creation combines the most striking elements of both sides, blending the brand’s signature emerald-cut and baguette-cut diamonds with four independent tourbillons. The aptly named one-of-a-kind Harry Winston Ultimate Quadri Tourbillon pocket watch is a dramatic piece of engineering spectacle, acting as a showcase for some of the brand’s finest finishing and artisanship. 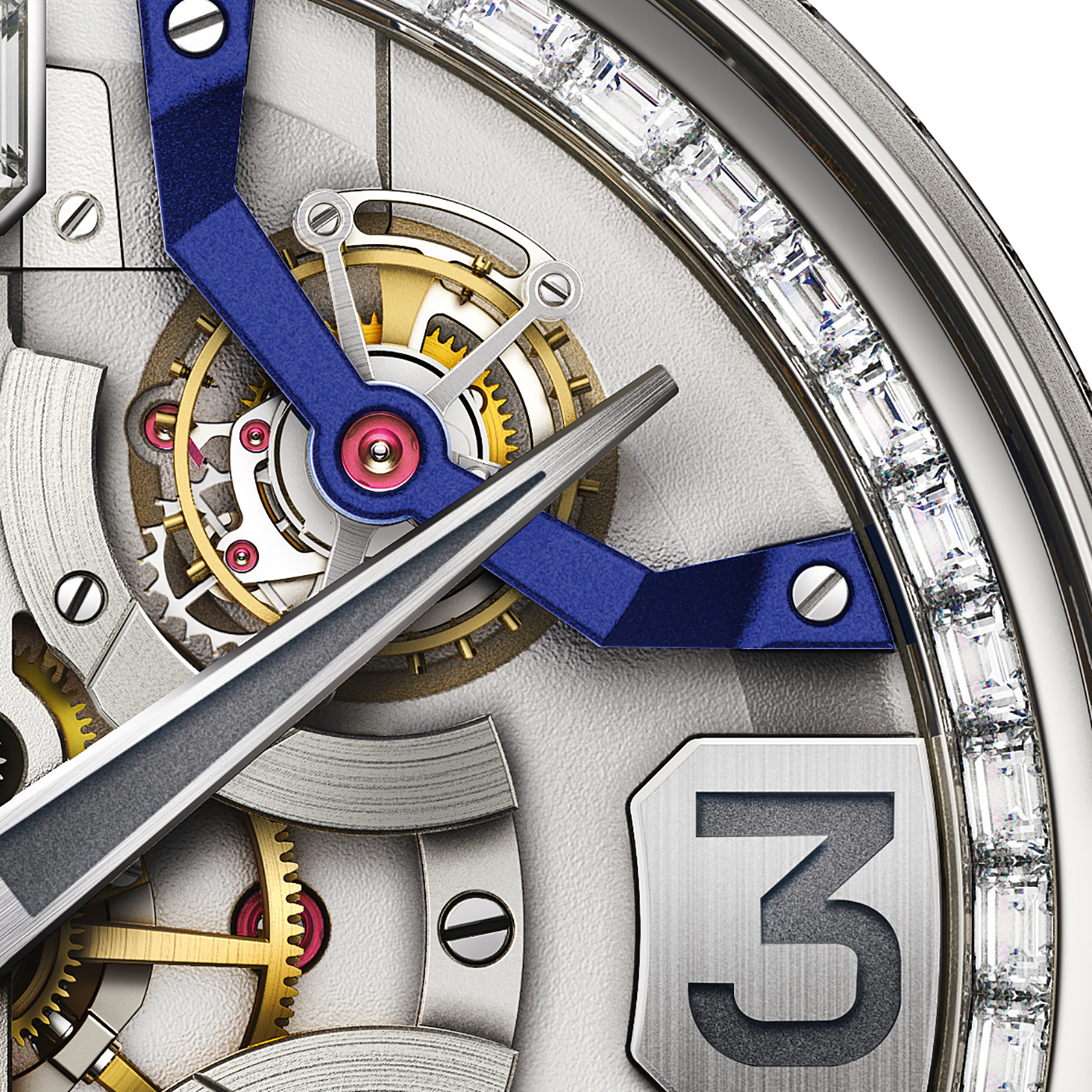 The 57.2mm, 18k white-gold case of the Harry Winston Ultimate Quadri Tourbillon is a simple take on the classic pocket watch form, made unique with Harry Winston’s signature Art Deco touches. At 6 o’clock, a raised trapezoidal ridge adds a touch of visual weight to the otherwise slim and minimal design while counterbalancing the 12 o’clock crown. The crown and its guard are angular and technical in design, with aggressive knurling and a segmented, angular motif that echoes the 6 o’clock ridge. To fully display the quad tourbillon movement within, Harry Winston finishes the case with a sapphire display back. Of course, the real standout element of the case design is the gem setting, with the bezel, case edge, caseback, and crown guard adding a total of 254 baguette-cut diamonds to the already luxurious look. 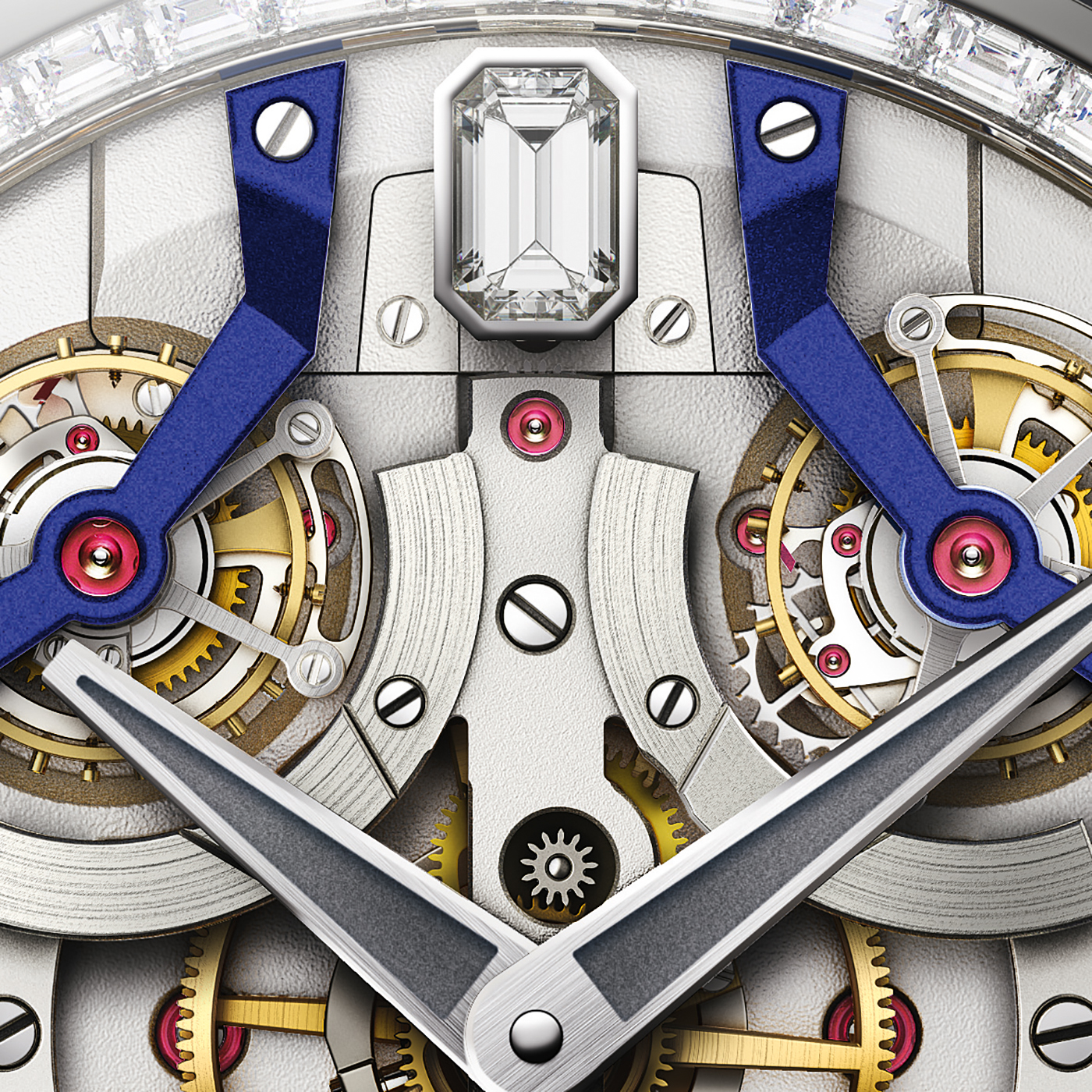 As the name might suggest, the focal point of the Harry Winston Ultimate Quadri Tourbillon is its quartet of independent tourbillon escapements, and the skeleton dial uses each to maximum effect. With a complete skeleton design, the “dial” itself is really a set of cleverly designed platinum bridges with oversized engraved Arabic numerals at 3 o’clock, 6 o’clock, and 9 o’clock. The majority of the visual real estate is given over to the four independent tourbillons and their blued titanium bridges at each of the four corners. The stylized bridges flanking each of these tourbillons form a rounded cross in negative space at the center of the dial, offering a dramatic glimpse of the main gear train. At 12 o’clock, the design is capped off with Harry Winston’s signature emerald-cut diamond, punctuating the mechanical complexity with the simple visual drama of the gem. 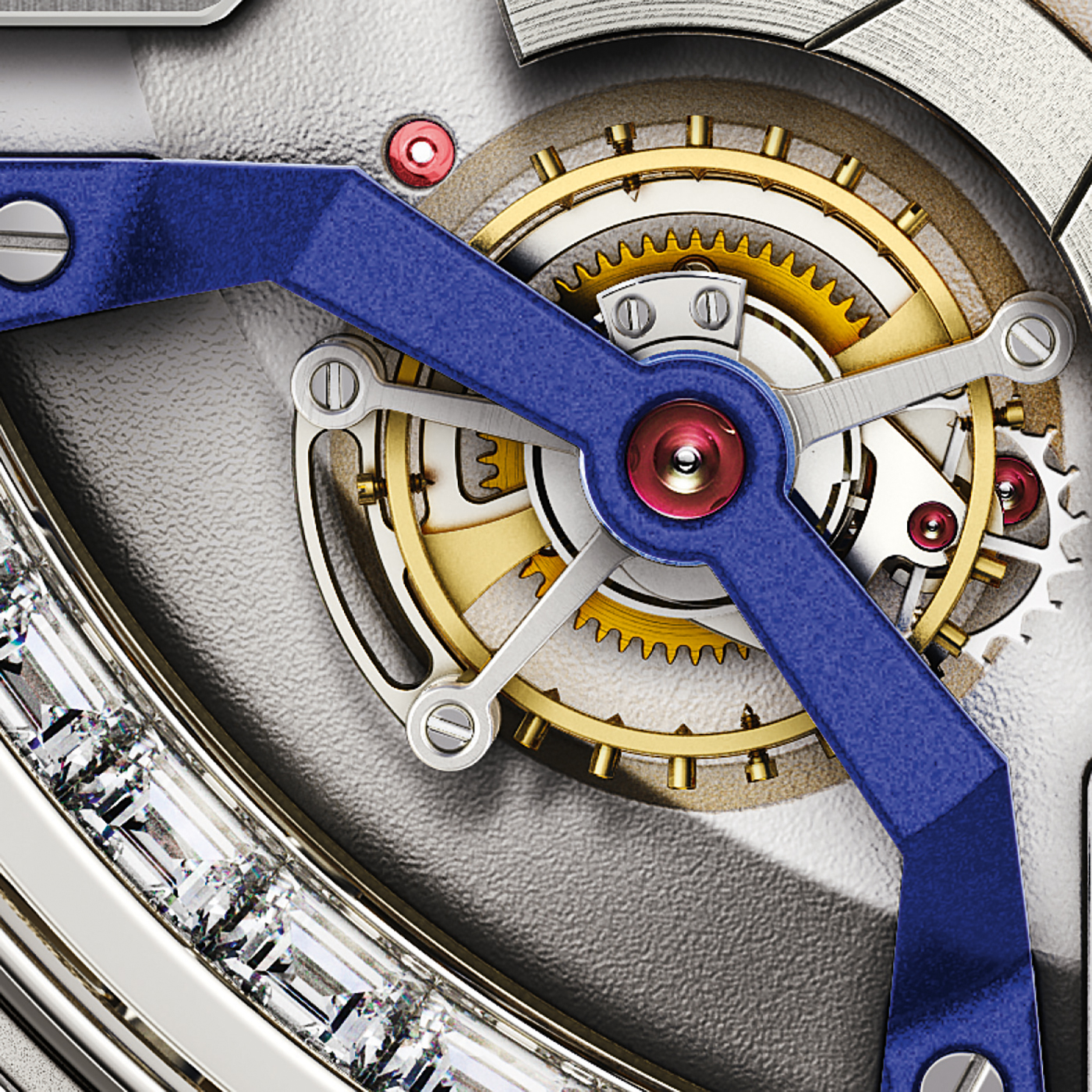 The in-house hand-wound H4703 tourbillon movement inside the Harry Winston Ultimate Quadri Tourbillon is adapted from the brand’s Histoire de Tourbillon 10, first released in 2019 but heavily modified to fit the circular pocket watch case. Beyond the sheer spectacle of four independent tourbillons running at once, the H4703’s tourbillons add two extra layers of complexity, spinning counterclockwise and making a complete revolution in only 36 seconds. The finishing on the rest of the movement is remarkably restrained for such a complex piece, with brushing and microbead blasting dominating the majority of the platinum bridges’ surface area. Each edge, however, is chamfered and hand-polished for a touch of flash. Power comes courtesy of four fast-winding mainspring barrels organized into two pairs and positioned horizontally, rotating once every 3.2 hours. Performance for this ultra-complex 662 piece movement is robust, with a 55-hour power reserve at a 21,600 bph beat rate. 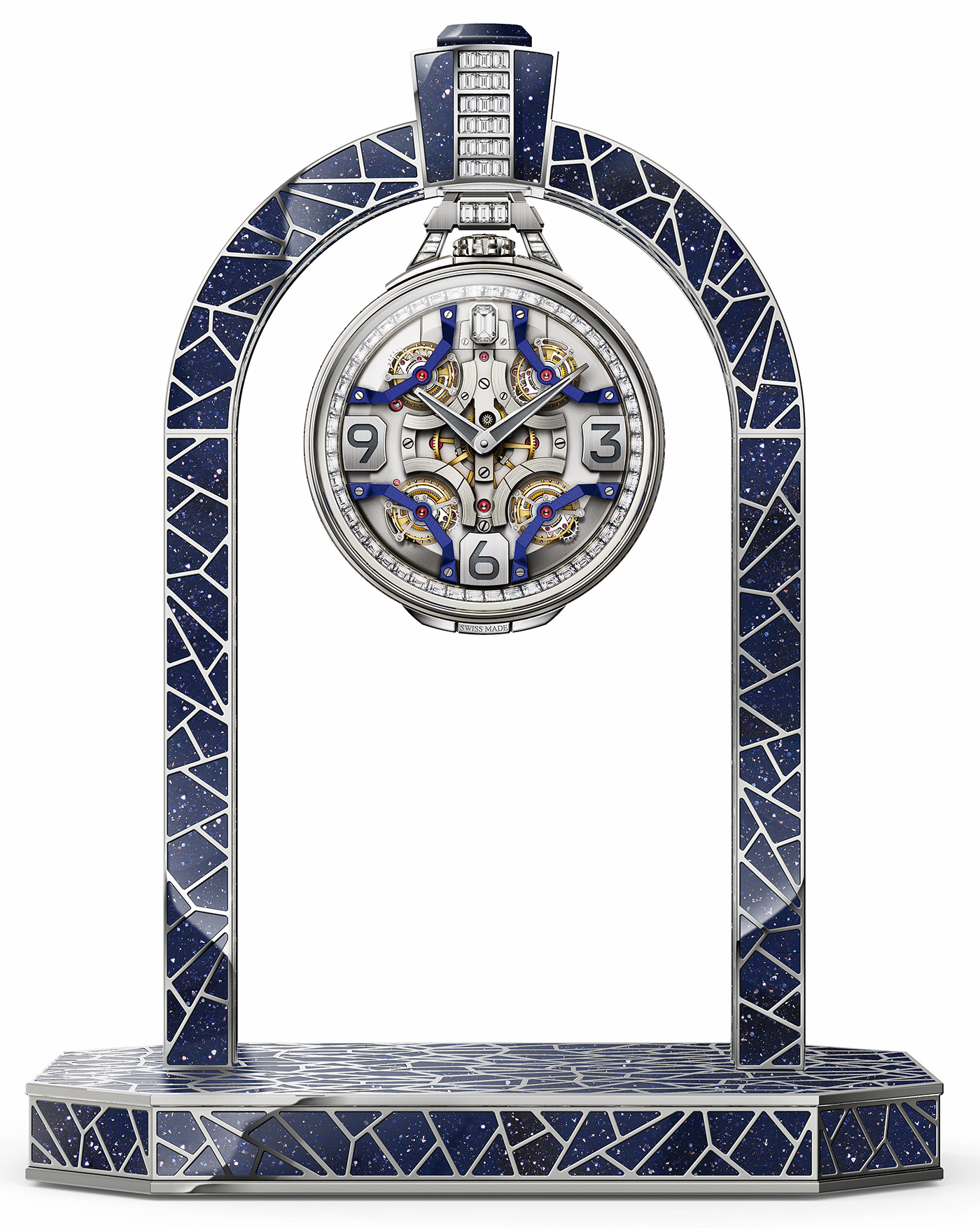 In addition to a simple 18k white-gold chain for actual wear, the Harry Winston Ultimate Quadri Tourbillon comes mounted in an ornate 18K white gold holder inspired by the iconic arched doorway to the Harry Winston flagship salon on Fifth Avenue in New York. Decorated with a mosaic of midnight-blue aventurine and topped with a keystone of 18 baguette-cut diamonds, this display holder is as much a piece of the Ultimate Quadri Tourbillon’s spectacle as the watch itself.