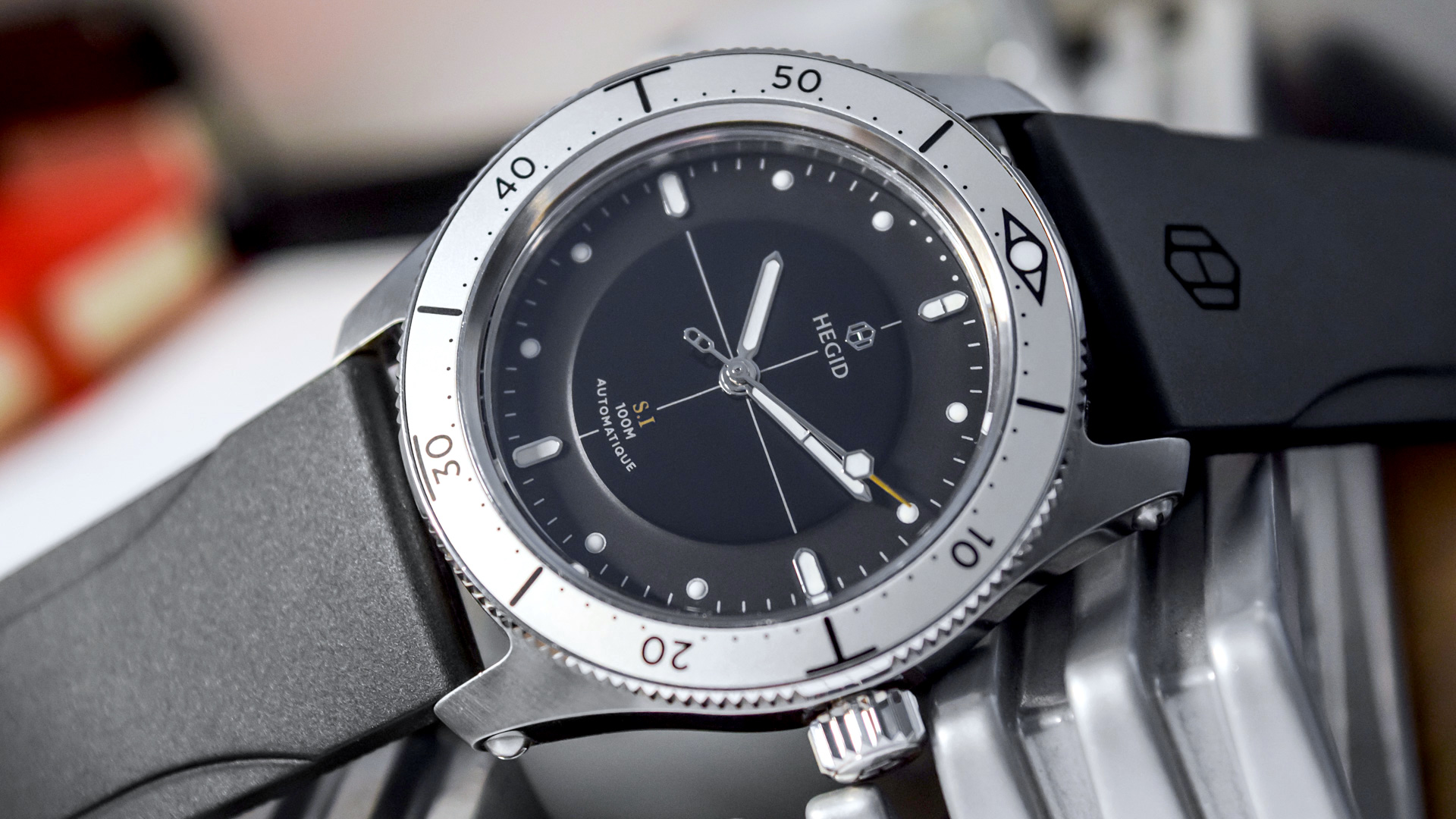 Customization is sweeping through the luxury industry, with major players like Hermès offering in-house bespoke services throughout their range of leather accessories but, unfortunately, not their watches. A few microbrands in the watch space, like our friends at Undone, do offer custom-assembled watches, but once the options are selected and the watch is delivered, you’re stuck with what you’ve picked. Seeking to fill what they saw as a developing niche, a few Frenchmen — Emeric Delalandre, Henrik Gaché, and Gregory Gaucheé — had an idea for a customizable luxury watch system built around a water-resistant modular movement and dial concept with cases and straps that can be switched in seconds without any tools.

In 2018, after what I will assume were two difficult and expensive years of research, design, and prototyping, Hegid Watches was born. The brand’s initial offering is not a single watch as much as a set of possible watches built around its modular design. I had the opportunity to spend an extended period with Hegid’s complete system and will detail my experiences for our customization-thirsty audience. 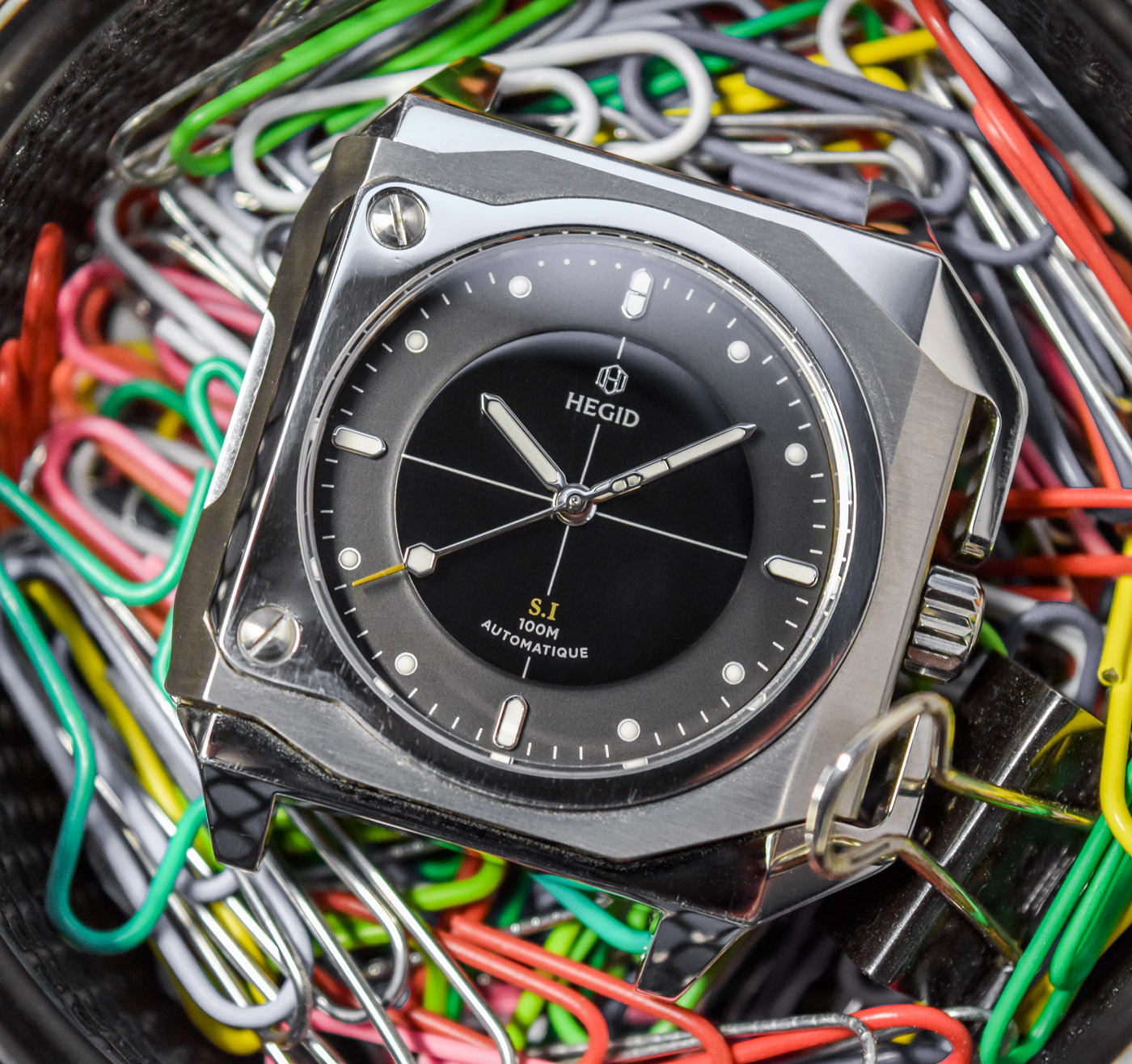 Typically, in a review like this, I’d write about the dial, the case, the type and quality of the movement, the feel of the strap or bracelet, and the experience of living with and wearing the watch. However, with Hegid, while I will cover all of these aspects, I have to approach the concept a bit differently. A watch system like this has never been attempted to this degree and with this level of refinement. So, we’ll start with the dial and movement in the inner module, then check out the various cases, and finally speak to the straps and concept as a whole. 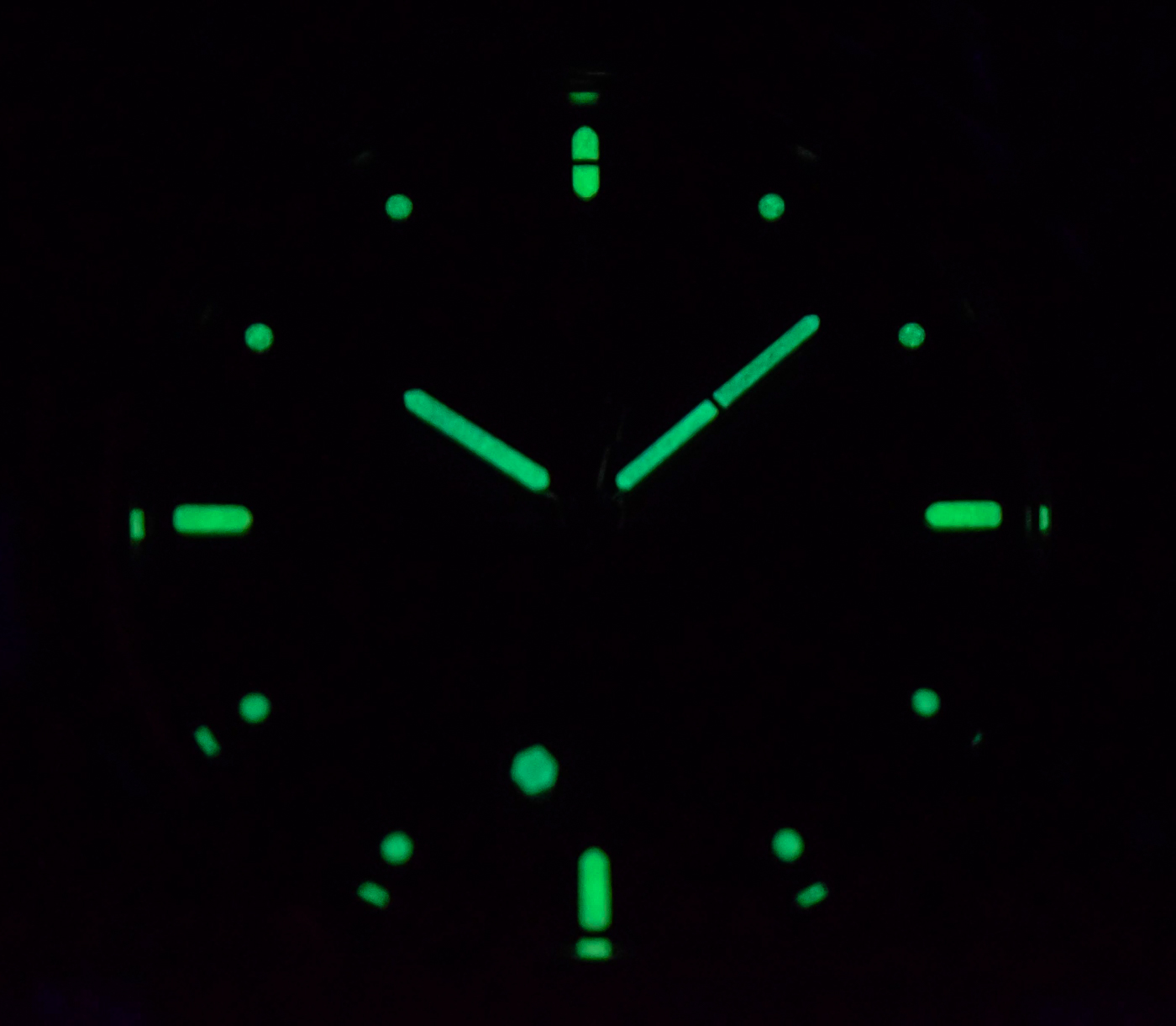 As a disclaimer, others have tried to build similar concepts. A small, coincidentally also French, maker named Japy had a somewhat similar concept decades ago, and another brand called Egard offers a similar customizable setup (though admittedly not as refined) at a much lower price point. H2o also comes to mind for customization, but no one has brought the luxury feel and product experience to bear in a custom setup as prominently as Hegid, whose capsule (which includes the movement and dial in a water-resistant inner case) retails for a not-insignificant $2,700 U.S. dollars depending on exchange rates, a fact we will need to address in detail. Here goes. 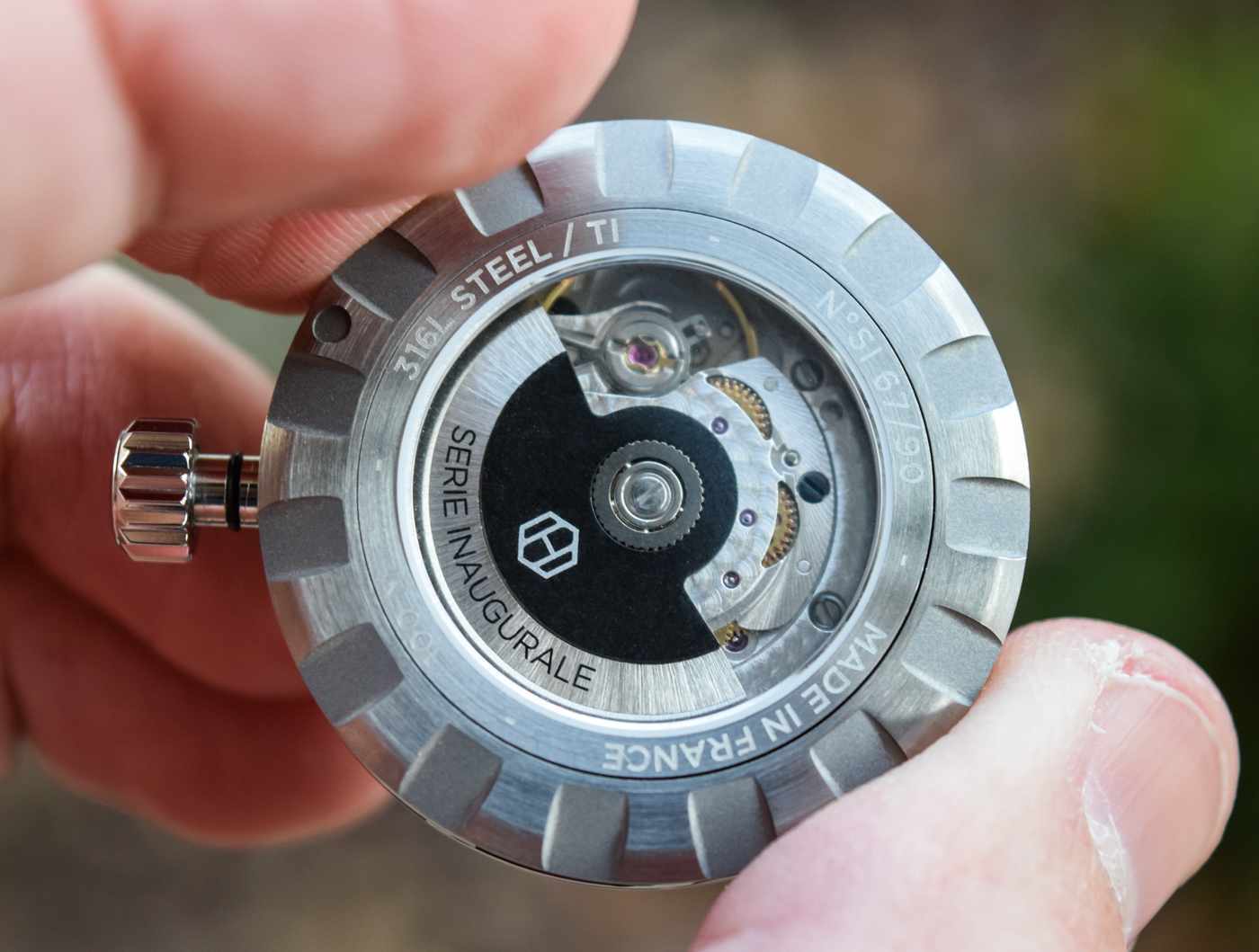 Hegid’s Inaugural Series (S.I.) Capsule consists of a 100-meter water resistant module that houses the dial as well as the caliber, both behind a set of anti-reflective sapphire crystals, as well as a screw-down crown on a relatively long stem to make room for the interchangeable cases, or carrures à Français. The capsule’s caseback features Hegid’s proprietary and easily grasped “Capslock” rotating ring, Hegid’s patented special sauce, executed in titanium. 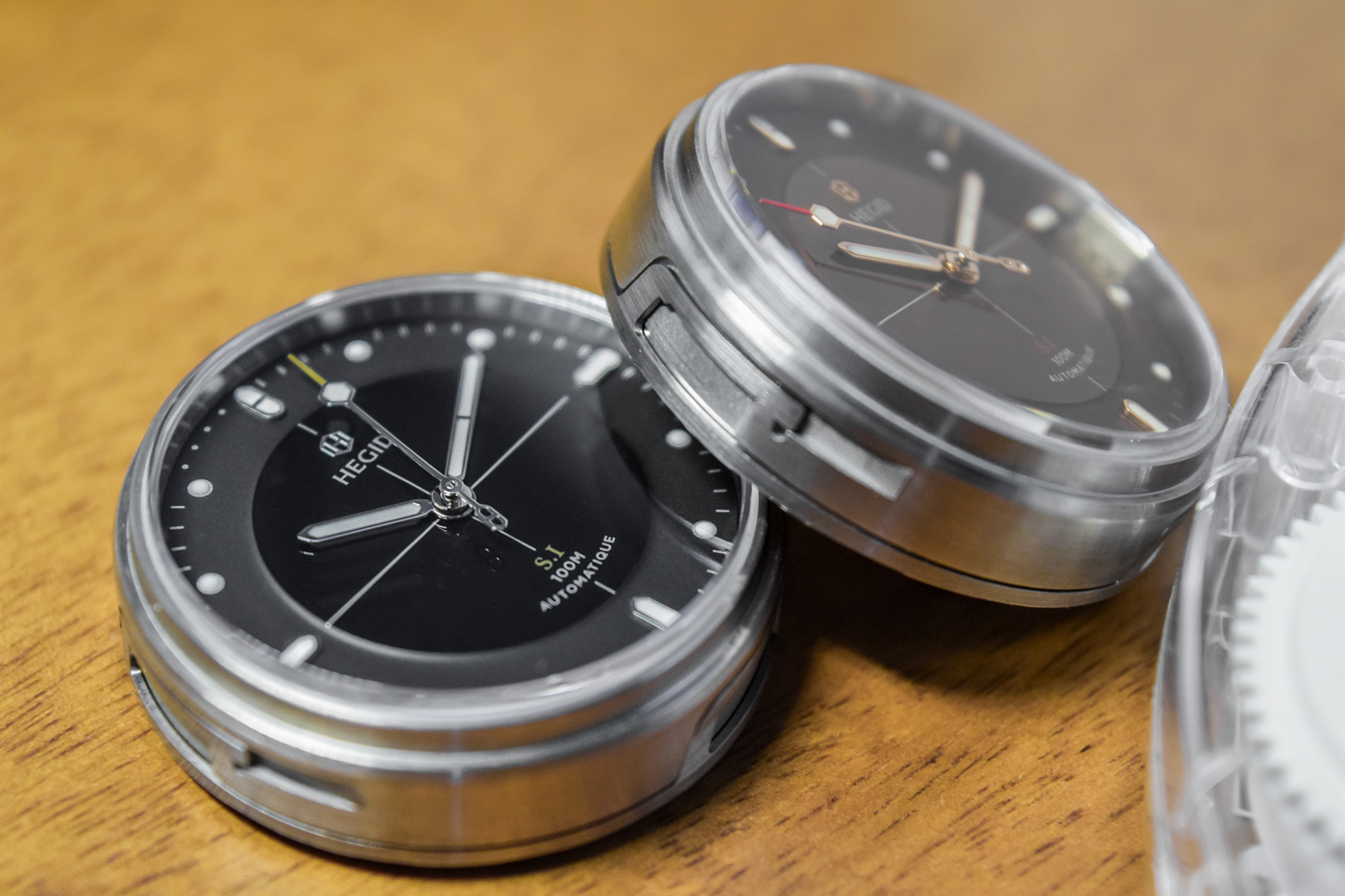 Hegid’s first and only dial (available in two colors, glossy embossed black or brown, each with subtle matching accents of color) features a crosshair motif over a sector layout, with hand-applied Super-LumiNova on the hour markers, and somewhat short baton-style hands. The clean look is further aided by relatively minimal dial text to include the water resistance, “S.I.,” and “Automatique” at 6 o’clock to balance the applied Hegid signature at 12 o’clock. Hegid’s S.I. dial is effective, legible, and refined without trying too hard. 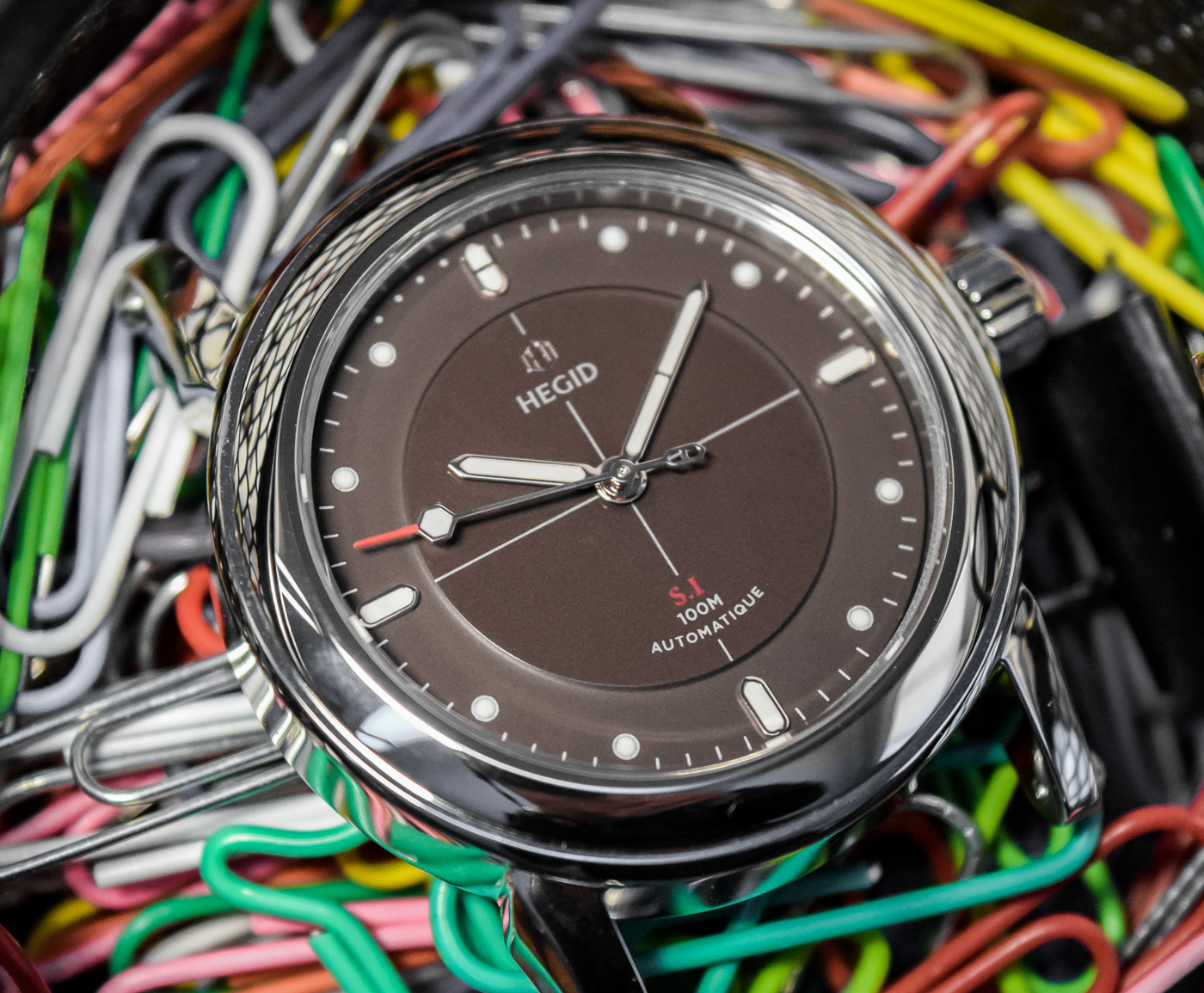 The level of artisanship and attention to detail in the dial is impressive, clearly demonstrating an emphasis on the luxury customer for whom the watch is intended. While I generally like the S.I. dial, I wish the hands were a bit longer and larger. The minute hand doesn’t even reach the hour markers, much less the minute markers, making the impression of precision setting a bit difficult for the OCD among us. My other issue with the dial is the lume. On the S.I dial, the lume is, at best, adequate, and while nighttime reading isn’t necessarily difficult, it could be a bit brighter or look a bit better given the price point. 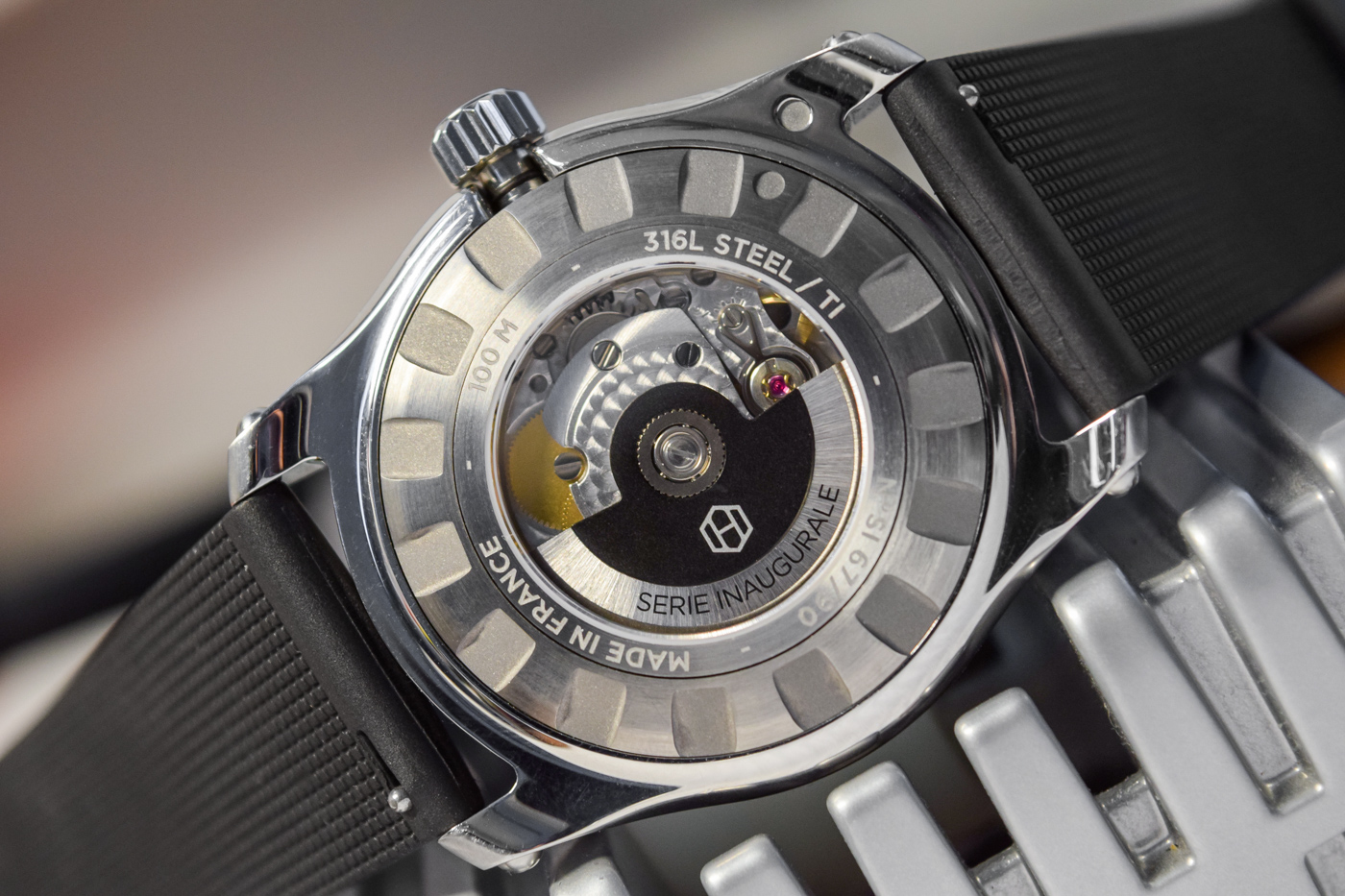 Staying inside the capsule, and before we even get to the three available case options, we need to address the beating heart of the Hegid system, a Sellita SW200-1 caliber featuring 26 jewels, a rate of 28,800vph, and a power reserve of around 40 hours. Hegid also assures me that the stock movements from Switzerland are carefully regulated at great expense (Hegid are promising plus 0-5 seconds a day) in the Doubs area of France, known for its quality watchmaking and training of watchmakers. Hegid has included a custom signed rotor on its SW200-1. The two capsules I tested both kept excellent time right within the specs Hegid was shooting for, one at about +2 seconds a day and the other right at +four (according to my Twixt app, anyway). 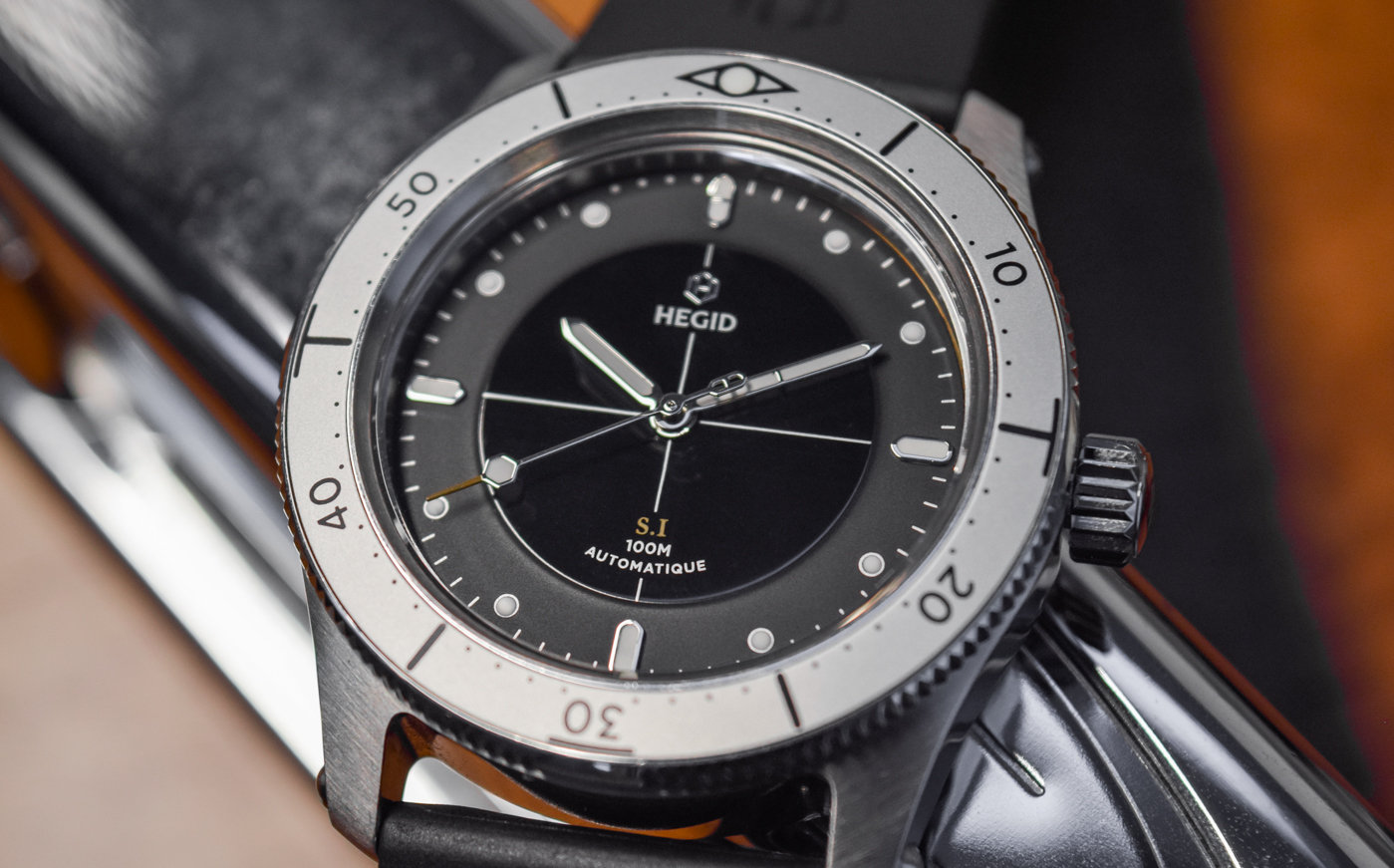 Hegid graciously supplied me all three of the cases they produce (with the exception of a recently released PVD version of the Vision case). Being a diver and sport watch enthusiast, my personal favorite, and the combination which I wore the most through the testing period, was the Vision case, a rotating bezel-equipped diver-style case. At 40mm in width and a reasonable 47mm in length, with a 22mm lug width, the Vision case is in the sweet spot for me size-wise, especially as far as lug-to-lug is concerned. 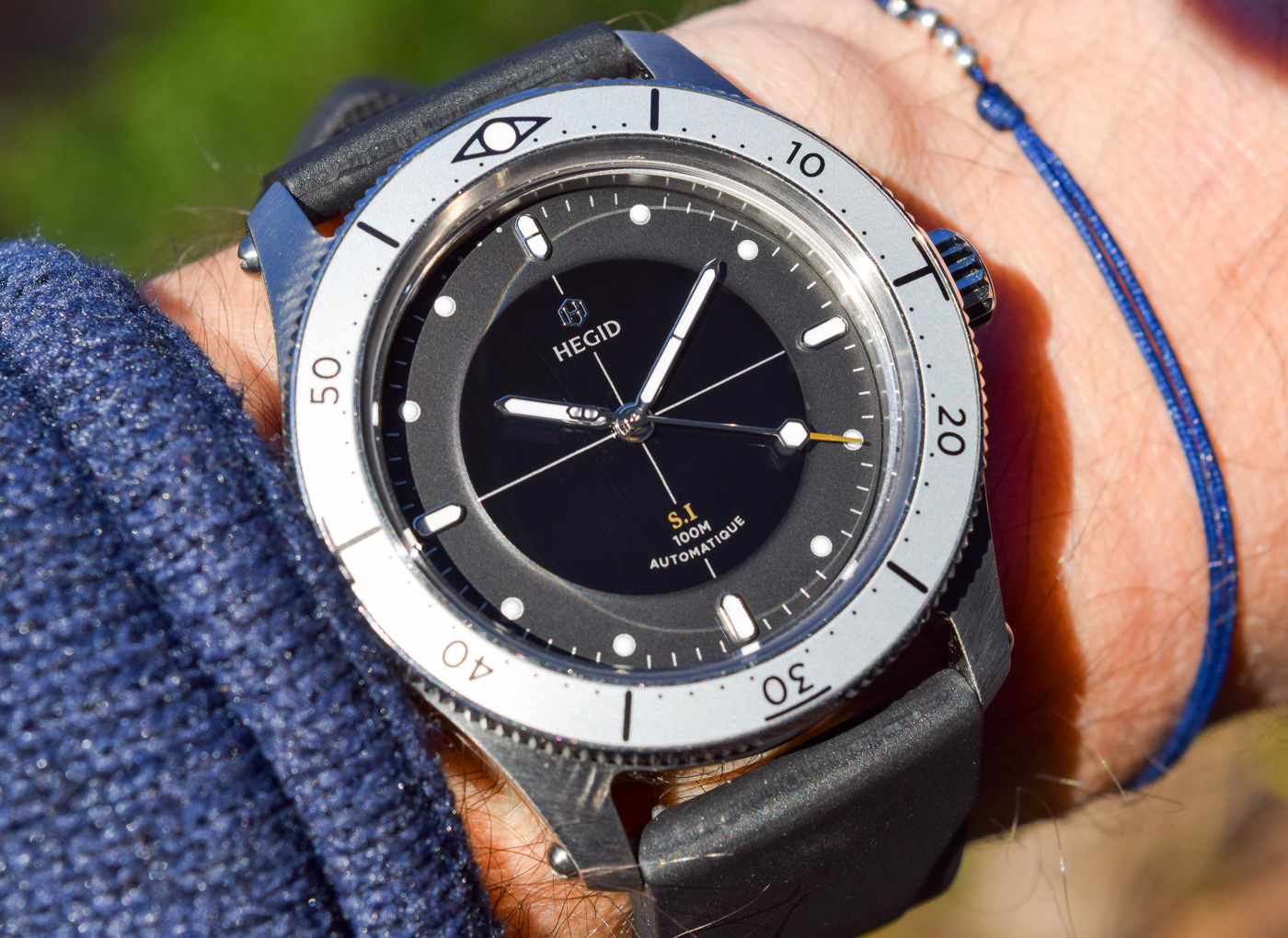 A traditional, 60-click bezel with an aluminum elapsed time bezel is reasonably well-executed, but for me doesn’t communicate the luxury feel the way a ceramic insert might have done. Hegid has also included a sculpted, oversized screw at each of the lugs, which, though it does look cool, doesn’t have any functional value, a fact which some utilitarian sport watch types may find offensive. The Vision case is brushed on top and polished at the sides and available with either a silver insert and lug screws or with a black insert and screws, each of which complements either module well. 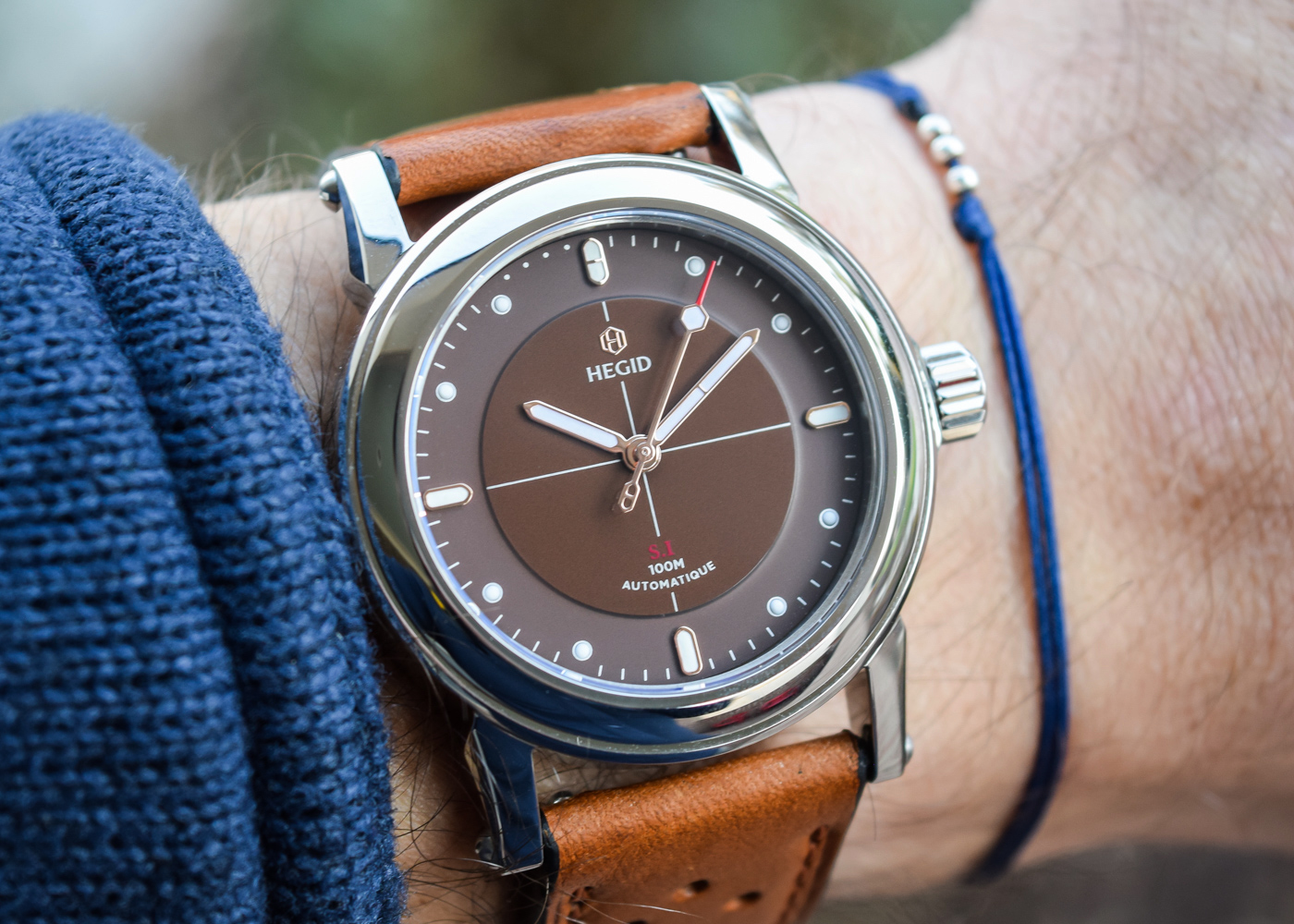 For those who appreciate a cleaner look, Hegid also offers the “Laboratoire Clandestin” (which means “secret laboratory”) case, a far dressier and smaller case at 38.5mm in diameter with the same 47mm lug-to-lug. The lugs are somewhat sculpted and artsy, and the whole thing is polished, if that’s your thing. If you’re going from a sporty activity to a dressier event, it really is cool to be able to quickly switch watch cases and bracelets for a totally different on-the-wrist experience. You could theoretically even bring another case in your pocket and switch on the go. Frankly, I enjoyed the Vision case so much I seldom wore this one, though it was cool to have options, which is Hegid’s entire value proposition in practice. 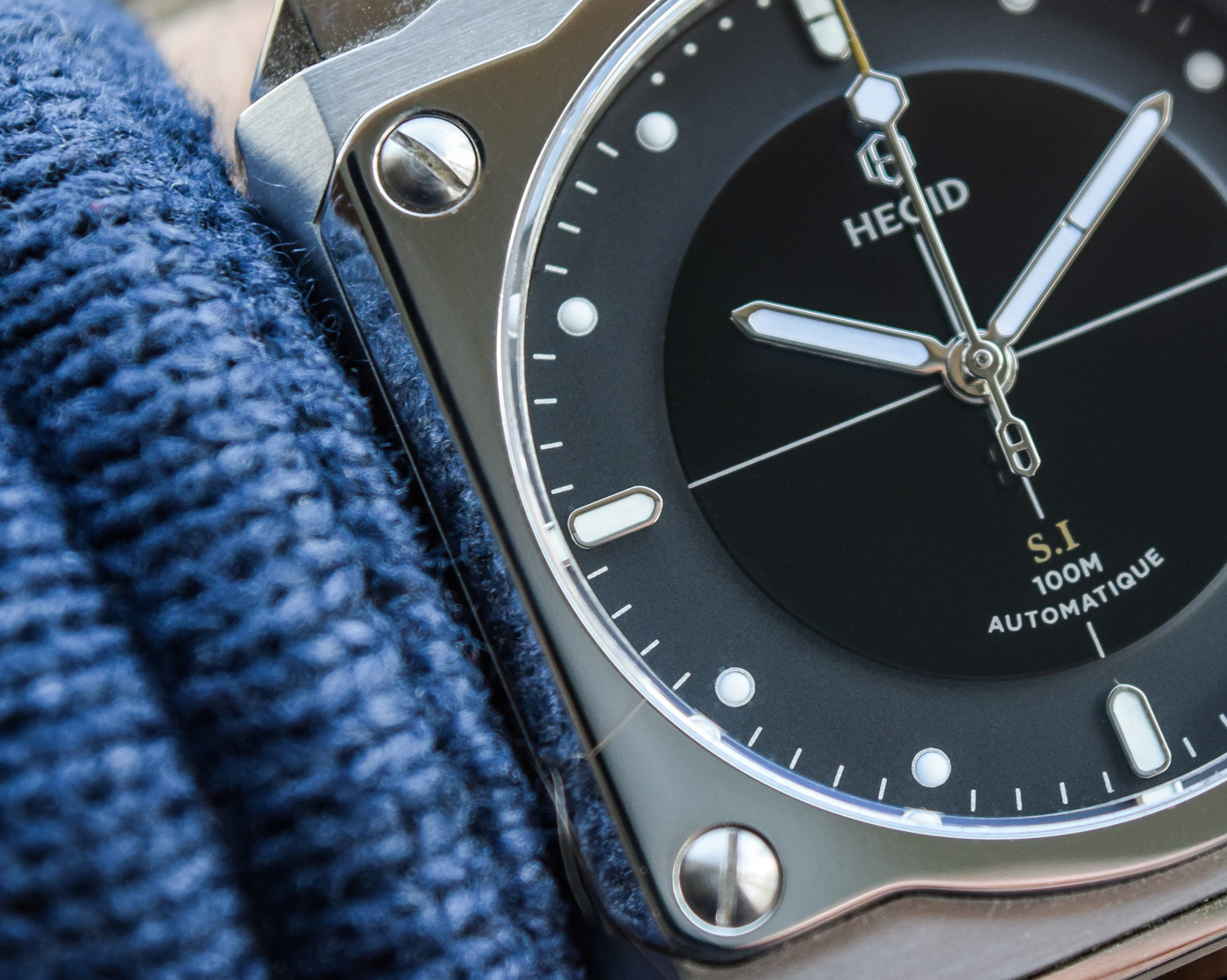 Finally, for those who enjoy a lot more of an aggressive or arresting look, Hegid offers the “Expedition,” a large, tank-style case that gives the Hegid a heck of a different look and feel on the wrist. At 46mm in width and 49mm lug-to-lug (and still with 22mm lug width), the Expedition case is huge and, in my opinion, simultaneously looks a bit crazy while also making the dial appear too small. Hegid is definitely going after the art and design set with its collection, but for me, this case is a miss. I never wore it out of the house. For the right (larger-wristed) person, the Expedition might look ok, but I suspect most Hegid customers will sport one of the other two attractive options. 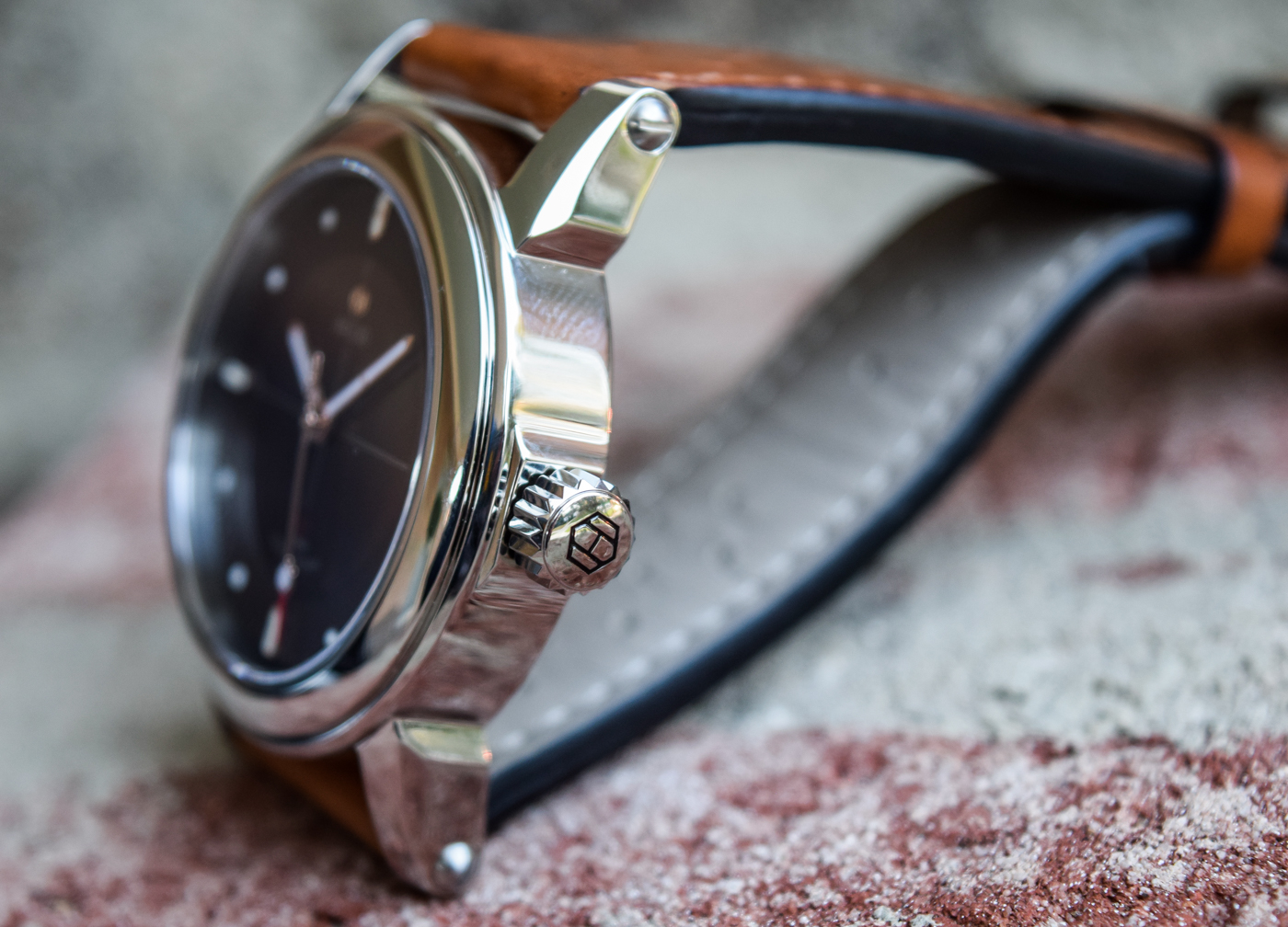 Speaking to the Hegid cases in general, the level of artisanship is impressive. Lugs and alternations between polished and brushed surfaces are sharp and really well done, better than many watches even in this price point. In addition, each case fits the movement module really well, making a visually seamless impression that the watch is not hastily put together, but, in fact, built as a unit. As far as the inner case surfaces, where the module will eventually rest, the level of craft is really something to see, demonstrating the thought and engineering that went into the overall design concept. I suspect that, as Hegid’s offering grows, the brand will produce more and more cases to fit a wider variety of tastes. Personally, I’d like to see some different rotating bezel case options and maybe even a GMT bezel. At around $300 each, it’s a somewhat inexpensive way to update your collection if you’ve already purchased the capsule. 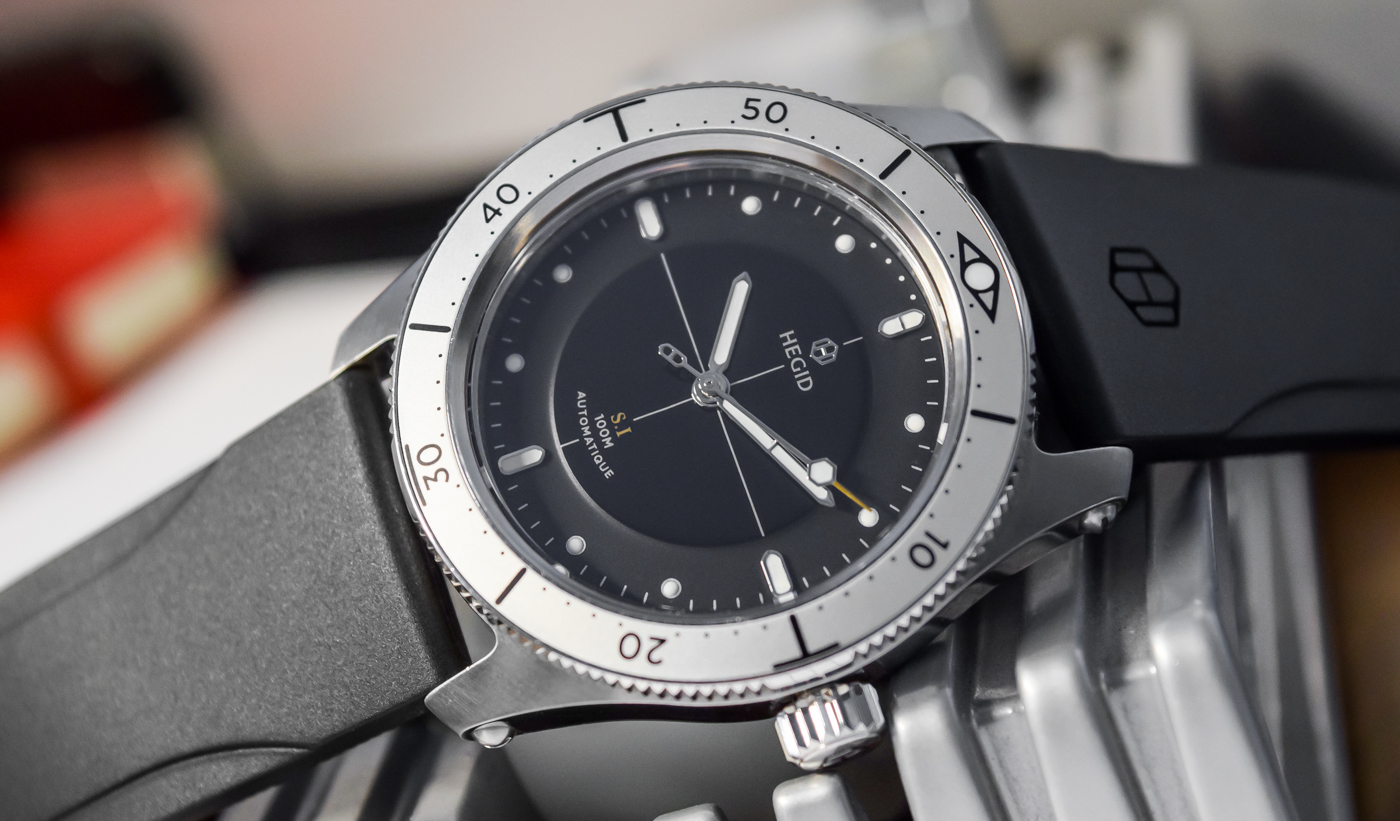 Though it’s been done before (Farer has more or less the same trick, as do others), Hegid’s quick-release straps are one of the most impressive and fun aspects of the whole collection. They are about as high in quality as any other straps you’ll come across from any brand. The set I received included a huge variety of straps to include Italian-made vanilla-scented rubber, perforated rally-style, and smooth-finished leather straps in several colors. Strap-wise, Hegid supplies something to please everyone, and the easy changing means you can change straps right along with your mood to keep the watch interesting and fresh. I’ve tried to include photos of a huge variety of set-ups so you really get the idea of how customizable the concept is in practice. 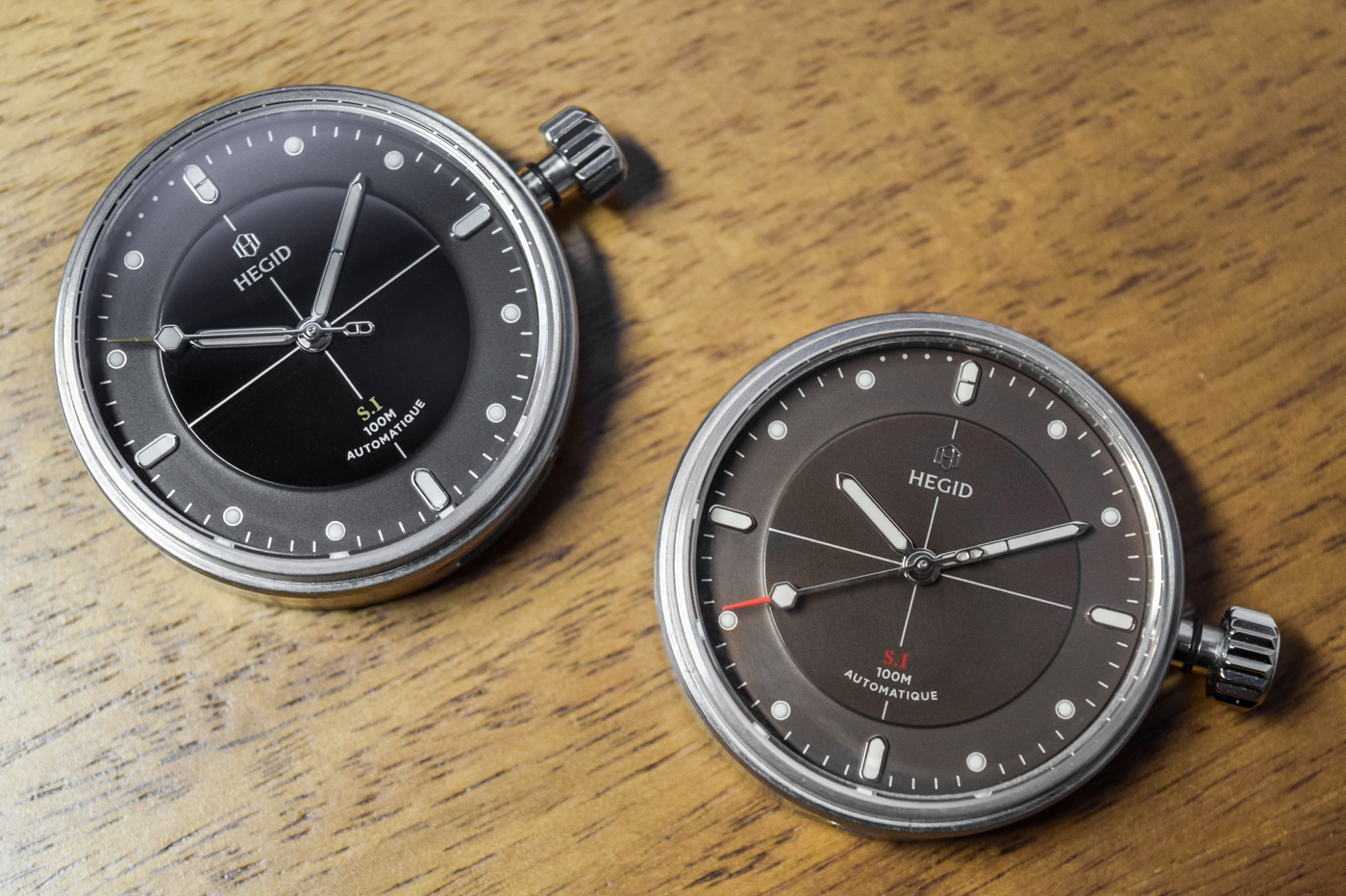 I have a feeling Hegid will be a bit controversial for some watch enthusiasts. Every new idea is a bit that way. I am confident that the Expedition case, in particular, will garner its share of snark in the shadowy corners of the Internet and our own comments section. But, having said that, Hegid is worth a detailed look, not only because it is genuinely attempting to bring a new concept to an often stale watch market (Woah, another rereleased vintage diver!), but also because these watches are of exceptional quality and exhibit beautiful artisanship. Beyond that, my only other small issue is that the capsule, at times, shifts just a bit in some of the cases, making a subtle clicking sound as you’re moving around. It certainly wasn’t a big deal, but could be annoying to the forementioned OCD-afflicted among us. 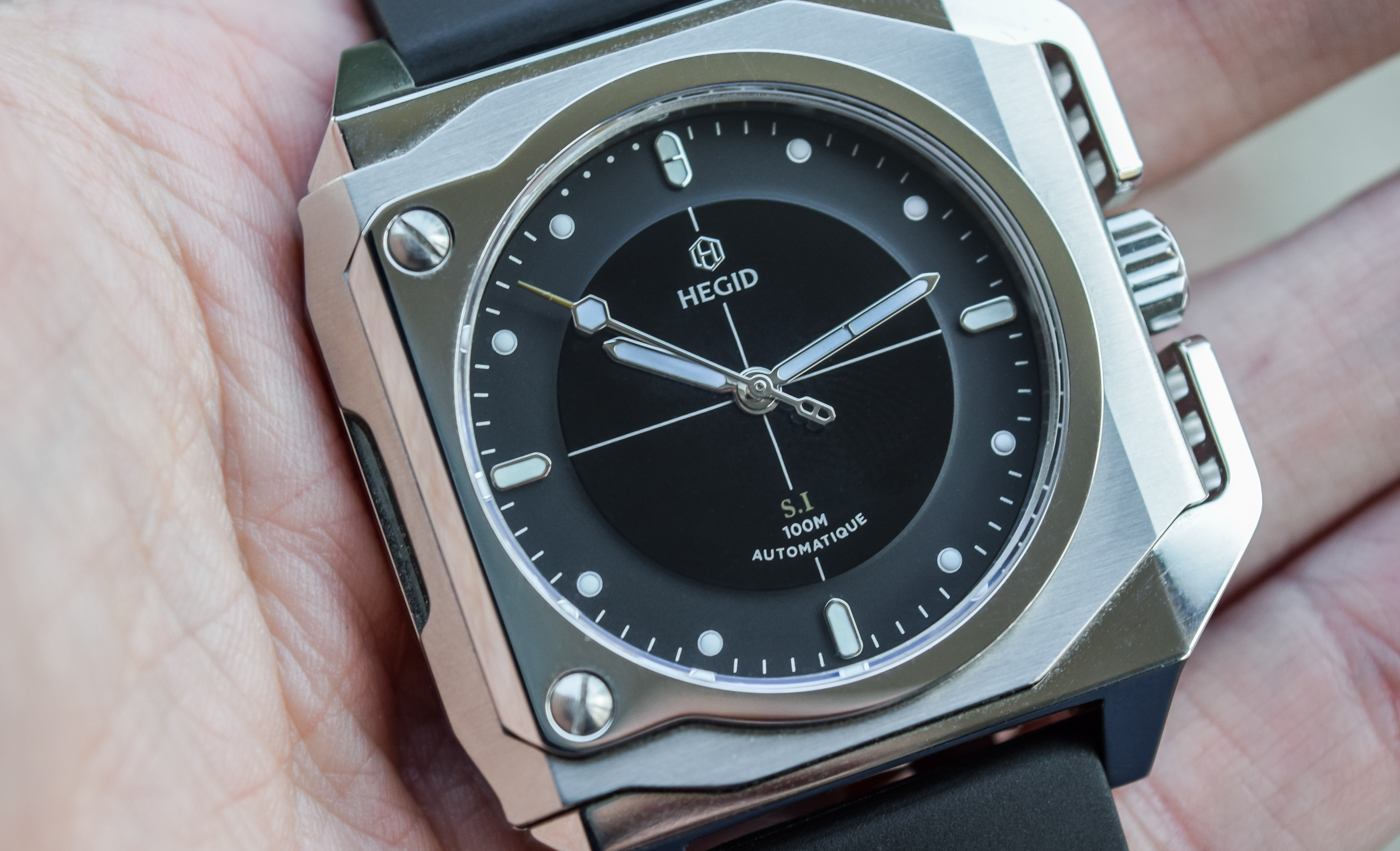 In practice, I very much enjoyed wearing the watch in the Vision configuration, and I changed modules and straps pretty often simply because I could. It’s fun. For those who balk at the price, we can be reminded that many more established brands often include the very same movement (without Hegid’s high level of finishing and adjustment) in their watches, which cost even more. Value will always be subjective, but if you’re interested in what Hegid is doing, you’ll come away impressed when you get the watch, or indeed, watches. I, for one, am excited to see what Hegid comes up with going forward, as the collection expands to include more interchangeable ideas and possible watch configurations. The Hegid in the Vision configuration retails for about $3,100 USD, depending on exchange rates. Learn more at hegid.com.

Necessary Data
>Brand: Hegid
>Model: The Inaugural Series Capsule is available in the Vision, Laboratoire Clandestin, or Expedition cases.
>Price: €2,800 or about $3100
>Size: Vision: 40x47mm. Laboratoire Clandestin: 38.5x47mm. Expedition: 46x49mm.
>When reviewer would personally wear it: As a funky and dressy option, yes.
>Friend we’d recommend it to first: The fashion and luxury-oriented collector with proclivities for all things French.
>Best characteristic of watch: Interesting design concept achieved in a thoughtful way.
>Worst characteristic of watch: In certain configurations, the module makes a bit of noise in the case as you move around. 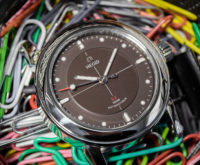 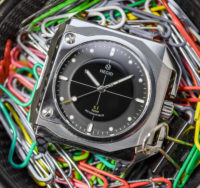 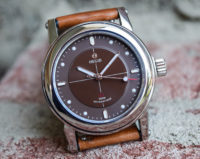 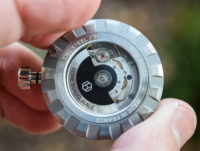 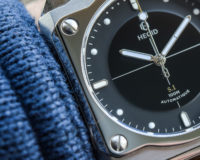 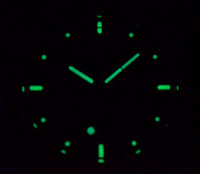