Microbrands occupy an odd space in the watch world, in large part because of the staggering diversity captured by that one umbrella term. On one end of the microbrand spectrum are the countless Rolex Submariner “homages” and fly-by-night Kickstarter projects whose design process consists of picking a logo and selection of off-the-shelf parts, thereby “disrupting the watch industry.” On the other end of the spectrum are passion projects created by dedicated watch enthusiasts truly looking to create something new and different with a unique design language. Even a cursory glance at the Marnaut Dark Surge reveals that it falls squarely in the latter camp of enthusiast-driven brands. 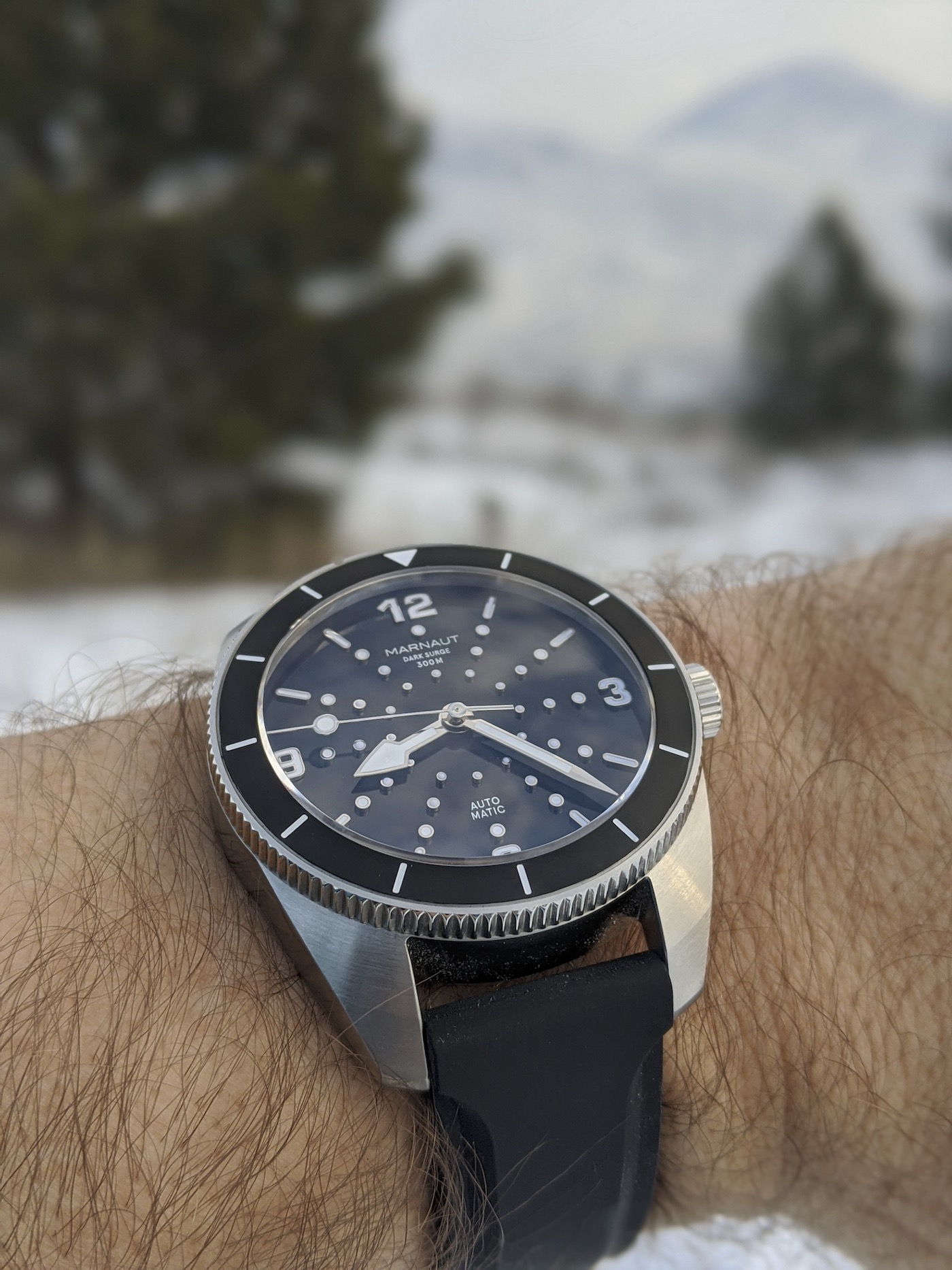 Founded in 2018 by Mario Jutronic, the Croatian brand’s inaugural offering is the Marnaut Dark Surge dive watch. The concept behind the Dark Surge was to create an original but enduring design with functionality at its core. This is a watch inspired by a love of the ocean — a sea urchin shell provided the blueprint for the dial design — and features like 300m of water resistance, a sapphire crystal, and amply applied C3 Super-LumiNova promise that the Dark Surge will be right at home beneath the waves. Sadly, I live far from the ocean, but I had the chance to spend plenty of time with the Dark Surge on my terrestrial adventures to see how it fared as a daily companion. 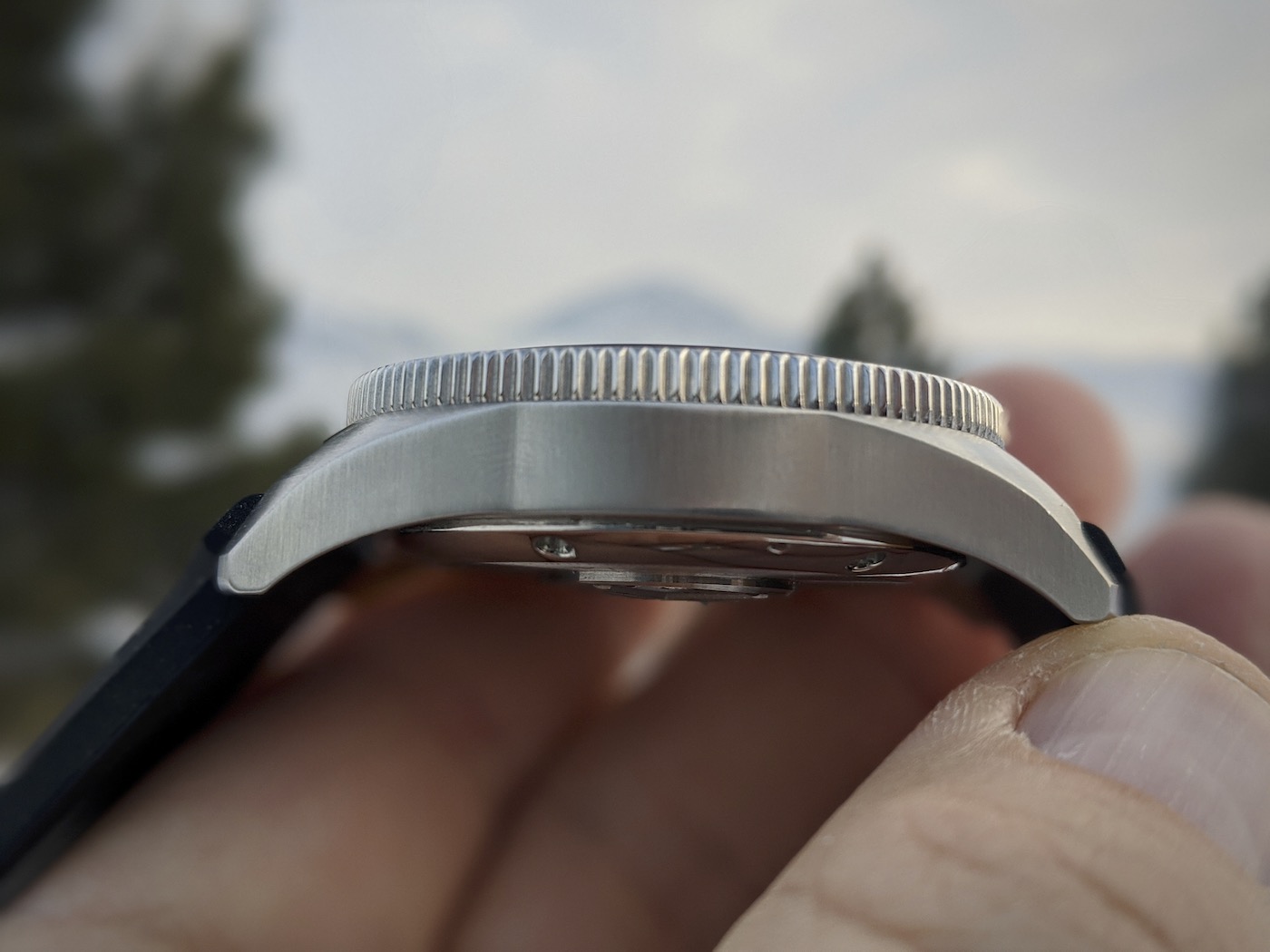 Coming in at 42mm-wide in a stainless-steel case and 13mm case height, the Marnaut Dark Surge is on-trend for a modern diver, but the case shape itself alters the proportions due to its long and chunky ~53mm lugs and a 20mm lug-width. The result is that the watch appears larger on wrist than its 42mm case might suggest. To be clear, this is primarily a visual issue. The long lugs slope down steeply, hugging the wrist, so even on my 6.75” wrist, I had no problems with comfort or wearability. 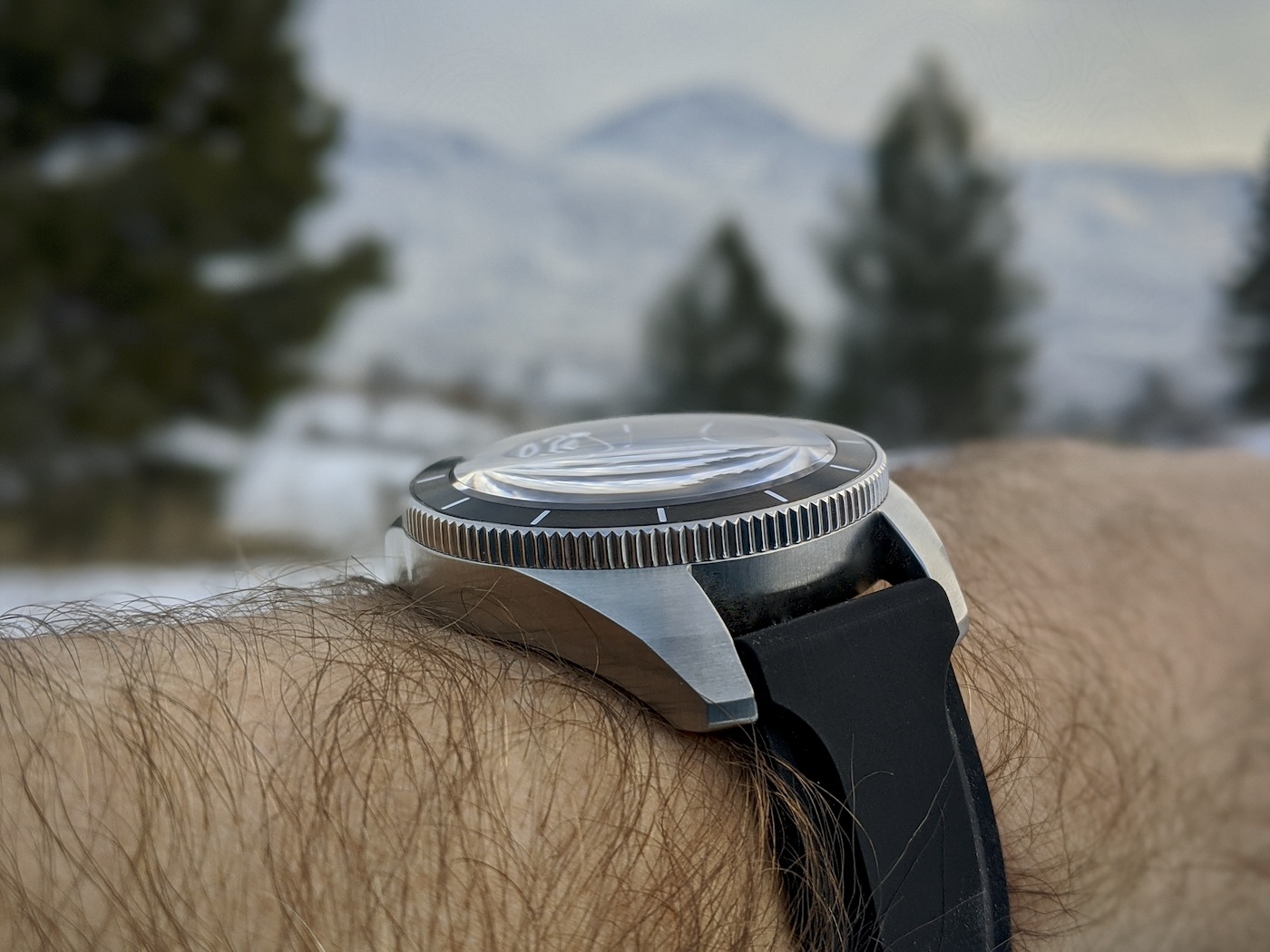 The case itself is blocky with hard angles and no beveling or mixed finishing to soften the lines. The angles aren’t as severe as a Stowa Prodiver or Omega Ploprof, but the watch gives off a similar utilitarian, almost industrial, aesthetic. The massive lugs are distinctive and are likely a product of opting for a 20mm lug-width. Personally, I prefer 20mm straps over 22mm, but 22mm would have reduced a bit of the bulk from the lugs and perhaps aided the proportions. Even at this reasonable price point, I would have preferred a bit more refinement. Some beveling and polishing on the lugs could have reduced the visual heft and set off the high polish markers on the dial, increasing the watch’s versatility.

The Dark Surge features a 120 click unidirectional bezel with crisp, positive action. Of note is the absence of numerals on the bezel itself. You’ll find a triangle at 60 and dashes every 10 minutes, but that’s it. While you lose functionality for timing, turn off the lights and the design choice makes a lot more sense. The bezel markers are all lumed and play off the radiating applied markers on the dial to create a unified design. It’s an impressive effect that’s hard not to enjoy. Rounding out the case features are a domed sapphire crystal, signed crown, and decorated caseback. Rather than an engraving, a stylized M logo is raised on the center of the caseback. Nice touch. 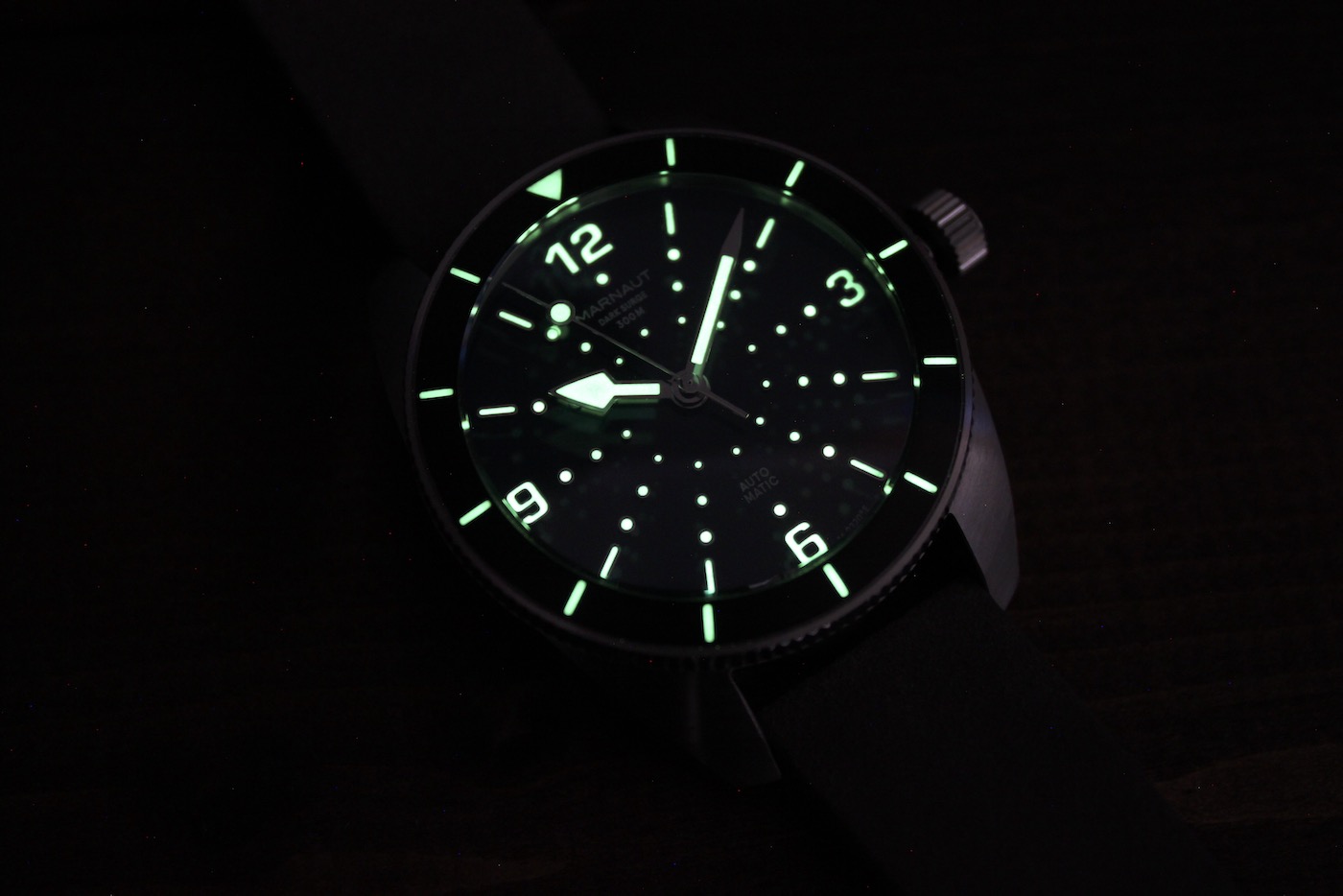 So far, nothing about this watch has strayed far from path of a typical diver. But things change when we get to the dial — and this is where the watch truly shines. Starting at the outer edge of the dial, the hours are indicated by applied rectangular markers, with consecutively smaller circular markers moving inward toward the center of the dial, only broken up by applied Arabic numerals at 3, 6, 9, and 12. Marnaut explains the inspiration for the dial as coming from the shell of a sea urchin. I can see that, and I’d imagine that link to the sea would be even more apparent on a sunburst blue dial. I confess that when I look at the dial, I’m transported into the Millennium Falcon entering lightspeed. Either way, the closest parallel in dial design I can think of is the ZRC North Adventure… but really, it’s not that close. 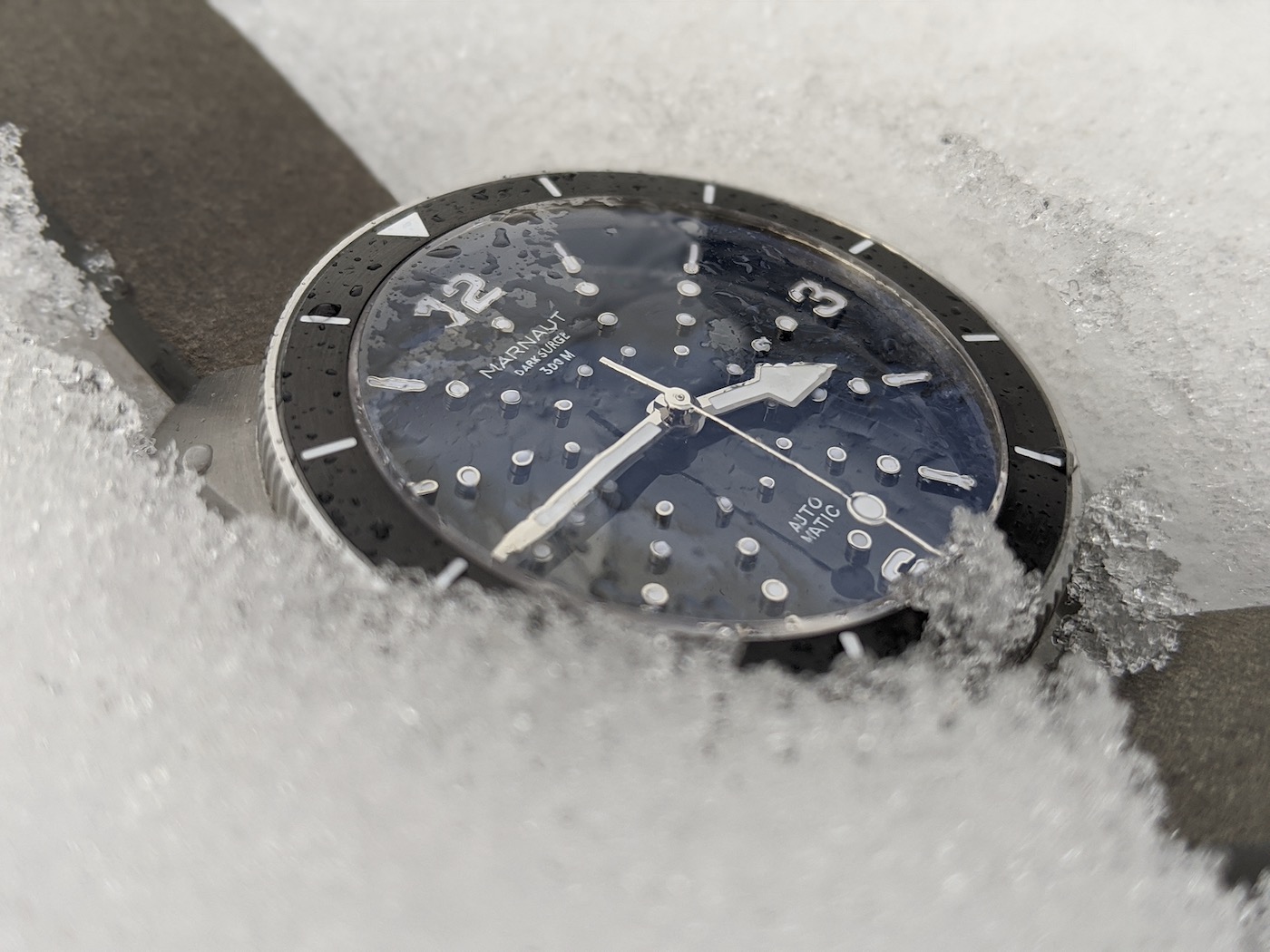 I applaud Marnaut for its creativity; it’s always refreshing to see something new and daring from a young brand. Initially, I thought that the abundant applied markers would enhance legibility; however, I actually found them a little distracting but not to the point of reducing readability. Because they’re so integral to the dial design, I wouldn’t change a thing. The handset keeps things simple, allowing the focus to remain on the dial. The modified arrow hour hand and straight minutes hand are reminiscent of the Tudor Ranger handset but depart by using a lollipop seconds hand. Like the markers, the hands are all high-polish with C3 Super-LumiNova fill. 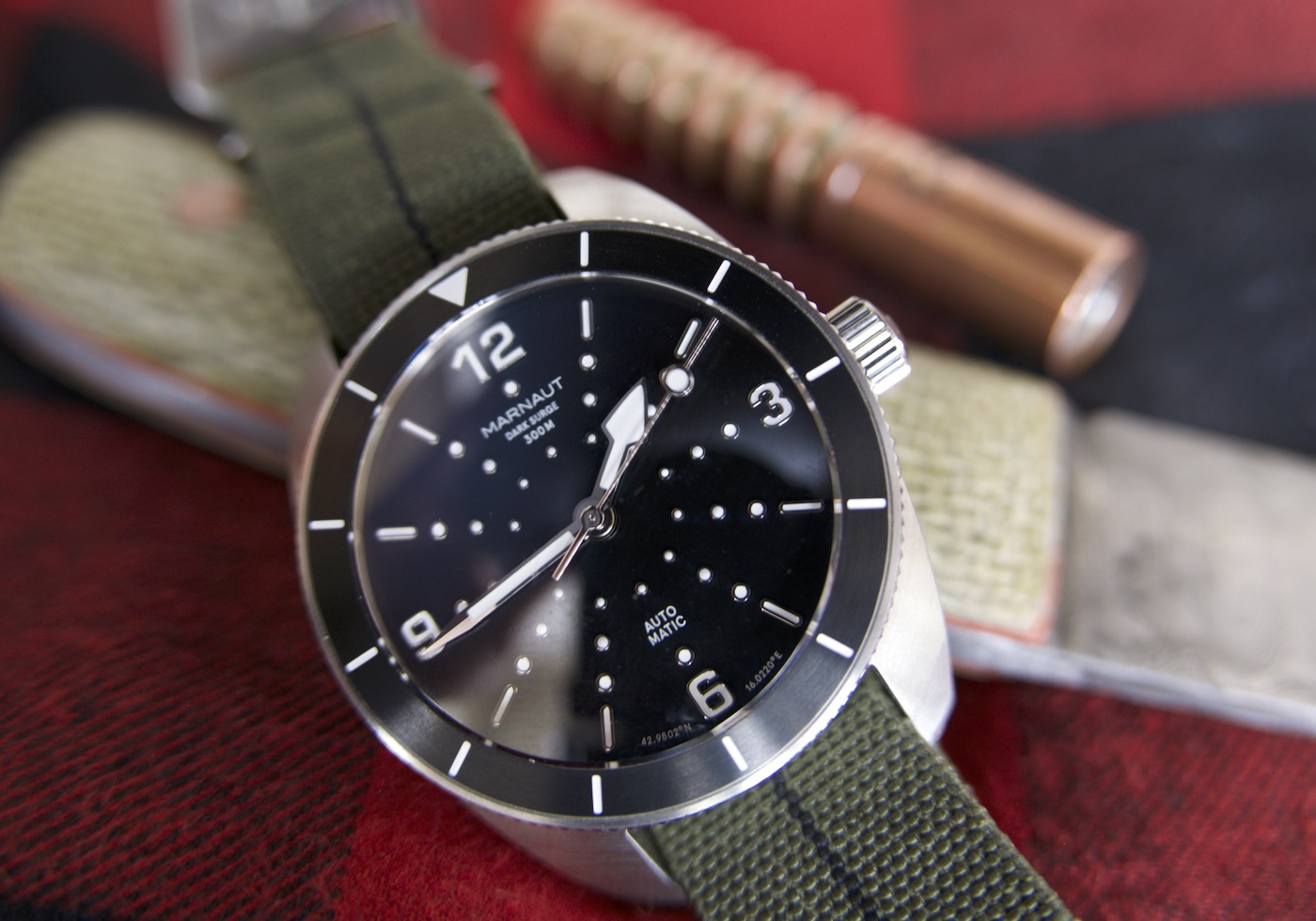 In terms of dial text, Marnaut keeps things minimal and balanced. One gripe I have is that the absence of minute markers makes setting the time a bit tricky. If you care about the exact placement of the minute hand while setting, tough luck. Fortunately, this issue will be remedied with Version 2 of the Dark Surge. The branding under 12 is balanced by auto and matic split into two lines above 6. It’s a bit odd but provides dial symmetry, so I’ll take it. One small detail that’s easy to overlook is the longitude and latitude provided in place of the typical “Made in” designation at 6 o’clock. Type the coordinates into Google Maps and you’ll be transported to Biševo, Croatia, a small island in the Adriatic Sea, home to the Blue Cave, a popular diving destination. A small touch, but I love it. 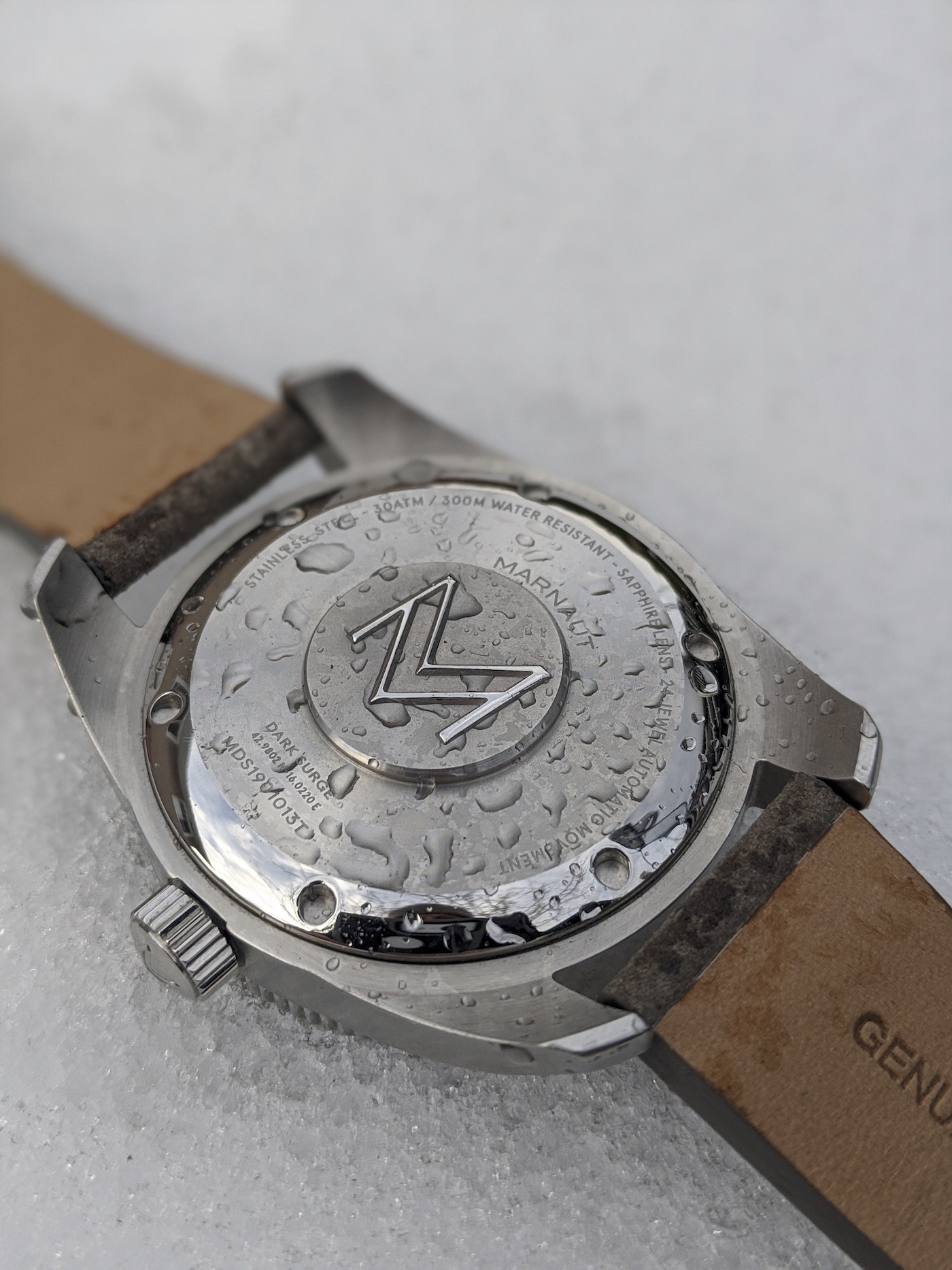 The Marnaut Dark Surge is powered by a Miyota 9015 automatic movement that features hacking seconds, a 42-hour power reserve, and beats at 28.8kbph. At this price point, the movement is a solid, reliable choice and, as expected, I had no issues with the movement. The downside to the Miyota 9015 movement is rotor noise. In daily use, it’s not noticeable, but put the watch up to your ear (or in a quiet room) and give it a shake and you get more feedback than other movements like an ETA 2824-2. Again, not noticeable a majority of the time but something worth noting. 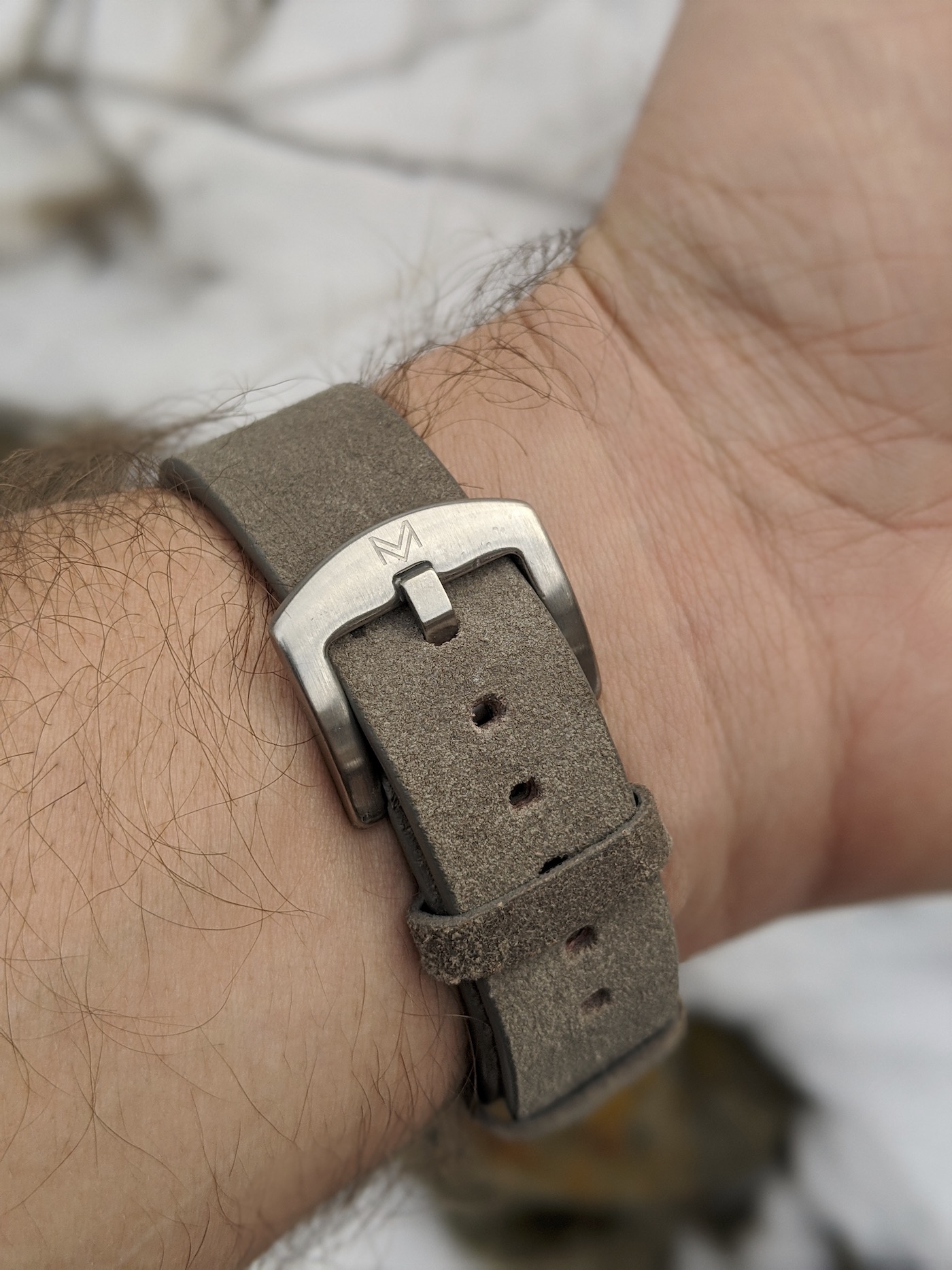 The Marnaut Dark Surge comes mounted on a silicone strap with signed buckle. The strap is pliable and comfortable and would be a good companion for any water activities. The only downside to silicone is that it acts as a lint magnet. The great thing about a black-dial diver, however, is its versatility when it comes to straps. Marnaut also provides a grey Italian leather strap that provides a handsome pairing, but given the fully brushed surfaces and hard angles, it’s hard to say it dresses up the watch. Though both straps were solid pairings, I also switched things up, spending time wearing the Dark Surge on a dark grey Phenomenato strap and a dark green Erika’s Originals strap. As I said, black dial divers are fantastic if you like to change up the personality of your watch with a variety of straps, and I enjoyed experimenting with different looks. In the end, the grey Phenomenato was probably my favorite pairing.

One important note is that Marnaut is currently developing a three-link bracelet that will be available for the next iteration of the Dark Surge. From my quick peek at the prototype, I’m sure this will be an option that will appeal to many buyers and one I’d be eager to try. 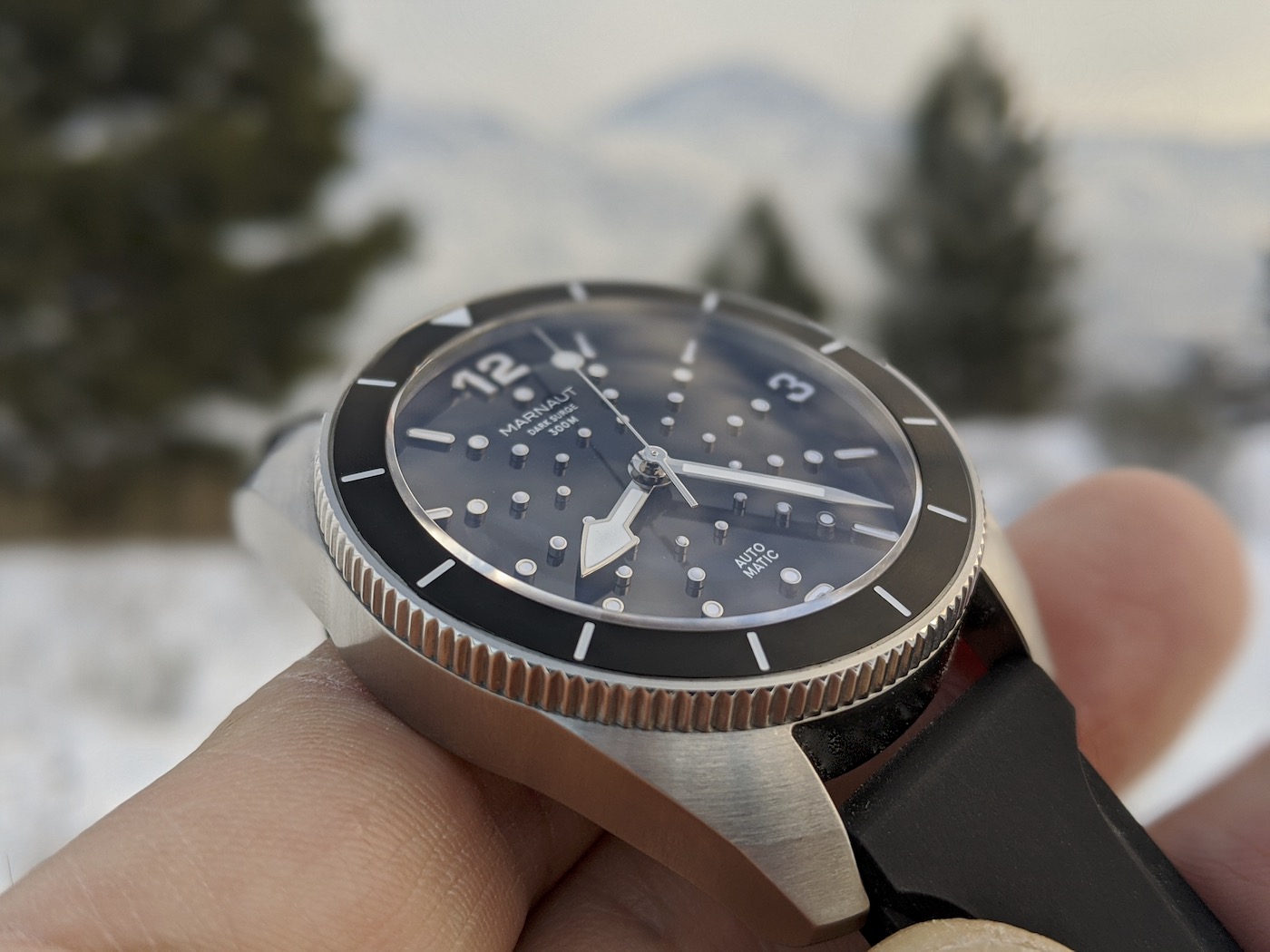 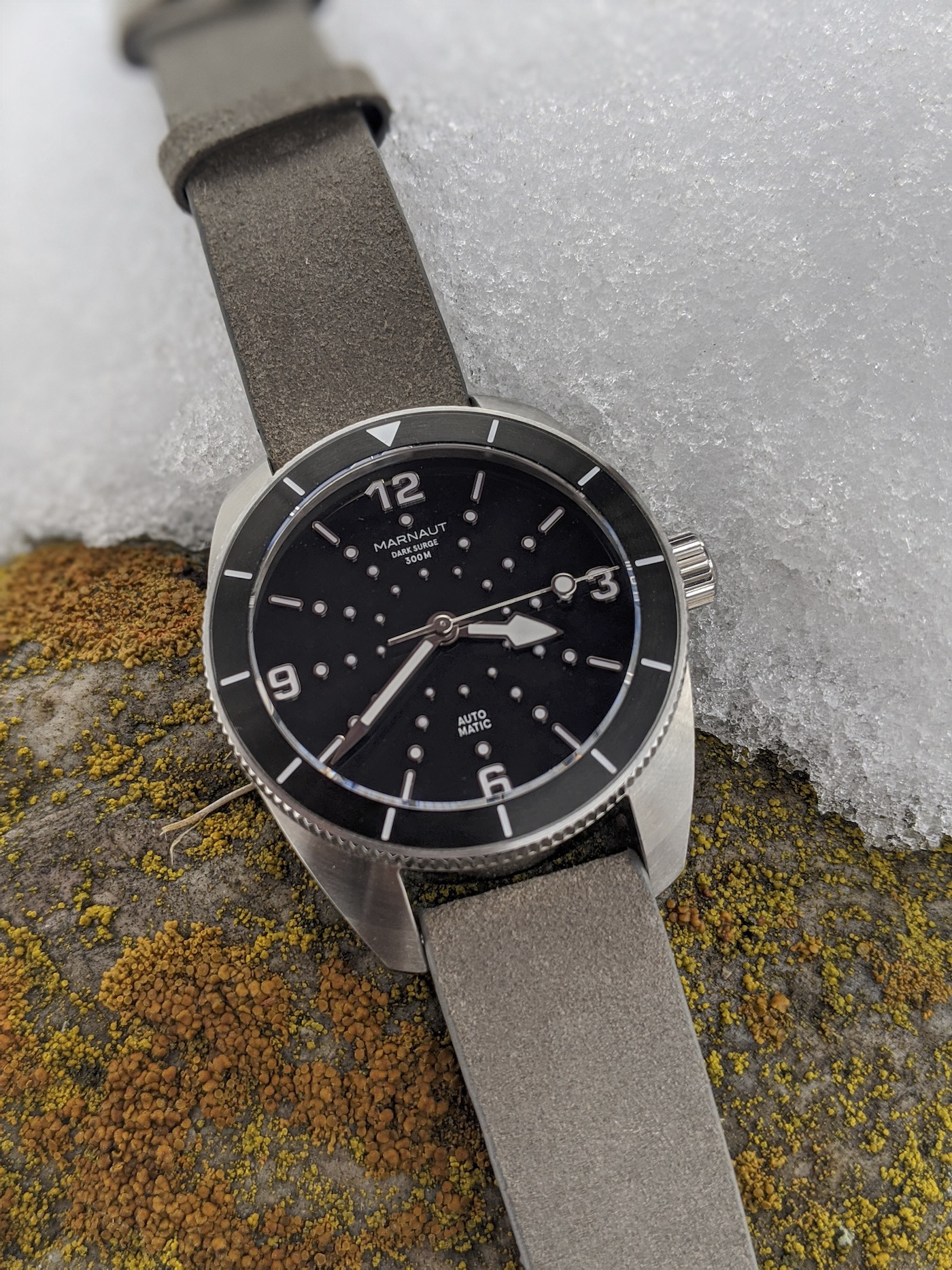 Black dial divers from microbrands around the $500 price point aren’t exactly rare, but I take notice when a brand manages to release a watch in this incredibly competitive space that stands out from the crowd with attractive and original design language. If the black dial and black bezel aren’t your style, the Dark Surge is also offered with a black dial and steel bezel or with a blacked-out PVD case and bezel. I’m glad to see that Marnaut is already addressing some of the Dark Surge’s shortcomings by adding minute markers and offering a bracelet option, but a bit more refinement on the case would be welcome. Regardless of these quibbles, the Marnaut Dark Surge captured the best of what microbrands can be: playgrounds for experimentation in design, driven by a passion for watches. I’ll be watching closely to see what this small Croatian brand does in the future. The Marnaut Dark surge is priced at $549 and more information can be found at marnaut.com.

Necessary Data
>Brand: Marnaut
>Model: Dark Surge
>Price: $549
>Size: 42mm-wide, 13mm-tall, ~53mm lug-to-lug, 20mm lug-width
>When reviewer would personally wear it: As a fun, casual watch, especially at the beach.
>Friend we’d recommend it to first: Someone looking for an affordable diver with a novel design language and interesting backstory.
>Best characteristic of watch: The dial. Simply cool.
>Worst characteristic of watch: A lack of refinement on the case, particularly the blocky lugs. 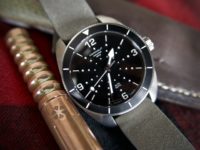 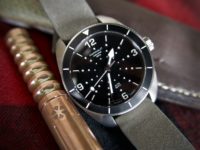 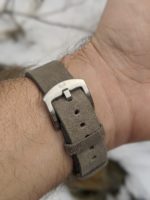 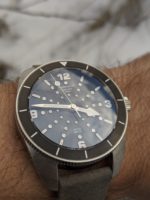 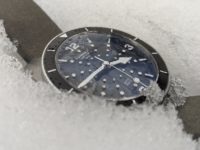 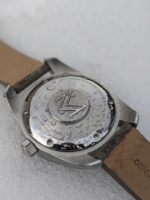 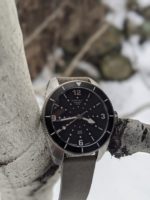 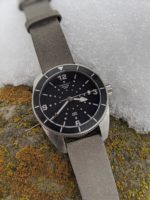 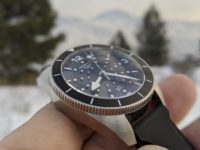 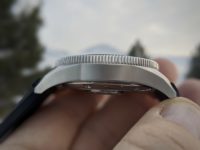 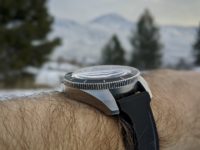 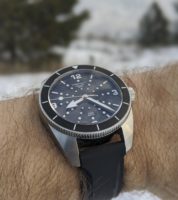