I have a lot of fun collecting modern watches that many people have forgotten or never knew about to begin with. This opens my story about the truly cool Bugari Diagono X-Pro timepiece. It was in 2010 that Bulgari released the Diagono X-Pro model (on aBlogtoWatch here), and produced it (along with one limited-edition variant) for a very short period of time. I don’t believe that was because the X-Pro was not a good product, but rather because of strategic shifting at the company along with new corporate ownership. Recall that just a year after the Diagono X-Pro was released, Bulgari was acquired by LVMH in 2011 for more than $5 billion. This saw a lot of immediate strategic changes which pulled Bulgari out of much of the sports watch arena — with more of a focus on “high-design” formal or classy watches, as well as very high complications and jewelry watches. While sport watches will always be an important part of the Bulgari tradition, the Diagono X-Pro was the last (for now) of the ultra-modern high-priced sports watches that we saw a lot of from roughly 2000-2012.

Recall, as well, that the Bulgari-designed the Diagono X-Pro to compete with products such as the Hublot Big Bang and the Audemars Piguet Royal Oak Offshore. The Diagono X-Pro was priced more or less between the two and was supposed to be an attractive alternative with a bit more detailing and technical pizazz. The X-Pro did, however, have a few things going against it. First, it was released at the end of a major economic crisis, at the outset of when the Swiss watch industry was redoubling its efforts on the Chinese market. At least at the time, large-sized sports watches like the Diagono X-Pro were not what sold in that market. Things evolved after a few years, but in the 2010 era, a timepiece like the Diagono X-Pro was both a bit too late to the market and a bit more expensive than many in the West wanted to spend. 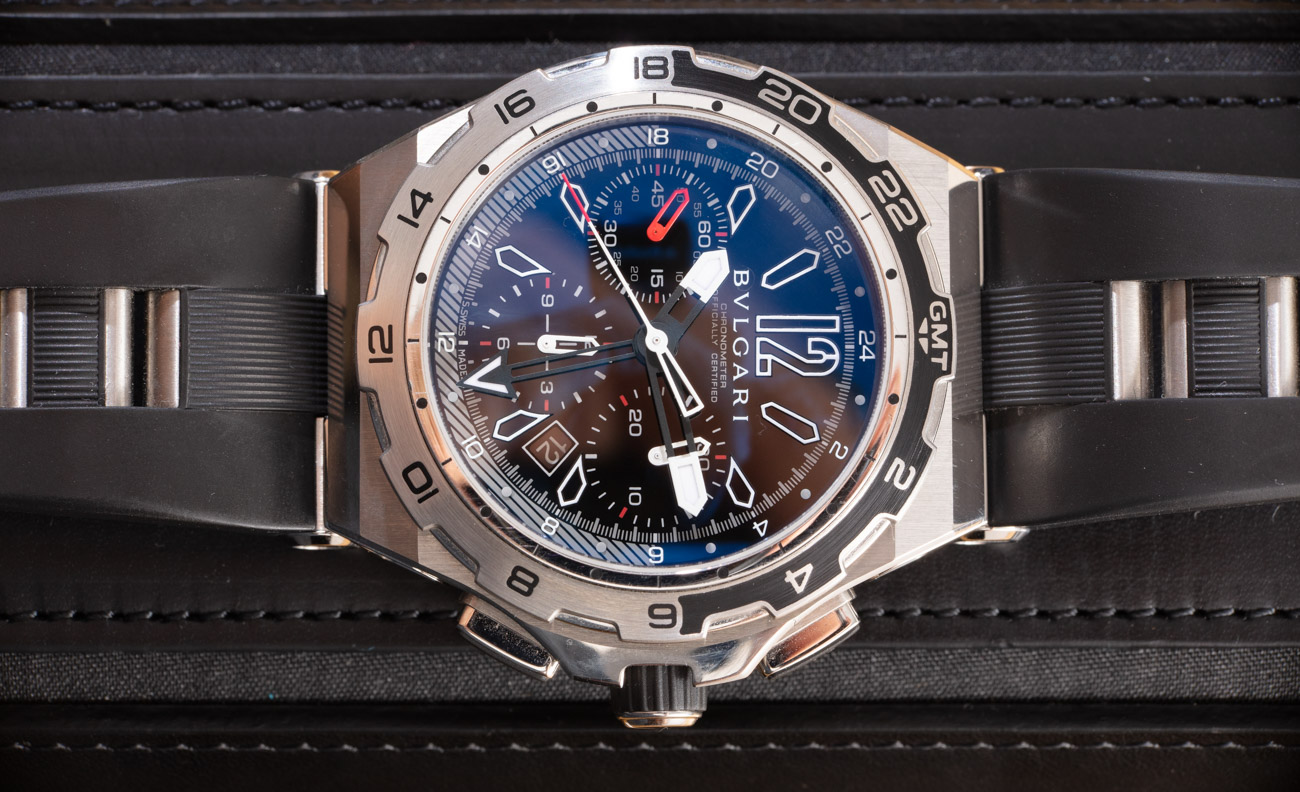 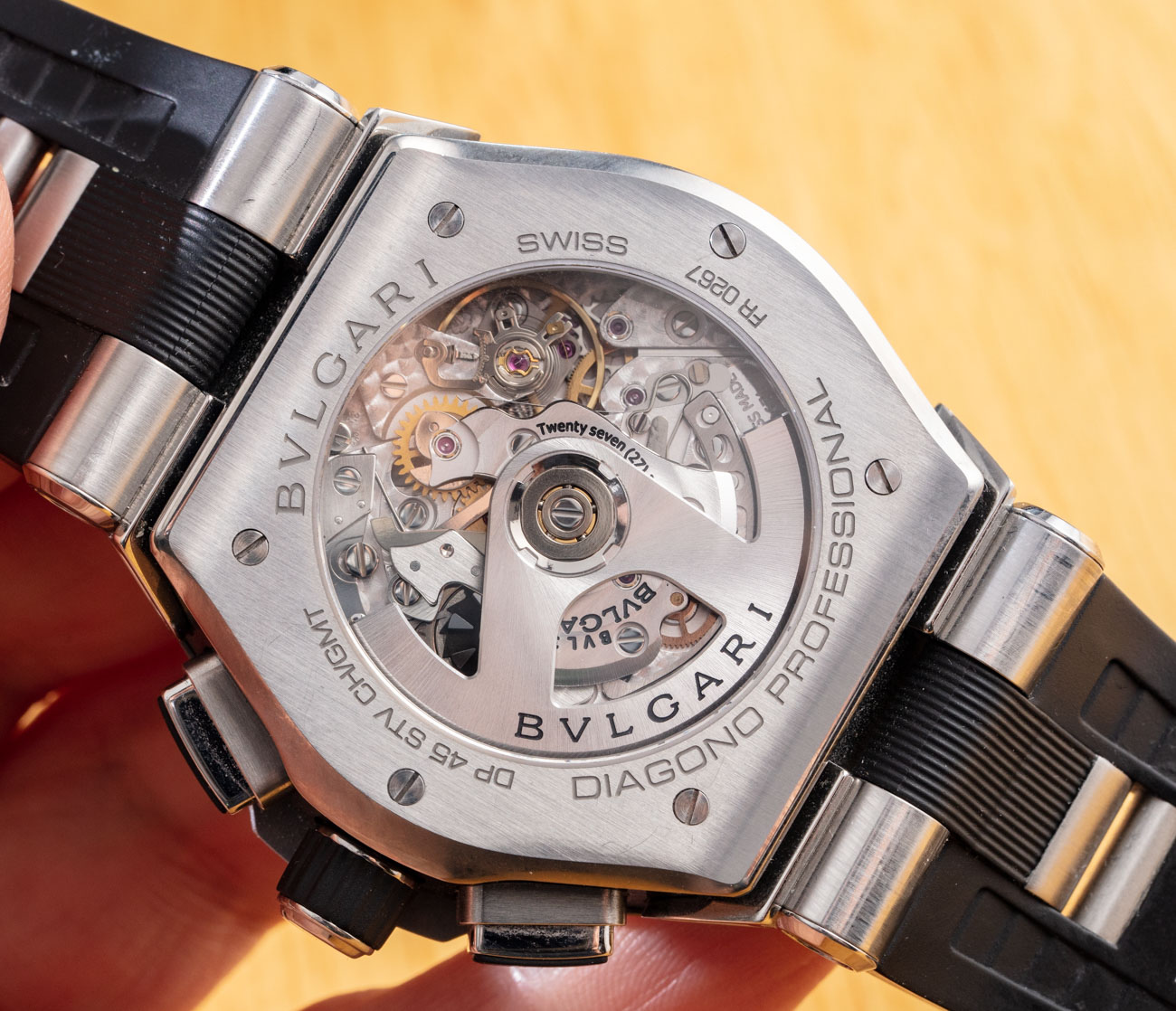 At 45mm-wide, the Diagono X-Pro case is a technical masterpiece in my opinion. Taking inspiration from Hublot’s “fusion” concept as developed by Jean-Claude Biver, the case was intentionally designed to highlight a series of materials that were considered important at the time, and include steel, titanium, rubber, and sapphire crystal. The watch also has an inner section that was given a black DLC-coating, which was still a bit novel at the time.

The Diagono X-Pro case design was a merger between the traditional Bulgari Diagono and in my opinion, the Hublot Big Bang. The case is comprised of a massive 104 parts, which is far more than most even very high-end watch cases. More watch cases are produced from under 20 parts (includes screws, etc.). The standard watch case has a bezel, middle, and caseback making for a “three-part” case. A fair question is how water resistant the X-Pro case is. The answer is “I don’t know.” The case itself is silent on the matter. I suspect 30 to 50 meters of water resistance. 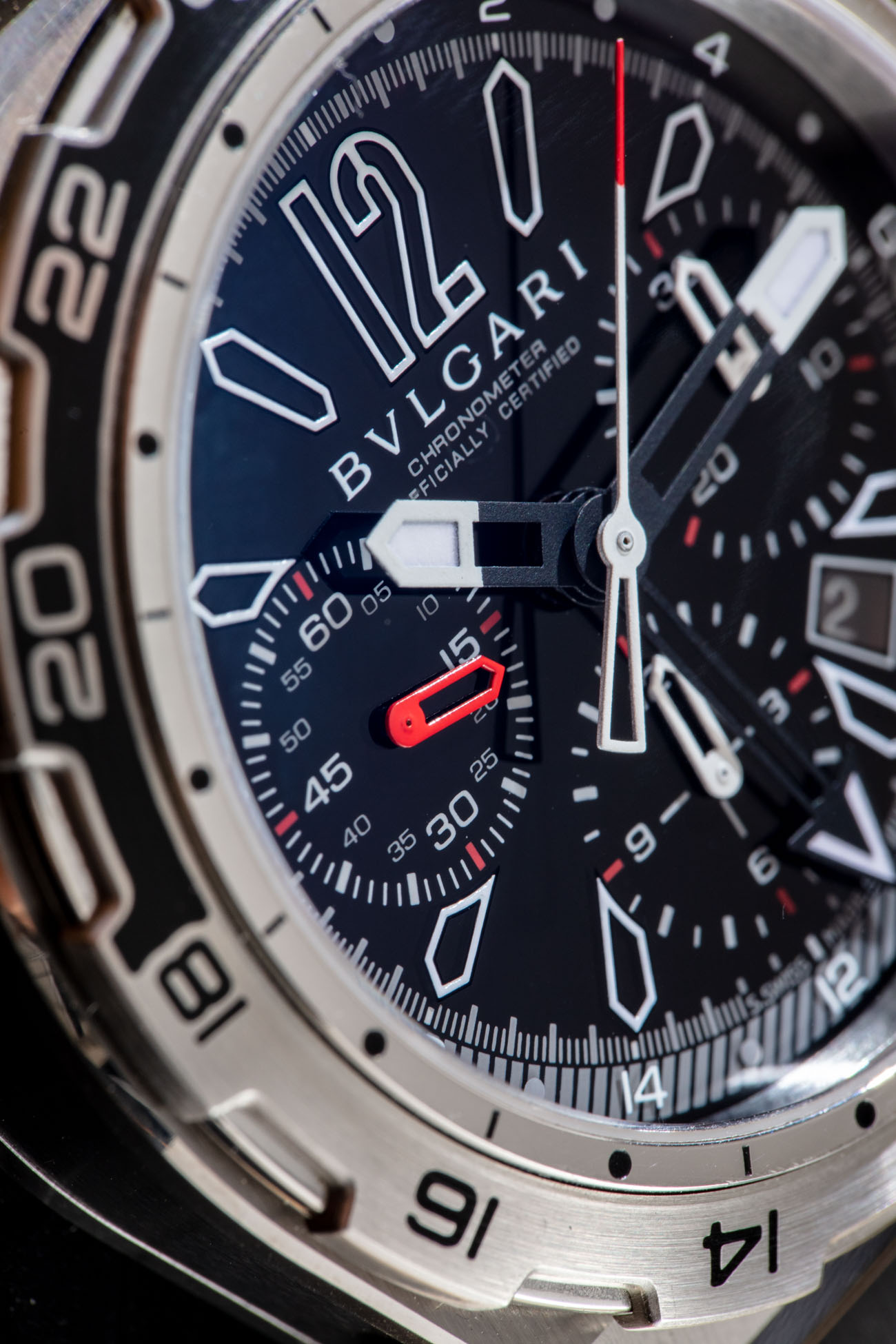 Most all Diagono watches from Bulgari have a distinctive case design element that has a door hinge-style connection between the strap and the case. This articulation point makes for a more comfortable wearing experience and is expressed very well here. Despite the 45mm and roughly 19mm-thick case, the Diagono X-Pro wears very comfortably and securely on the rubber strap with the articulating lugs. Here, for example, you can read my aBlogtoWatch review of the Bulgari Diagono Scuba watch to see how the hinged lug assembly tends to normally look on Digaono family watches. The bespoke rubber strap itself with its steel segments and less than conservative design is a matter of taste, but I happen to like it a lot.

The Diagono X-Pro has a rotating bezel that requires a small press to be rotated. The bi-directional rotating bezel is in printed steel and has markers for the GMT hand. The dial has another scale for the GMT hand, so the bezel can be used to track a third time zone. My absolutely favorite part of the Diagono X-Pro is Bulgari’s decision to use a piece of black-colored sapphire crystal for the actual dial material. I’ve not seen Bulgari do this since, which means that it was probably a technical headache to achieve. The result, however, is one of the most legible, crisp, and neat-looking sport watch dials ever made, in my personal opinion. 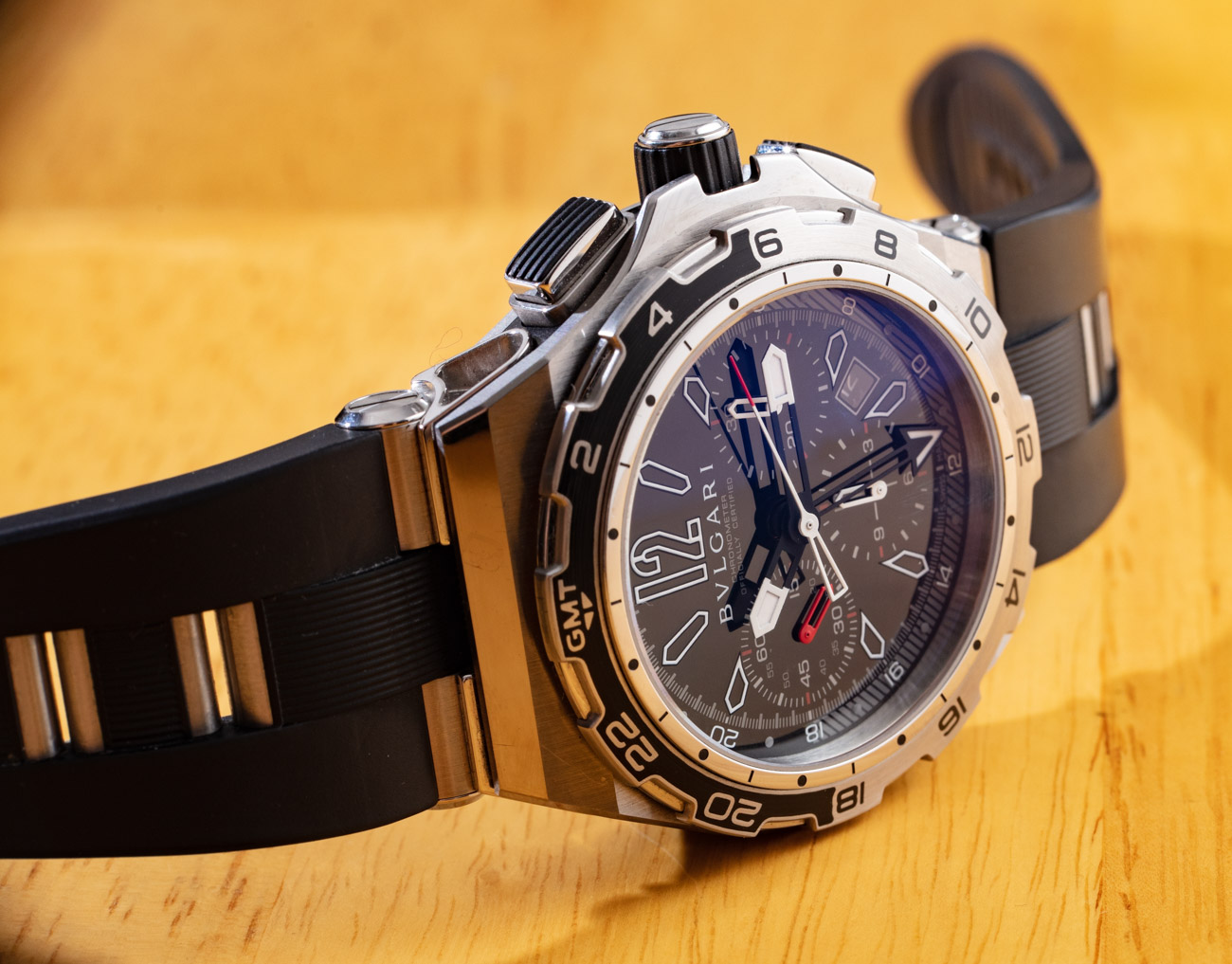 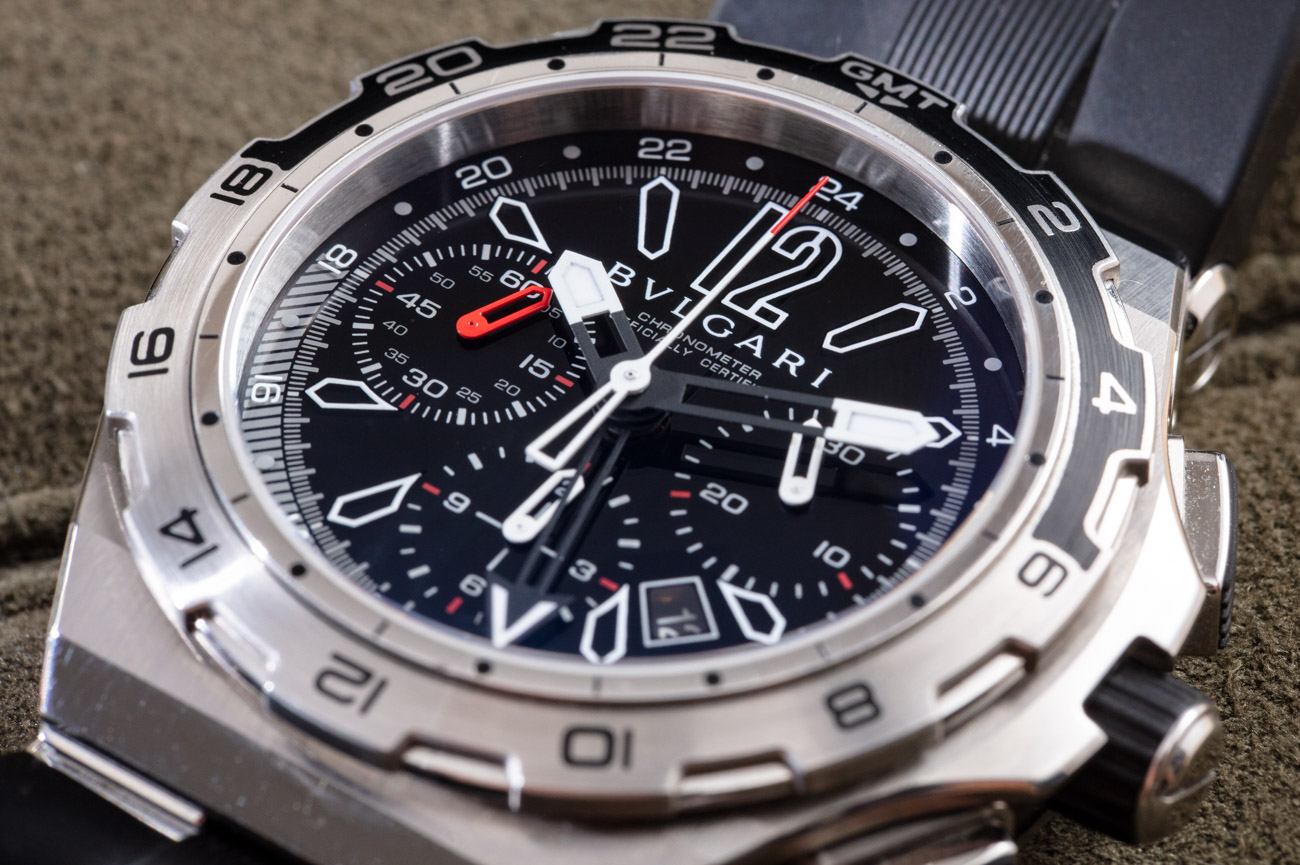 The black sapphire dial is fitted with applied, stencil-style hour markers that work very well with the bold hands. The watch dial has the time, a 12-hour chronograph, a GMT hand, and window for the date. Bulgari manages to include all this in a way that does not feel overly cluttered, and that also lends itself to very good readability of all elements of the dial. From a style and utility standpoint, Bulgari really got it right here. If you recall, I mentioned that there was one limited-edition version of the Diagono X-Pro. This was launched just a bit after the standard X-Pro was released and was created for a watch collector community on the then-popular PuristsPro membership forum website. If I recall correctly, the only difference in the watch was that the dial markers, instead of being printed in white, were printed in an attractive light blue color.

Topping the dial of the Diagono X-Pro is an AR-coated, curved sapphire crystal that suffers from very little glare. Inside the X-Pro is an amazing movement known as the Bulgari caliber BVL 312. Bulgari prefers to use its own entirely in-house movements these days, so I don’t think the BVL 312 is used that much anymore, but probably because of the cost to produce it. Bulgari said that the BVL 312 is based on the Swiss Made ETA Valjoux 7750 automatic chronograph. This is, of course, true, but what isn’t apparent is just how much the 7750 has been thoroughly modified. It would be like saying that Robocop is based on a human. Yes, that is true, but after all the parts that have been replaced, Robocop looks like something entirely different. 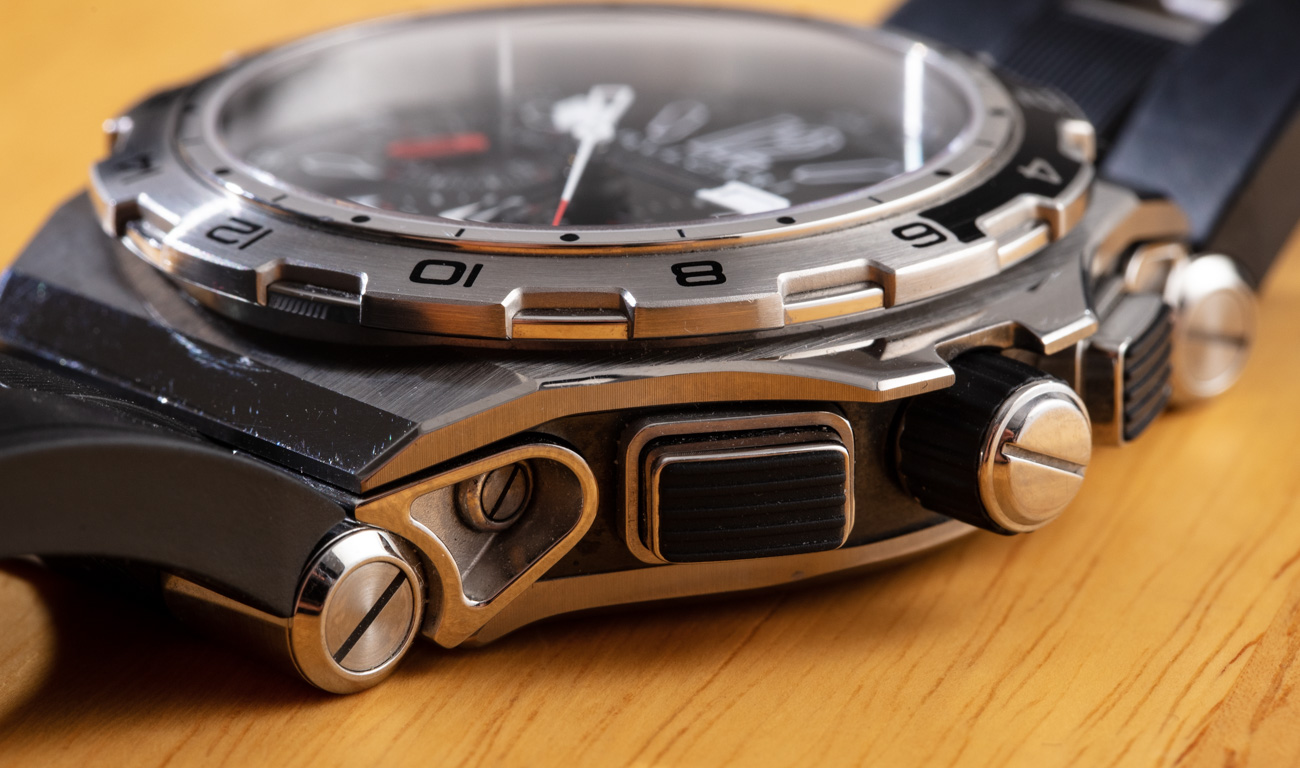 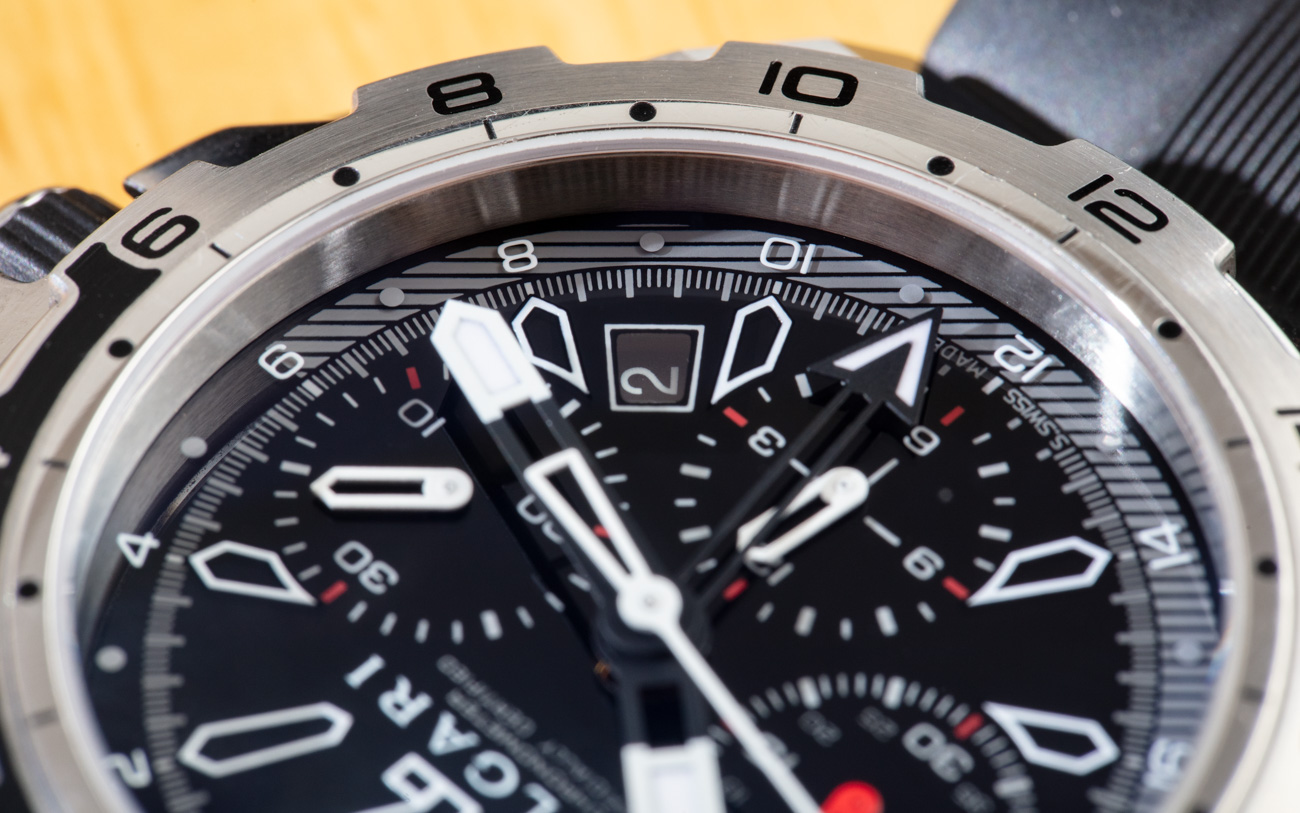 First of all, when viewing the BVL 312 through the rear sapphire crystal, you don’t see anything that looks a like a 7750 to most eyes. First is the entirely bespoke automatic rotor produced from tungsten (for weight) and riding on ceramic ball bearings (for winding efficiency). The chronograph itself was entirely reworked to include a column wheel transmission system, and the layout of the chronograph is different from the stock 7750. The movement has also been fitted with a GMT hand, which is not part of the stock 7750’s functionality. I’ve seen countless modded 7750 movements out there, especially those with added GMT hands. I’ve never seen one quite as detailed and well executed as the BVL 312 — which really takes a workhorse mechanical movement and turns it into something more beautiful and luxurious (as well as a better-performing movement).

The movement still operates at 4Hz with with 48 hours of power reserve. The delicate detailing and polishing on the movement are the final touches that make for a beautiful view through the rear of the watch. Bulgari made it clear at the time that many of the parts in the BVL 312 are given hand-polishing, which is not the case on standard 7750 movements, by any means. Finally, to impress upon people the performance of the BVL 312 movement, each of them was given a COSC Chronometer certification. 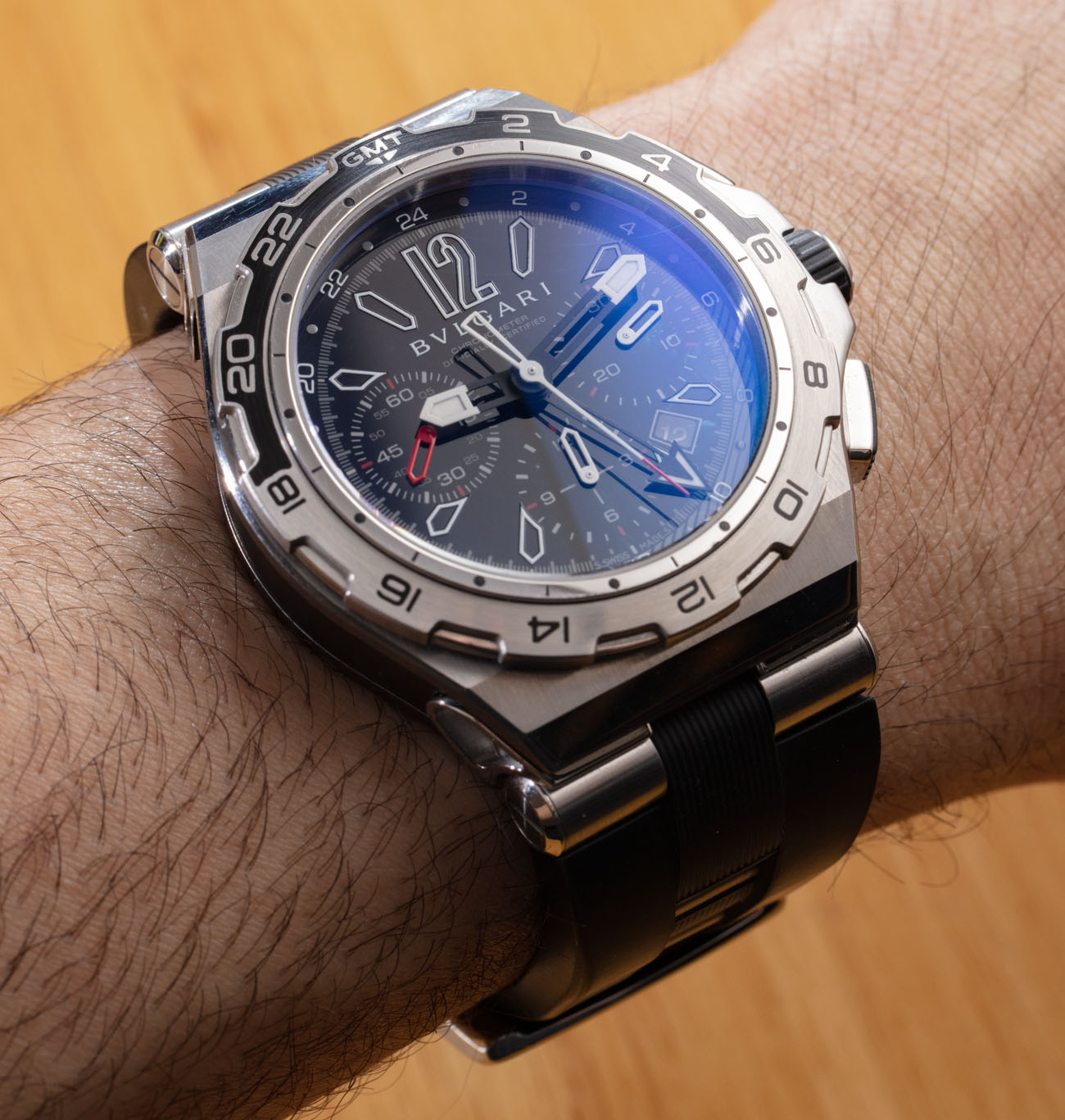 While not a design or size for everyone, the Bulgari Diagono X-Pro is a very “me” type of watch, as I value high attention to detail, lots of over-engineering, and also a degree of obscurity. For me the Diagono X-Pro is an amazing piece of Buglari’s recently history and just feels great to wear — especially as most hardcore watch-lovers don’t even know what it is. I think it has aged very well and doesn’t feel too dated, being a decade old at this point. There are usually just a handful of these available at any given time (you can see what’s currently available on eBay here), and I believe the original retail price for the Bulgari Diagono X-Pro watch was $18,500 USD. Learn more at the BVLGARI website here. 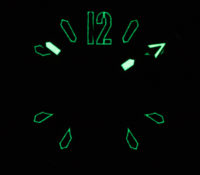 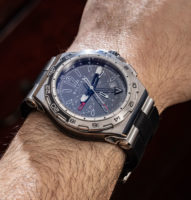 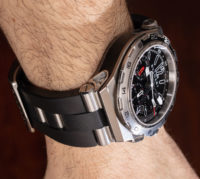 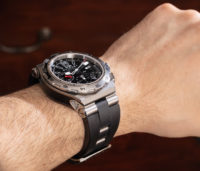 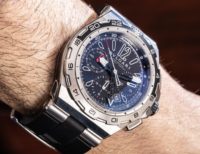 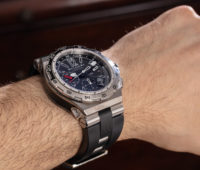 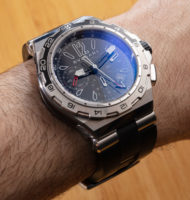 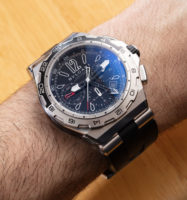 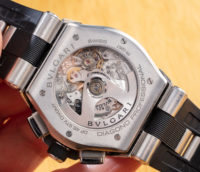 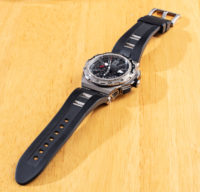 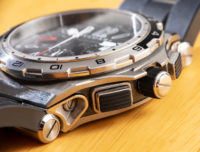 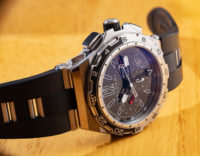 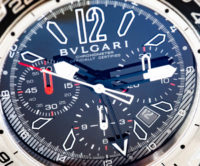