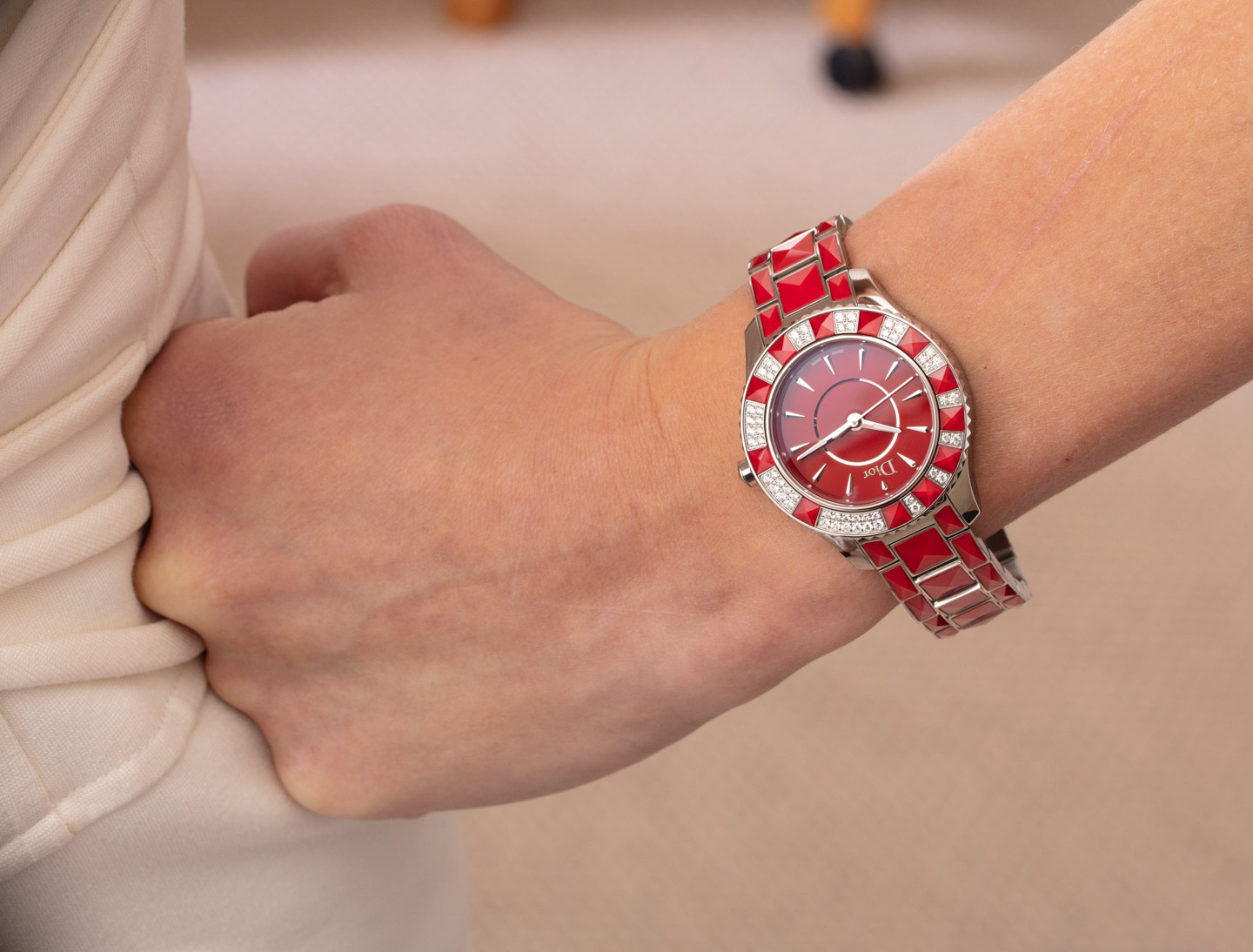 French luxury goods company Dior is among Paris’ most well-respected fashion establishments. Founded by Christian Dior in the mid-20th-century, Dior is among the prestigious brands owned by the LVMH luxury conglomerate. Companies like Dior, Chaumet, and Louis Vuitton each produce timepieces, but unlike other “watchmaker specialist brands” owned by LVMH, these companies do not emphasize their watches as much as many of the other product categories they are strong in. For this reason, Dior watches are not as heavily known as its clothing, bags, shoes, and makeup, but the brand has some interesting timepieces. Today on aBlogtoWatch, for our No Longer Made series, I look at one of the many pieces from the Dior Christal collection. This particular model happens to be the reference CD143114M001 and features steel, diamonds, and red ceramic. This No Longer Made installment is sponsored and made possible by ShopWorn.com, a premium retailer of no-longer-made wristwatches and other name-brand accessories at unbeatable prices. 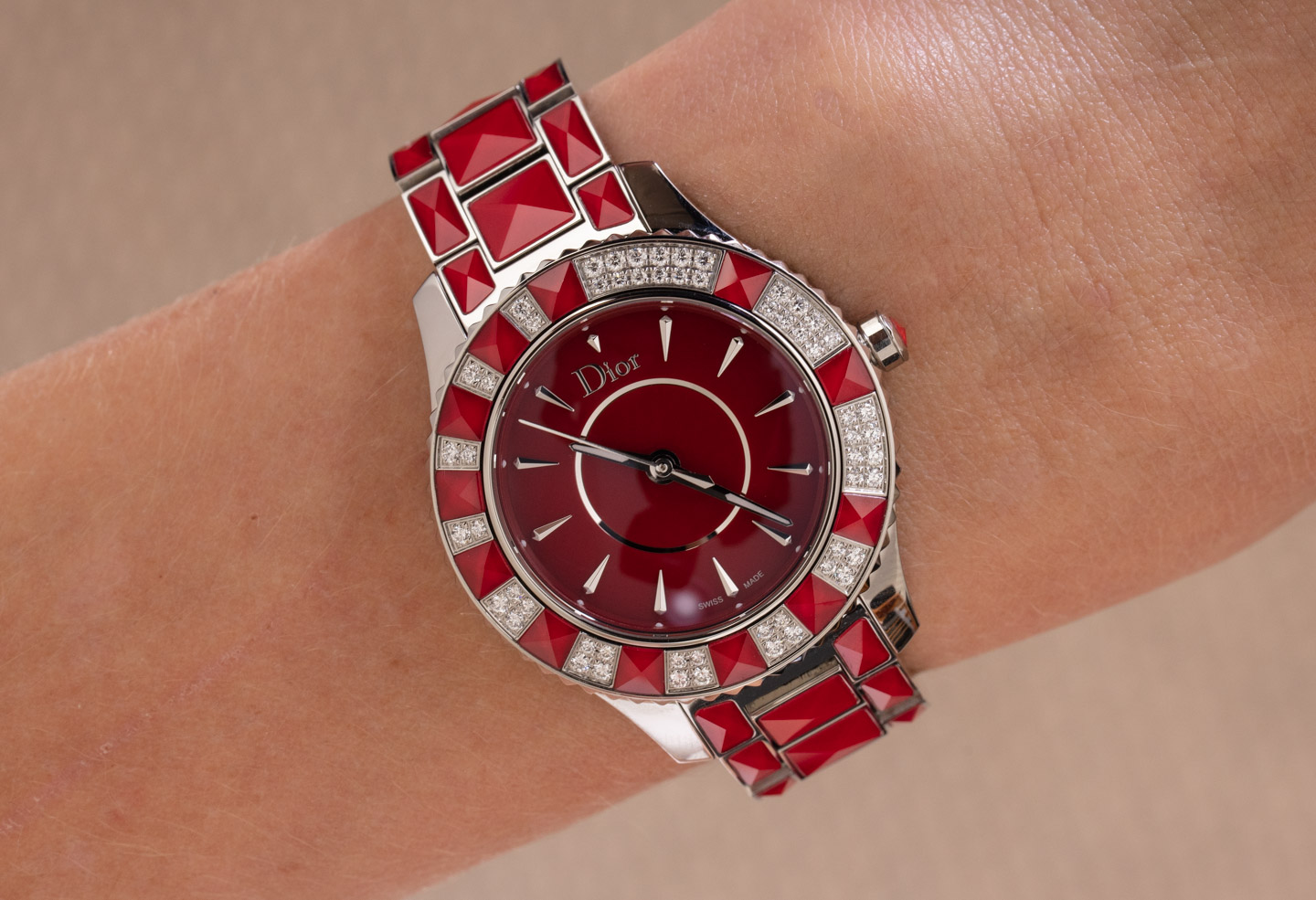 When I think of French crystal, I think of brands such as Lalique and Baccarat that make beautiful “tabletop” decorations. It makes sense that the heritage of luxury crystal objects — ranging from lamps to drinkware — would eventually be captured in timepiece form. Dior interestingly produced an extremely prolific range of watches in the Christal collection before recently retiring the family. It is actually quite impressive to see the dozens and dozens of variations Dior made to the Christal and Dior VIII product collections.

During their production, the Dior Christal watches had more success in the Eastern part of the world. While Dior has lots of strengths in all markets (mostly among women) its timepieces were rarely promoted in places like the U.S. and, as a result, never captured the demand that also-Paris-based luxury brand competitors Chanel and Cartier (for example) have with many Western female audiences. 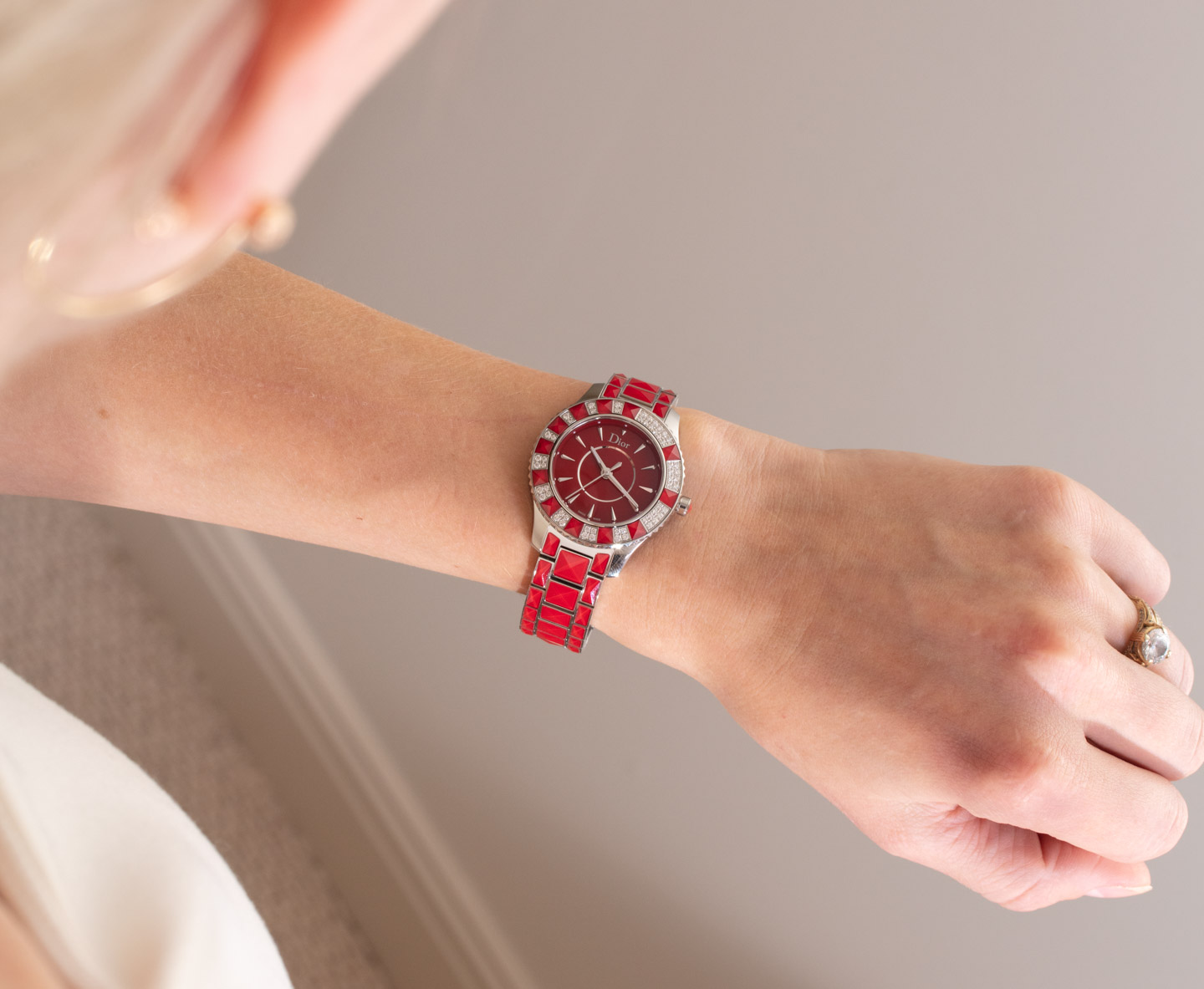 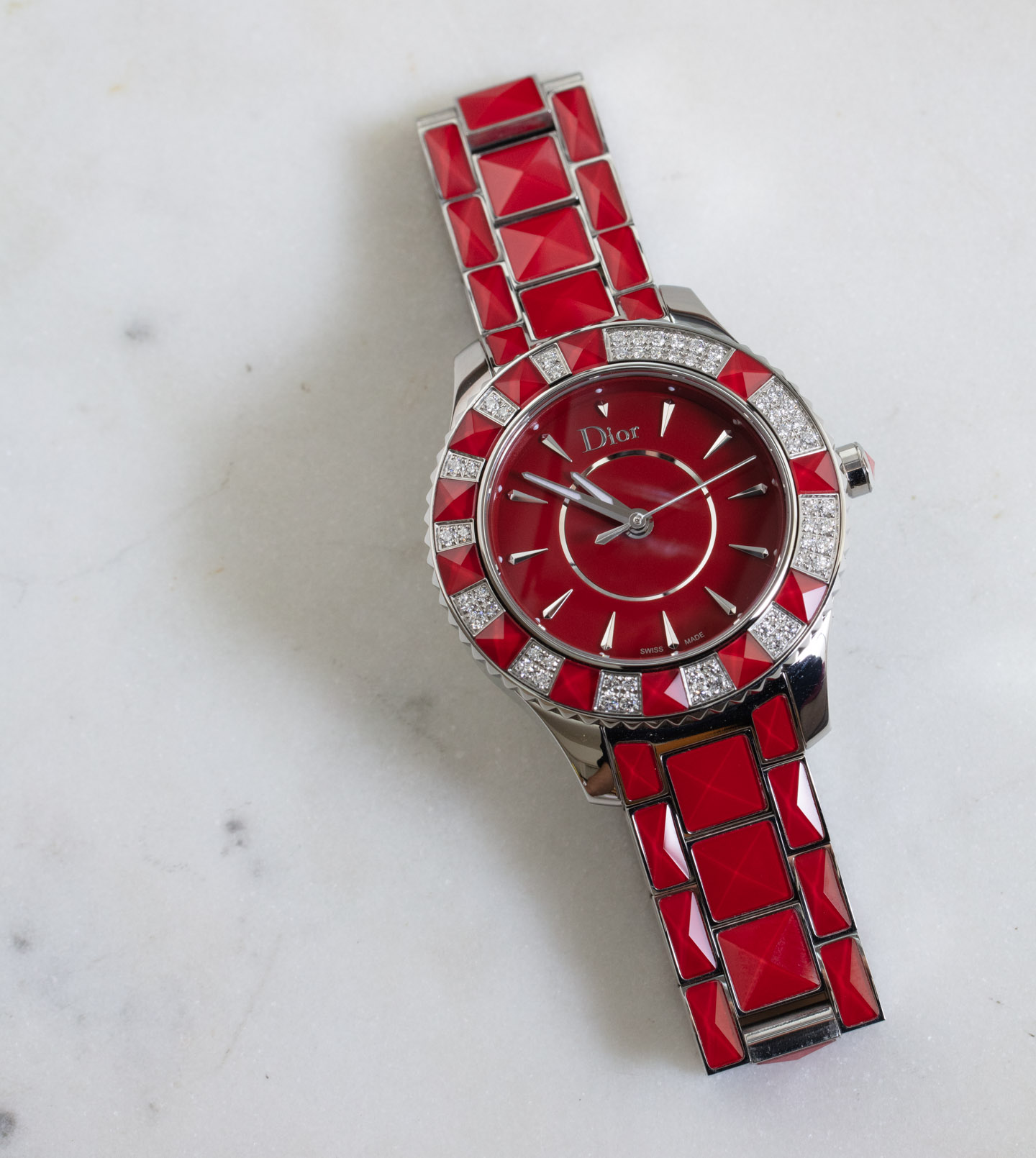 This was probably because Dior was being a bit too heady with the design and theme of the product. The result was both serious and playful at the same time, which required a particularly confident woman to pull off. Let me explain this from a marketing perspective. A youthful-minded consumer would gravitate (if they wanted a French product) to Chanel. One with a more mature and sensible outlook would often gravitate toward Cartier. Rolex (not French of course, but popular) would receive the bulk of attention from other luxury consumers seeking a status-symbol watch. The remaining market for conservative French luxury watches that were nevertheless playful was relatively small. These Dior Christal watches were born in a time when it was often enough to have eye-catching objects in lush retail environments. Since then, a brand wishing to capture demand from newer consumers must capture a consumer’s heart before they ever enter a store.

The one design element connecting all Christal and Dior VIII watches is the “Clos du Paris” (small pyramids) style bracelet and often bezel design. Christal watches combined a steel case with inset pieces of facet-cut synthetic sapphire. This is the same material used for the sapphire crystal over the dial, but colored (easily doable for sapphires) red and also cut in a more jewelry-style. Dior experimented with this bracelet design in this form (metal and sapphire crystal), as well as in all-metal, and all ceramic. 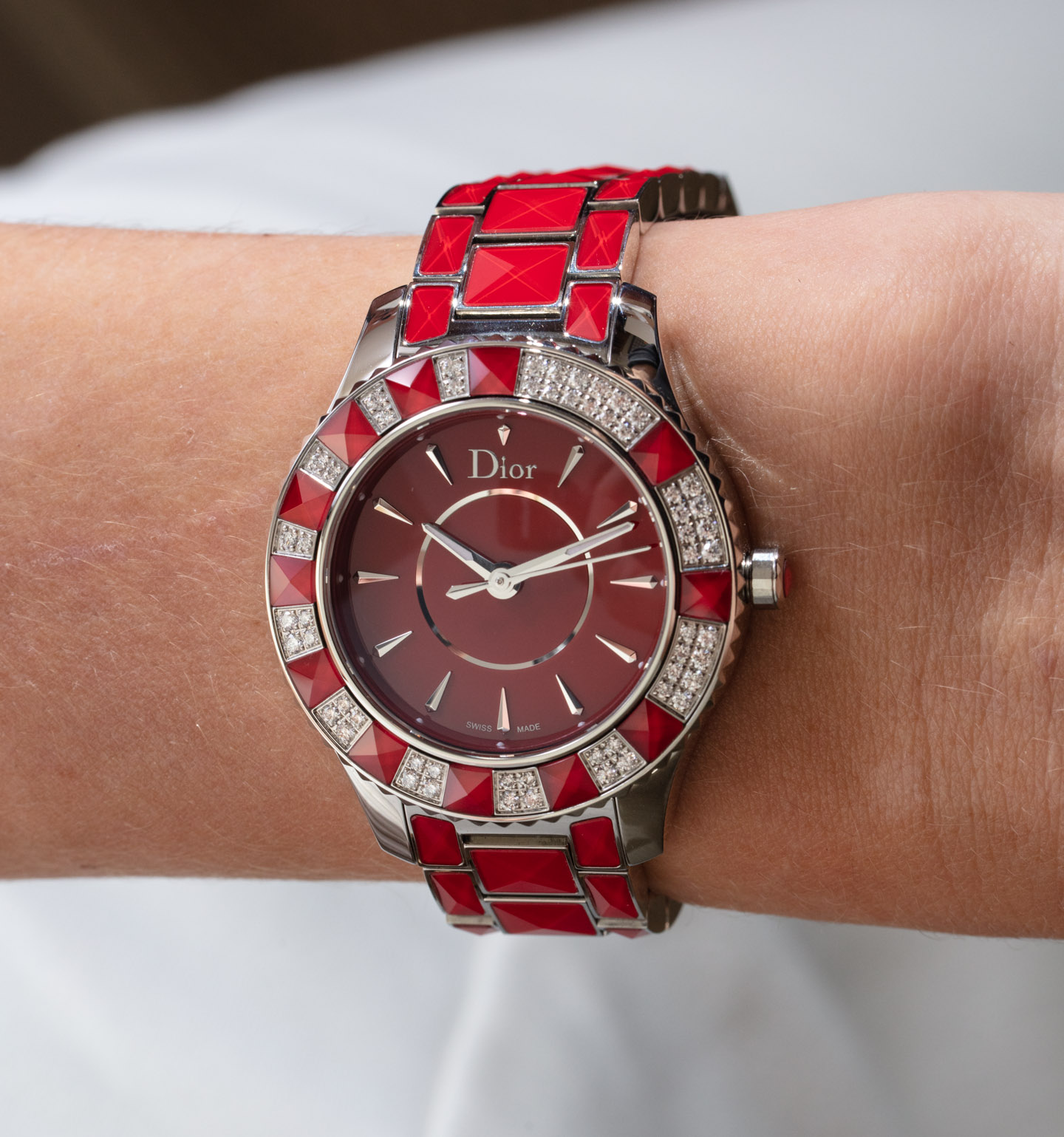 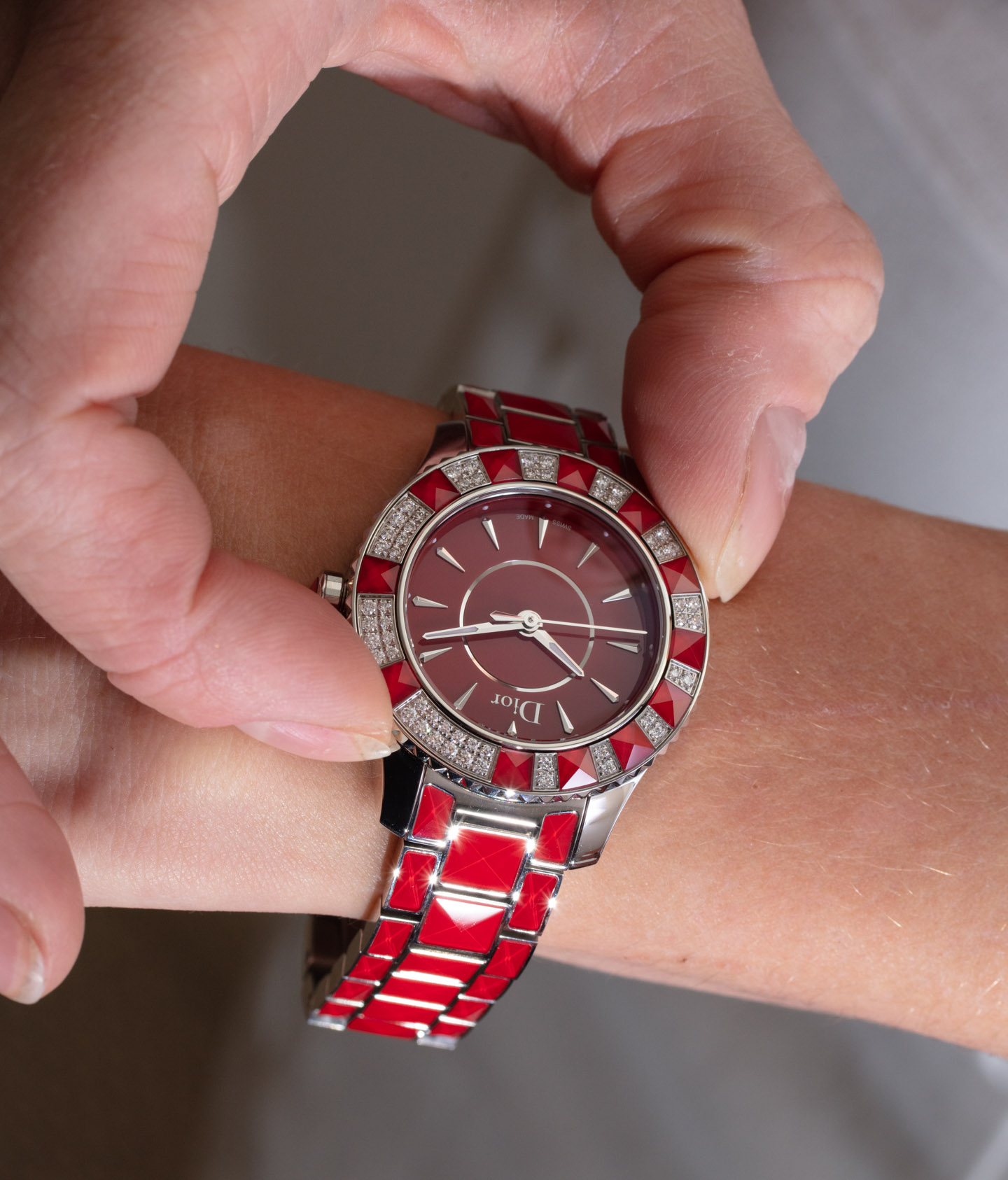 Underneath the jewelry exterior is a sort of sports watch complete with unidirectional rotating bezel. Dior seems to start with a classic sports watch, renders it in women’s proportions, and then gives it a sort of futuristic jewelry style. I have to say (in a positive way) that the Dior Christal and VIII watches are some of the most avant-garde and wild women’s watch designs produced from a mainstream luxury brand in recent years. I don’t think Dior got enough acknowledgement for what it was trying to do here. This was specifically a rejection of the “classic codes” that seem to dominate the personality of most women’s luxury watches in the sub $10,000 range.

In addition to red, the Dior Christal came in a few other colors — probably the most unpredictable of which is purple. There was also a more conservative black version, as well as blue. This Christal Red was produced both as a Swiss Made quartz movement timepiece and a virtually identical model with a Swiss Made automatic movement. Really the only difference between the two was the term “Automatic” on the dial. 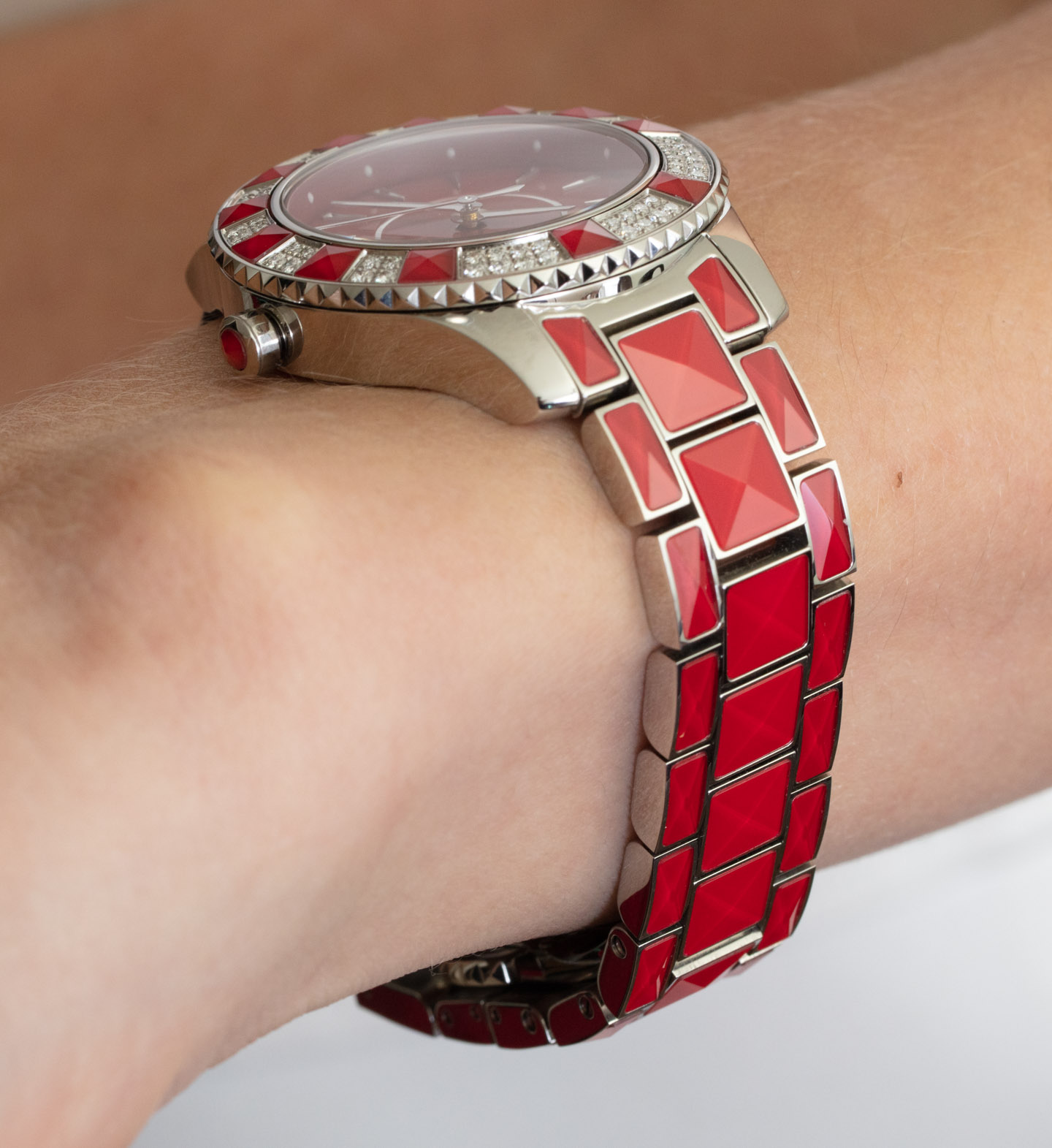 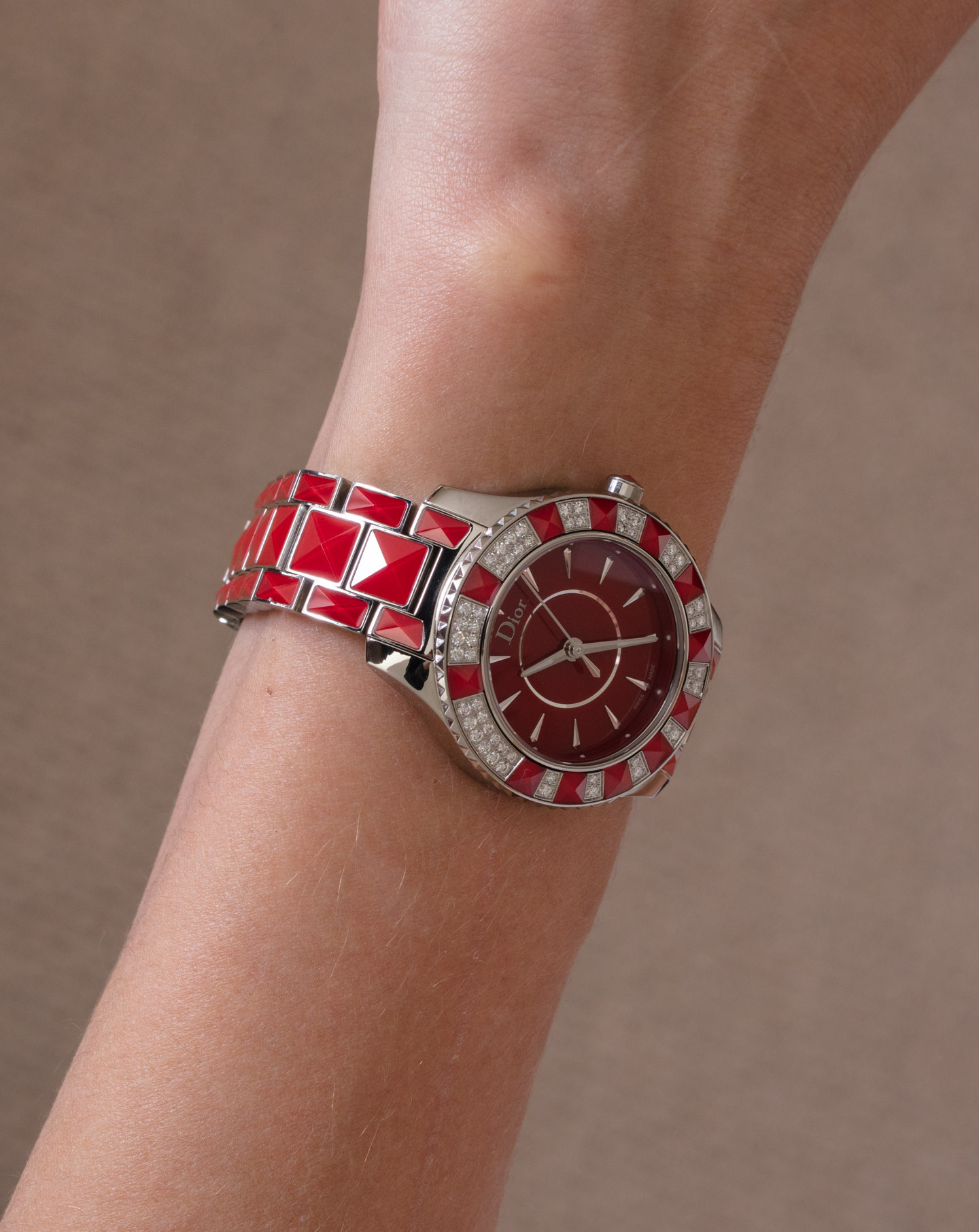 Water resistant to 50 meters, the polished steel case is 33mm-wide (41mm lug-to-lug distance and 10.5mm-thick) and visually wears bit on the larger size given the many rings presented on the dial and bezel. The bezel pattern of set sapphire crystals and round-cut diamonds roughly follow the look of a timing bezel on a traditional diver’s watch with the first 20 minutes being specially emphasized. Likewise, this has been turned into a jewelry aesthetic in the way only a Parisian luxury brand could do.

The steel and sapphire Dior Christal watches represent some of the brand’s early attempts at this design theme, meaning that ceramic only entered the equation later. I believe Dior replaced the “Christal” name with sometime else since the watches were no longer about featuring crystal in the watch, but rather a material like ceramic. What persisted was the unique “3D pyramid” style on the bracelet and bezel. Sapphire crystal is the most expensive to make and cut as compared to the other materials used in this product family, which is why I think the Christal models are among the most interesting of the bunch. 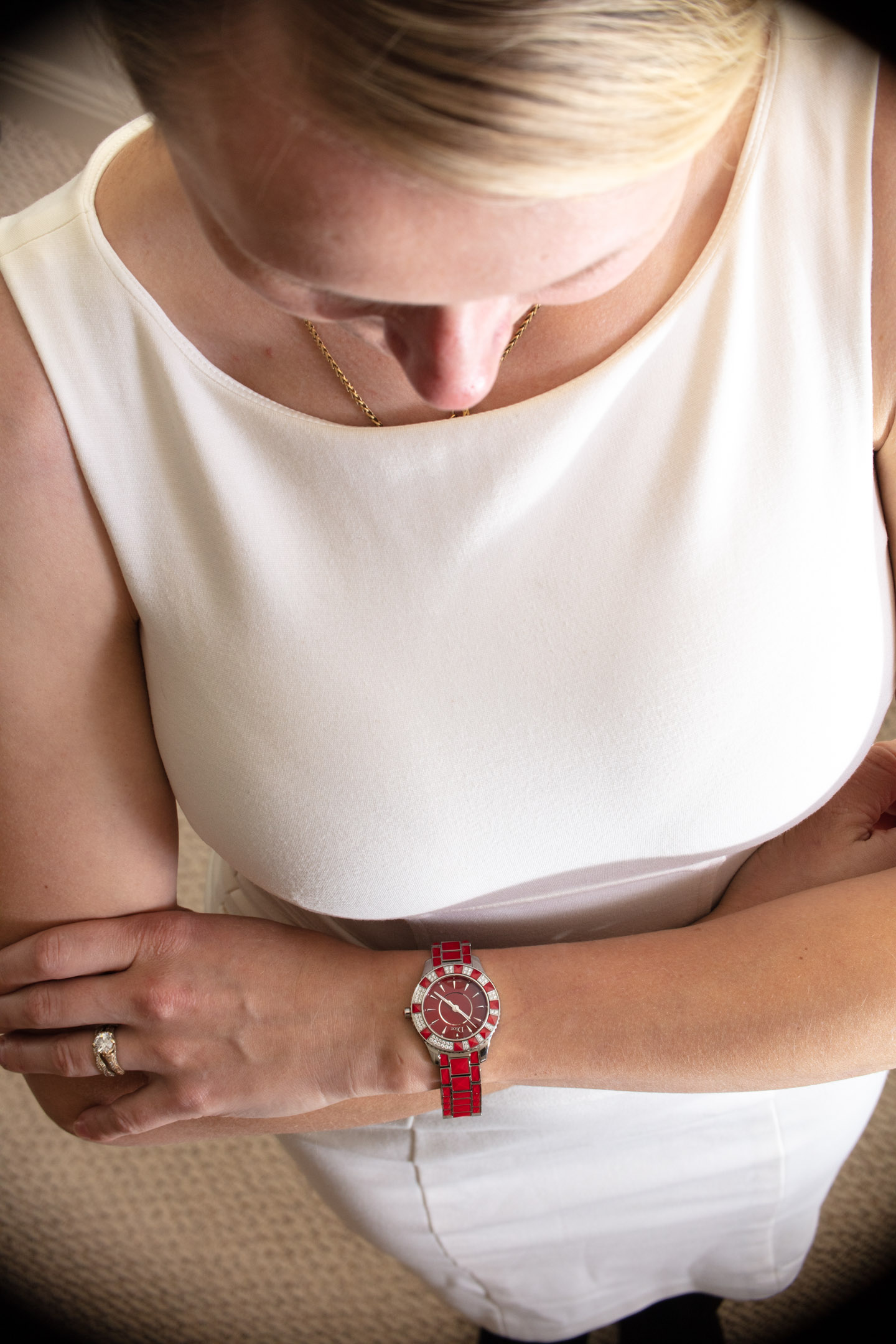 The bezel doesn’t have much of a functional purpose to it but is meant for fun and has the same appealing tactile sensation one receives when rotating the bezel on a diver’s watch when turned. The dial is legible, though Dior did choose to pair a slightly glossy red lacquer dial with polished hands and hour markers. I think anyone keen on this collection should search the Internet for examples of the other ways in which Dior played with this dial design. Some of them got truly wild (mother-of-pearl French fan anyone?)

What should interest wearers (or buyers for the wearers) of the Dior Christal watches is how affordable they are as of right now. While the Christal collection is no longer made, available new old stock, or lightly pre-owned watches are relatively available at prices well-under retail. Not that you’ll find a Dior watch at rock-bottom price, but knowing how much these timepieces originally retailed for makes a lot of the deals out there feel like welcome bargains. I think from a wearer’s perspective, much of the appeal comes from having a finely made product by one of Paris’ still most-demanded names but with a look that doesn’t immediately feel like it was peeled off a Champs-Elysees billboard from the 1960s. 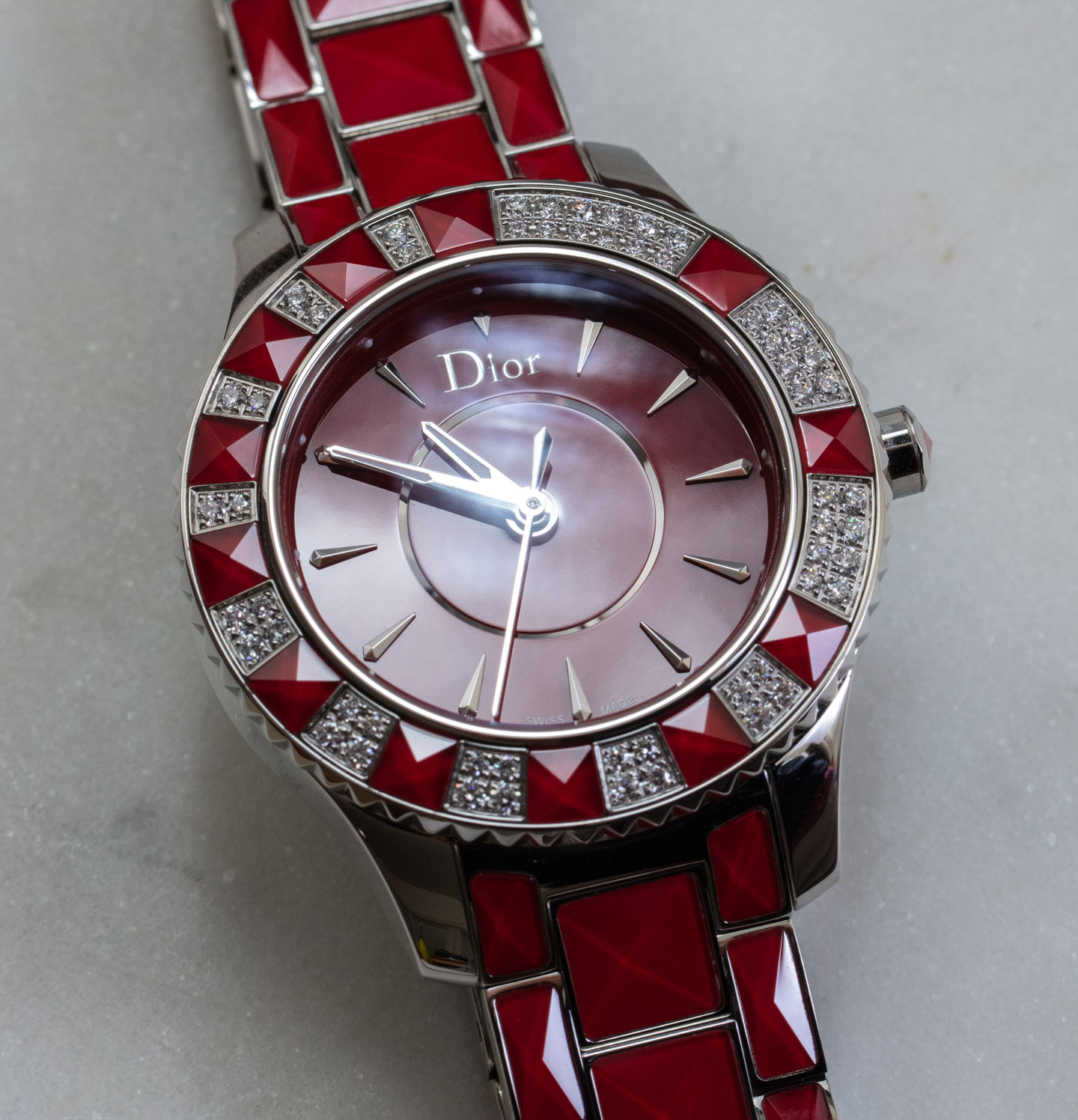 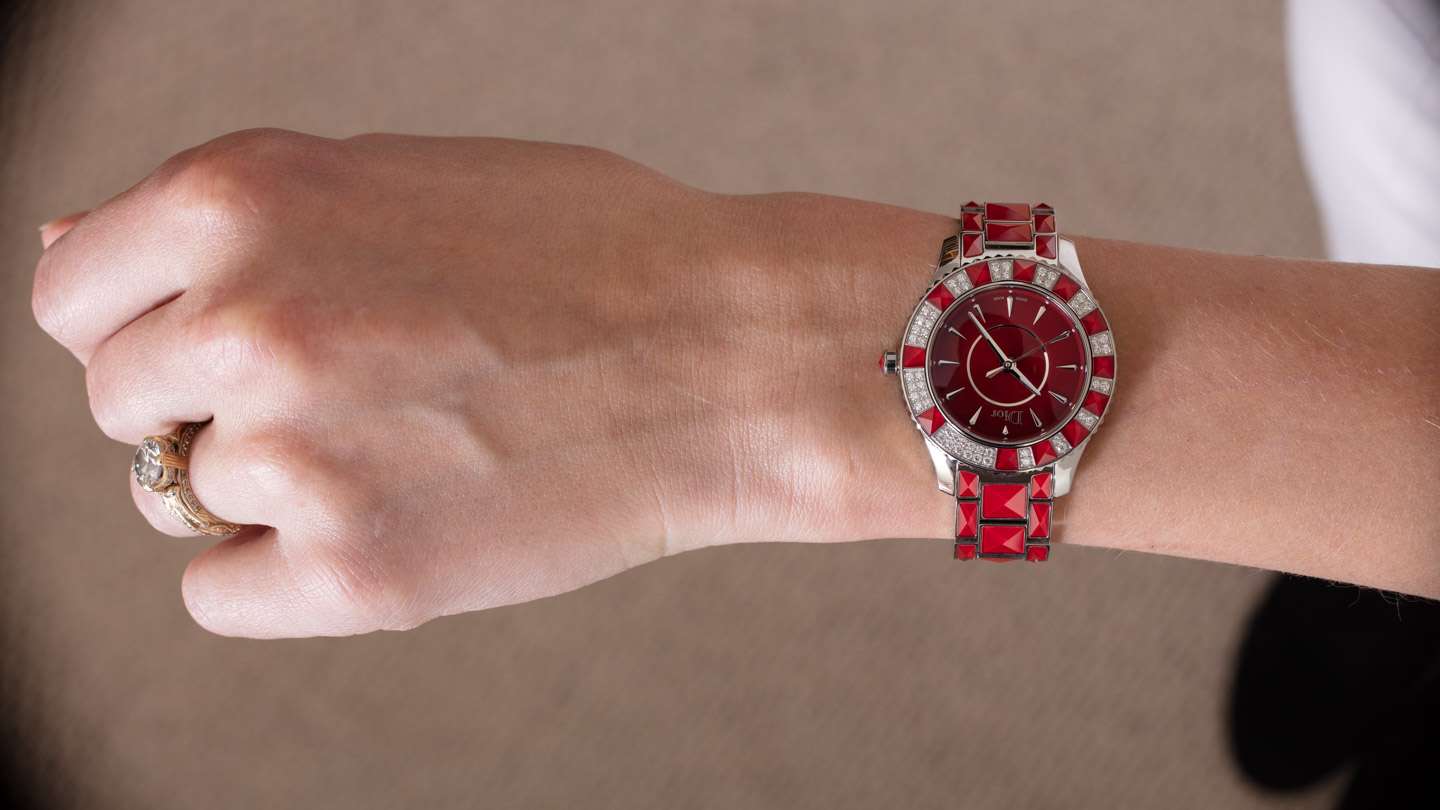 Original retail price for this Dior Christal Quartz Red reference CD143114M001 watch was $8,250 USD. You can see it and more Dior watches available at an average discount of about 70% off, at the ShopWorn.com website here.