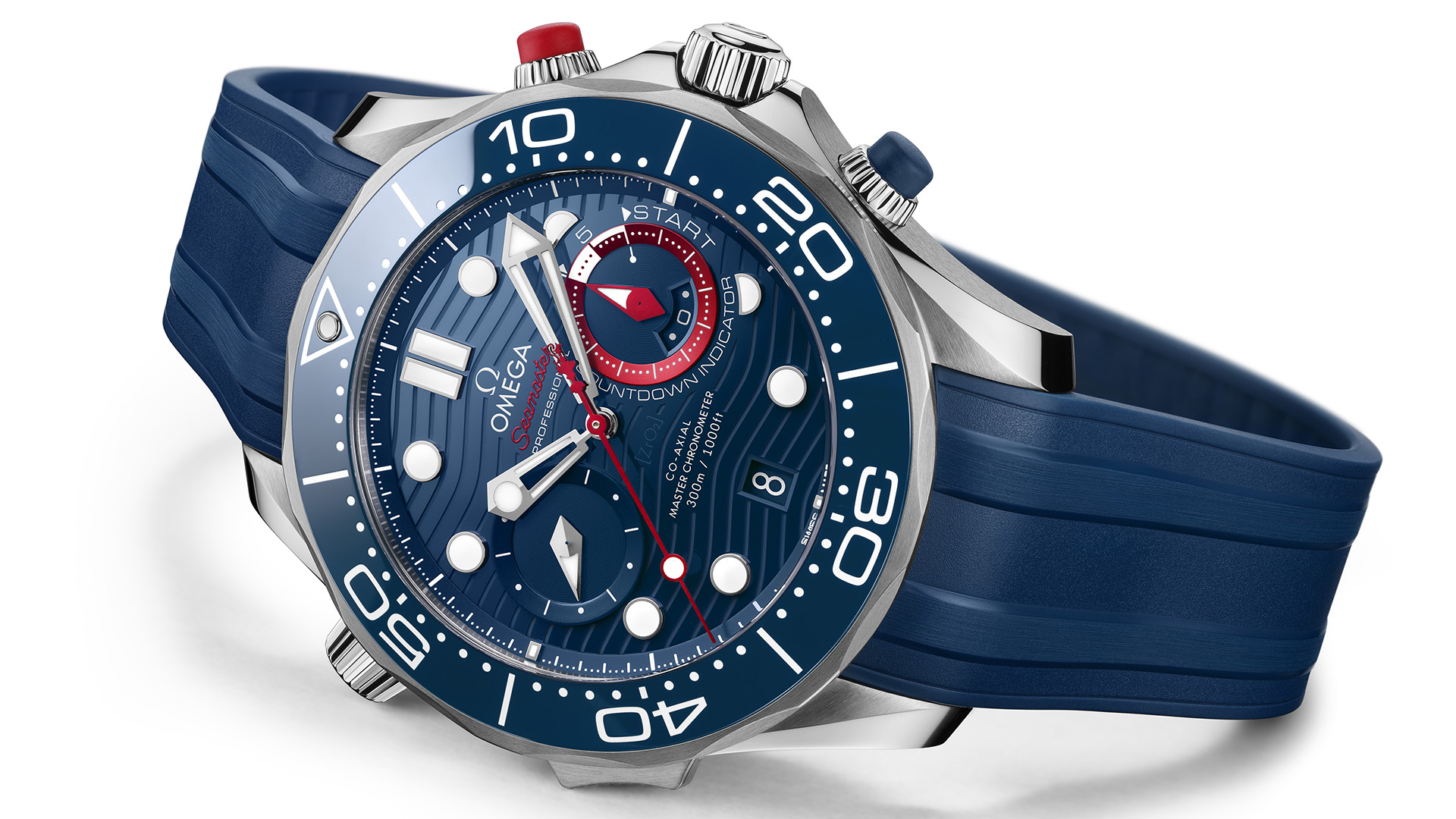 March 6 to March 21, 2021 marks the 36th running of the prestigious America’s Cup yacht race, set to be hosted in the waters around Auckland, New Zealand. Since 1851, the race has stood as the pinnacle of the sport, with challengers from around the world fighting for years for a chance to qualify. While the event itself is one of the oldest continuously run international sporting events, Omega has a long America’s cup history of its own, with a legacy of limited edition Seamaster and Speedmaster models produced for both competing teams and the event itself since 1995. As the new event draws near, the brand has produced a special variant of its Seamaster Diver 300M Chronograph to celebrate (although this is the second model the brand has produced to commemorate the 36th America’s Cup). More than just celebrating the prestigious race, the special edition Omega Seamaster Diver 300M America’s Cup Chronograph introduces several unique features to the Seamaster line that may point the way forward for the series. 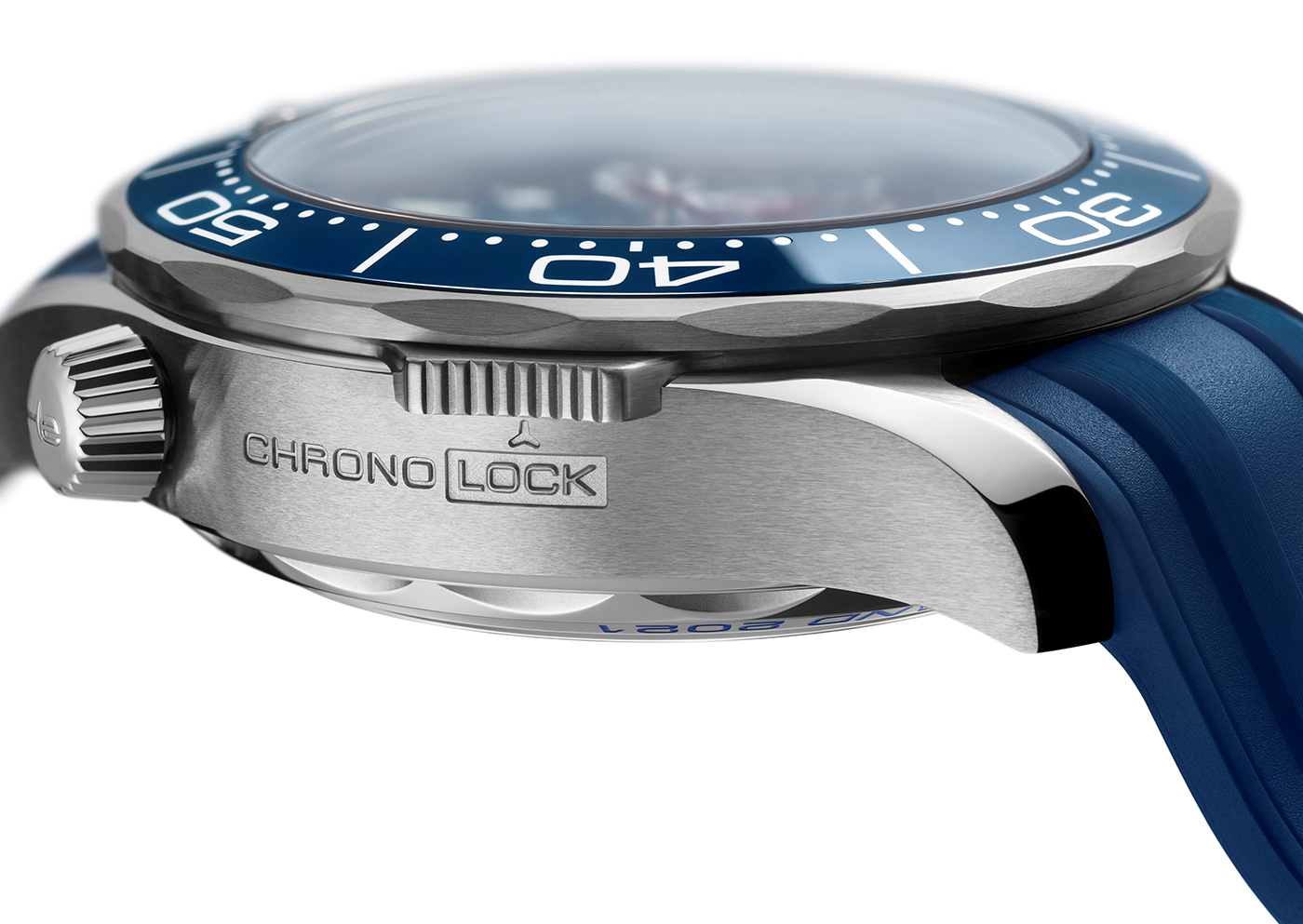 The 44mm stainless steel case of the Omega Seamaster Diver 300M America’s Cup Chronograph follows the usual Seamaster form with its trademark twisted lyre lugs, 10 o’clock conical manual helium escape valve, and scalloped dive bezel with ceramic insert. At 8 o’clock however, the brand introduces its new Chrono Lock system. By sliding this curving rectangular toggle, wearers can lock the chronograph pushers in place, preventing accidental activation in the midst of a heated race. Likewise, the chronograph pushers themselves are redesigned with yacht racing in mind, adding a soft rubberized coating to maximize grip in wet conditions. These pushers also add a vibrant splash of color to the mix, finished in the America’s Cup signature colors of red and blue. This mismatched set may be a divisive point for some enthusiasts, but the two tone treatment sets it apart from other models in the line at a glance. Around back, the sapphire display caseback features a commemorative “36th America’s Cup Auckland 2021” engraving filled with blue lacquer. Like the rest of the Seamaster Diver 300M line, this case offers a robust 300 meters of water resistance. 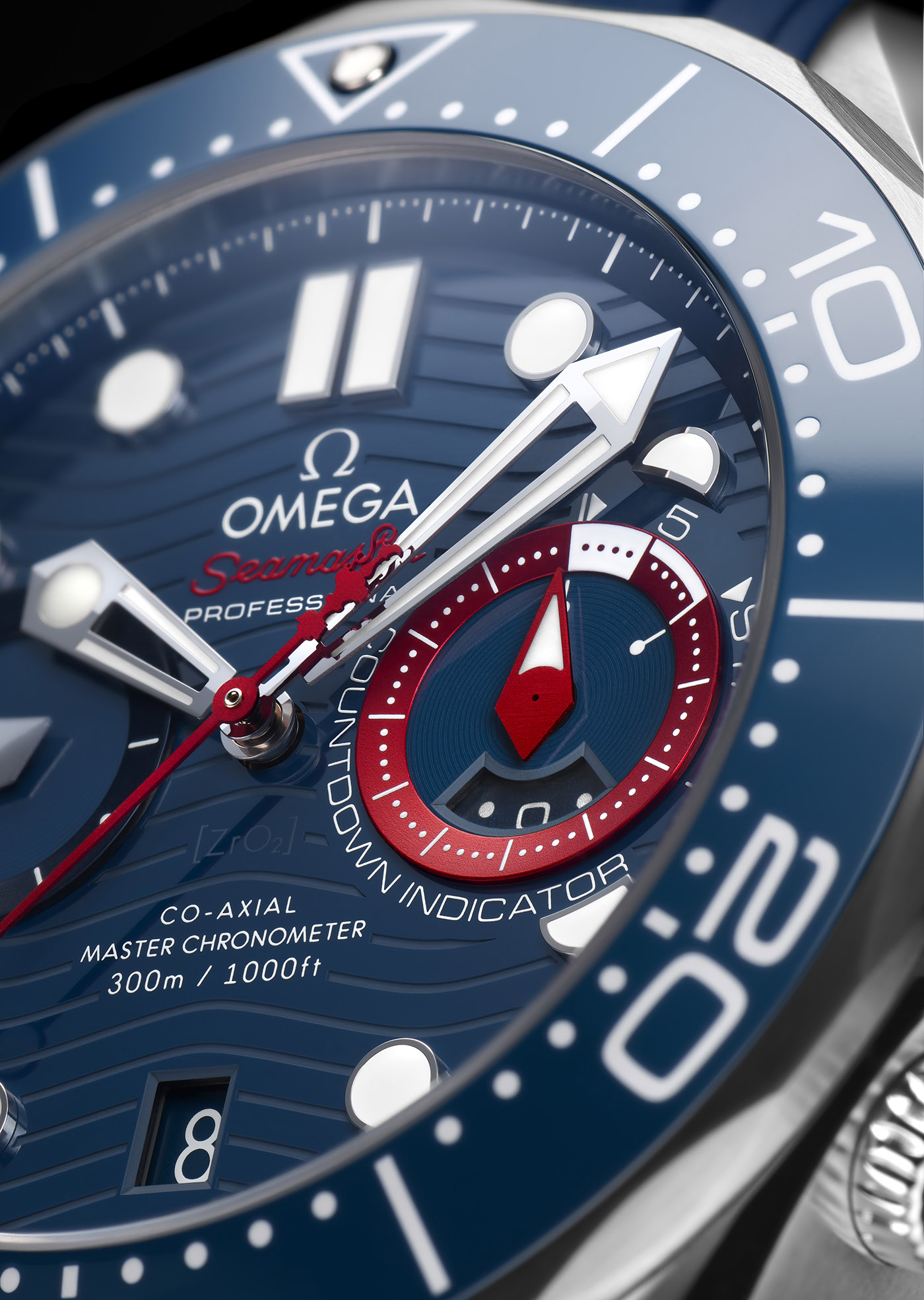 While the basic Seamaster chronograph elements are present here, the dial of the Omega Seamaster Diver 300M America’s Cup Chronograph brings substantial changes to the formula. Beyond the standard laser engraved blue ceramic wave pattern dial and iconic skeleton sword handset, the dial is almost entirely new. The central chronograph seconds hand is rendered in deep red anodized aluminum, with an ornate counterweight in the shape of the America’s Cup trophy. The subdial hands have also been redesigned with an extremely wide dauphine shape that Omega claims is inspired by yacht hulls. Perhaps the most extensively redesigned element is the stacked chronograph hours and minutes register at 3 o’clock. To account for the wider minutes hand, the hours display has been moved to a wheel with a cutout window, while the red anodized outer ring displays a regatta timer countdown scale. It’s a dramatic visual shift for a movement shared with a watch as different as the Omega Speedmaster Racing, but the redesign gives a clear and concise readout with a distinctive new look. 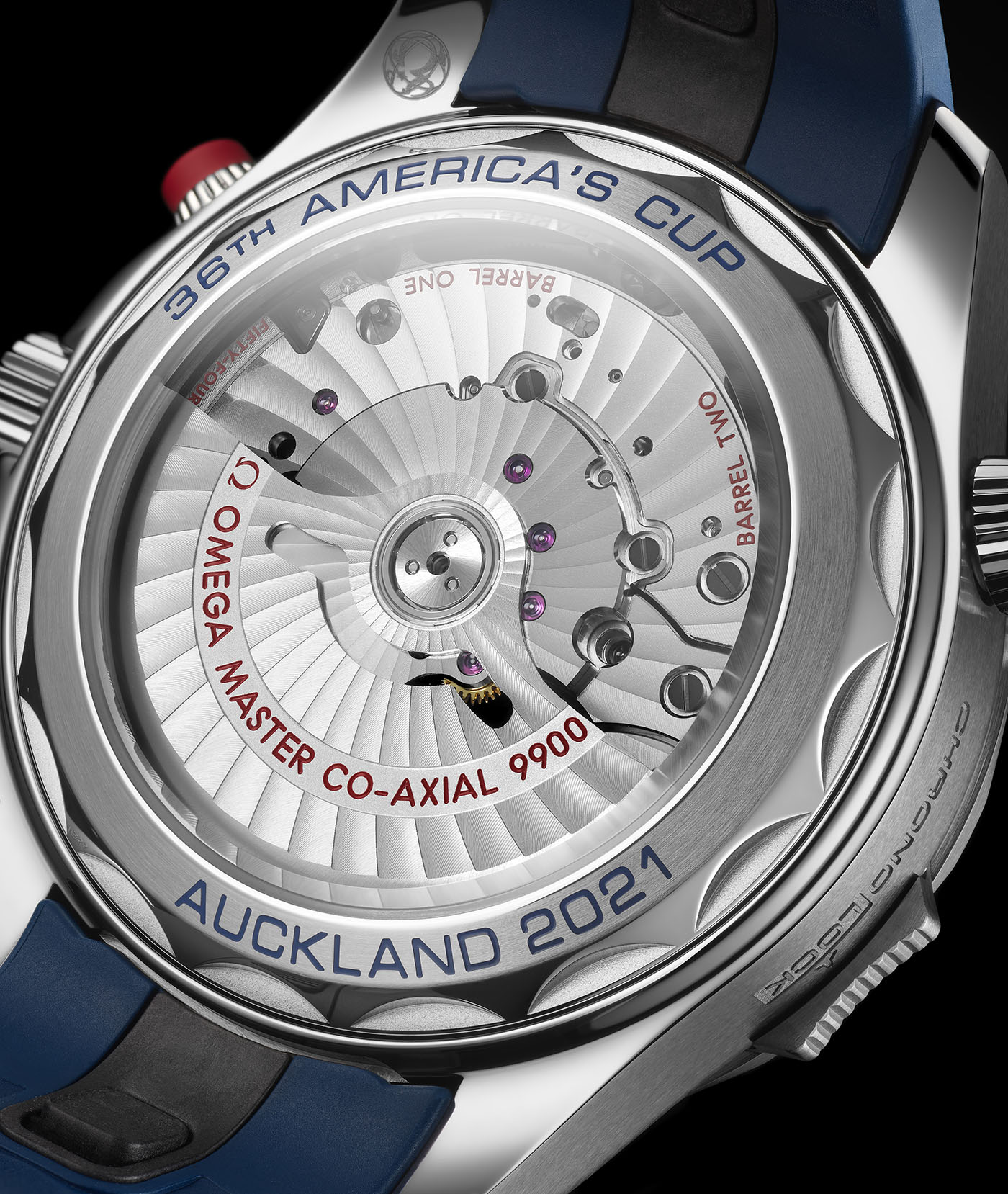 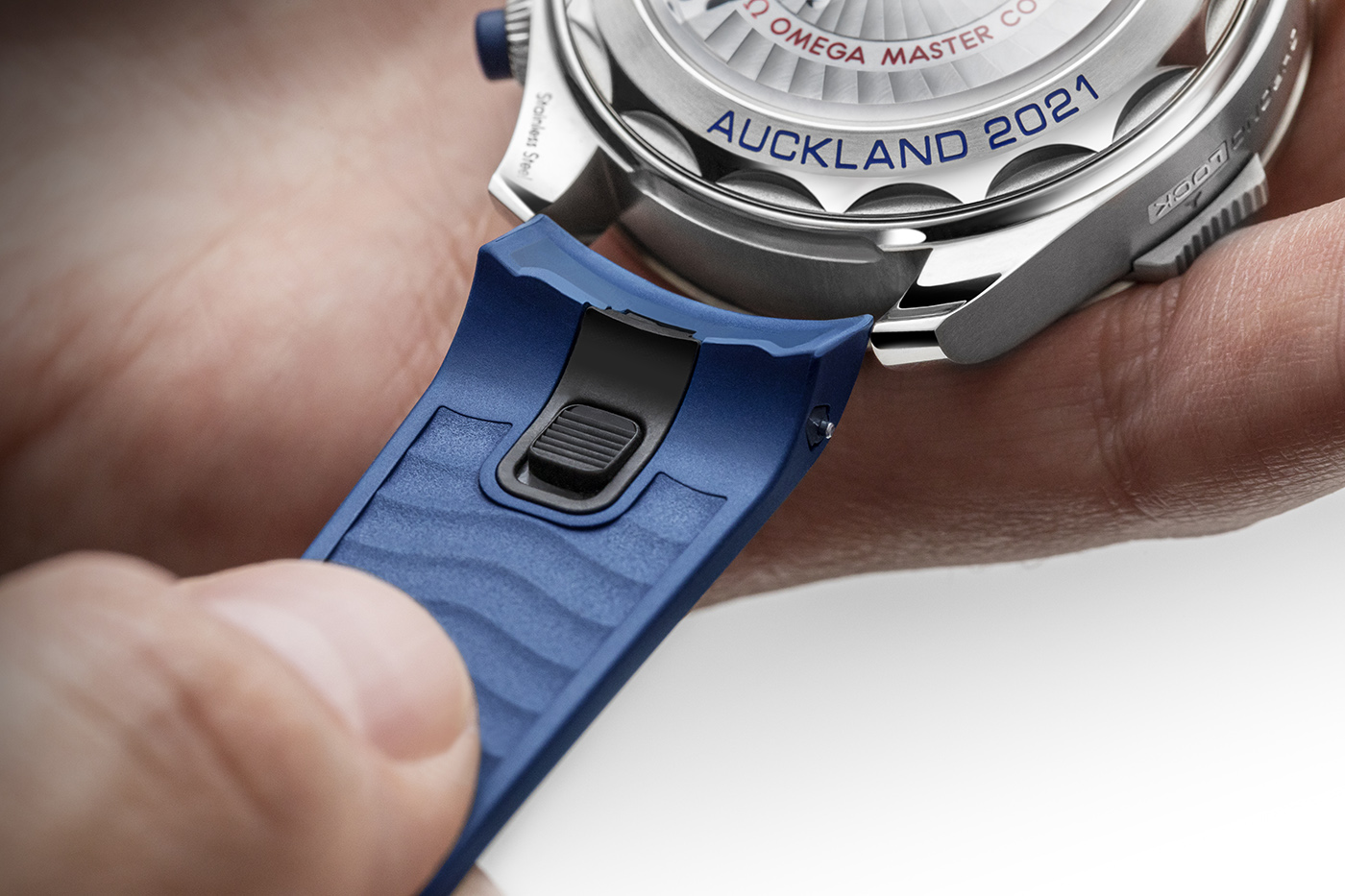 Omega’s last major debut with the Seamaster Diver 300M America’s Cup Chronograph is its new Quick Change strap changing system. The watch comes paired with both the signature five link Seamaster bracelet and a striped rubber strap in royal blue, both fitted with a small button on the underside near the lugs. With one press, the spring bars are released, and the strap can be swapped out almost instantly without tools. As quick release straps and bracelets become increasingly common across the industry, this new Quick Change concept is likely to make its way throughout Omega’s lineup soon. 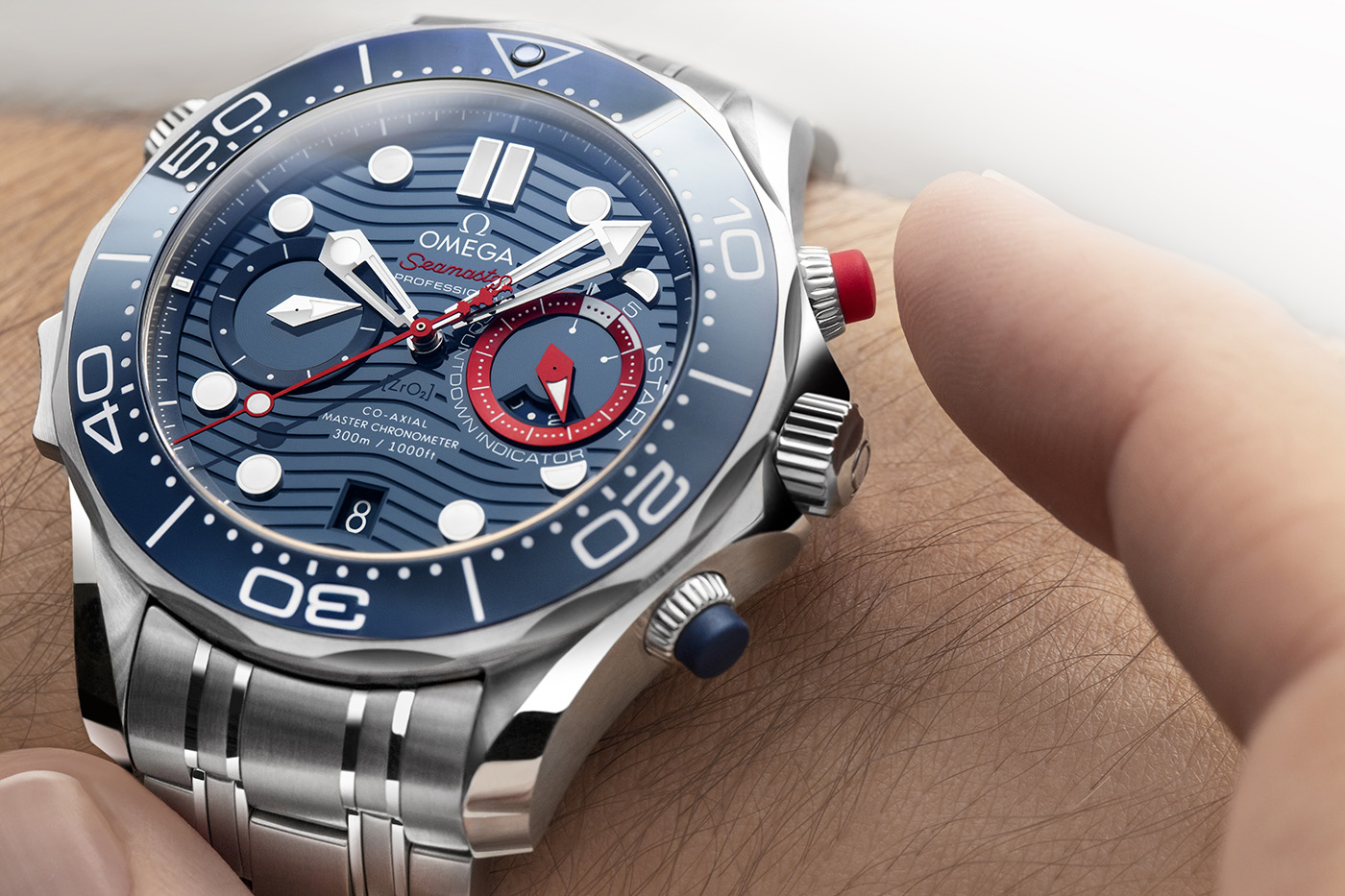