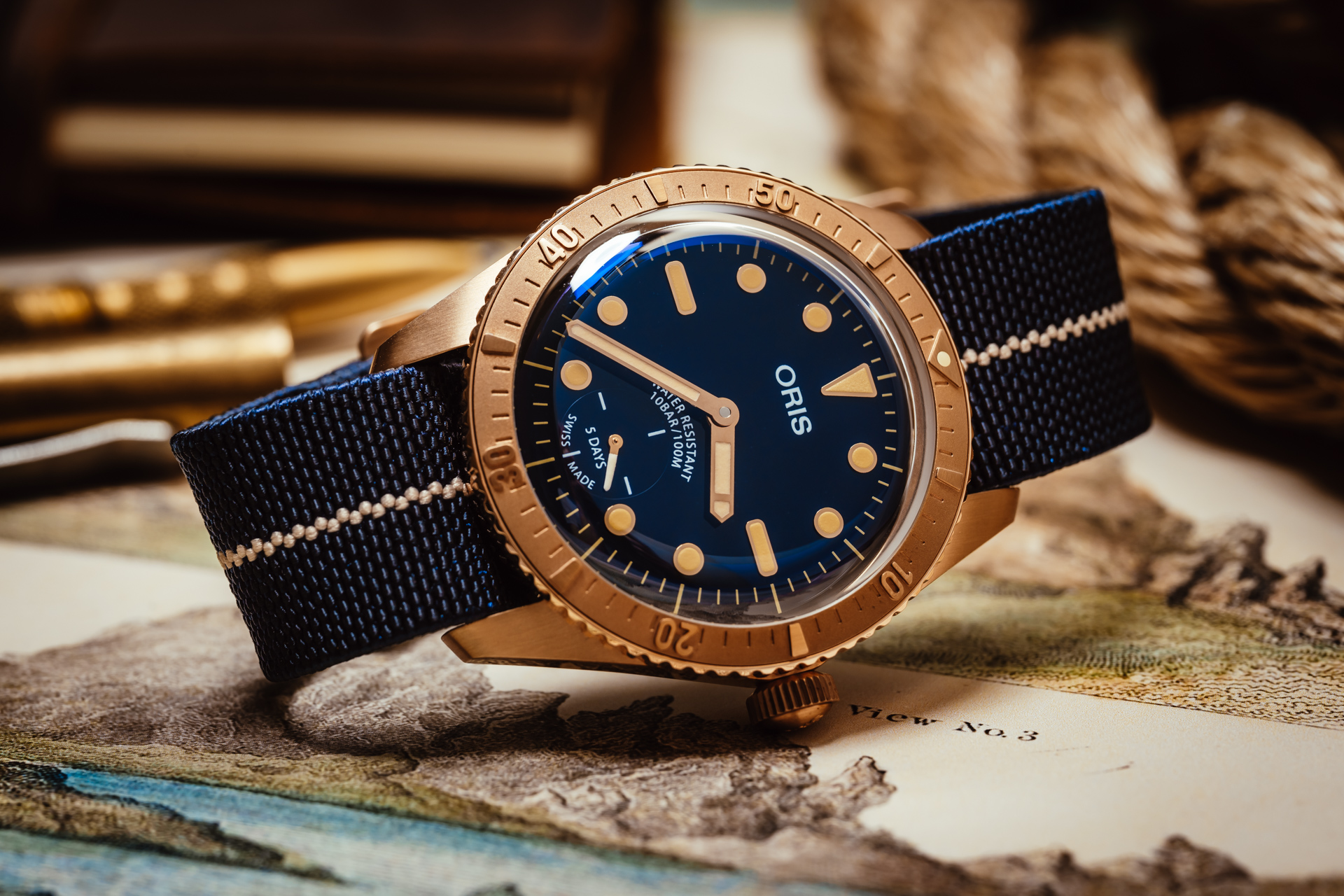 Independent brand Oris is no stranger to paying tribute to historic figures with its limited editions, with special releases over the past few years honoring everyone from jazz legend John Coltrane to baseball great Roberto Clemente. One of the most heroic of Oris’ subjects is decorated U.S. Navy Master Diver Carl Brashear, who since 2016 has inspired two dramatic bronze reimaginings of the vintage inflected Divers Sixty-Five dive watch series. For its third Brashear-inspired model, Oris not only debuts a unique aftermarket strap partnership but also introduces the in-house Calibre 401 small seconds movement for the first time. The Oris Carl Brashear Cal. 401 Limited Edition is a handsomely nautical combination of classic Oris diver elements with new mechanical innovations. 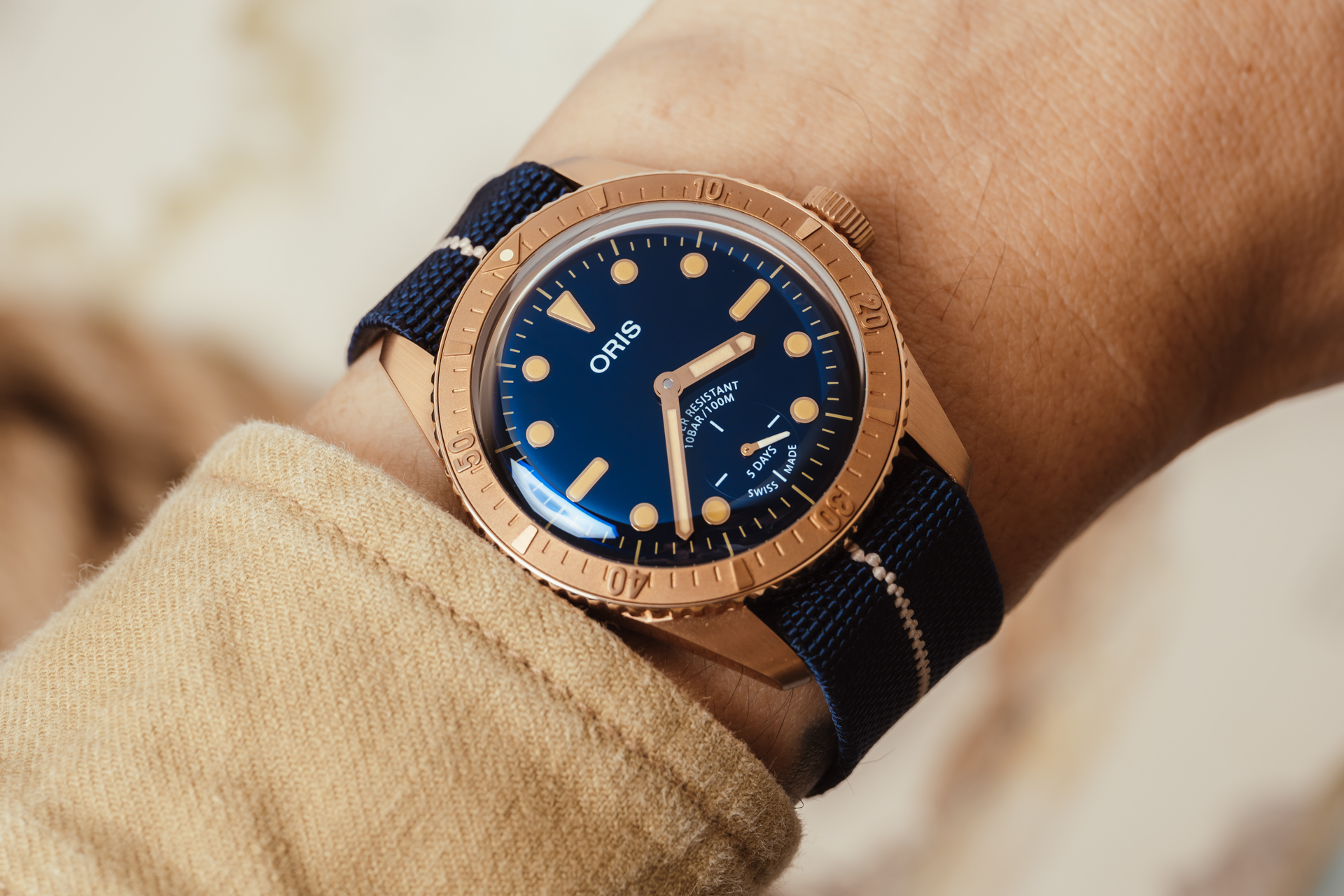 The 40mm bronze case of the Oris Carl Brashear Cal. 401 Limited Edition follows the same clean, midcentury diver form as the standard Divers Sixty-Five, but the warmth of bronze gives this design an added dimension. The brushing along the tops of the slim tapering lugs stands out with a different vibrance, while the solid bronze insert in the narrow dive bezel offers a wealth of visual depth with both raised and engraved segments. For those who are fans of the look of patinated bronze, this layered approach gives a range of surfaces for verdigris to take hold in different shades and thicknesses. Around back, the stainless steel screw-down caseback is ornately embossed with a diving helmet motif, along with Carl Brashear’s famous quote, “It’s not a sin to get knocked down, it’s a sin to stay down.” The rope pattern border surrounding the design is particularly impressive, with a finely detailed woven texture. The Carl Brashear Cal. 401 Limited Edition is likely to carry on the line’s longest-standing point of contention, however, with a somewhat underwhelming 100 meters of water resistance. 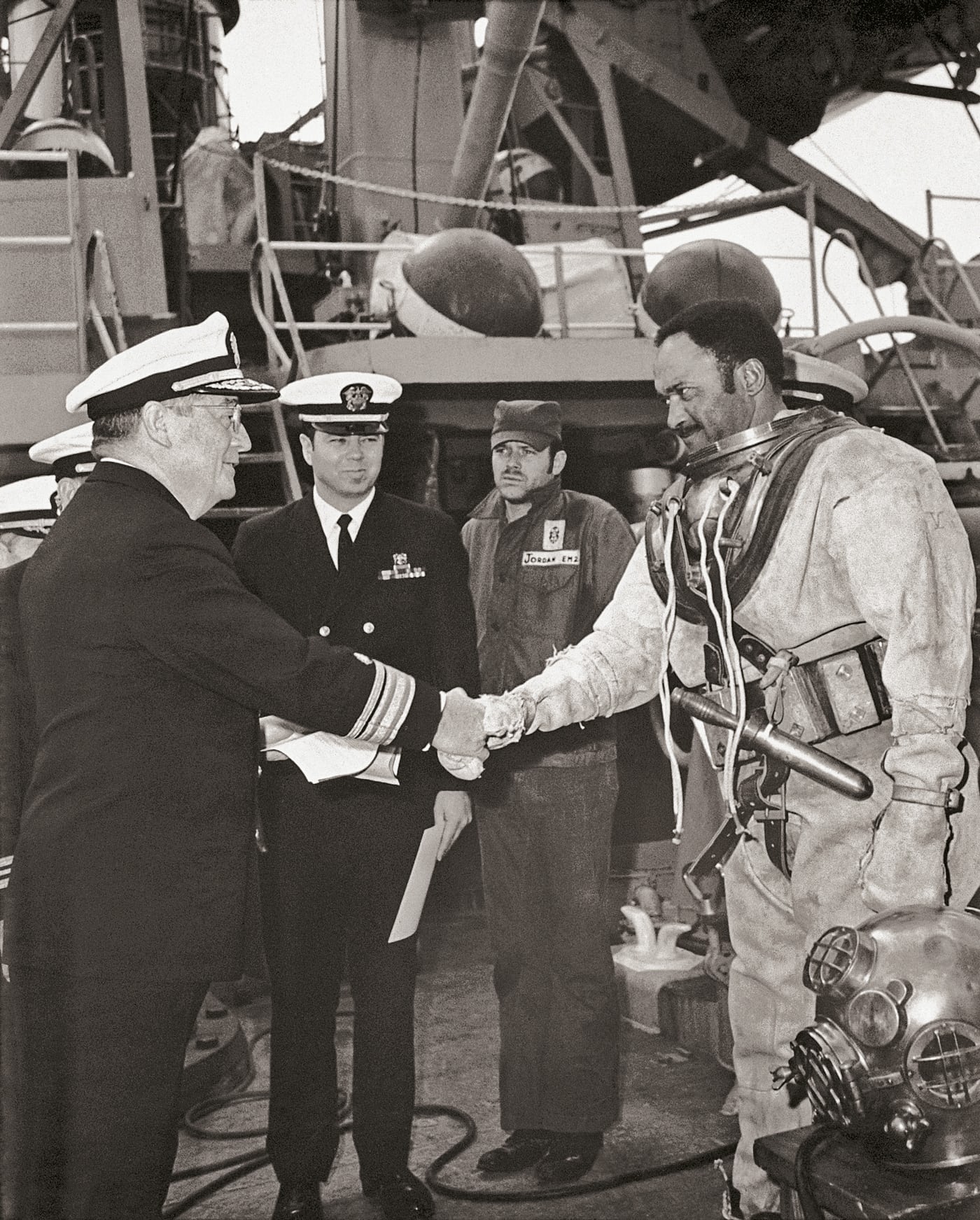 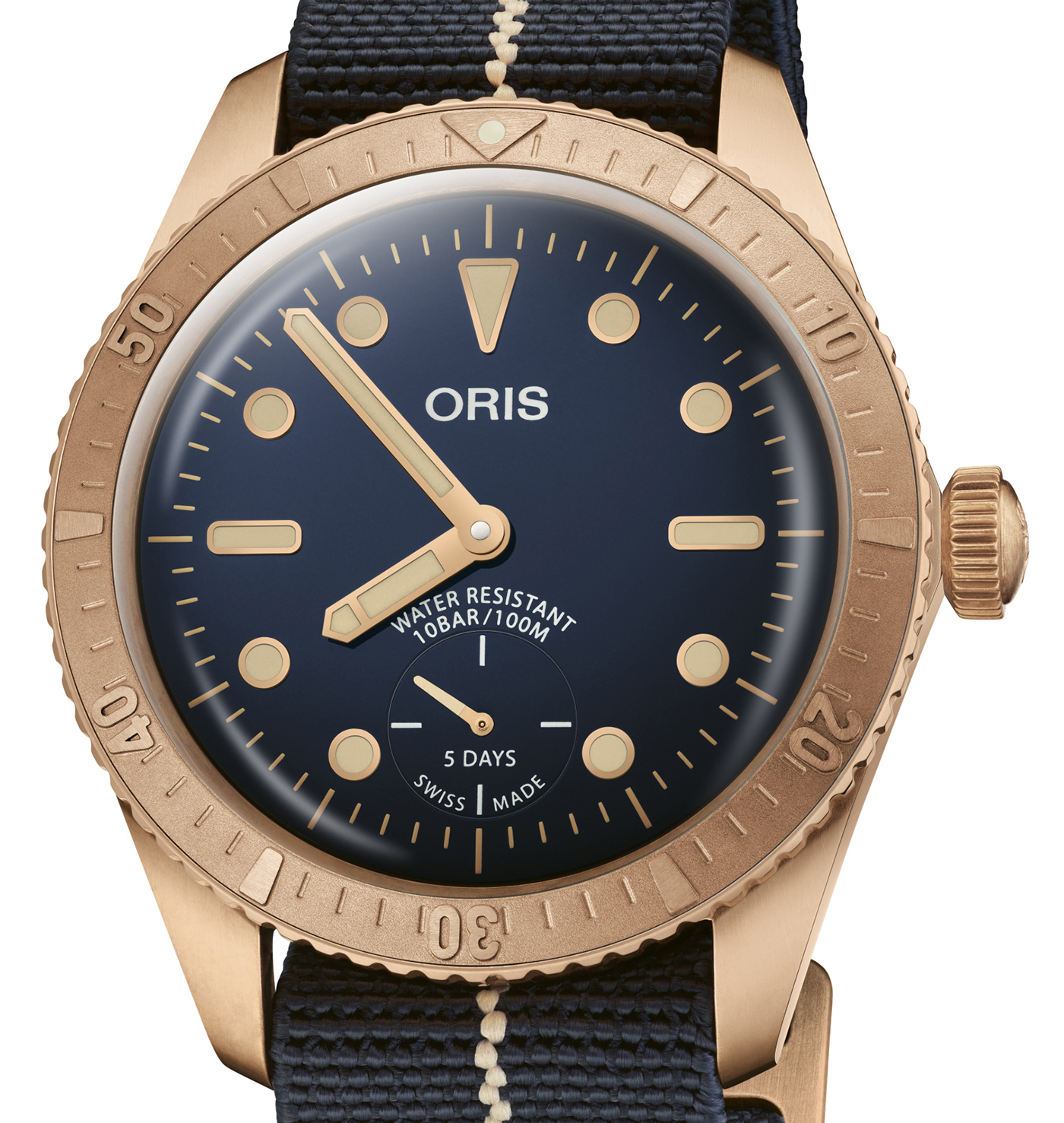 For the dial of the Carl Brashear Cal. 401 Limited Edition, Oris alloys elements of both previous Carl Brashear models together with a cleaner, slightly softer execution and a new small seconds complication. The dial surface itself remains the same deep, desaturated midnight blue as previous iterations, appearing nearly black in some images and deftly evoking the deepest recesses of the ocean. The slightly rounded applied diver style indices also make a return here, but the outer minutes track surrounding them is rendered in gilt with a much lighter line weight for a more polished, airy appearance. The largest new addition, of course, is the 6 o’clock small seconds subdial. Like the subdials of 2018’s Oris Carl Brashear Chronograph, the markings are light and minimal in white, with a rounded lumed needle hand. The switch toward a sub seconds rather than a central seconds layout also removes the 6 o’clock date window. This new no-date look gives the Carl Brashear Cal. 401 Limited Edition a substantially more elemental look, leaving no interruptions in the inky blue dial surface. 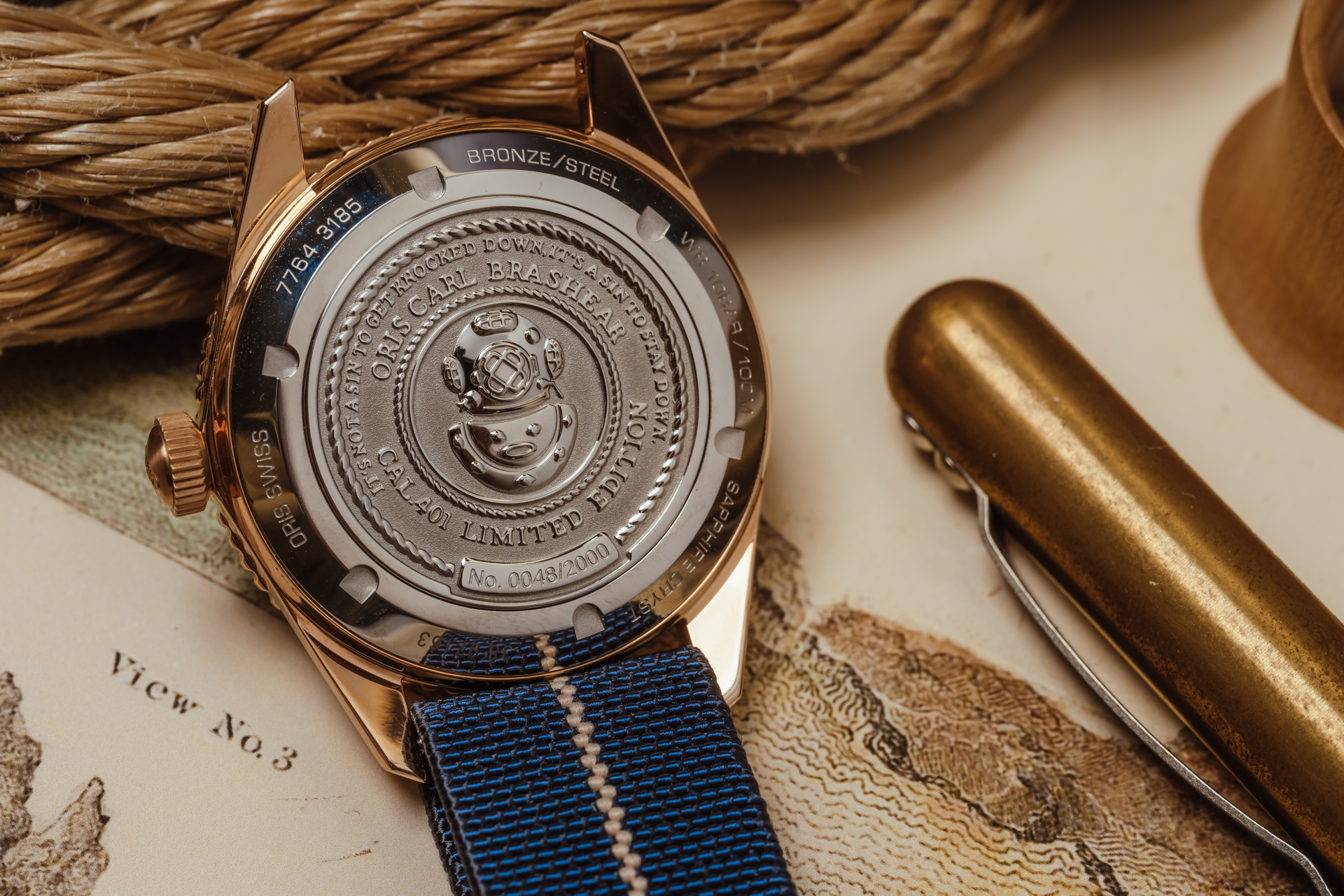 Beyond the handsome nautical design and ongoing tribute to one of America’s greatest naval figures, the Oris Carl Brashear Cal. 401 Limited Edition is the launchpad for the brand’s new in-house Calibre 401 automatic movement. Based on the Calibre 400 movement introduced in 2020, the Calibre 401 swaps that movement’s central seconds hand for a sub-seconds layout and keeps the impressive performance figures. Oris claims an anti-magnetic resistance well above the ISO 764 enhanced standard, along with a massive 120-hour power reserve at a 28,800 bph beat rate. Accuracy is within COSC chronometer standards at -3/+5 seconds per day, although Oris does not submit movements for certification. The Calibre 401’s reliability is every bit as impressive as its performance, with a 10-year warranty and 10-year recommended service interval as opposed to the usual five years. 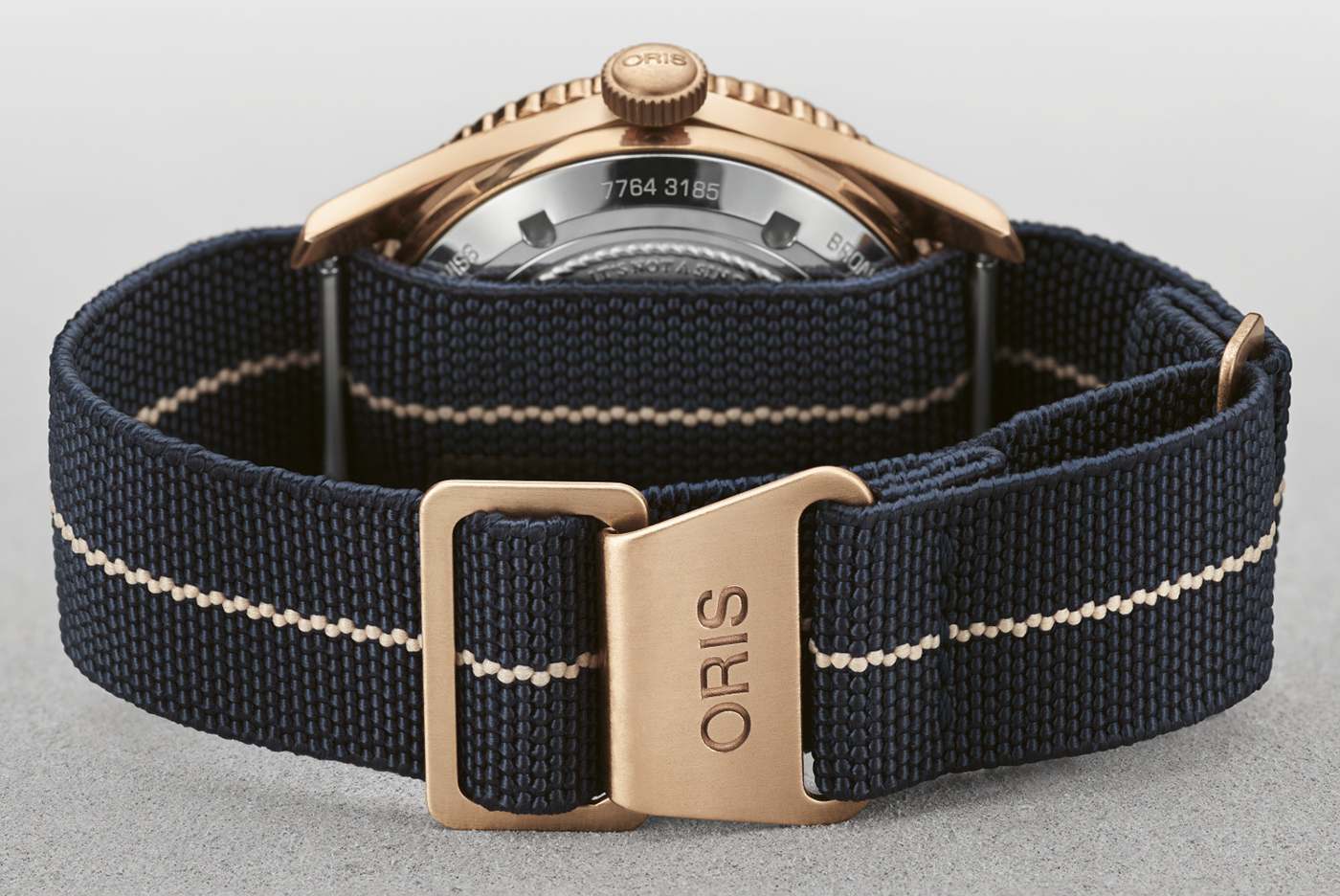 Oris opts for an unorthodox but fittingly aquatic strap pairing with the Carl Brashear Cal. 401 Limited Edition. The watch is mounted on a deep navy blue MN strap with bronze hardware and a white center stripe provided by MN strap specialists Erika’s Originals. MN, or Marine Nationale straps, originated with the French navy in the late ‘60s and offer a slimmer, more continental stretchy nylon web alternative to the more common NATO strap. The use of color here complements the dial handsomely, while the slim profile meshes well with the thin midcentury case design. 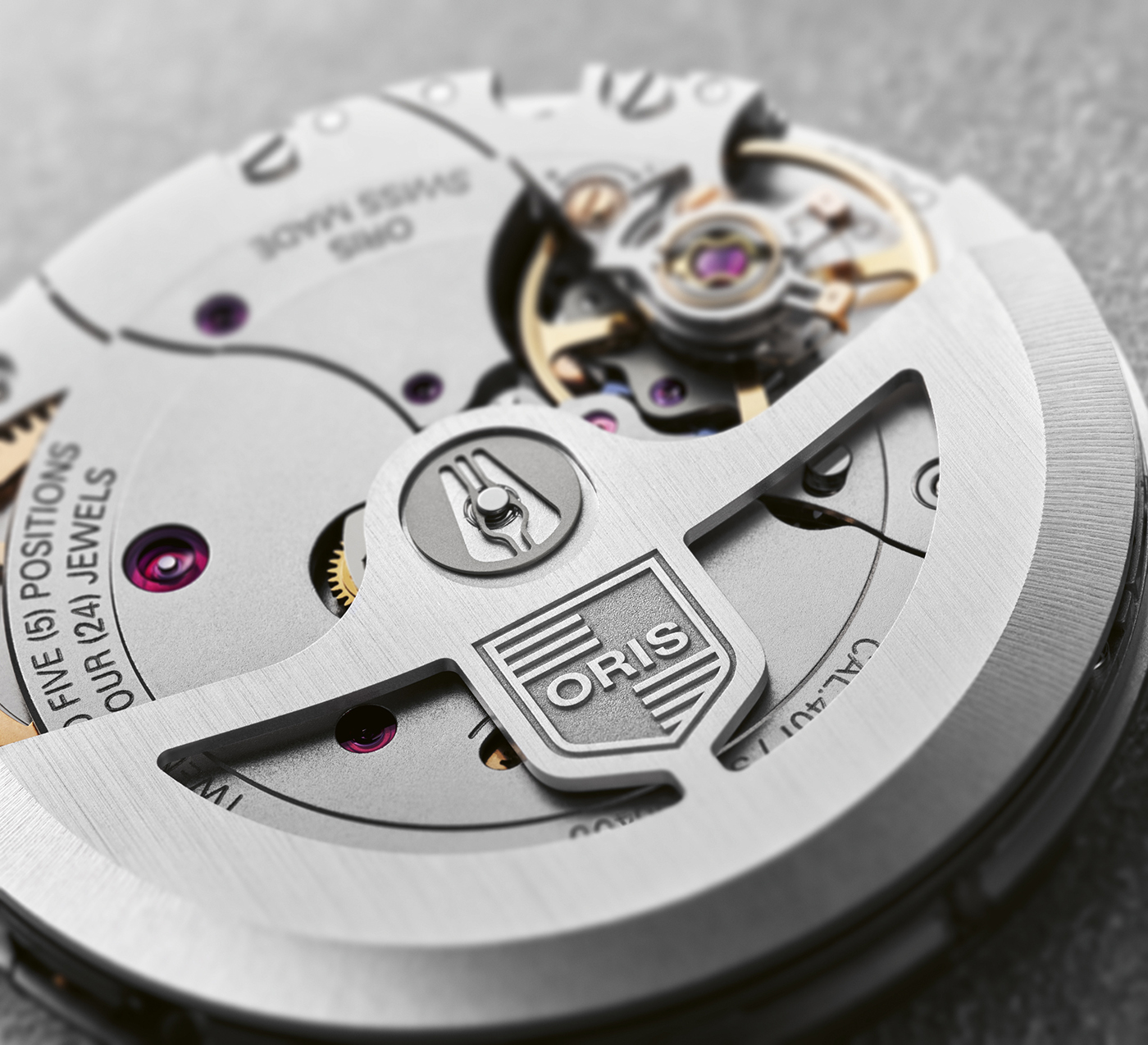 As both a stylish bronze iteration of its vintage diver line and as a debut for its newest in-house movement, the Oris Carl Brashear Cal. 401 Limited Edition offers enthusiasts a distinctive and polished alternative to the more common vintage-inspired competition. The Oris Carl Brashear Cal. 401 Limited Edition is limited to 2,000 examples, available now through authorized dealers at an MSRP of $4,200 USD. For more details, please visit the brand’s website.