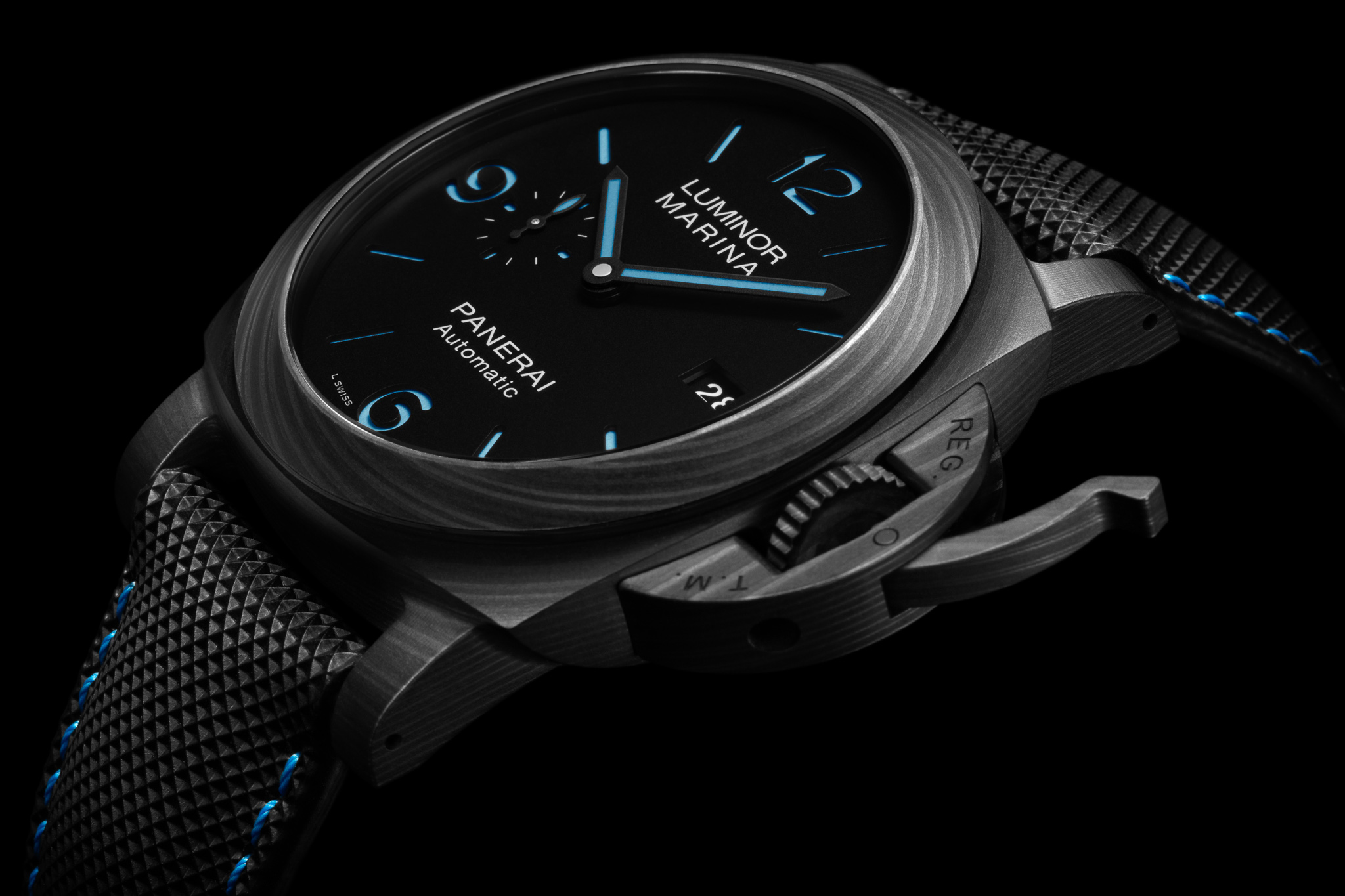 Rumor had it that 2020 was going to be the year of the Luminor for Panerai, and this new Luminor Marina Carbotech ref. PAM1661 could be an early indicator confirming that notion. Most of what we saw from Panerai in 2019 seemed to center around the re-shuffling of the brand’s portfolio, particularly with a focus on tidying up existing lines while introducing new Due dress and Submersible tool/sport models. It seems only natural that Panerai turn to its signature breadwinner for the same treatment — and leading things off is a super-technical twist on an otherwise classic. 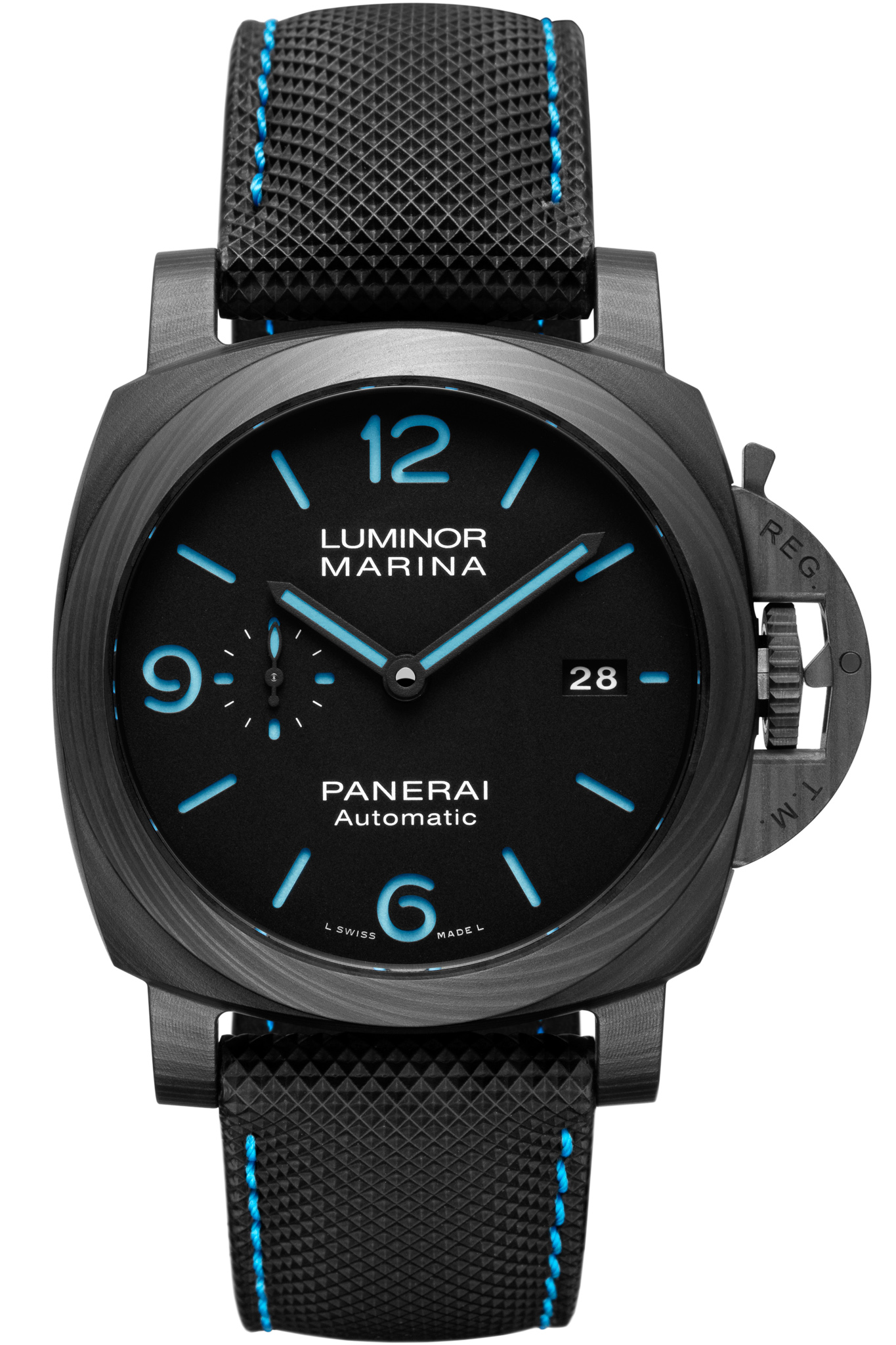 You wouldn’t be mistaken for wondering if there weren’t already a Luminor Marina rendered in ultralight Carbotech — in fact, there is: It’s PAM661, which is also a black 44mm Luminor case fitted with the same P.9010 movement. But what makes this old reference interesting isn’t its “dirty dial” (a nickname given to Panerai dials that use beige Super-LumiNova), but its somewhat rare dial configuration, which mixes applied circular indices traditionally found on Panerai’s Submersible line with the Luminor’s familiar 6-9-12 “sausage” markers. This new PAM1661 looks to be replacing the “dirty dial,” as it follows the tradition of Panerai updating older models by simply adding a “1” to the first digit in the reference number. In doing so, Panerai also seems to be ditching any potentially confusing hybrid dials and unifying the design language of its key collections — in this case, adhering to a more traditional Luminor look. 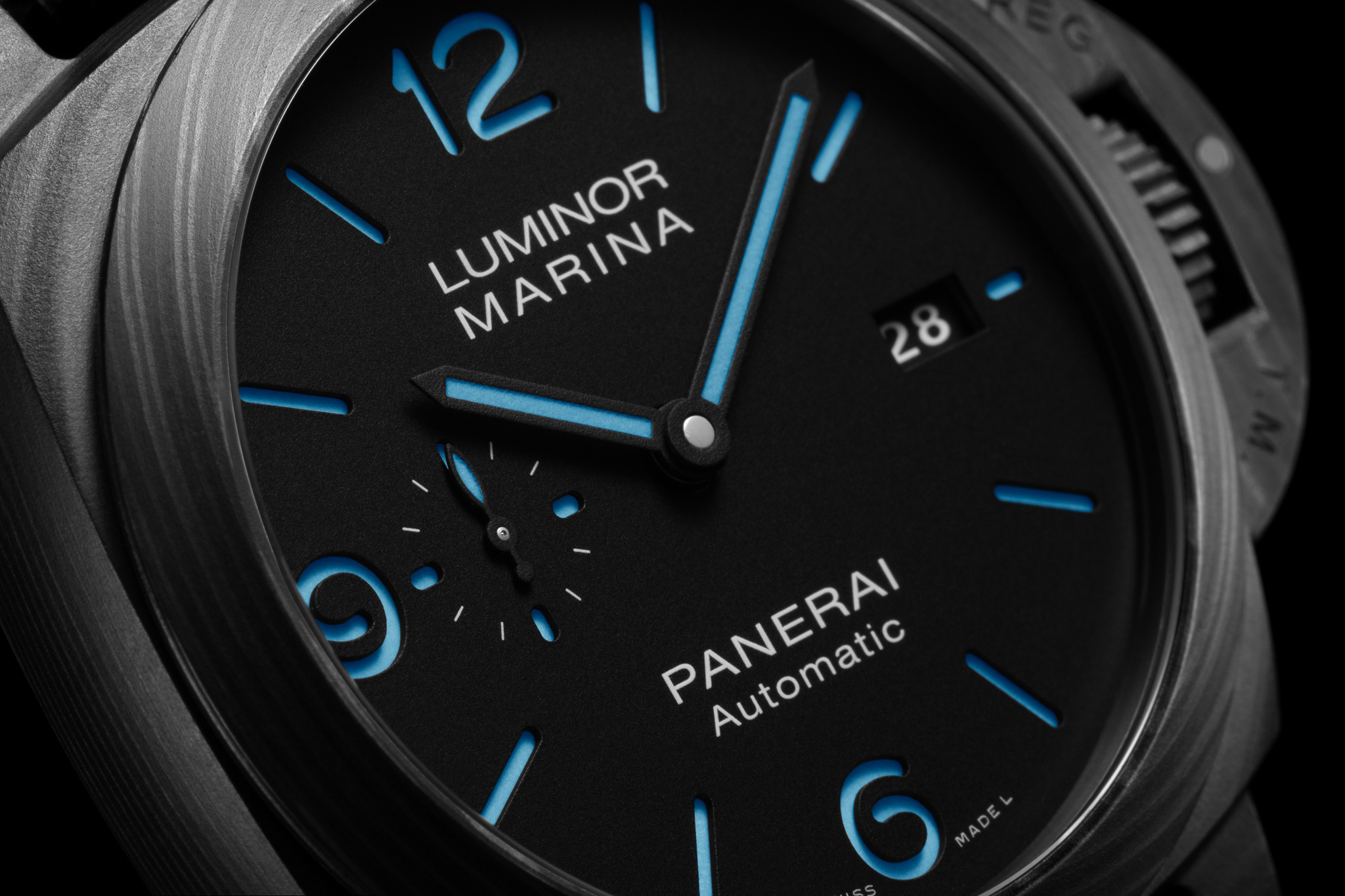 Panerai also appears to be streamlining the visual identifiers of the Carbotech models, which are all now delineated by their bright blue luminescent hour markers (or in the case of the Submersible, applied indices) for a monochromatic look that plays well with the futuristic, high-tech aesthetic of the grained carbon fiber case. This cool color scheme and the sandwich dial construction reminds me a lot of the Luminor 1950 LAB-ID from 2017, which shared a very similar dial but housed a wild movement with tantalum-based ceramic mainplates and bridges to yield a sweet, murdered-out view through its caseback. At 49mm, though, that watch was massive by even Panerai’s standards, and eye-wateringly exclusive (it was priced around $50,000 and they only made fifty of them) to boot, which dramatically limited its audience. 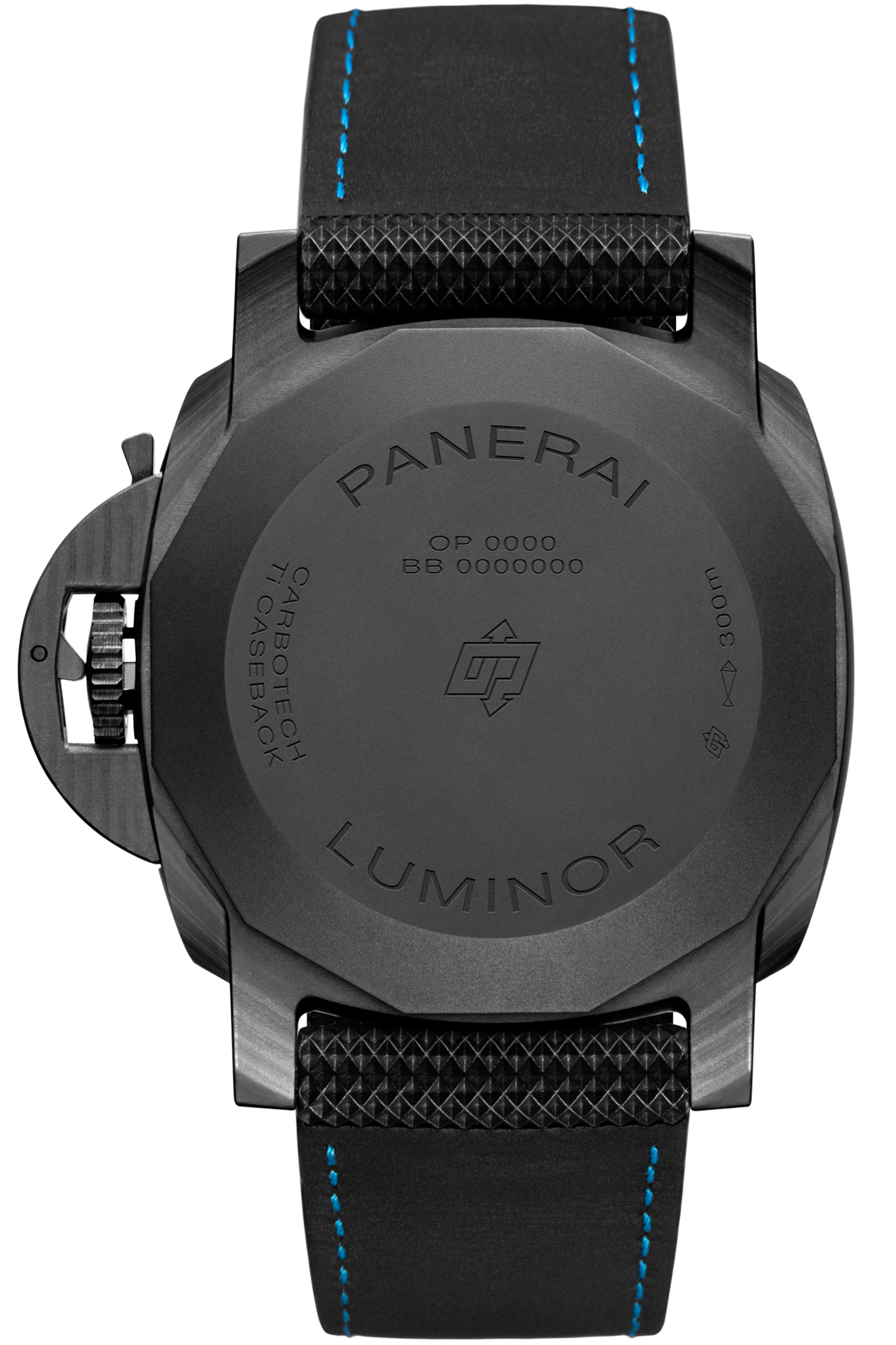 This new Luminor Marina Carbotech is still big and expensive, but considerably more approachable on both fronts by comparison, as its 44mm case houses a much more traditional movement – Panerai’s P.9010 calibre, which offers three days of power reserve and an independently adjustable hour hand, which is particularly handy for those who frequently hop between time zones. This new reference PAM1661 has a retail price of $12,800. You can learn more at panerai.com. 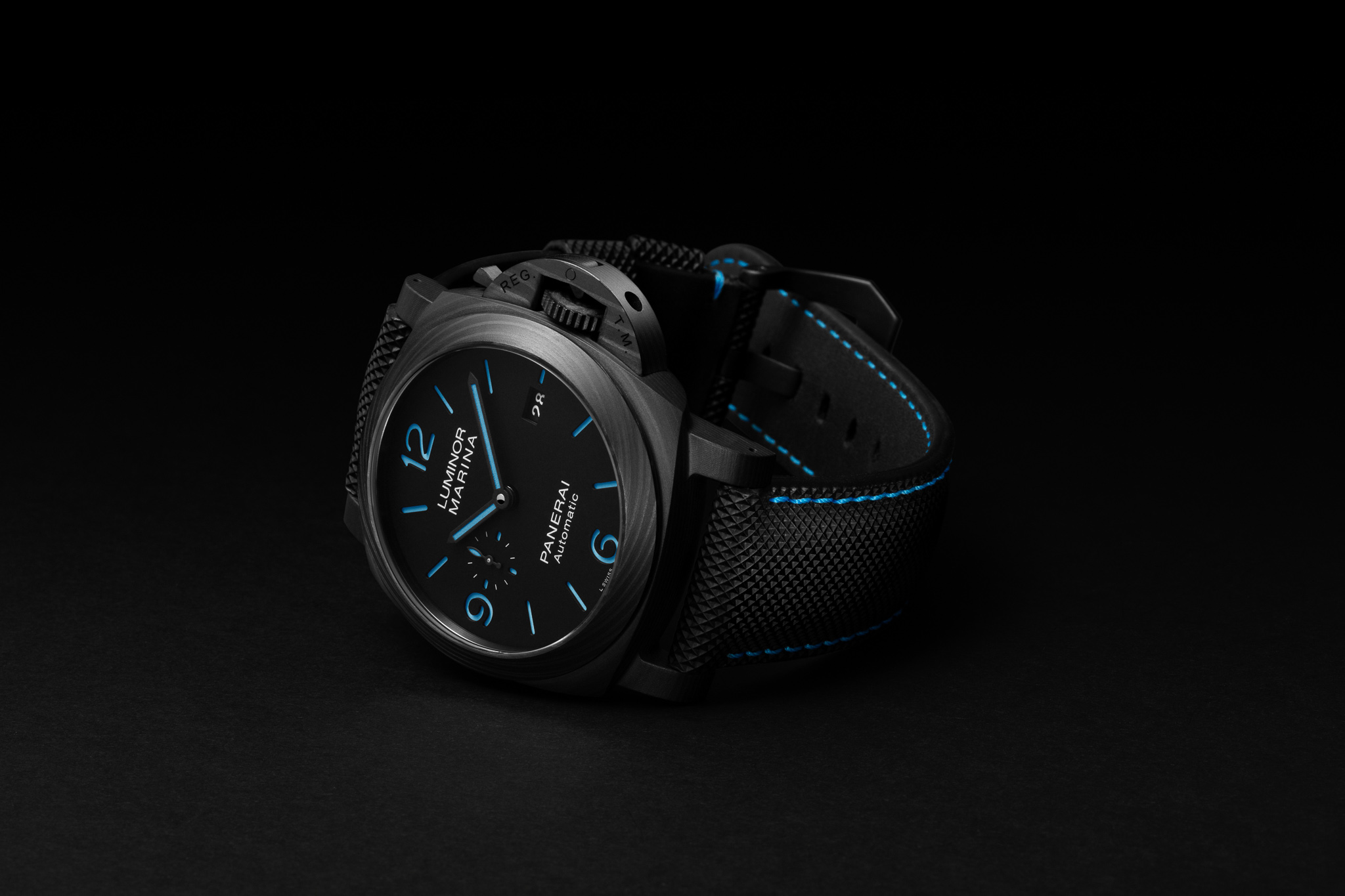