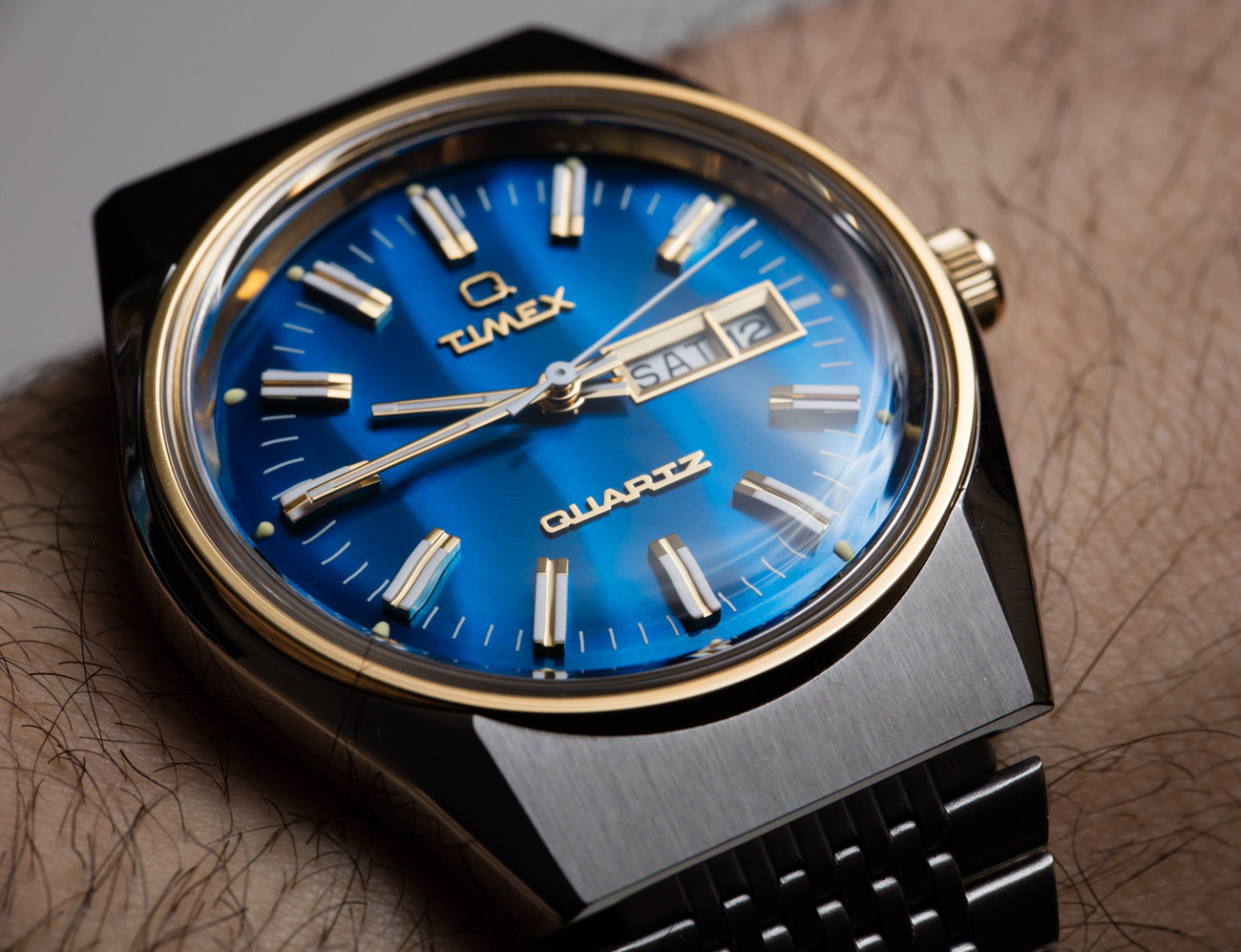 In the last year or so, American Timex released two re-issue watches in the “Q Timex” collection, both meant to celebrate Quartz movement-based (hence the “Q” name) Timex watches it released in 1979. The first of the two watches was the popular Q Timex Reissue reference TW2T80700ZV and the second (and arguably more visually interesting) is this Q Timex Reissue Falcon Eye reference TW2T80800V3 that I am going to discuss today.

The “Pepsi bezel” Q Timex has a diver’s watch look and sold out quickly, namely for its resemblance to various popular Rolex watches. How could it not for this affordable a price? The Q Timex Falcon Eye has the same under-$200 price but is an entirely different watch when it comes to case, dial, hands, and bracelet. Still, the Q Timex Reissue watches are clearly close cousins. 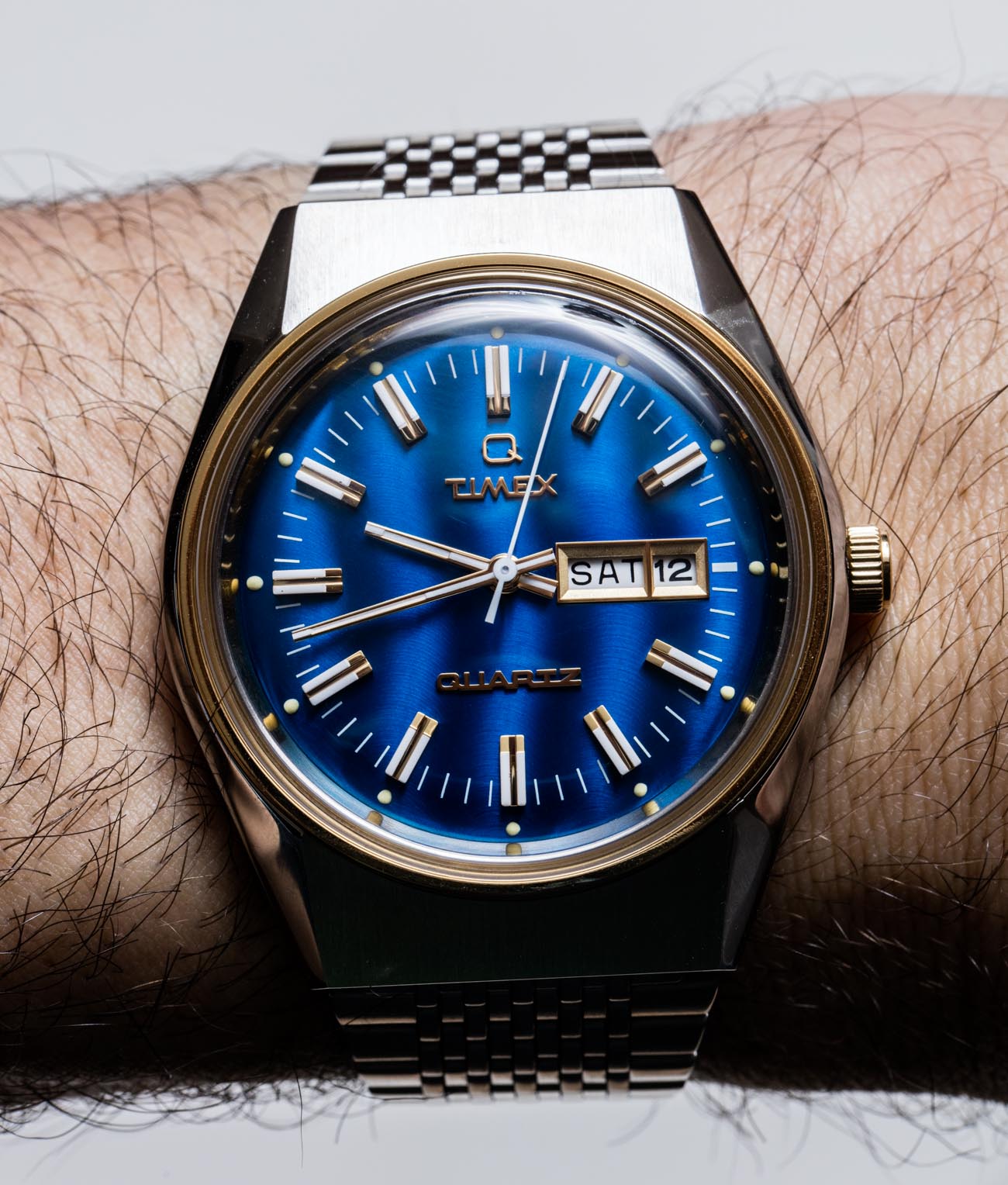 Timex is no stranger to “vintage re-leases,” in addition to producing brand-new watches that are inspired by vintage models. With the advent of the increasingly ubiquitous smartwatch technology product, general consumers, as well as watch enthusiasts, are increasingly (or will be increasingly) interested in “technology watches from the last 40 or so years” and their implications on what we wear on the wrist. It was during the late 1970s that quartz movement technology started to hit its stride on a mass consumer basis. The late 1960s saw the debut of electronic quartz oscillator-powered timepieces that, from a performance and cost perspective, put traditional mechanical watches to shame. This was also the exact same time that the Far East began to be so important in the watch industry because quartz movements could be much more easily and efficiently manufactured, as compared to delicate and nuanced mechanical movements that require not only specialized machines but layers of specialized skills in order to produce them.

To have a quartz movement-based wristwatch or clock in the 1970s and 1980s was a point of pride. Many products proudly featured a “Quartz” label on the dial in order to remind consumers how technically sophisticated the mechanisms were, as well as how accurate they would be during day-to-day performance. In this instance, Timex decided to not only put a large “Q” above the Timex brand logo, but also to fit the lower part of the dial with a full “Quartz” term applique. 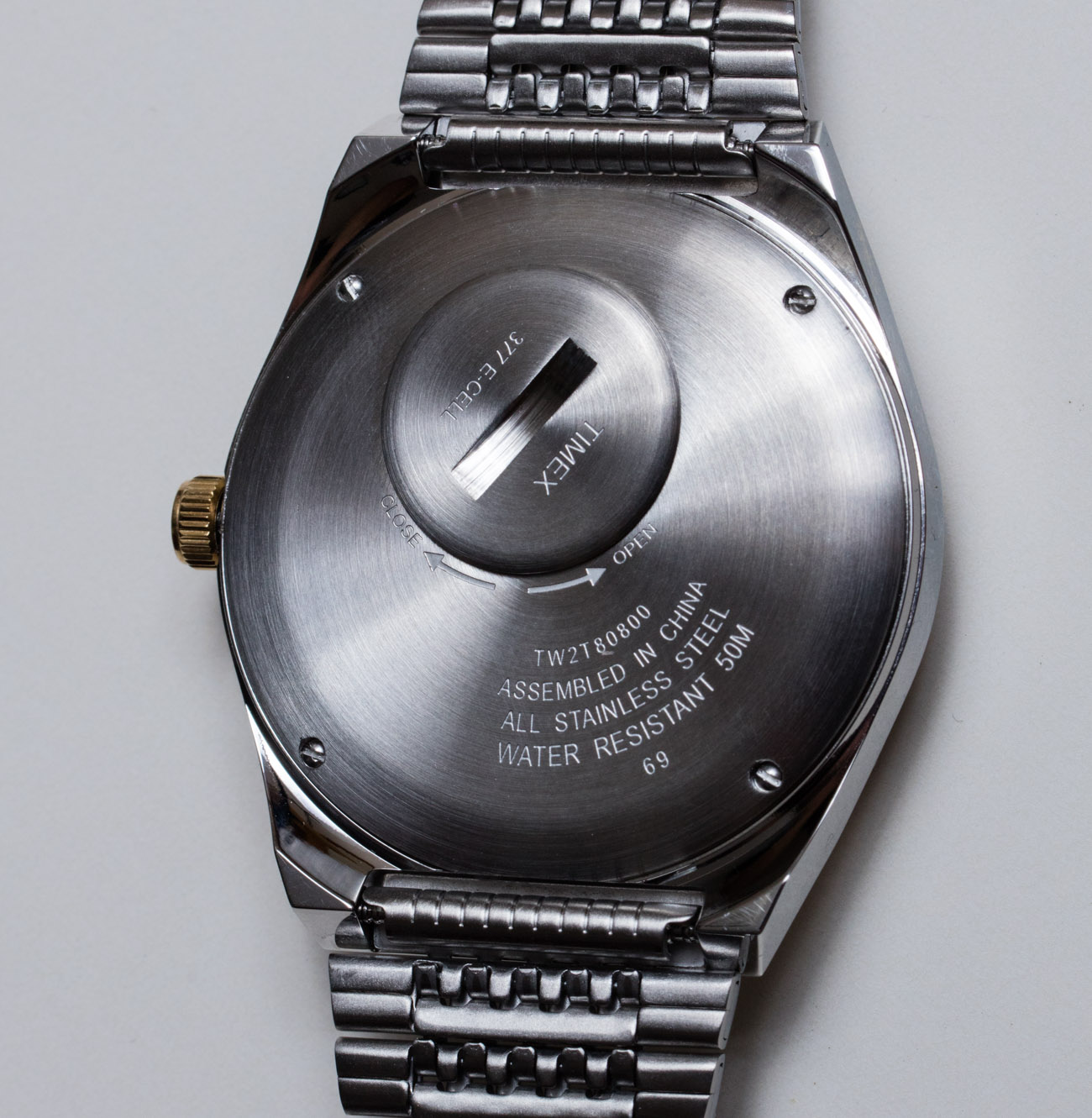 The quartz movement inside of the watch offers the time, with date and day of the week, and features a dedicated port on the rear of the watch used to easily change the battery. Many local watchmakers in the past started to hate such ports because they allowed consumers to easily change batteries themselves, which removed the need for people to take their timepieces each year or two to a watchmaker for a battery change service.

I’ve not personally seen the original Q Timex Falcon Eye watch that this TW2T80800V3 reissue is meant to celebrate, though I have seen watches from the era, and I have to say that this circa 2019 watch in many ways would not look out of place in a 1979 watch store display. Timex really did an impressive job making this modern watch feel as though it were manufactured 40 years ago. Twist and joke around with that statement as much as you like, but the point is that many “vintage reissue” watches from today (especially at higher price points) don’t really have too much in common with their ancestors when you hold them both in your hand.

The stainless steel case is 38mm-wide, which isn’t too large by today’s standards. We’d now call that a mid-sized watch, though most might call it small. The watch wears a bit larger than its 38mm-width might suggest due to the wider, integrated-style lug structure. The case is 12mm-thick and topped with a domed acrylic crystal in authentic vintage style. A bit of gold-toned metal is used on the case and dial, including the bezel and the crown, for a nice visual effect. 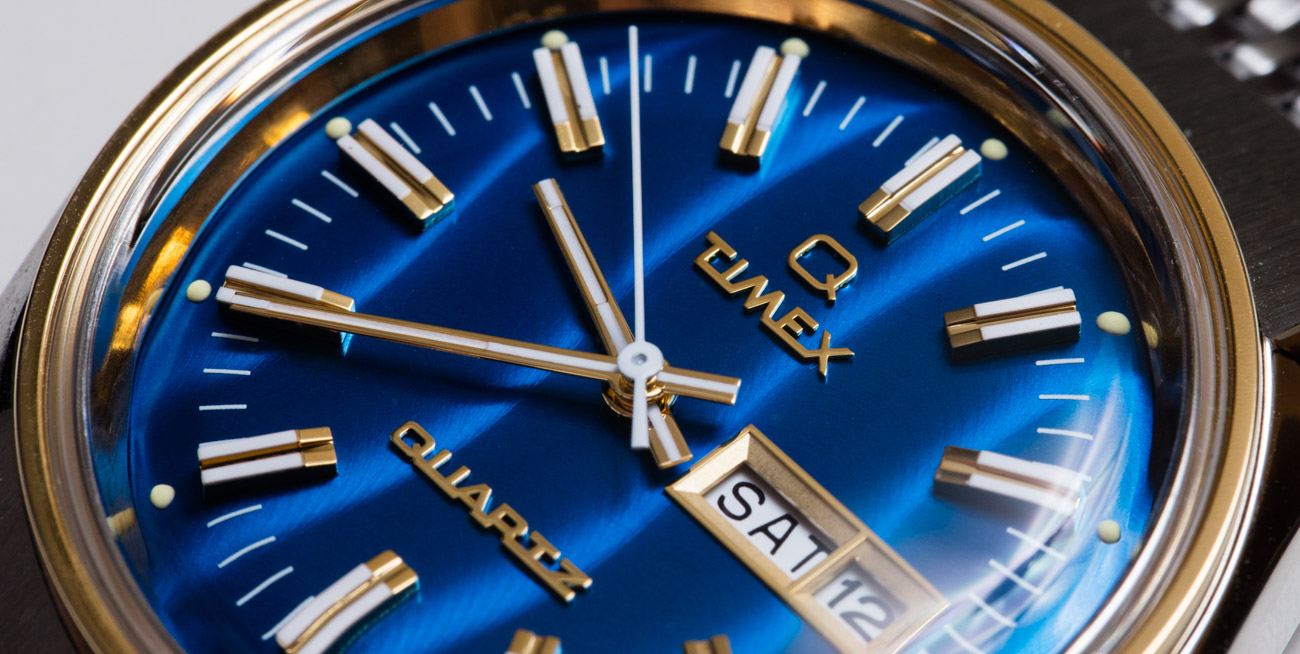 In addition to the handsome nature of the Q Timex Falcon Eye’s case, the real treat is the dial. Timex didn’t exactly invent this dial style, as it is inspired by some Rolex watches and others from the era in terms of elements such as the hands and how the hour markers are cut and applied. What I’ve always liked about these kinds of dials is that they manage to be both decorative and legible Despite the various polishes, colors, and textures, the Falcon Eye dial is very easy to read. The face is neat because it has wavy (as opposed to straight) Geneva-style stripes in the falcon eye blue. That contrasts with the applied hour markers and white colors that help the dial be as readable as possible. The dial is also pretty, with a handsome assortment of complementary colors and just enough pizazz to command a bit of attention.

The 1970s-era bracelet style uses two relatively thin, tapering steel bracelet segments that connect with a clasp that requires a bit of finger ballet to close properly. There has been some interest in trying to bring back these bracelets for mainstream appeal, and I don’t think there is much to that. The bracelet looks nice enough when worn, but it isn’t going to impress anyone accustomed to contemporary watch bracelets when it comes to adjusting the size of the bracelet or having a safety clasp like most modern bracelets do. 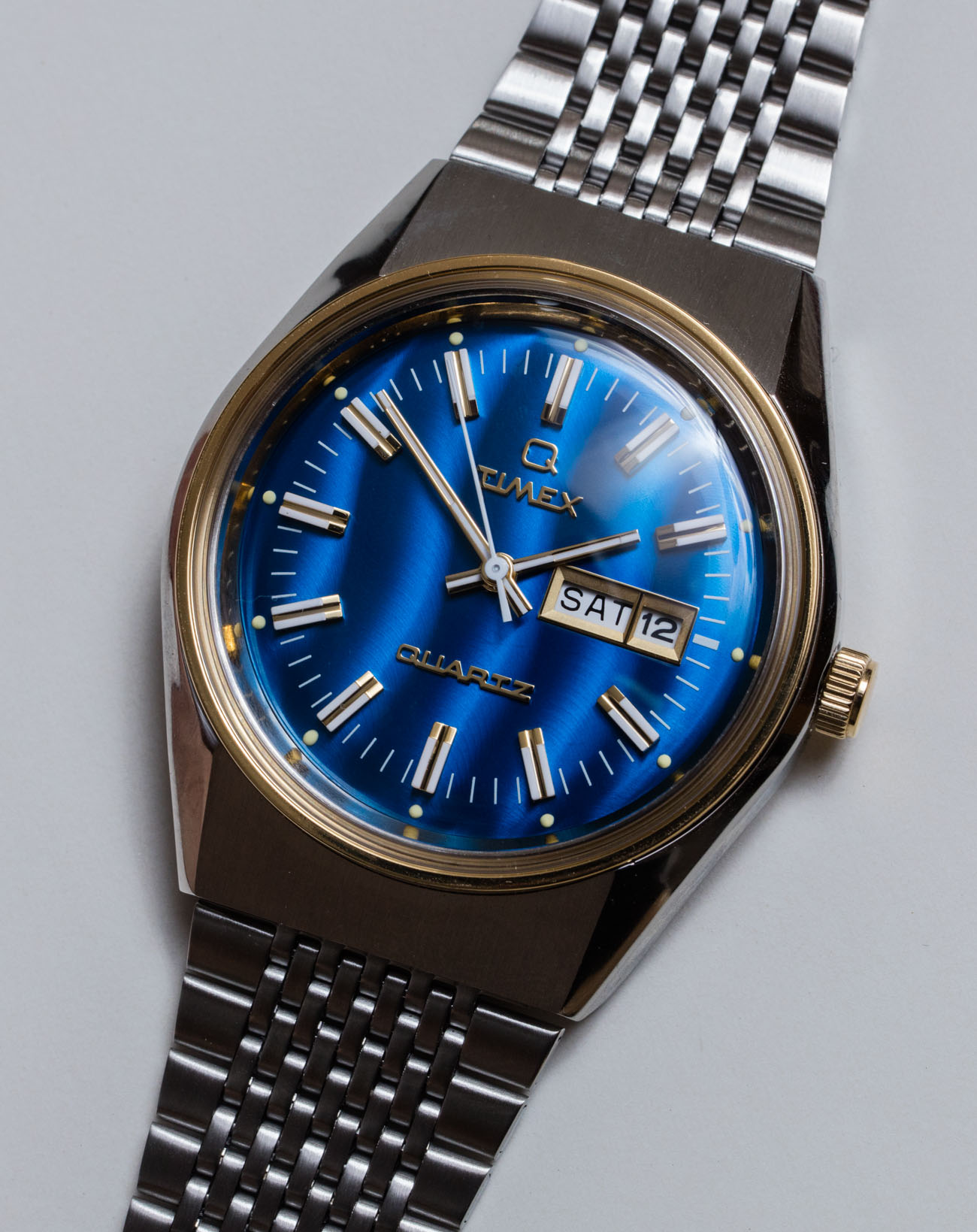 One important point about the bracelet is that when it comes to sizing, options are a bit limited for small wrists. To size the watch, you must manually open up a latch on part of the clasp mechanism and then slide it along the bracelet. The clasp hits a natural stopping point where the bracelet begins to widen as it tapers to the lugs. The overall proportions are visually correct, but the result is that smaller wrists will have an issue wearing the Q Timex cases snugly enough. That is important to consider because the 38mm-wide case size will mostly appeal to smaller men’s wrists and the wrists of most women. For reference, my relatively narrow wrists found that about a 2-3mm smaller bracelet size would have helped the Q Timex Falcon Eye wear just a bit better. The good news is that the bracelet is not, in fact, integrated, and you can swap it out with any 18mm-wide watch strap or bracelet that might fit your wrist a bit better.

I was impressed with the Q Timex Falcon Eye from the moment I first saw it. While it doesn’t represent anything new (that is actually the whole point of a re-issue), it does add strength to the argument that these days you really don’t need to spend much to get a decent timepiece. Don’t get me wrong, I wouldn’t try to compare a Q Timex with a high-end luxury watch, but at this price point you get a lot of bang for your buck and a timepiece that is truly nice looking on the wrist and fun to behold. Price for the Q Timex Falcon Eye reference TW2T80800V3 is $179 USD. Learn more at the Timex website here.

Necessary Data
>Brand: Timex
>Model: Q Timex Falcon Eye reference TW2T80800V3
>Price: $179 USD
>Size: 38mm-wide, 12mm-thick, ~44mm lug-to-lug distance
>When reviewer would personally wear it: As a retro-styled dress watch when its colors and theme would suit the occasion and outfit.
>Friend we’d recommend it to first: Budget price leaves appeal open to anyone wanting an attention-getting but unpretentious timepiece. Also for those keen on some late 1970s, early 1980s nostalgia.
>Best characteristic of watch: Excellent value for the money when it comes to overall build quality and materials. Simple, straight-forward concept that is easy to understand; affordable. Quirky enough not to feel boring.
>Worst characteristic of watch: Bracelet design makes it challenging to wear for the same small wrists of those who are mostly going to be interested in the case size. Timex seems to be producing Q Timex models in smaller batches, making them a bit harder to acquire. 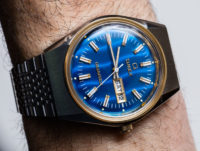 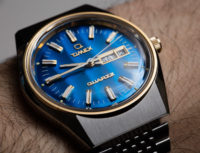 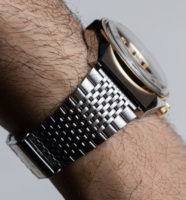 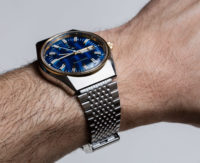 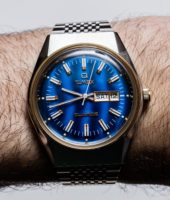 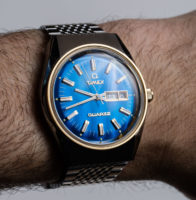 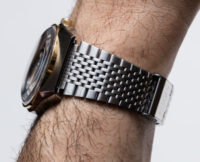 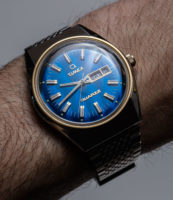 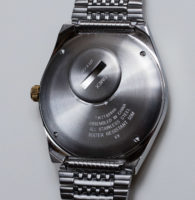 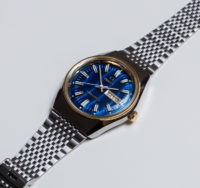 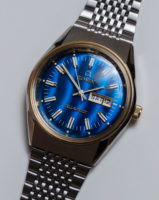