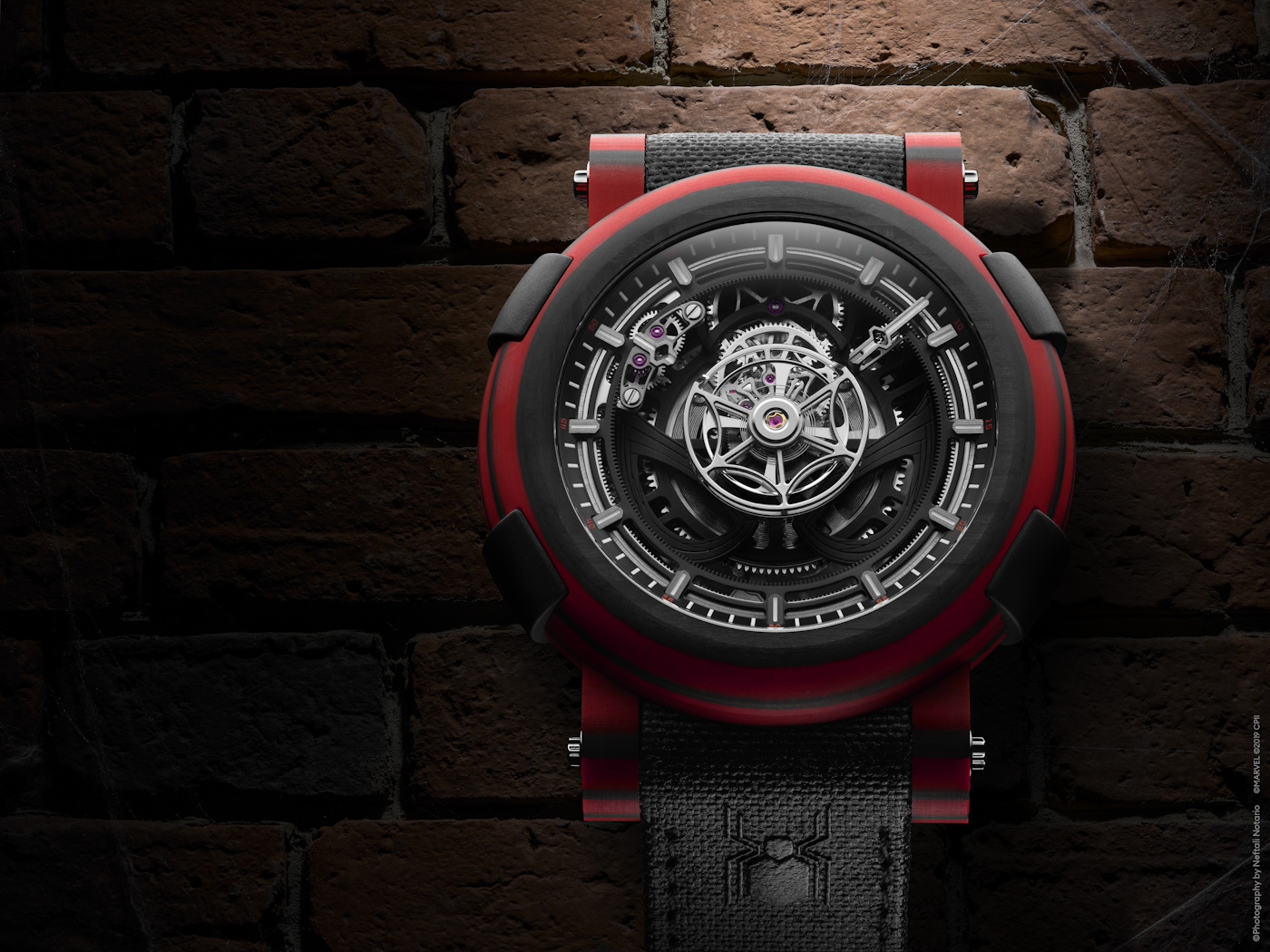 Major licensed tie-ins, whether with major film franchises, pop culture icons, or comic book heroes, have become a rising trend in the watch industry over the past several years. These tie-in models have come in all manner of forms, from subtle nods to full-blown fantasy reinterpretations of existing timepieces, but for the most part these tie-in deals have occupied the more affordable side of the watch market. Enthusiasts typically see the luxury watch industry as more conservative when it comes to lending its high end designs to be shared with another brand, but paradoxically that trend reverses in the fanciful and ultra-exclusive pinnacle of haute horlogerie. Boutique watchmaker RJ (formerly Romain Jerome) is a perfect example of this luxury tie-in philosophy, and for its latest releases the brand has partnered with Marvel to create a pair of limited edition watches inspired by everyone’s favorite wall-crawler: Spider-Man. Both the RJ ARRAW Spider-Man and the ARRAW Spider-Man Tourbillon draw inspiration from Marvel’s current cinematic adaptation of the classic character, combining advancements in both materials and movement design to deliver something truly unlike anything else.

The star of the collection is clearly the RJ ARRAW Spider-Man Tourbillon. Right from the start, everything about the piece is intricate, highly advanced, and yet surprisingly durable, in keeping with the superheroic inspiration. The literal centerpiece, of course, is the central tourbillon, a first for RJ, which commands attention from the middle of the dial and features playful nods to the web-slinging superhero in the form of a web-shaped tourbillon cage in Grade 5 titanium. The rest of the ARRAW Spider-Man Tourbillon’s dial is surprisingly orderly and simple for a skeletonized tourbillon, with the notable exception of the hands. At first glance, the hours and minutes are nearly impossible to read, but after a quick inspection the short unorthodox handset reveals itself. Due to the massive central tourbillon, RJ opts to move the hands with an ornate planetary ring gear system, with gear-driven modules connected to both hands driving them around the outer chapter ring. It’s a novel idea in theory but makes the watch incredibly difficult to use in practice. Once the dial is closely scrutinized, however, several more details emerge, including the stealthy black Spider-Man eyes that make up the lower half of the black skeleton framework. 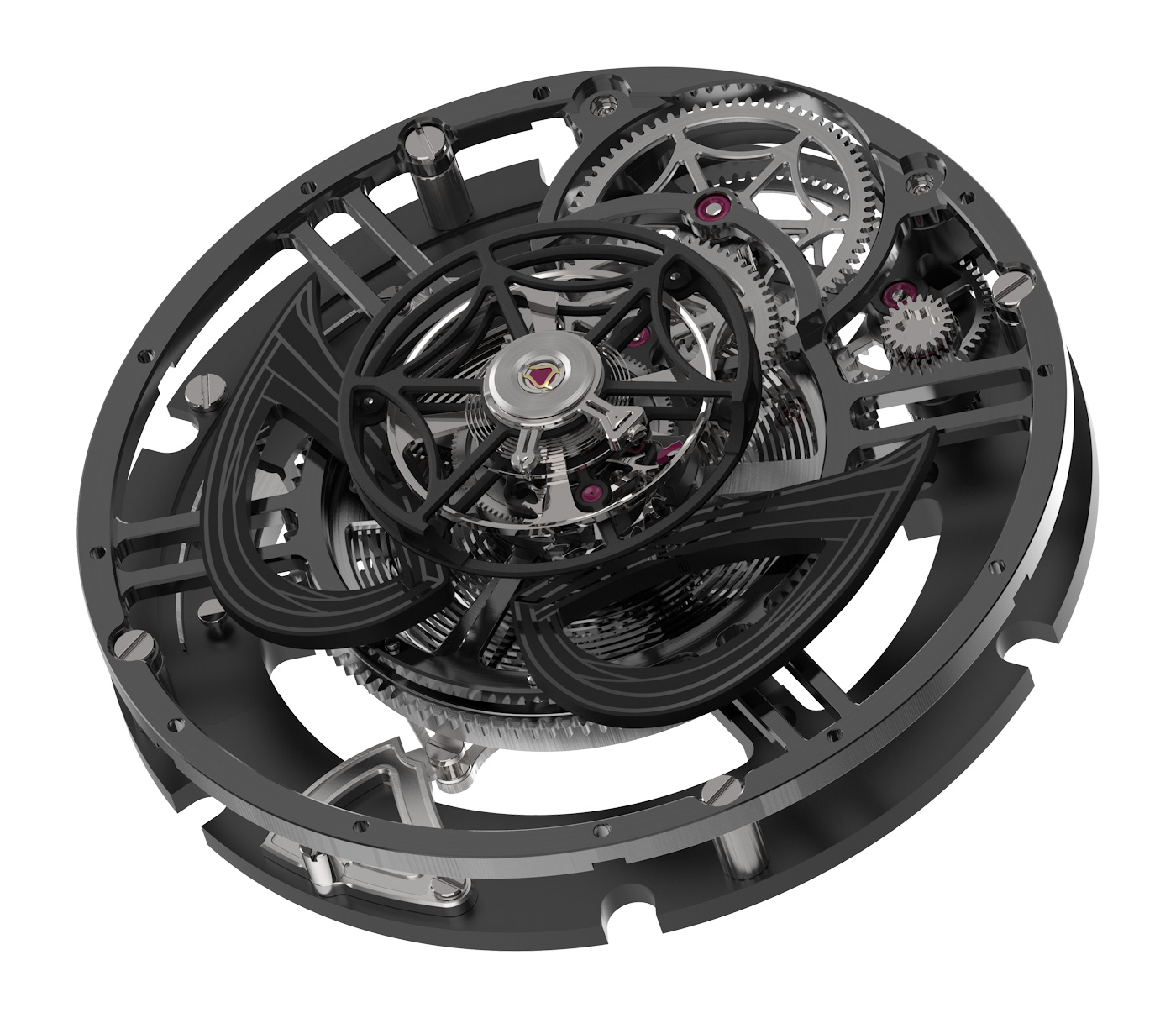 The movement itself, the RJ-7000 in-house central tourbillon movement, is groundbreaking for the brand beyond just the central tourbillon itself. The massive main barrel of the movement allows for an immense 150 hour power reserve, which in turn drove RJ to develop an innovative new winding system. The Spider-Man Tourbillon does not have a traditional crown, instead using a twisting ring that folds flat against the caseback when not in use for both winding and setting. RJ claims this system allows for much faster winding, and in addition it allows the case to be completely symmetrical. 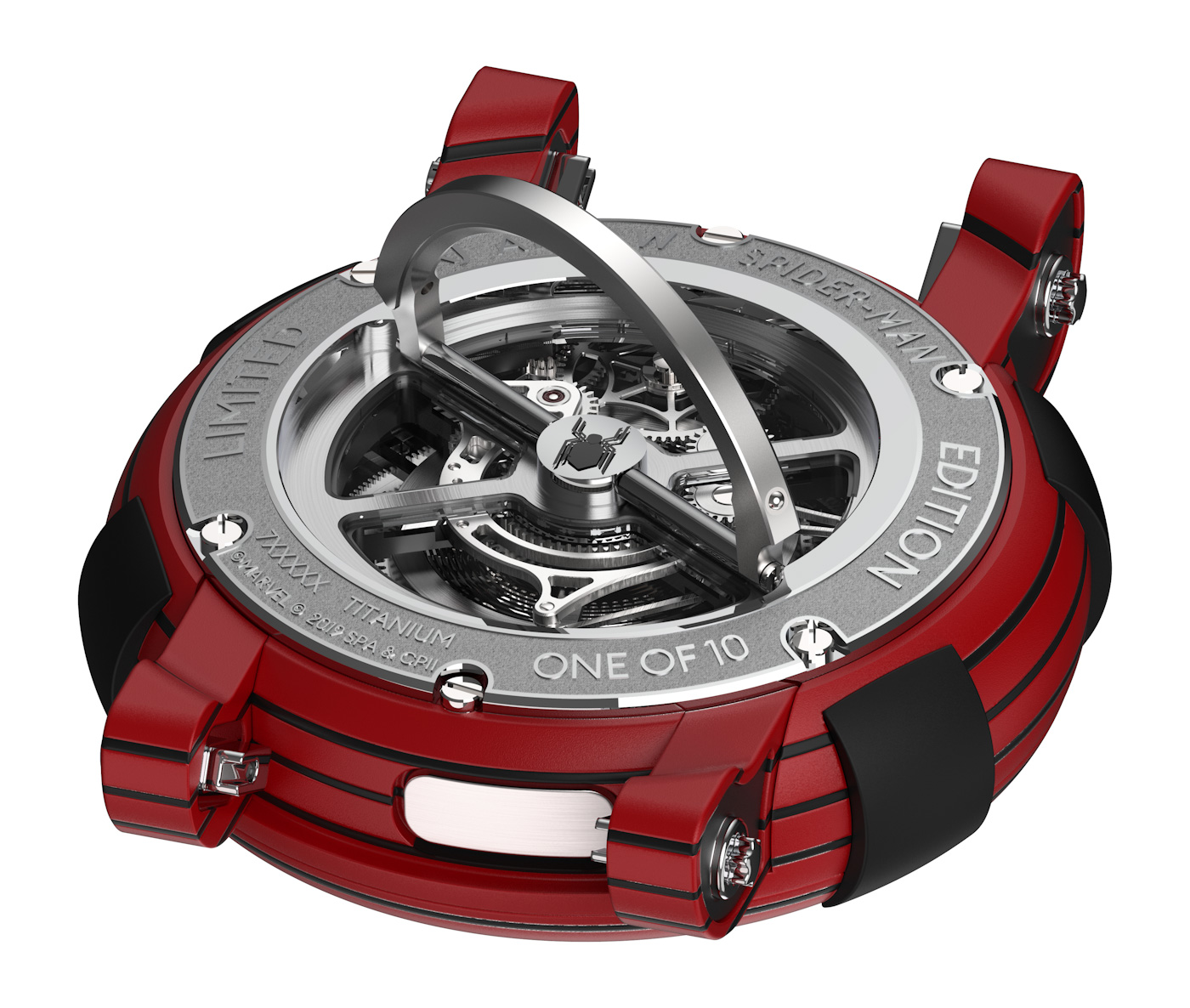 Speaking of the case, the RJ ARRAW Spider-Man Tourbillon is offered in two distinct 45mm case styles inspired by different iterations of Spidey’s iconic suit. The first of these, in red and black, references the look of the main suit in the latest film, using sandwiched layers of carbon and red fiberglass to achieve a look that’s equal parts durable and distinctive. The other takes a monochrome black carbon approach with a polished web pattern that calls to mind both the improvised stealth suit from last year’s blockbuster “Spider-Man: Far From Home” as well as the iconic black symbiote suit from the pages of Spider-Man’s comic book adventures. Both styles follow RJ’s signature “bumper” design, with prominent rubber protrusions at 2, 4, 8, and 10 o’clock coupled with a wide, rounded case and long straight lugs. 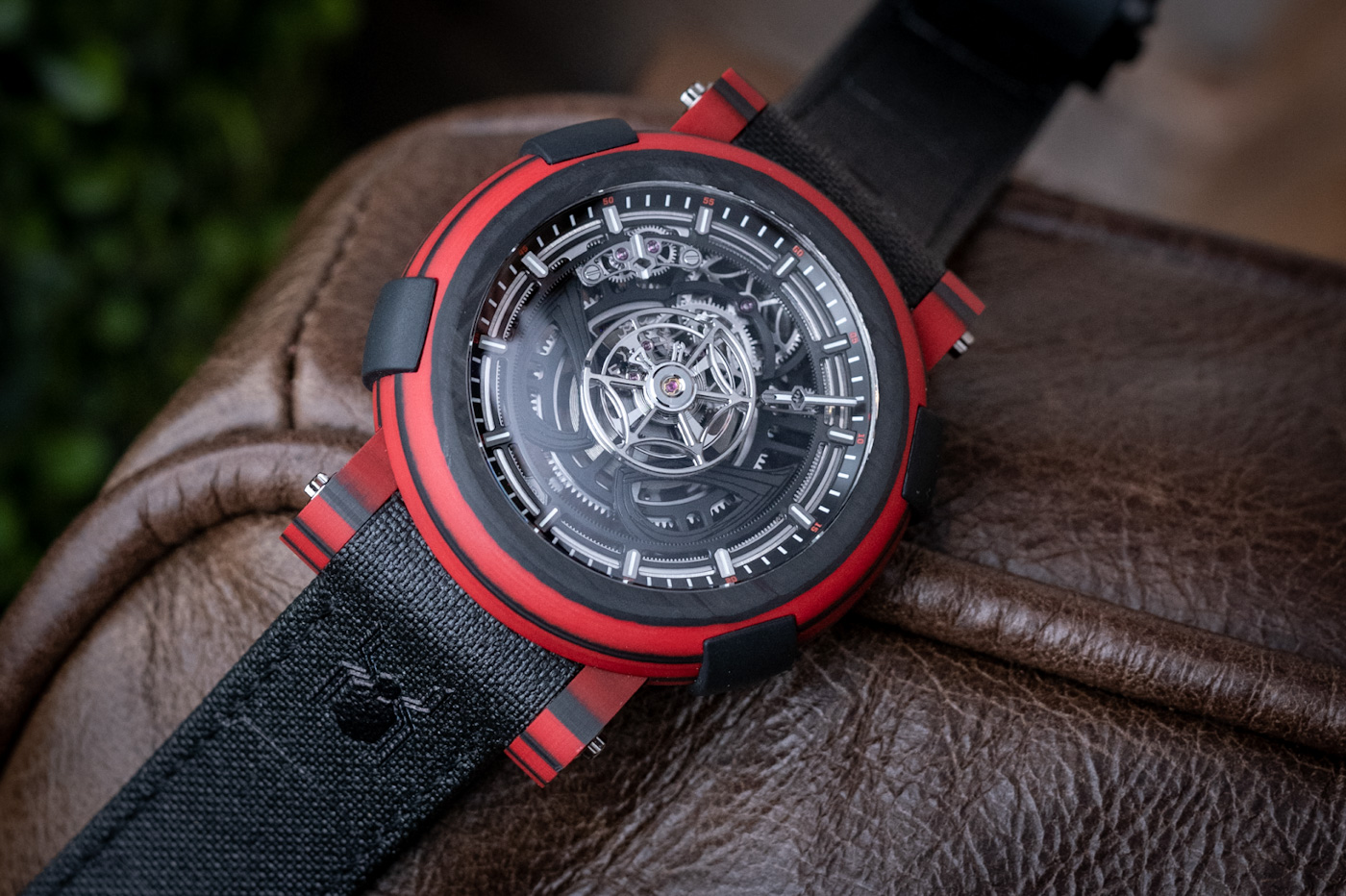 Both versions of the ARRAW Spider-Man Tourbillon come mounted on a materially impressive black strap in polyamide lined with rubber. This combination leads to an incredibly lightweight and durable strap meant to mimic the feel of Spider-Man’s suit, and to this end is decorated with a raised spider emblem on each side of the case. If the high tech solution isn’t your cup of tea, strap changing is made simple with RJ’s unique push button quick release system. Both versions of the RJ ARRAW Spider-Man Tourbillon are limited to 10 pieces each, available now at authorized dealers and at RJ’s website for a price of $97,700 for the red version and $92,000 for all-black carbon. 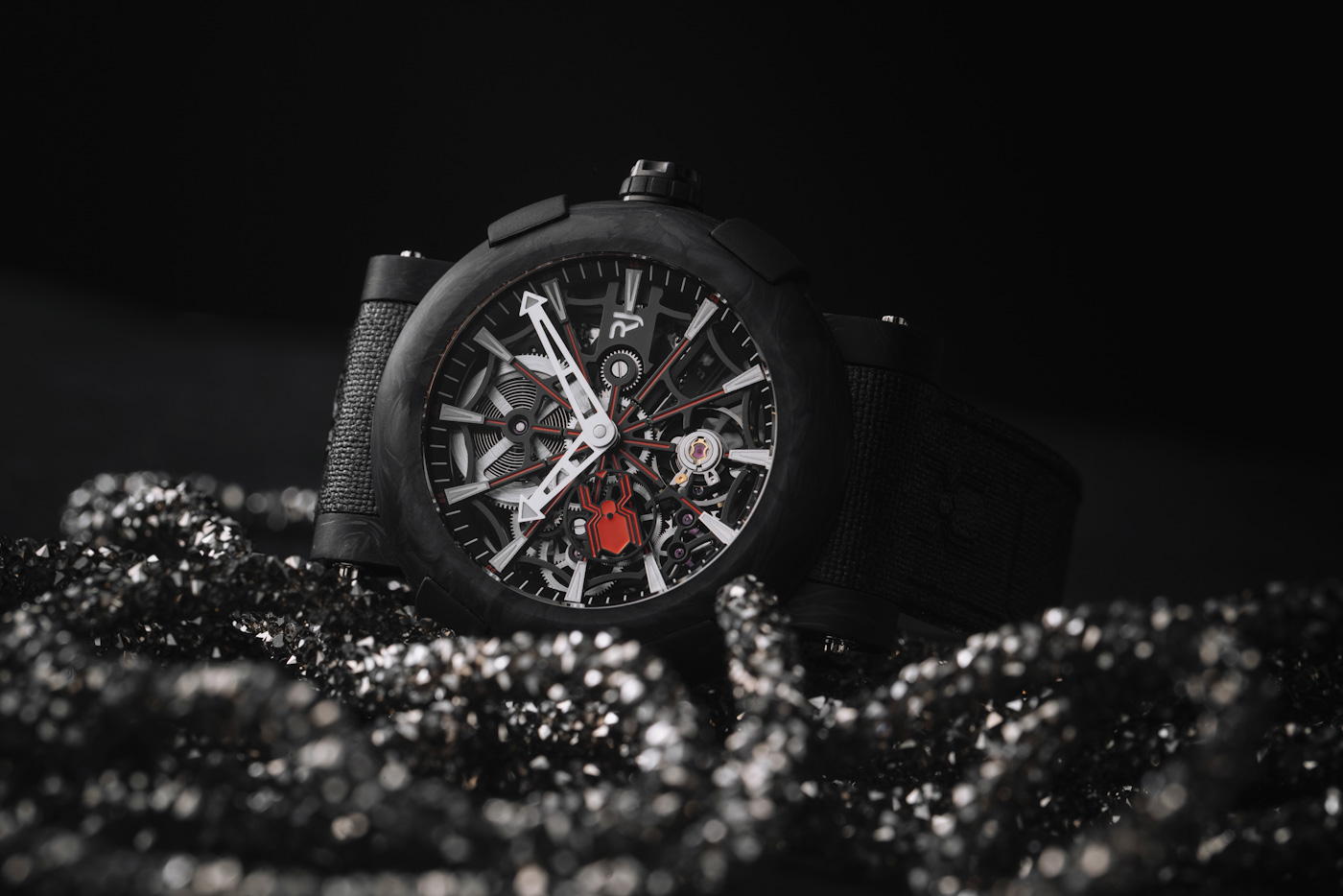 The (comparatively) more affordable RJ ARRAW Spider-Man focuses less on sheer mechanical prowess and more on adapting existing RJ design elements to the theme of the character. To this end, the dial features RJ’s hallmark skeletonized ladder hands, paired with a blacked out skeleton design resembling a web. The applied indices are long and dagger-like tapering wedges, while between 8 and 9 o’clock sits the most overt reference in the form of a sub seconds disk using a red lacquered spider emblem as a hand. 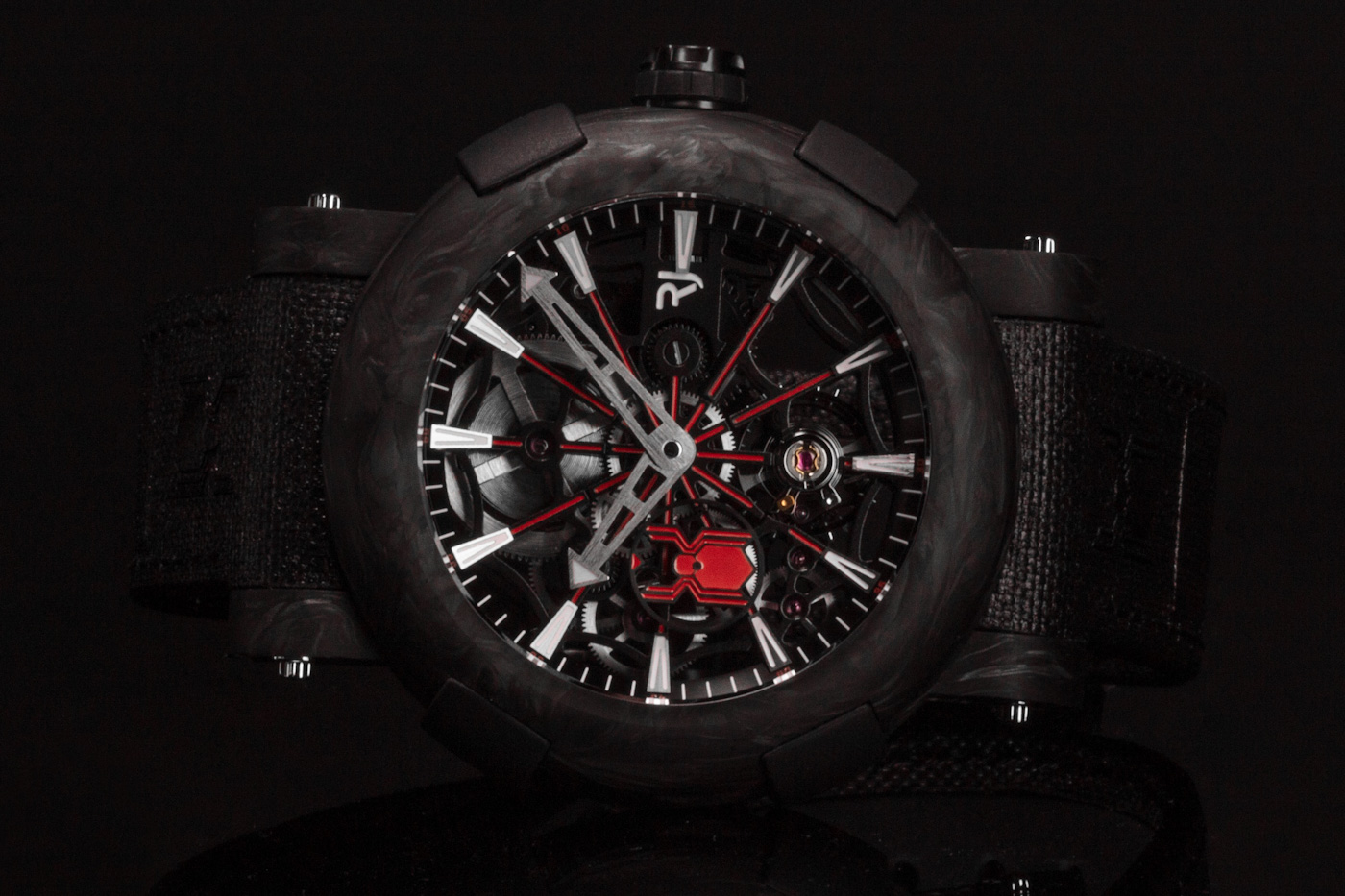 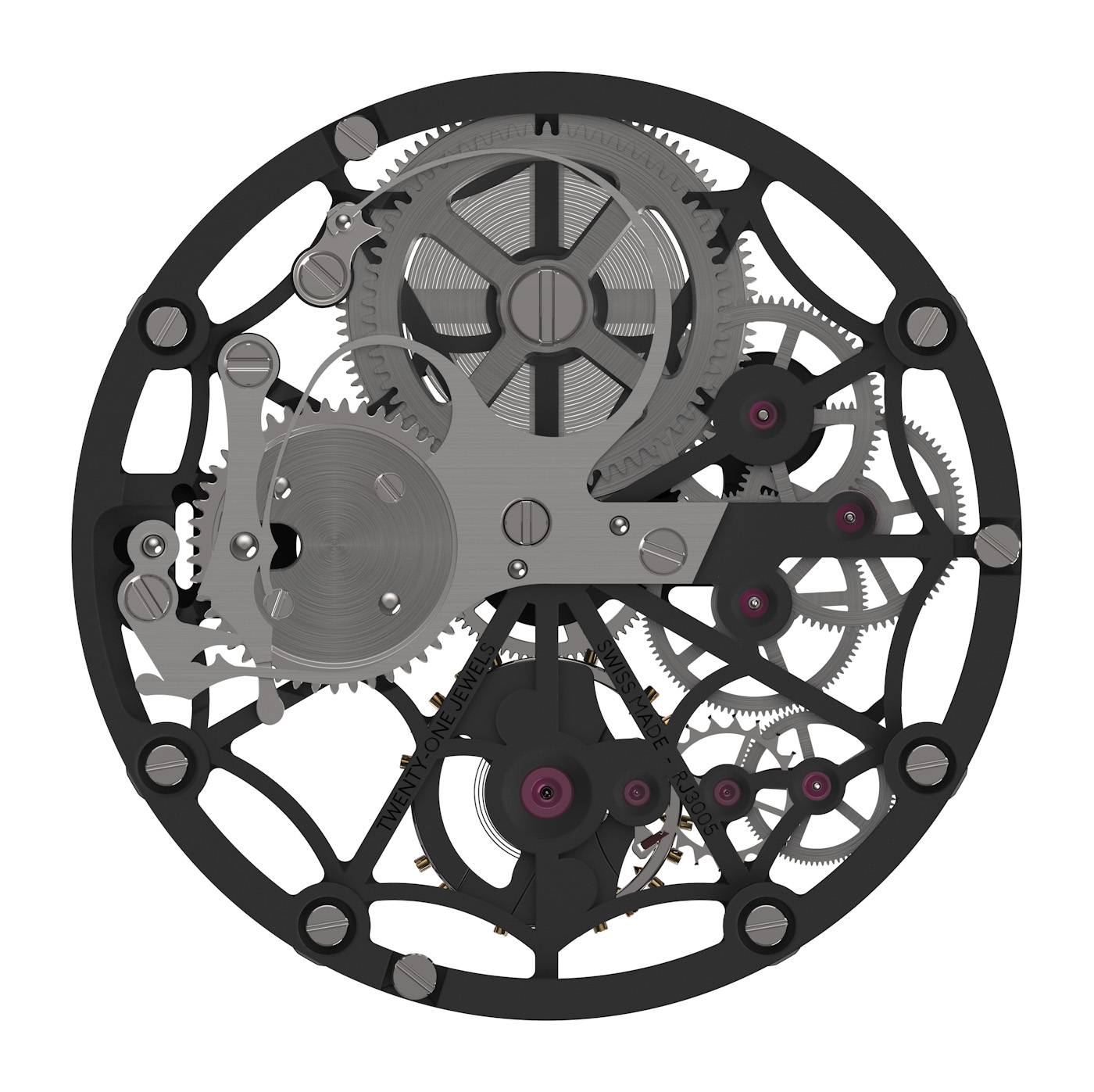 The movement inside the ARRAW Spider-Man is RJ’s in-house RJ-3005 hand-wound skeleton movement. This 21 jewel powerplant offers 48 hours of power reserve and a 28,800 bph beat rate. 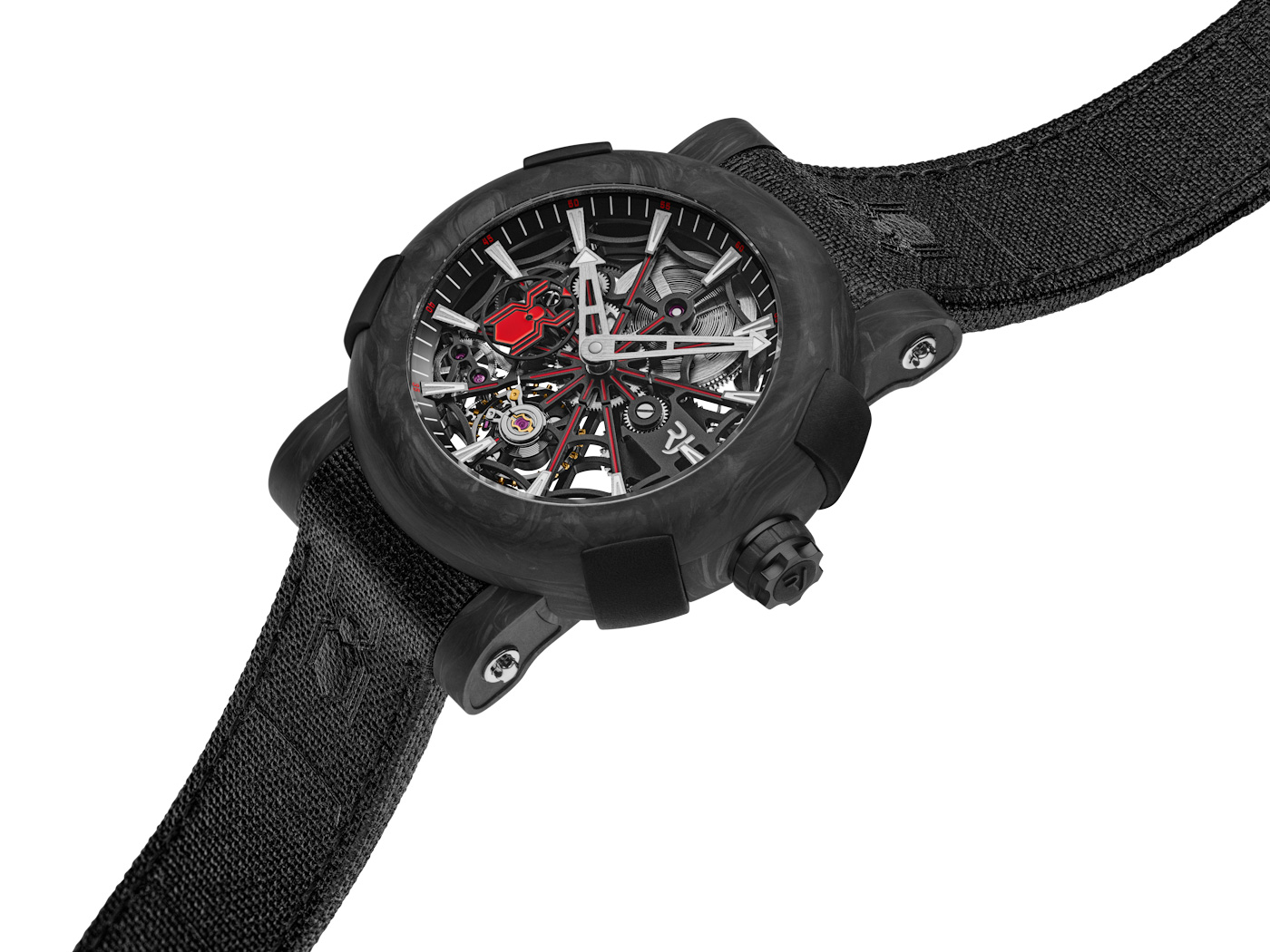 As is to be expected, the ARRAW Spider-Man is not quite as heavily limited as the tourbillon variants, with a production run of 100 units available now through authorized dealers and RJ’s website. MSRP for this piece is $20,000. 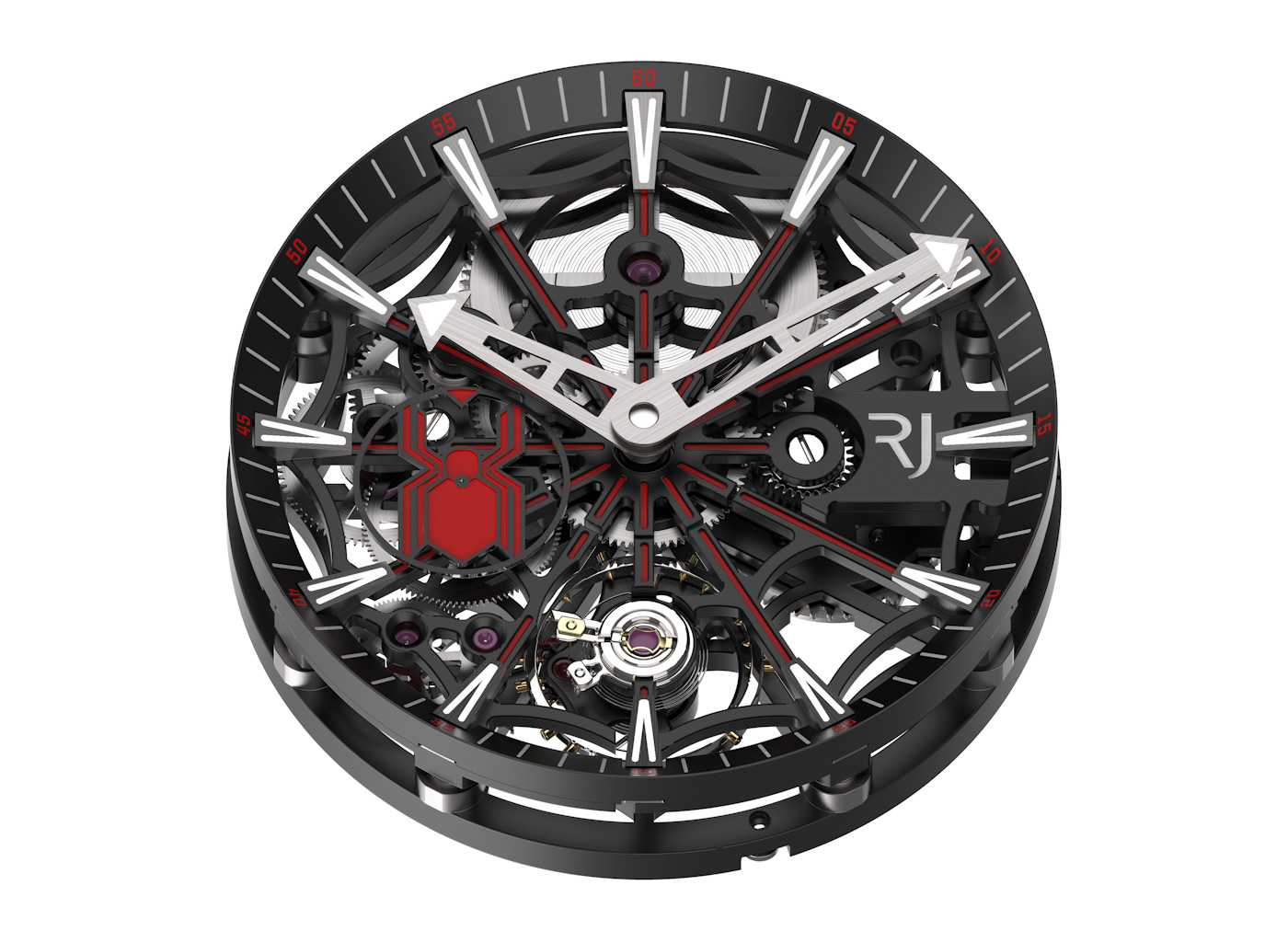 When looking at watches like RJ’s ARRAW Spider-Man series, it begs the question as to who the intended audience for these watches really is. They’re certainly not for everyone, but part of the joy of boutique watchmaking is a brand’s ability to create a timepiece that deliberately isn’t for everyone – in this case, may only be for ten people. With incredibly small production runs, there’s sure to be enough buyers who want a part of the fanciful and exciting tie-in here if for no other reason than the quality of watchmaking on display. For more information on these pieces, please visit the brand’s website.