If you dive, there’s a pretty good chance that you don’t do it in your own backyard — or even in your own local time zone, for that matter. So, it goes without saying that the added functionality of an extra time zone on a dive watch makes a whole hell of a lot of sense — it’s just a shame that there really aren’t that many of them out there. TAG Heuer seems to be doing its best to add to the mix with a new blue-dialed Aquaracer GMT (ref. WAY201T) equipped with a bi-colored aluminum 24-hour bezel. 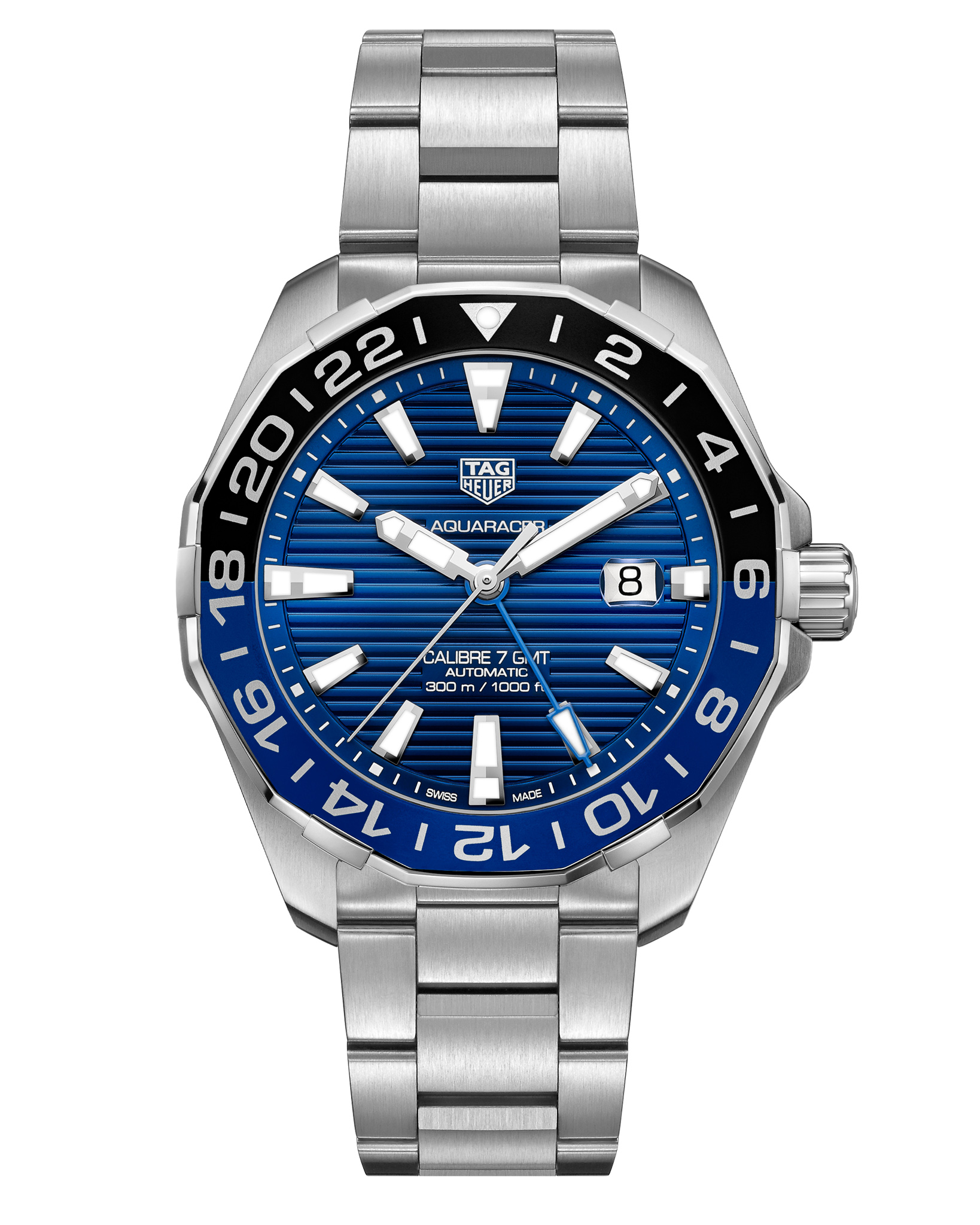 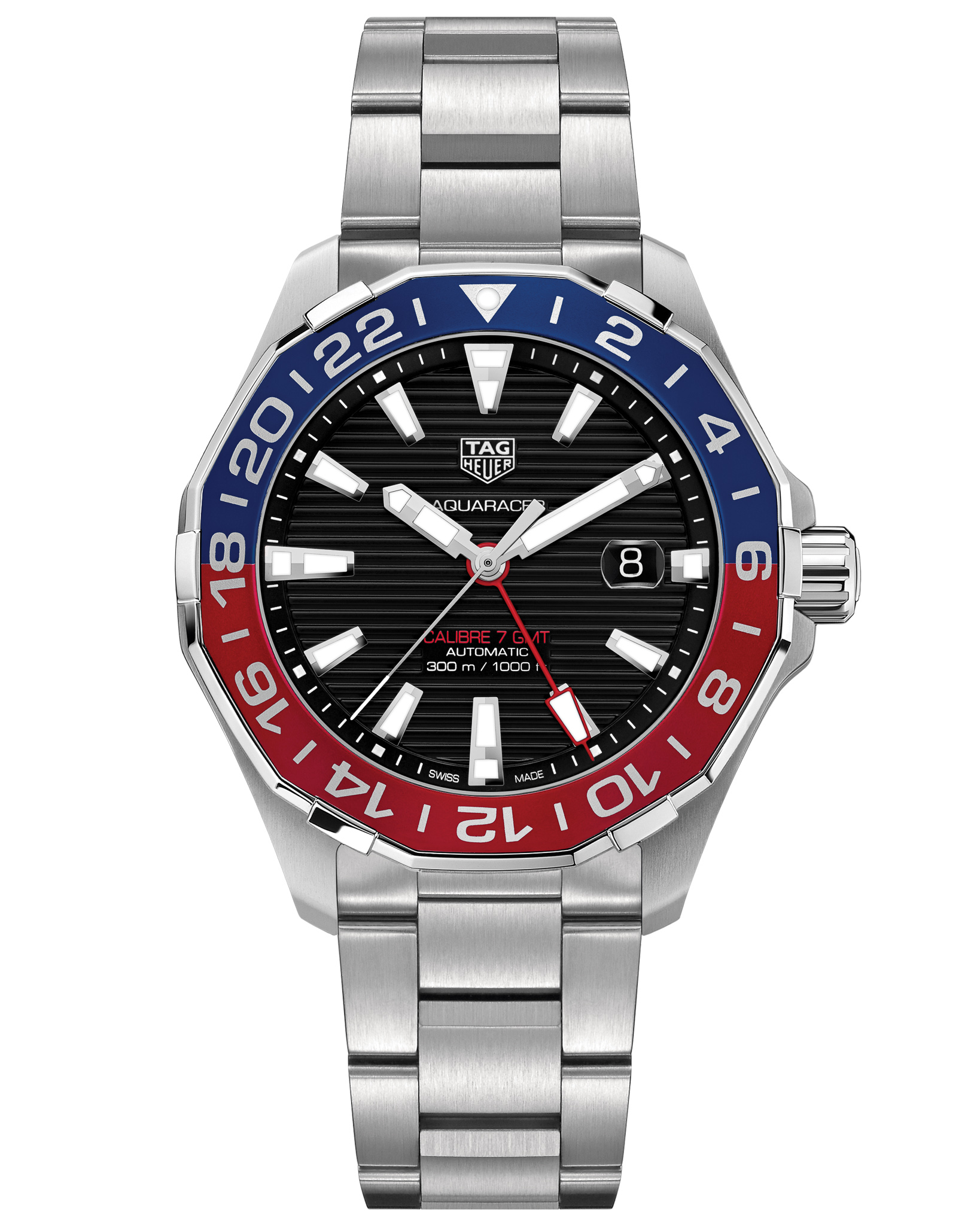 Unlike the Rolex GMT Master II, which unofficially coined this bi-color blue and black “Batman” color scheme, the Aquaracer is positioned as a true dive watch, offering three times the water resistance at 300 meters. It also differs from the GMT Master from a functional standpoint, as its Calibre 7 engine uses the traditional ETA 2892-A2 as a base — a movement best characterized as a “phone GMT,” which enables easy reading of an additional time zone of your choice, as the date and the 24-hour indicator can be quick-adjusted via the crown. This is especially handy for those of you conducting business between time zones via phone or Zoom during the global shelter-in-place mandate. However, a “true GMT” execution is what’s really ideal for travel, as the hour hand can be quickly adjusted independently from the rest of the watch’s functions — upon landing in a new time zone, for example. This particular execution is much less common, usually reserved for a pricing airspace (think Rolex, Omega, and Panerai) well above where TAG Heuer tends to operate. 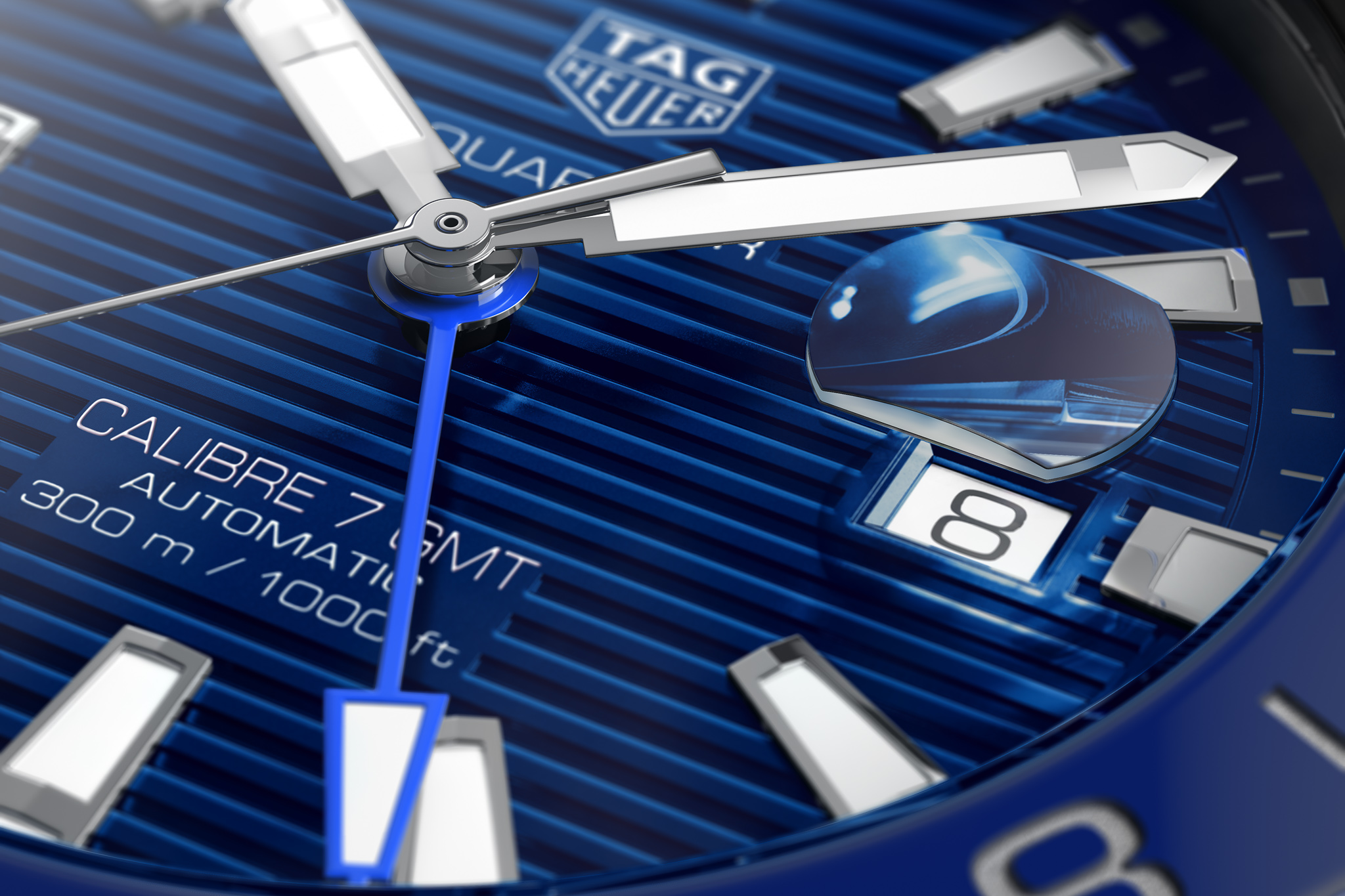 At 43mm and with a richly detailed blue dial, I’m pleased to see that TAG Heuer didn’t increase the case size of the already very bold Aquaracer to accommodate the added utility of the GMT. That said, it would have been nice to see a 24-hour index in the chapter ring on the outer edge of the dial, enabling the reading of three time zones simultaneously, but one of the hallmarks of the Aquaracer line has always been legibility, so I respect the decision to preserve as much of the dial’s visual identity as possible. As it stands, you can simply use the bezel to read a second time zone, function as an AM/PM indicator, or use as a rudimentary (albeit somewhat imprecise) timing device by using the pip at 12 o’clock as a cardinal marker. 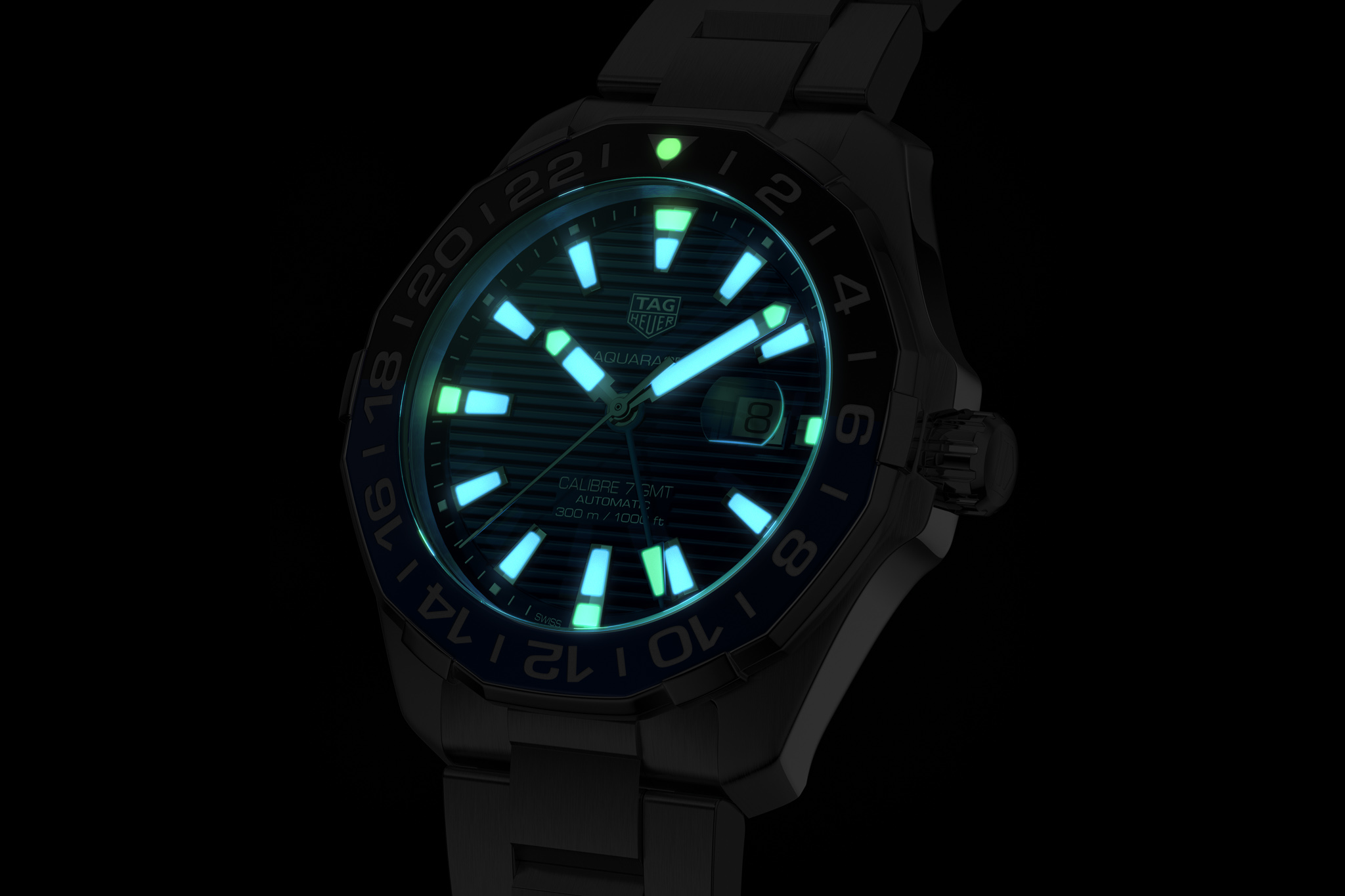 Now in its fourth generation, the long-running Aquaracer collection began its genesis in the early aughts as an avant-garde luxury sports watch, whose bold styling was married to a degree of capability that echoed the no-nonsense “Professional” line of dive watches from 1982. Over the course of those four generations, the platform has seen at least one major design revision every four or so years, though the overall aesthetic of the Aquaracer, with its distinctive rider-tabbed bezel and multi-dimensional dials, has more or less remained consistent. The collection has also seen a wide range of purpose-built complications over the years, ranging from highly specialized deep-sea divers, ana-digi quartz dive timers, regatta timers, and classic mechanical dive chronographs. But there had never been a GMT — until 2017, when the Aquaracer GMT (ref. WAY201F), with its bright two-toned “Pepsi” bezel, joined the fold. 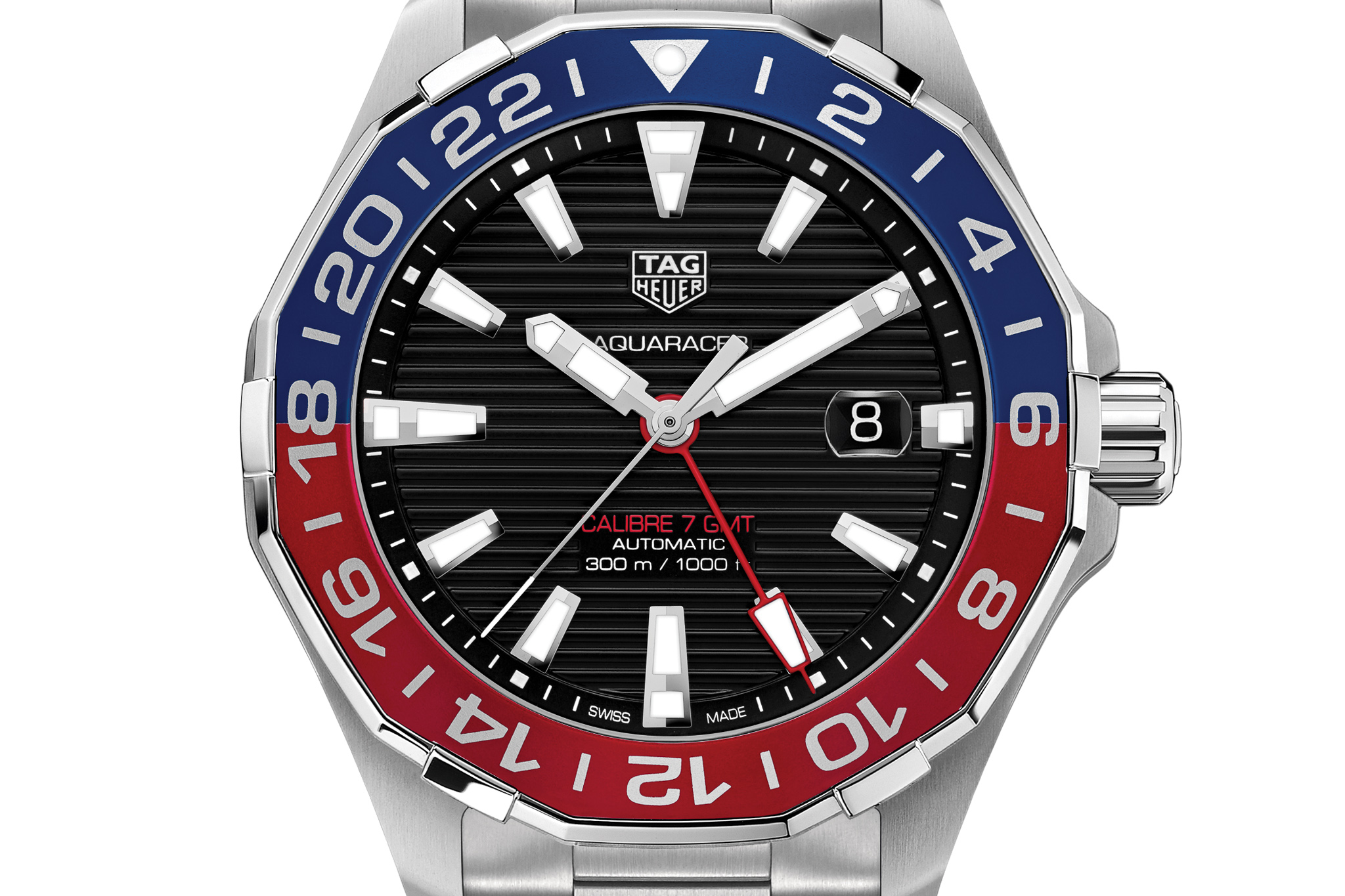 It’s great to see the Aquaracer start to shift back toward these niche, albeit more purposeful, designs, as the current generation of the watch has felt a little too much like a “lifestyle” object, placing a greater emphasis on bold colors and the use of more modern case or component materials — which was, without question, the creative influence of Jean-Claude Biver during his tenure as CEO. But I’d argue that a return to everyday utility while remaining bold and interesting-looking could strike just the right balance for the Aquaracer. 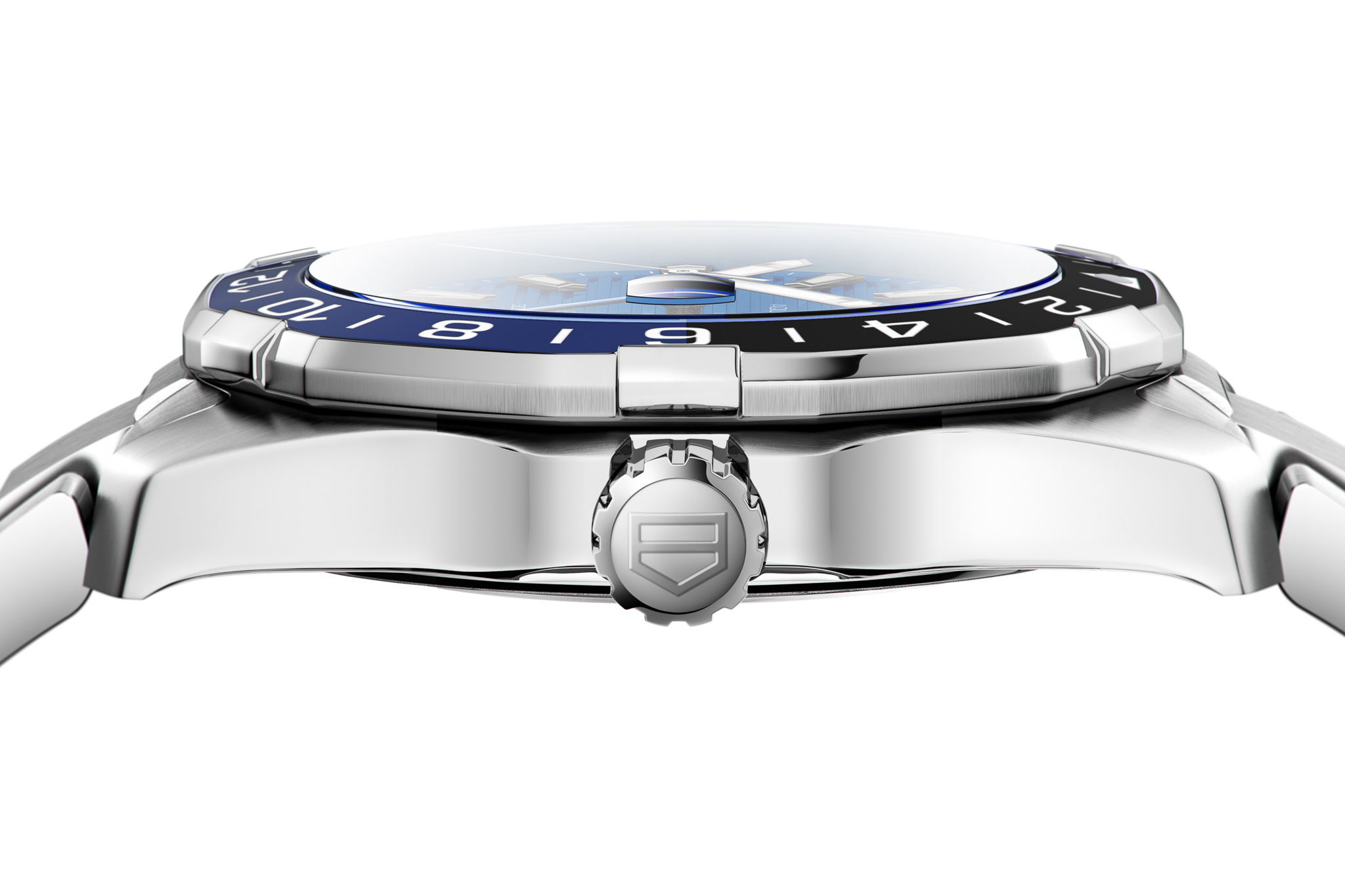 The TAG Heuer Aquaracer Calibre 7 GMT in the new blue dial is available now, and carries a retail price of $3,050 — a $400 premium on the standard Calibre 5 stainless steel Aquaracer. For more information, visit tagheuer.com. 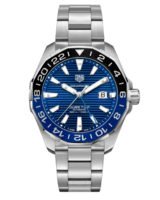