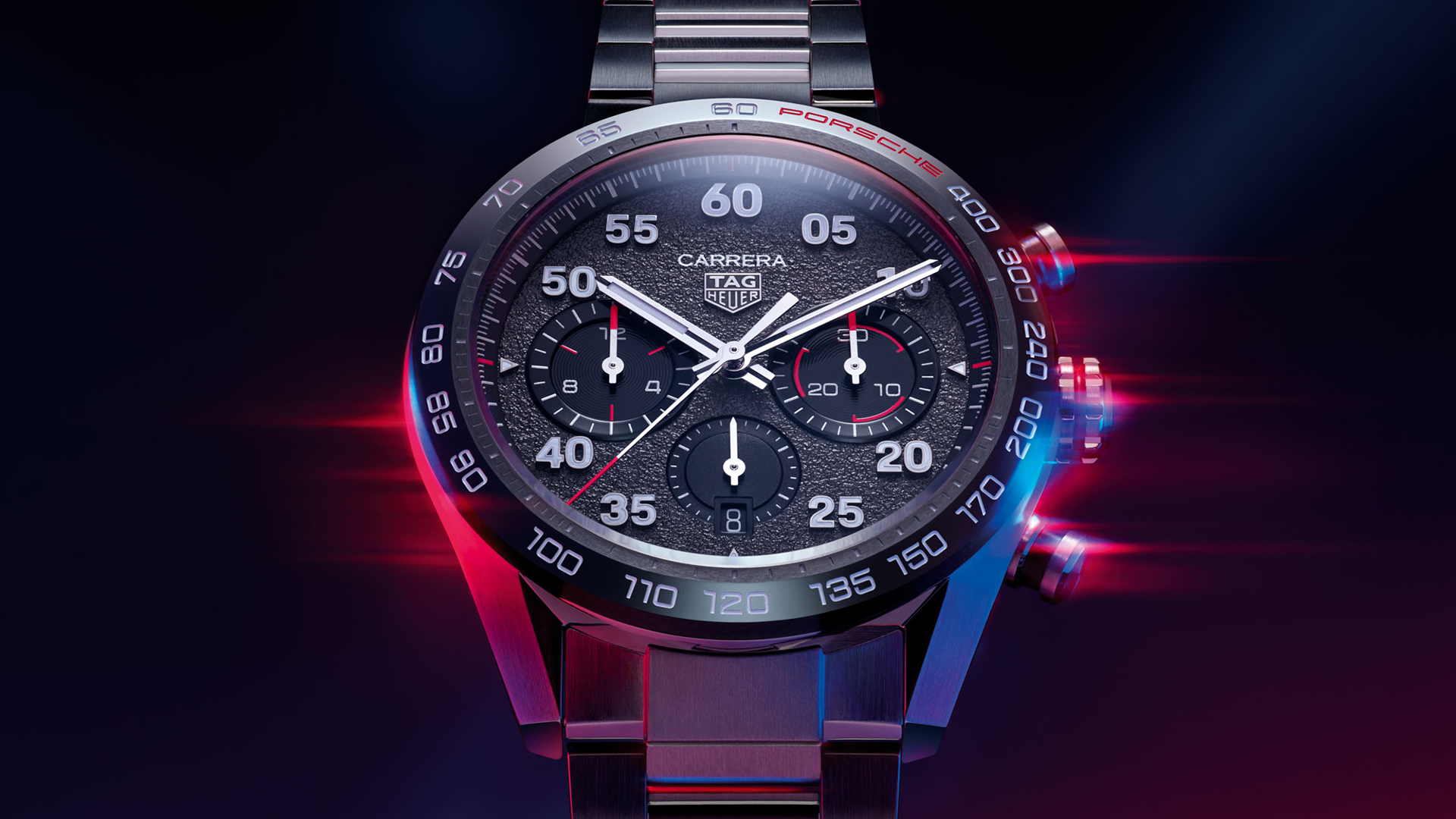 While watch brands have a long and varied history of partnerships with the automotive industry, there is perhaps no more famous or enduring bond than the one between TAG Heuer and Porsche. Both brands have shared the Carrera nameplate, inspired by the famously dangerous Carrera Panamericana road race in Mexico, since the introduction of the original Heuer Carrera in 1963. Thanks in large part to Swiss Formula 1 driver Jo Siffert, the two brands have been linked by motorsports many times since the 60’s, including an iconic star turn on the wrist of Steve McQueen in the 1971 endurance racing film, Le Mans. TAG Heuer’s former parent company, Techniques d’Avant Garde, partnered with Porsche to develop the TAG-Turbo engine that powered McLaren to three consecutive F1 championships in the mid-‘80s. For 2021, TAG Heuer is renewing and strengthening its long relationship with Porsche, announcing co-branding deals for the World Endurance Championship, Formula E, golf events, tennis championships, and more. To celebrate this stronger bond, TAG Heuer has announced a new special edition variant of the Carrera Sport Chronograph that blends design DNA from both TAG Heuer itself and the classic Porsche 911 sports car line. The new special-edition TAG Heuer Carrera Porsche Chronograph offers a surprisingly restrained take on a co-branded partnership, adding a handful of unique cues to the newly refreshed Carrera platform. 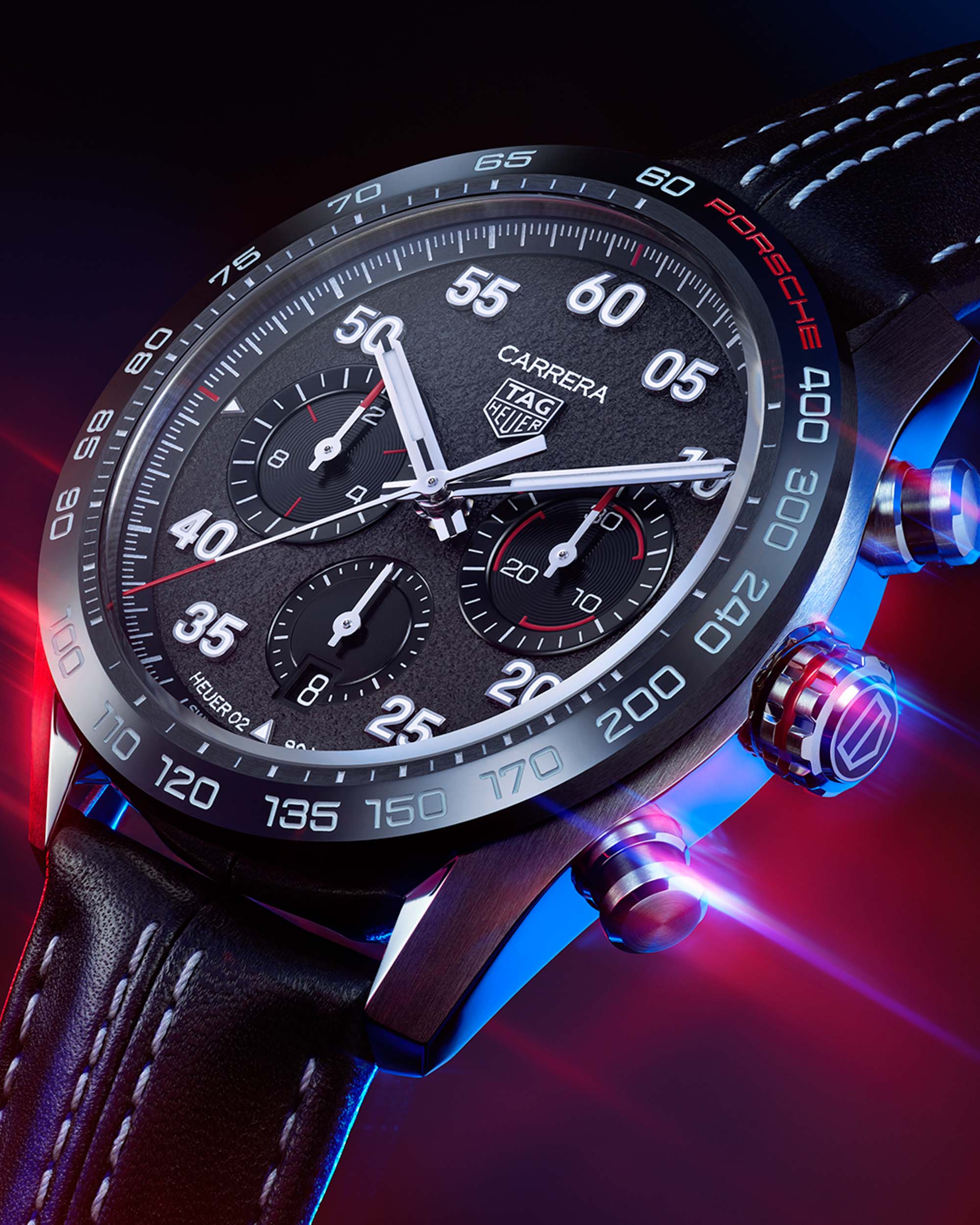 The 44mm stainless steel case of the TAG Heuer Carrera Porsche Chronograph is shared with the standard Carrera Sport Chronograph line, with the same short angular lugs, undercut case architecture, and unique modernist take on piston pushers. This futuristic take on a classic Heuer shape is accentuated by vivid red Porsche branding replacing the tachymeter text on the ceramic bezel. Although this takes up quite a bit of visual real estate, the integration of the logo into the usual layout of the design rather than placing a Porsche emblem somewhere on the dial feels considered and streamlined in initial images. The Carrera Porsche Chronograph also adds a pop of red to the screwdown crown in place of the usual black stripe. Like the standard model, this case offers a solid 100 meters of water resistance. 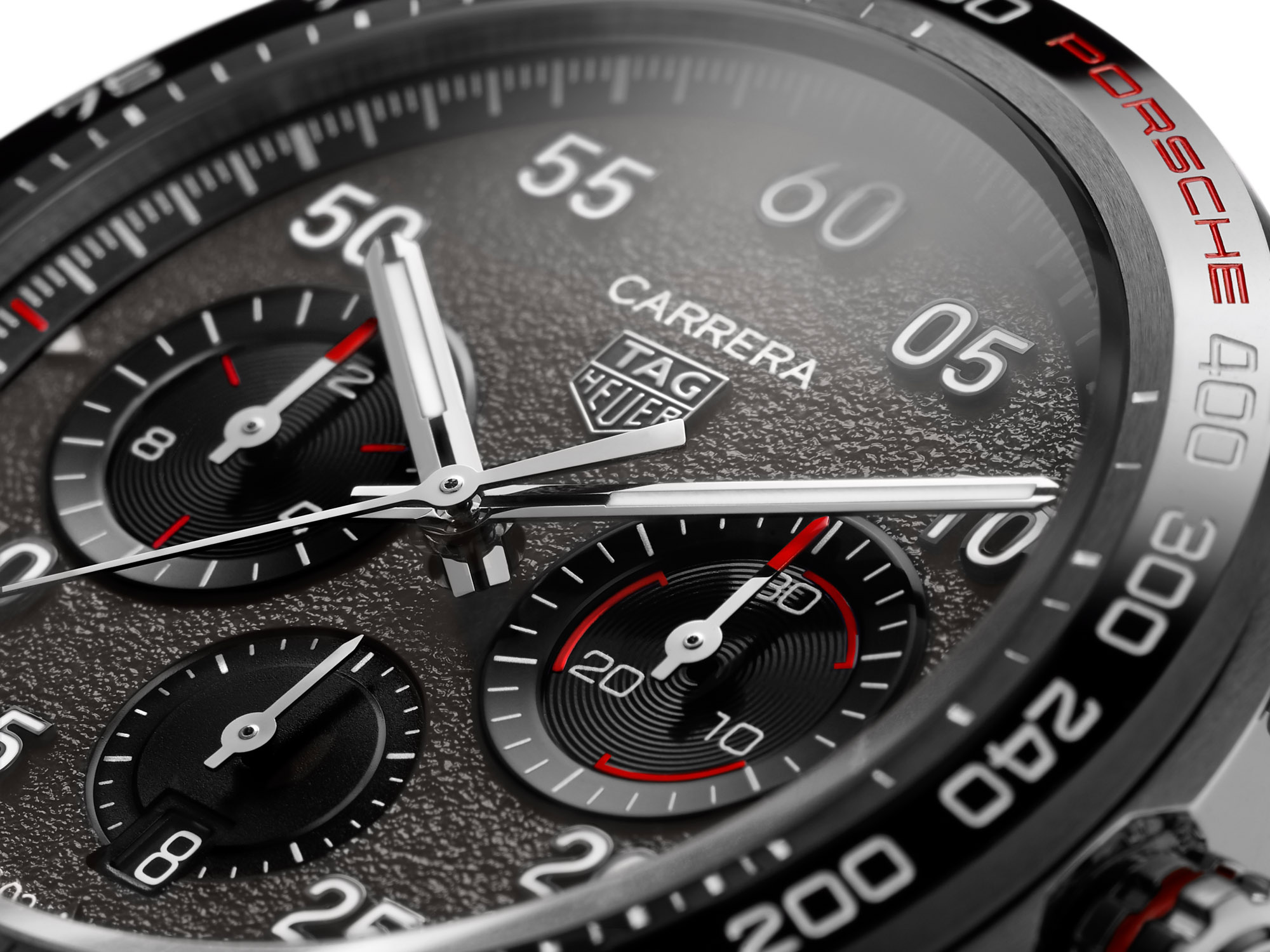 What immediately sets the TAG Heuer Carrera Porsche Chronograph apart from its stablemates is its dial texture. While this isn’t the first time in recent years the brand has tried to emulate asphalt in its dial finishes (that honor goes to the Formula 1 Indy 500 2020 Special Edition), the effect is markedly different here. Rather than the deep black of a freshly repaved racing circuit, the stony gray and rougher-grained finish here aims to capture the feel of a winding back road. It strikes a different emotional chord in this way, but the effect in images appears to be perhaps a bit too glossy to capture the weathered feel of a public road. The look is nonetheless striking, and the Carrera Porsche Chronograph adds several unique elements on top of this. This is the first in the current Carrera Sport Chronograph series to feature Arabic numerals rather than indices, and the smooth modern applied numerals here are inspired by the gauges of the current Porsche 911. The dial also adds accents in Porsche’s signature Guards Red to the subdials, outer seconds track, and the central chronograph seconds hand for a sporty punch. Interestingly, this is also the first time the current Carrera Sport Chronograph design has featured a black date wheel at 6 o’clock, giving the date display a more cohesive feel. 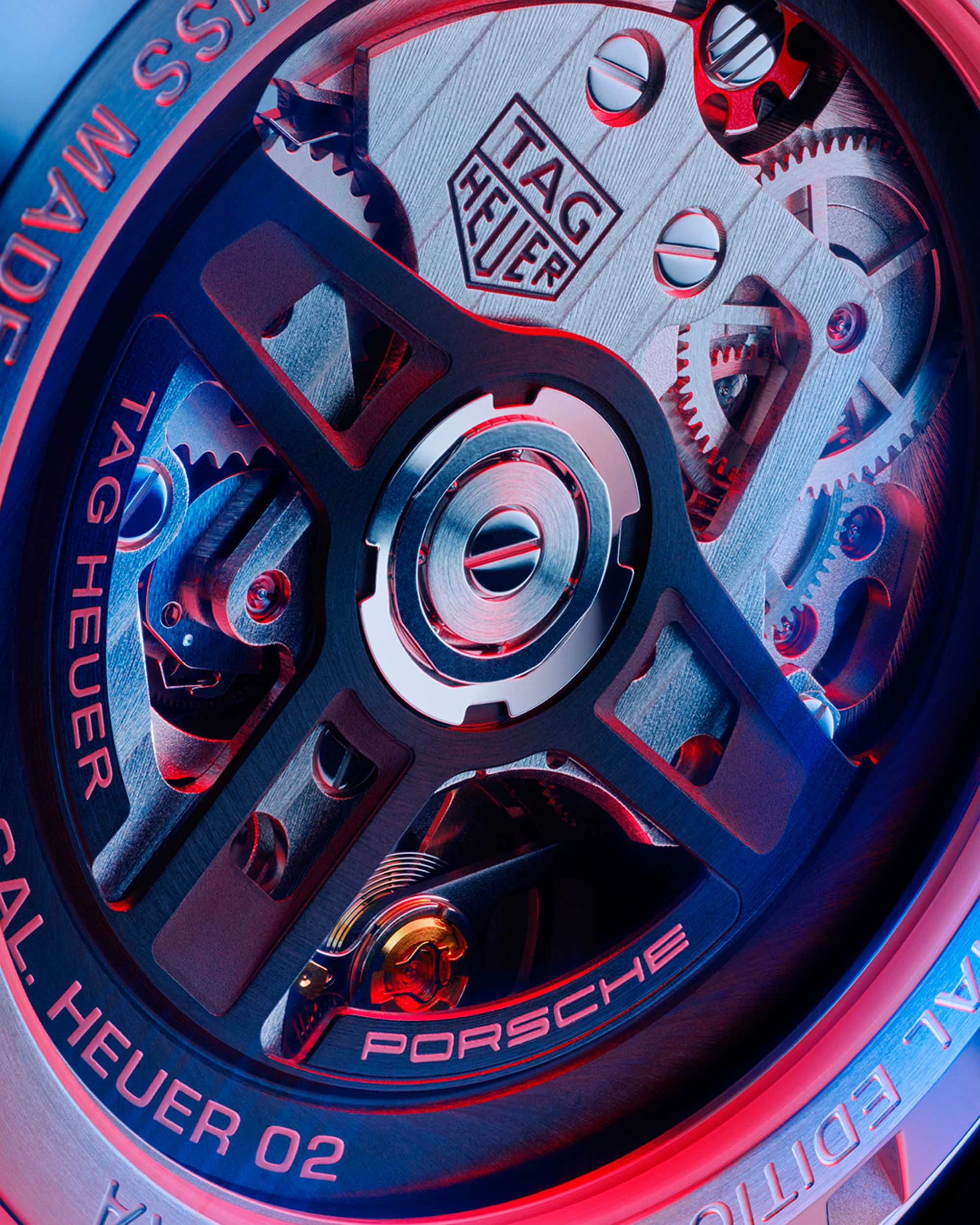 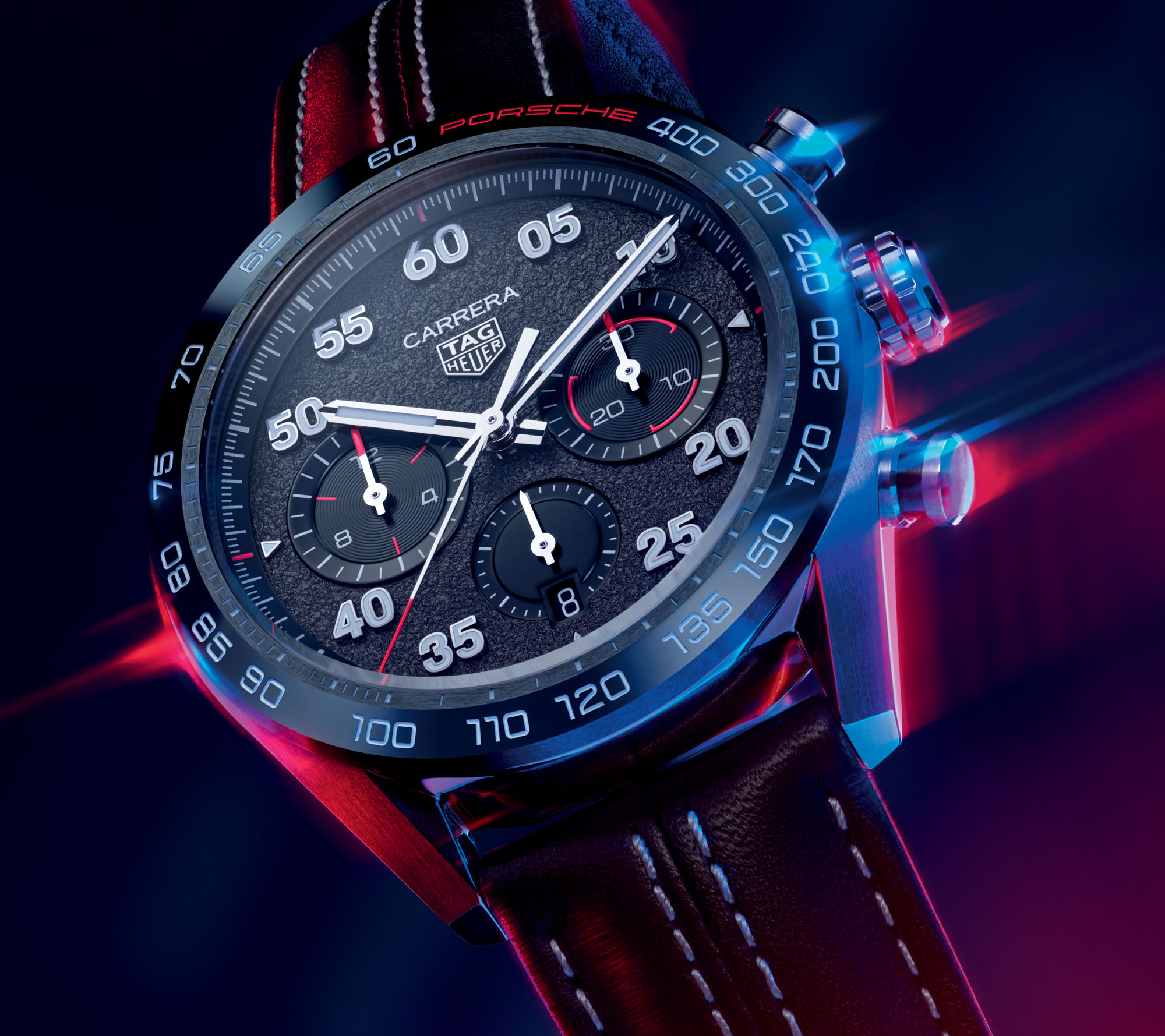 TAG Heuer offers the Carrera Porsche Chronograph with a pair of strap options. First up is its angular, modernist take on the H-link stainless steel bracelet with a push-button clasp. The second option is unique to this model, an embossed black calf-leather strap with a center seam and hand-sewn contrast stitching inspired by Porsche interiors. 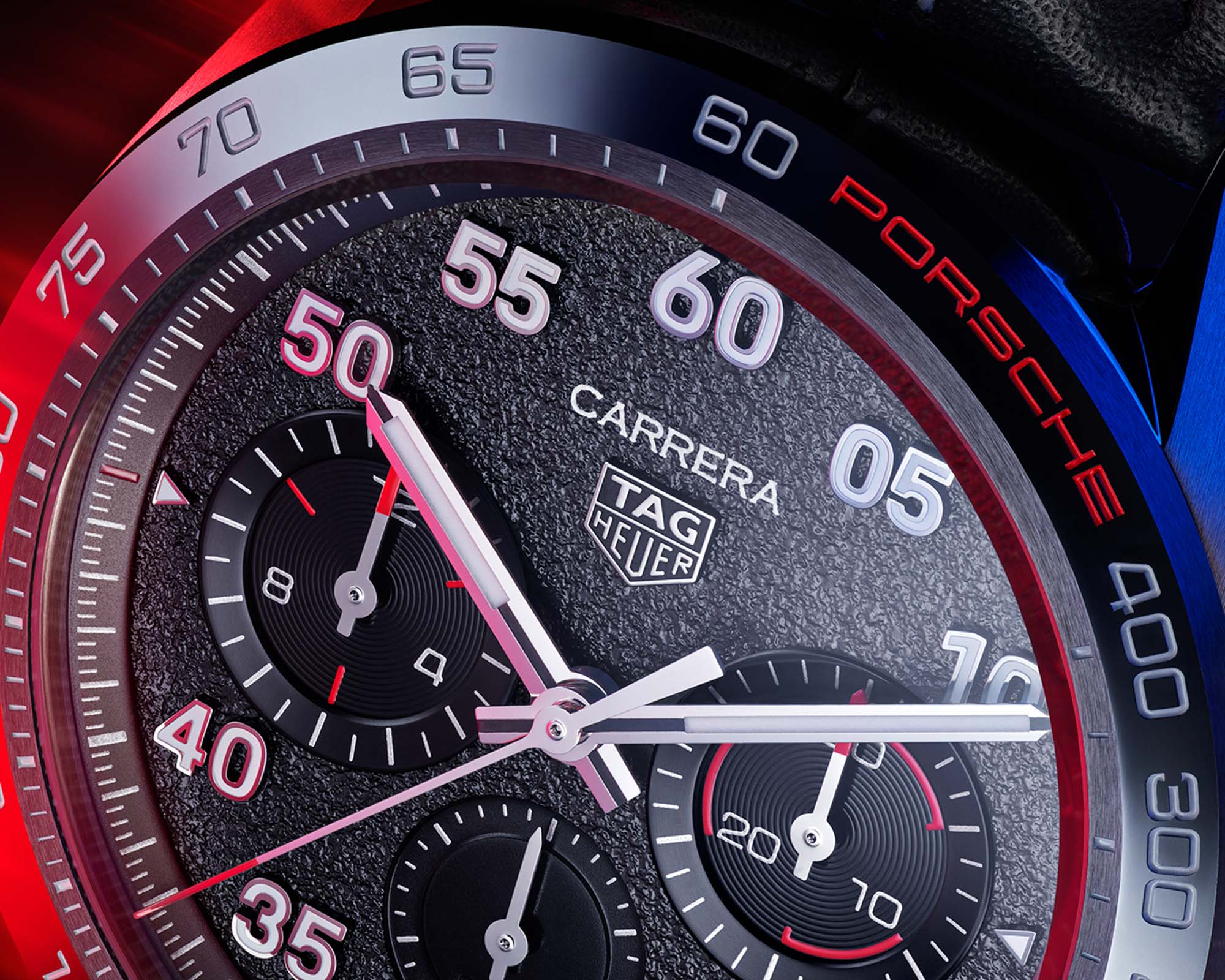