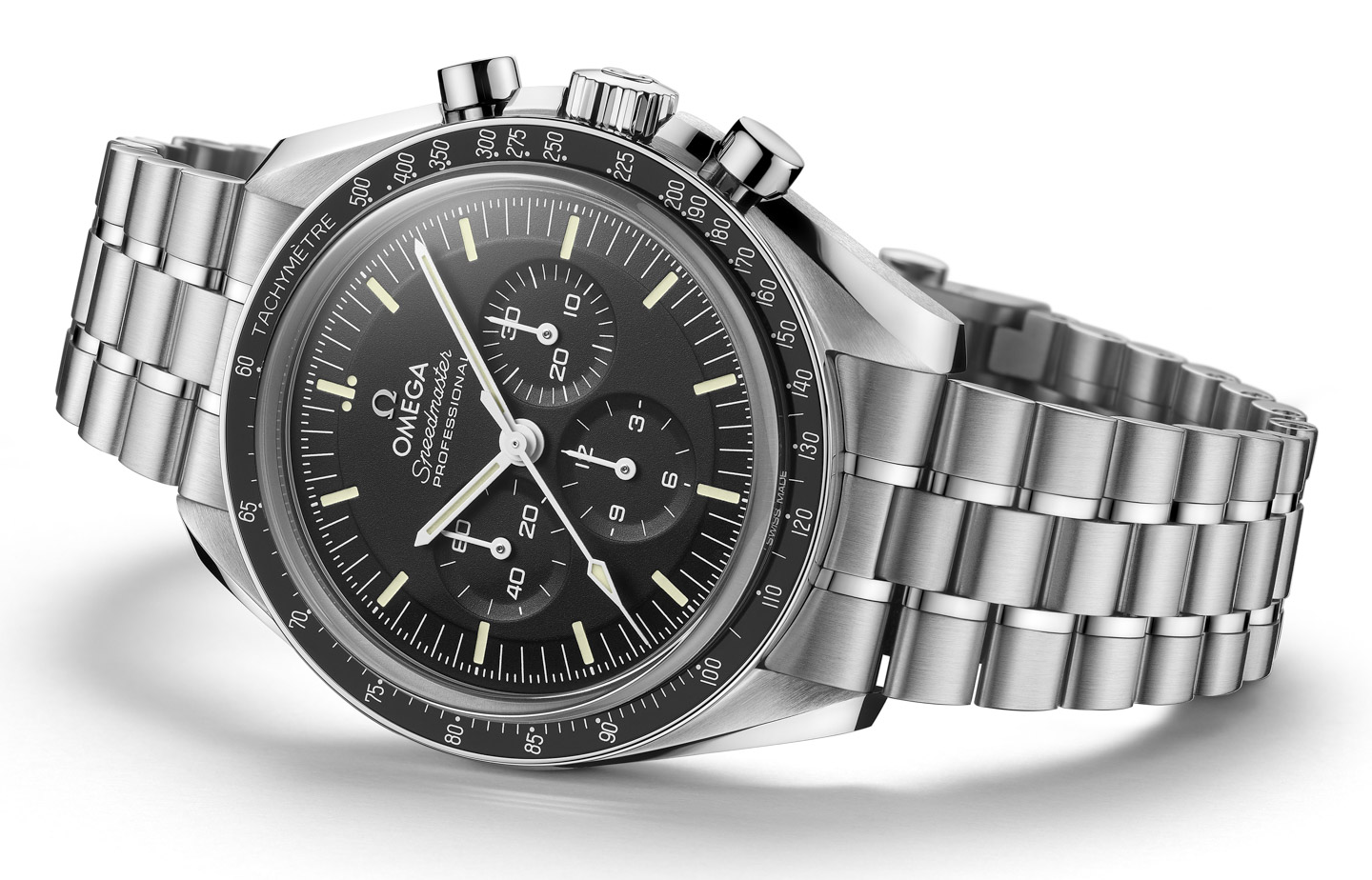 After what’s felt like years of speculation, followed by numerous false leads, and then an untimely delay on the heels of a global pandemic, the legendary Omega Speedmaster Professional Moonwatch has finally gotten the update we’ve all been waiting for: an updated Master Chronometer-certified engine, a new(ish) bracelet, and plenty of fan service in the dial, crystal and bezel for good measure – all without forsaking the single most important detail about the perennially handsome Speedmaster: it is once again flight-qualified by NASA “…for all human space missions.” Speedy collectors may now breathe a collective sigh of relief, this is the worthy successor you wanted. 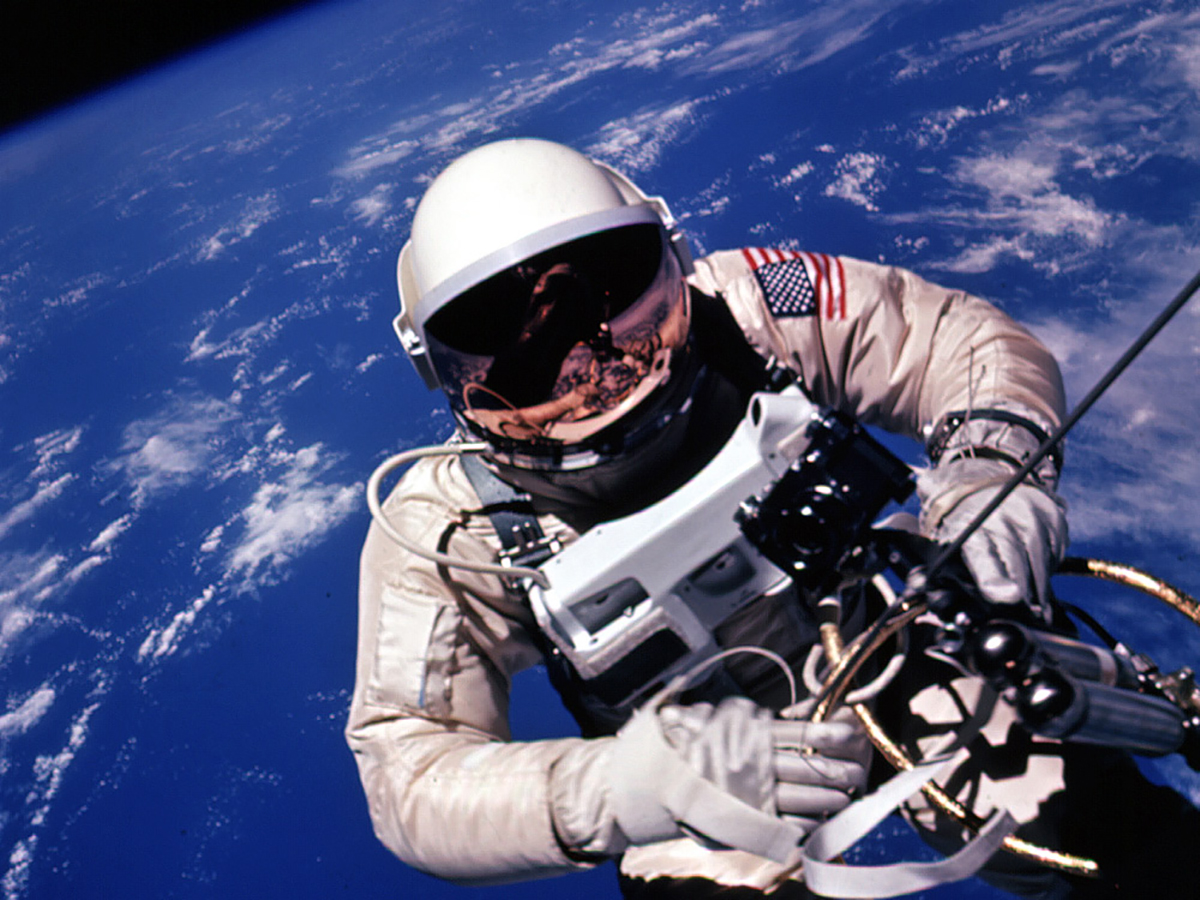 Of course, good looks alone never made watchmaking legends – and with the classic Speedy having rightfully earned its reputation from over 50 decades of space flight and exploration, filling those shoes would prove to be a great challenge indeed. But perhaps the delayed Speedy update in 2021 is right on time, with NASA having committed to putting the first woman, and the next man on the moon by 2024 for the Artemis project. It’s just the kind of ambition that would set the stage for an entirely new generation of space enthusiasm and a fresh vehicle for an entirely new generation of Speedmaster watches. Granted, Omega’s participation in Artemis remains officially unconfirmed, the caseback engraving makes it all but certain: the Speedmaster is going back to space. 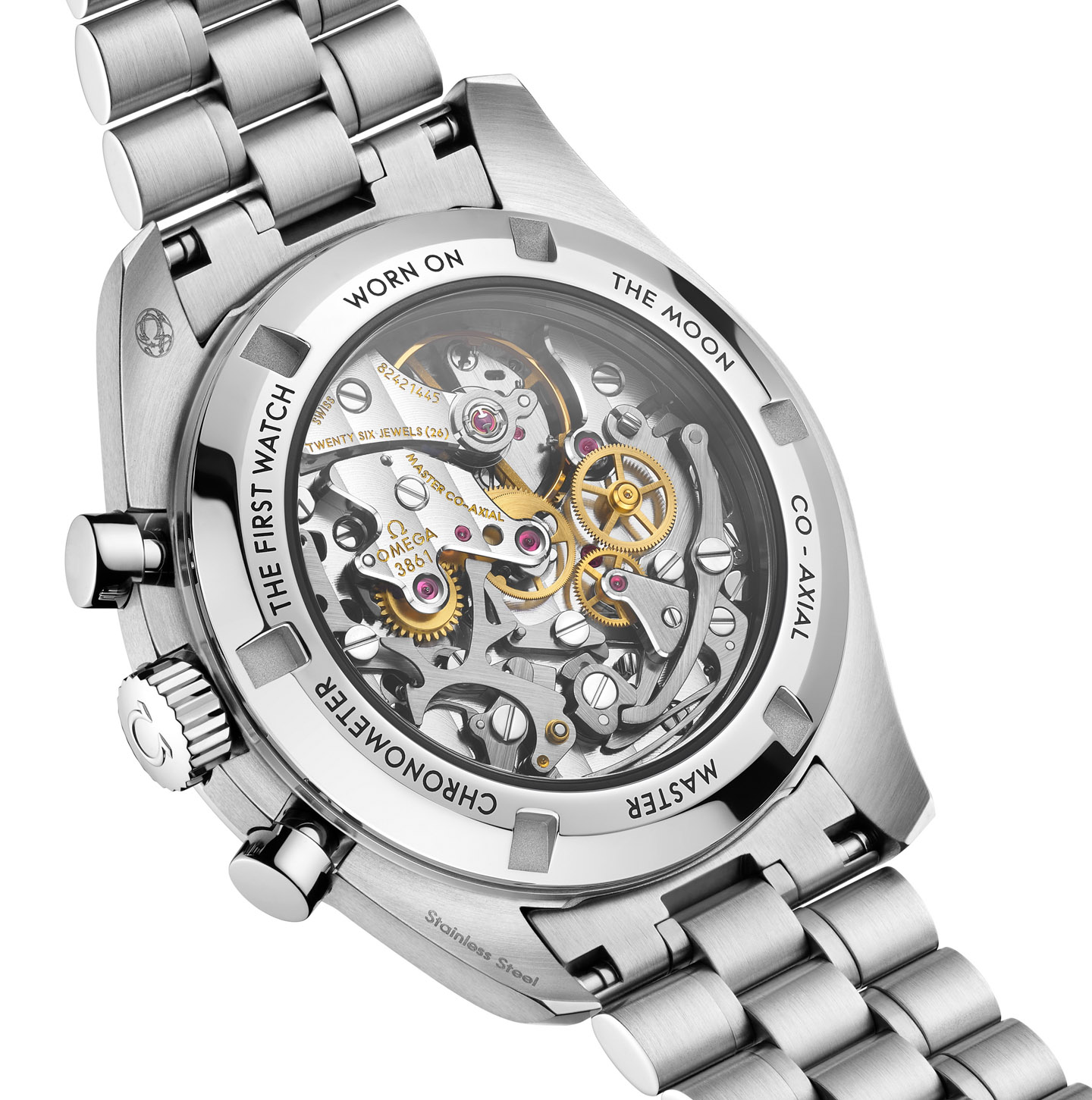 Say whatever you’d like about the Seamaster or the Constellation, the Speedmaster is without a doubt Omega’s most important collection – and the Moonwatch, its crown jewel. So it almost goes without saying that Omega would need to tread very carefully when it came time to bring its most treasured, most collected, and most fiercely debated property into the future. That’s perhaps what makes this update such a dramatically refreshing one – in order to fulfill the unenviable task of modernizing its most important reference without betraying the Speedy’s legions of fans, Omega did what any good brand should: they listened. 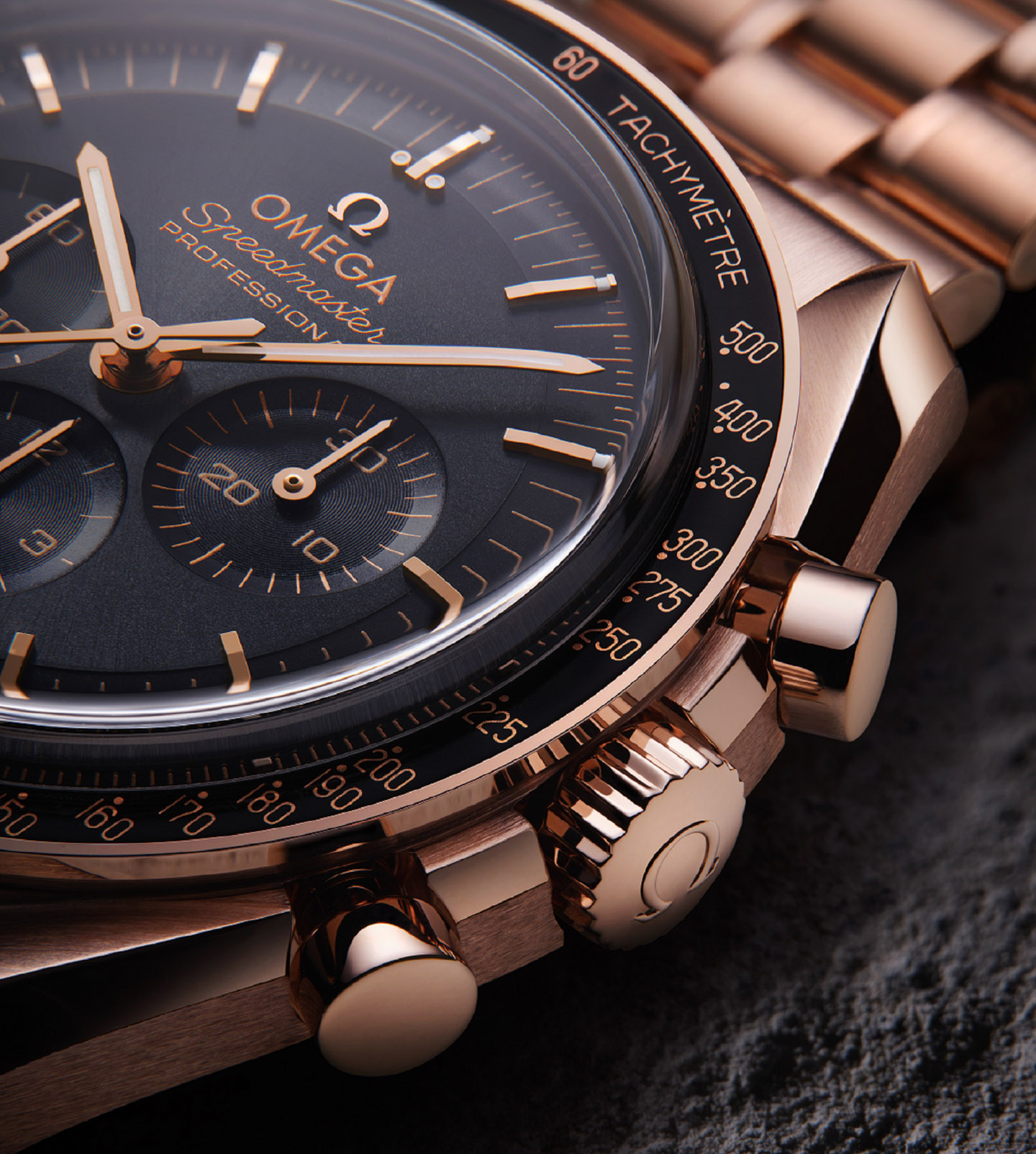 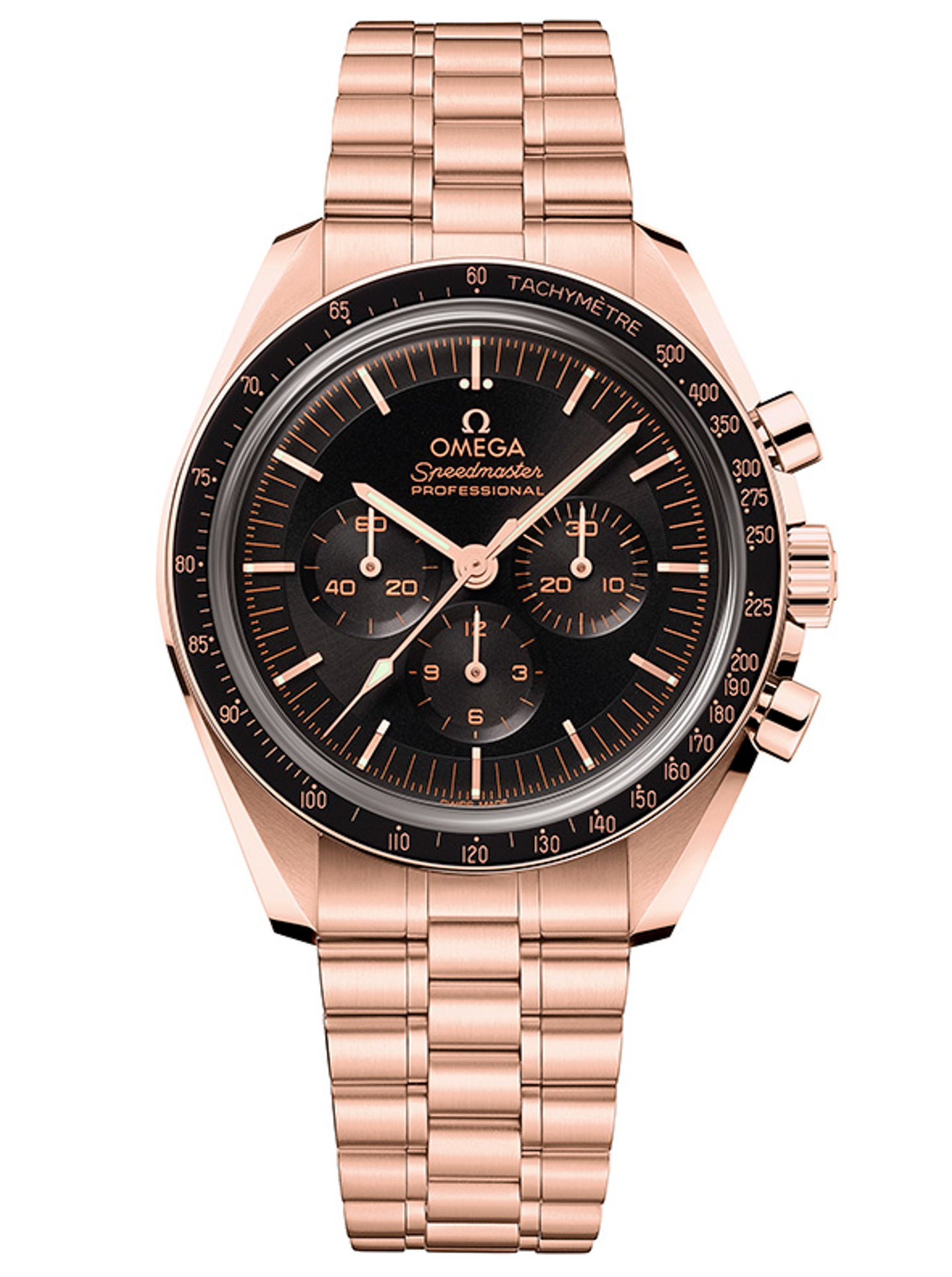 If these updates look vaguely familiar to Speedy die-hards, that’s because they should – think of the next-gen Moonwatch as a more fully realized mid-sixties ref. 105.012, built around a brushed & polished 42mm stainless steel case that’s replete with all the minute details that Speedmaster collectors go nuts for – stuff like a matte varnished step dial, “short and fat” pushers, a ‘teardrop’ style chronograph seconds hand (noteworthy for its pointed base) and beveled caseback with an engraved Hippocampus. The icing on the cake is the coveted “dot-over-ninety” (DON) aluminum tachymeter bezel – just as god and Ed White would have intended. 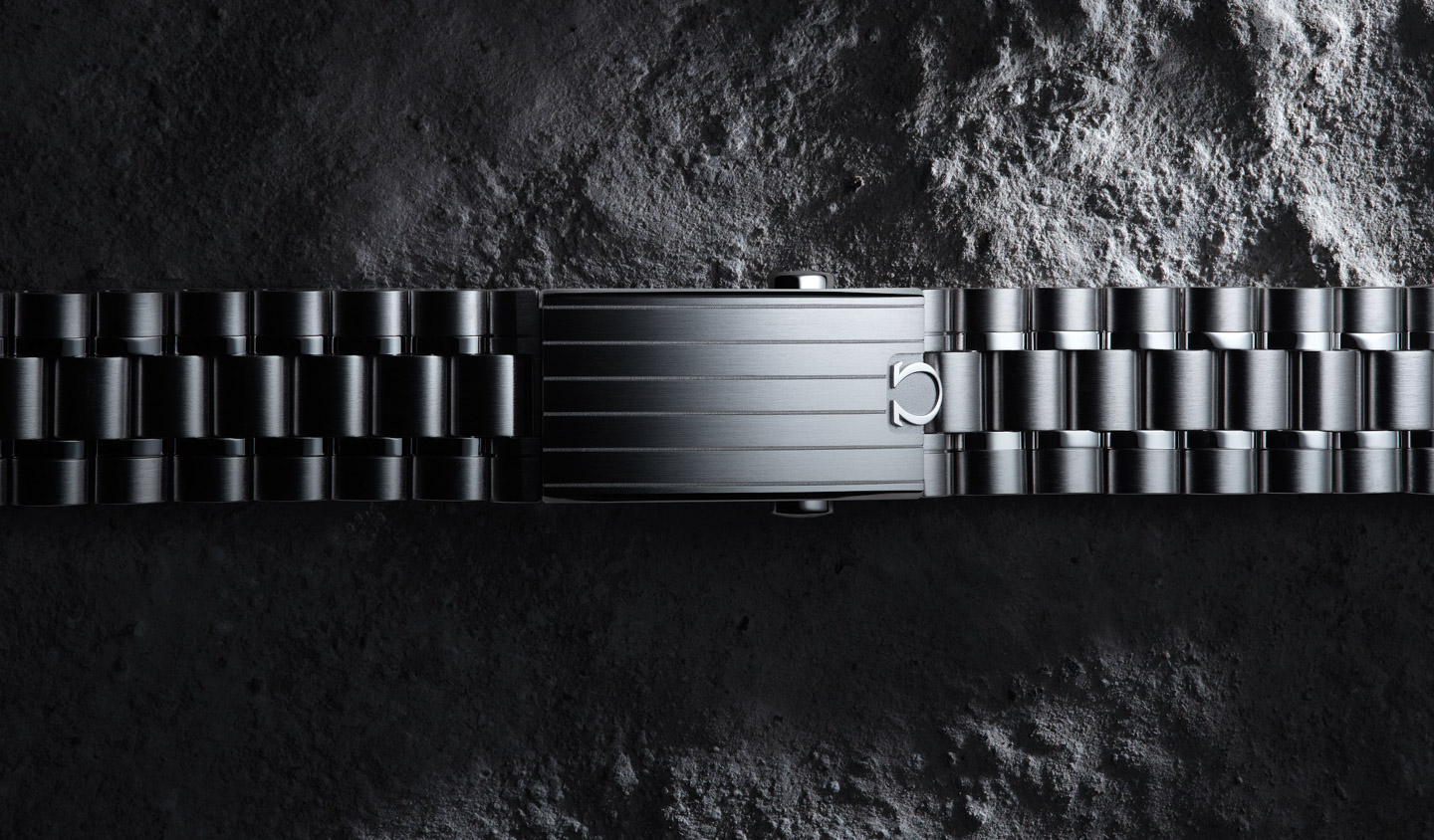 Last year’s Calibre 321 bombshell (also announced on the first ‘Speedy Tuesday’ of that year, for those keeping score in 2022) fueled plenty of fresh speculation – would the next-generation Moonwatch also be fitted with this movement? Would it cost over $10,000 as well? This new reference puts both of those concerns to rest, as Omega is outfitting with the new Moonwatch calibre 3861 – a handwound mechanical chronograph movement that we’ve already seen in two special edition modern Speedmasters: the 2019 Apollo 11 50th Anniversary in steel, and the more recently introduced 50th Anniversary Silver Snoopy edition – an endlessly charming release we called “the feel-good watch of 2020.” That leaves the 321 relegated to more premium special edition Speedmasters, and the 3861 as the new choice for space use. 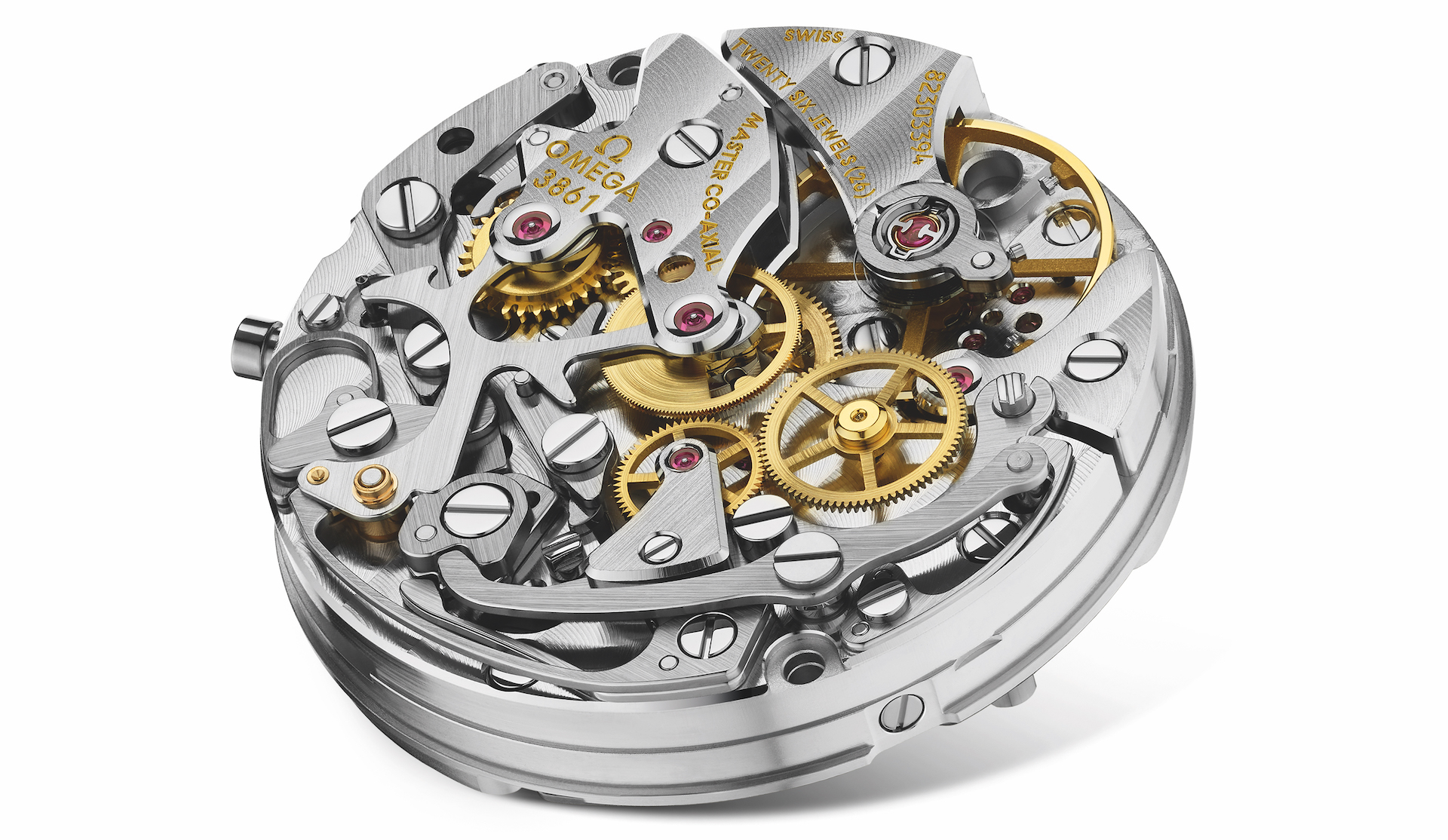 In both instances, cal. 3861 is noteworthy for its respect of the lineage of hand-wound Speedmaster movements, while mixing in a more artful degree of machine finishing as well as Omega’s latest movement technologies like a free-sprung balance with an anti-magnetic silicon hairspring (rated resistant to up to 15,000 Gauss). Perhaps more importantly though, the Moonwatch was the last modern Omega property not to be powered by a fully METAS-certified Master Chronometer movement – a detail which is now all but corrected. It would be safe to consider this a more than worthy successor to the long-running cal. 1861 depended upon by NASA – a movement which itself was direct descendant of the original cal. 321 powering the Speedmaster in its earliest space-faring days. 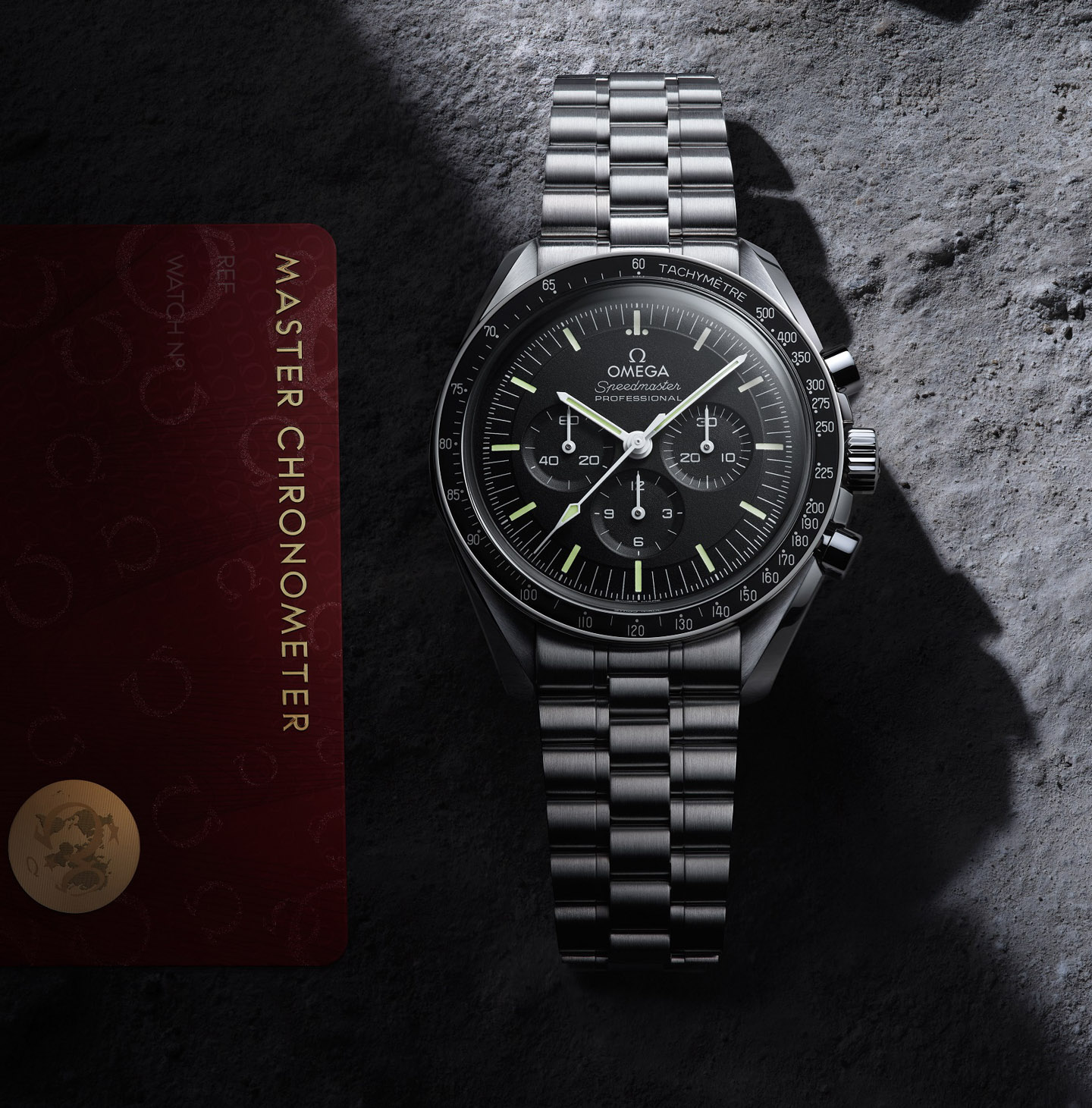 Perhaps the biggest visual indicator that this is not a cal. 1861 Speedmaster, is the bracelet – which is still the brushed three-link design (with the center links flanked by a row of polished outer rings) that should be familiar to any Speedmaster owner. But a closer look reveals the center link is now roughly the same size as the two outer links – a design trait shared by the 2019 Apollo 11 50th Anniversary Speedmaster in Moonshine gold, as well as on the late-sixties Speedmasters this reference paid homage to. 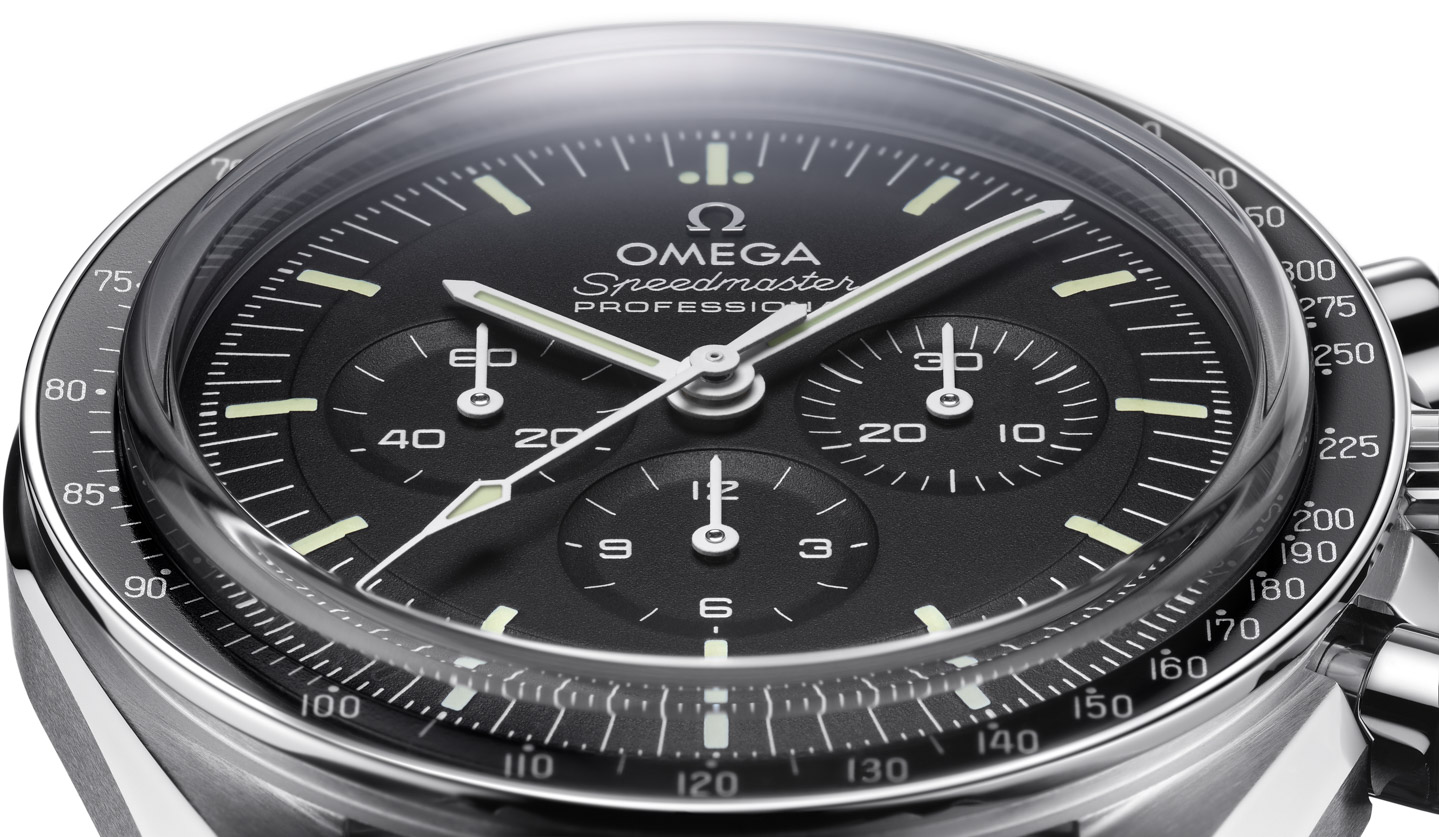 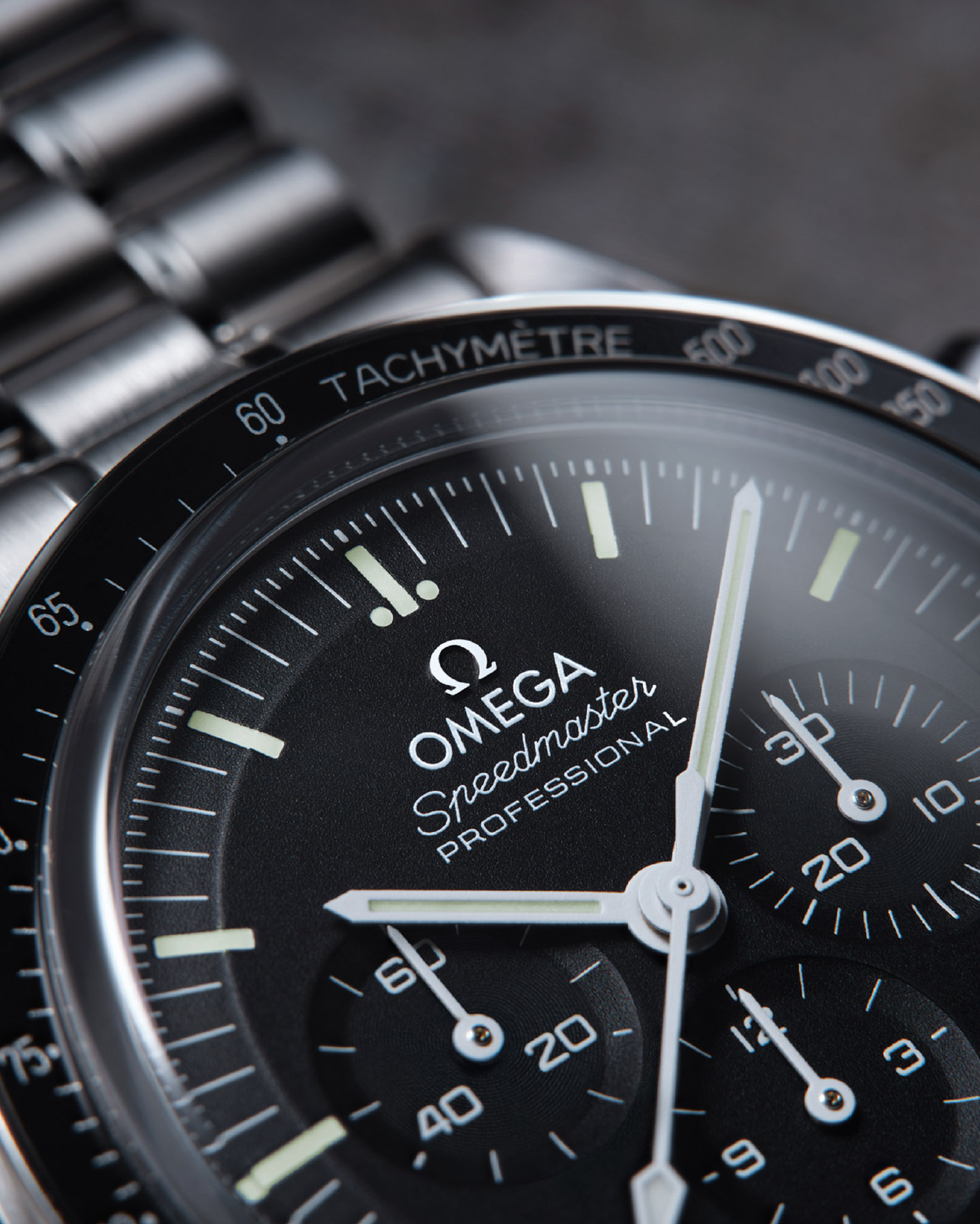 Like the outgoing core Speedmaster Professional variants, the next-gen Moonwatch is comprised of multiple key references, starting with ref. 310.30.42.50.01.001 which is the most classic of the updates, featuring a painted dial elements with a hesalite crystal (the original flight-qualified specification by NASA), and the new bracelet for a price of 5,800 CHF – a roughly 20% increase over the existing 1861 hesalite variant. That price jumps to 6,600 CHF for ref. 310.30.42.50.01.002 which is the slightly more luxe variant, characterized by applied logo & hour markers and a box sapphire crystal. Both references are also available for the first time sans bracelet, on Omega’s excellent nylon strap, for the starting prices of 5,500 CHF (hesalite ref. 310.32.42.50.01.001), and 6,300 CHF (sapphire ref. 310.32.42.50.01.002) respectively. Omega will also offer an all 18k Sedna (rose) or Canopus (white) gold versions which range in price from 22,800 CHF to 41,900 CHF. All variants are expected to be supplied with Omega’s impressive Speedmaster Professional Moonwatch presentation box and have a five year warranty. For more information on the new model, please visit omegawatches.com.