I am an unabashed fan of German watches. The function-first aesthetic, attention to detail, rugged reliability, and typically excellent value proposition of German watches make them an immediate go-to on my never-ending watch search. While brands like Sinn, Damasko, Mühle Glashütte, and Stowa tend to steal the spotlight when it comes to fliegers (pilot’s watches) and tool watches, Tutima has quietly been producing fantastic watches with its own unique design language that really should not be overlooked. For almost a century, this small Glashütte-based brand has produced everything from military flieger watches to sophisticated dress watches with in-house movements.

Yet Tutima always seems to fly under the radar, and I’ve been eager for the chance to spend some time with one. Luckily, that opportunity arrived in the form of the Tutima M2 Coastline. The M2 Coastline fits within the brand’s M2 line of pilot’s watches, which descend from the Tutima Military Chronograph released in 1984 and were worn by German Air Force pilots throughout the 1990s. Though the design of the coastline doesn’t scream “pilot’s watch,” its high legibility and robust design reflect its lineage. Coupled with 300m of water resistance, the Tutima M2 Coastline is pure German functionality with ample personality from a brand with a fascinating history. 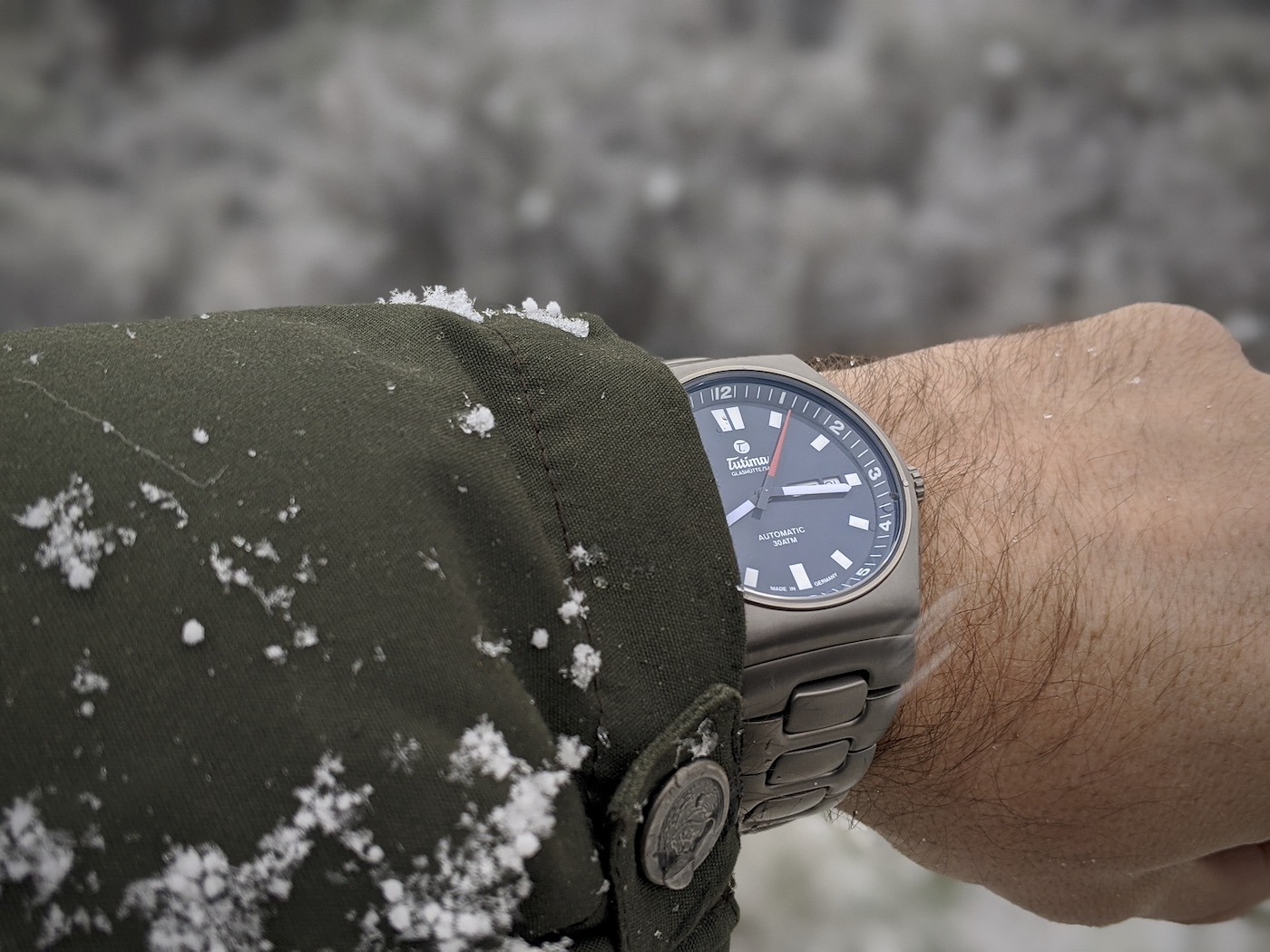 Heritage doesn’t matter to everyone, but Glashütte is steeped in it. The tiny German town, nestled close to the eastern border of Germany, has a population of around 7,000 inhabitants but is home to some of the biggest names in German watchmaking, including A. Lange & Sohne, Glashütte Original, Moritz Grossman, NOMOS, Mühle Glashütte, and Tutima. This idyllic Saxon town, nestled in the Eastern Ore mountains, was the historic home of German watchmaking, with some brands tracing their lineage in the town well over a century. Tutima’s story began when Dr. Ernst Kurtz formed the company in 1927; Tutima went on to produce watches in Glashütte for most of the next two decades until the factory was destroyed by Russian forces toward the close of World War II. The parts and machinery were taken as war reparations by the Russians and moved to Moscow. Dr. Kurtz moved to West Germany before the end of the war but restarted the Tutima brand from scratch in northwest Germany. It wasn’t until the Iron Curtain fell that Tutima was able to consider a move back to its historic home, finally completing the transition to Glashütte in 2011. The return to Glashütte also allowed Tutima to regain use of the “Made in Glashütte” classification, for which 50% of the value of the watch must be produced in Glashütte. Tutima remains a family-owned and -operated business to this day. 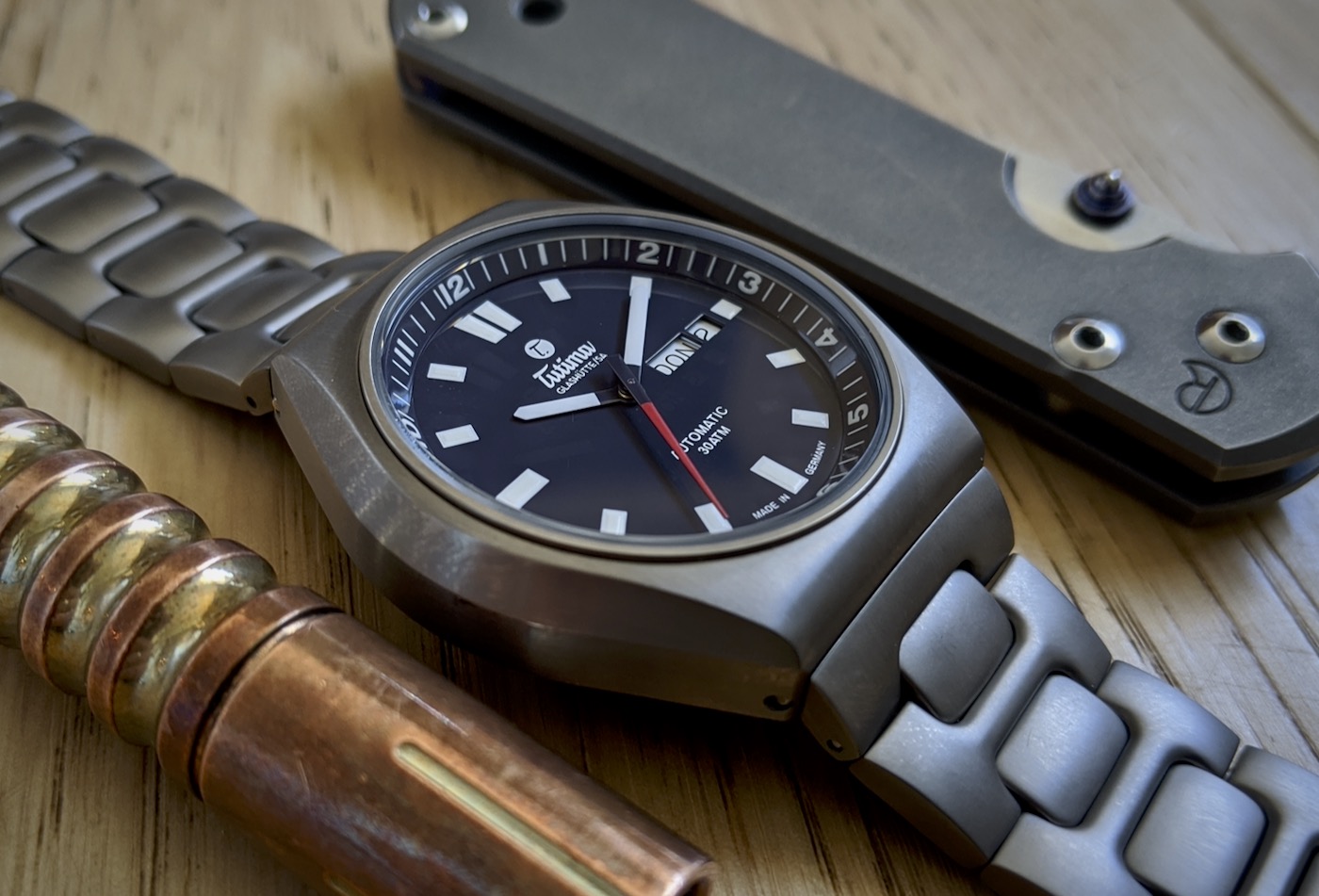 I first learned of Tutima watches when I came across the Tutima Pacific 670 — a long-discontinued, svelte, 40mm diver with hidden lugs produced for a short time around 2010. I loved the case shape, hidden lugs, steel bezel, day-date function, and the clearly German design. I’m still enamored of that watch and have vowed to track down a quality example. Over the years, I’ve spent more hours than I care to admit admiring everything from Tutima’s older Lémania-based military chronographs to Tutima’s contemporary fliegers. Despite my fascination with this small Glashütte brand, until I received the Tutima M2 Coastline in the mail, I’d never had a chance to try a Tutima on the wrist. When I slipped on the Coastline, I was relieved to learn that my interest in the brand was well-founded. The Tutima M2 Coastline wears beautifully on the wrist and captures all the charm I admire in the brand’s design. Let’s get down to the details. 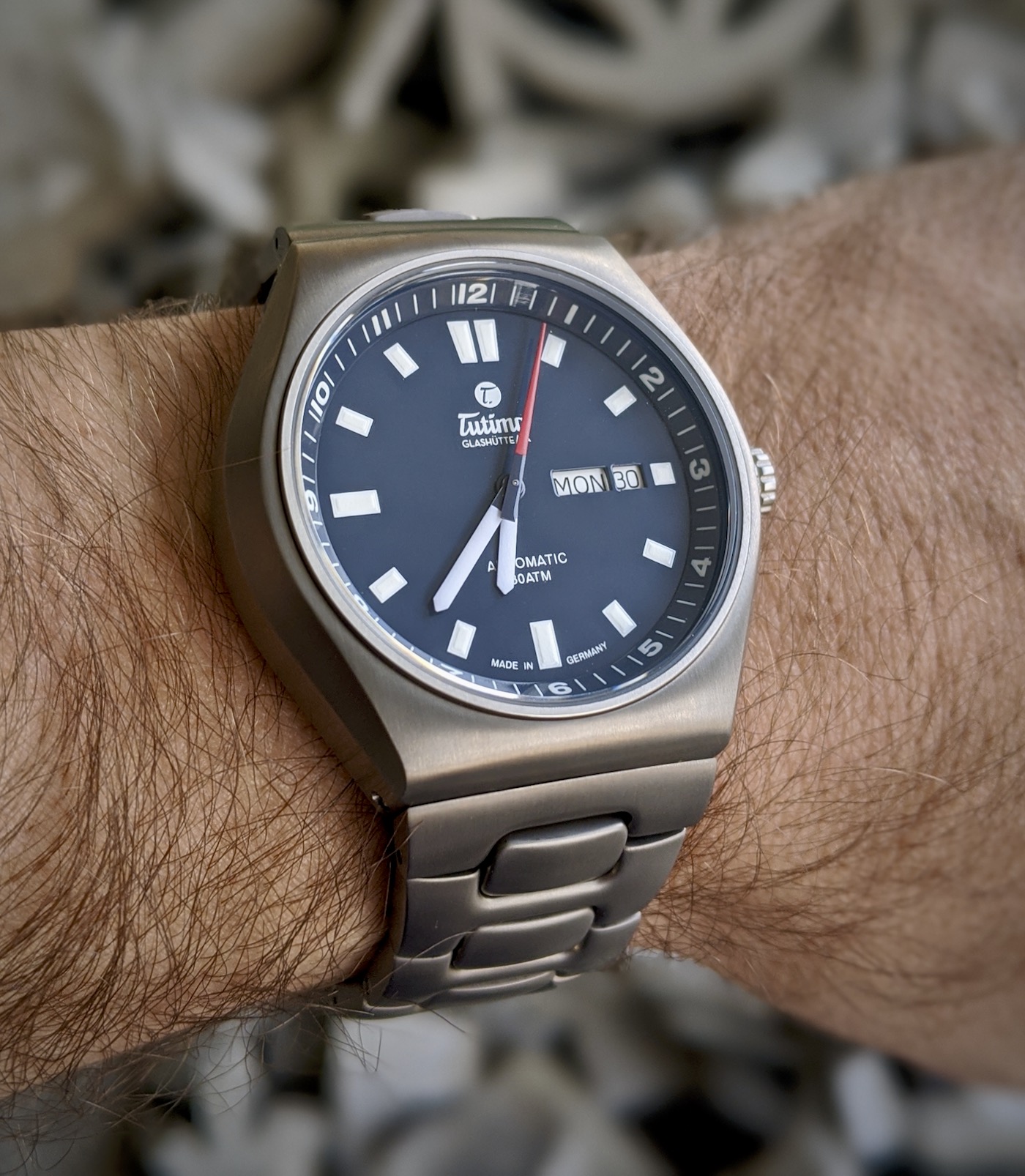 In reviews, we often state that you can’t judge how a watch will wear based off dimensions alone. This is especially true if you’re basing your judgment solely on the width of the watch. On paper, a 43mm three-hand watch seems much too large for my 6.75” wrist. Once on wrist, however, it wears much smaller and fits exceptionally well. The watch wears smaller than its dimensions suggest in large part because of the hidden lugs that result in a super-short ~44mm lug-to-lug distance, avoiding any issues of lug overhang. In addition, the curvaceous slopes and lines of the tonneau case perform a bit of optical trickery, resulting in a watch that I would say wears more like a 40-41mm watch. That said, the 12.9mm height and short lugs do make the watch look a bit portly in profile and, like most of us will be when we finally emerge from the COVID-19 lockdown, it could stand to lose a little heft around the middle. 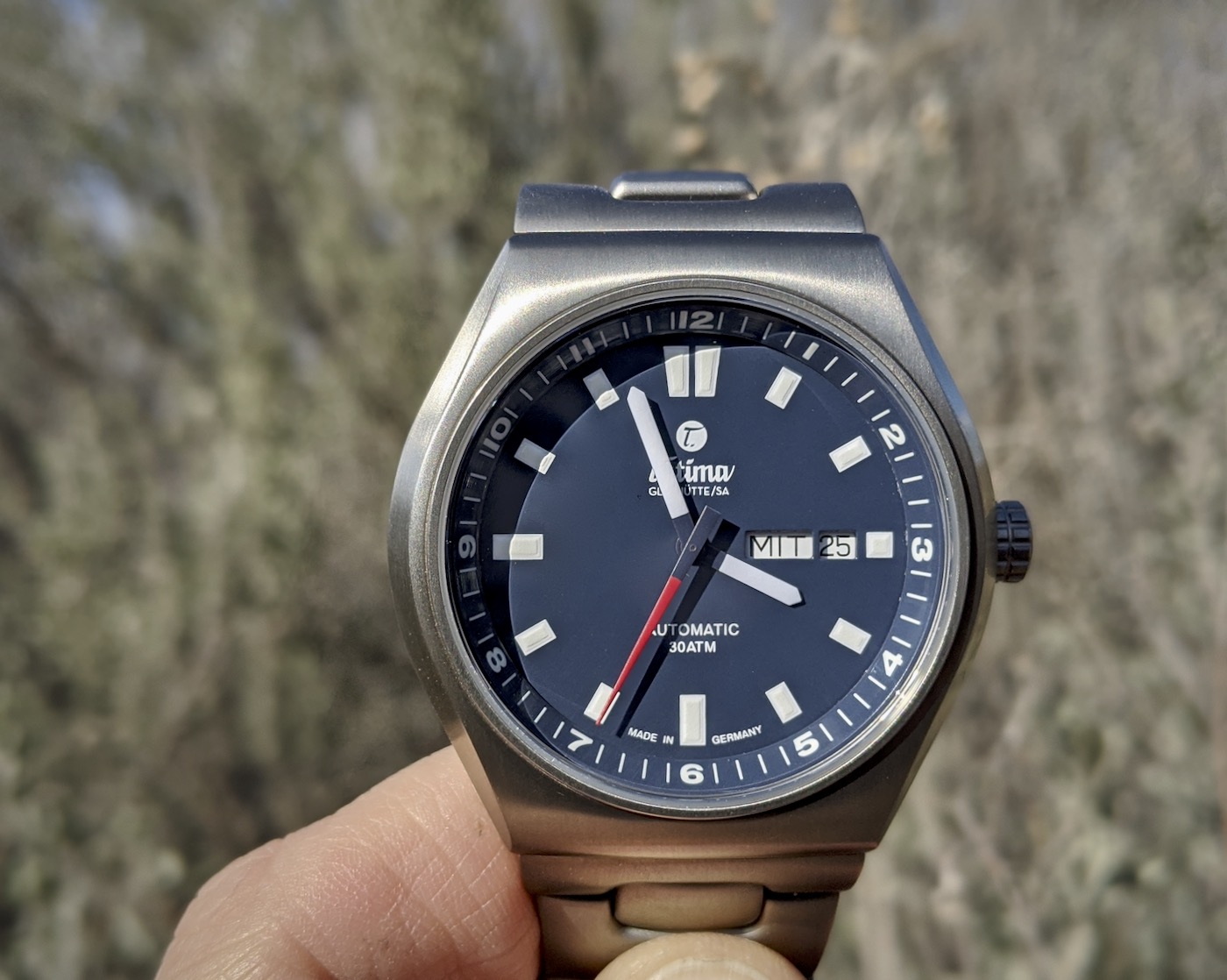 Tutima chose to craft the M2 Coastline from titanium, a decision I completely agree with. Given the somewhat chunky design, stainless steel on a bracelet would have been quite heavy for extended wear. By constructing the watch from titanium, the result is a light timepiece — but not so light as to feel insubstantial on the wrist, as some titanium watches do. The overall effect is a Goldilocks feel that is comfortable for all-day wear, but still feels reassuringly solid.

After a few weeks of wear, I’ve become quite fond of the case on the M2 Coastline. The case shape is relatively simple and will be familiar to fans of German chronographs; this is a style that Tutima has embraced throughout its history and feels very much on-brand and recognizably Tutima. The soft lines, satin finish, drilled lugs, and screw-down crown are all well-executed and exude the attention to detail you’d expect from a watch out of Glashütte. Other welcome features of the case include 300m of water resistance, a flat sapphire crystal, deeply engraved decorated caseback, and screw-down crown. 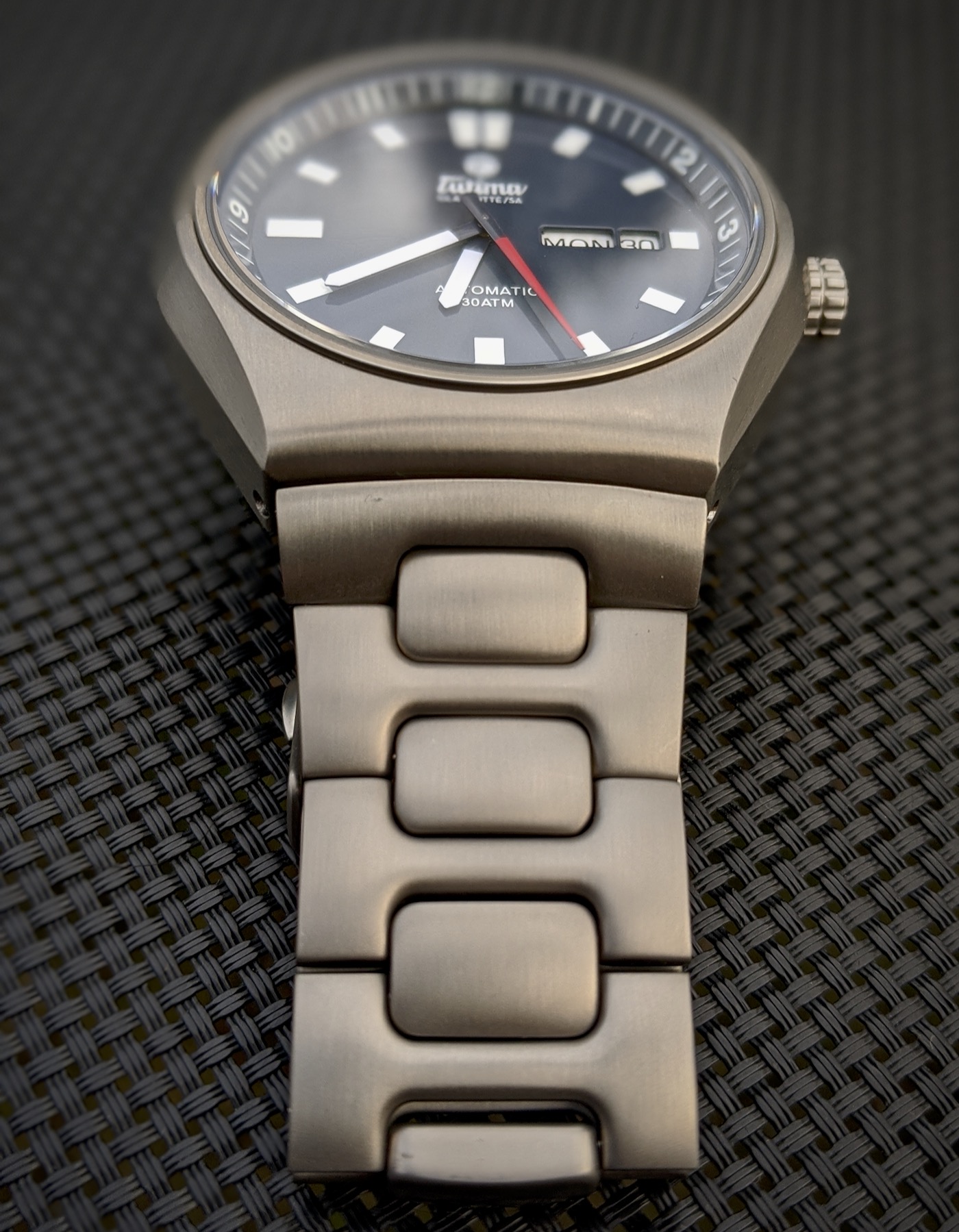 You really can’t talk about the case of the Tutima M2 Coastline without talking about the bracelet. Integrated bracelets are en vogue for 2020 and, while the Tutima M2 Coastline’s bracelet isn’t integrated, you’d be forgiven for thinking it was. The end links engage with the lugless case seamlessly, transitioning into an extremely comfortable 20mm H-link bracelet that will be instantly familiar for fans of German watches like Sinn. Personally, I love both the style and comfort of H-link bracelets, so this was a hit for me, especially when combined with the solid push-button clasp (ahem, Sinn, take note). The bracelet also includes a dive extension, which seems rather unnecessary since this isn’t a dive watch. The clasp does have holes for micro adjustments but, of course, on-the-fly adjustment would be welcome. If you’re not a fan of bracelets, the Coastline is also available on a customized leather strap that integrates with the case shape. That said, if you like bracelets, this is the way to go. I typically enjoy swapping out straps and trying a variety of looks, but the Coastline simply looks complete on the bracelet, and I’ve never had the urge to wear it any other way. 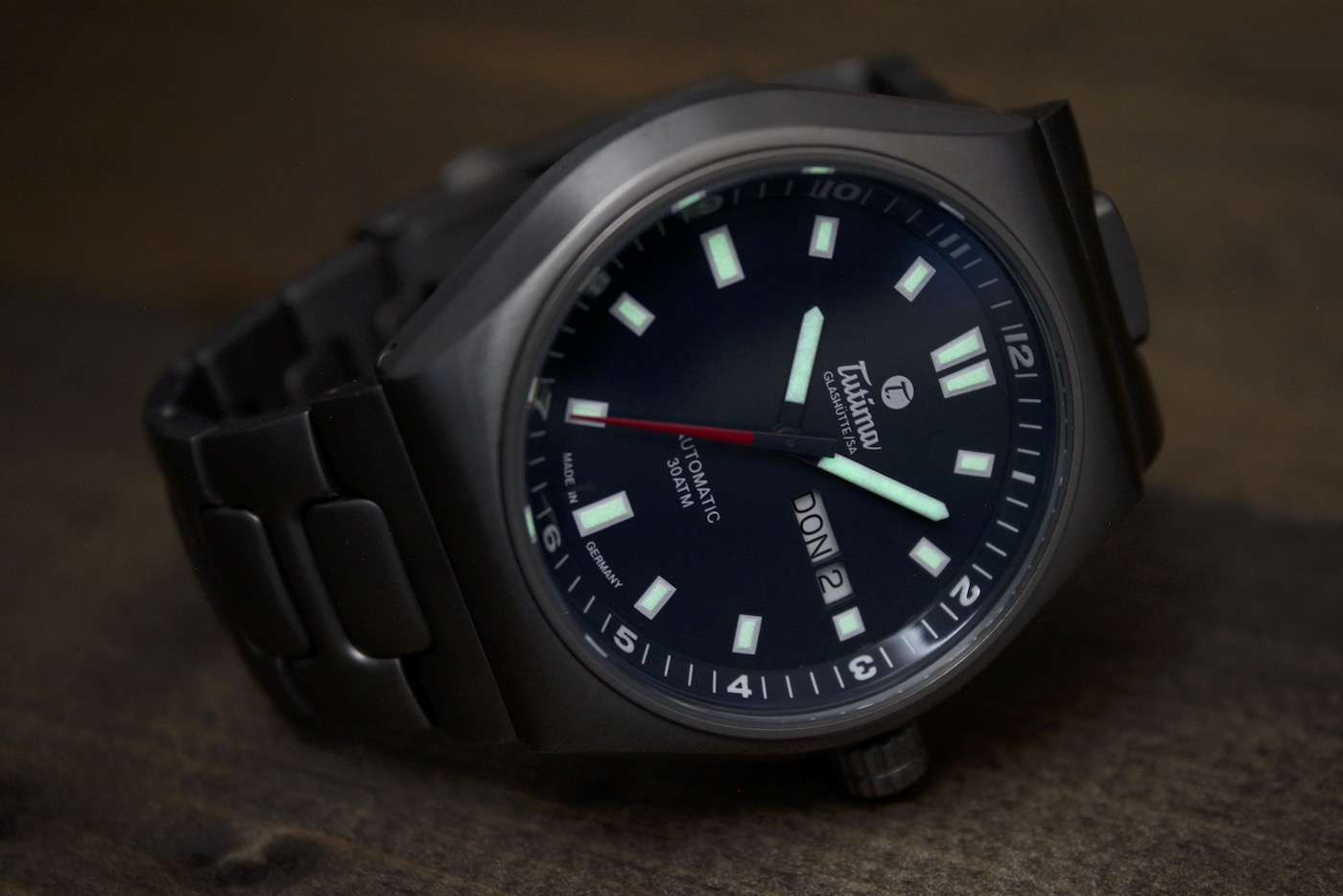 The M2 Coastline comes in either a blue or anthracite dial. Both feature white handsets with Super-LumiNova and a punchy red seconds hand. The blue dial is deep and, in fact, when I first opened the box under dim lighting, I thought I had been sent the anthracite version instead. But hop out into bright light and the dial pops. The result is a versatile dial that doesn’t call undue attention to itself but provides a bright pop when the light hits just right. The dial itself is simple, with rectangular hour indices and day-date windows at 3 o’clock. A color-matched date wheel would have been nice, but the white is inoffensive. Along the periphery, a sloping rehaut includes the minute markers and Arabic hours and is a shiny contrast to the matte dial. Overall, I find the dial attractive, versatile, and well-executed — hard to ask for much more.

Things do fall a bit short (sorry for the pun) when we get to the handset. The hour and minute hands are slightly thin compared to the width of the markers, but the bigger issue is that the minutes hand feels too short. I personally think the hands would feel more proportional and be more legible if the minute hand stretched to the edge of the dial and the hour hand were a touch longer in proportion. Not a make-or-break issue, but worth noting. Finally, the red seconds hand is a matter of taste. Some will love the pop of red, but I would have preferred a simple white seconds hand, or the option of one. 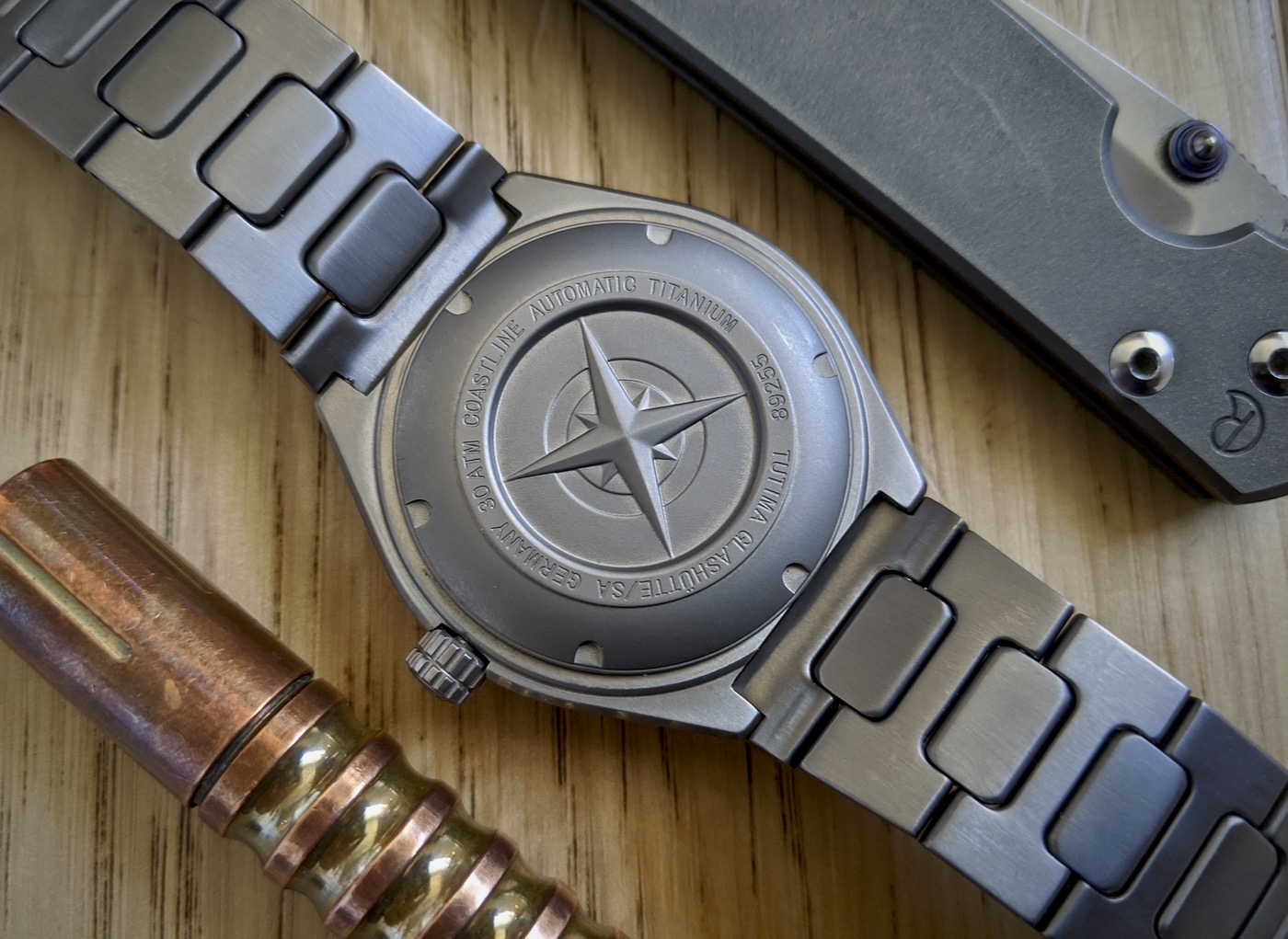 Beating inside the Tutima M2 Coastline is the Cal. Tutima 300, a modified version of the ever-reliable ETA 2836-2. Much like its more ubiquitous sibling, the ETA 2824-2, the automatic movement beats at 28.8kbph, features a 38-hour power reserve, and has an 18k gold seal on the custom rotor. Unlike the 2824-2, the Cal. Tutima 300 features both a day and date complication. Prior to the COVID-19 lockdown, I always preferred a date complication, but didn’t have much need for a day-date complication. Now it’s a different story, and I use the day complication more than I care to admit. Note that the day complication can be set to either English or German. Personally, I like to keep it set to German as a nice reminder of the watch’s origins.

When thinking about alternatives, it really depends what aspect most attracts you to this watch. I’ll stick with Germans and offer two suggestions. First, if you’re a fan of the hidden lugs and simple three-hand format, then the Archimede Outdoor Protect is worth a look at roughly half the cost (€960). Available in several colorways and featuring a surfaced-hardened case and bracelet, 200m water resistance, and a smaller 39mm case, the Archimede provides similar aesthetics — I’d consider them cousins rather than siblings — and functionality, albeit with more of a field watch vibe. On the other hand, if you’re a fan of titanium and H-link bracelets but are after more of a rugged tool watch with a timing bezel, then I’d have to suggest the Sinn T2B. Sadly, the T2B was recently discontinued, so you’ll have to be quick if you want to pick one up. 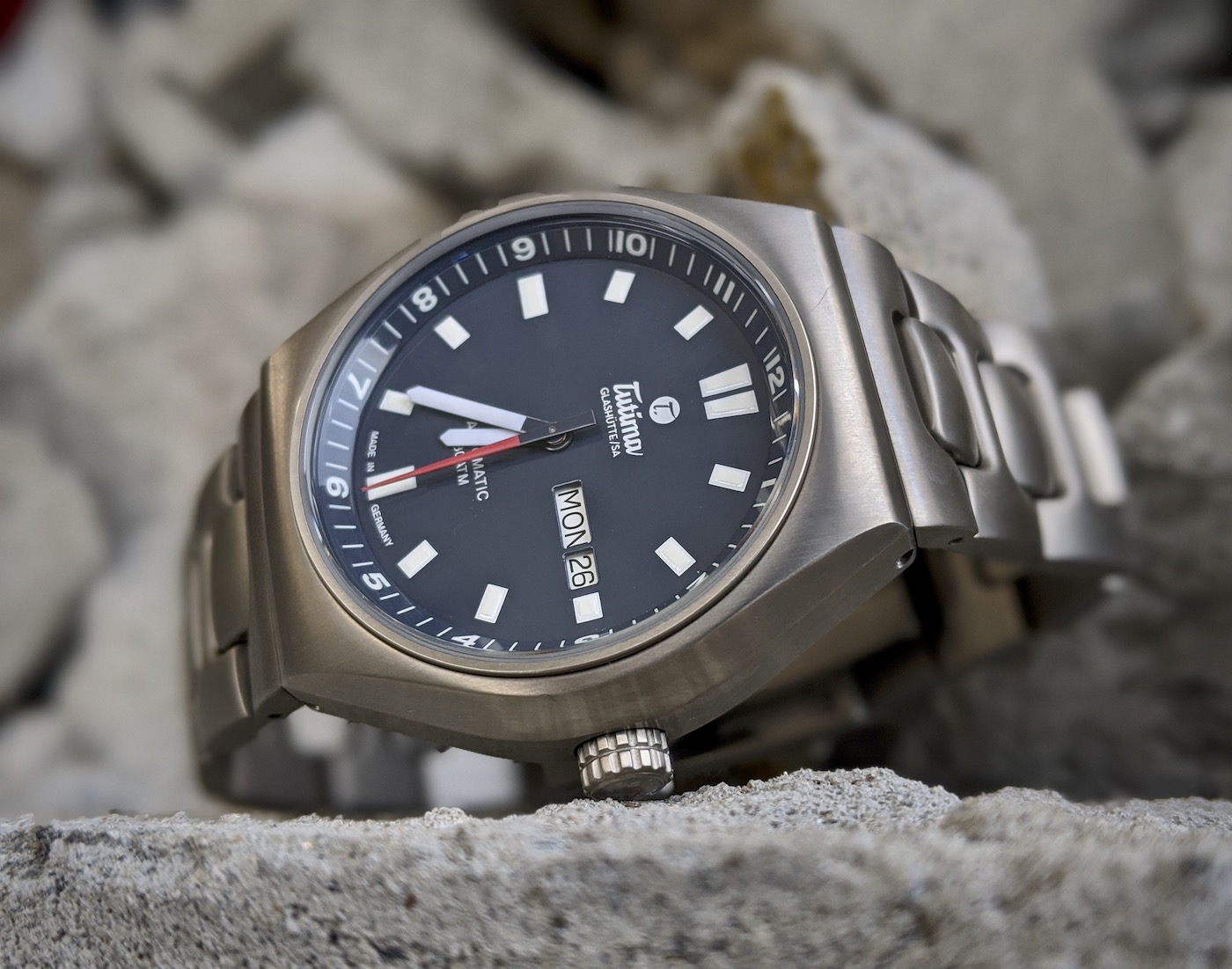 I’ve long admired the aesthetics of Tutima watches, but this was the first chance I’ve had to spend quality time with one on the wrist. Simply put, it’s charming. While German watches, including Tutima, are often best known for being rugged, function-first tool watches, the Coastline forgoes the pretense of being purpose-built for adventures that almost none of us will ever undertake. Instead, like the name implies, the Coastline is made to be worn anytime, including trips to the beach or pool (you know, the kind of adventures most of us actually go on). Sure, 300m is overkill, but it’s a watch you can slip on and wear day-in-day-out and simply not worry about. I’ve become besotted with the case shape and how the bracelet integrates seamlessly with the hidden lugs — it’s a beautiful and uncommon design but one that’s eminently functional and comfortable. It’s not an inexpensive watch, but given the excellent build quality and unique design, it’s certainly worth considering if you’re in the market for an everyday, everywhere watch and are similarly charmed by the aesthetics of this small Glashütte brand. The Tutima M2 Coastline retails for $1950 and more information can be found at www.tutima.de.

Necessary Data
>Brand: Tutima
>Model: M2 Coastline
>Price: $1950
>Size: 43mm-wide, 12.9mm-tall, ~44mm lug-to-lug
>When reviewer would personally wear it: Anytime I’m looking for a go-anywhere casual watch.
>Friend we’d recommend it to first: A fan of Genta-esque watches with integrated bracelets who’s not quite ready to commit to never changing straps, or anyone who’s looking for an off-the-beaten-track everyday watch.
>Best characteristic of watch: Case shape and integration with the bracelet.
>Worst characteristic of watch: Handset; minute hand could be slightly longer. 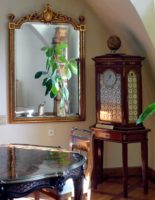 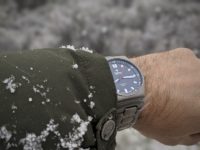 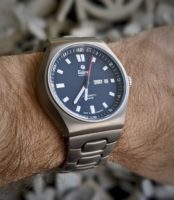 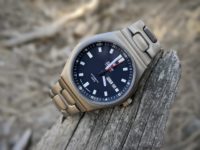 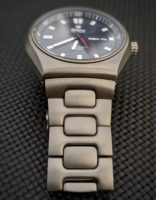 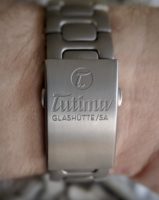 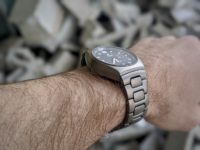 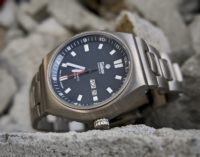 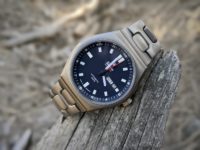 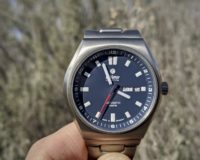