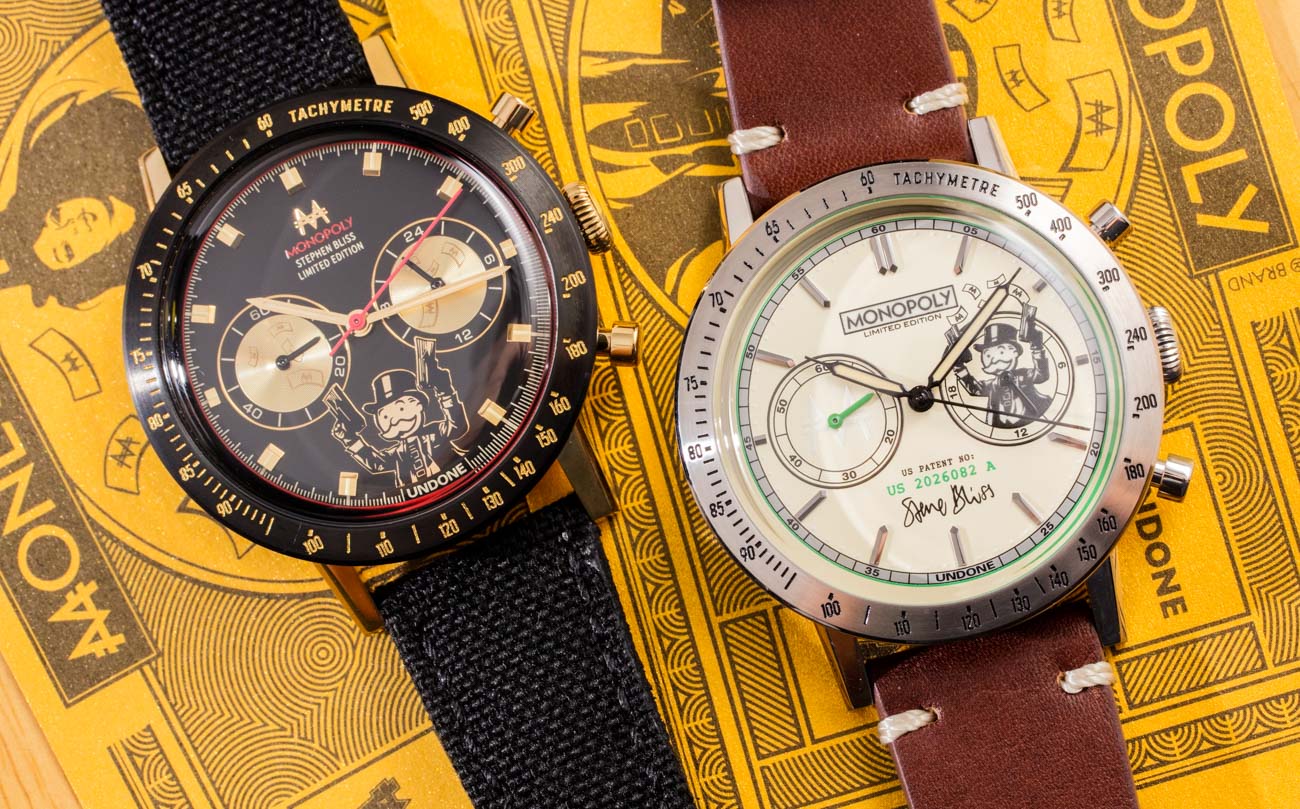 UNDONE warned me before they told me about their upcoming collection of Monopoly watches (aBlogtoWatch debut here), saying, “We aren’t sure if these are for you.” Intrigued by this, I said, “Try me.” It turns out that Hong Kong-based UNDONE not only sought to use a Monopoly game license from Hasbro but also decided to develop these Monopoly watches as a collaboration with famed artist and graphic designer Stephen Bliss (of Grand Theft Auto renown). The result of such as trio of personality (the game, the watch maker, the graphic artist) is not at all immediately predictable. What was released (to start, it seems) is the UNDONE x Monopoly MONEYMAN collection that sees artist Stephen Bliss re-imagine the Great Depression-era character of Uncle Pennybags as an avatar hero of our desires to “make it rain.” 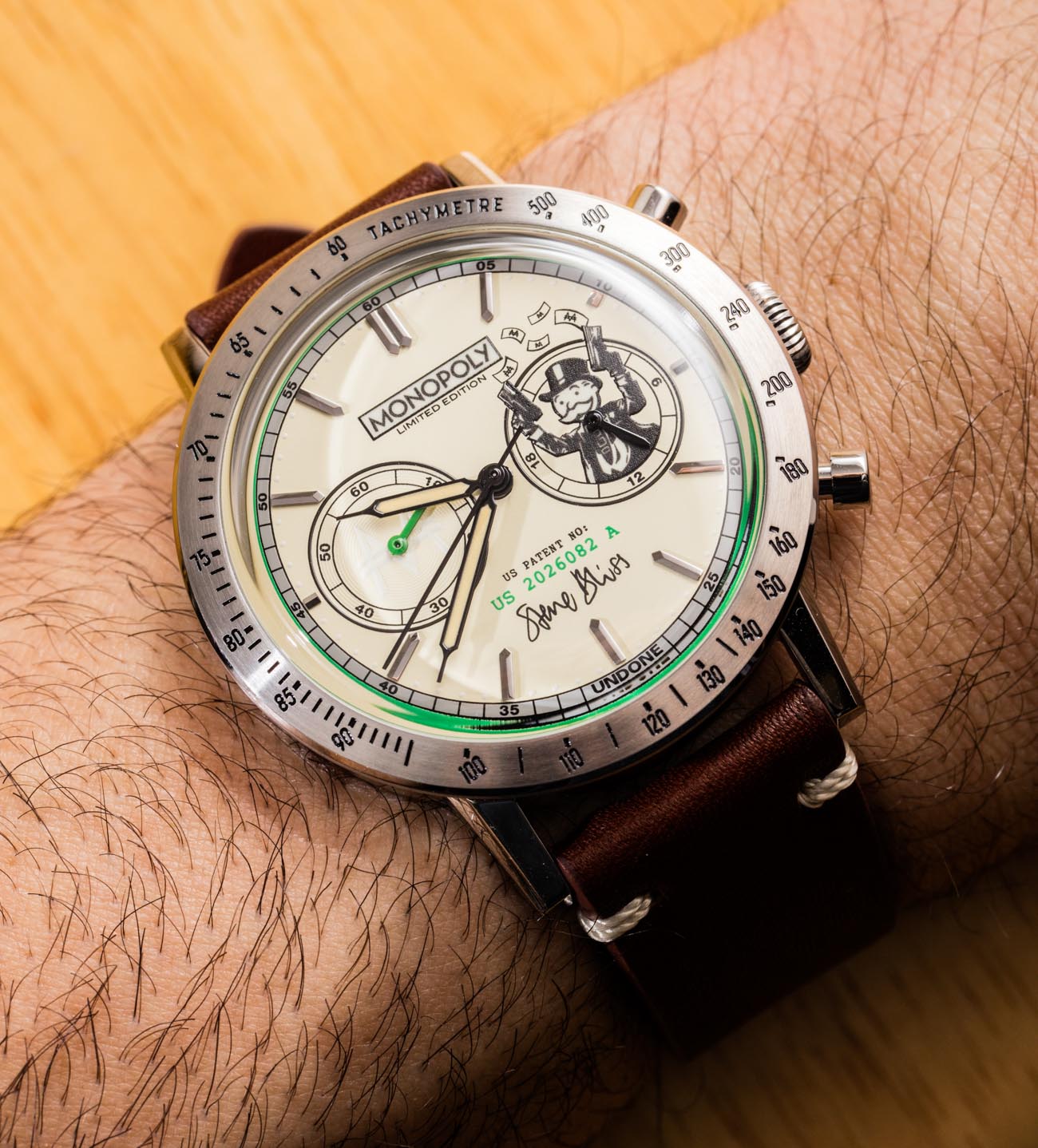 UNDONE was correct in suggesting to me that the Monopoly MONEYMAN watches do not push the horological envelope in any particular direction. These watches do not feature interesting materials, a noteworthy movement, or fit into any celebrated tradition of timepiece design or genre — but they don’t have to. What the UNDONE x Monopoly MONEYMAN watches do achieve is a successful application of contemporary urban fashion and modern pop culture art into the world of decent wristwatch production. There still isn’t too much of that out there, and it’s an emerging field that sees UNDONE join a relatively small community of watchmakers (such as Timex and Casio) who have been working with today’s best urban streetwear brands. Only in this instance, UNDONE didn’t associate with a clothing maker — making their jobs even harder. 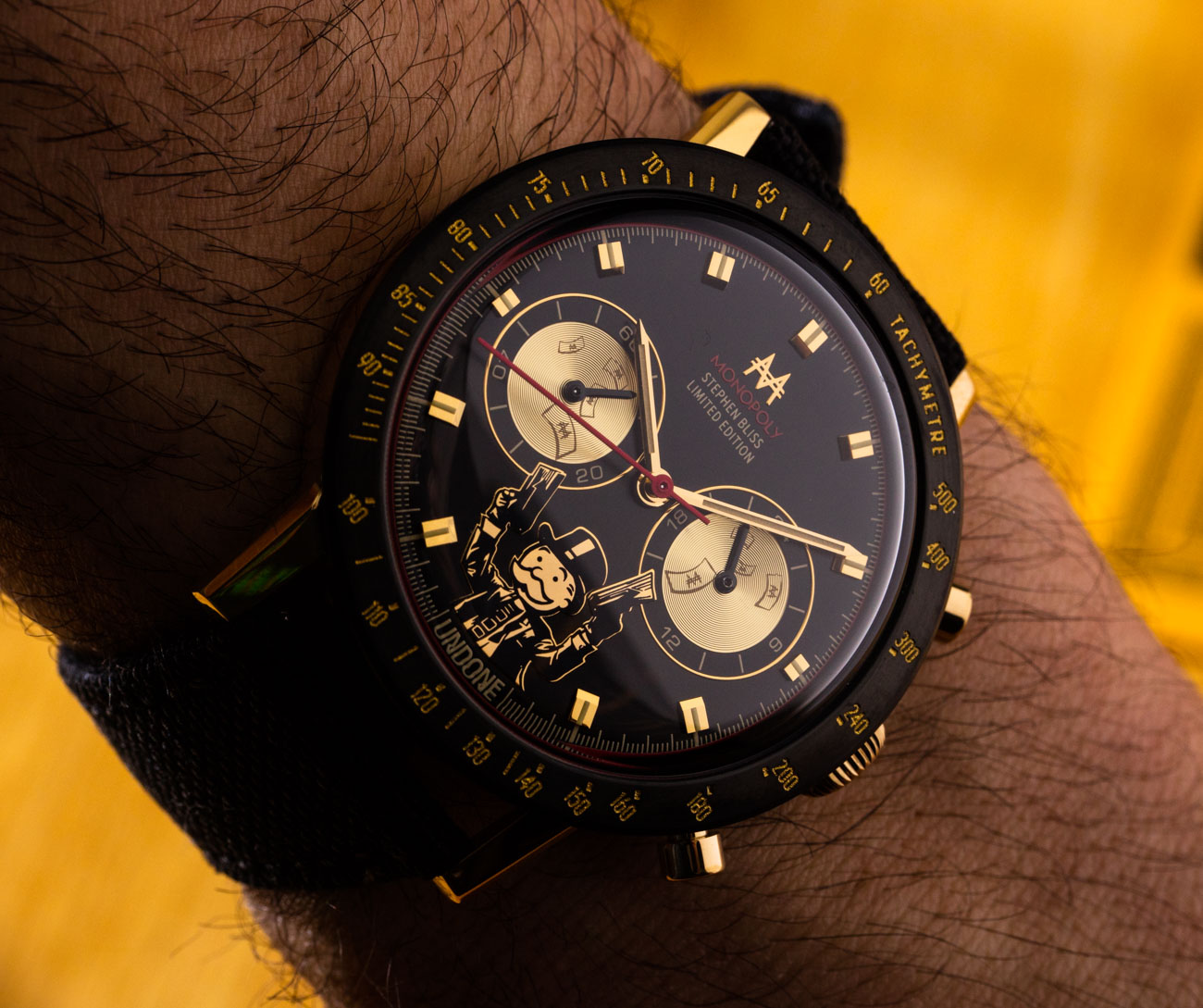 Stephen Bliss did a remarkable job as a creative spirit and graphic designer with the Monopoly MONEYMAN watches. He isn’t a watch designer, so he needed to develop an interesting theme around particular limitations and requirements that allow for a decent watch to be both legible and not attractive. It was also important that the Monopoly watches not look like board game souvenirs (as I don’t think the market for such products would be that large). It was as if UNDONE had approached Stephen and said, “How would you make Monopoly cool and relevant to people who probably don’t remember the last time they played a full session of the game?” A tall order, indeed.

Based upon the UNDONE Urban Chrono watch collection, the UNDONE x Monopoly MONEYMAN watches come in two flavors, each with its own distinct personality. The first flavor is the black and gold with red trim Monopoly MONEYMAN The Godfather. Next is the United States banknote-inspired Monopoly MONEYMAN The Benjamin (easily the more creative of the two pieces). Both watches are handsome and legible as timepieces. The colors are uncommon in today’s assortment of palettes we find in watches, and the overall emotion in the watches (along with the effort) is certainly spirited. 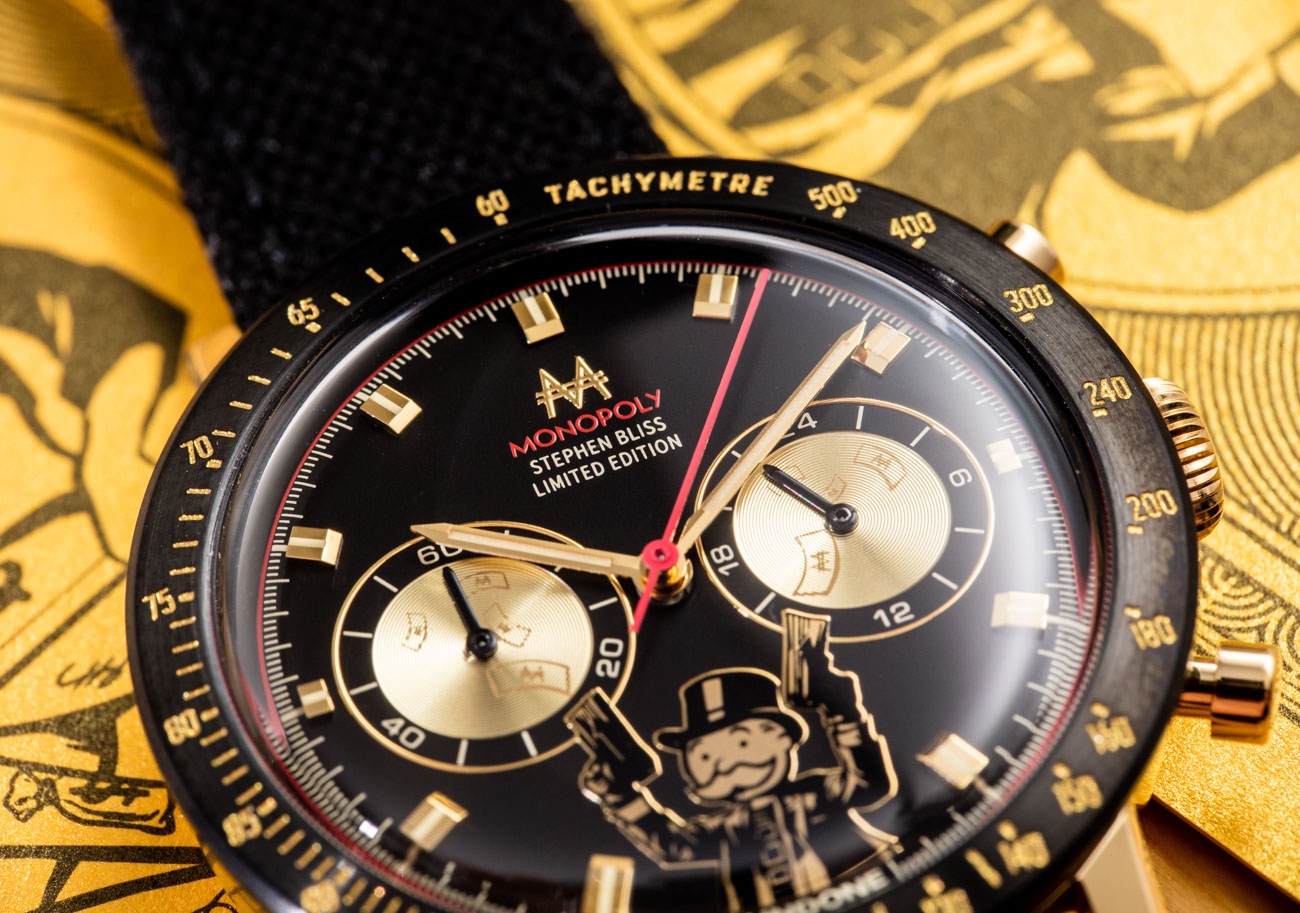 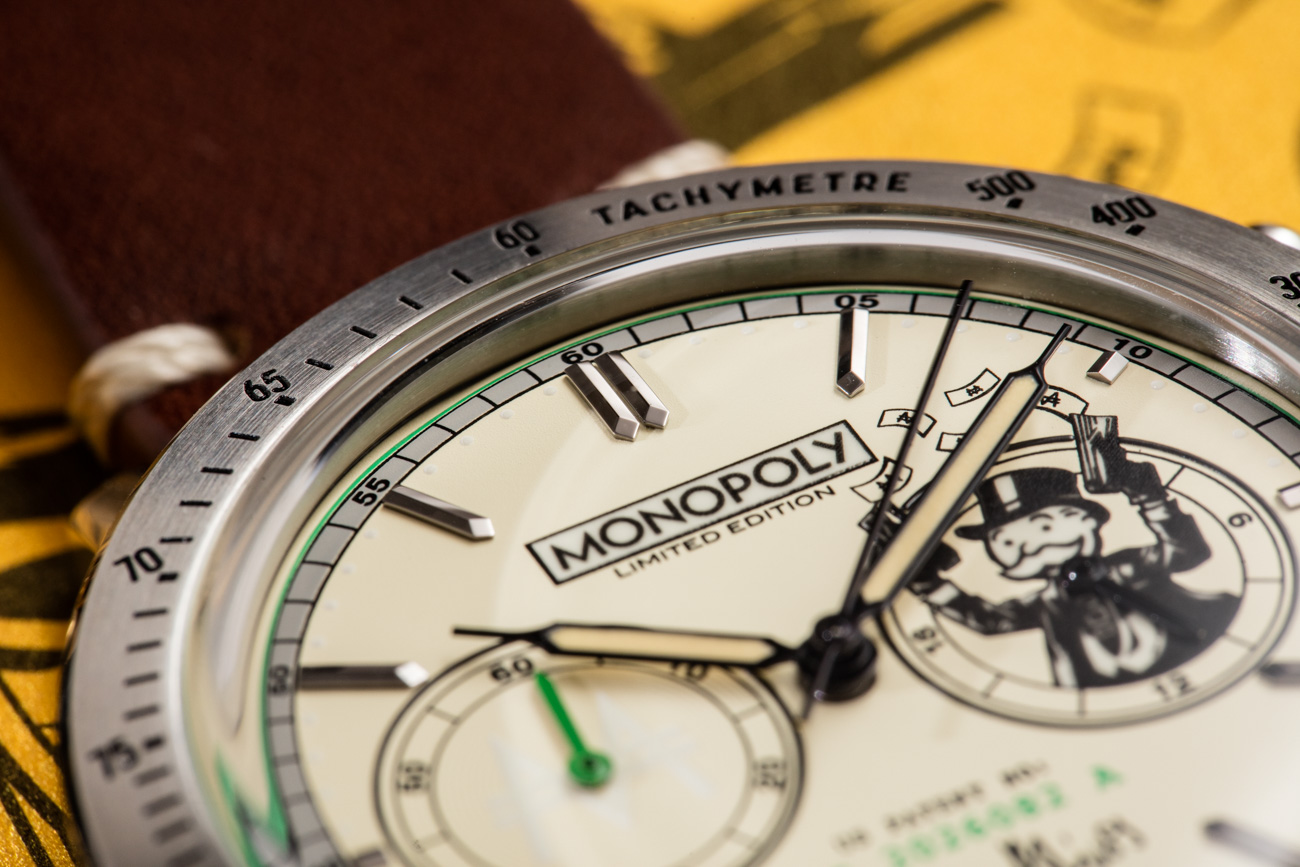 Let me speak for a short moment about today’s urban fashion world — one that not everyone understands (especially as it intersects with luxury). I say this as someone who resides in one of the urban clothing hubs of Los Angeles, viewing all the stores and brands that sell such items, along with the people wearing them. One of the hottest trends in urban fashion is a playful integration of existing pop culture iconography into new graphic design compositions. Such a movement clearly began with personalities such as Andy Warhol, but has really taken on a new life over the last 10-15 years. Pop culture images, characters, and products are routinely used not to celebrate affinity for those particular entertainment or product properties, but as a familiar face, color palette, or aesthetic for novel messaging or fashion purposes.

In this instance, the UNDONE Monopoly watches have almost nothing to do with the Monopoly board game. Rather, the watches use the known Monopoly game and its imagery to make a statement about a contemporary manifestation of the human desire to be successful, to take care of one’s friends, and to conspicuously display wealth.I do not suggest that these UNDONE Monopoly watches are trying to be status symbols. That would imply that they are trying to come across as being luxury items. Such is not the case. Rather, the message here is that wearers see themselves, or would like to see themselves, as successful and bountiful providers. The Godfather watch is for the person who takes care of friends and family (often with money), and The Benjamin is a watch for the person who has enough cash to share it. 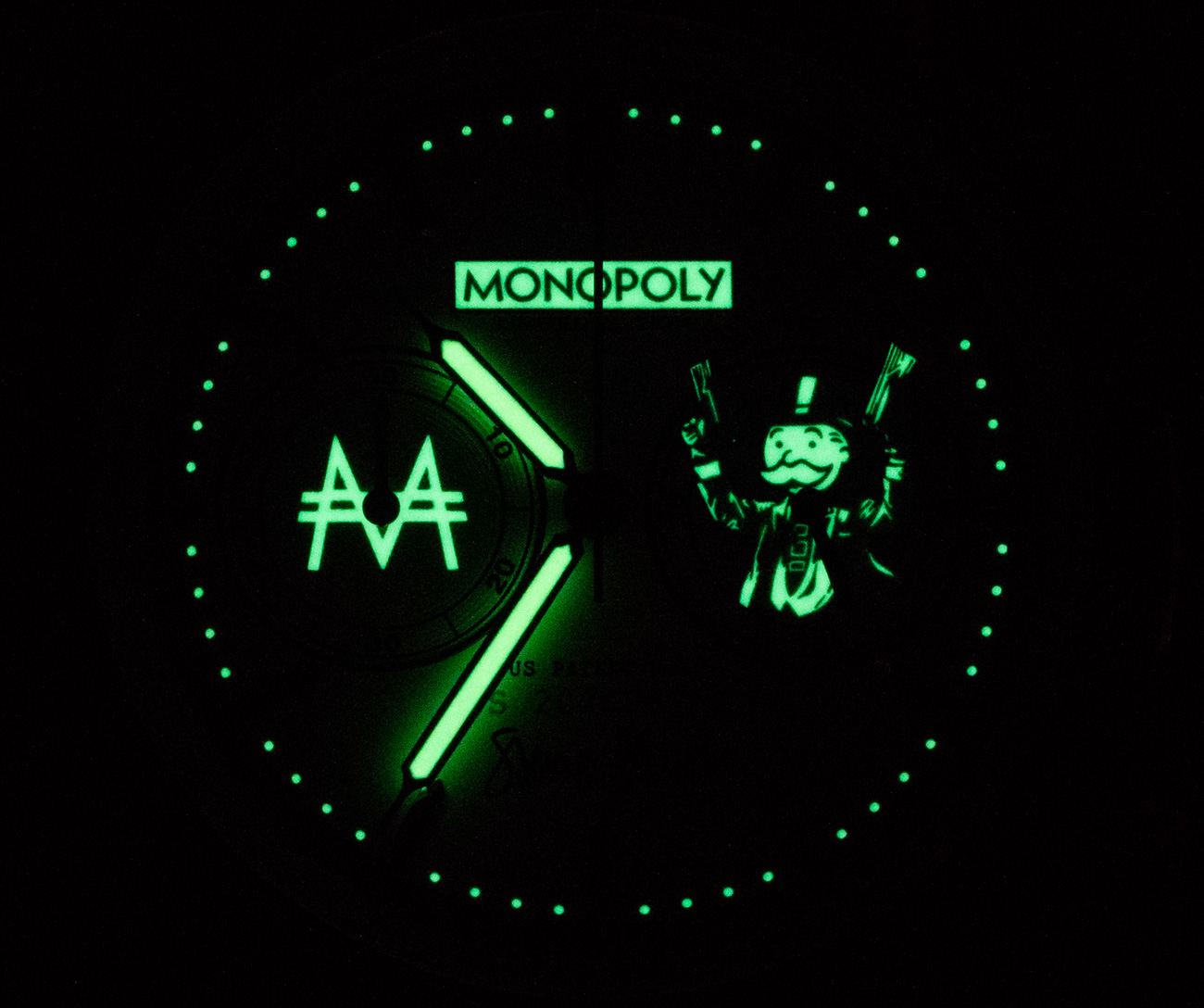 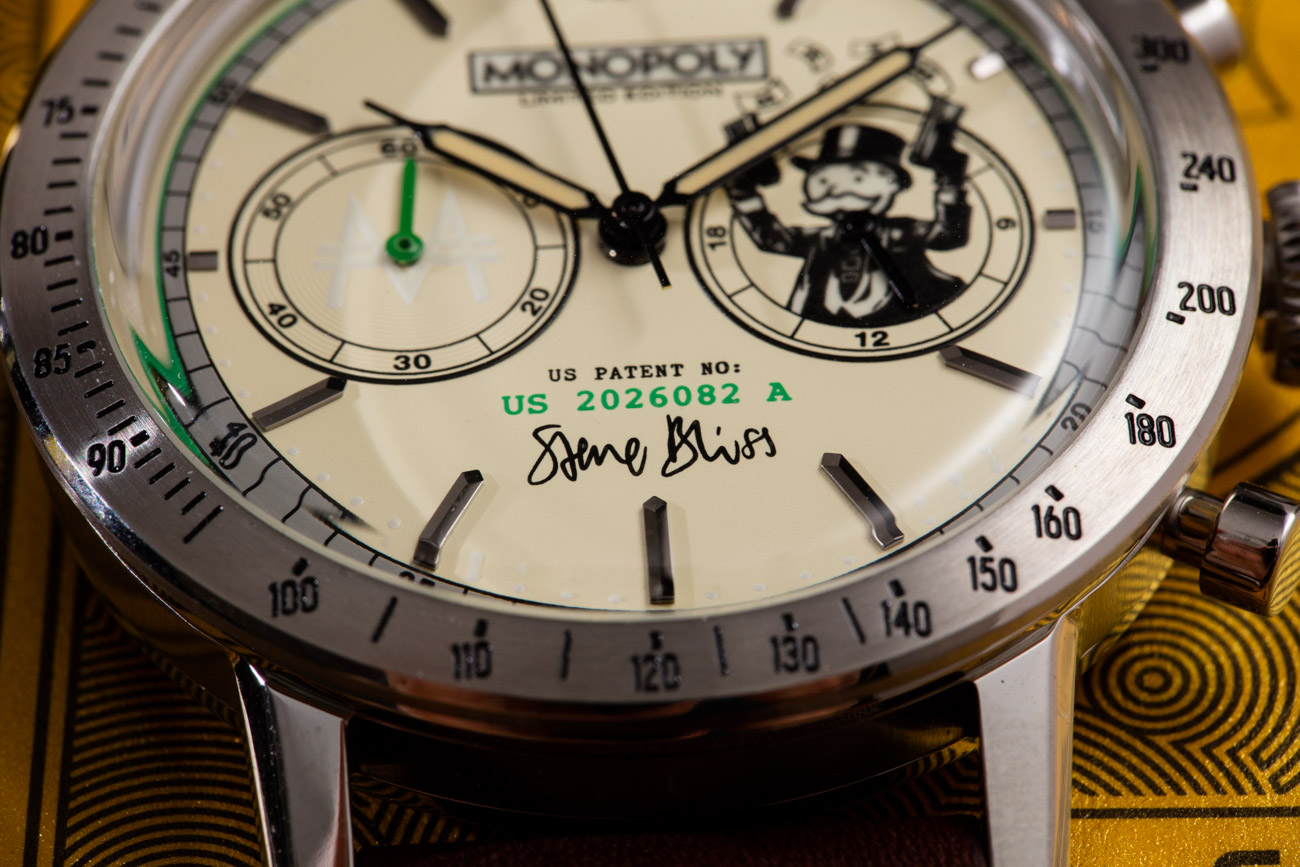 Consider the image of Uncle Pennybags with dual “cash cannons” (pistols that shoot money), which is placed on each of the two watches. This is not a violent display of authority. This is a display of a character who “spreads the wealth” by literally shooting money into the air, without care. All of us at some point in our lives wanted to be that person who could take care of everyone around us. For me, that is what the UNDONE x Monopoly MONEYMAN watches are all about and what I believe Stephen Bliss was going for.

The Benjamin watch is especially creative; it is the first time I have seen a watch dial that is inspired by U.S. currency, and it is done in a satisfying way — certainly not an easy task. Yes, the dials of these watches are inspired by great designs from popular brands such as Patek Philippe and Rolex, but that’s okay. Not only is such borrowing of themes common in urban fashion these days, but it helps the Monopoly MONEYMAN watches look like serious timepieces under Stephen Bliss’ creative layers. 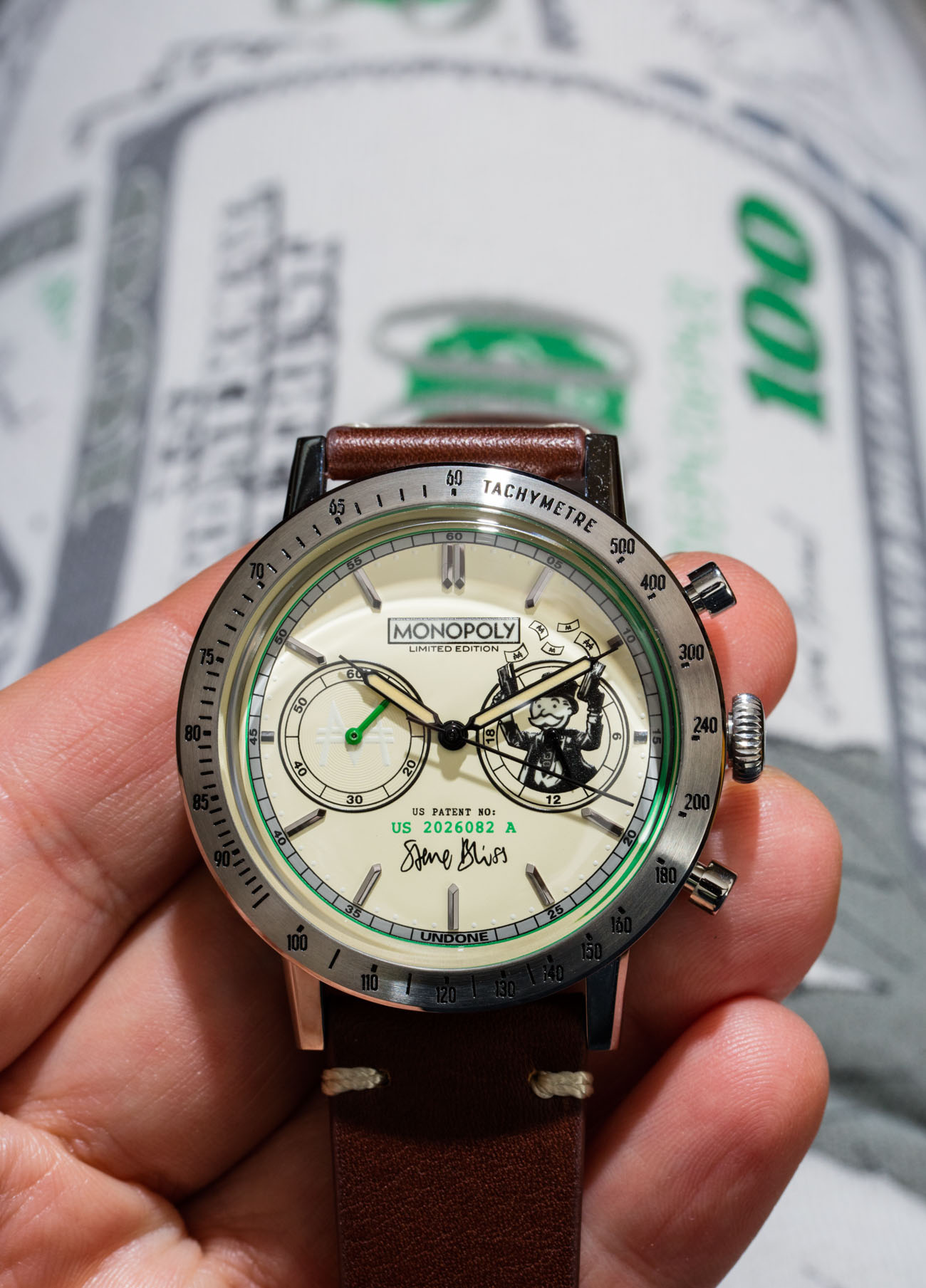 UNDONE tells its own visual story of the Monopoly MONEYMAN watches on its website in a satisfying form for general audiences. The deeper analysis of the meaning of the watches and the design is best saved for a discussion later. For the brand, the exciting elements of these limited-edition watches are the novelty value, the association with the Monopoly game intellectual property and, of course, the collaboration with Stephen Bliss, who helped define an era of video gaming while working at Rockstar Games. The product details continue as UNDONE pairs each watch with one of five random caseback designs and includes unique packaging with each timepiece. What is most interesting for me is that this project resulted in actually neat-looking timepieces I find fun to wear, and that the watches are visually original and emotionally thought-provoking. 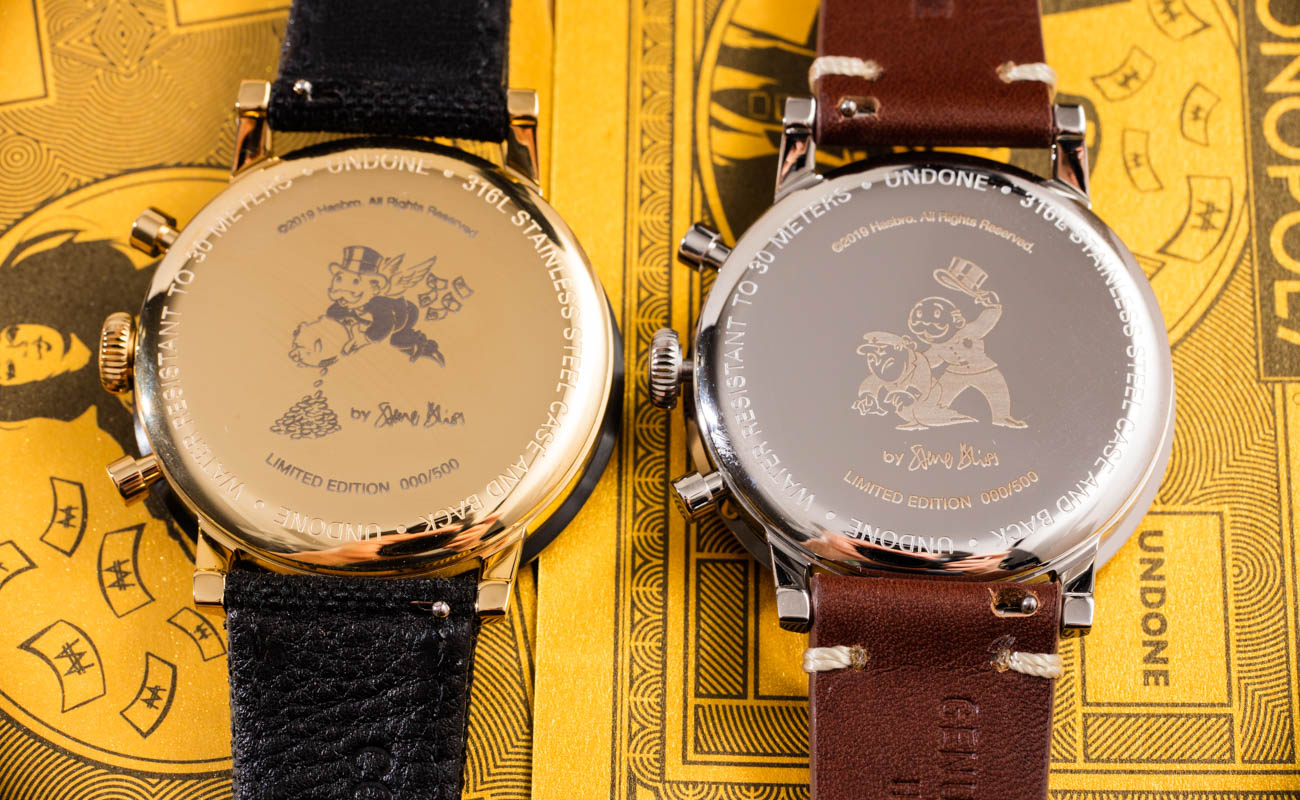 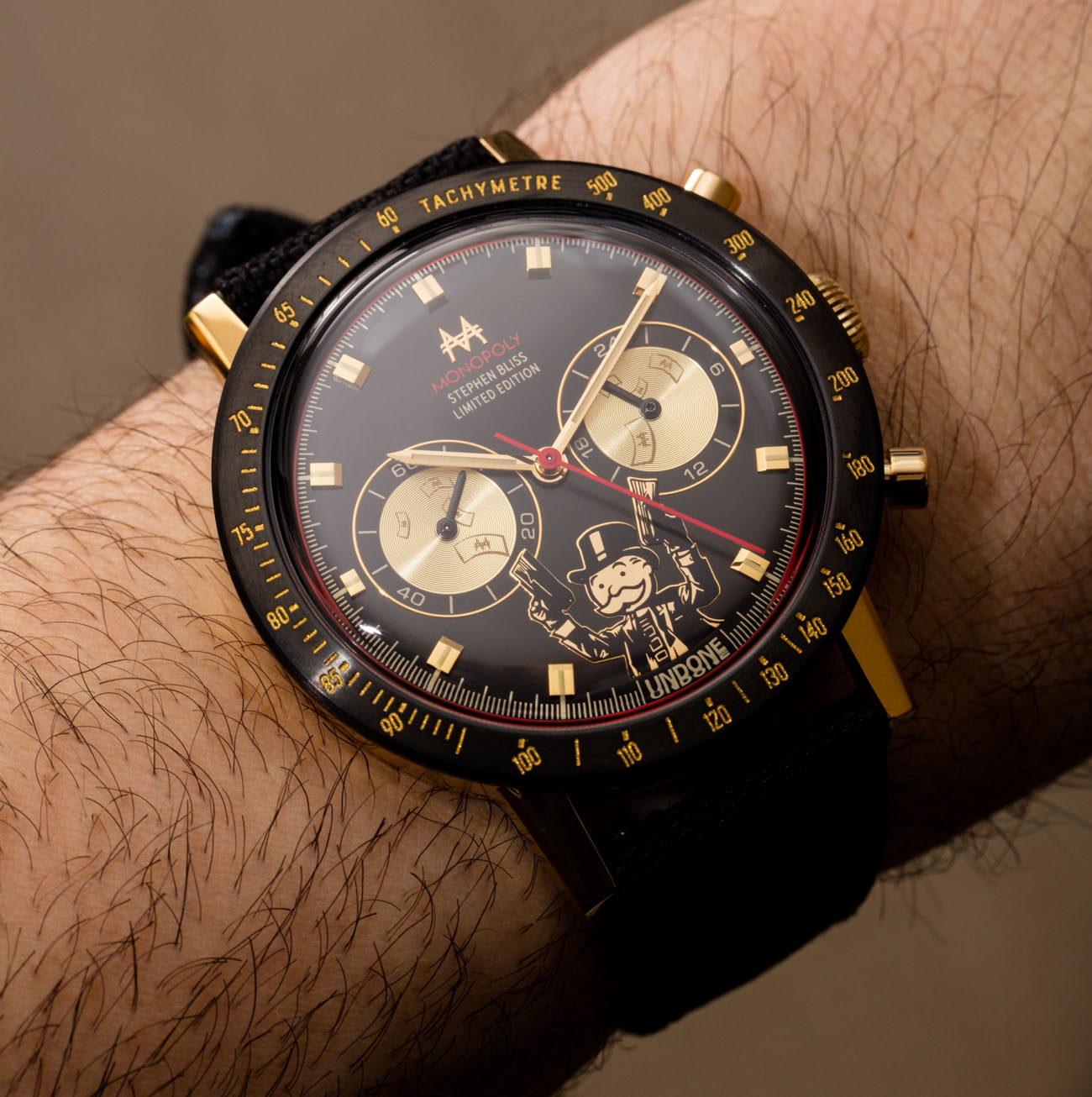 Each UNDONE Urban Chrono watch has a caliber VK64 “mecha-quartz” chronograph movement produced by Seiko Instruments in Japan. The Monopoly MONEYMAN watches have a 41.8mm-wide steel case (in natural or gold and black tones, depending on the model) which is 13.5mm-thick. The Godfather has more traditional dial luminant, but The Benjamin model steals the “night show” with its lumed “M” money symbol and accompanying Monopoly logo and Uncle Pennybags motifs.

As modern art in the vein of urban fashion and pop culture, the UNDONE x Monopoly MONEYMAN watches by Stephen Bliss are certainly noteworthy. As timepieces, they are original and fun to wear. They are also far less expensive than most other similar products in the wristwatch world that are often more directly “luxury” in price. Cost for each of these limited edition of 500 piece watches is more than your typical Undone Urban Chronograph, but understandable given that now two other entities (Hasbro and Stephen Bliss) need to share in the revenue pot (it is a collaboration, remember?), in addition to UNDONE. The watches brought a smile to my face, and I hope that products like the UNDONE x Monopoly MONEYMAN Stephen Bliss will be more common over the next several years. Price for each is $480 USD. Learn more at the UNDONE website here. 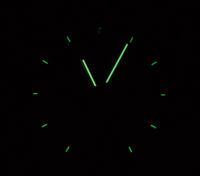 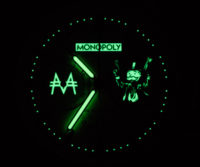 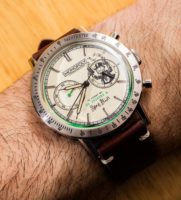 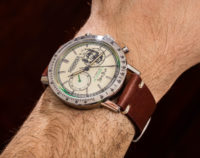 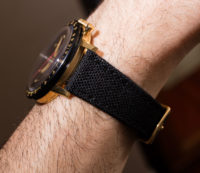 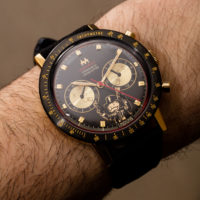 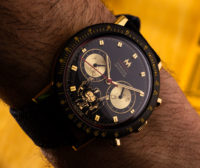