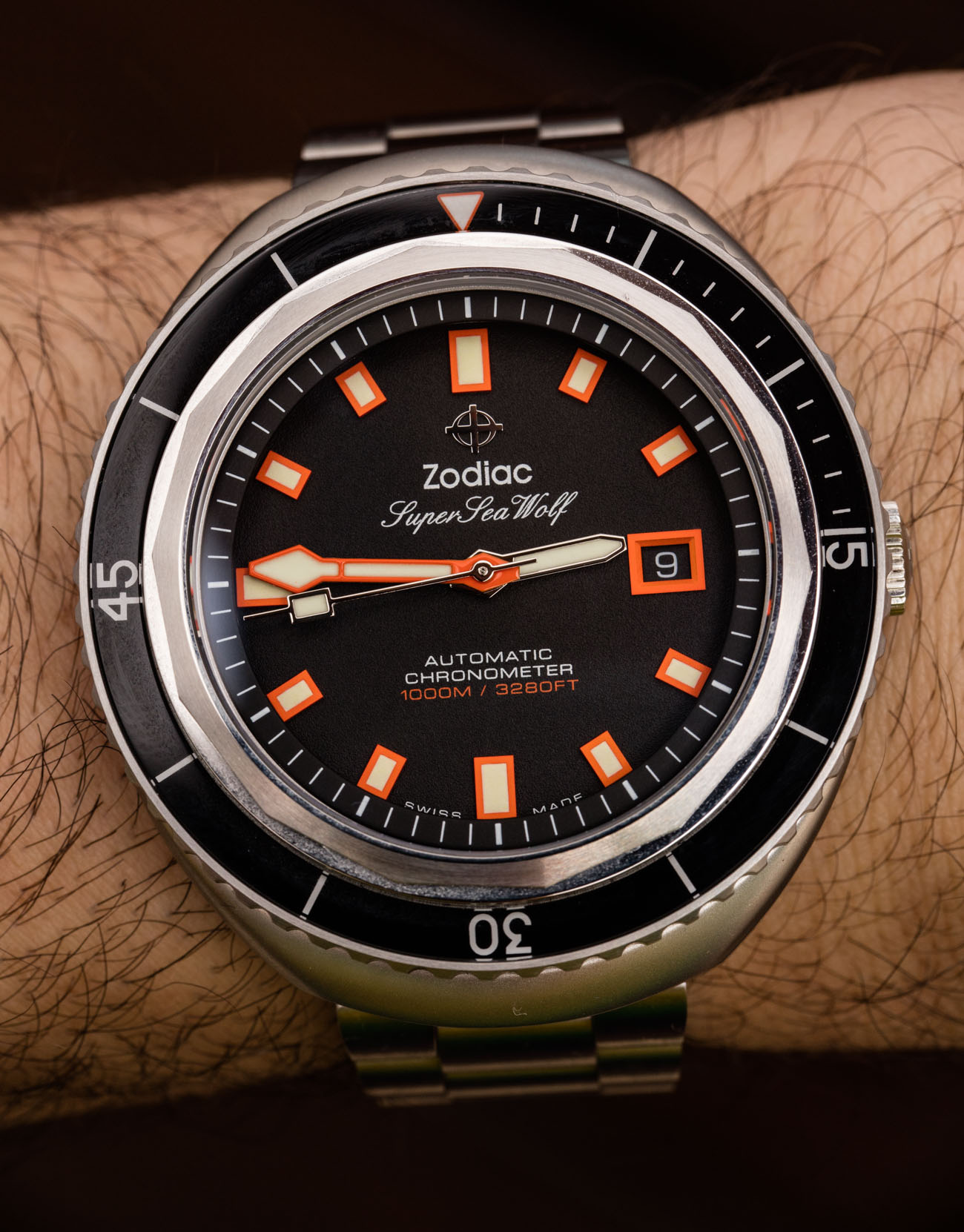 The Zodiac Super Sea Wolf 68 Saturation watch collection isn’t brand new, but for 2020, Zodiac has released my favorite model so far in the collection with the Super Sea Wolf 68 Saturation reference ZO9509. Internally at Zodiac, they call this Super Sea Wolf 68 watch the “blaze,” given its fiery orange hour markers and minutes hand. The heat is certainly up on this traditional-looking diver’s-style watch with its “liquid hot magma” markers that add some welcome personality. Actually, according to Zodiac’s design team, the orange colors on this and other Super Sea Wolf 68 watches that came before it (this is just my favorite model with the tone) are inspired by orange-colored reef-dwelling invertebrates such as corals and sea anemones. Another good way of looking at the ZO9509 is as a more accessible Omega Planet Ocean. Both timepiece collections have traditional steel, black, and white diver’s-watch looks with hints of orange and deep water resistance ratings. At not much over $1,500, the Zodiac ZO9509 offers the appeal of this look with its own character for an entirely different audience than the very mainstream Omega Planet Ocean.

A very important part of my appreciation for this particular Super Sea Wolf 68 Blaze isn’t just the dial design but also the bracelet. Given the relatively big 44mm-wide case’s narrower 20mm lugs, Zodiac has found it challenging to pair the case with an appropriate band. The problem is a matter of proportions. This is the second Super Sea Wolf 68 Saturation watch after the Andy Mann ZO9508 to come with a new three-link steel bracelet. The bracelet has a slight taper which matches the tapering case in visuals. The outcome is still a narrow bracelet, but one that feels more harmonious since it mimics the line flow of the case. This is the best bracelet so far for the Super Sea Wolf 68, and it has helped make this Super Sea Wolf 68 Saturation ready as a mainstream watch for the fashionistas along with the tool watch guys. 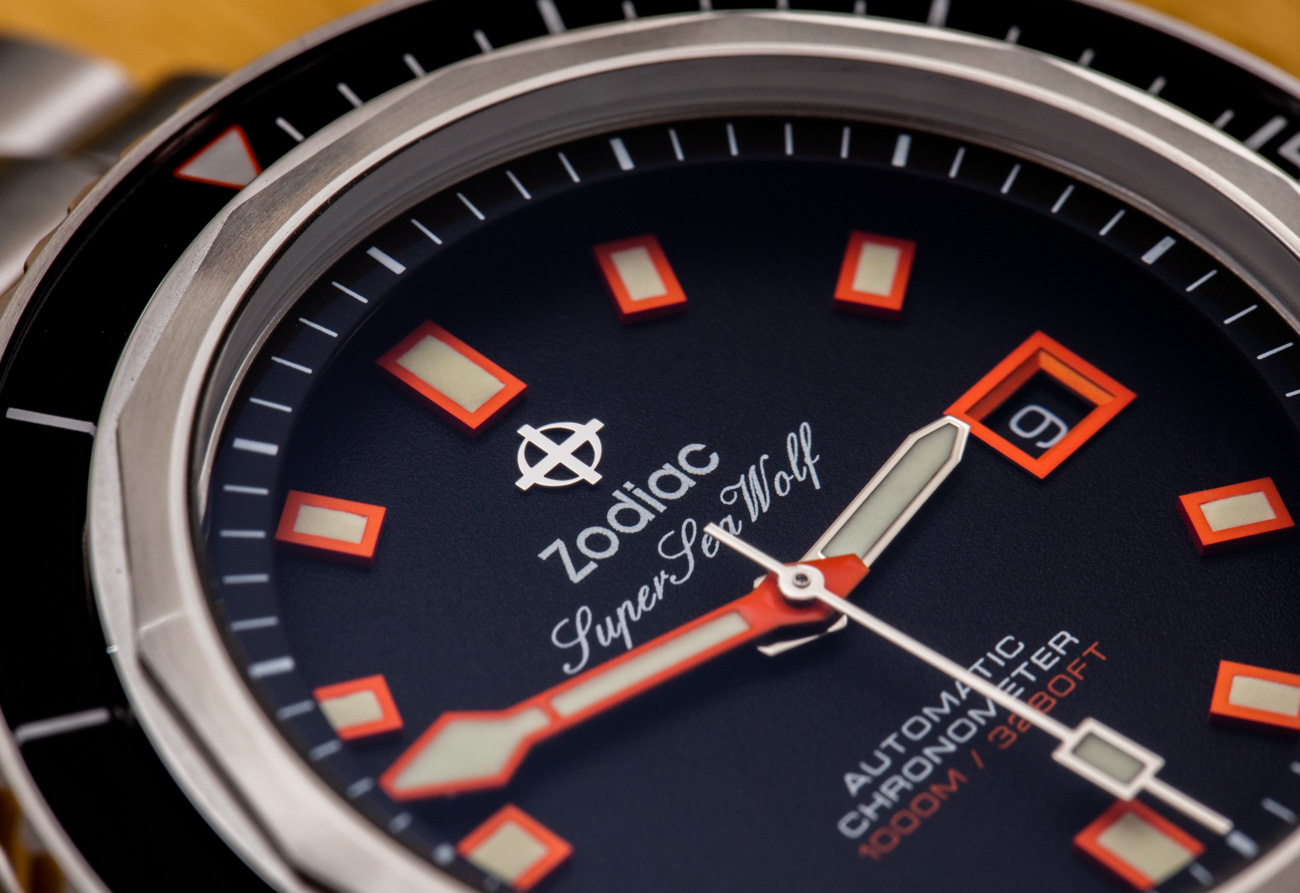 The 44mm-wide case is in satin-finished steel (pretty uncommon, actually) and the bezel is in brushed steel. The tonneau style of the case is distinctive of a subset of 1960s- and 1970s-era dive watches. Each company had its own twist on the theme — including Zodiac. The “68” part of the name refers to the fact that the watch is inspired by original Zodiac Saturation diver watches from 1968. Compared to the Zodiac Super Sea Wolf 53, the 68 has much more water resistance and, of course, a different look. The 16mm-thick case is meant to be water resistant to 1,000 meters. Over the dial is an AR-coated sapphire crystal.

This is the first (or one of the first) non-limited-edition Super Sea Wolf 68 watches to include a COSC Chronometer-rated movement. Until now, only the limited-edition models came with the certificate that helps add value, both real and perceived (the label on the dial), to the watch — a further reason Zodiac watches should be considered a lot of product for the money. Inside the watch is the Swiss-made STP 3-13 automatic movement, which operates at 4Hz with two days of power reserve. A distinguishing feature of the STP 3-13 (also made by Fossil Group-owned STP in Switzerland) is its ability to be more finely regulated by a watchmaker and thus able to be more accurate and serviceable. 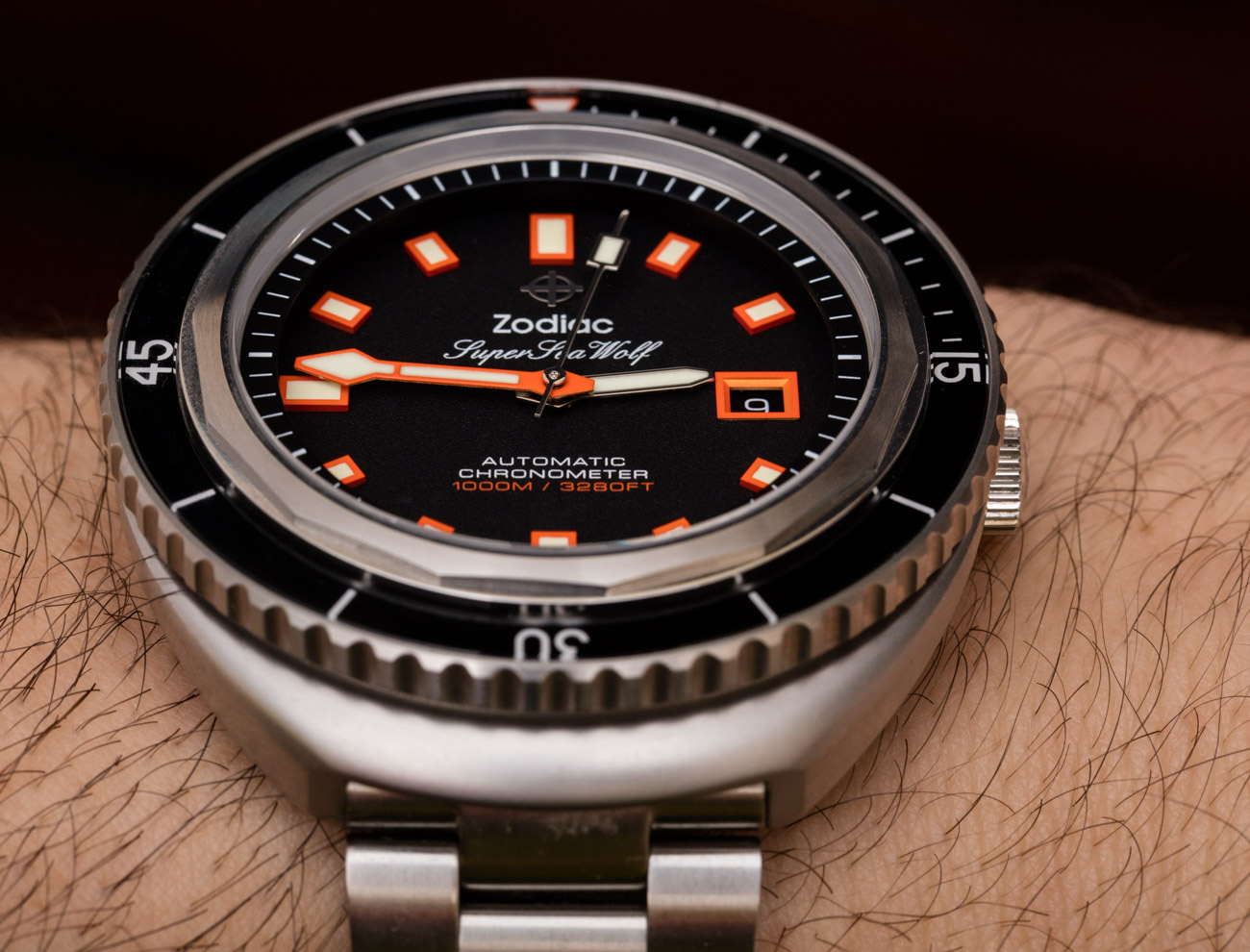 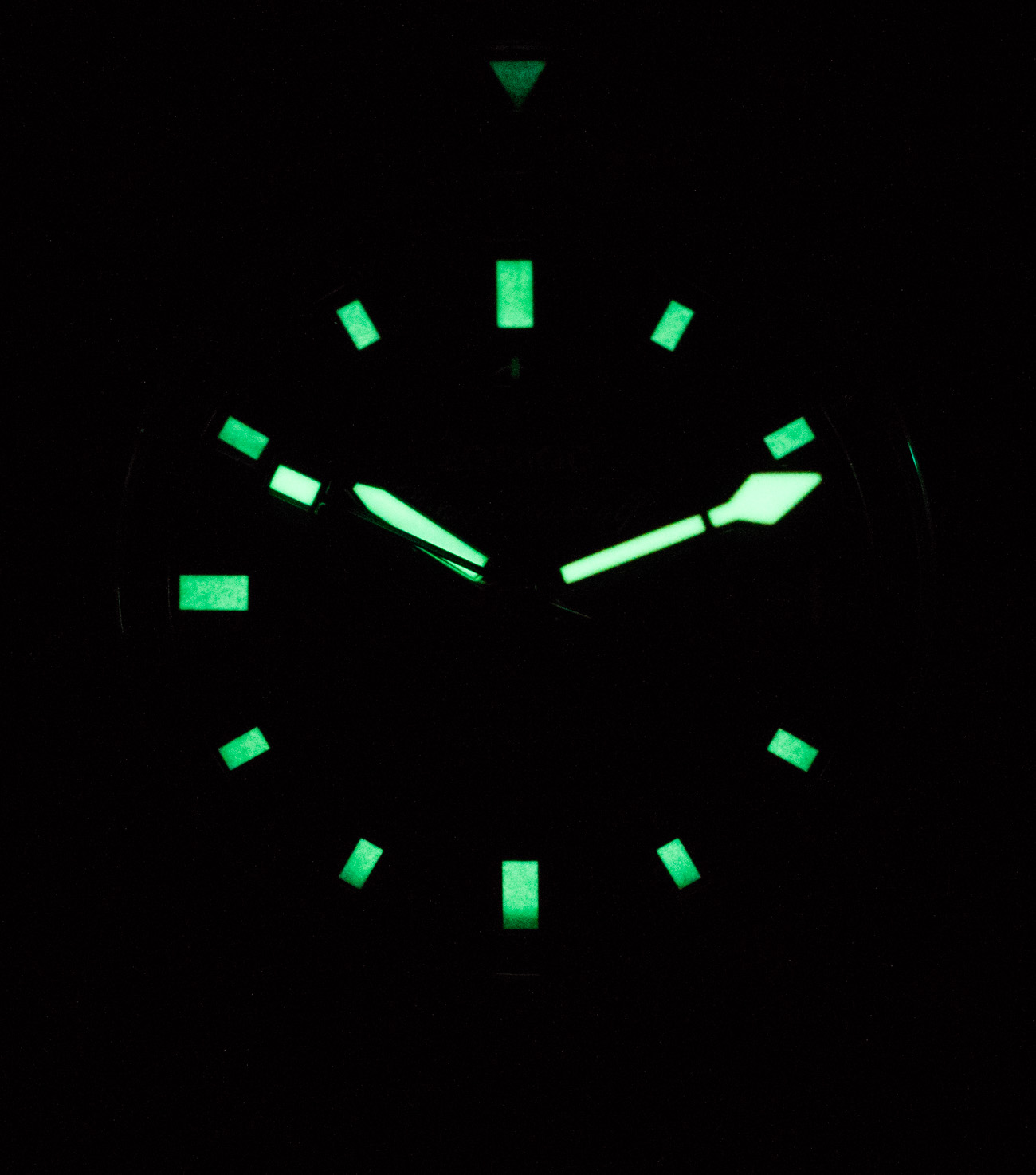 Above, I mentioned that this ZO9509 watch is an extension of a popular but sold-out limited edition Super Sea Wolf 68 known as the ZO9500. It, too, had the same case and dial combination but with a slightly different dial that (for example) didn’t have an orange-colored date window. The ZO9500 also came with a mesh metal versus this more complementary three-link steel bracelet.

Fans of Zodiac can probably see that the ZO9509 is an extension of a similar Zodiac Super Sea Wolf 68 Saturation watch that was a limited edition that is no longer available (because it sold out). Limited to just 82 pieces, the Zodiac ZO9500 was a design the company felt needed more attention. So, they did the smart thing and actually made some material improvements over the limited edition, while producing more pieces of the watch — at a lower price point than the limited edition was sold for. Owners of the original limited edition will be assured that both models have enough differences for each to be distinguished from the other. 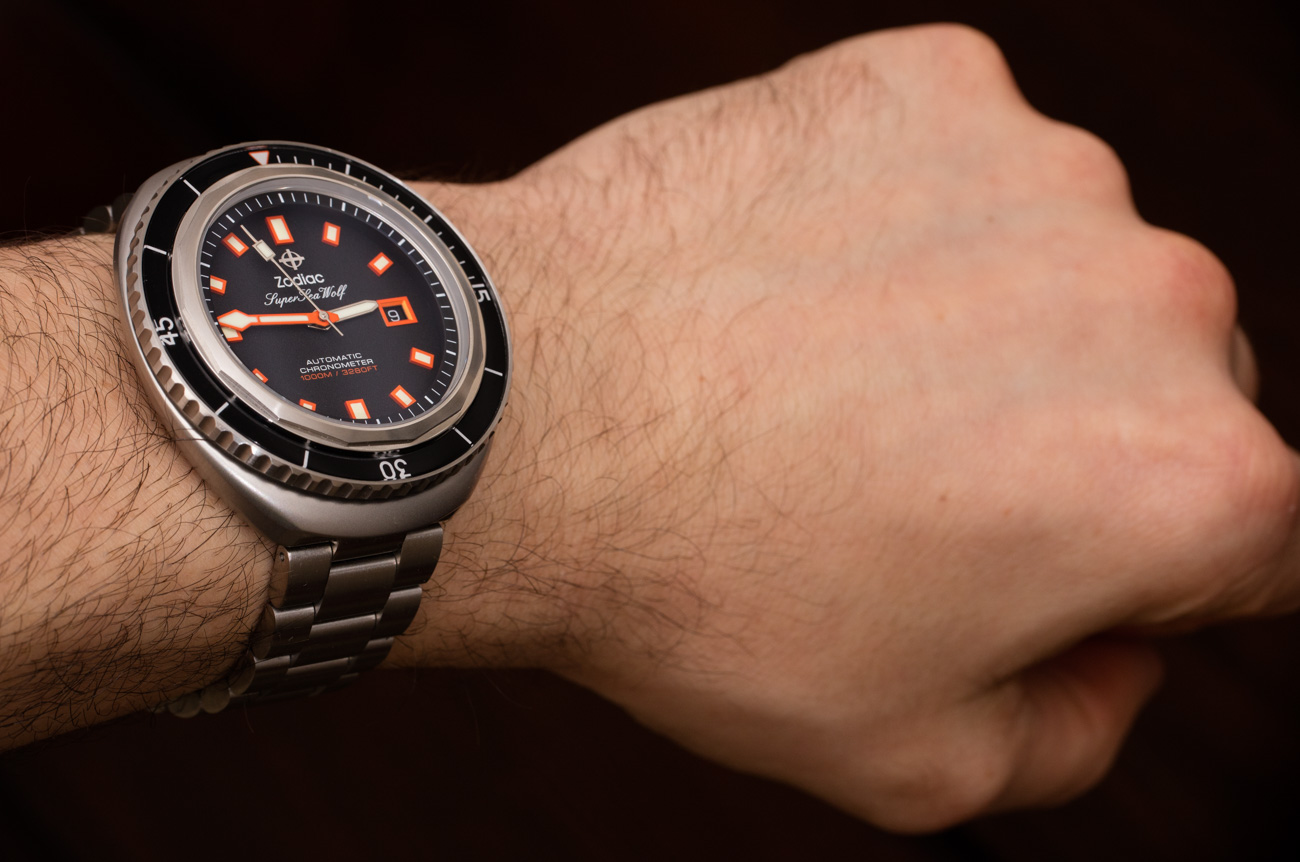 The bracelet is well-made with unique parts and nothing off-the-shelf. It is, however, basic, lacking a fancy micro-adjusting clasp or anything like that, which most more expensive watches have. It is, however, comfortable and a pleasure to wear, as I think it makes the Super Sea Wolf 68 not only more stylish but look visually smaller when compared to wearing the same case on a rubber strap.

The bright orange hues on the dial, set against the backdrop of a very retro tool watch (gotta love the “screw-down” bezel around the crystal as part of this design ethos), make for a contemporary fashion statement. In all, the Super Sea Wolf 68 Saturation is a potent timepiece because it elegantly combines the best of yesterday with the manufacturing quality of today. 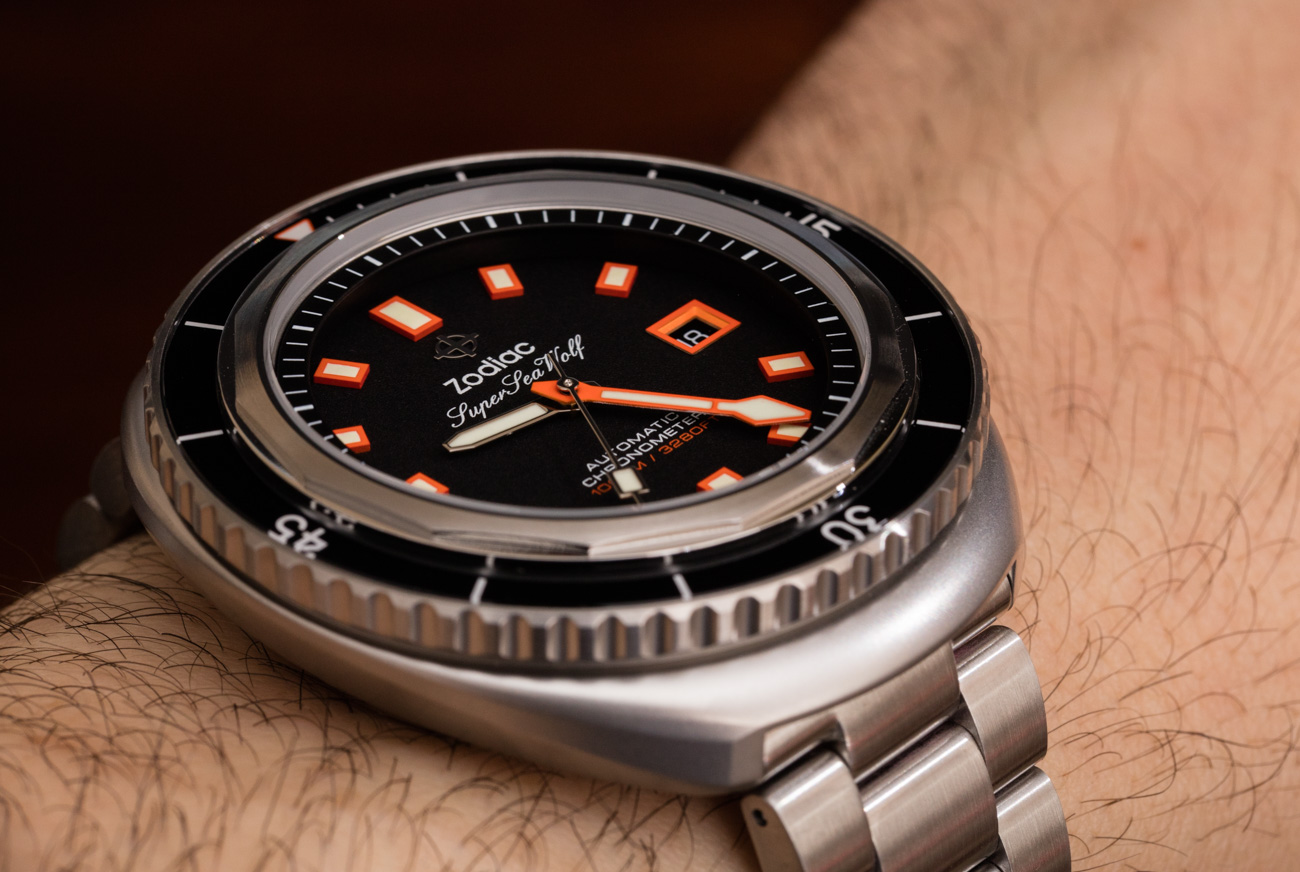 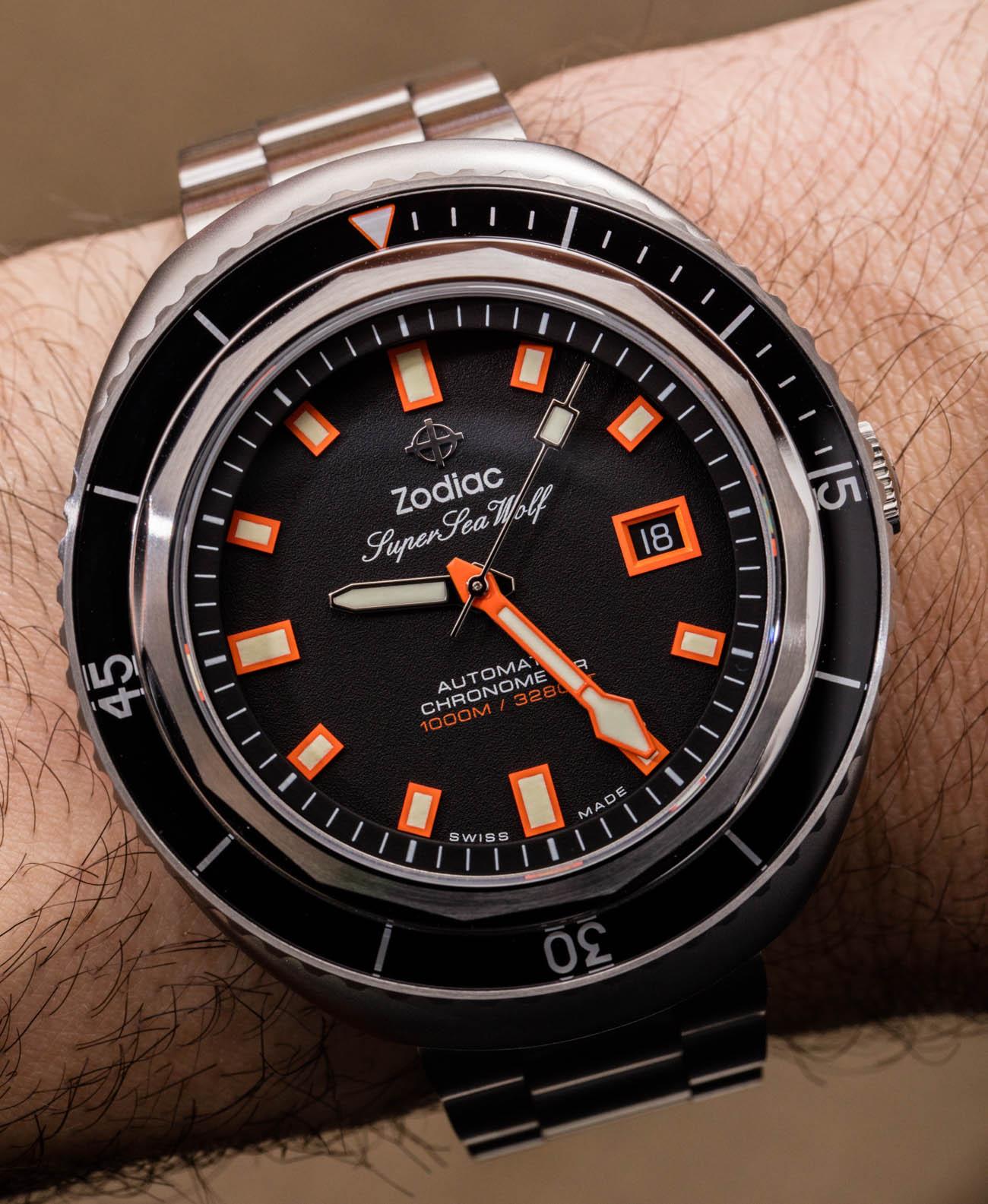 After finishing this review, I realized that I had actually neglected to take images of the watch’s caseback; it simply isn’t that memorable. The caseback is polished steel, bubble style (it protrudes a bit), and has text and an embossed Zodiac logo on it. I think it would have been a nice move for Zodiac to produce the caseback in a satin-finished steel to match the case. The vintage casebacks are all polished as well, but it was like that because it was the cheapest way to make a smooth caseback piece with precise tolerances, as it needed to screw down and keep water out of the case (along with gaskets, of course).

The relatively thin but attractive uni-directional rotating diver’s timing bezel is topped with a mineral crystal and is attractively sparse in design. Now, a small orange border lines the pip at the 60-minute marker. Like all Super Sea Wolf 68 watches, the bezel has a security feature that requires you to press it down before rotating it. 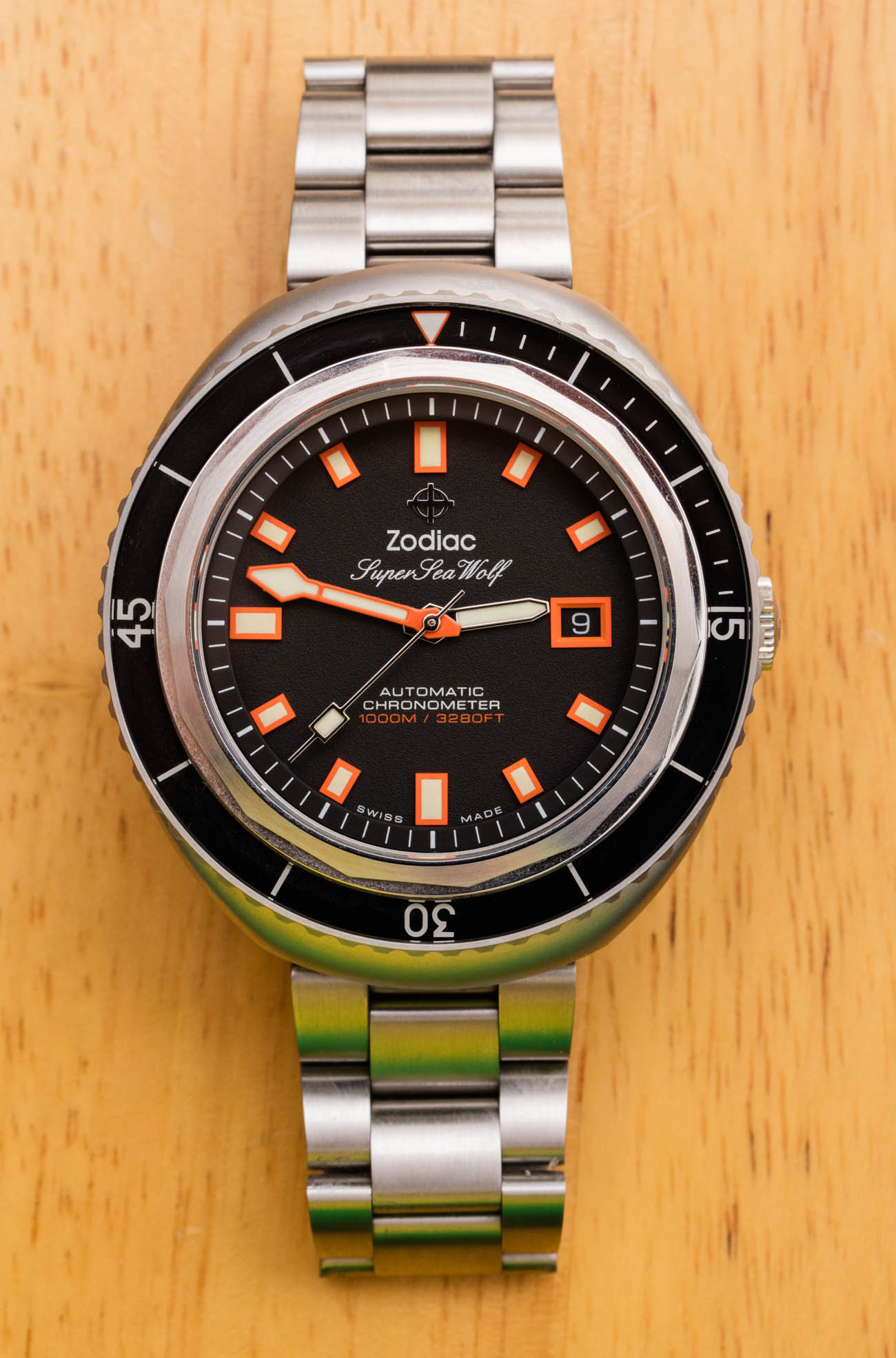 The ZO9509 is among the most mainstream-capable Super Sea Wolf 68 watches the modern Zodiac has produced, and it’s a good thing for the brand, which is strong but also trying to assert itself among other brands at American-owned Fossil Group. Zodiac is its most prestigious brand and it’s working well, but the large company built from the success of fashion watches is still carefully evaluating how to grow a company like Zodiac. At least they aren’t neglecting areas where it really counts — product.

There is enough funkiness for the Super Sea Wolf 68 Saturation to still be a niche or “cult watch,” but in this form, the ZO9509 helps the family of deep diving watches into territory where the Super Sea Wolf 68 now enters the list of options for those wanting a “luxury steel lifestyle watch.” As I said above, Zodiac’s strong point now is that the watch can appeal as much to a “tool watch guy” wanting value as a fashion-motivated wearer seeking something classy and mature, but also slightly attention seeking. Price for the Zodiac Super Sea Wolf 68 Saturation ZO9509 watch is $1,595 USD. Learn more at the Zodiac website here.

Necessary Data
>Brand: Zodiac
>Model: Super Sea Wolf 68 Saturation reference ZO9509
>Price: $1,595 USD
>Size: 45mm-wide, 50mm lug-to-lug distance, and 16mm-thick
>When reviewer would personally wear it: As a classic and also durable daily-wear sporty dive watch with versatility but also a little funkiness.
>Friend we’d recommend it to first: Fan of the 1970s who wants a watch for today that hints at the era more than screams it.
>Best characteristic of watch: Good value when taking into consideration the built quality, durability, movement, and COSC-Chronometer rating — not to mention the competition at this price. Well-manicured design for this particular model of watch case and dial.
>Worst characteristic of watch: Design is not for everyone. Bracelet can still feel narrow for the case size at times. Sits high off the wrist. (It is water resistant to 1000 meters, after all.) A micro-adjust in the bracelet would make it even more appealing. 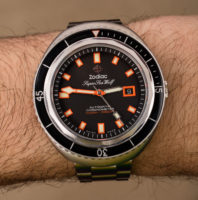 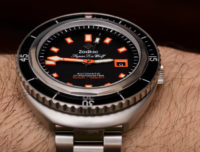 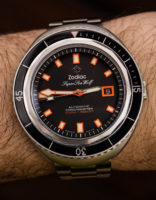 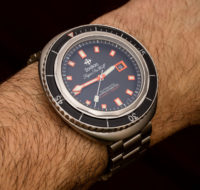 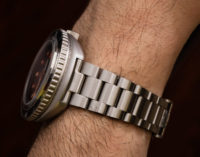 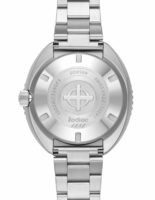 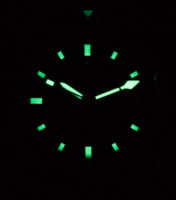 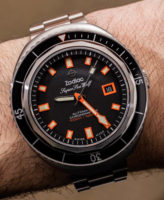 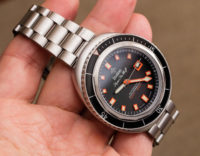